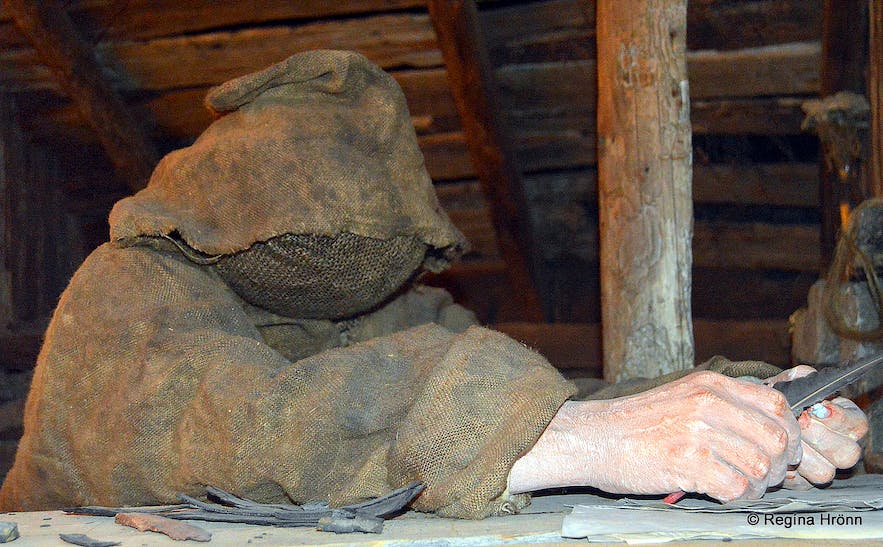 A very popular museum is to be found in Hólmavík village, on the east side of the Westfjords of Iceland, which is a must-visit while in this area. This museum is called the Museum of Sorcery and Witchcraft or "Galdrasafnið" in Icelandic.

The museum is not for the faint-hearted and even though I have visited this museum several times I still get the chills being in there - surrounded by zombies, milk-sucking demons and magical staves. Amongst the many magical staves is the one in my photo below "Angurgapi" - which is one of the most powerful magical staves in Iceland. It looks so innocent that I was amazed that it could be so powerful!

I almost feel uncomfortable having it here in my travel-blog! 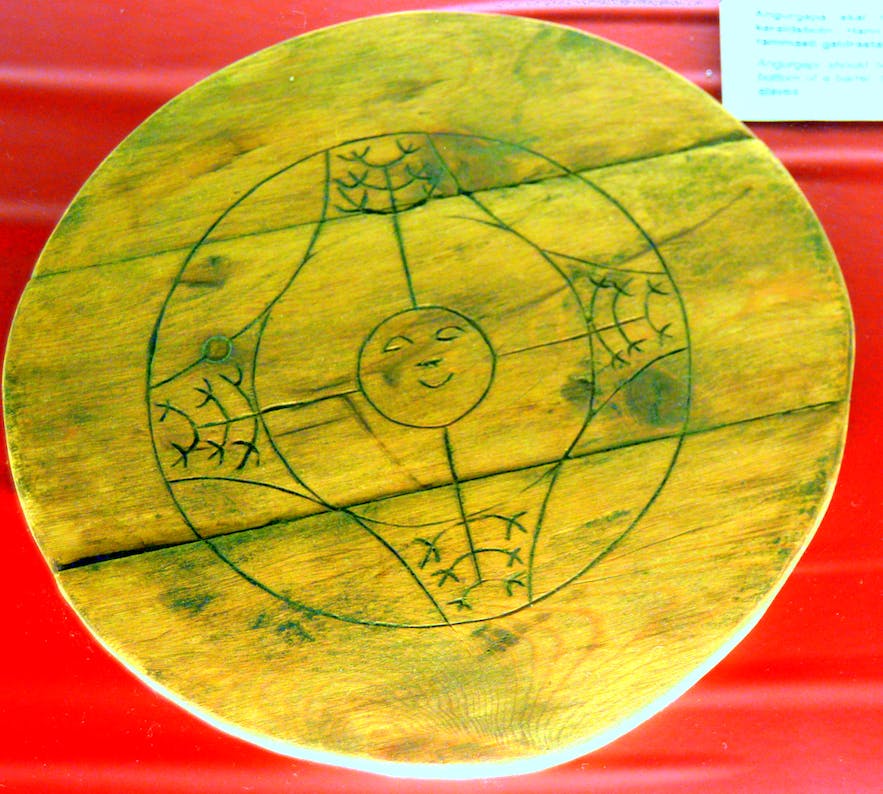 The museum is on two floors and depicts the history of sorcery, which was seemingly powerful in this area of Iceland called Strandir. It was in the year 1652 that the first man was burned as a sorcerer, up in North-Iceland. His name was Jón Rögnvaldsson and he was charged with raising a ghost (zombie) to cause harm to his enemy. You can see the zombie crawling out from the floor of the museum. It is really scary looking! 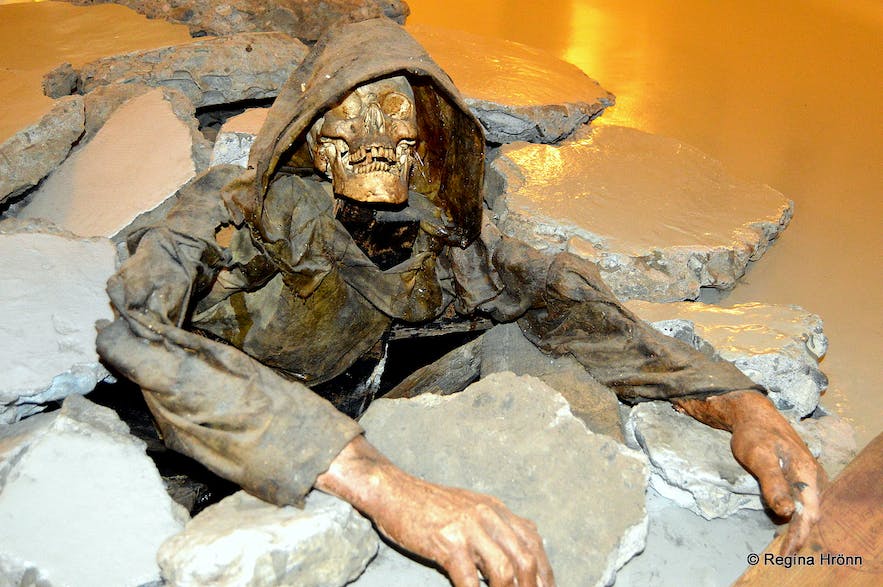 At Trékyllisvík three men were burnt at the stake for sorcery in 1654.

A witch hunt followed and this period of time in Iceland, from 1654-1690, has been called "Brennuöldin" or the Fire century.  Another 16 men and 1 woman were burnt at the stake, the last one in 1683. I am happy that I was not alive in these dark ages of Iceland. 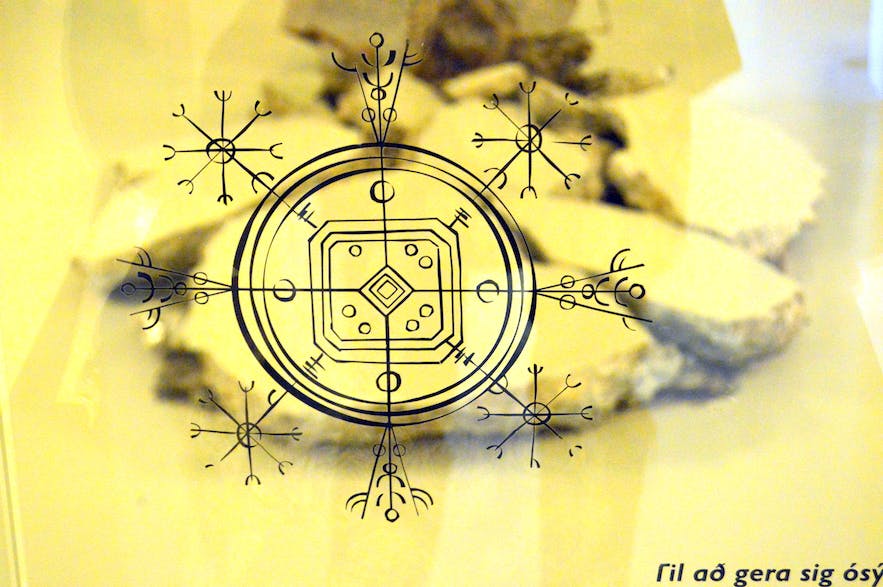 Above you can see the magical sign for making oneself invisible!

The curator, Sigurður Atlason, sorcerer, is with me in some of the photos. He is a lovely man and quite a colourful character. He was even willing to lie down on the floor with me by the zombie to get a good photo for my travel-blog.

Sadly Sigurður died suddenly in November 2018 :( He will be missed. 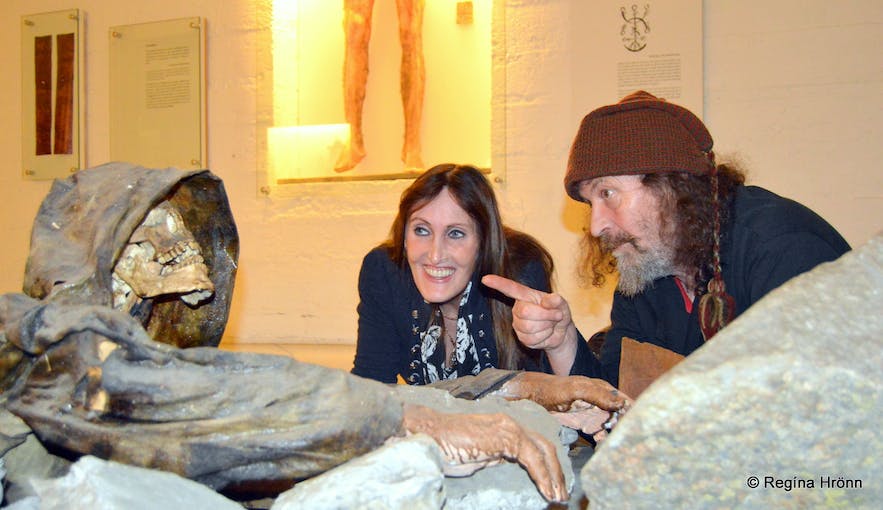 It was a strange scene, here I was lying on the floor with a sorcerer next to a zombie - while a magician was taking our photo! Life is sometimes very strange ;)

Now, this is by far the most infamous piece at the museum - the horrible necropants, which date back to the 17th century. I read about them in "Þjóðsögur Jóns Árnasonar" - the Folklore of Jón Árnason, but I go this English translation from the homepage of the museum:

If you want to make your own necropants (literally; nábrók) you have to get permission from a living man to use his skin after his death. After he has been buried you must dig up his body and flay the skin of the corpse in one piece from the waist down. As soon as you step into the pants they will stick to your own skin.

A coin must be stolen from a poor widow and placed in the scrotum along with the magical sign, "nábrókarstafur", written on a piece of paper. 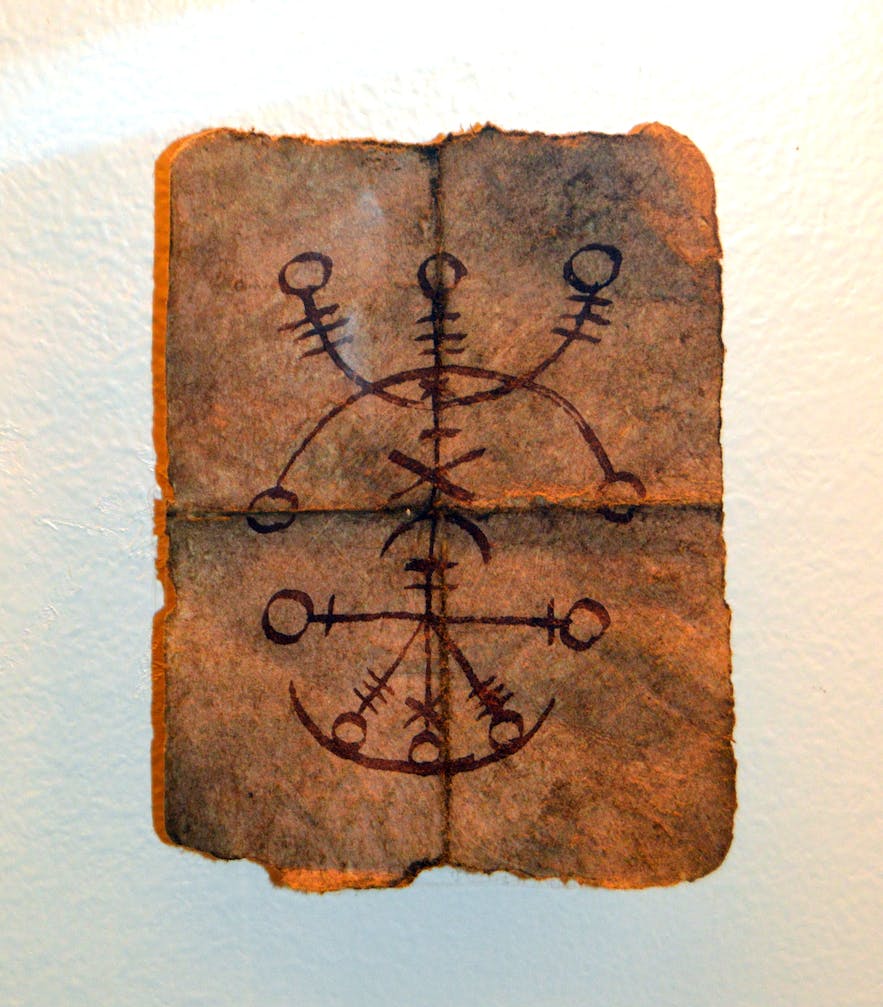 Consequently, the coin will draw money into the scrotum so it will never be empty, as long as the original coin is not removed. To ensure salvation the owner has to convince someone else to overtake the pants and step into each leg as soon as he gets out of it. The necropants will thus keep the money-gathering nature for generations". - Nice, eh!

The necropants on display at the museum are a replica made from the measurements of a local man at Strandir - the curator of the museum told me that he didn't know if these were his private parts as well or if they are just made up ;) 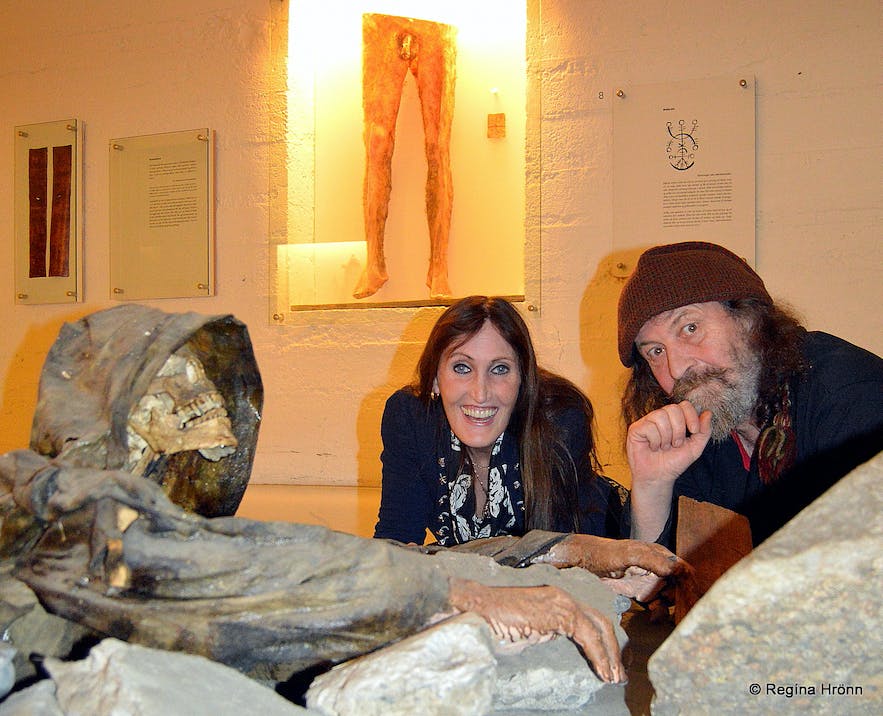 The news about the necropants have travelled all over the world and Stephen Fry talked about them in his show QI and claimed that this is how the Icelandic economic system works ;) The show caused havoc and the museum saw many more visitors after the show aired - most of them were looking for the necropants!

There are of course many interesting things on display at this museum, but these necropants have become the most infamous ones. 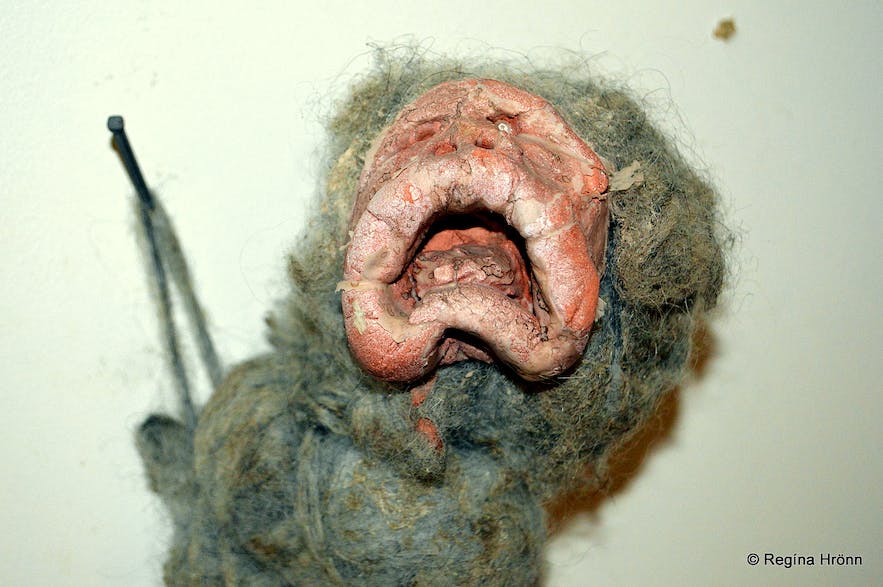 There were horrible looking creatures at the museum which caught my attention. They are called "tilberi" and are milk-sucking demons! Women were supposed to create tilberi to amass butter. They would send the tilberi, which had mouths on both ends, to suckle on the cows of other farmers until it was filled with milk. It would then return to their "mother" and vomit into the churn for making butter - and their vomit was almost pure butter, albeit a little lumpy!!

I found step-by-step instructions on how to create this demon in "Þjóðsögur Jóns Árnasonar" - the Folklore of Jón Árnason:

"Snakkur or tilberi are made by women in the way that they steal a rib from a corpse at the cemetery. On Whitsunday, they steal a piece of copper, which they break from a church clock. Then they pluck wool from between the shoulders of a newly sheared sheep, which belongs to a widow.

They then enwrap the wool around the human rib and the piece of copper and keep it between their breasts. Next time they go to communion they spit the sanctified wine out and into the wool with the rib and the copper and the tilberi is thus created. 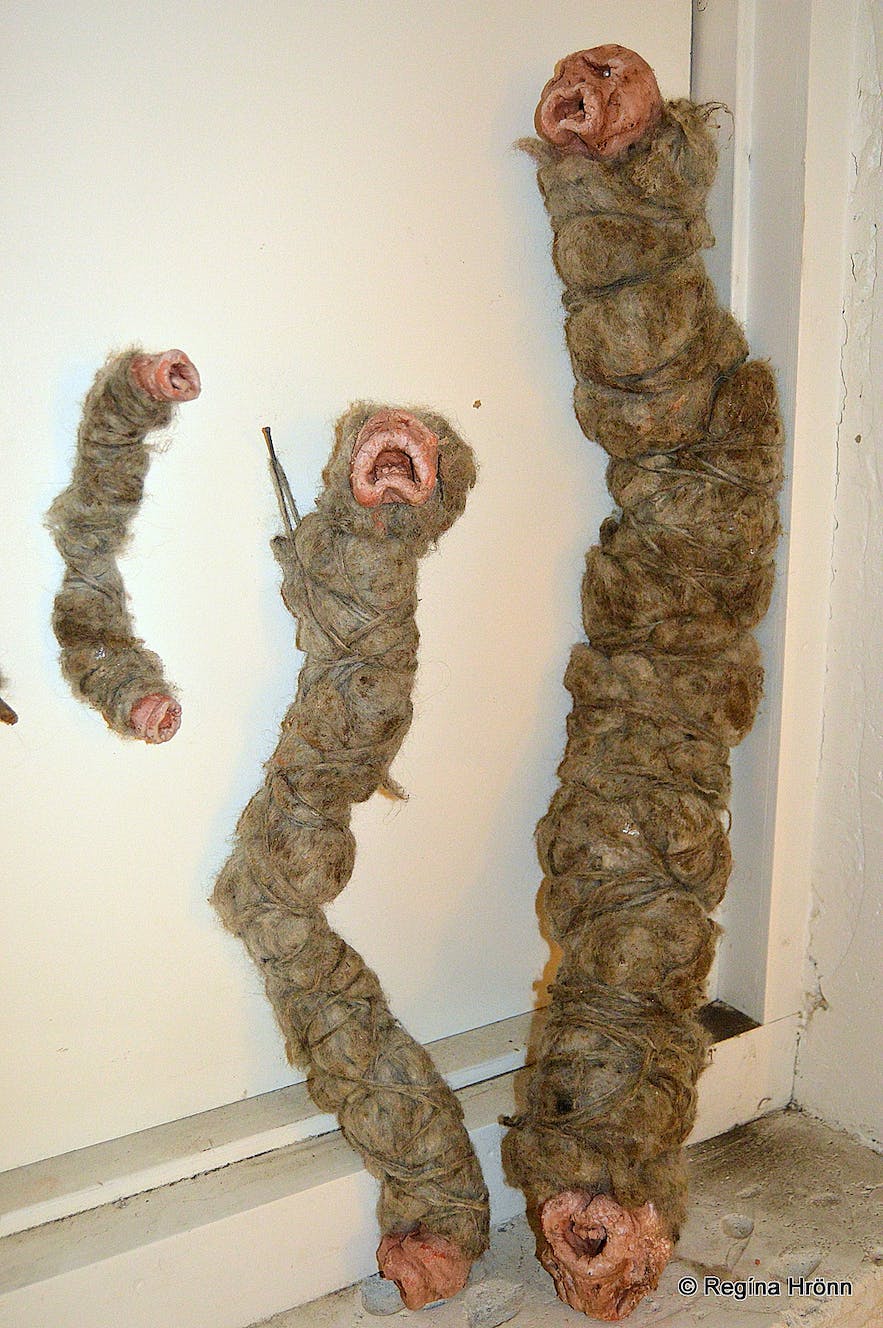 The tilberi gets its nutrition from suckling on the women. The women are easily recognized by their limp and the sanguine teat-like wart on the inside of their thigh, on which the tilberi suckles. To get rid of a tilberi: let them pick up all the lamb droppings on three highland pastures and bring to the women - then the tilberi explodes! (This creature cannot stand the holy number 3). 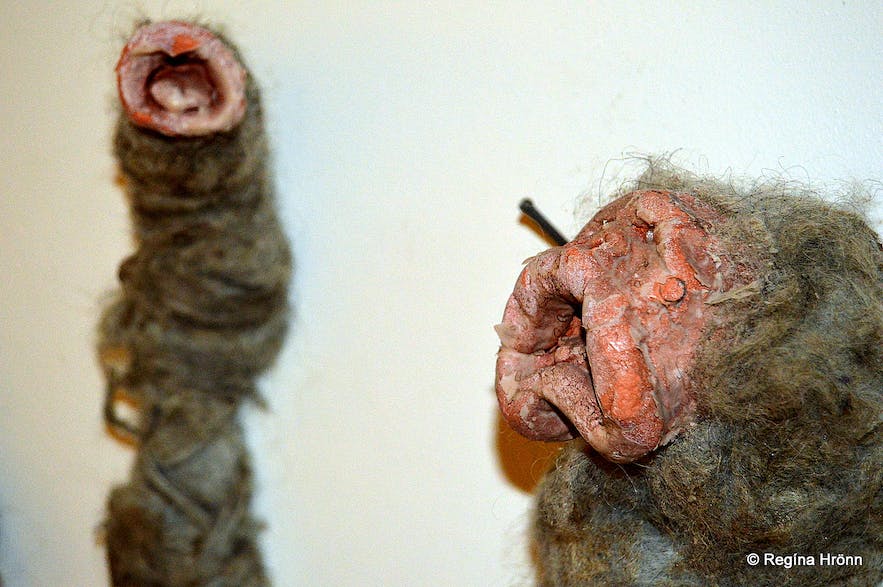 The Ritualistic Stone from Viking Times

Resting on a crimson velvet cushion is the only ritualistic stone from Viking times ever found in Iceland. It is believed to have been used in connection with sacrifices to the Viking Gods - and remnants of animal blood can still be found in the bowl.

This bowl was found in "Goðdalur" - the Valley of Deity in Bjarnarfjörður valley in the Westfjords and according to folklore there was a heathen temple in this valley. There is also a burial mound in this remote valley containing the remains of the Viking Goði. It is said that both these places, where the heathen temple and the burial mound are located, are jinxed and should never be disturbed.

Forensic tests have been carried out to ascertain that the ancient blood is authentic. 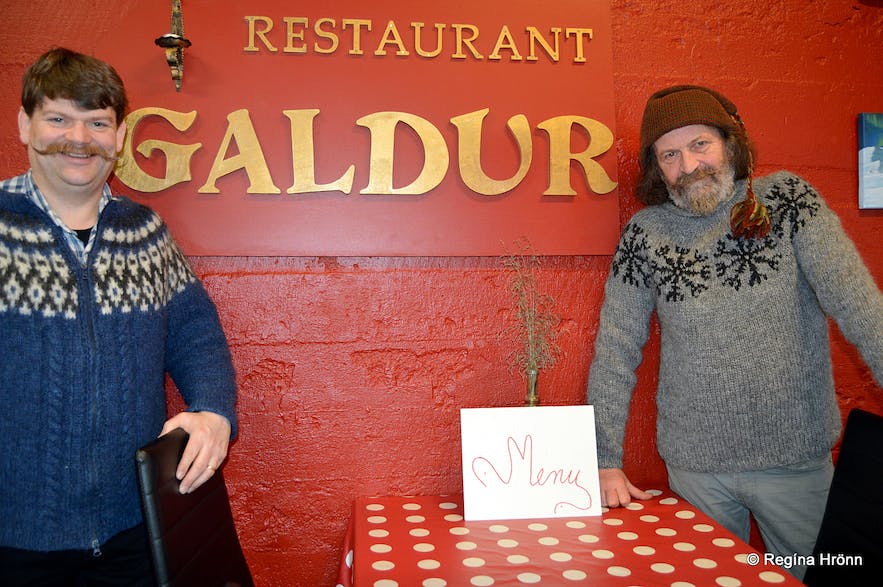 The magician and the sorcerer

My husband and I were staying for 3 days in Hólmavík as he was taking part in the Children's Cultural Festival of the Westfjords.

We stayed at Steinhúsið, which is next to the Museum of Icelandic Sorcery and Witchcraft and decided on having dinner at the Galdur restaurant. This restaurant is located at the museum and is run by the curator of the museum, the "sorcerer" Sigurður Atlason.  You can see him with my magician husband, Jón, in the photo above. 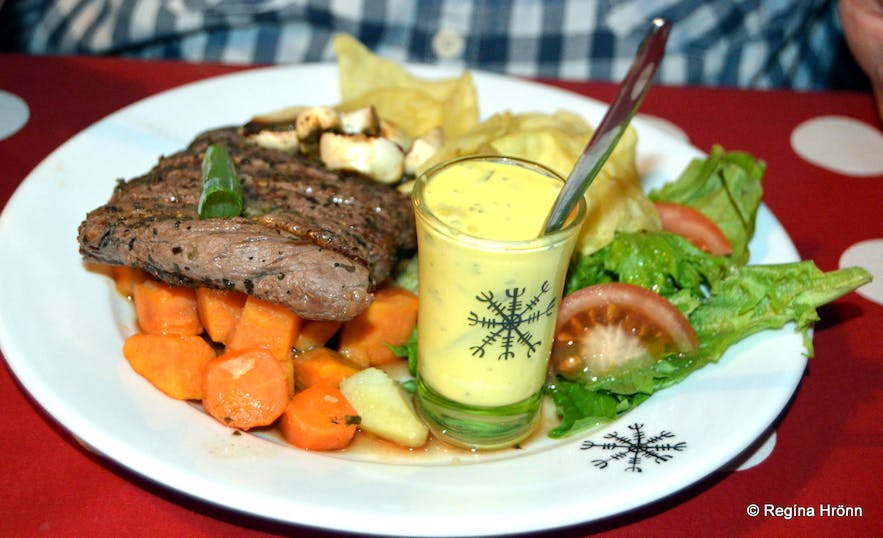 The first night we were the only ones dining at the restaurant and had a good chat with the curator. My husband had the beef, which he said was excellent. I have food allergies so I rarely eat at restaurants. The second night the restaurant was absolutely packed, which was even lovelier as there was such a good atmosphere in there :)

My husband had the lamb, which he praised; and this man loves his food! The service was fast and friendly and we felt totally relaxed and at home. 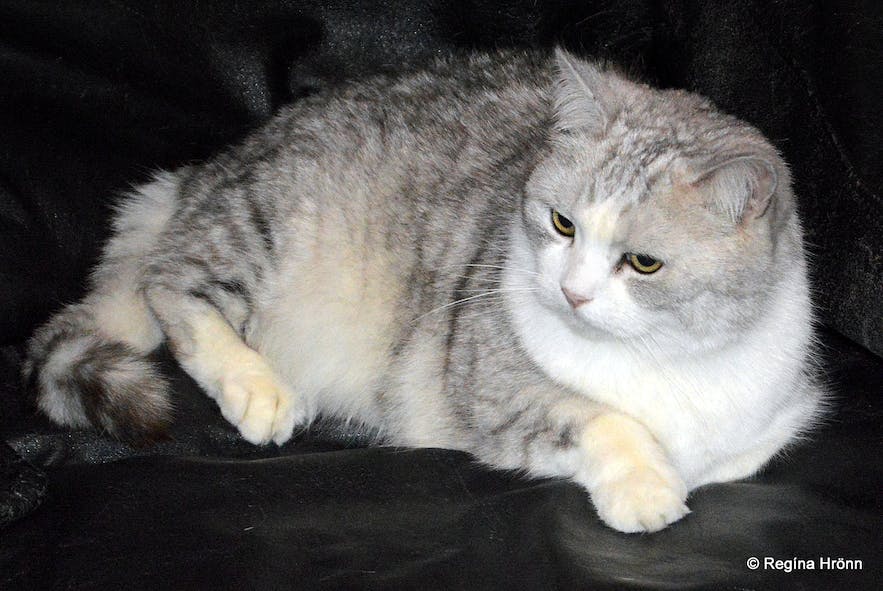 Hippó (Hippopotamus) the Cat is the cat of the curator of the Museum of Icelandic Sorcery and Witchcraft, Sigurður Atlason. This cat has got many fans around the world.

Hippó is partly Persian, with a beautiful thick white and grey fur. It is obviously very well kept by its owner, Sigurður. People started writing about Hippó in blogs, on Facebook and on Twitter and guests started asking about this lovely cat. I had read about it on the news and when I posted photos on Facebook of the Museum of Icelandic Sorcery and Witchcraft one of my relatives asked me if I had met Hippó. 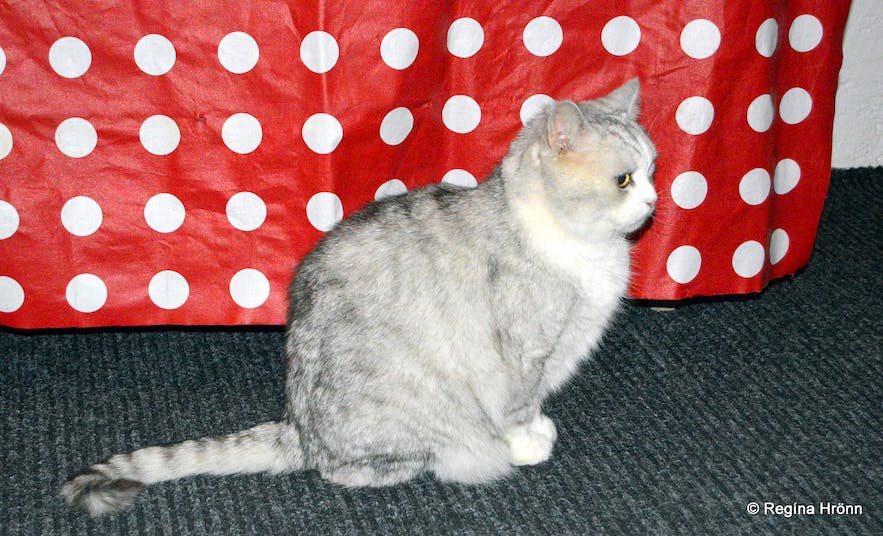 She is a personal friend of Sigurður and owns cats, which are friends with Hippó. I had forgotten to ask about Hippó, so off I went to the museum again and asked to see the cat. It was sleeping at home, but Sigurður told me that he would bring it to the museum in the evening. So finally I met this famous cat when we dined at the museum on our second night in Hólmavík. Other guests at the restaurant at the museum enjoyed the company of Hippó as well and were petting it and taking photos of it.

Hippó, the museum cat, lent its name to a charity and was the protector of funding for Kattholt, which is our cat shelter. Hippo thus raised ISK 65,000 for homeless cats and helped Kattholt from being closed down. A postcard with a photo of Hippó was made and sold and the profits went to Kattholt. People from all over the world took photos of Hippó and sent them to the museum and, one of these photos was chosen for the postcard.

Hippó the cat was 11 years old the last time I visited the museum. 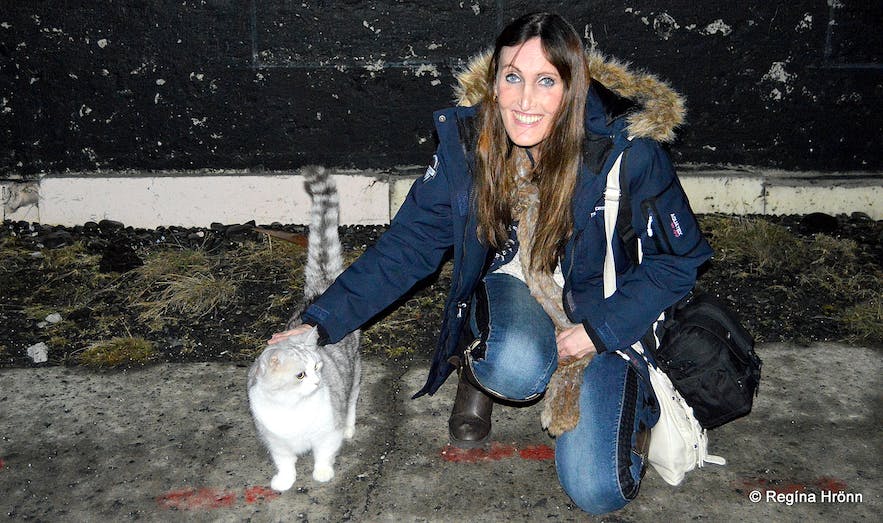 The Museum of Icelandic Sorcery and Witchcraft is open every day from 11:00-14:00 and 17:00-20:00. The same opening hours are valid for the Restaurant Galdur. Look up the website of Strandagaldur to see the admittance fee.

If you want to join a really cool guided walking tour in Reykjavík then I recommend the Icelandic Mythical Walk | Trolls, Elves & Hidden People, where you get to know about the necropants and how to wake up a zombie, amongst many other interesting stories from Icelandic folklore. 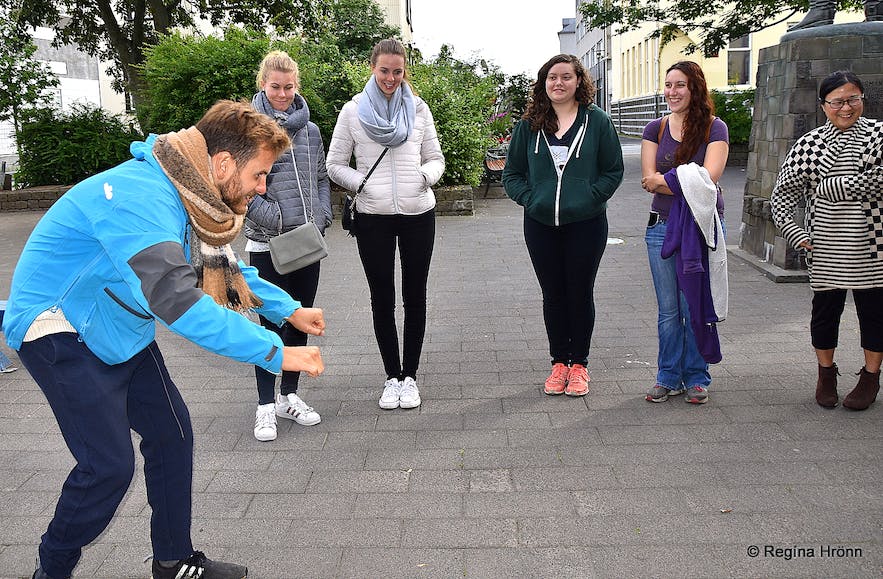 Our Reykjavík guide showing us how to wake up a zombie

Hólmavík is located 230 km away from Reykjavík. You can rent a car in Reykjavík and drive up there in a day.

Have a lovely time at the Sorcery museum and at Strandir :)