Does it look a little ominous? Possibly. But the Hallgrímskirkja church in the capital city of Reykavik is in reality, a welcoming haven to lots of folks.

(Want to start in Reykavik on a road trip? Check out this 5-day self-driving tour.)

Many people come to visit the city to take photos of their giant spired place of worship, but might not think to visit inside. It’s well worth taking a closer look at this beautiful architectural wonder though to fully understand its impact on the city and entire country.

It’s been a mainstay and icon of Reykjavik for decades, and now has become a popular tourist attraction for those visiting the area from across the globe. Let’s dig into its rich history, specs of building and details about when to visit.

Historic Background of the Hallgrímskirkja Church 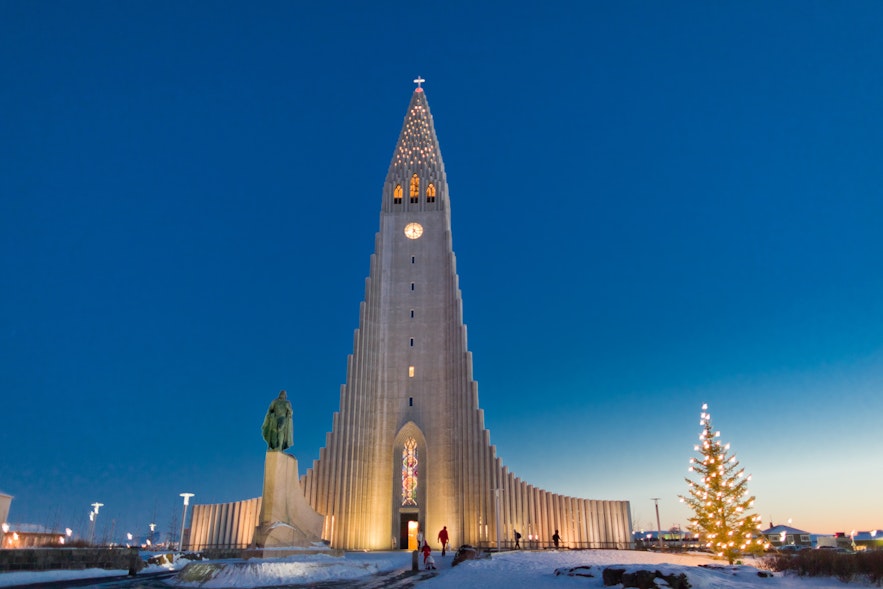 Much of the inspiration around this church is in honour of Hallgrímur Pétursson. He was a revered Icelandic poet who lived in the mid-1600s. Although he went to ministry school in Sweden and lived in mainland Europe for a while, he returned to his home country to lead a Lutheran community in Iceland. Much of his poetic works are religious in nature, with the most famous collection called “Passion Hymns”.

There are about 50 poems that are still revered throughout the country. To this day, the poems are read over the radio and in churches for the Lenten season, as the material focuses on the passion of the Christ. The prose has also been translated into several languages and enjoyed worldwide.

The building itself was conceived by architect Guðjón Samúelsson, starting in 1937. He won a contest proposed by the Icelandic Parliament, and the first phase of project was completed in 1948.

Sadly, he passed in 1950 and did not get to see the full completion of the church, as it took 41 years to finish. Samúelsson also worked on many other prominent structures nationwide, including the main building of the University of Iceland and the National Theatre.

His style is often minimal, as is often the case of Nordic or Scandinavian design. It’s even called a form of Brutalism sometimes as well, which can be particularly striking in some of the harsher conditions of Iceland’s dreary winter seasons.

Today, the Hallgrímskirkja is an Evangelical-Lutheran Church of Iceland and has 7,000 parishioners. They host regular services for members and traditional Christian ceremonies annually.

(find more of Iceland's hidden gems with this summer-inspired tour!) 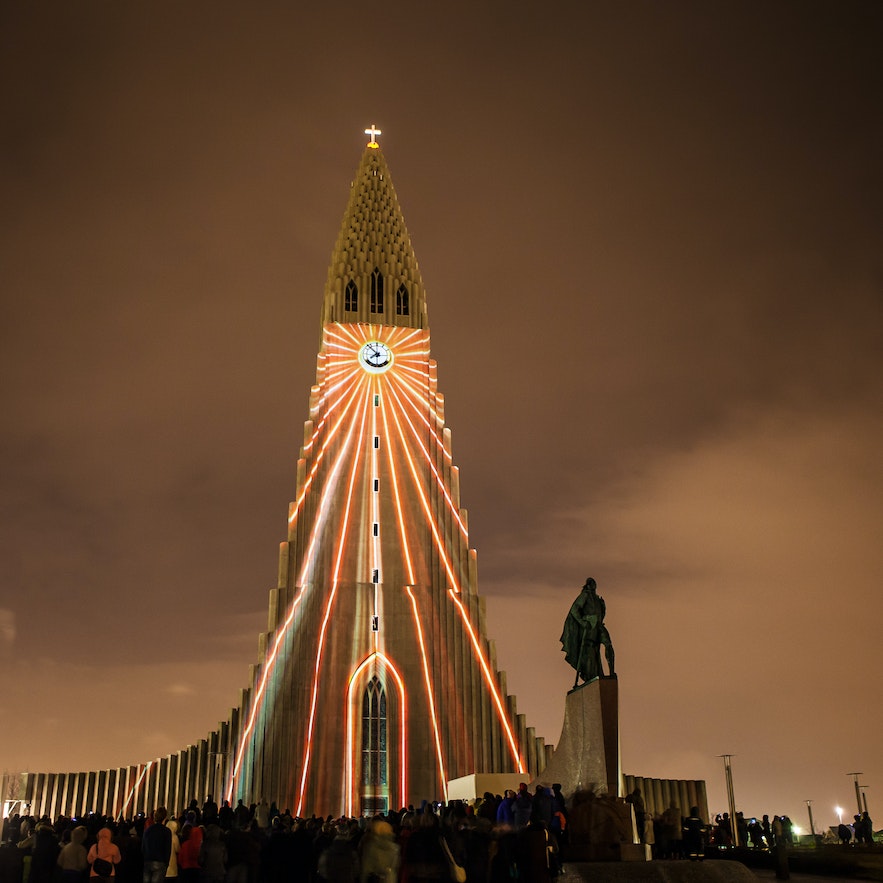 The striking structure stands as a massive pillar in the city, at 244 feet tall. It’s the tallest in the city, and the sixth tallest in Iceland. Its design is influenced by Scandinavian Modernism, known as Functionalism. It’s a style that mimics nature. The tall tower looks like the Icelandic basalts found in many locations in Iceland, such as near the black sand beaches of Vík, formed by lava flow. The basalt columns that inspired the design of the church are the ones found surrounding Svartifoss waterfall (Black Falls) in Skaftafell Nature Reserve.

Beneath the choir loft, the crypt was consecrated in 1948. Next, the steeple and wings were completed in 1974 and the nave consecrated in 1986. Each part went over budget and caused a fair amount of controversy. Although the majority of Icelandic people are happy now with the end result. 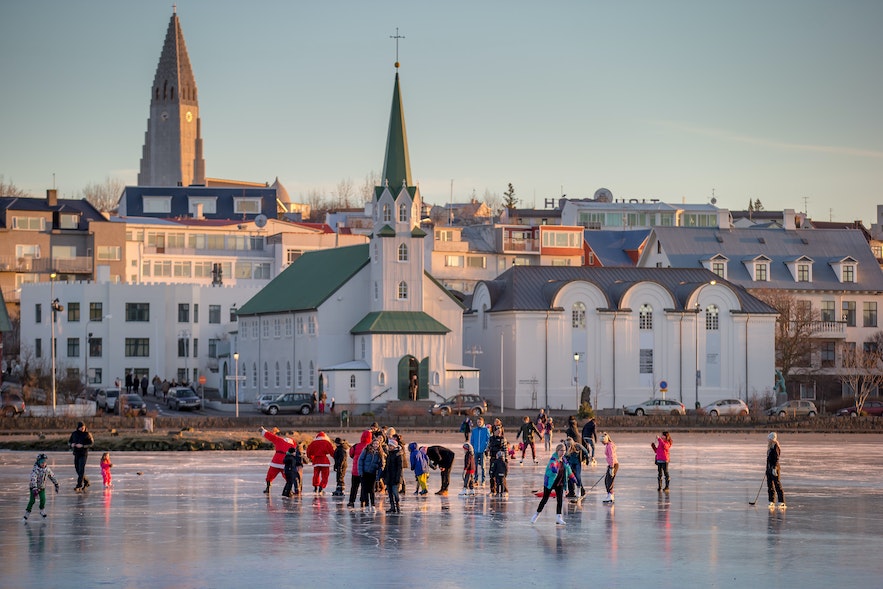 Some people assume this is the cathedral of the city, or the whole of Iceland. However, the actual cathedral church of Reykjavík is more downtown and is called Dómkirkjan (not the one pictured above).

While at Hallgrímskirkja, visit the nearby statue of Leifur Eiríksson, the first European to set foot in America. It was given to Iceland as a gift by the United States to celebrate the 1,000-year anniversary of Iceland’s parliament in 1930.

Inside is just as impressive as outside. Have a look at the massive pipe organ designed and constructed by the German organ builder Johannes Klais of Bonn. It was officially consecrated in 1992. It weighs about 25 tons and includes over 5,200 individual pipes. The biggest is more than 30 feet high. There’s also a small organ used for everyday services, made my Danish organ company Frobenius & Sönner.

Visiting the Hallgrímskirkja in Reykjavik

When you next visit Iceland, take some time to enjoy the full grandeur inside and out. The real test is to try to get the entire tower in your Instagram shot!

If you are curious about ceremonies and masses held at the church, anyone is welcome to attend the public services. Hallgrímskirkja posts events on their website throughout the year, including meditation with organ music and afternoon prayer.

They often host music concerts too from traditional to modern shows. They also do host weddings and funerals, but you need special permission to do one of these ceremonies and have connections to the church. 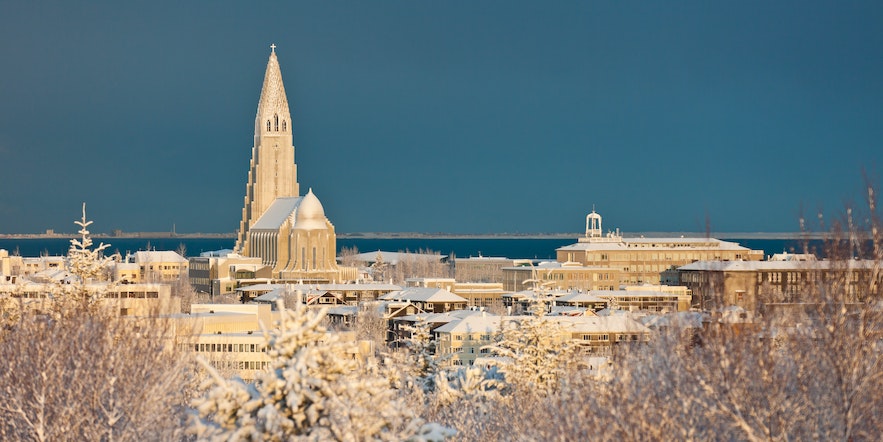 Remember in the winter, the sun sets very early and rises late if you want to enjoy views from the tower. Check to see if there’s any holidays or special hours before visiting.