What to Do in Iceland: 8 Recommendations You Won't Read Elsewhere

Looking for what to do in Iceland? I'll tell you some tips the other guys may have left out!

However, as someone who likes to get away from the crowds and find the hidden beauties of every country I visit, I’m going to share some of my favourite things to do in Iceland in addition to those well-known spots.

1. Consider the Blue Lagoon, but more importantly, if you like lobster, head south about 15 minutes for amazing $20 unlimited lobster soup atCafe Bryggjan in Grindavik.

The Blue Lagoon is probably the first thing anyone tells you to see in Iceland. I, personally, was not a fan because it was basically an overcrowded hot tub, which wasn’t terribly exciting. It also books out way in advance, so if you don’t plan early enough, you may not get a reservation.

When we tried to show up with no reservation, we were turned away and ended up in Grindavik at the recommendation of someone at one of our hotels. It's a quick drive from the Blue Lagoon, so it's not that far out of the way. And, it...was amazing. $20 for all-you-can-eat lobster soup with bread and coffee in this unassuming little shipping town. Don’t miss it. The cafe is small but very charming, and the soup is delicious! 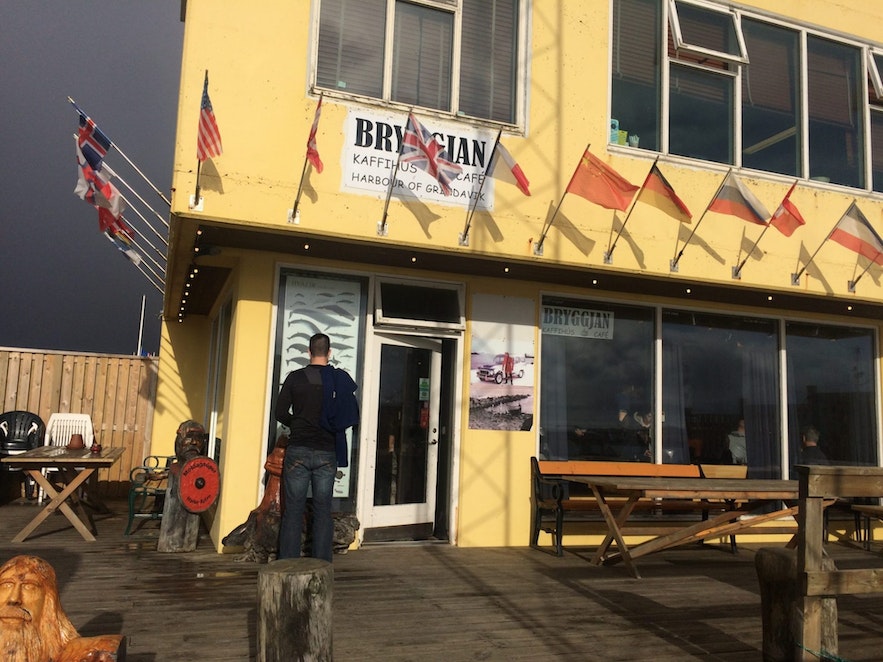 2. You’ll, of course, want to see the mainwaterfalls like Gullfoss and Skógafoss, but try to also get away from the crowds and see the magic of Iceland away from the tour buses.

The well-known waterfalls of Iceland are known for a good reason - they’re spectacular. But, one of my favorite parts of my trip to Iceland was driving through the countryside with nobody around for miles and waterfalls in every direction. And rainbows. So many rainbows!

So, get away from the crowds and the tour buses and get adventurous.The waterfalls aren't quite as big and maybe not as spectacular, but the scenery is unparalleled. 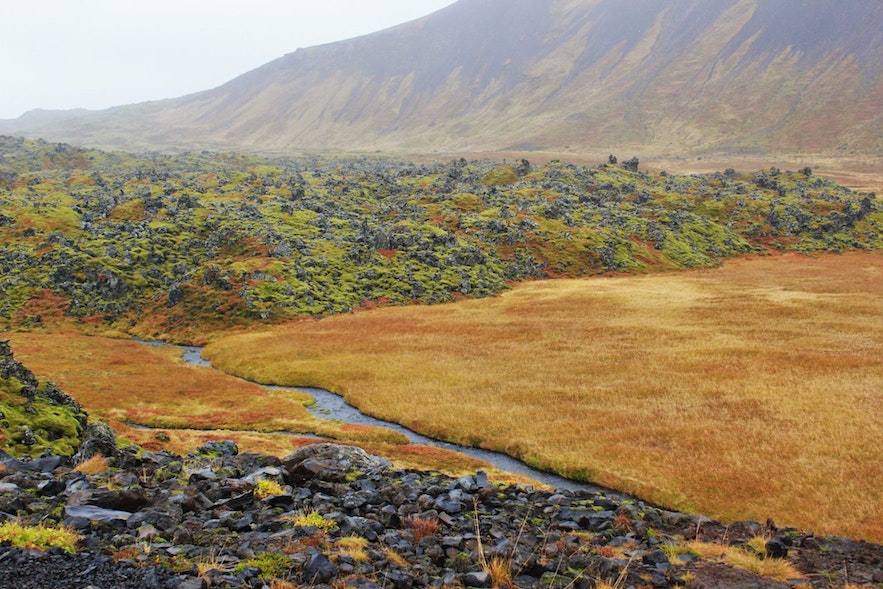 3. Expensive meals in Iceland are fine, but if you’re not too picky, so are the cellophane sandwiches from the gas stations.

Food in Iceland is not cheap. If you’re going to Iceland for beauty and adventure, skip the sit-down restaurants for every meal and try gas station sandwiches. I promise, they’re quite delicious and far cheaper. I didn't manage to take any photos of them, however, so here's a photo of a delicious Irish Coffee I had near Selfoss. Yum! 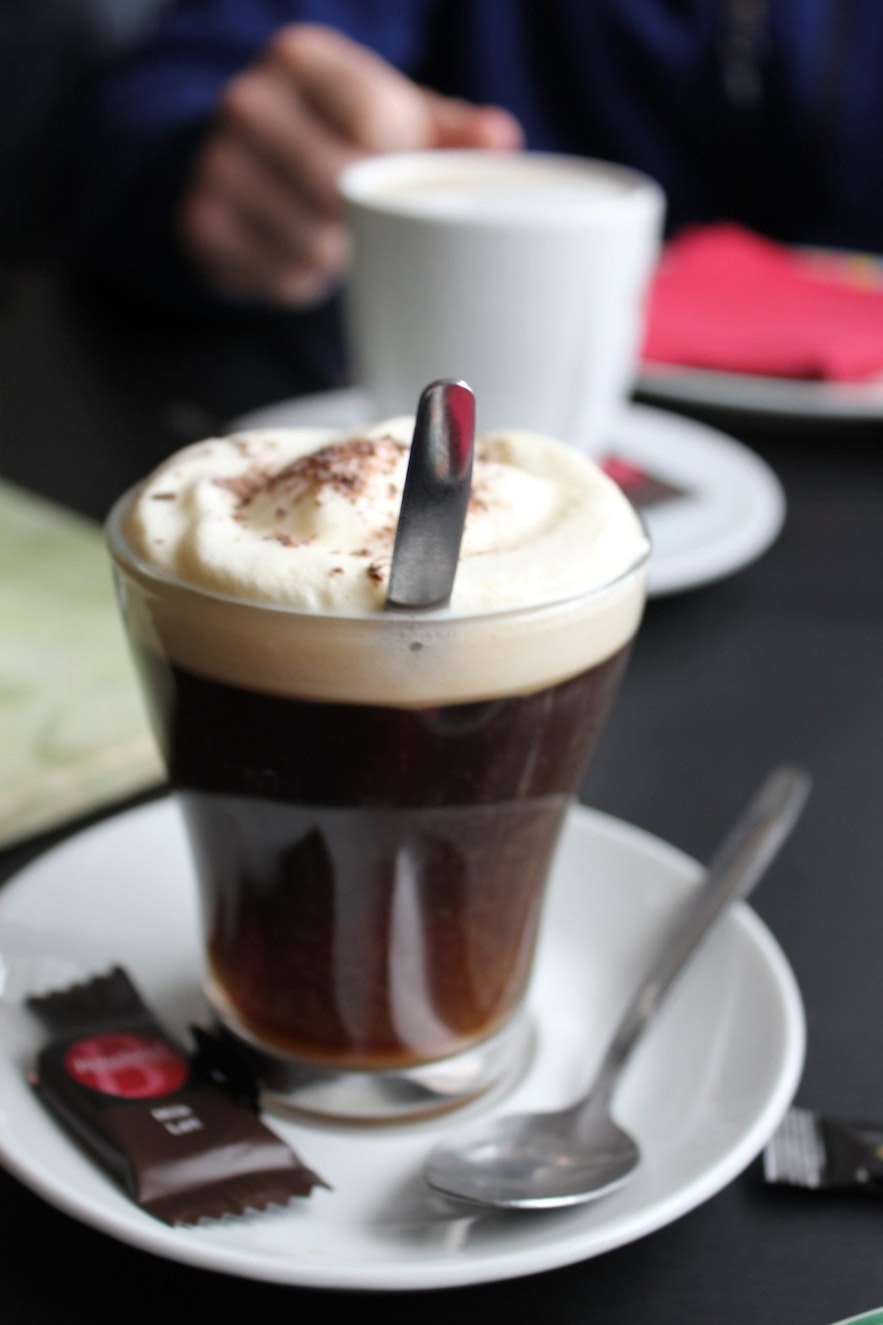 4. The Glacier Lagoon in Jökulsárlón is a pretty cool site to see, especially if the weather cooperates. But far cooler than the lagoon is actuallyice climbing on a glacier!

I’m sure you’ve seen all the photos of the Glacier Lagoon in South Iceland with the big chunks of ice sitting on black sand beaches. It’s pretty cool, no doubt about it.

But I went to see it after a day of ice climbing on a glacier in Skaftafell National Park, and it just didn’t quite compare. Even if you don’t want to be quite adventurous, you can go for a nice glacier walk, and the views are simply amazing! 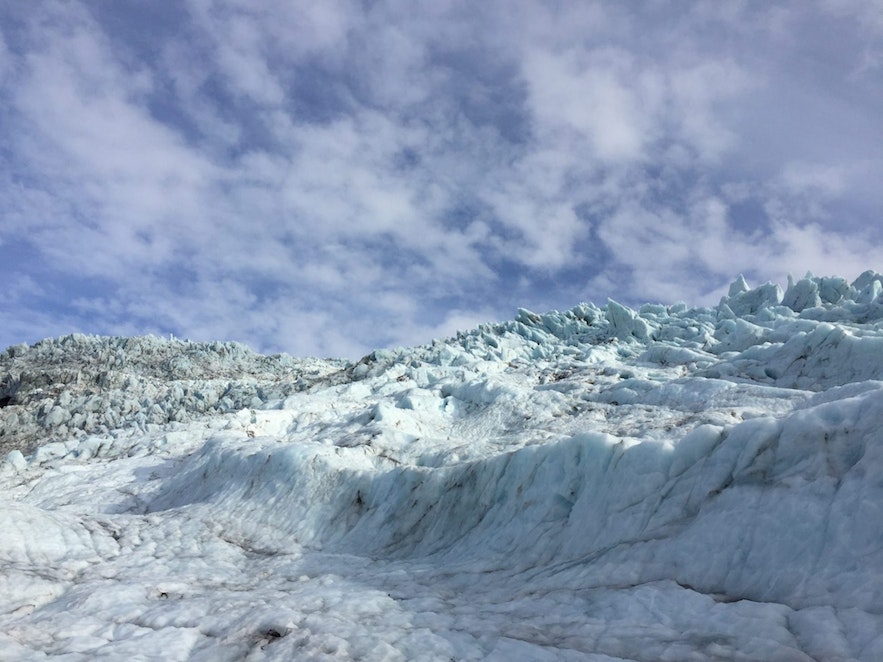 5. Maybe you’ve read about the penny-flavored natural spring on theSnaefellsnes Peninsula, but have you seen a waterfall flow up instead of down?

We gave our donation and filled our water bottles, and I couldn’t drink it because of the overwhelming mineral taste. But, drive on around the Snaefellsnes Peninsula on a windy day to watch the waterfalls flow up into the sky. You won’t want to be outside of the car for too long because it will be very cold, but it’s quite a sight to see! 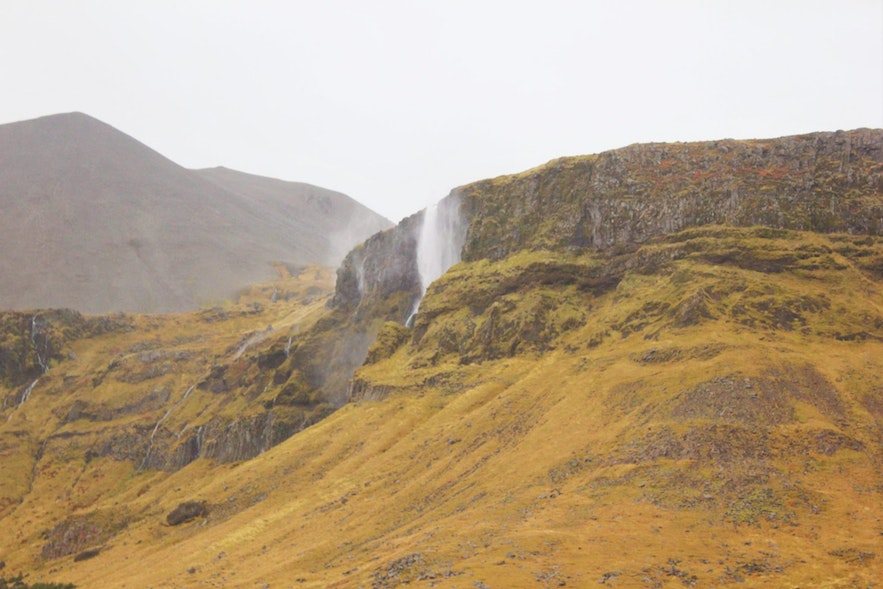 6. You’ve definitely heard about theGolden Circle, and for good reason. But have you heard of Borgarnes?

Remember in the Secret Life of Walter Mitty when he stops at the pizza shop and they’re all yelling at him in Icelandic because a volcano is about to blow?

Well, in reality, that pizza shop is a delicious bakery in Borgarnes named Geirabakari Kaffihus. Go there. And, after a delicious donut and coffee, the drive inland from Borgarnes to the Golden Circle is mind-blowingly beautiful! 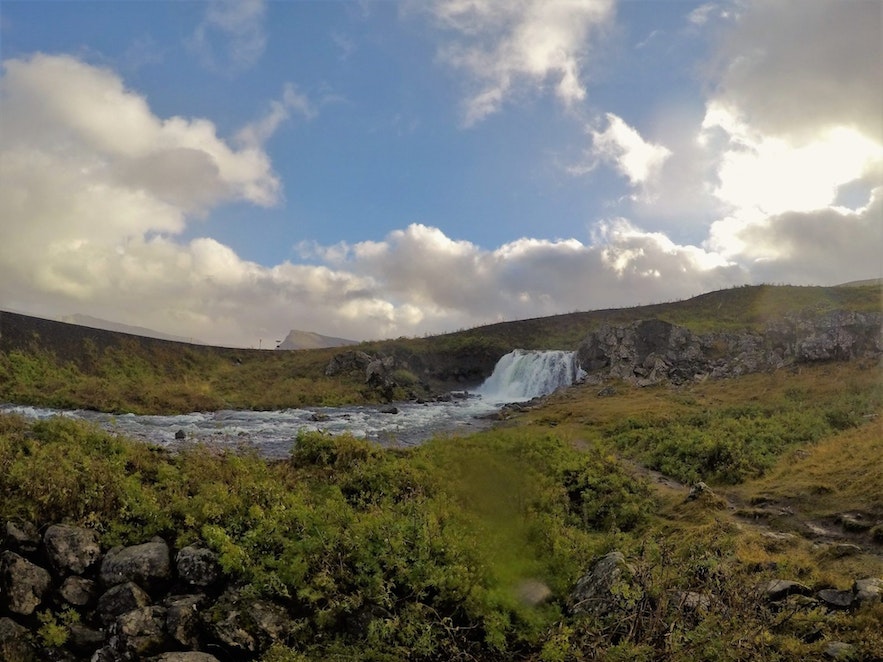 7. TheBlack Sand Beachesnear Vik are a cool site to see, especially with the lava cave and stories of Icelandic legends. But, drive another hour east, and you’ll be treated to views you’ll never forget.

We pulled up to the black sand beaches completely unprepared. We figured we’d enjoy a cup of coffee at the cafe, and walk around a bit, but we had no idea how busy it would be. We were lucky enough to grab a table by the window right before two buses pulled up outside and the cafe filled up with people and noise. It’s certainly worth the stop, but be prepared.

Then, take a detour east towards Hof and you’ll be treated to more black sand beaches, incredibly cliffs, and wide open roads. 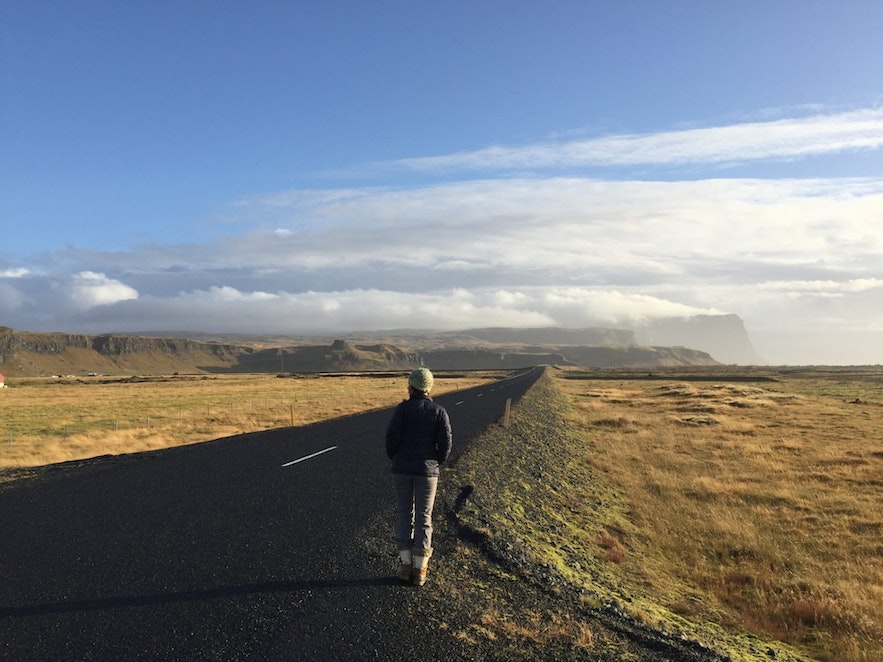 8. You’ll notice that Iceland has a huge appreciation for American culture, which is cool, but more importantly, they have a huge respect for women.

We enjoyed beers at the Lebowski Bar and had lunch at the Chuck Norris Grill. They like their American Culture, and Reykjavik has some cool bars and great beers.

But what I loved most was this awesome sign that empowers women (and men) to have an outlet if they are harassed. You being drunk is not an invitation for someone to take advantage, and I thought it was incredibly cool that they had this posted! Way to go, Iceland. Nicely done. 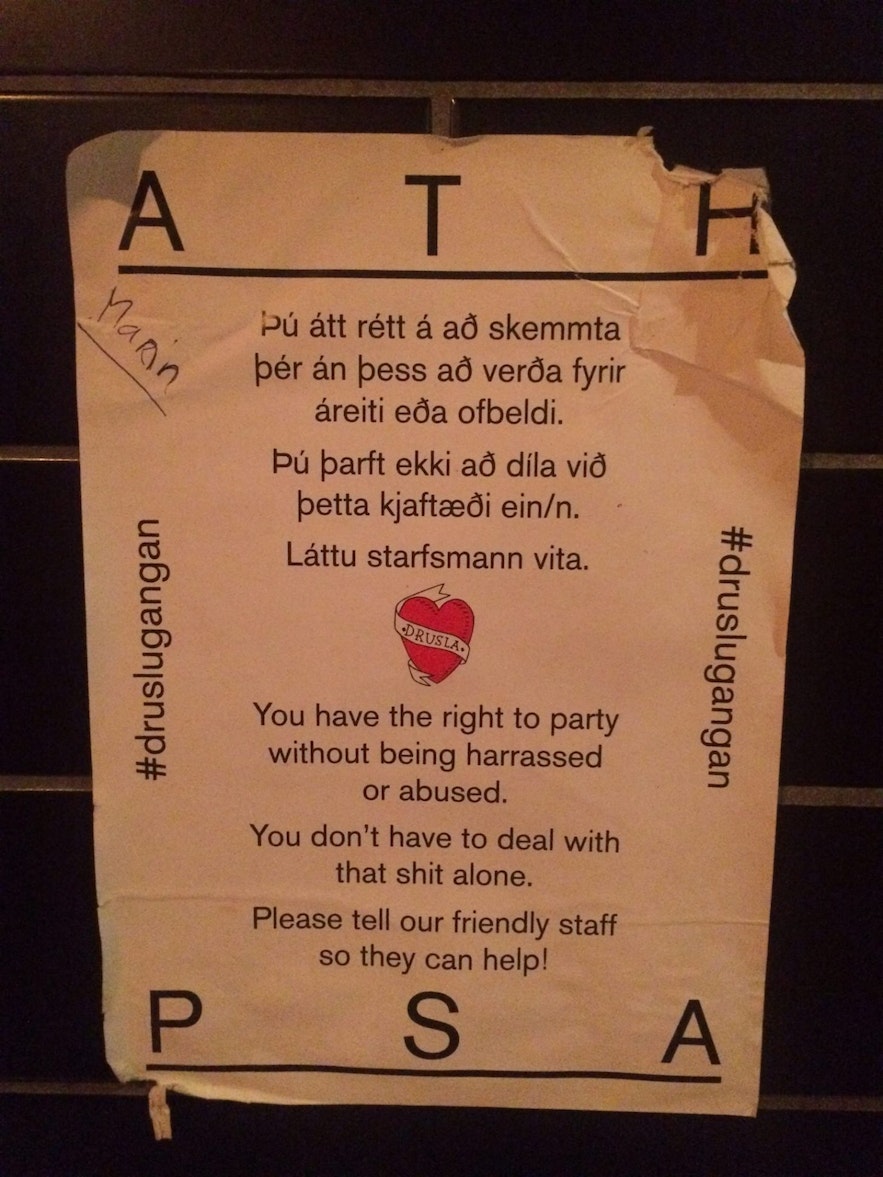