These aren’t just local fauna. While researching for my trip this year, I discovered that these animals were just as likely to be served up on a plate as they were to be found in the wild. I cringed. I panicked. Traveling to Iceland had been so high up on my bucket list for longer than I could remember, and now I would have to starve, rationing pieces of a granola bar and spoonfuls of oatmeal over a five-week span.

The Reality of Being Vegan in Iceland

Thankfully enough, my thoughts of miserable, bland sustenance quickly faded away. I contacted a few of my vegan friends who had been to the island and asked about their experiences. I popped the city of Reykjavik into Happy Cow’s website and was overwhelmed with the amount of options.

To be sure, most restaurants that offer vegan food also serve up meat in some capacity. There is still only place with a fully vegan menu (see Kaffi Vinyl below) when I was there, but the beautiful thing is, unlike other cities, many restaurants offer at least one vegan option for every course- including dessert.

While staying in Iceland for over a month had its benefits, by far one of the greatest experiences was trying all the delicious vegan food in its capital, Reykjavik. So, if you’re headed to this tiny, artistic, fabulous city as a vegan, prepare to be amazed.

The Best Vegan (and Vegan-Friendly) Restaurants in Reykjavik

Since there are so many places to visit on a plant-based diet in the world’s northern-most capital, I’ve described my top three favorite places first, and then listed other (equally scrumptious) eateries. 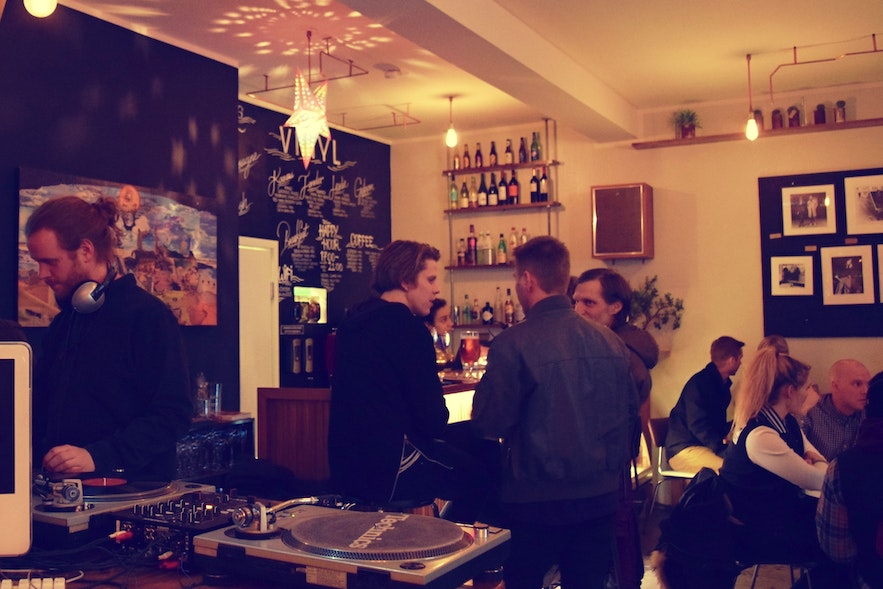 Kaffi Vinyl- Hands down, the most chill vibe in town also belongs to the city’s only vegan restaurant. With cool art, record-themed everything, and a diverse group of patrons, Kaffi Vinyl is the place to go. They play an excellent selection of music, with DJs coming in for events like Reggae Night. Everything I tasted at Kaffi Vinyl put a huge smile on my face. From the lasagna to the wrap to the cake to the cocktails (I went several times), the cuisine never failed to impress. Even if you’re not vegan, don’t visit Reykjavik without checking this place out.

Glo- While Glo does serve some chicken dishes (which I hope they will phase out), they have a wide variety of vegan and gluten-free plates to choose from, including desserts. It’s a clean, open-spaced area with an upscale cafeteria feel to it. This was the very first restaurant I visited in Iceland, and I was still getting used to the Krona (not to mention the Icelandic accent), and the staff was very friendly. Glo is the perfect place to go when you want an affordable, savory meal. They also serve beer. 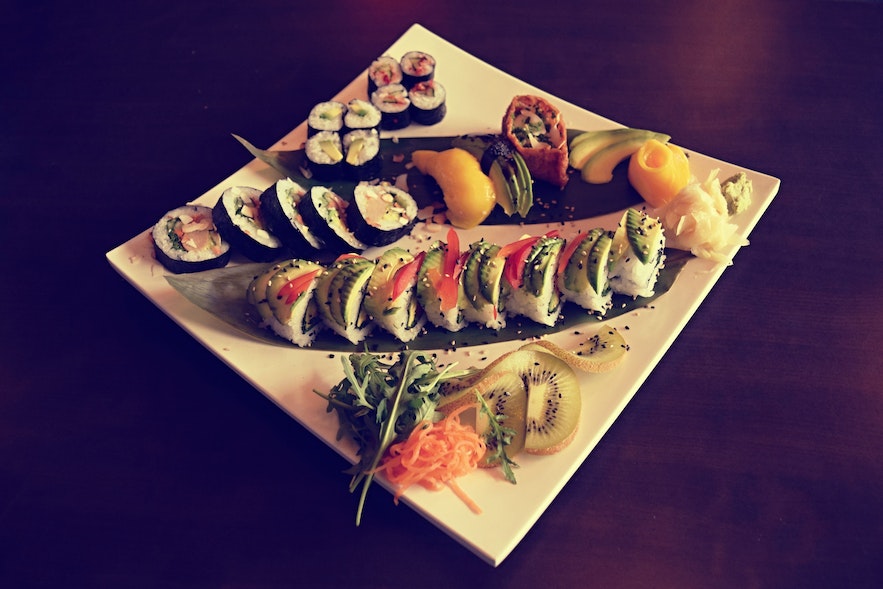 Sushibarinn- It’s hard to choose just one spot for the best food, especially when so many places serve up dishes that go above and beyond what you’d expect. However, if I were to judge a restaurant solely on the taste and uniqueness of its food, it would have to be Sushibarinn. This is a sushi restaurant that serves fish and meat, nonetheless, this was hands-down the best-tasting vegan sushi I’ve ever had. The woman that I ordered from was vegan as well, and she chatted to me as she freshly prepared a variety of melt-in-your-mouth rolls. I was impressed by the creative presentation of the sushi, as the combinations of fruits and vegetables she used. It was my last meal in Reykjavik, and it couldn’t have been better.

Gardurinn- For the experience of an authentic, home-cooked meal in Reykjavik, don’t miss Gardurinn. This vegan/vegetarian restaurant is a cozy space hosted by friendly souls. They offer a rotating carte du jour with a couple of choices per day, so be sure to check the menu beforehand.

Café Babalu- A colorful, quirky, hodgepodge coffee house with some of the weirdest decorations and knickknacks. This is a wonderful place to sip on some coffee, people-watch, and let the awesomeness of Reykjavik sink into your brain. The vegan chilli is delicious, and so is the carrot cake. 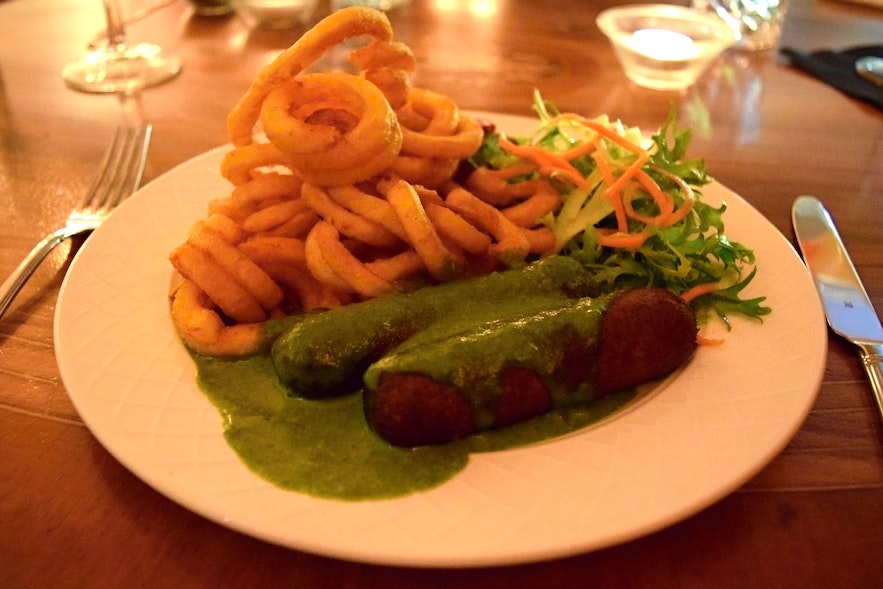 Pylsa/Pulsa- This is a sausage house, so keep in mind that your selection will be limited. However, the vegan sausage here is divine, and their cocktails are some of the best I’ve ever had. The venue also houses an art gallery and hosts a variety of events, like live Icelandic music. It’s really a cool spot, and across from the Phallological Museum (if you’re into that kind of thing).

Bryggjan Brugghus- The first brewery ever to open in Reykjavik, this is an excellent place to go on a date or gather with your omnivorous friends. The vegan options are basic, like soup, burgers, and fries. This is the perfect spot to grab some craft beer with friends and have a light snack.

Núðluskálin- If you need your noodle-fix in Iceland, this is the place. It isn’t a vegan restaurant, but they have vegan sauces and plenty of veggies. While not the same as noodles in the East, it’s a pretty good substitute.

Bike Cave- Offering vegan options and plenty of booze, this family-run burger joint focuses on everything bike-related. As they rent out scooters and tools to fix your bike, this is a superb one-stop-shop.

Kruska – With a focus on healthy food, Kruska serves poultry and fish, with vegan and vegetarian options.

Kryddlegin Hjörtu- While meat is served here, there are many vegan and vegetarian choices. They specialize in soups, salads, and fusion cuisine. The buffet is an excellent value.

The Laundromat Café- This is an international chain with a few veggie/vegan options. The food and drinks are good, but not cheap. Overall, it’s a unique place to visit, and super convenient if you need to do your laundry while you eat lunch. 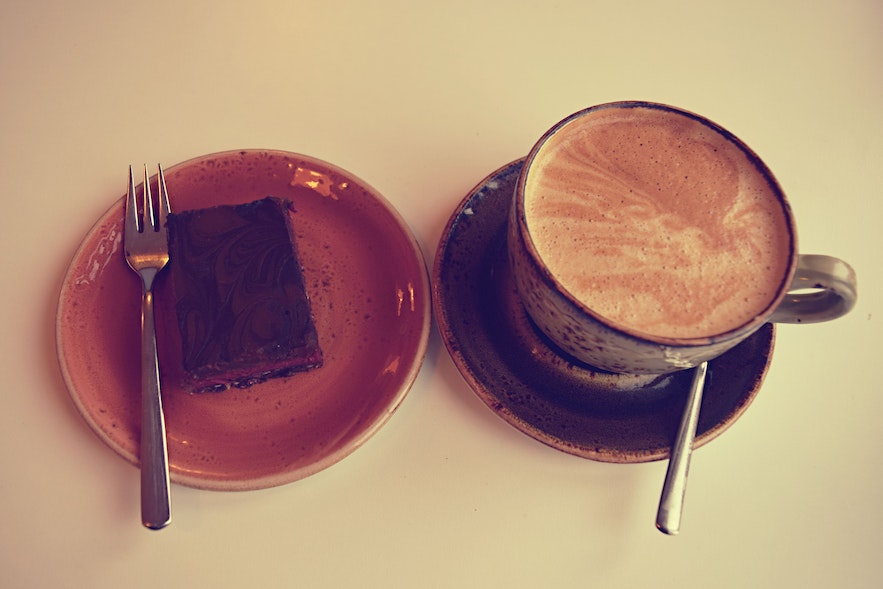 For the Vegan with a Sweet Tooth

Eldur og Is- Skip the Subway down the street and get yourself some vegan crepes instead. They offer both savory and sweet options, as well as piping hot coffee.

C is for Cookie- Don’t let the name fool you; this coffee shop has much more than just cookies. Cozy up with a huge mug of coffee and nibble on one of their vegan cakes. Most of the savory food isn’t vegan, but this is a fantastic place to unwind or get some writing done.

Valdis- As far as I know, this is the only place in Reykjavik that serves vegan ice cream, and it is good. Valdis is just a short stroll away from the Northern Lights Museum, which is worth a visit to learn about what the aurora borealis actually is.

17 Sortir- A few doors down from Valdis, you’ll find this cute bakery that serves up vegan cakes and cupcakes. They’re so pretty that you won’t want to eat them, but you should, because they taste better than they look.

Passion Reykjavík- This elegant bakery is a beautiful place to grab some vegan pastries and coffee before you set out to explore the city. 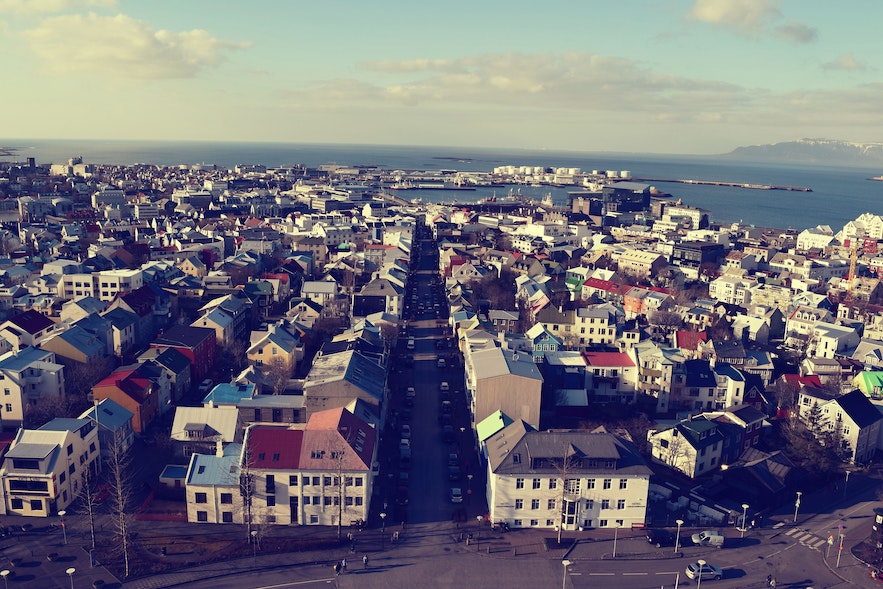 While savoring new, vegan dishes is always enjoyable, you didn’t come to Iceland just to eat. (Though if the theme of your visit is eating and drinking beer, rest assured that you won’t get bored. The craft beer in Reykjavik is amazing.) There is so much to do within the city of Reykjavik, like exploring its street art, admiring its unique architecture, and having locals take you to see the Northern Lights.

There is no shortage of activities in Reykjavik. If you’re already in the world’s northernmost capital, you might as well take advantage and explore the rest of the country. Take a tour, or rent your own car to explore Iceland’s out-of-this-world landscapes.

Whether you’re visiting for the Northern Lights, the vegan food, the glaciers, or the midnight sun, Iceland is a country full of delicious surprises and unforgettable experiences.