Galleries and Museums in Reykjavík

I first visited Iceland when I was granted an internship at the Reykjavík Photography Museum. During these four months in Reykjavík, I was able to visit a number of museums and cultural events that exhibited Iceland’s embrace of their culture and heritage.

I found myself enamoured with Iceland’s attitude towards their culture, in how they handled it, preserved it and built upon it to inspire continued growth. Following this admiration, I have once again found myself living in Reykjavík. Below is just a small selection of the galleries and museums as well as a few events to be found in Reykjavík worth visiting if you are in the capital area.

Located in the same building as the City library and Reykjavík City Archives the Photography museum is located on the top floor at Tryggvagata 15.

Starting as a private company in 1981 (now part of the Reykjavík City Museum) the Photography Museum houses a collection of approximately six million photographs, ranging from amateur photography dating back to 1860 highlighting Iceland’s cultural heritage, to professional collections from commercial photographers, press photography and industrial photography. As well as their archive the museum has two exhibition spaces which look to highlight armature as well as professional photography relating to Iceland. 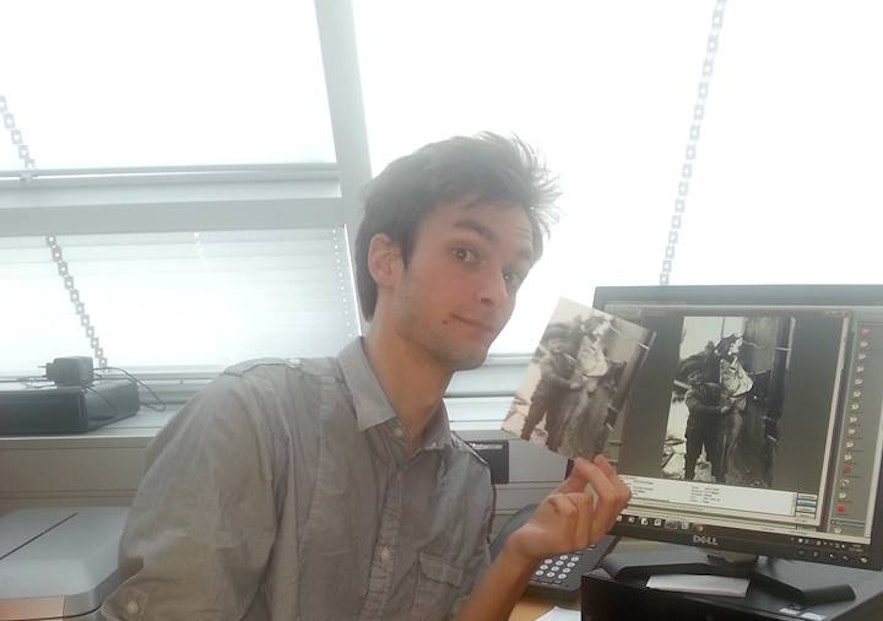 My main role whilst at the museum was to help with the continued archiving of their ever growing collection of donated photography. The largest collection I worked on was a set of glass plates shot by Guðbjartur Ásgeirsson (1889-1965) in the first half of the twentieth century. Guðbjartur shot predominantly in the port town of Hafnarfjordur, capturing a unique view of life there, from family parties, the town’s inhabitants, weddings as well as the fishing community.

The collection they have at the Photography Museum is staggering, giving an amazing insight into life throughout Iceland’s history. Documenting the change from fishing communities to today’s contemporary Iceland. 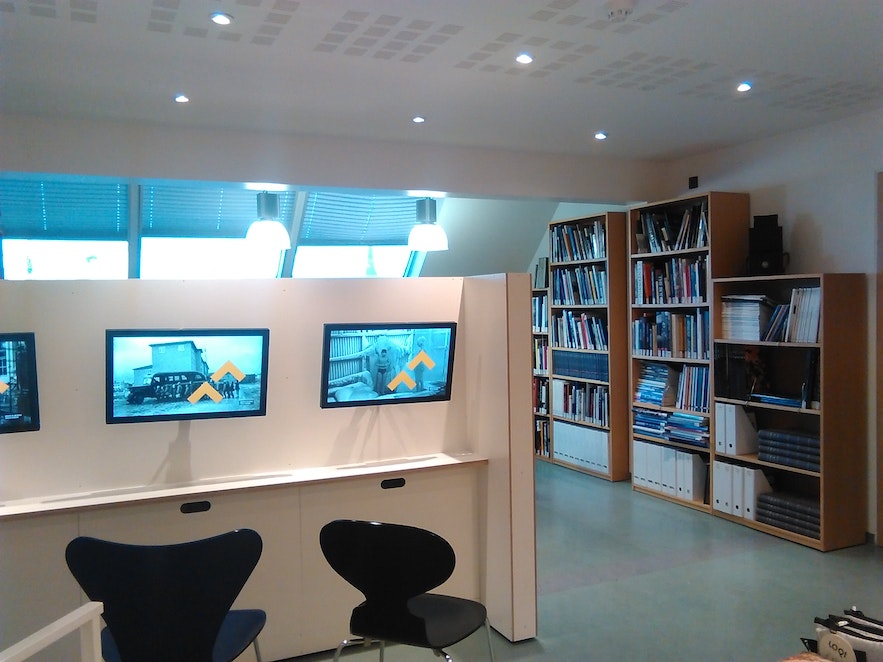 As well as their extensive archive the Photography Museum put on a handful of exhibitions a year, showcasing historical as well as contemporary photography covering artistic, social and cultural contexts.

Some of their exhibitions over the past few years have included shows by the acclaimed Icelandic photographer Ragnar Axelsson. Þorvaldur Örn Kristmundsson’s in-depth look at the disappearing farming communities located in the Westfjords as well as the first solo exhibition of Jóhanna Ólafsdóttir’s photography, depicting 70’s and 80’s life in Reykjavík.

If you’re interested in Iceland’s history, contemporary ideas on photography or just the medium of photography in itself the Photography museum houses a wealth of information, archives, and ideas to explore. 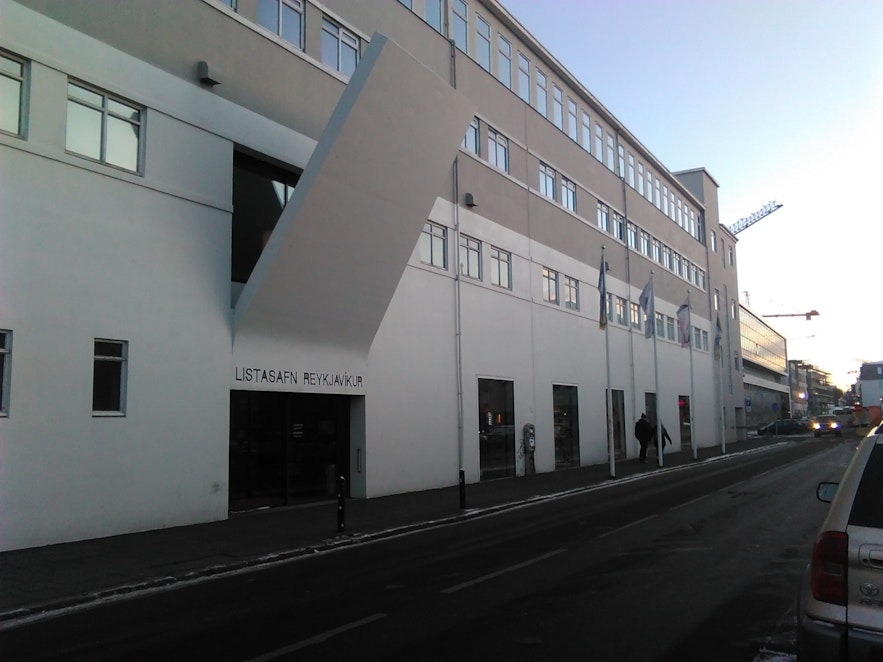 The Reykjavík Art Museum put on exceptional exhibitions year round from leading local and international contemporary artists. A very prominent collection that has a regular fixture at Hafnarhús that was gifted to the Museum by the artist himself spanning over two thousand pieces is the collection of one of Iceland’s most well known contemporary artists Erró. Erró (b. 1932), is known for his pioneering take on Pop art as well as European narrative figuration. A small taster of his work can be found at Keflavik airport. A hand painted ceramic replica of one of his 1999 paintings (Silver Sabler) was installed at the airport in 2017.

Prominent exhibitions that have been held over the past few years at Hafnarhús have included a retrospect of international renowned Icelandic artist Ragnar Kjartansson. Richard Mosse’s haunting video installation ‘The Enclave’, highlighting the conflict in the DRC. As well as an extensive show of Yoko Ono’s career  (who coincidentally a permanent light sculptor on the small island of Viðey, the ‘Imagine Peace Tower’ which can be seen during selected times during the winter nights in Reykjavík).

The Reykjavík Art Museum has another two locations within the city, displaying other facets of Icelandic art. Ásmundarsafn, located in the Laugardalur area is the old home of sculptor Ásmundur Sveinsson (1893 – 1982). The building itself was designed by Ásmundur, the white dome structure taking influence in vernacular Mediterranean architecture. The building is surrounded by Ásmundur’s sculptors and inside you can find more of his work along with works of other modern and contemporary artists.

Kjarvalsstaðir found in the Klambratún Park primarily houses the works of Jóhannes S. Kjarval. Along with arguably one of the most influential Icelandic artists, Kjarvalsstaðir focuses on painting and sculpture exhibitions of established masters of modern art. 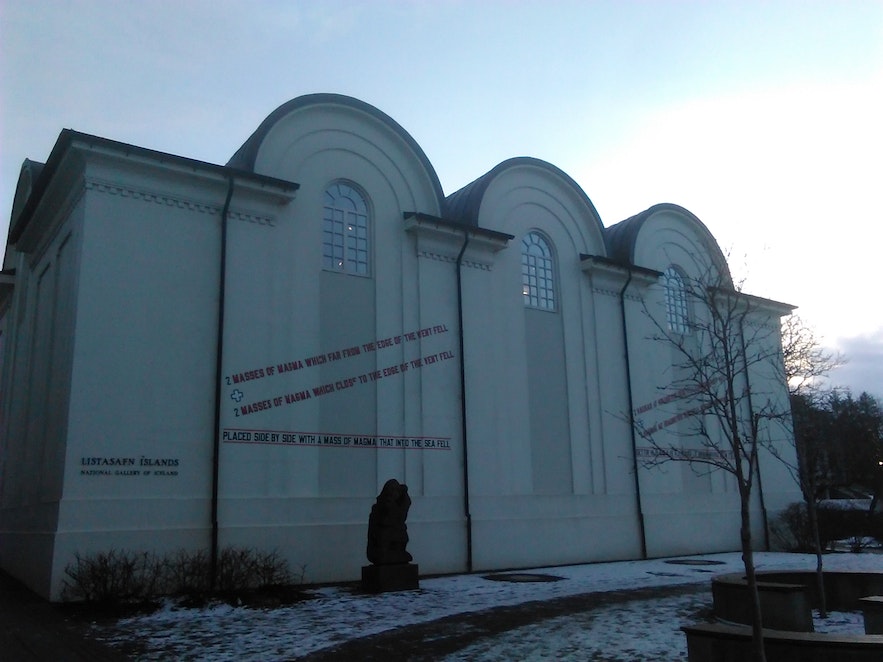 Much like Hafnarhús, The National Gallery of Iceland is located in an amazing historic building. Constructed in 1916 as an icehouse the building itself went through many permutations including disco before becoming the home of the National Gallery in 1987.

The National Galleries main focus is on their collection of 19th and 20th century Icelandic art including works from when the Gallery was founded in 1884 in Copenhagen. Large scale exhibitions by contemporary artists can also be found at the National Gallery.

Two of the most notable exhibitions over the past few years have included Hrafnhildur Arnardóttir’s (AKA Shoplifter) Taugafold VII and a solo show from Berlinde De Bruyckere. Taugafold VII filled the room it was installed in with an immense array of multi coloured synthetic hair hung from the ceiling mutating the gallery space, inviting viewers to interact and manoeuvre within this new space. Berlinde De Bruyckere’s 2016 show comprised of a selection of sculptures as well as paintings focusing on the human and equine figure. With the use of wax and animal hair Berlinde produced powerful distorted and contorted figures confronting the view with their own ideas and personal experiences of our relation to the physical world regarding our bodies.

Within the Galleries possession is also a selection of notable international artists including Edward Munch, Hans Hartung, Richard Serra as well as Karel Apple. Arguably the most famous piece the Gallery owns is the sculpture ‘Jacqueline with a Yellow Ribbon’ (1962) by Pablo Picasso that was gifted to the Gallery by Jacqueline herself.

Located in Grandi you will find Marshallhúsið (the Marshall house) where The Living Art Museum, Kling and Bang as well as Ólafur Elíasson’s new satellite studio are located.

Kling and Bang and The Living Art Museum are both artist run galleries engaging with emerging as well as established, national and international artists looking to push contemporary art and current art dialogue. Elíasson’s open studio gives the public a unique look into the artist's mindset, who’s most recognisable works include the design for the Harpa concert hall and the ‘Weather Project’ that was installed at the Tate Modern's turbine hall.

Having only been open since the tail end of 2015 Listastofan has grown exponentially during that time. Run by a collective of independent artists Listastofan not only puts on exhibitions but life drawing classes, artist talks, workshops as well as book readings.

Run by local artist Freyja Eilíf, Ekkisens is located in the centre of Reykjavík in the basement of her old family home. With the aim to give a platform for emerging artists an amazing show put on before Christmas was a Christmas bazaar, showcasing a multiple of local artist’s works with the opportunity for visitors to purchase selected pieces.

Throughout the year multiple cultural events occur in Reykjavík, opening the doors to many of the galleries and museums. Held during the first weekend of February as part of the Winter Lights Festival, Museum Night sees over forty five museums across the city stay open until late into the evening putting on fashion shows, theatre performances, live music, films as well as lectures.

For four days in the middle of March DesignMarch takes over Reykjavík showcasing the best in Icelandic design as well as a handful of international names.

Potentially my favourite time in the year in regards to cultural events and one of the biggest events in the city is Menningarnótt (culture night). Much like Museum Night earlier in the year but on a larger scale Menningarnótt is a celebration of Iceland’s cultural output. Not only limited to museums and galleries Menningarnótt is created and enjoyed by the city’s residents with business and residential areas opening up to invite people in. Events and activities run throughout the day ending with live music and a fireworks display by the harbour.

These are just a handful of the cultural outputs that can be found in Reykjavík, others to be explored include I-8, Two Ravens, Gallery Port, Gerðarsafn, The National Museum, Safnahúsið, The Nordic House, Bismút, plus many more.