The Shelter of the Gods: The Legend Behind Ásbyrgi Canyon

Imagine you’re travelling in Iceland, a magical and unexplainable land at the best of times. You’ve heard some great stories of the natural beauty around so you head to one of the famous national parks. But just your luck, the day is absolutely awful for sight-seeing.

Heavy fog coming off the glaciers sits like a funeral shroud on the landscape and you’re quite sure the black clouds rolling in from far away are bringing a storm. Visibility is down to whatever’s right in front of your face and your camera sits useless in your rucksack. Disappointed, you decide that you’ll give it ten more minutes before heading back to the hotel, writing the day off, having a drink and seeing what the night has to offer.

Then an almighty sound cuts across the sky. A cracking, crunching, earth-rending noise that makes you instinctively drop to the soft wet grass for protection. A ferocious breeze whirls in from the Atlantic taking with it the murky fog. You lift your head tentatively and gasp at the scene before you.

A vast chasm stretches below in the shape of a perfect horse-shoe. Almighty 100-metre high, sheer stone cliffs curve around a dense green gorge. Surely, you think to yourself, this magical vista could only have been created by the gods. And it’s true, for you’ve just had a close encounter with Sleipnir, Odin’s enormous eight-legged horse!

This is Ásbyrgi Canyon – The Shelter of the Gods, one of a list of cool origin stories for natural wonders put together by hometogo.com. Legend, as well as basic logic, suggests Ásbyrgi came about when the great steed of Odin placed one of his many feet upon Iceland while riding across the sky. The weight of one hoof was powerful enough to punch this 3-kilometre-by-1-kilometre hole in the ground. He was possibly on his way to the Norse underworld of Hel, as he was the only horse capable of carrying his rider there and back unscathed. 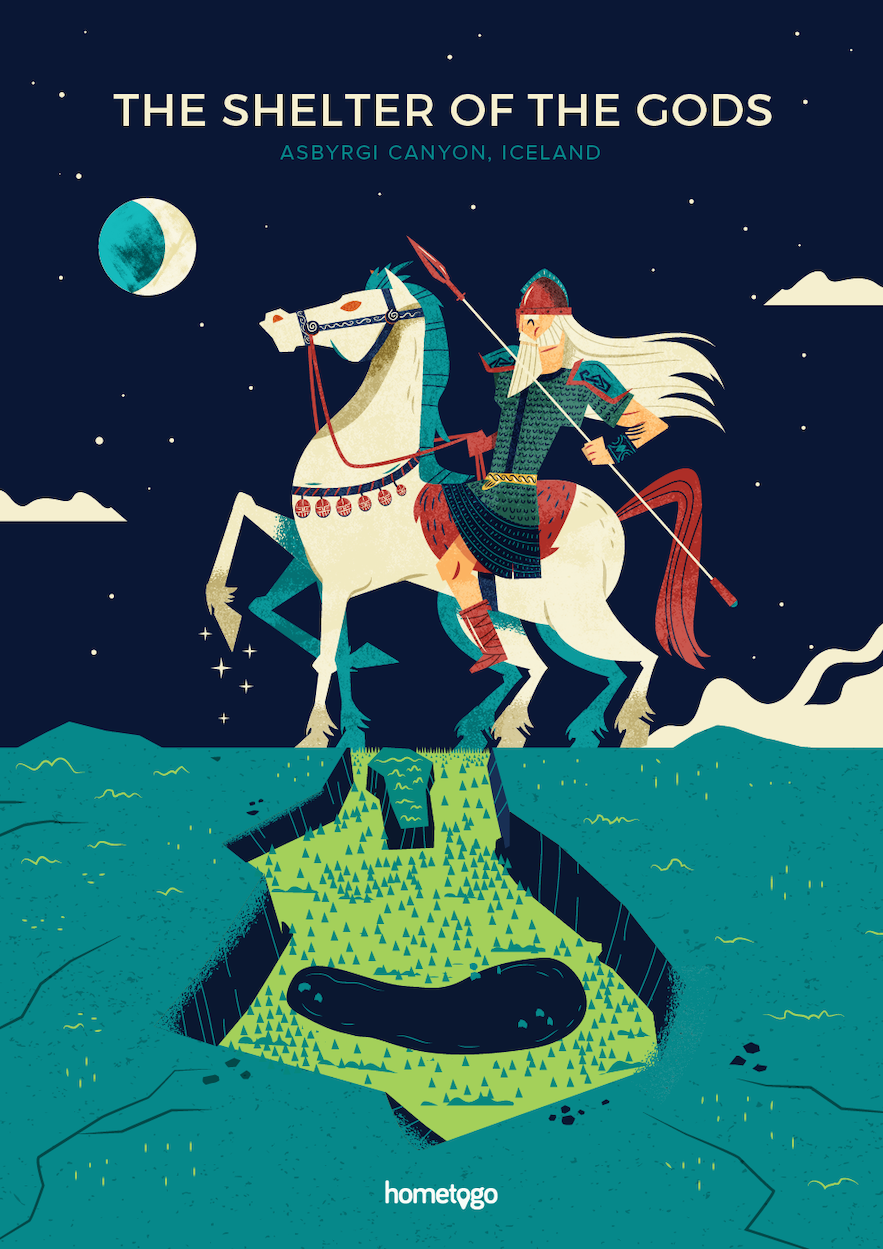 Sleipnir becomes even more interesting when you discover that he was the offspring of Svaðilfari a great stallion and Loki, who was technically a male god but assumed the form of a mare in heat to lead the stallion astray. Not just for fun of course, but to stop the gods from having to pay a troll the sun and moon as wages for building a wall around Asgard. Norse mythology really doesn’t live by anyone’s rules but its own!

On top of that, this magnificent canyon is also the supposed capital of the huldufólk, the little people or elves that are also co-habitants of Iceland. There are many stories associated with these folk in the area, especially at the Botnstjörn pond in the canyon itself.

Of course, there are those rational scientists who would claim that this wondrous site is actually due to successive extreme flooding caused by sub-glacier volcanic activity. According to them the massive flood would have reached a flow of 39,000 cubic metres/second, quite enough to carve such a formation out of solid rock. 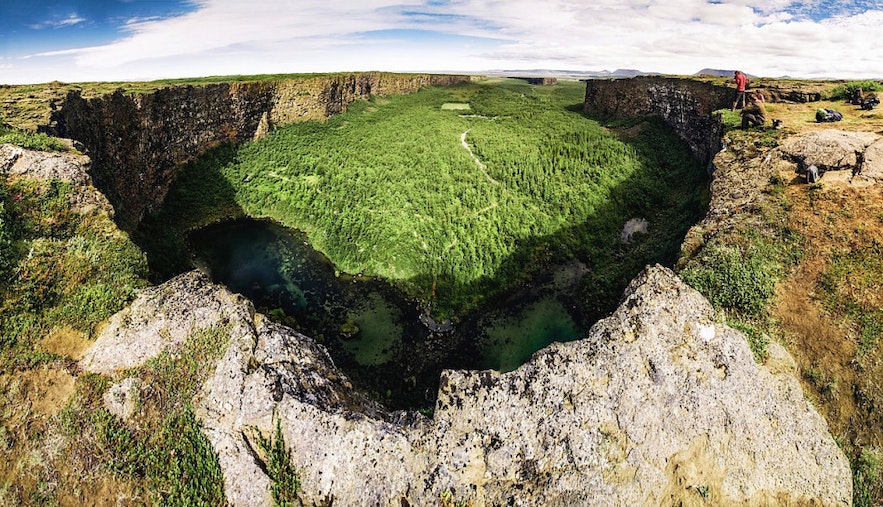 Whichever explanation you prefer, the whole area is filled with spectacular natural wonders. Down on the canyon floor is Hljoðaklettar, a surreal honeycomb formation of rock which roughly translates to the “Whispering Rock”. There’s also the Eyjan, or “island”, hill which rises in the middle, adding to the proof that the area is indeed a hoof print. With so much mythology, history and beautiful wooded scenery the Shelter of the Gods is one of the most spectacular walking trails in Iceland.

The Ásbyrgi Canyon forms part of the Vatnajökull National Park, which is the 2nd largest national park in Europe and accounts for 14% of Iceland’s land area. There you can find Dettifoss, the most powerful waterfall in Europe, with its 100 metre drop as well as Selfoss, its smaller but prettier cousin, less than a kilometre away. There is also Vatnajökull glacier itself, which is the largest in Europe outside the Arctic circle and will have you in awe of its sheer size.

The park offers numerous activities from ice-hiking and pony-trekking to flying across the landscape in snowmobiles. For the more sedate visitor there are renowned geothermal spas to relax in, while during the summer months camping and hiking will bring you closer to Iceland’s flora and fauna.