Bruarhlod canyon is a hidden attraction on Iceland’s Golden Circle, where the Hvita river flows most beautifully.

The only Icelandic tours going directly to the stunning gorge are rafting tours, like this 10-Hour Golden Circle River Rafting Tour. But travelers eager to see it can also book Golden Circle private tours or Icelandic self-drive tours, where the attraction can be an added destination to the itinerary.

Although Bruarhlod canyon is close to famous attractions like the Gullfoss waterfall and Geysir geothermal area, most travelers still overlook this hidden gem. But it’s worth seeing, with the gorgeous water contrasting the sides of the canyon’s unusual rock formations.

Photo from Wikimedia, Creative Commons, by Paul Busse. No edits made.

Bruarhlod canyon, spelled Brúarhlöð in Icelandic, is a magnificent canyon in West Iceland. Its main features are its otherworldly pillars and cliffs, carved out by the mighty Hvita river over the centuries.

The canyon lives up to the geological extremes of Iceland as the land of fire and ice. Bruarhlod’s walls are of breccia rock or hyaloclastite origins, more commonly known for their sediments and glass composition. These rocks were the products of volcanic and tectonic events in the country, like eruptions and earthquakes.

The raging waters of the Hvita river greatly influenced the current canyon form. As one of the most voluminous rivers in Iceland, Hvita’s water current is powerful. That is why it was able to pass through and deepen the cliff of Bruarhlod canyon throughout the ages.

Unlike its counterparts in the country, like the Jokulsargljufur canyon, Bruarhlod is relatively narrower. But it is deep and steep with the powerful current of the Hvita river.

There are many ways in which tourists can see the beauty of this canyon. It may not be as famous and grand as its neighbors in the Golden Circle, but the Bruarhlod canyon can still give you a thrilling experience.

Hiking and Sightseeing in Bruarhlod Canyon

If you’ve ever wanted to go hiking in Iceland but have feared the difficulty of terrain, Bruarhlod canyon is a great choice for an easy trek.

The short hiking trail winds up to the canyon, and as you get nearer the attraction, you will see plains covered by grasses and mossy rocks, especially during summer. The land can be an excellent spot for a picnic if the weather is good.

Upon reaching the top of the canyon, you will have the best vantage point. This position shows the pillars and dark rock formations in all their glory.

River Rafting on the Hvita River 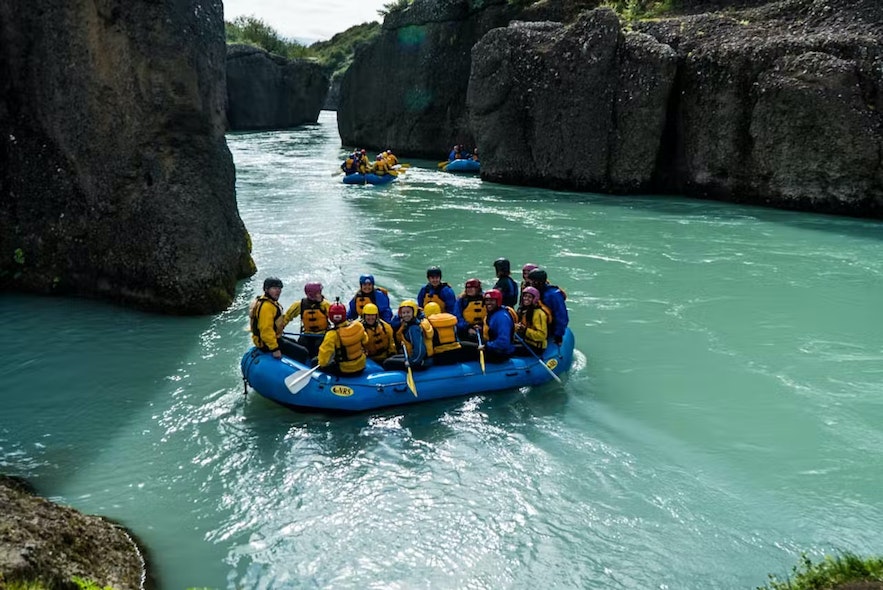 The chalky water of the Hvita river creates a glowing illusion against the dark rock sides of the canyon. The water originates from the Langjokull glacier and is filled with fine glacial sediments.

The beautiful appearance of the cold water on a sharp, fast-flowing current is the perfect recipe for an adventurous Icelandic river rafting trip. Rafting is very popular along the river and gives you an entirely different point of view, giving the canyon new depth and showing you a different kind of beauty. It’s a great way to enjoy the canyon, the river, and the local area.

On the other hand, travelers may want to avoid visiting after periods of heavy rain because the trail is prone to flooding in those conditions.

History and Folklore of Bruarhlod Canyon

Like many of the tourist attractions in Iceland, Bruarhlod canyon has a rich history and folklore.

Icelandic local folklore says that the two pillars from the lookout point at the top of the trail are trolls. The shorter one is described as a female troll, while the other one, who seems to have a dog on its head, is the male troll. The story explains that the trolls were stuck out in the river when the sun rose and turned to stone.

Besides the legend of the trolls, the river has an extensive history with bridges.

The first bridge was built in 1906 but was washed away by river flooding in 1929. Although a replacement bridge came right after, another tremendous flooding destroyed it the following year.

Fortunately, the bridge built in the 1950s remains today. The bridge can accommodate cars and horses. Until 2010, this bridge served as the main local and traveler route between the villages of Reykholt and Fludir in Southwestern Iceland.

How to Reach Bruarhlod Canyon

Bruarhlod canyon is about 72 miles (116 kilometers) from Reykjavik. Tourists from Iceland’s capital should take Route 49 to Skeida- og Hrunamannavegur in Southwestern Iceland. From there, travelers may access the canyon through Route 30.

Meanwhile, for sightseers from the Golden Circle, you should pass by Route 30 at least once, and you can take your opportunity then. If you head further south, there’s a small dirt road where you can find the parking lot for the canyon’s trail.

Bruarhlod Canyon is in the Golden Circle area of West Iceland. It has a ton of nearby attractions, many of which are more popular and well known. Waterfalls, lagoons, geysers, and national parks make up these destinations.

Firstly, there are several waterfalls in the area you should stop by if you’re interested in rivers and beautiful sights. For example, Gullfoss waterfall, Faxi waterfall, and Bruarfoss waterfall are all within a reasonable distance.

Gullfoss waterfall is one of the three major attractions in Iceland’s Golden Circle, just seven miles (12 kilometers) from the canyon. The mighty Hvita river flows in both these attractions.

Furthermore, the area has active geothermal activity, so hot springs are everywhere. The Geysir geothermal area is a geological wonder with colorful terrain and hot springs. You can catch boiling water spouting from Strokkur every eight minutes or so. 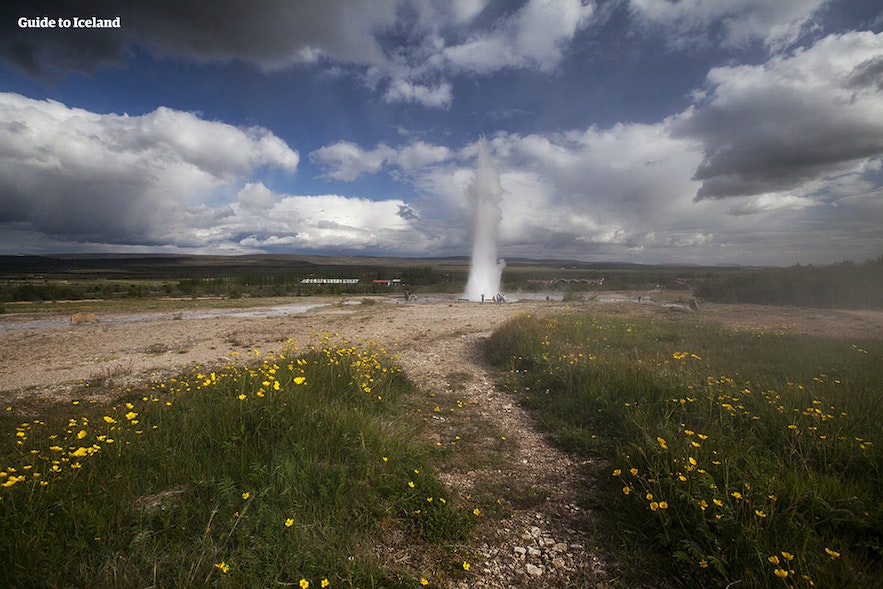 Meanwhile, Iceland’s oldest swimming pool is not far from here. At  Secret Lagoon, you can have a relaxing hot spring dip.

Depending on the time of year, you can enjoy different activities at these locations. During summer, rafting in the Hvita river and Bruarhlod canyon are popular. Travelers and locals can also enjoy riding snowmobiles on the glacier near the Gullfoss waterfall during the winter.