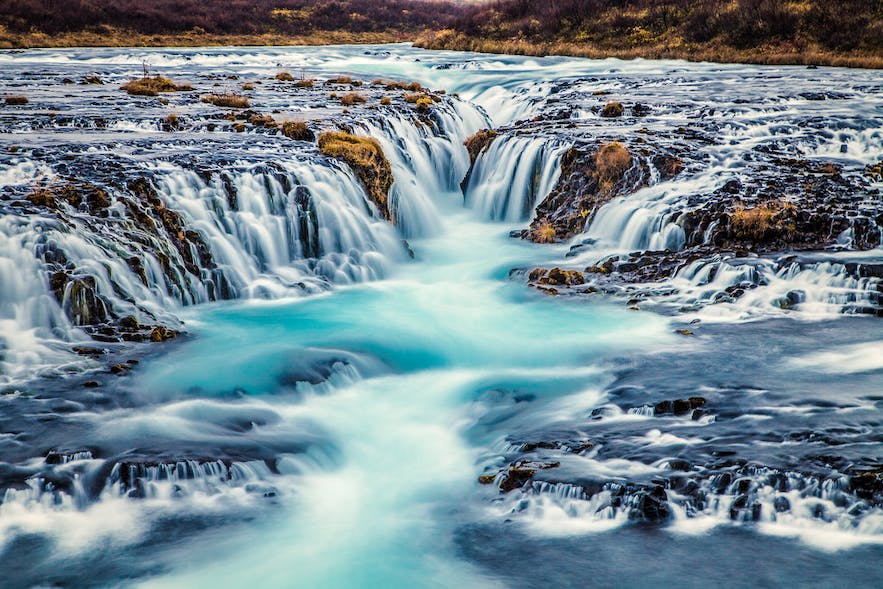 Brúarfoss ('Bridge Falls') is a relatively small waterfall compared to many of its Icelandic counterparts, but its diminutive size does nothing to take away from its staggering beauty. Both locals and seasoned travellers regard Brúarfoss as one of the country’s hidden gems, often labelling it 'Iceland’s Bluest Waterfall.'

You can, of course, rent a car or take a trip around the Ring Road and reach it yourself, but if you want a visit incorporated into a greater holiday, there are options such as this 10-Day Self Drive or this 6-Day Guided Package.

The glacial river Brúará falls 2-3m, ending in a U-turn at the base of the waterfall, where the river is concentrated into a deep crevice that runs through the centre of dark volcanic rock formations. This creates sky-blue rapids that almost defy the imagination—and the vistas are made all the more beautiful by the surrounding, lush green flora, which provides a stark contrast to the flowing water.

Brúarfoss makes up just a small part of Brúará, whose origins lie in the mighty Hvita river which runs from the glacier Langjökull.

Brúarfoss is found in the west of Iceland, roughly one hour and twenty minutes east of Reykjavik. The waterfall takes its name from a stone arch that once stood over it, acting as a bridge for those who wished to cross.

According to legend, this natural stone bridge was destroyed in 1602 by a minion of the Skálholt episcopal see. At that time, Iceland was suffering a severe famine, and by destroying the bridge, the minion prevented the starving peasants from reaching the bountiful lands claimed by the church.

On July 20th, 1433, the Danish bishop, Jón Gereksson, was drowned in the waterfall after being placed in a bag, tied to a large stone and thrown in. Though details are somewhat hazy, it seemed that Jón had, in a jealous rage, attempted to murder the lover of a young woman named Margrét Vigfúsdóttir. In return, she swore her heart to any man willing to avenge the murder attempt and, thankfully, the son of a chieftain, Þorvarður Loftsson, was there to oblige her.

There has been much discussion in Iceland, concerning the steadily increasing stream of travellers who visit the area and trample its delicate natural landscapes.

The walking path to the waterfall is on private property and is now closed to the public.

This is due to disrespectful treatment of the path and littering in the surrounding area as well as the discovery of human waste and toilet roll in the foliage. This is a case of the few ruining it for the many and should serve as a reminder to always treat nature with consideration.