Spend three days in Iceland exploring the country’s volcanic environment with this affordable self-drive tour. Visit the Golden Circle and spend time relaxing in the geothermal waters of the Blue Lagoon, Secret Lagoon or a hot spring river. Any free-spirited traveller who wants to save a buck should grab this opportunity now.

You don’t have to worry about being rushed on this tour, as you are behind the wheel, so you get to decide where you go and how long you stay. Upon booking you’ll receive a personal itinerary guiding you to some of the country’s most popular attractions as well as gems hidden in canyons, hot spring areas and lava fields.

Over the course of three days, you’ll journey around the moon-like lava fields of the Reykjanes Peninsula to discover the region’s active environment, and see erupting geysers and cascading waterfalls on the Golden Circle route. At the end of each day, you’ll get to unwind in the naturally warm waters at some of Iceland’s many geothermal pools, lagoons or hot springs.

You will also have the choice of hiking through a geothermal valley, where steam rises from the ground as you trek past trickling streams and colourful mountains, or driving along the South Coast to visit some of the country’s most beautiful waterfalls, passing mighty glaciers on the way.

Make the most of your days in Iceland with this immersive self-drive tour that won’t break the bank. Check availability by choosing a date. 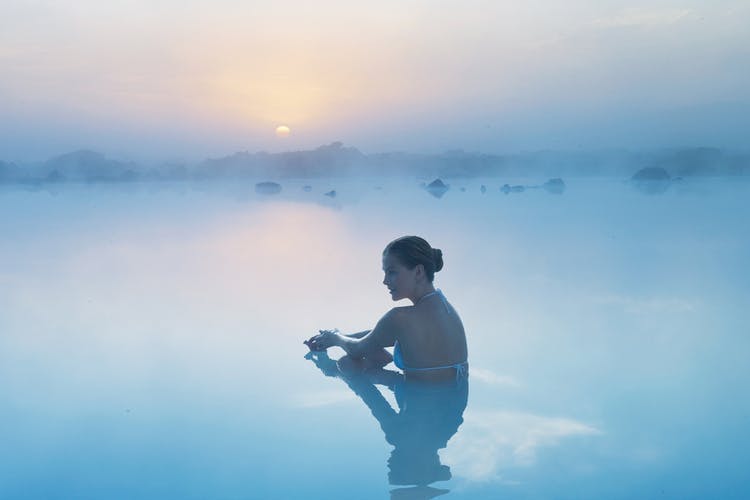 After you land at Keflavík International Airport, you can start your Icelandic adventure right away by picking up your car and exploring the otherworldly landscapes of your surroundings. The airport is located on Reykjanes Peninsula which is characterised by immense lava fields and great geothermal activity.

The peninsula lies on the boundaries of the Eurasian and North American tectonic plates. As the plates drift apart, they create gaping rifts in the surrounding environment. Make your way along Reykjanes’ west coast to the Bridge Between Continents, a small footbridge that crosses a major fissure created by these plates. You’ll be rewarded with spectacular views and clear evidence of the tectonic shift.

From there, you can head to the colourful geothermal fields of Gunnuhver where you’ll find bubbling mud pools and steaming fumaroles. As you hear the noises of bubbling water and steam bursting out of the ground, you’ll be reminded of the great powers that move underneath the Earth’s crust.

Before you get to your accommodations in Reykjavík, you could stop at the Blue Lagoon for a soak in the warm, geothermal waters of the spa, encircled by the black lava fields of the peninsula. It is a great way to relax after a day of travelling and sightseeing. Just remember to book tickets to the lagoon in advance.

The Golden Circle and the Secret Lagoon

On your second day in Iceland, you’ll explore the popular tourist trail of the Golden Circle, which will give you a better insight into Iceland’s active landscape.

Your first stop is the National Park of Þingvellir where Iceland’s parliament, Alþingi, was founded over a thousand years ago. This is where the Viking settlers of the country came to settle disputes and create the laws of the land.

Like the Reykjanes Peninsula, Þingvellir also lies on the boundaries of the two tectonic plates, and scattered around the park are cracks and fissures, formed in past earthquakes created by the movement of these plates.

From there you’ll move on to the Geysir geothermal fields. Like Gunnuhver, the area is filled with bubbling mud pools, hot springs and fumaroles but unlike Gunnuhver, the Geysir area has erupting geysers! The most active one is Strokkur, which erupts in a large water column that can reach heights of 20 metres. This is a great place to snap a selfie, as Strokkur erupts every 5-10 minutes, giving you plenty of opportunities to capture an amazing photo.

From erupting geysers, you’ll move on to one of the country’s most beautiful cascades, Gullfoss. Fed by Iceland’s second largest glacier, Langjökull, this two-tiered waterfall tumbles down 32 metres into an ancient canyon. From two viewing platforms, you can watch as the freezing glacial water plunges dramatically down the gorge, providing you even more opportunities for spectacular photographs.

Make a detour before returning to your accommodations in Reykjavík and visit the town of Flúðir where you’ll find the Secret Lagoon, Iceland’s oldest swimming pool, and wash away any tension in this beautiful setting. The landscape around the pool consists of mossy lava fields, hot springs, steaming fumaroles and a small, erupting geyser which gives the place a magical air of mystery. 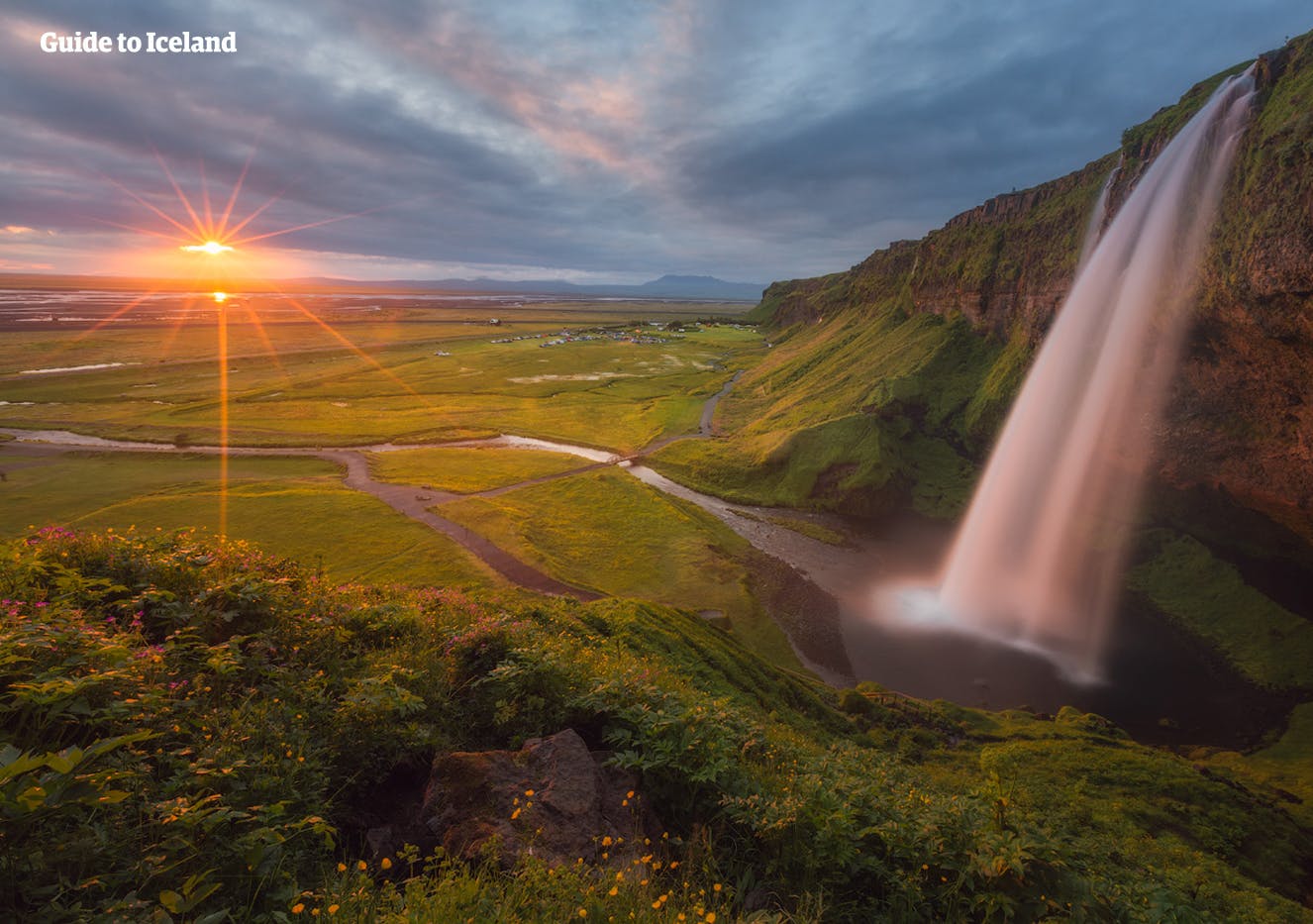 Today you’ll have the choice between driving the South Coast to visit majestic waterfalls or hike through the geothermal valley of Reykjadalur to bathe in its warm rivers. Just make sure you arrive at Keflavík International Airport in good time for your flight as this is the last day of your holiday.

Start the day by heading out of Reykjavík and drive towards the town of Hveragerði; you’ll be greeted by large columns of steam when you reach the town as it is located in a highly geothermal area. If you chose to spend the day hiking, this is where you’ll park your vehicle and put on your hiking boots.

You’ll hike through a colourful geothermal area, past bubbling mud pools and steaming hot springs. Make sure to bring your bathing suit, because as you make your way through this picturesque valley, you’ll come across a trickling river where fresh spring water meets steaming geothermal water, creating the perfect temperature for bathing.

If you chose to spend the day chasing waterfalls, you’ll continue through the town of Hveragerði and make your way towards the first attraction of the day, Seljalandsfoss waterfall.

This unique cascade tumbles over a concaved cliff face, making it possible to walk behind the stream of falling water for a spectacular view of the surrounding landscape. A short walking distance from Seljalandsfoss is a small hidden gem, Gljúfrabúi waterfall, which is partially concealed by huge rocks.

You’ll then travel to the large and majestic Skógafoss waterfall which cascades down a 60-metre cliff with a width of 25 metres. The land underneath Skógafoss is very flat, making it possible to walk right up to the wall of water and feel the mist of the waterfall's spray on your face.

If you still have time before your flight, you can visit Seljavallalaug swimming pool, located a short drive from Skógafoss waterfall, to soak in the warm, geothermal waters of Iceland once more before you leave.

Below you can see the car rental options available for this self-drive tour. All our vehicles are new or current models, of maximum 2 years of age. Super Budget levels come with standard CDW insurance, while all other levels also include Gravel Protection (GP), and Super Collision Damage Waiver (SCDW) insurances. Please note that off-road driving is illegal for all types of cars. All levels come equipped with a GPS and free Wi-fi. You can enjoy unlimited data with the Wi-Fi device, which can be connected to up to 10 devices at once. The car rental will provide 24-hour roadside emergency services. Age requirement for each level can be found below. For all levels, the driver must possess a valid driving license for at least one year before the date of the rental. We recommend Budget 4X4 level for summer driving and Comfort 4X4 for winter driving.

A medium sized 4WD (4x4) jeep or SUV such as a Toyota Rav4, or similar. Comfortably fit up to 4 travellers with 3 large pieces of luggage. Fit for most travel and good for snow and off-asphalt driving. Has basic highland capabilities. The driver must be of 21 years of age or above.

A large 9-seater van such as a Renault Trafic (2WD manual), Mercedes Benz Vito (4WD automatic, has highland capabilities and better suited for winter driving), or similar. Comfortable for 5 to 7 travellers. If seated full, luggage space is limited. The driver must be of 23 years of age or above.

Are you looking to try some of the best dishes Iceland’s top restaurants have to offer? You can now add delicious meals to your booking without having to research where to find them. Select this option to include dinner every night as an extra, and we’ll provide you with vouchers as part of your booking confirmation. We’ll choose the top-rated restaurants that fit with your vacation itinerary and make your reservations for you. Your server will offer you a set menu of two to three courses at the restaurant, from which you can choose meat, fish, or vegetarian options. If you prefer to try a different dish, the meal voucher will act as a credit that you can redeem at the restaurant against menu items that are not part of the set menu. Save time and effort during your vacation, and let us take care of your meals for you. Choose the meal option today so you’ll be guaranteed to eat well on your forthcoming trip. Please notify the restaurant on arrival about any dietary requirements. Vouchers are non-refundable.