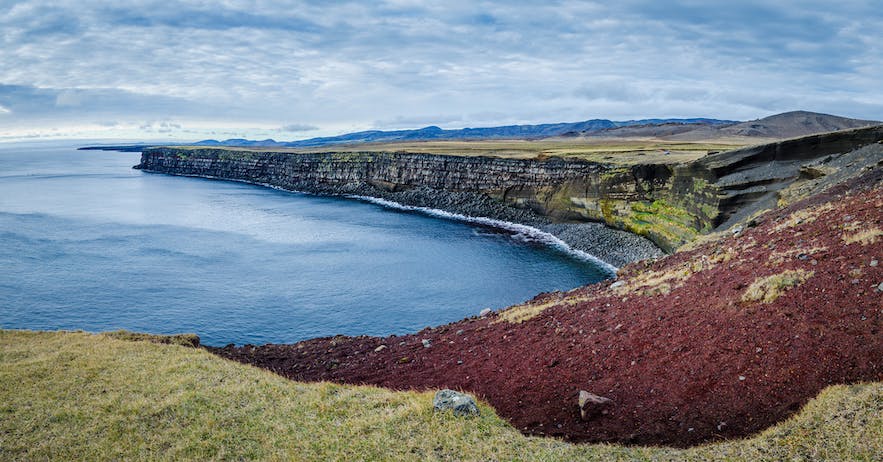 The great stretch of cliffs at Krýsuvíkurbjarg are amongst the best bird-watching sites in Iceland; in summer, 60,000 residents nest within the sheer face, including favourites such as puffins and peewits. As we travelled there on a snowy, February morning, however, we knew that our experience of this place was going to be rather untraditional.

Before I go on, I must emphasise: this is not a standard sightseeing location in winter. Firstly, most of the birds that call the cliff home are migratory, so you cannot expect to see the abundance of life that makes Krýsuvíkurbjarg famous. Secondly, it can be pretty difficult - and scary - to reach.

I travelled there with my fellow blogger Regína, her husband and her father-in-law, and felt rather a lot safer being driven by an experienced Icelander who was familiar with icy roads. Still, however, I can't say that I was comfortable. The road there was covered in what must have been about a foot of snow, hiding it amongst the lava fields.

It tested both the capabilities of the four-wheel-drive we were in and the driving skills of Regína’s father-in-law; thankfully, both rose to the challenge without an issue. 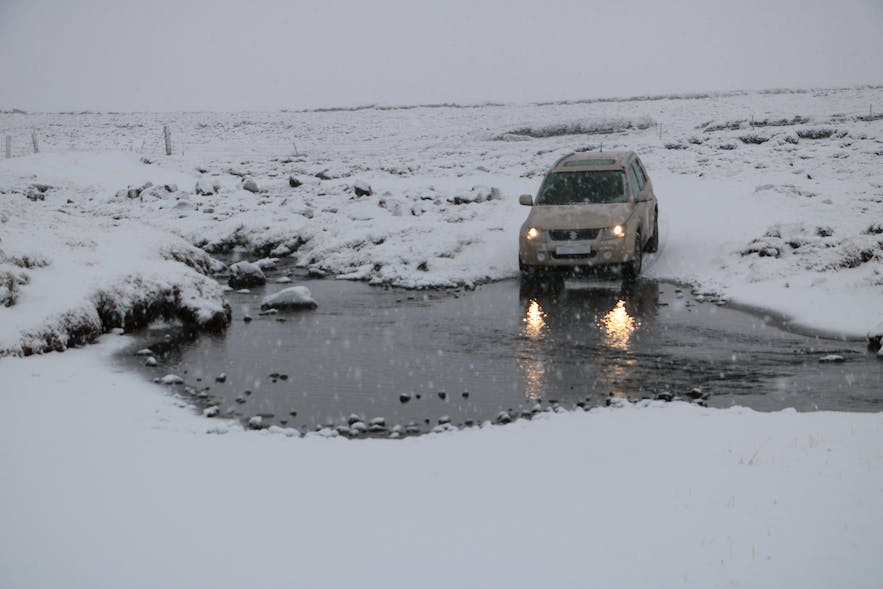 I have a fair amount of experience driving in Iceland’s wintery conditions, but I would have never dared take the road by myself. If you are planning to visit here in winter, then please, only do so if you are very experienced with driving on roads like this, or have a guide who is. You will also need a suitable four-wheel-drive vehicle.

The road to Krýsuvíkurbjarg is usually very scenic; you drive by the Bláfjöll mountain range, within sight of many active volcanoes, and around the lake Kleifarvatn, parts of which bubble, due to the hot springs beneath it. On this day, however, the weather obscured most of this from us; the visibility was so poor that the lake looked like it opened out into the ocean.

Even so, however, the shadows of the peaks and the twisting lava fields hiding behind a veil of snow were haunting and dramatic. I was left in no doubt as to why so much of the folklore in this region references vengeful ghosts and malevolent spirits.

The carpark (or, I should say, what we presumed to be the carpark, it was hard to tell) is about 3 kilometres from the main road, down a twisting trail through the lava; the cliffs are just a minute’s walk away. Before we could see them, however, we could hear, even over the high winds, the crashing of great waves against the rocks.

The sound of the ocean’s power was quite mesmerising and certainly reinforced the feeling that this was not the safest place to be in such rough weather.

When Krýsuvíkurbjarg materialised, it was quite as magnificent as the pictures had led me to believe. The black cliff face dropped sheerly from the snowy plateau we were on, straight into the ocean; even in the grey conditions, the water was a beautiful blue, and the foam bursting as the waves broke on the rocks was a powder white. Up to 40 metres (131 ft) high, they were an impressive sight in and of themselves. 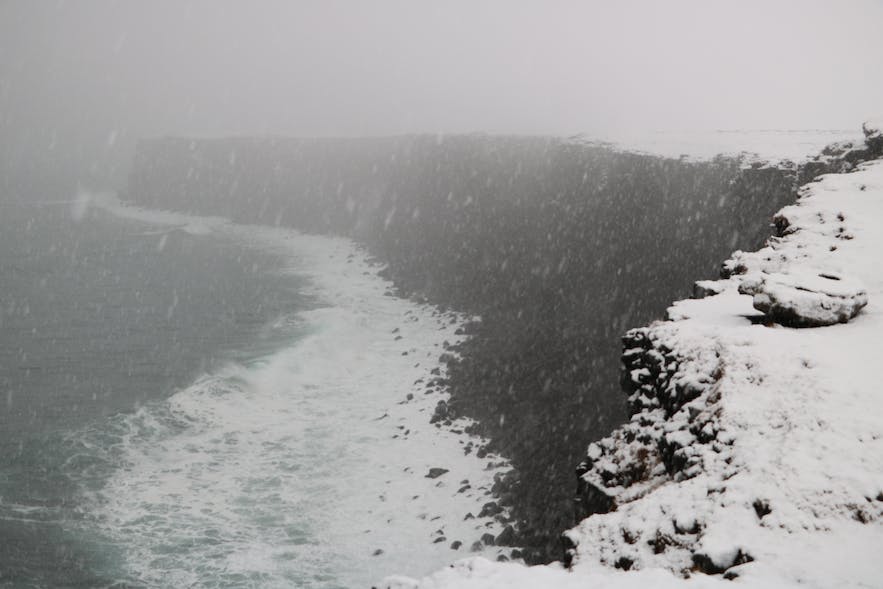 Whenever I am by the coast, anywhere in the world, I keep a keen eye out for whales, dolphins or seals, and had a great vantage point to do so here. I thought I spotted one of the latter, having read that they were not uncommon in the area, but it turned out to be a bird, relaxing on the churning, icy waters as if it was resting in the tropics.

There were, in fact, more seabirds present than I expected; even in the winds and snow, there were quite a few gulls and fulmars swooping out to sea.

It was a nice insight into how these cliffs will look in a few months, at the height of breeding season; I will definitely be back to see how they change. I expect them to be similar to one of my favourite places in Iceland, the bird cliffs at Látrabjarg in the Westfjords.

I went there last May, and was speechless at the thousands of creatures nesting, and thrilled when I realised how little fear of humans they had; a pair of puffins let me within just a few feet without paying me any heed. I'm excited by the fact that there is something comparable so close to Reykjavik. 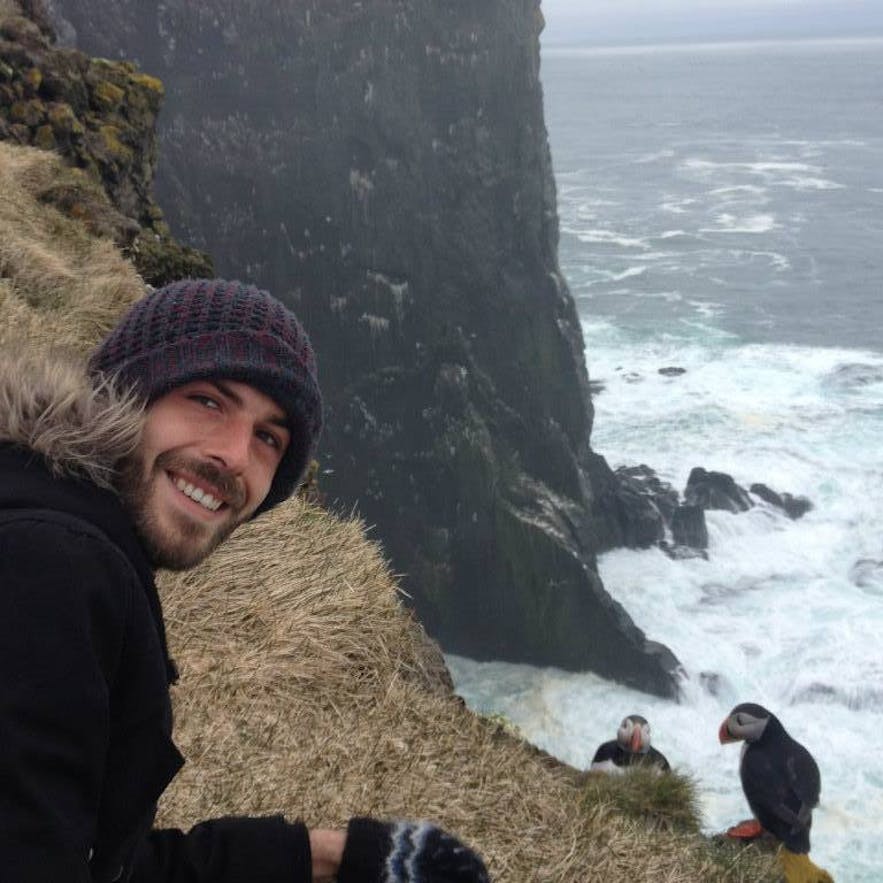 If you are an avid birdwatcher, you can read more about the best bird-watching locations and tips here.

If it were summer, we could have spent hours exploring; the cliffs stretch on for 15 kilometres, with trails running all along it. With the weather as it was, however, it did not seem possible to safely or comfortably hike any further. The road we had driven on continued ahead to other vantage points but became quite steep as it left the first carpark, so we also decided against testing our luck on it.

Such as it was, we absorbed the sights and took our photos until the chill got to us, then returned to the car for an uneasy drive back to the main road. Besides, we still had two unique destinations to reach on our adventures along the Reykjanes Peninsula: the haunting ruins at Selatangar, and the unusual pool formation of Brimketill. 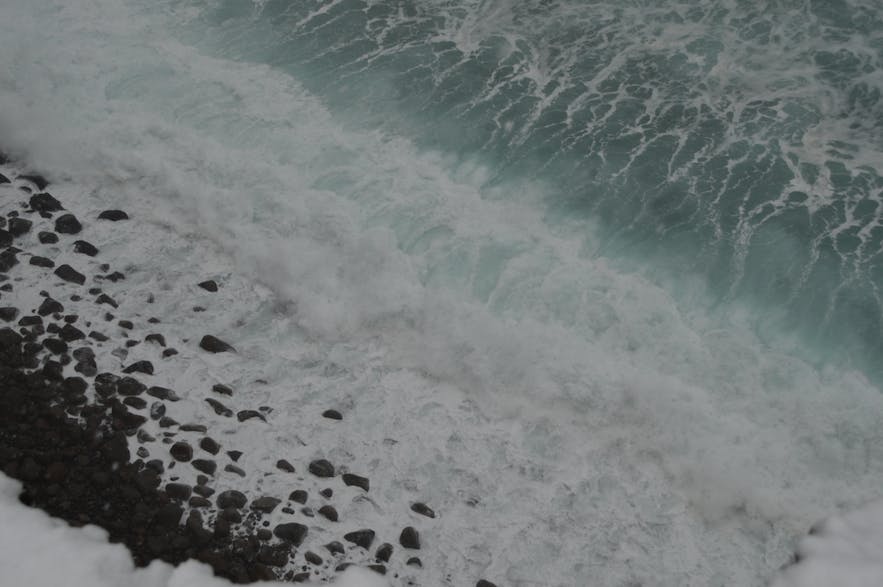 Krýsuvíkurbjarg is located about 45 km from Reykjavík. From Reykjavík, drive towards the international airport (Route 41), but turn left onto Route 42 shortly after leaving Reykjavík towards Krýsuvík. Drive Route 42 to its end and you'll hit Route 427. Park your car at a suitable place on Route 427 and hike over to the cliffs that are 130 m (427 ft) south of the road.