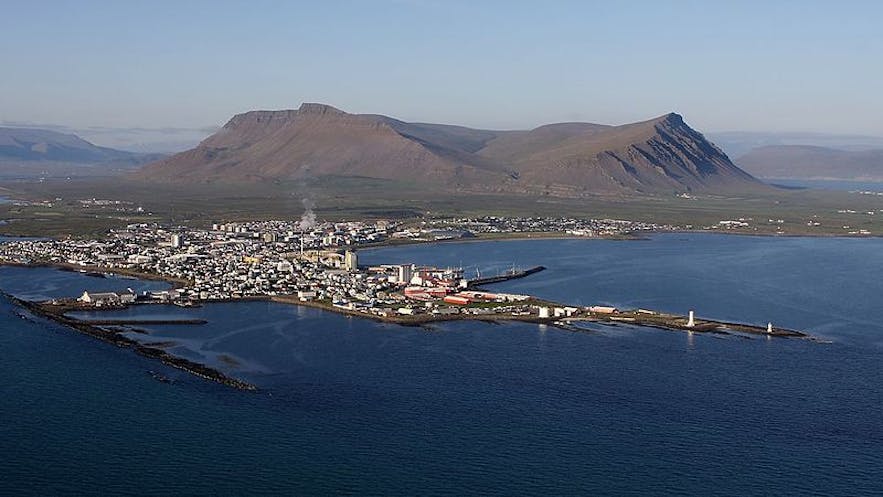 Akranes is a port town in the west of Iceland, approximately 42 kilometres (26 miles) from Reykjavík.

It sits at the tip of the peninsula separating the fjords of Hvalfjörður and Borgarfjörður.

Explore these areas while on a self drive tour in Iceland.

Settled in the 9th Century by Irish brothers, Þormóður and Ketill, the town of Akranes only began to take full shape in the mid-1700s.

In 1942, the town was officially chartered and saw a great surge in its population growth. Today, Akranes has a population of approximately 6,700 people. An important service centre for surrounding regions, Akranes is expected to continue growing in future years.

The town holds both a cement plant and a nearby aluminium smelter, though fishing is still the largest contributor to the town’s economy. Akranes is also known for its strong footballing tradition. The town boasts one of the country’s best football teams, Íþróttabandalag Akraness.

The Akranes Folk Museum at Garðar is the cultural hub of the town, consisting of a folk museum, a few 19th and 20th-century houses and boats, the Iceland Sports Museum and various temporary exhibitions.

The houses open to visitors are the Garðar house, the first concrete house in Iceland, originally built as a vicarage in 1876; Neðri-Sýrupartur from 1875, the oldest preserved timber house in the Akranes area; Sandar-Vestri, a 1901 working class family’s home; as well as the Folk Museum and the exhibitions of the Museum Hall.

The town sits at the base of the domineering basalt mountain, Akrafjall. The mountain top has some of the best panoramic views of west Iceland, from Faxaflói Bay to the Reykjanes Peninsula to Snæfellsjokull Glacier.

The Akranes Lighthouse in Breiðin (only recently opened to the public) has fantastic views over the bay and town and is operated by an amateur photographer who uses the lighthouse interior as gallery space.