Akureyri International Airport is a single-runway airport that serves as the main gateway to the beautiful region of North Iceland.

As the only international airport in North Iceland, travelers often use Akureyri Airport as their entry point to the entire region. The airport is incredibly convenient for those who prefer a faster trip, whether to join whale watching tours in Husavik, visit Lake Myvatn, or just explore the scenic town of Akureyri.

Although the airport only features a single runway, it can still cater to daily domestic and international flights, mainly in Reykjavik and European cities. It is open all year round with a regular daily schedule of 07:00 to 23:00.

Photo from Flickr, Creative Commons, by Jaime Silva. No edits made.

Akureyri International Airport (AEY), locally known as Akureyrarflugvöllur, is located in the charming town of Akureyri. The municipality is commonly referred to as the ‘Capital of the North’ because it is the second largest city in Iceland after Reykjavik, although its population is just around 20,000.

The airport's exact location, just around two miles from the city center, is strategic and advantageous for both locals and tourists. Many accommodations, shops, restaurants, and even museums you can visit before joining tours in North Iceland are all over Akureyri.

Getting to the airport of Akureyri from Reykjavik and other locations is relatively easy. Public and private transportations are available daily on specific schedules.

Reykjavik to Akureyri Airport via air transport. The fastest and easiest way to reach Akureyri is via a domestic flight from Reykjavik Airport. Although this is also the priciest option, it can save you a lot of time as travel time only takes around 45 minutes.

Reykjavik to Akureyri via public transport. Another way to go to Akureyri Airport from Reykjavik is by public bus. Straeto bus network operates bus transfers between these two destinations multiple times weekly. For this cheapest option, travel time is nearly seven hours as the route is 243 miles (391 kilometers) long.

Reykjavik to Akureyri via self-drive car. The last option is renting a car and driving to Akureyri. This may be the most physically demanding route, but it can be rewarding. Driving on the Ring Road up north will give you an excellent opportunity to see some of Iceland’s most beautiful attractions. The estimated travel time is nearly six hours on the 243 miles (391 kilometers) route.

On the other hand, if you’re traveling from Keflavik International Airport, you may need to go to Reykjavik Airport first, as the latter operates Icelandic domestic flights.

Finally, if you’re coming from the town center of Akureyri, you can ride a bus or taxi or choose to walk. There is a walking path along the coastline between the airport and Akureyri center. Both options involve the two miles (three kilometers) route.

Before becoming one of Iceland’s four recognized international airports, Akureyri Airport had a colorful history.

Scheduled air travel became available in Akureyri as early as the 1920s via seaplanes from Reykjavik. However, the airline that operated this service was short-lived.

It wouldn’t be until a decade later that two new airlines would again operate in the town. For example, Flugfelag Islands and Loftleidir airlines flew seaplanes to Akureyri from Iceland’s capital.

Construction of the airport itself underwent several stages, starting in the 1950s. Two decades later, the two major airlines operating in the area merged into what is now known as Icelandair. Meanwhile, more commercial air carriers have been added to Akureyri Airport’s roster in the last 20 years, including Norlandair and air ambulance operator Myflug. 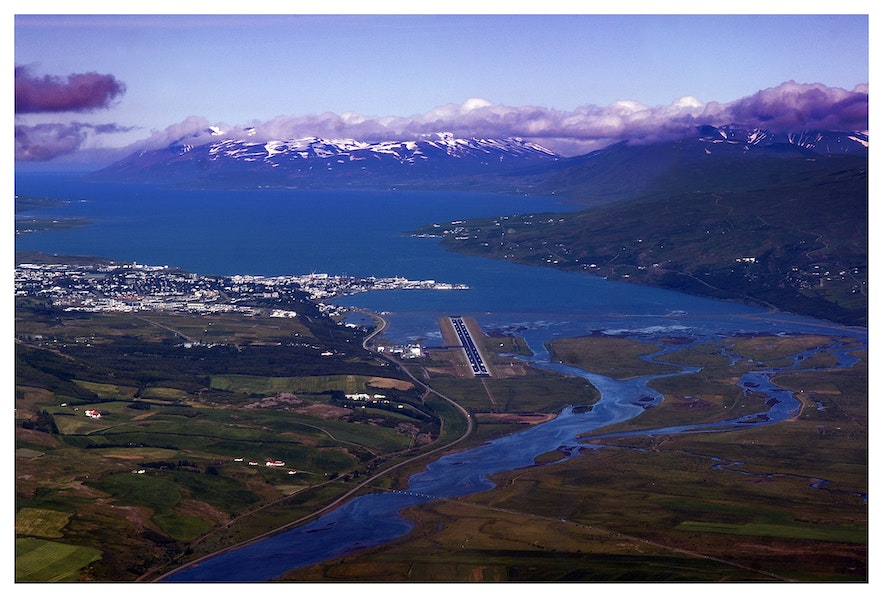 Photo from Wikimedia, Creative Commons, by Mylan Nykodym. No edits made.

The North Iceland airport provides daily service flights in several locations in Iceland, while it has occasional scheduled and chartered flights for international destinations.

The airport's most popular departure and arrival services are those from and to Reykjavik Airport. Daily, travelers may book Akureyri and Reykjavik flights through Icelandair.

As the port expanded over the years, more local destinations have been added to the mix. Key Iceland destinations include Grimsey Island in the north and Thorshofn and Vopnafjordur in the east. Norlandair is the company mainly offering these services.

With the thriving tourism industry in the northern region of Iceland, there are now more international flights in Akureyri. Iceland’s new startup air service provider, Niceair, offers flights between Akureyri and European cities like London, Tenerife, and Copenhagen.

The airport also accommodates chartered flights in specific local and international places. In particular, travel tour companies usually set this up in areas like Icelandic Highlands and Greenland.

With these daily, scheduled, and chartered flights, traveling to the best attractions in North Iceland has never been this excellent.

Over the last decade, the airport has undergone multiple major and minor renovations to improve its services and serve more tourists. In addition, there’s an ongoing expansion here with the addition of a new terminal building, expected to open summer of 2023.

It is the third largest airport in Iceland, after Keflavik International Airport and Reykjavik Airport. Most inbound and outbound flights serviced by Akureyri International are linked to these ports.

Travelers departing and arriving in the area would find its facilities and amenities sufficient and convenient. There is a duty-free shopping center on the terminal where international tourists can buy souvenirs and different products from. Likewise, you can also buy delicious food, drinks, and snacks from the airport’s bistro.

If you’re planning to visit the city of Akureyri or its neighboring villages, car rentals, taxis, and public buses are available from the airport.

Nearby Attractions in Akureyri International Airport

North Iceland, where Akureyri International Airport is located, is one of the go-to destinations in the land of fire and ice. The region is famous for its historic fjords, majestic waterfalls, and rich flora and fauna that tourists can visit during any season.

The closest area you can visit from the airport is the town of Akureyri itself. Apart from the great amenities and establishments in the town center, there are a lot of tourist destinations and Akureyri tours you can explore.

If culture and history are your priorities, there are several fascinating museums and permanent exhibitions in the town. Among these are Akureyri Museum, Akureyri Art Museum, and the Icelandic Aviation Museum. The aviation museum is housed in Akureyri Airport’s hangar.

For those seeking a more thrilling experience, horseback riding and whale watching tours are popular activities in Akureyri. The picturesque Eyjafjordur fjord is just at the edge of the town, where Icelandic marine animals are thriving. Humpback whales and white-beaked dolphins are familiar sights in the fjord, particularly during summer.

North Iceland is home to two iconic and powerful waterfalls, which you can visit easily from Akureyri.

Godafoss waterfall, 22 miles (35 kilometers ) from the airport, is part of the ring road and Diamond Circle route attractions. It is often called the “Waterfall of the Gods” because of its colorful history and breathtaking appearance. The Skjalfandafljot river feeds its waters, cascading from a drop of 12 meters (39 feet).

Dettifoss waterfall is a little farther from the airport compared to Godafoss waterfall. However, the 94 miles (152 kilometers) travel route is nothing compared to the magnificence that awaits you. Considered the most powerful waterfall in Europe, the waterfall’s width is enormous at 330 feet (100 meters).

Dettifoss is framed by two similar waterfalls, Selfoss and Hafragilsfoss. 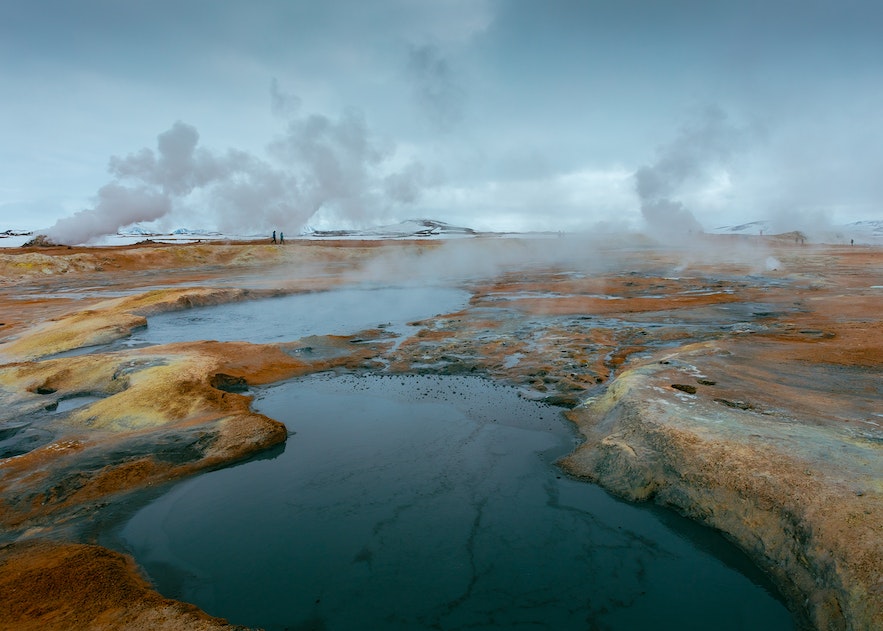 To make the most of your stay in the region, consider visiting the famous Myvatn lake, 49 miles (79 kilometers) from Akureyri. The beautiful lake is a testament to Icelandic nature and wildlife diversity.

The lake is characterized by the small islands scattered in its large body of water because it sits on an active geothermal area. As a result, geothermal bathing is a go-to activity here.

Birdlife is also flourishing in Lake Myvatn because of its surrounding vegetation and fertile waters. It is home to over thirteen nesting ducks, including harlequin ducks.

If you find yourself in the area by joining Myvatn tours, take some photos, as the site is overwhelmingly breathtaking.

Not far from the town of Akureyri is a small town on the north coast of Iceland called Husavik. Husavik is extremely popular with animal lovers and adventure-seekers because of the gentle giants roaming in its vast bay.

Skjalfandi bay, just off the town's coast, is a hotspot for marine life, particularly humpback whales. For this reason, whale watching in Husavik is one of the most in-demand activities in the land of fire and ice. The town has even earned the nickname "the whale-watching capital of Europe."

With all these attractions in North Iceland, Akureyri International Airport plays an essential role in making the tourism industry in the region prosper.