The water passages that you'll cross will truly spark your adrenaline and the riding on the gravel trails surrounded with nothing but the desolate highlands is a true experience to have. You will be deeply touched by the magic of Iceland's nature on this epic 4-day motorcycle journey.

We'll ride together with our awesome guides who'll make sure that you feel safe and secure during the whole journey. The motorcycle that you'll drive is perfectly equipped for this expedition as you'll soon find out as the KTM 690 R and Husqvarna 701 are our selection bikes and they truly are awesome all the way.

Don't hesitate and get your selves ready to enjoy this opportunity of a lifetime. This epic journey is the memory that can not be forgotten. Make sure you bring a camera or even better a personal diary as it will be a great tool for you to reminisce the depth of the majestic emotions that you experienced on this motorcycle journey of a lifetime.

Pick up at any hotel in Reykjavík and drive back the morning after the last riding day
3 nights in a&nbsp;mountain huts with&nbsp;sleepingbag accommodation and mattresses.
3 breakfasts
4 lunches and dinners and all food while we are driving
Snacks, coffee and water for 4 days
Motorcycle (Husky 701) for 4 days
Backup motorcycle when needed (can be different type from Husky701)
Motorcycle insurance
Fuel for motorcycle
Support vehicle with a driver and full support 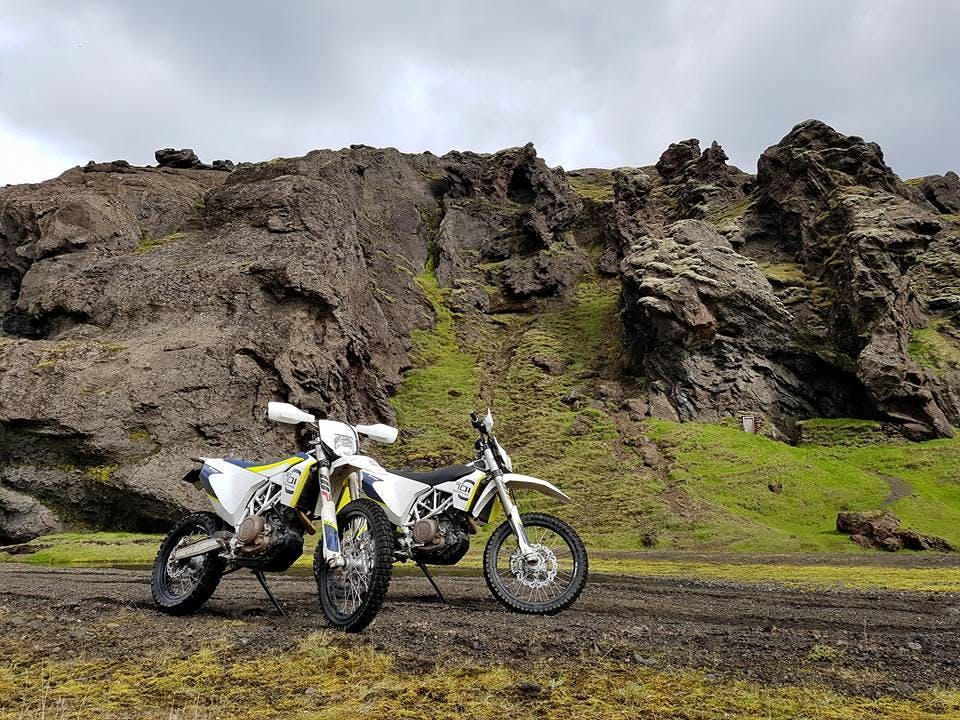 Get ready to ride into the deep highlands of Iceland witnessing incredible displays of raw nature. This is the best land to ride according to professional endurance explorers. Now, prepare your self for this awesome ride which truly you'll never forget. We start our ride from Selfoss where we ride from to the most famous Icelandic waterfall Gullfoss.

We'll head on out a special route giving us a moment to witness the incredible power of Nesjavellir Geothermal Power Plant as we ride through an incredible terrain making our way to Þingvellir National Park, where the oldest parliament of earth was established or 930AD. From there we'll ride to the incredibly hot water erupting springs Geysir and Strokkur.

Gullfoss waterfall is deeply rooted in the hearts of Icelanders and awaits you next, as you'll find out when your guide tells you the juicy details. Refreshed and ready to ride we head on to Hekla Volcano, a mountain of more stories than books can hold. A truly epic mountain to explore. On our way to the majestic volcano, we'll check out a beautiful and massive hydroelectric power plant named Sultartangi. This is a fully packed day with incredible sights. 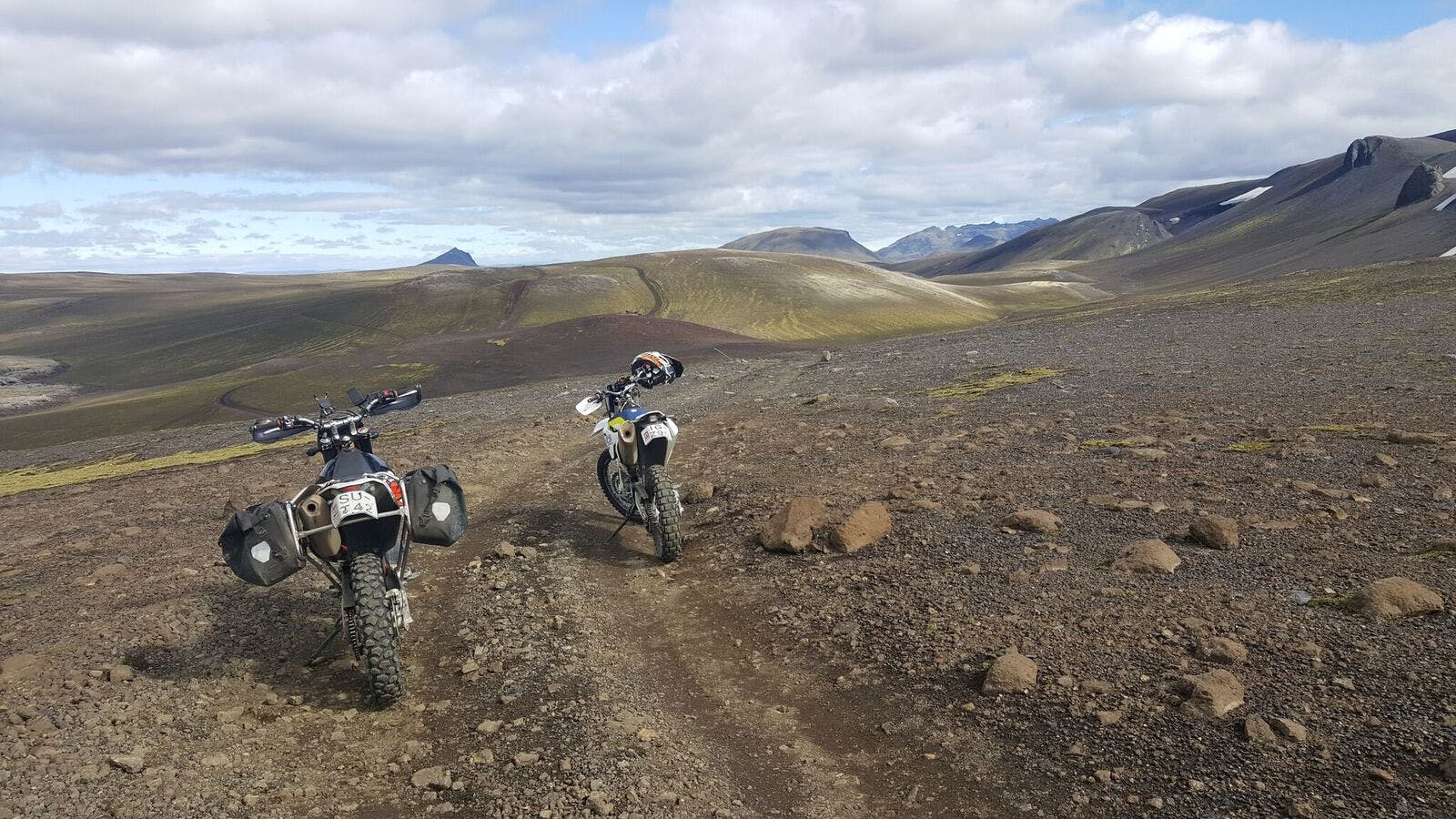 The Fjallabak region translates to 'Behind The Mountains' and takes its name from a collection of rugged mountains which hold as much lore as they do beauty. The trails in this region are completely awesome for us to ride, you'll understand why. An experienced rider was asked how the sensation was and he said that this was the best country to ride of over 20 countries that he has explored on an endurance motorcycle, Iceland is just completely like National Geographic combined with Lord of The Rings, it just tops everything.

We'll ride to a very famous spot called Landmannalaugar or the Pools of The People as it would translate. These pools are comfortable as they are the perfect mix of hot and cold water coming together. There are many juicy and very scary stories linked to this place as it comes very dark in the night. Please ask your guides to share with you a scary story or two before you depart Landmannalaugar.

When we are full of energy and newfound wisdom from Landmannalaugar we'll head out to Tungnaá River which we'll ride along with which is a really fun track to ride. We'll ride up Tungnaá up to a place of so much visual beauty that words will never grasp how beautiful it is.

You will be mind blown when you see the Vatnajökull glacier, the largest glacier in all of Europe. We'll come into contact with the glacier using special routes that allow us to see the coldest ocean you can think of called Langisjór. This lake which has a striking Langisjór that translates to Long Ocean was not discovered until recently as it is roughly accessible and totally magical.

After taking in this terrific and majestic scenery that will certainly leave you with incredible memories we'll head back down from this high and mighty location down to Skaftá River which we'll follow to a 60km long volcanic canyon. This canyon named Eldgjá which translates to Firecanyon literally was formed in the year 934 as one of the largest volcanic eruptions in Iceland took place.

The beautiful farm, Skaftárdalur, is where you'll ride out from heading east towards Laki, an incredibly stunning array of craters that were formed in one of the world's largest eruptions recorded. Riding in this terrain is completely awesome, the experience is phenomenal. We'll ride the vast lava to a small town with an amazing history and breathtaking scenery.

The town Kirkjubæjarklaustur was miraculously saved as the townsfolk had gathered together into the towns church praying for a huge bed of lava flowing forth. This lava was headed straight at the town and stopped literally at the doorsteps of the church. The total area of this incredibly huge lava field was 565 square kilometers and it offers spectacular scenery as you'll witness as you ride it on the perfectly equipped motorcycles.

Fjaðrárgljúfur is a magnificent canyon carved over a long time by the fresh river running at its bottom. This scenery is worth to see and is very magical. We'll have a great time riding these incredibly stunning landscaped creating awesome memories for us to keep. 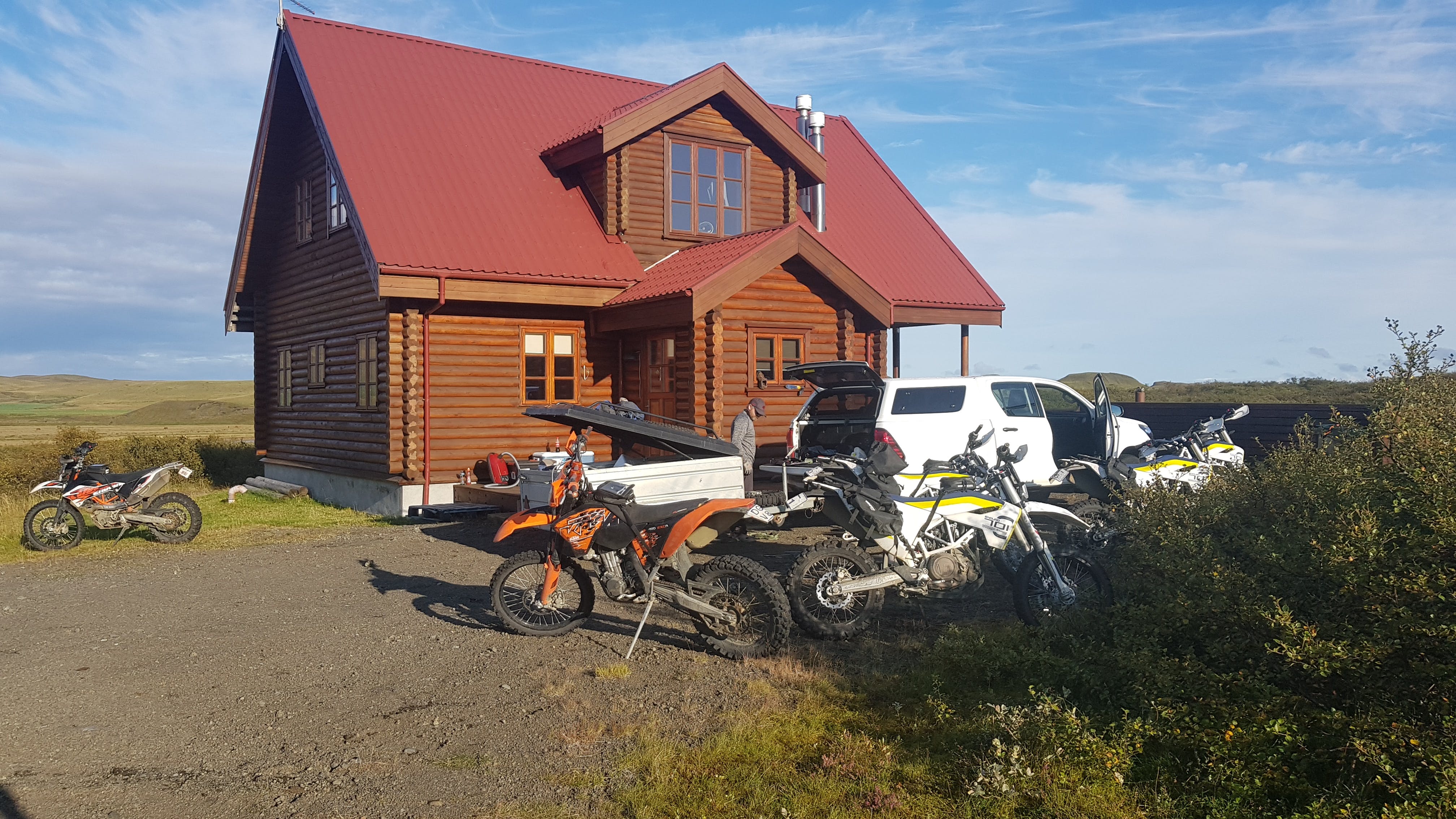 We ride out from Kirkjubæjarklaustur towards a spectacular village named Vík. The village is situated in a stunning location with black beaches as far the eye can see. We'll ride this awesome landscape to see incredible sights you'll never forget. You'll ride to visit the Reynisdrangar who are as scary as the name implies. These rocks are huge basalt pillars rising high in the sea surrounded by a very dangerous coastline that no one ought to set the foot near.

You'll be guided by our professional guides with how to engage the Icelandic environment with full safety measures. The black beaches surrounding Reynisdrangar have a long history of literally breaking peoples legs and worse. So, be excited but careful at all times, to follow the guides instructions.

Skógarfoss is a waterfall you'll want to photograph as it is certainly a waterfall of the hall of fame. The area surrounding the waterfall has been recognized to be a host to many creatures others than humans and many stories exist that you may want the guides to tell you more of. Some stories go as far to claim that trolls were changed to stone by the sunlight. Don't hesitate to ask your guides for all kinds of information, they love to be the best host they can.

We conclude the beautiful day with a visit to Seljavallalaug, an amazing outdoors completely in the wild geothermally heated pool that you can refresh your body and spirit in. Once we have reinvigorated our spirits by the hot natural water then we'll ride back to original starting point Selfoss to conclude our tour.

If you are unsure about if your gear is sufficient, don’t hesitate to contact us. Please note that all participants must have a licence to drive a motorcycle.