Enjoy the most incredible landscapes and features of West and South Iceland over five unforgettable days by booking this thrilling winter adventure, including glacier hiking and ice caving! Anyone eager to witness incredible sites, set out on exciting adventures, and marvel over the northern lights should not overlook this opportunity.

You will be led by a friendly guide and local expert, who will tell you all about the country’s nature and culture and keep you safe throughout. They will drive you in a minibus—which boasts free WiFi—guaranteeing you a small group. You’ll end your days at lovely countryside hotels for three nights, and for one, you’ll stay in Reykjavik.

These hotels come with private bathrooms and complimentary breakfast.

On your first two days, you’ll travel around the sites of West Iceland, marveling over the highest flowing hot springs in Europe, the Snaefellsnes Peninsula, the ‘mountain shaped like an arrowhead’ from Game of Thrones, and many more attractions. You’ll have the chance to bathe in a luxurious geothermal spa and explore a lava cave.

Over your third day, you’ll head from the west to the south via the world-famous Golden Circle sightseeing route and waterfalls of the South Coast.

On days four and five, you’ll experience some of Iceland’s most incredible and sought-after attractions and experiences. You’ll witness the icebergs of the Jokulsarlon Glacier Lagoon and Diamond Beach, explore the magical crystal blue ice caves, and trek up the slopes of an ice cap on a glacier hiking tour in the Skaftafell Nature Reserve.

Every night, your guide will keep an eye on the sky and their weather apps to help you seek out the aurora borealis, Iceland’s most beloved winter phenomenon. You’ll have an excellent chance at multiple viewings.

Embark on a fantastic five-day adventure around Iceland with glacier hiking and ice caving by grabbing your spot on this tour while availability lasts. Check availability by choosing a date. 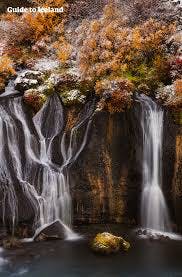 On the first day of your five-day winter adventure around Iceland, your friendly guide will pick you up in a modern minibus and escort you into the landscapes of west Iceland. On your way to your first sightseeing stop, you’ll witness a diverse wilderness of fjords, countryside, and striking mountains.

Deildartunghver is the highest flowing hot spring in Europe, releasing 380 pints (180 liters) every second. It is an awe-inspiring example of Iceland’s volcanic power. Adjacent to the spring and utilizing its boiling waters is the luxurious Krauma Spa, which you can organize admission into while booking.

While this is a fantastic way to relax and prepare for your adventures ahead, your guide will take you to a nearby farm to meet some Icelandic horses if you would rather save money and not enter.

After your activity, you’ll head to Reykholt, a lovely village with an impressive history. This was the birthplace and home of Snorri Sturluson, a medieval writer who recorded most of what we know about the Old Norse Gods, such as Odin, Thor, and Loki. As a chieftain, he was also instrumental in the country’s civil war.

You’ll then head to Hraunfossar and Barnafoss, two adjacent but contrasting waterfalls. Hraunfossar is broad, gentle, and serene, pouring in many channels off a plateau of lava. Barnafoss rushes down a narrow, gray valley and is haunted by the tragic story of lost lives within its waters.

You will then head to your welcoming hotel in the Borgarnes area. If the sky is clear, you will go on a Northern Lights hunting adventure en route, hopefully providing you with an unforgettable first viewing. 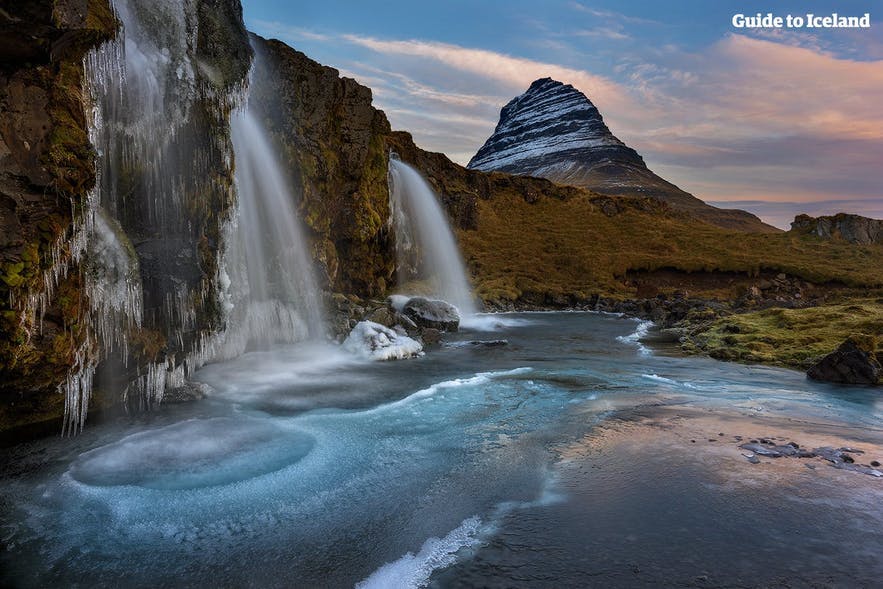 After breakfast on day two of your winter trip around Iceland, you will tour the spectacular Snaefellsnes Peninsula. Named ‘Iceland in Miniature,’ there is a considerable amount to see here, and you will pack every moment of daylight with dramatic sites.

Arnarstapi, for example, is a beautiful fishing village with a stunning shoreline. You’ll get to marvel over rock arches such as Gatklettur and an abundance of seabirds. Djupalonssandur is another fantastic stretch of coastline, renowned for its black sands and historic lifting stones. Fishers used these rocks to see if they were strong enough to work on the dangerous seas.

You’ll also see Kirkjufell, a spectacular peak towering away from the central mountain range that runs down the peninsula. Game of Thrones fans will recognize it as ‘the Mountain Shaped Like an Arrowhead’ from later seasons.

The most dramatic feature of Snaefellsnes, so beautiful it has a national park surrounding and named after it, is the Snaefellsjokull subglacial volcano. With two peaks, a crown of ice throughout the year, and a beautiful ambiance, it is no wonder that it has inspired countless artworks such as JulesVerne’ss’’A Journey to the Center of the Eart”.

If you want to experience this story for real, you can embark on a lava caving tour under the volcanic landscapes here. Vatnshellir is a spectacular underground network with mesmerizing ice sculptures and surprisingly vivid colors.

With your adventures complete for the day, your guide will seek out a dark spot to hunt for the Northern Lights if conditions allow. You’ll then return to Reykjavik, where a welcoming hotel is waiting for you. 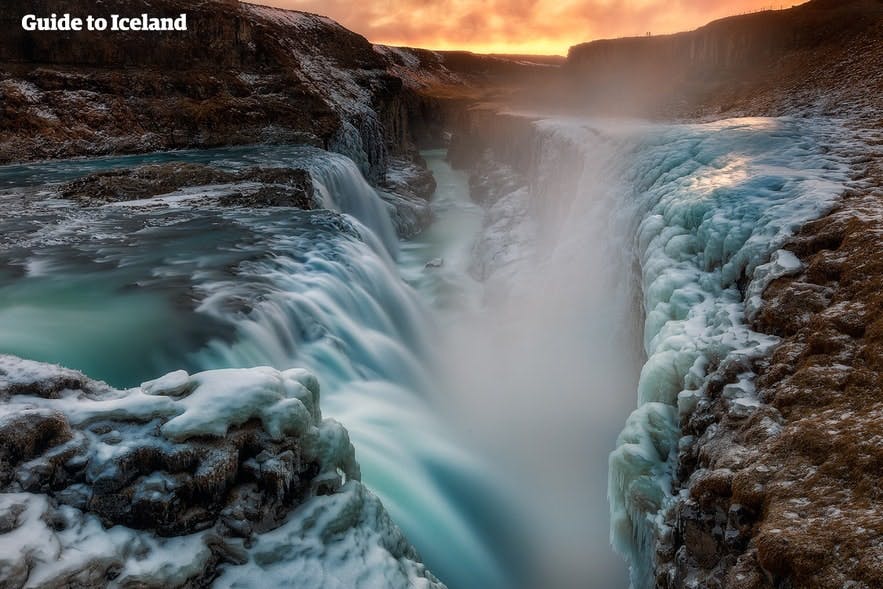 On day three of your incredible five-day winter adventure in Iceland, you will see the major sites of two magnificent sightseeing routes, the Golden Circle and the South Coast.

The first attraction of the Golden Circle is Thingvellir National Park. This UNESCO World Heritage site is located directly between the tectonic plates and one of the few places where you can walk between the continents. The landscapes here, with waterways flowing to a vast lake and an abundance of birch trees, are beautiful, and it boasts a fascinating history that dates back over a millennium.

Secondly, you’ll visit the Geysir Geothermal Area. As can be guessed, this site is home to several geysers, the most active and dramatic of which is Strokkur. This fantastic feature goes off every five to ten minutes and can reach incredible heights of over 60 feet (18 meters).

Next is Gullfoss Waterfall. The namesake of the Golden Circle, translating to the Golden Falls, Gullfoss is a breathtaking feature. With enormous power, it cascades in two tiers, the first of which is 36 feet (11 meters) and the second of which is 69 feet (21 meters).

With these three sites enjoyed and photographed, you’ll head to Seljalandsfoss, the first major attraction of the spectacular South Coast. Another waterfall much taller than Gullfoss, standing at 197 feet (60 meters), though much gentler. A unique aspect of this feature is that it falls before a cavern, allowing you to enjoy it from some magnificent angles.

Skogafoss is the third impressive falls you will marvel over today. Combining the power of Gullfoss and the height of Seljalandsfoss, it is the favorite of many travelers to Iceland.

Your final site today will be the beach of Reynisfjara. This spectacular stretch is renowned for its volcanic black sands, enormous waves, hexagonal basalt columns, and offshore sea stacks of Reynisdrangar. Reynisdrangar is said in folklore to be a pair of trolls who were petrified by the sun when they hijacked a passing ship.

En route to your accommodation around Kirkjubaejarklaustur, keep an eye on the skies for the aurora borealis. 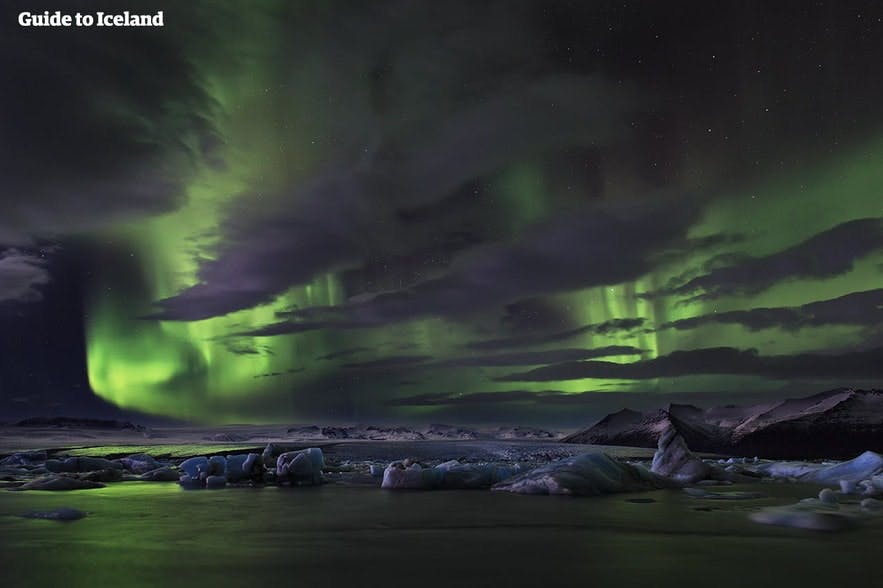 On the fourth day of your five-day winter trip around Iceland, you’ll partake in two of the country’s most unforgettable experiences. You’ll start by exploring a crystal blue ice cave and then marvel over the icebergs of Jokulsarlon and the Diamond Beach.

The ice caves you’ll be visiting today are those under the largest glacier in Europe, Vatnajokull. These features only open a few months of the year due to the specific conditions required to be accessible, making the experience even more special. Furthermore, they are much more vividly blue than most other ice caves in the country.

As you enter, you’ll be blown away by the coloration, the alien textures and sculptures, and how light refracts through the walls and ceiling. Your guide will lead you through the chambers and corridors and allow you to take plenty of photographs.

After a life-changing exploration, you’ll be taken to Jokulsarlon. This lagoon is cluttered with countless icebergs whose colors and sizes defy the imagination. You’ll watch and listen as they rotate and break apart with breathtaking beauty. You may also see seals hauling out on their gleaming platforms.

Adjacent to the Jokulsarlon Glacier Lagoon, your guide will show you the Diamond Beach. When they finally escape the lake, the icebergs wash up here and glisten like jewels against the black sands.

With these sites explored, you will head to your accommodation for the night, stopping if you catch the Northern Lights en route. 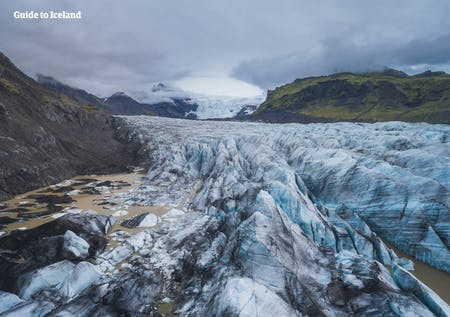 After breakfast on the morning of your fifth day of this tour, you will journey back to Reykjavik. En route, however, you will stop at one of the most breathtaking corners of the world, the Skaftafell Nature Reserve.

Skaftafell has everything that makes Iceland so beautiful. Lava fields, birch forests, glacier tongues, mountains, waterfalls, and rivers are abundant. The site is so stunning that it was once a national park in its own right, though it has since been included in the larger Vatnajokull National Park.

It is often called a hiker’s paradise due to the beauty of its trails.

After an exploration, your guide will take you to one of the glacier tongues that lead into the nature reserve for a glacier hiking experience. They’ll give you your helmet, crampons, and ice ax before leading you up the gleaming slopes. As you ascend, you’ll marvel over ice walls, crevasses, strange formations, and dramatic ridges.

Furthermore, you’ll enjoy some of the most stunning views of the south imaginable.

Finally, you’ll return to the minibus to drive back to Reykjavik. As you travel from east to west, you can hope for one more incredible viewing of the Northern Lights for the cherry on top of this fantastic excursion.