Explore the entire Ring Road of Iceland in less than a week with this fast-paced, action-packed 6-day vacation package. This 6-day adventure is designed for those who don’t want to waste a moment of their short getaway to one of the world’s most beautiful countries.

The first and last days of your holiday will be spent in the cultural capital of Reykjavik; in between, you’ll be on a thrilling tour traveling counter-clockwise around the island. This trip will introduce you to the incredible array of attractions along the South Coast; the dramatic, untouched fjords of the East; the diversity of the North; and the picturesque landscapes of the West.

Not only will you be able to marvel over the most famed Icelandic sites, such as the Lake Myvatn region and the Skaftafell Nature Reserve, but you’ll also be able to witness hidden gems such as Gljufrabui Waterfall. Furthermore, it is possible to cram your days with even more excitement by booking a range of unique activities.

Summer travelers, for example, will be able to take a whale watching tour and take an unforgettable boat trip on the Jokulsarlon Glacier Lagoon. Winter travelers, meanwhile, have the once-in-a-lifetime chance to explore a crystal blue ice cave in Vatnajokull National Park.

The former will also be able to sightsee under the unending light of the midnight sun. In contrast, the latter has a chance to marvel over the legendary aurora borealis whenever the sky falls dark. These phenomena will make the many hours spent on the road traveling from incredible site to incredible site seem to fly by.

Though this holiday is an action-packed whirlwind of adventure, you can embark on it without any worries or stresses due to the convenience of vacation packages. All your hotels with breakfast are sorted before your arrival, as are the tours you select while booking.

Furthermore, your local guide will handle all the driving, taking the hassle out of planning your routes and navigating Iceland’s often treacherous roads. This guide promises to be an expert on the country’s nature, folklore, and history, providing fascinating context to each site you visit. 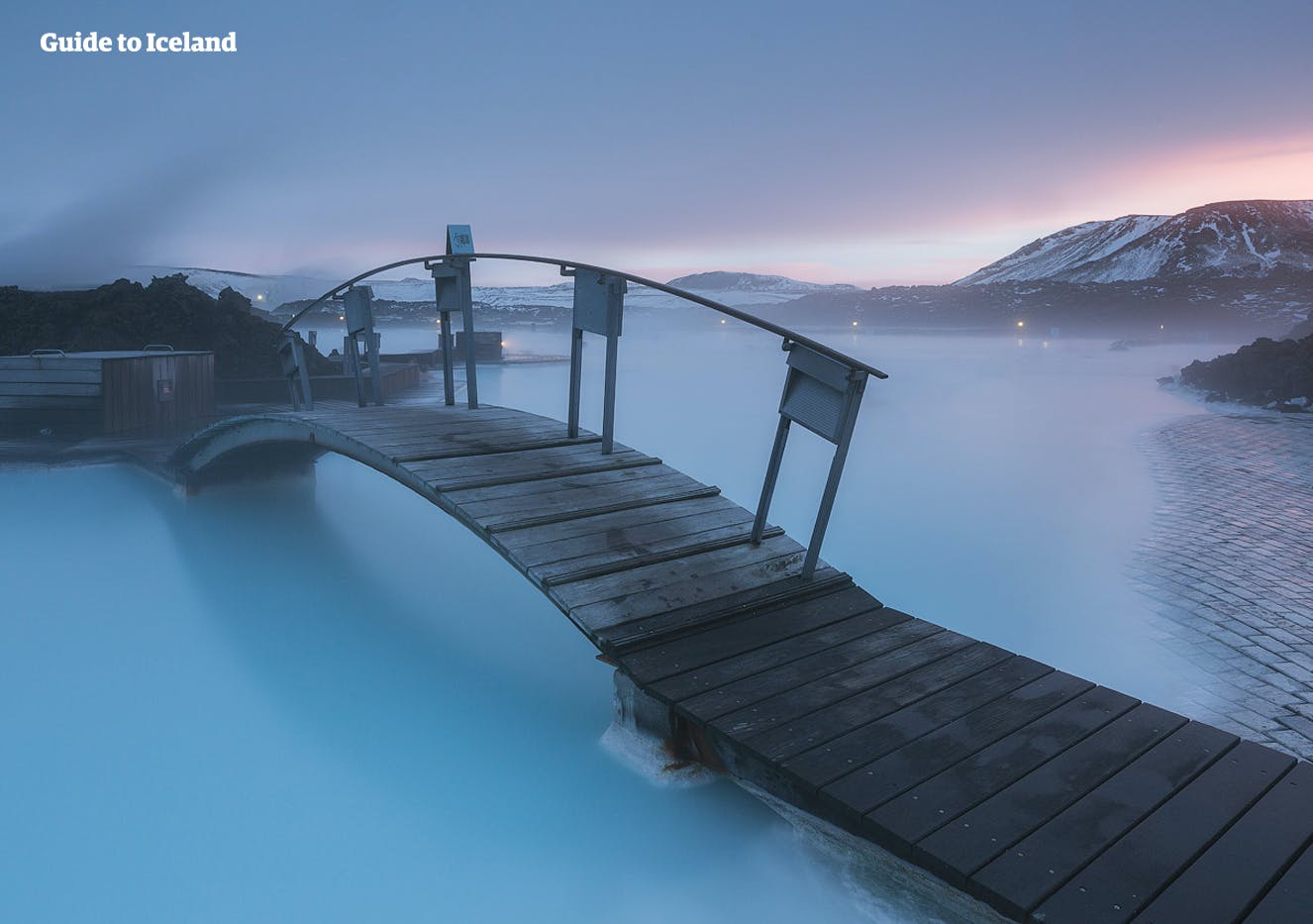 On the first day of your action-packed holiday in Iceland, you’ll land at Keflavik International Airport. After sailing through customs, you’ll find a convenient shuttle bus waiting for you. However, rather than take you straight to Reykjavik, you’ll make a delightful detour to the Blue Lagoon geothermal spa. If there is no time to visit the lagoon today, it can be added to another day. Your travel consultant will be able to arrange this for you.

One of the most famous attractions in the country, the Blue Lagoon is a haven of relaxation and wellbeing. It boasts azure waters that are pregnant with healing properties, saunas, steam rooms, and a range of therapies and treatments to help the mind, body, and soul.

After rejuvenating in this heavenly place, you’ll take the shuttle bus to your hotel in Reykjavik. The city has a thriving cultural scene and some spectacular art and architecture, so be sure to explore if you are not too tired. Don’t get too carried away by the bustling nightlife, however, as your Icelandic Ring Road adventure starts early tomorrow. 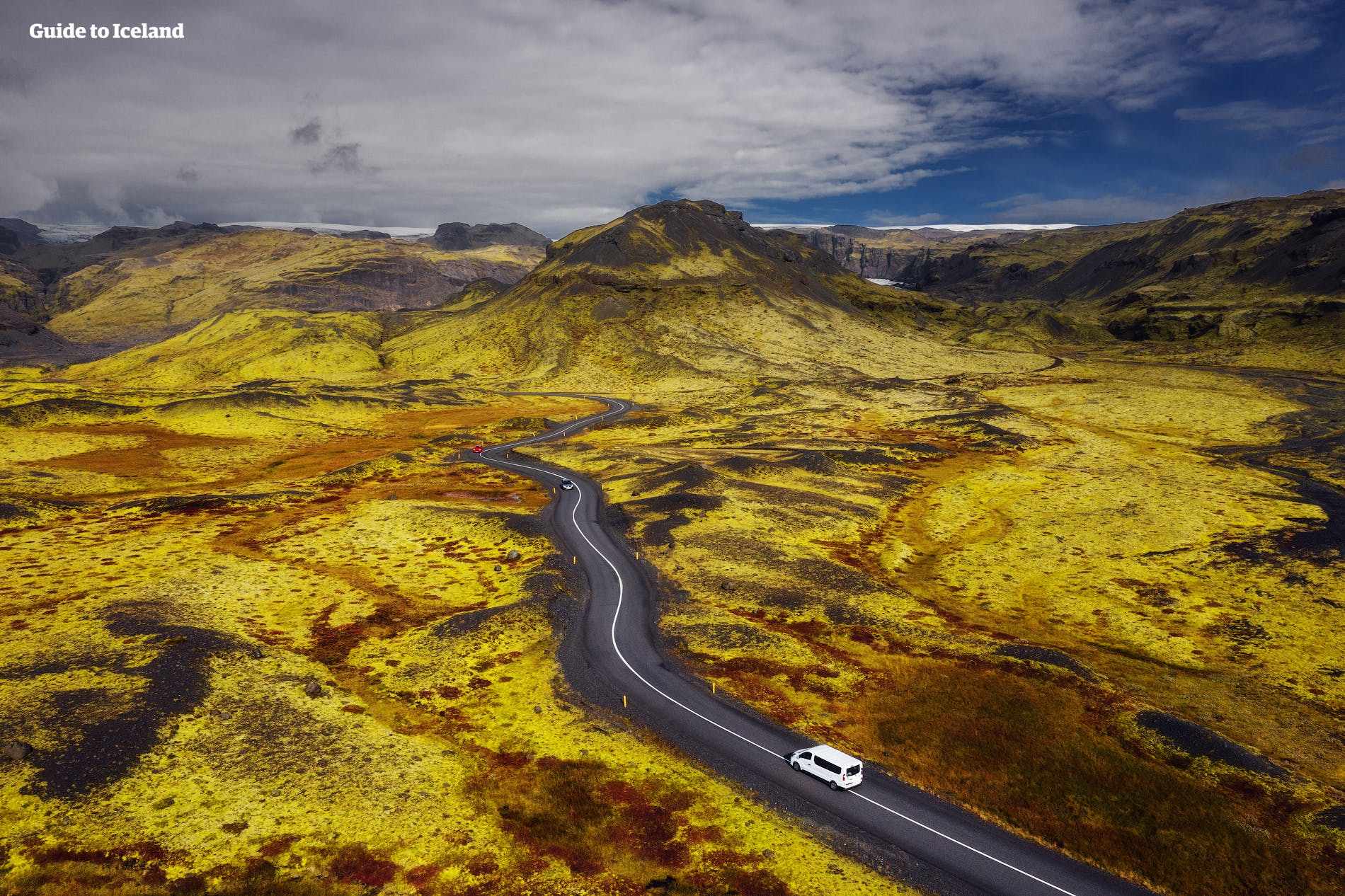 On day two of your holiday, your four-day navigation around the circumference of Iceland will begin. You’ll be picked up by your guide, meet your travel companions, and set out on the trip of a lifetime.

The sites you will enjoy today line the spectacular South Coast. You’ll begin by visiting the stunning waterfall of Seljalandsfoss, and if the path is clear, locate its hidden neighbor, Gljufrabui. The next site is another magnificent waterfall, the mighty Skogafoss.

After approaching it as closely as you dare and feeling its mist across your face, you’ll continue to the black sand beach of Reynisfjara. This stunning stretch is best known for its coastal geology; the sea stacks of Reynisdrangar tower over the waters, and the giant rock arch of Dyrholaey can be seen to the west.

After a quick stop for lunch in Vik, you’ll continue east; the landscapes around you will vary from black sand deserts to rural beauty until the mighty Vatnajokull glacier begins to dominate the scenery. As Europe’s largest glacier, it is also a National Park, part of which you will explore by visiting the Skaftafell Nature Reserve.

Beloved for its incredible scenery, you can enjoy a range of classic Icelandic features here, such as glacier lagoons, waterfalls, rivers, and lava fields. One of the reserve’s highlights is the magnificent outlet glacier of Svinafellsjokull, which you elect to take a tour on while booking.

Glacier hiking tours are a thrilling way to enjoy Iceland’s nature, not only providing you with an adventure across unique and beautiful terrain but exposing you to some of the most unforgettable views the country has to offer.

After an action-packed beginning to your Ring-Road adventure in Iceland, you’ll retire for the night in the area. 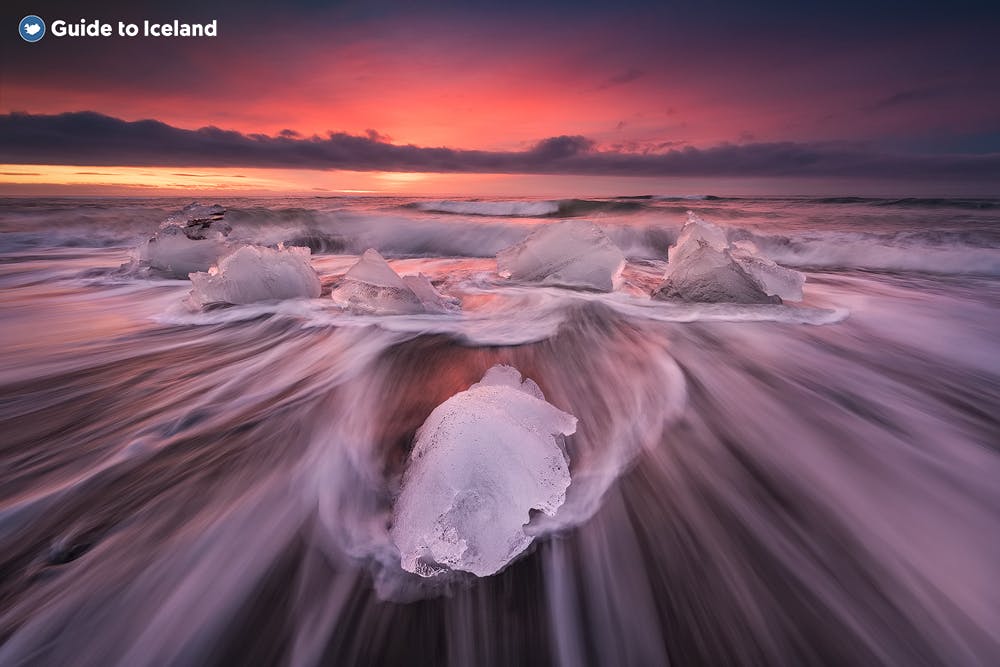 After breakfast on the third day of your fast-paced Icelandic holiday, you will head to one of the country’s most famous and beloved attractions. The Jokulsarlon Glacier Lagoon is a vast lake filled with giant, vividly blue icebergs that seems to be pulled from a fairytale. Walking along its shores is breathtaking, although summer visitors can book a zodiac tour for an unforgettable new perspective.

Before departing from Jokulsarlon, you’ll be able to fit in a quick visit to the Diamond Beach regardless of the tour. This stretch of black sand is littered with smaller icebergs that wash up after escaping the lagoon, and it got its name from how they glisten magically in the sun.

After this, you’ll set off to one of the least visited regions of Iceland, the East Fjords. This area only attracts fewer tourists due to its distance from Reykjavik, not because it lacks any beauty, and the smaller crowds at each site only make it more spectacular.

In fact, many visitors find the East to be their favorite part of Iceland due to the unspoiled views over sparkling fjords, towering mountains, minuscule villages, far-flung beaches, and Vatnajokull glacier. The area also has an abundance of wildlife on land and in its seas, boasting wild reindeer, seabirds, and marine mammals.

After a scenic journey in the winding fjords, you’ll retire in the capital of the region, the beautiful town of Egilsstadir. 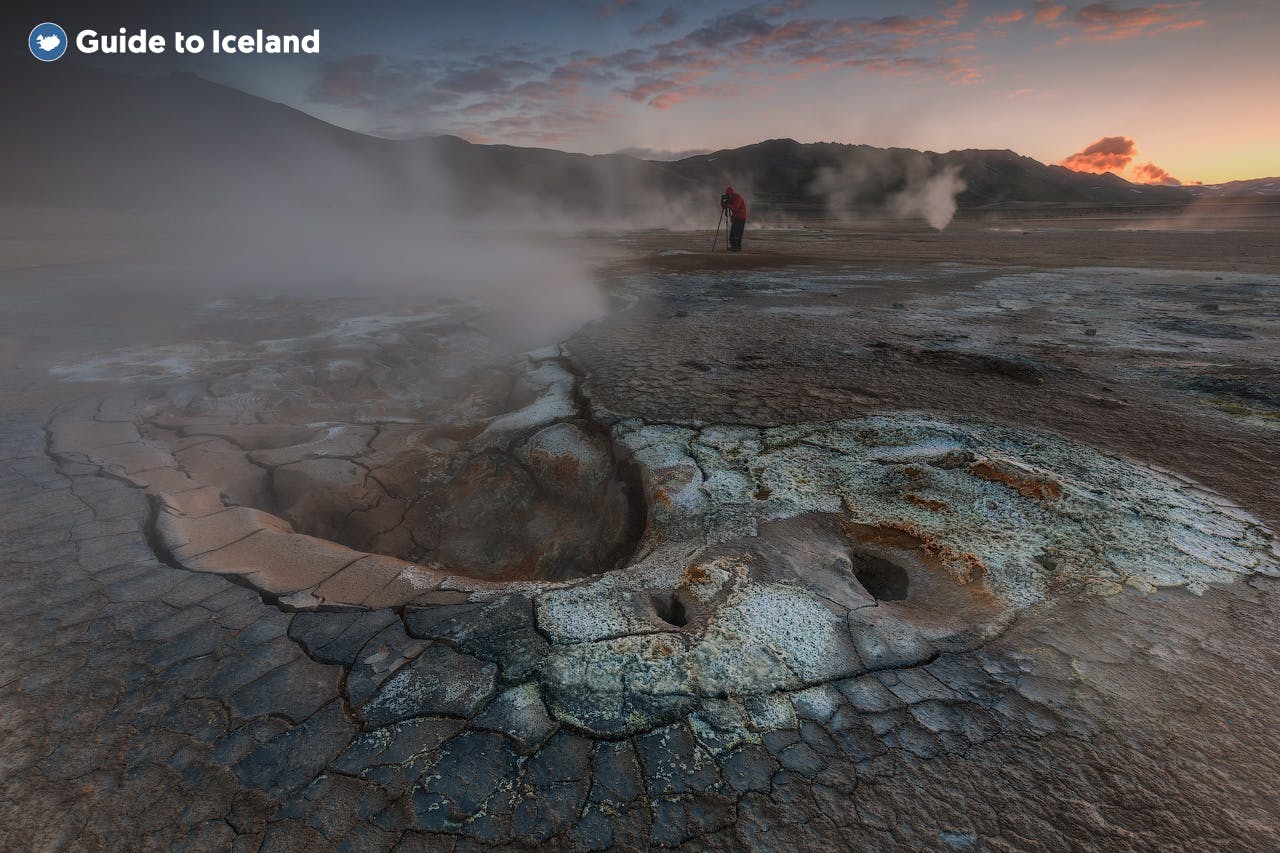 On day four of your holiday, you'll leave the East Fjords and head to north Iceland. Like in the south, the sites and landscapes here are abundant, spectacular, and unbelievably diverse.

You will, for example, be immersed in lava-covered terrain so stark that it appears to be from another planet; after driving a short distance, however, you'll be surrounded by the verdant greenery and azure lakes of Myvatn. There is thriving flora and fauna by these sparkling waters, but just a few miles away at Namaskard Pass, where hissing steam vents have poisoned the surroundings with their volcanic fumes, there is only barren lifelessness.

Dramatic craters from historically devastating eruptions contrast with the picturesque pseudocraters on Myvatn's shores, and bright, scenic picnic spots sit in the shadow of the ominous Dimmuborgir fortress.

Even the waterfalls boast great diversity. Godafoss is beautiful, surrounded by countryside, while Dettifoss, the most powerful falls in Europe, thunders into a stark, rocky canyon.

After a day of sightseeing around this stunning area, you can opt to recharge by visiting the Myvatn Nature Baths. This spa is luxurious, quieter than many other pools around the country, and immersed in a spectacular landscape.

At the end of the day, you'll reach the town of Akureyri, the country's second-most lively area, after the capital. After soaking up its culture and enjoying beautiful views of Eyjafjordur fjord, you'll retire for the night. 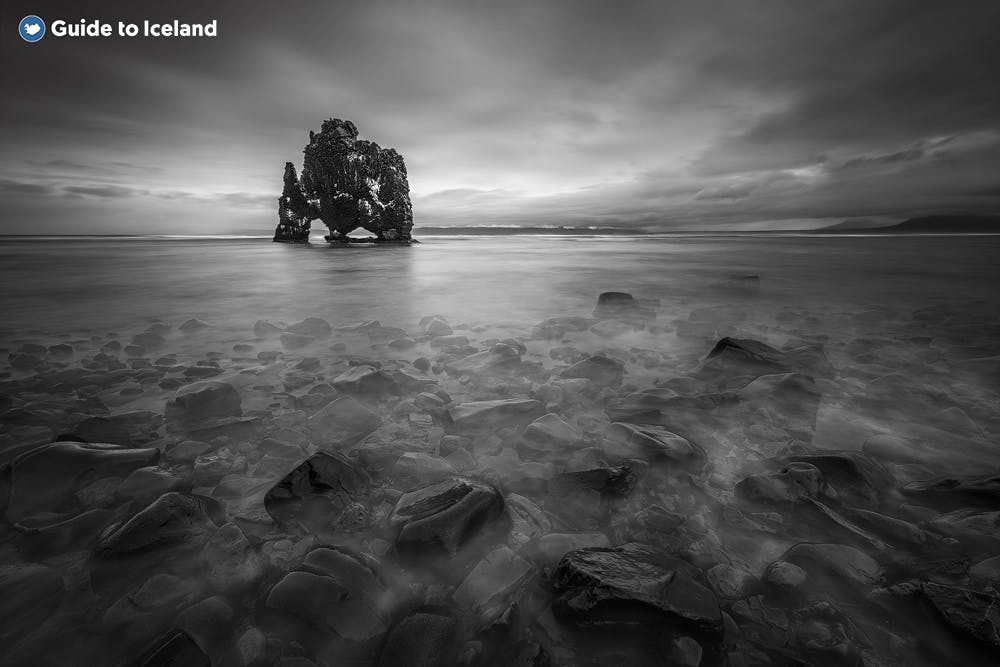 On the fifth day of your action-packed Icelandic vacation, you will see more sites of North Iceland before returning to Reykjavik through the beautiful landscapes of the west. Your first stop is at the village of Dalvik, a short drive from Akureyri. This settlement is often hailed as one of the best whale watching locations in the country.

If you elect to whale-watch while booking, you’ll set out into a spectacular fjord and have a near-certain chance to witness some of the world’s most beautiful creatures. In summer, Humpback Whales, White-Beaked Dolphins, and Atlantic Puffins all call these waters home, and even creatures such as Orcas, Belugas, and Blue Whales have been known to visit.

If traveling between April and October, you’ll follow this adventure up with a visit to the dramatic Kolugljufur canyon, home to a powerful waterfall. Otherwise, your second destination for the day is another North Iceland site renowned for its wildlife: the Vatnsnes Peninsula.

Many seal colonies can be found lounging on its shores and playing in its waters, and the peninsula’s largest town, Hvammstangi, is home to the Icelandic Seal Centre, where you can learn more about them.

Vatnsnes is also home to the famous rock monolith of Hvitserkur. Shaped like an elephant drinking from the shallow waters of a bay, Hvitserkur attracts many photographers for its unusual but striking formation.

After enjoying these sites, you’ll begin your journey south, back towards Reykjavik. West Iceland is home to many lovely landscapes to admire en route, with the idyllic countryside, fields of lava, countless mountain ranges and volcanoes, glacier views, and a dramatic coastline.

You’ll reach Iceland’s capital in the late evening, just in time to witness the nightlife before retiring. 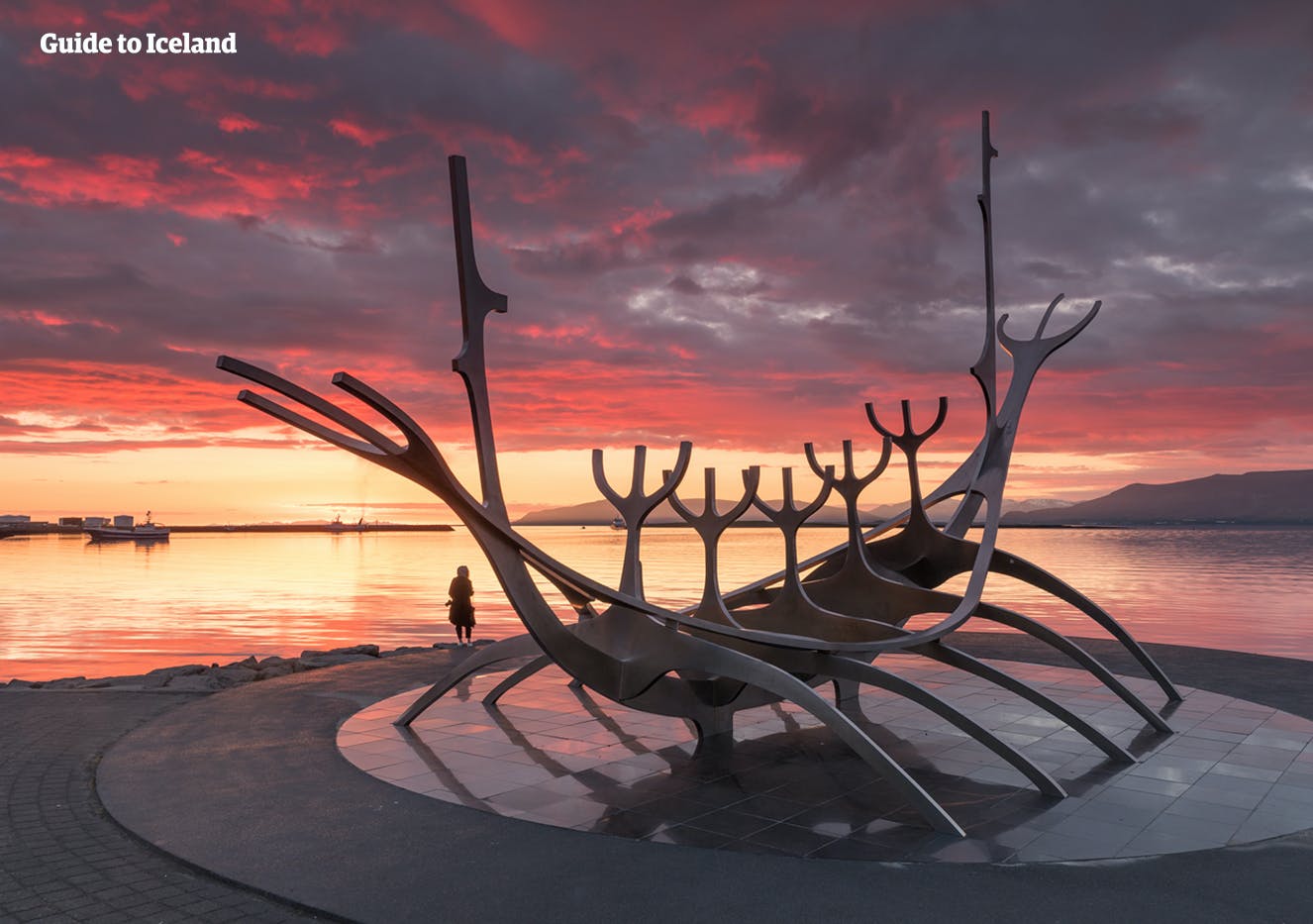 Your sixth day is your last day in Iceland. If you have a late flight, you can use the opportunity to explore Reykjavik and admire its art, architecture, parks, and countless cultural sites. You could even fit in a visit to a fascinating museum or gallery or take a dip in a local pool.

The city is also home to many great boutiques for some last-minute souvenir shopping. Having spent the past five days wandering through magnificent nature rather than city streets, this may be your only opportunity to do so.

Alternatively, you could spend the day in the Blue Lagoon if you did not have time to visit when you arrived. After all the action of your holiday, there is no better way to unwind and reminisce.

A shuttle bus will return you to the airport in time for your return trip, and you can enjoy your flight knowing you made the most of every second you had in Iceland.

Please be aware that your itinerary may have to be rearranged to better fit your arrival date and time. Please note that the boat tours on Jokulsarlon are only available from May to October.

If you are travelling in a group, but prefer a single room, please make separate bookings.

For multi-day guided tours, accommodation cannot be upgraded and the levels below do not apply.

Dormitory beds with shared bathrooms in guesthouses or hostels, such as HI Hostels. Located in the capital region. Breakfast is not included.

Private rooms with shared bathroom in guesthouses or hostels such as Capital Inn Guesthouse. Located in the capital region. Breakfast is not included.

Rooms with a private bathroom at three-star hotels such as Hótel Klettur, or quality guesthouses. Located in the city center or in close vicinity. Breakfast is included.

Rooms at four-star design hotels in the city center with a private bathroom at the absolute best locations downtown such as Hotel Alda. Breakfast is included.