Book your trip
Rent a car
Vacation packages
Explore Iceland
Book your trip now
Jump to chapter
Your own Superjeep experience in the Highlands:

Superjeep Self-Drive tour through the Highlands

The farther I felt my way through the river, the higher the water rose around us, till it almost reached the windows. "Please, don’t let it touch the engine, please don’t…" My heart skipped a beat. Carefully I pushed the gas pedal a bit stronger. Nothing happened. A bit more… and I felt the wheels spinning. But the car didn’t move. We were stuck… 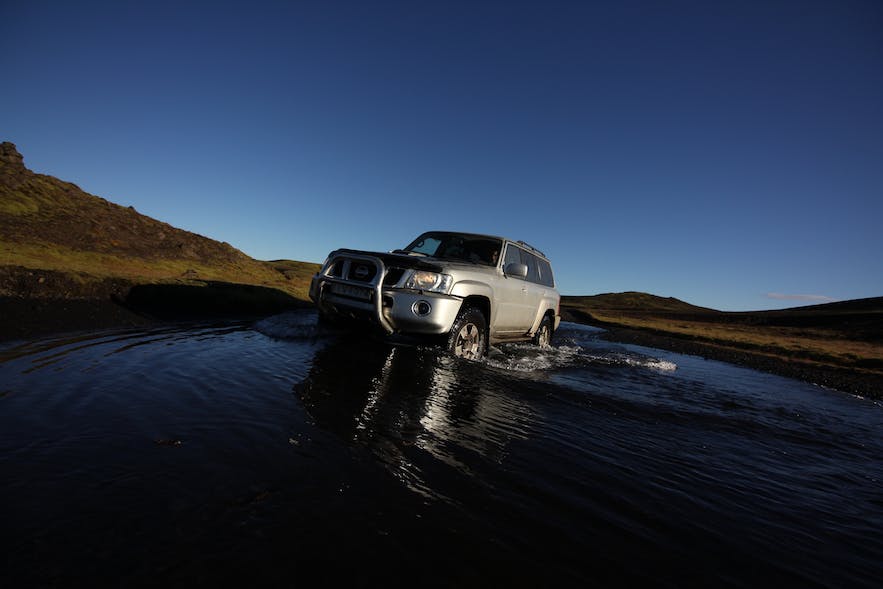 The Icelandic Highlands… Last week we had crossed them by foot, for this weekend we had borrowed a superjeep to go through this experience by car, too. Of course not exactly the same path we had hiked… But every now and then we reached a spot that seemed familiar - And we remembered how glad we would have been last week to have a car to cross the rivers. There was something that the owner had reminded us of several times to be careful about: All possible eventualities were covered by the different insurances, but for any damage caused by river crossing we would have to come up ourselves.

That beeing said, we would eventually be fine, we were told, if we just drove slowly and carefully enough into the river to not cause a wave that could potentially reach the engine bay. And he tought us, counterintutively, to watch out for the spot where the water is the wildest, because there it also is the shallowest. And finally to drive through the river in an angle with, not against the current…

Although we could feel our heartbeat driving crazy every time, it was incredibly fun to cross the first rivers! This adrenaline rush when the car’s nose lowered and broke through the water… Nils insisted to be the first to drive and he did a great job. Good enough for Jan to be able to navigate the drone above our heads from the backseat of the car.
And every time when either the drone or the car went too fast for the other we had to stop, change the camera setting and then roll on. Really, we weren’t that fast - But therefore we made some extraordinary shots of our superjeep on the highland roads. And a carporn. 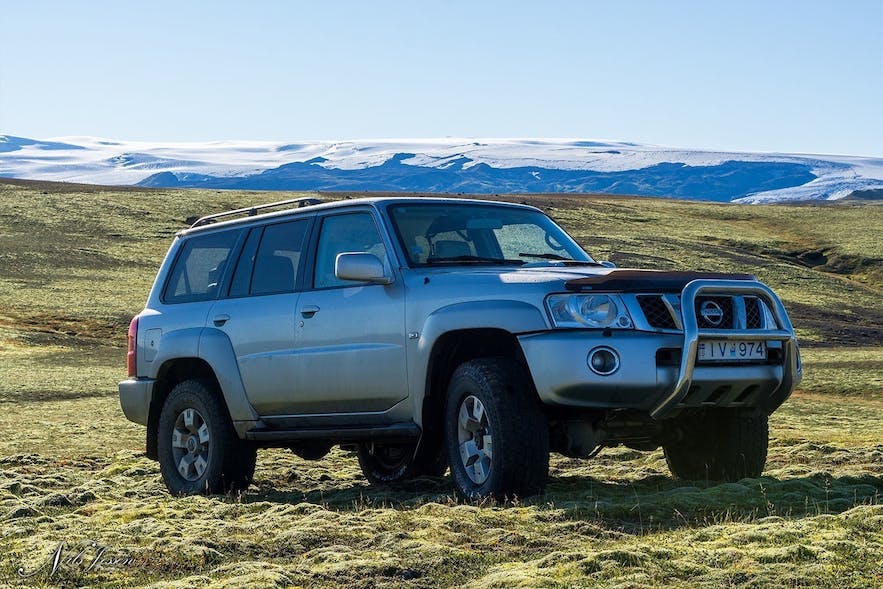 When we checked our position on the map in the late afternoon and saw that we hadn’t even worked our way through a third of the way yet we still all thought it to be funny. Yes, we had been warned that the rivers would grow on water and current over the day due to the molten glacier water… But up to this point the rivers hadn’t been more than tiny streams... So we didn’t worry too much about it. 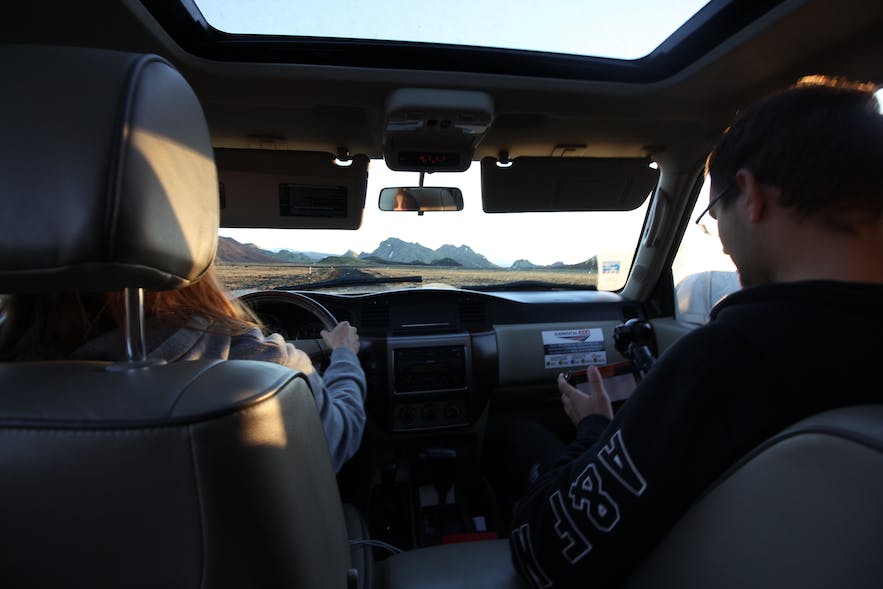 Finally, finally, finally it was my turn to drive! The sun was close to touch the horizon, so we decided to film our next river crossing - last oppurtunity!

The river seemed to carry more water than the ones before… Jan exited and arranged his camera equipment. The time had come. 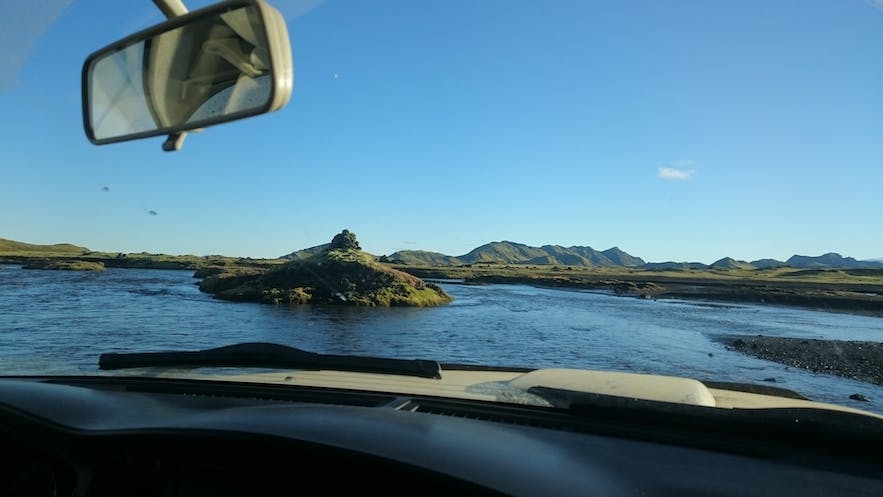 Take a deep breath, I reminded myself, and very careful now. The superjeep rolled down the small bank as slow as a dead snail - but still the water swashed more than intended. I swallowed. This one was deeper than expected. The farther I felt my way through the river, the higher the water rose around us, till it almost reached the windows. Just to underline the relation: The car was the biggest jeep that Nissan runs, was lifted 10 inches and had 35 inch wheels on it that were as tall as my bellybutton - a full grown monster truck.
Please, don’t let it touch the engine, please don’t… My heart skipped a beat. Carefully I pushed the gas pedal a bit stronger. Nothing happened. A bit more… and I felt the wheels spinning. But the car didn’t move. We were stuck…

My fingertips started to shake but I forced myself to take another deep breath. “Back a bit”, Nils conducted. The water swashed against the doors. “Now a bit to the right…” I disengaged the clutch and locked the differential. Then I engaged the first gear and slowly, really slowly… The engine reved like a hurt wolf and we could feel how the car fought and fought… There was a sudden jolt and I could drive on. We made it to the shore!

And then the glance back at Jan standing on the other side of the river, the shock had gripped him to the marrow as much as us. Nevertheless we had no other choice but to drive back, pick him up and then cross the river a third time. We really chose the right spot for filming…! 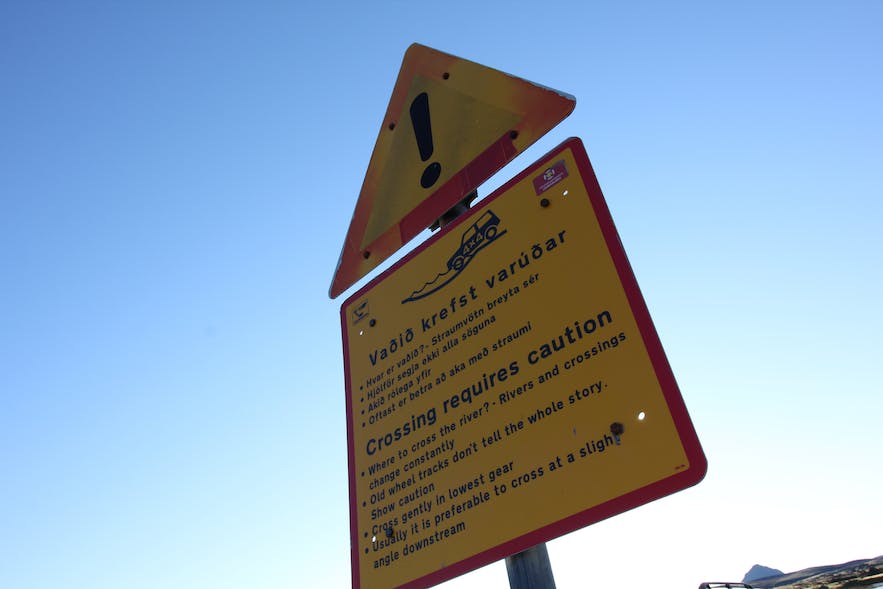 When we reached the Thorsmörk valley we had already left the worst part behind. (We managed to get grandiosely lost anyway…). Here, the guys decided to camp for the next few hours to wait for a hopefully clear sky and, if the gods were good, even Northern Lights.

I will just skip the next 7 hours, as you can read all about this amazingly breath-taking evening in another post: On the Hunt for Northern Lights. (Or you can just watch the video about it: Northern Lights - Video)

It was already quarter to three in the morning when we finally returned to Reykjavik, dropped of Jan... To then search for a gas station where we could wash the car. We had promised to bring back the car the same night. Which meant it should be at the office BEFORE it opened again at 8 o’clock the next morning.

So we each grabbed one of the brooms that had a water hose built-in and scrubbed the superjeep. In the middle of the night, completely tired out and chilled through… When we dropped the car at the office and called a taxi back home, it was already five o’clock. And we discovered that we hadn’t finished our homework yet that we were going to present the next morning at 10… :D

Your own Superjeep experience in the Highlands:

Or just do it on your own! (But please, check all the safety instructions first:p) Rent a Car!