A week of incredible northern lights madness in Reykjavík!

This week has been absolutely spectacular when it comes to the northern lights in Iceland, especially in Reykjavík.

Let me tell you some basics about the Northern Lights.

Where and when can I see the northern lights? 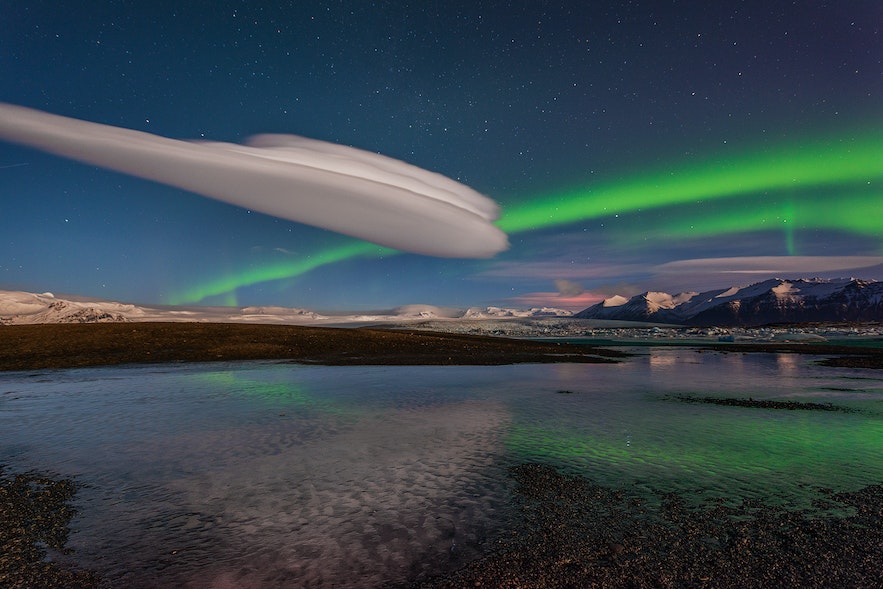 The northern lights can appear anywhere and everywhere in the sky, any hour of the day and anytime of the year. There's no special place or special time of the night to go and see them. (I get a lot of questions asking me where and when you should look for the auroras).

However, they are not visible unless it is dark outside and some clear sky. The Icelandic summer doesn't get dark at night due to the midnight sun - and that's the only reason they're not visible during the height of summer. By August however, the nights get dark for a couple of hours, so they can be spotted in late August. You can also spot them if they are very bright when it is getting dark.

A lot of people believe they mainly appear when it is cold. That's kind of true, they do often appear brightly on colder days - but that's mainly because clear days tend to be colder than cloudy days. The temperature on the ground has got nothing to do with the temperature up high in the atmosphere where the auroras take place. 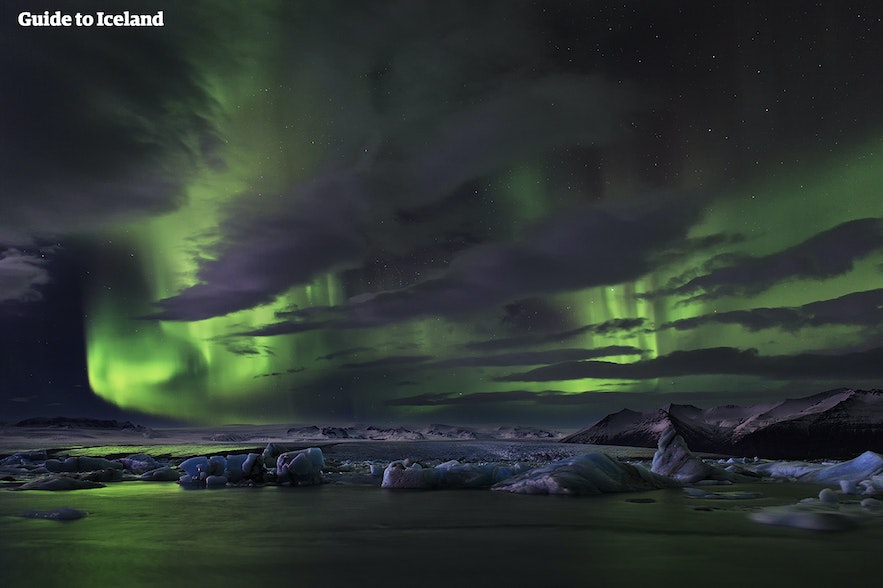 That's not to say it's impossible to see them on cloudy nights. If there's a total cloud cover, then yes, you won't see them (unless it clears up a bit). But if there are just a few clouds, then you can see them in between the clouds.

It's impossible to see the northern lights in Reykjavík, right? 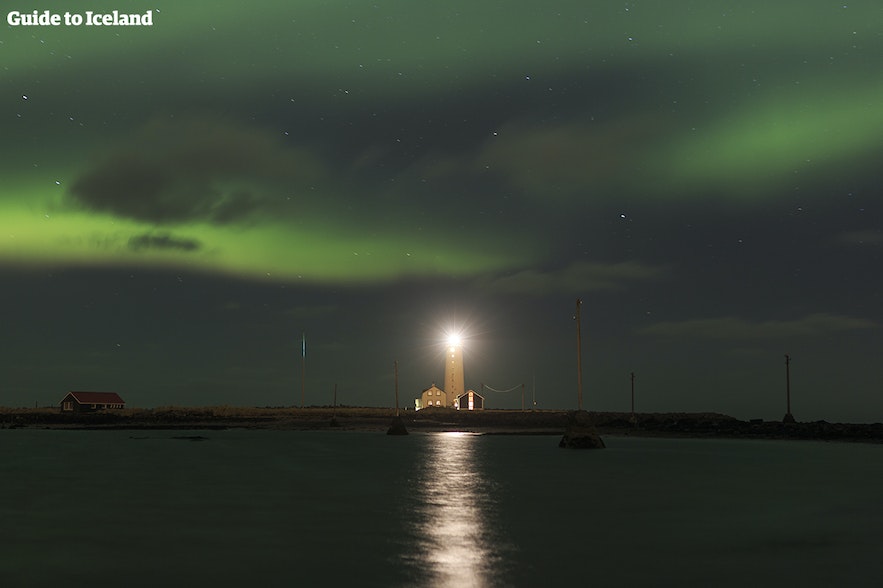 A lot of people believe it's impossible to see the northern lights above Reykjavík. That's completely not true. If you go on a northern lights tour, the tour will leave the city of Reykjavík - but that's just so the light pollution from the city doesn't interfere with your view of the auroras.

The northern lights tours are great to learn more about this phenomenon and find out what to look out for from locals, however you may not need to go on a tour to see the lights, even though it can be helpful. If there's a better chance to see the auroras in a specific location outside of where you are staying then it's advisable to go on a tour - or rent a car and drive yourself. You can also choose to go on a northern light tour on a boat or combine it with a dinner feast, making the most of your evening.

How long do the northern lights last? How often do they happen? 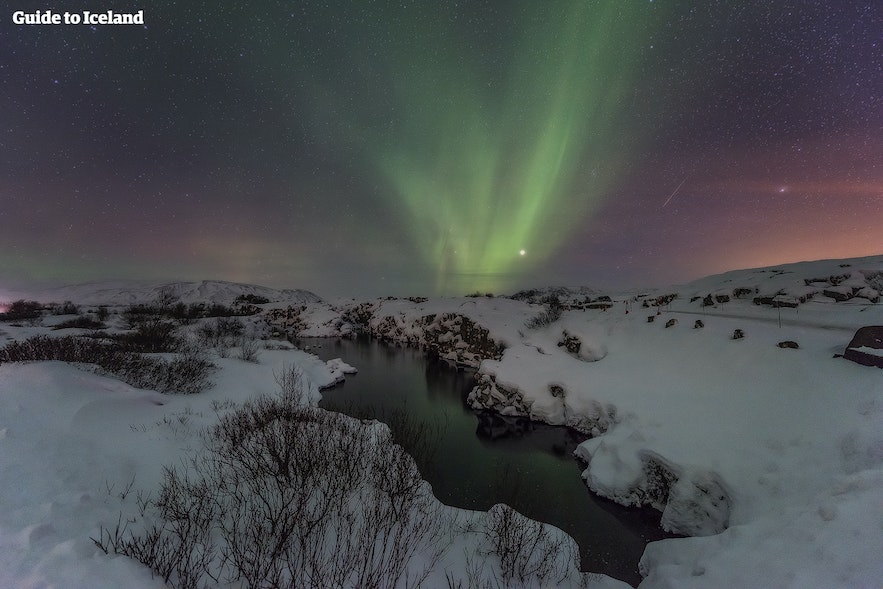 It's good to think of the northern lights like any other natural phenomenon, like wind or rain. It's almost totally impossible to predict it accurately. Weather forecast has some idea if it is going to rain somewhere, and how heavily it will rain - and likewise aurora forecast does the same. Sometimes the forecast gets it right, sometimes it doesn't. And it can only predict weather - or auroras - a couple of days in advance.

Why do the northern lights always look worse on pictures from my phone? 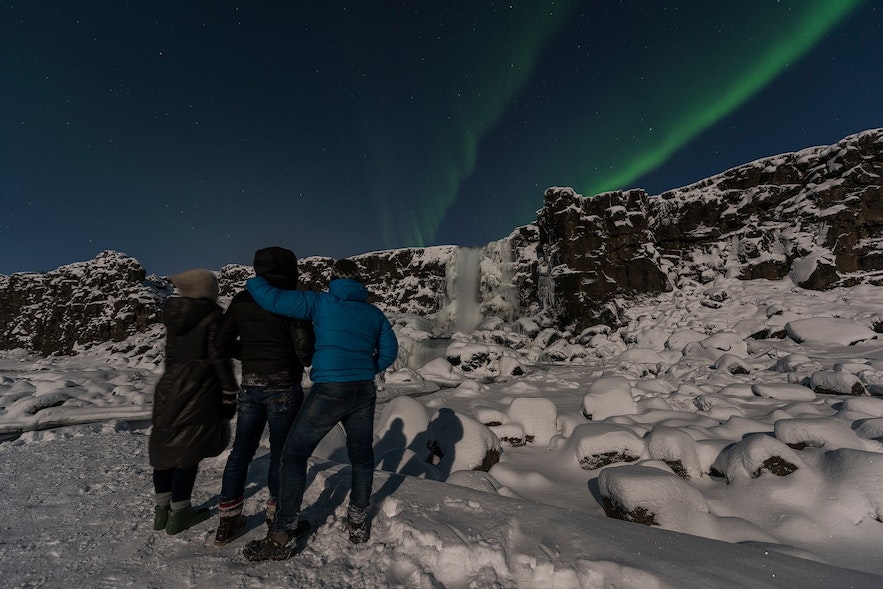 It's a bit tricky to take pictures of the northern lights since it's always dark when they appear. You'll need a good camera to capture what the eyes can see. The cameras in phones or small, cheap cameras normally don't get the results that you were hoping for.

Don't use the flash, it won't help.

It's the same if you're trying to take a picture of the full moon or the stars, they may look great for the naked eye, but you'll just get a black picture with your phone, maybe with a little bright dot.

Are the pictures from good cameras false? The northern lights were not that bright when I saw them... 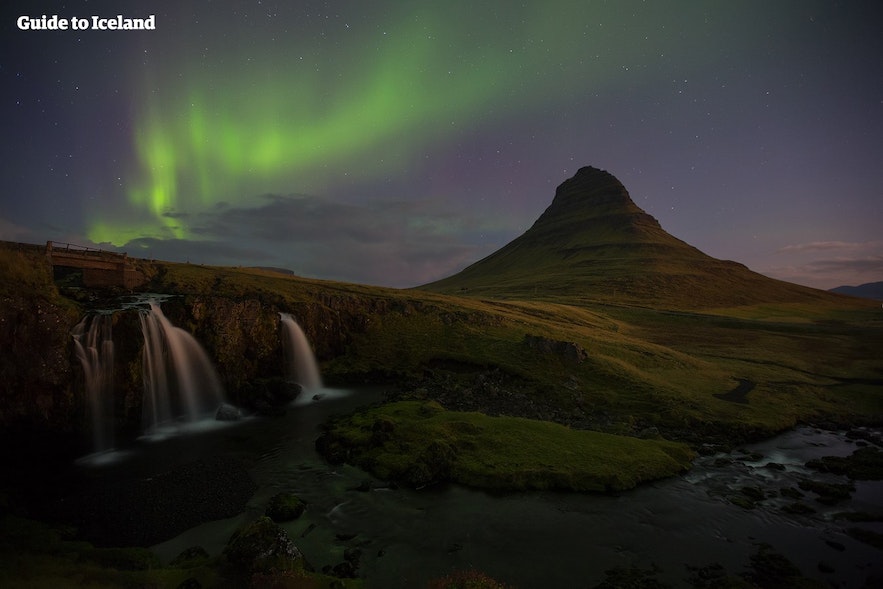 This is a complaint I've seen from a number of people, thinking that images from nice cameras are photoshopped or altered, which is perhaps sometimes the case, but not nearly as often as you'd think.

True, the camera will pick up more colours than your eyes can see if you set the aperture on it to capture all the light it can pick up in a few seconds. So some images will have slightly brighter colours than you see them in reality.

However, the lights vary in intensity from day to day (or from night to night). Even if you (or someone you know, or someone whose comment you read) saw a little faint colour of green in the sky, that may just mean that they caught them on a night when they weren't really active. Like experiencing rain for the first time but only getting a tiny drizzle, or just a bit of moist, foggy air - and then thinking that's what rain is always like.

Believe you me, just as you can drenched with buckets of water pouring down from the sky, you can also see the incredibly colourful northern lights covering almost every inch of the sky and dancing ferociously for hours on end. 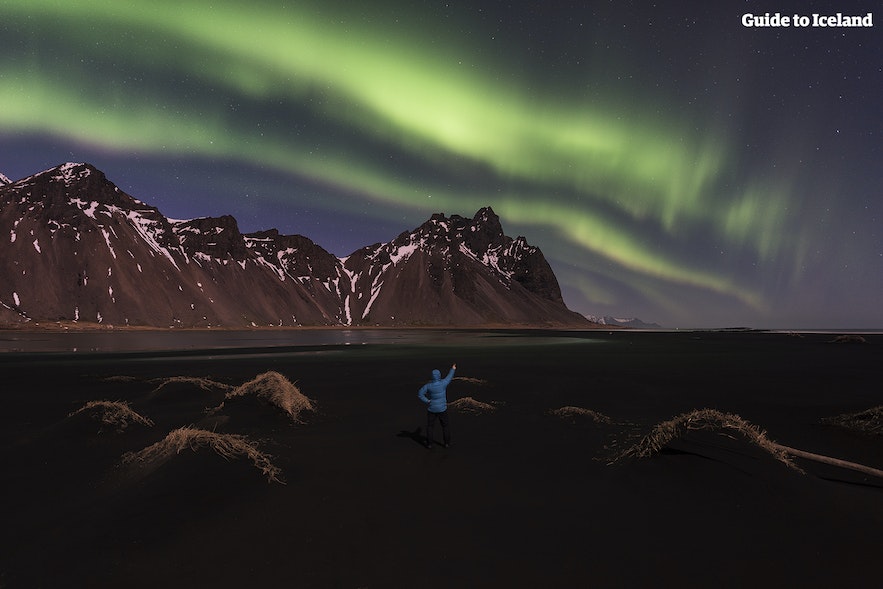 I'm not a professional photographer myself, and don't own a great camera - but after having lived in Iceland for many years, I've definitely seen the lights many times as bright (or even brighter!) as the pictures in this blog.

How can I see the northern lights in Iceland? 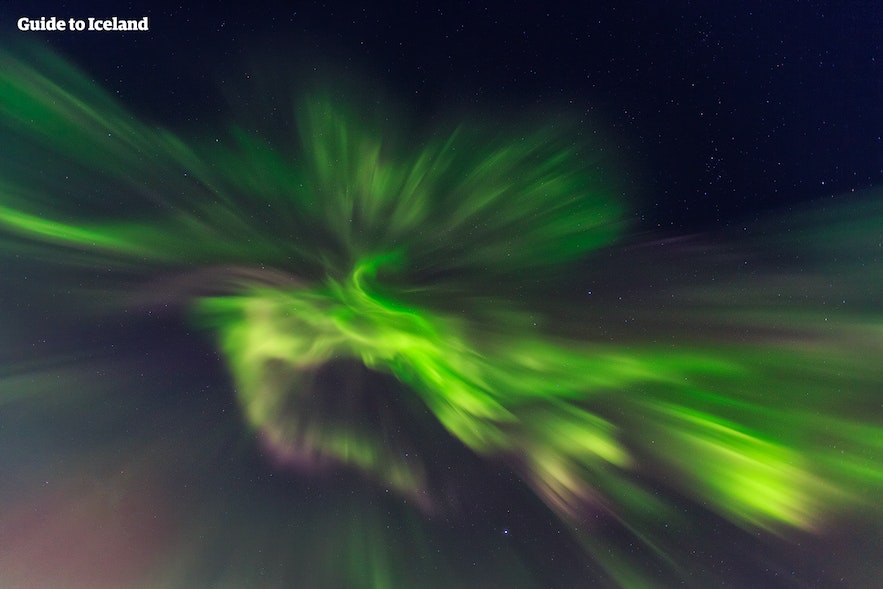 My number one tip for seeing the northern lights: LOOK UP IN THE SKY WHEN IT'S DARK AND KEEP LOOKING UP!

Over the past couple of days there have been fantastic auroras in the sky over Reykjavík, and I have walked past a great number of tourists that are obliviously staring at the pavement (and when I've pointed out that the lights are out they are completely unaware of it).

Notice your surroundings, you don't have to be on a tour with a guide explaining the northern lights to you, they are just there for you to admire.

If you look up once and they're not there, make sure you check it again 5 minutes later. And again. And again. Just keep checking the skies (unless there's a total cloud cover, then just go into a bar and have a drink or listen to some cool Icelandic live music).

Those were the basics.

What's going on with the auroras in Iceland this week? 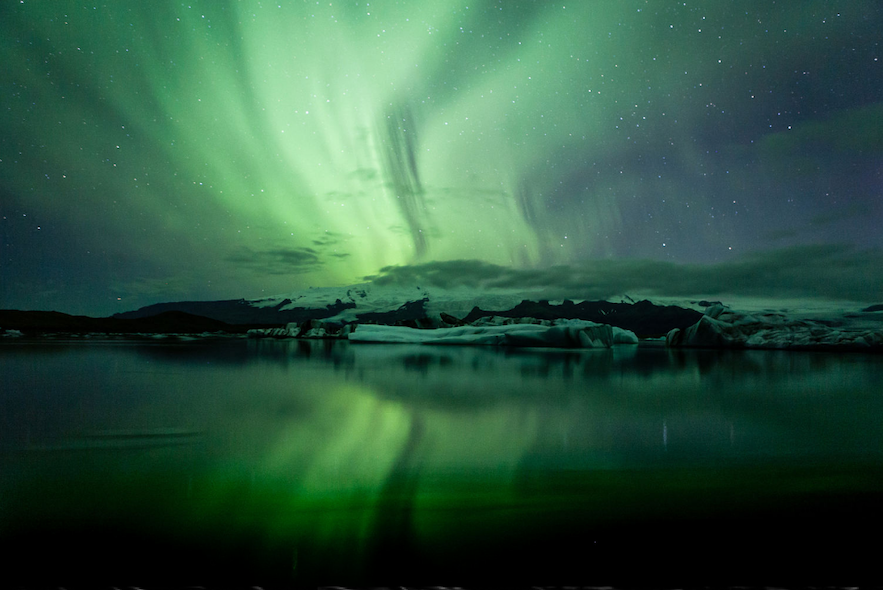 Picture by a friend of mine, Unnur Eva Arnarsdóttir, taken over Jökulsárlón glacier lagoon last night.

I was doing some outdoors work in the evening, so I caught a lot of the colourful display, most of it between 11pm and midnight. The lights were so bright they even appeared on a picture taken on my iphone. (All the following pictures are taken on an iphone, which explains the grainy, poor quality - if you want to get some proper aurora pictures from your holiday, you'll have to first invest in a good camera where you can adjust the exposure!) 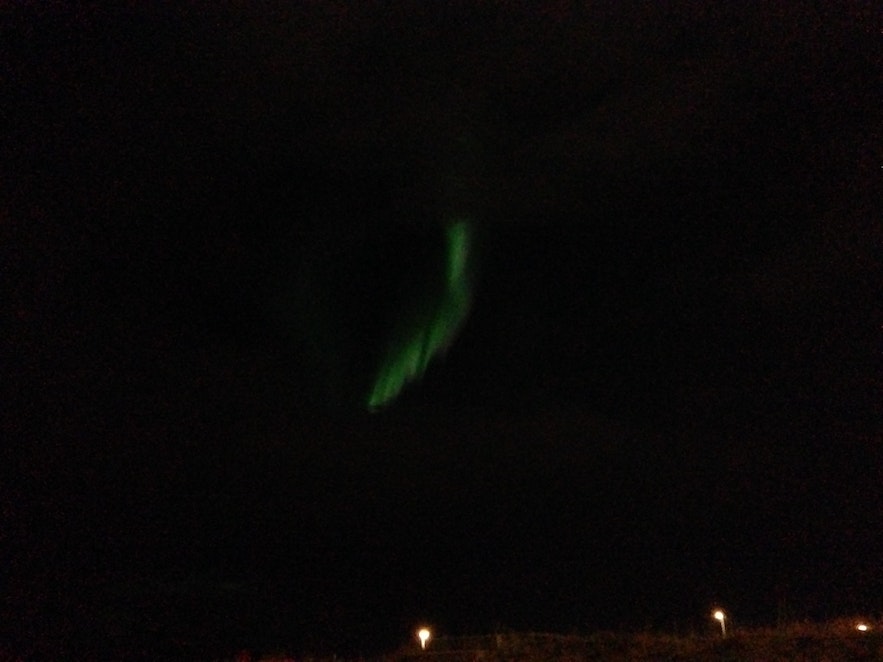 Last night (Monday) there was a completely clear sky however. I went on a helicopter ride to Glymur and Hengill in the afternoon (it was amazing, I'll write a special blog about that soon) and could see that the skies were clear all over the south coast of Iceland - so I figured the conditions were prime for a good night of the auroras. 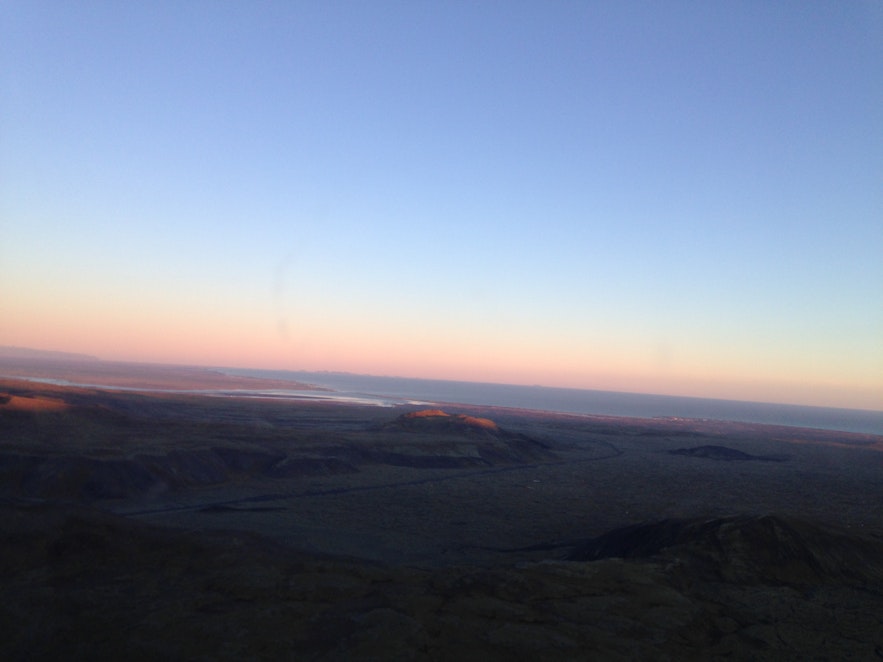 Sunset over south Iceland, picture taken from a helicopter tour with Norðurflug.

Just after sunset, when it was still dusk (around 8:30pm) I was heading to a gig at Kex hostel (with an AMAZING psychedelic band called Kikagaku Moyo from Japan), and even though it wasn't completely dark outside - the auroras were already very visible and strong. Again, I tried catching some of it on my iphone (wishing I had a better camera) and these were the results: 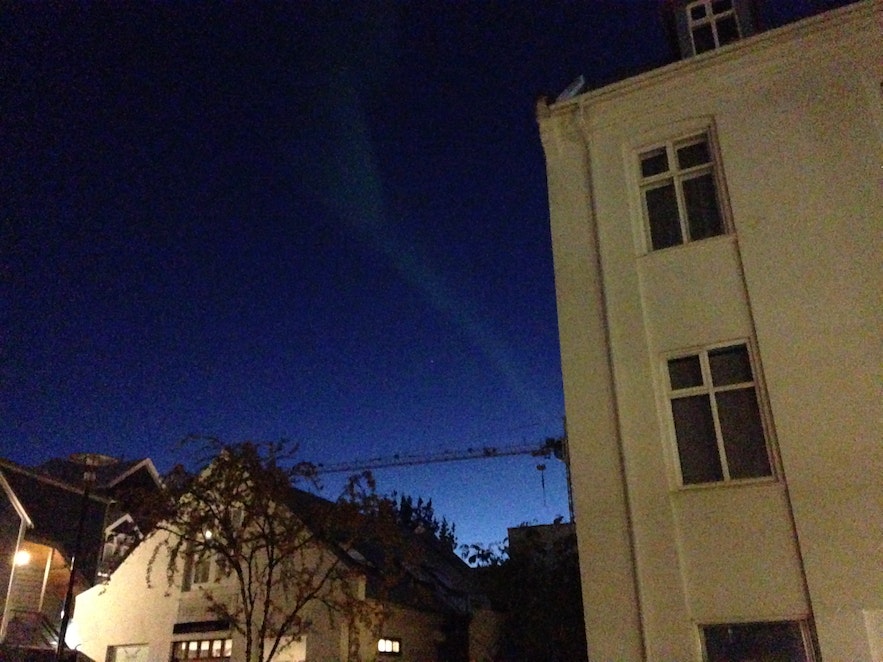 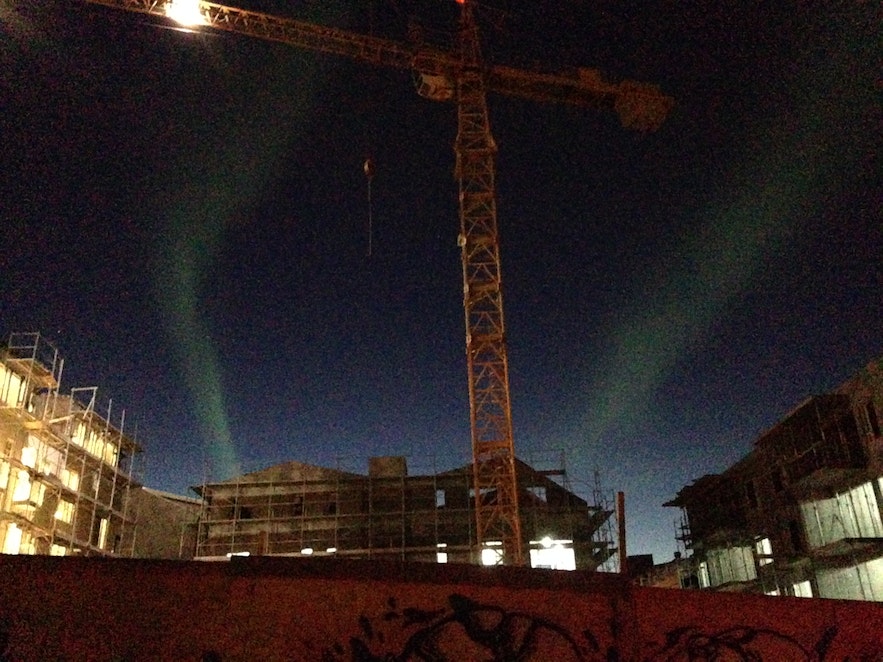 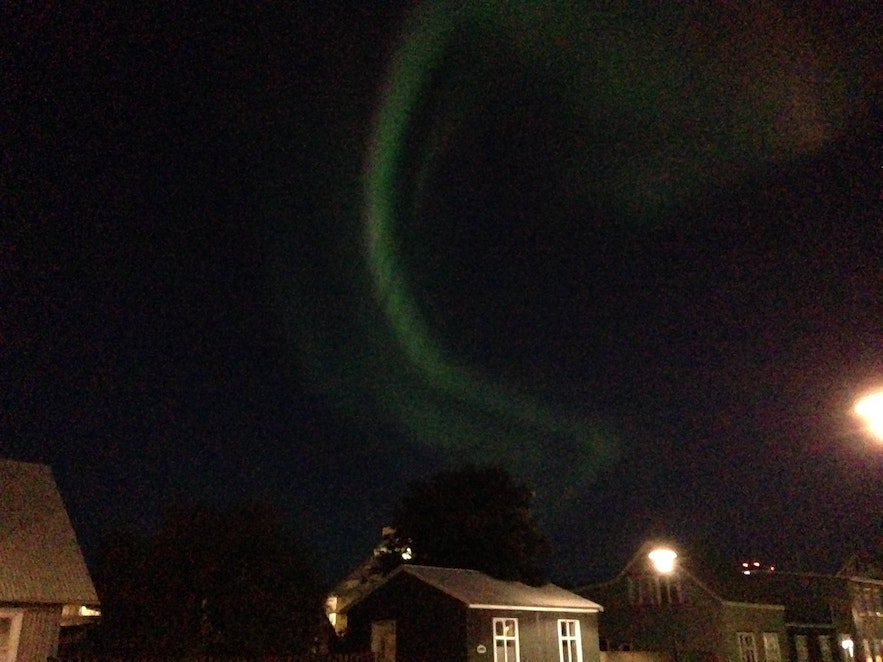 Needless to say, the lights were much brighter and clearer in reality than in those pictures.

After the gig, I was also greeted by northern lights covering the entire sky, around midnight. I went to a friend's house for half an hour, and by the time I was walking home, they'd taken a break (or stopped for the night).

Apparently though, if you're patient and a better photographer than me (or simply have a better phone!) then you could get pictures like this on your phone (taken with Huawei p9 plus by the talented photographer Edwin Martinez). These pictures are all taken on the south coast of Iceland (with a phone!) in the last couple of days: 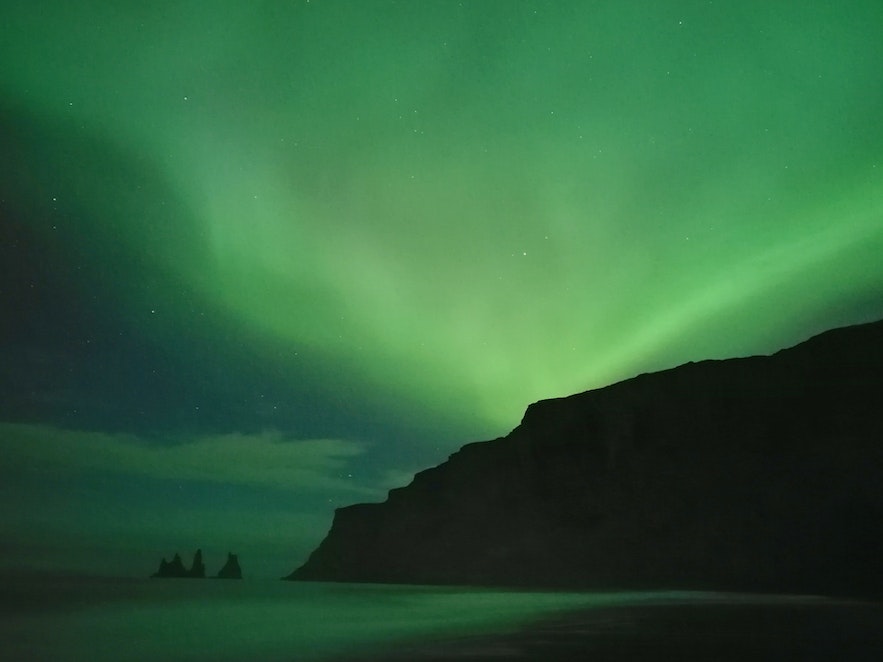 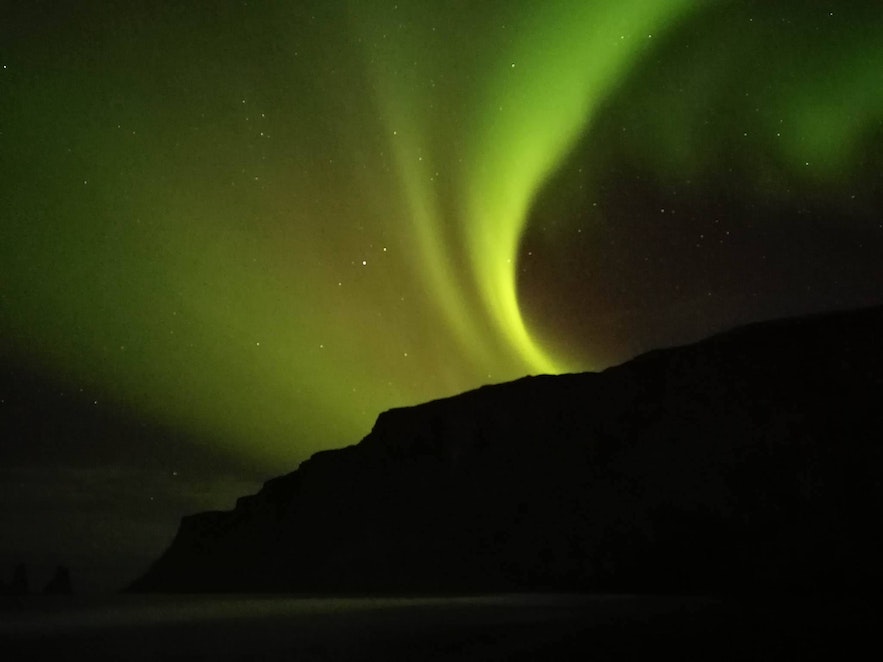 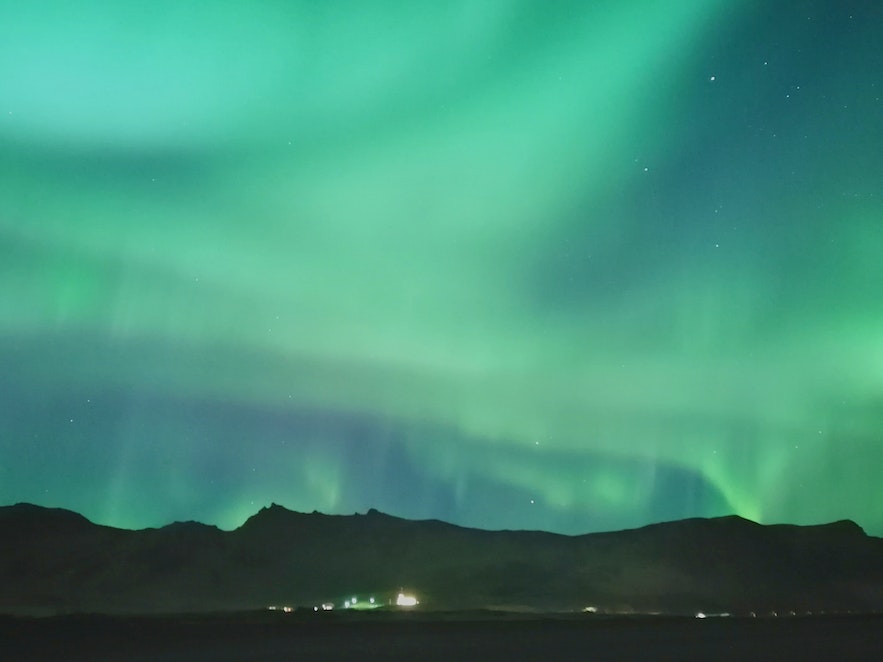 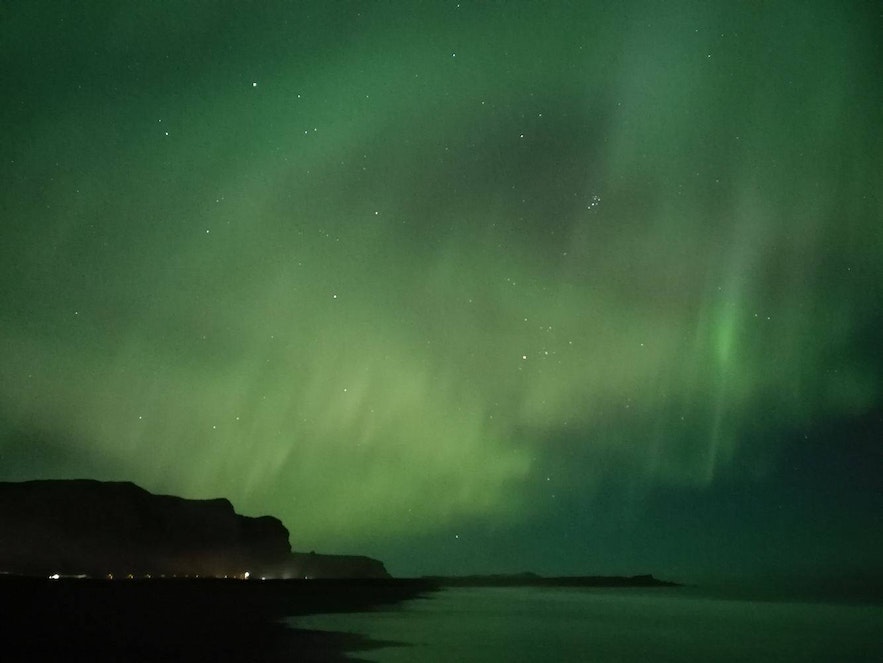 (I might need to invest in a phone with a better camera!)

Also, check out Edwin's facebook page for pictures taken with a proper camera to be totally blown away!

When are the auroras visible next?

Tonight (Tuesday 27th of September 2016), tomorrow night and Thursday night all have very strong aurora forecast and clear skies. The forecast doesn't go as far as Friday or the weekend, but perhaps there are going to be strong lights then too.

According to the aurora forecast, the lights will be at their strongest tomorrow, on Wednesday night (28th of September 2016). The city of Reykjavík will even turn off all city lights for an hour between 10pm and 11pm, so that people can enjoy them to their fullest!

So if you're in Reykjavík, or anywhere else in Iceland - remember to look (frequently) up in the sky for the next few nights! :) And if you want a great picture, make sure you've got the right equipment for it! 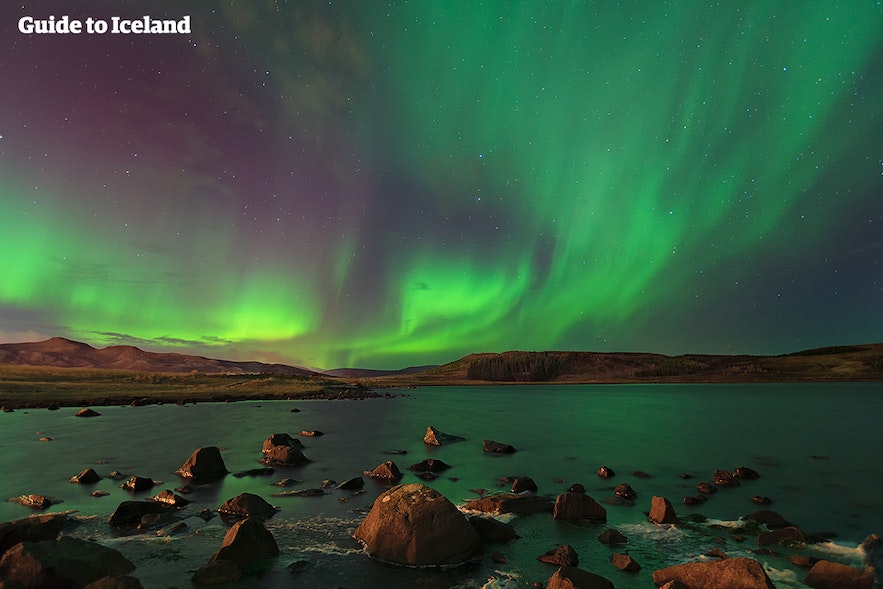