Iceland is now safe from Covid-19 after the government was able to eliminate the virus from the country. Please visit our dedicated Covid-19 information & support page for all the latest updates on current travel restrictions in Iceland.

When is the Midnight Sun in Iceland? 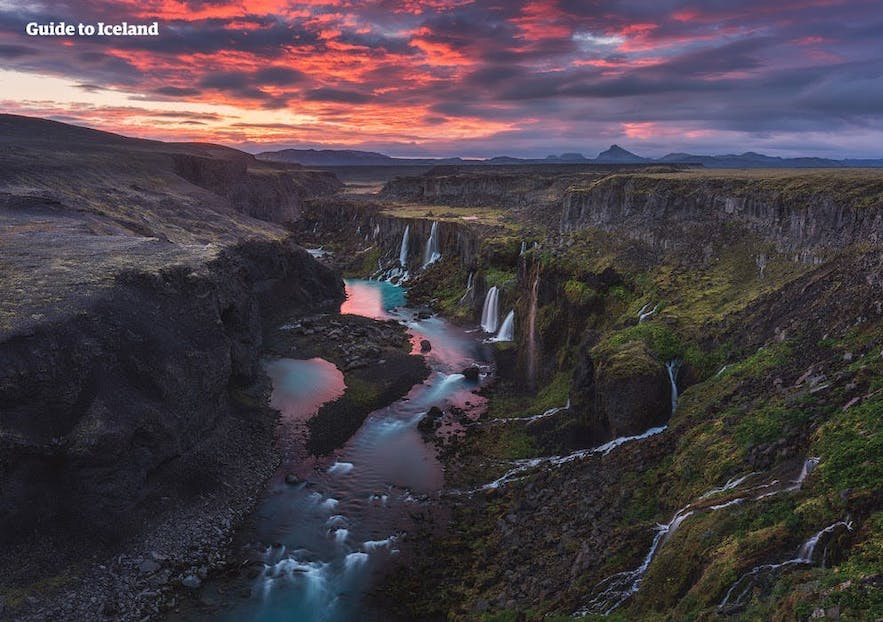 The days are long during the summertime in Iceland. Although the Midnight Sun peaks in June, Iceland’s nights are bright as early as May and as late as August.

As the Arctic Circle’s latitude starts at around 66.5°N, and Reykjavik’s is located at 64.1°N, the sun will still set in Iceland throughout the summer.

However, in the height of summer, this will only leave Iceland with a few hours of bright civil twilight until full daylight resumes once more.

Civil twilight is a scientific term given for the period of time the sun is only a few degrees below the horizon.

So for Iceland, at the height of summer, it doesn’t get remotely dark across the island.

Iceland is not the only country in the world to experience this dazzling natural phenomenon.

All countries north of the Arctic Circle and south of the Antarctic Circle will also experience the Midnight Sun during their summer months.

That includes Greenland, Norway, Sweden, Finland, Russia and the US state of Alaska.

Facts About the Midnight Sun in Iceland

What Causes the Midnight Sun? 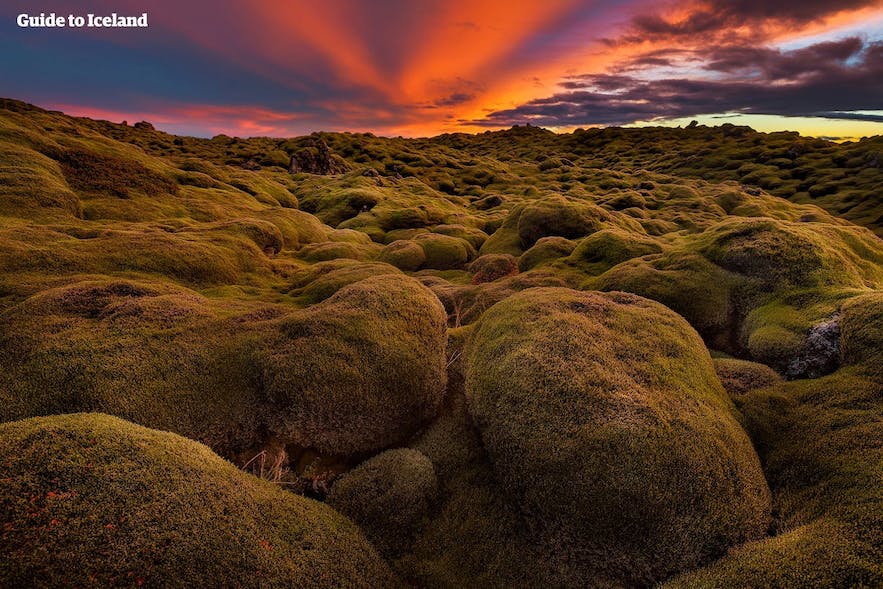 The Midnight Sun is caused by the tilt of the Earth's axis towards the sun during summer.

This same tilt of the Earth's axis, along with the Earth revolving around the sun, is what causes seasons to happen.

The poles of the Earth get the most contrast, both being exposed to the sun's rays continuously for 6 months, and then experiencing total darkness, or Polar Nights, for the remaining 6 months of the year.

As a result, both the North Pole and the South Pole have the Midnight Sun, sporting continuous daylight for 6 months.

From late March to late September it is bright at the North Pole, and dark at the South Pole, whilst the other half of the year sees this switch. 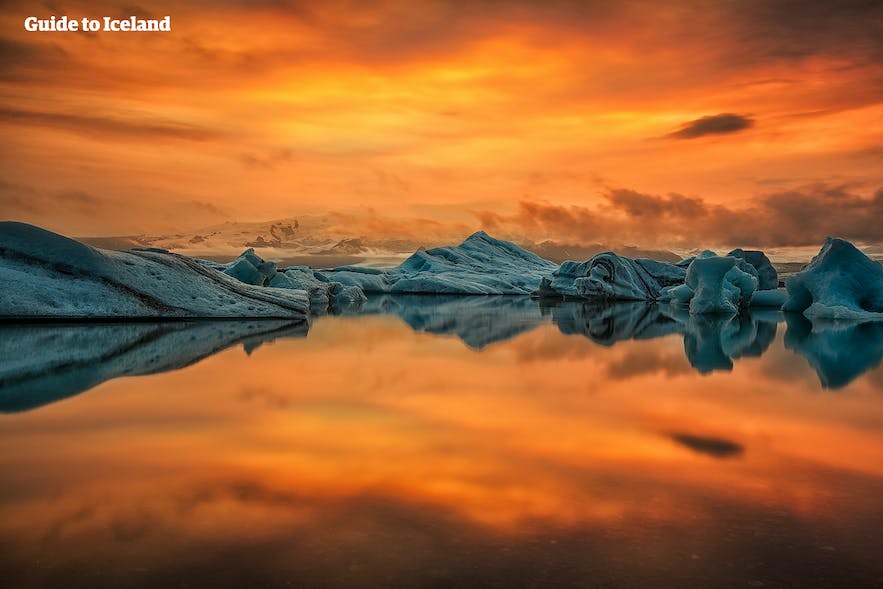 The closer you are to the North or South Pole, the more drastic the change is going to be between the summer and winter season.

Most people in the world live far enough away from these poles, so the daylight hours and nighttime hours more or less stay the same all year round.

That is not the case in Iceland; here, when it comes to daylight hours, it is an all or (barely) nothing experience.

Still, Iceland is far away enough from the North Pole to not experience such a crazy contrast.

And winter is not completely dark either, although December and January only experience 4-5 hours of daylight each day.

How Do You Sleep During the Midnight Sun? 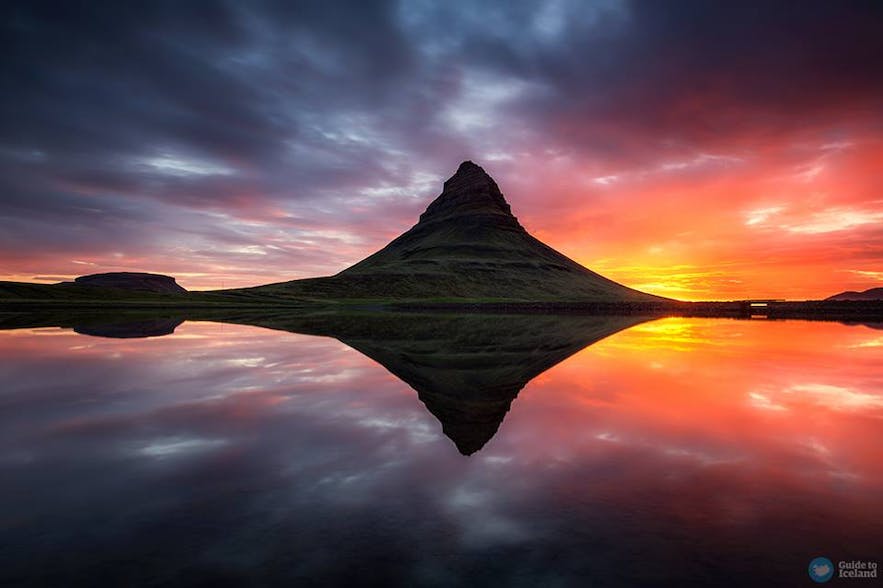 Naturally, many people find the concept of the Midnight Sun incomprehensible and can hardly contain their questions about it.

Amusingly, the most common one is: “How do you sleep?”

My answer to that is, simply, many people around the world can sleep with the lights on, or during the day for a little siesta.

If you have to sleep in total darkness, do not despair! Thankfully, there is a clever invention called “curtains” that can be utilised throughout Icelandic homes.

You can even use black-out curtains to eradicate any hint of sunlight (preferable for vampires or those with sun allergies).

Another common question is: “Isn’t it weird for it to be bright all night long?”

Well, the short answer to that is yes; after experiencing such a dark winter, endless days of sunlight do make a striking difference.

The long days become part of your daily life, feeding your energy with 24/7 light.

And it’s great for sightseeing too! No more worrying about time restraints, needing to get somewhere or get home or get to bed "before it gets dark".

What Is There to Do During the Midnight Sun in Iceland? 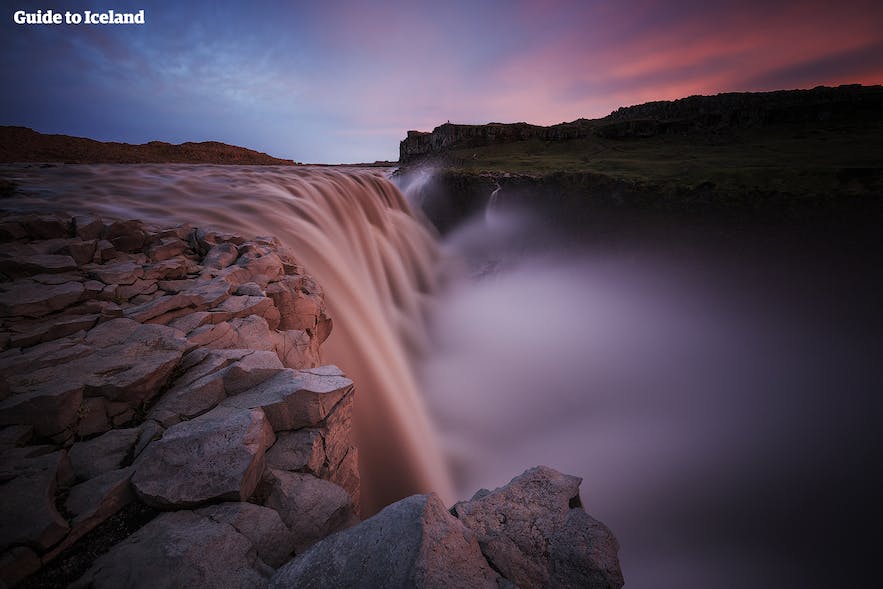 Some tours take advantage of these late nights. Available to you are midnight sun tours, like the Golden Circle, whale watching or mountain hiking.

Taking a midnight sun tour provides you with an opportunity to experience some of Iceland's best attractions in a truly unique way, thus maximising your time on the island.

If you rent a car and are travelling late at night, there will be fewer people around, so you can see gorgeous destinations in stunning twilight colours and be completely on your own.

This is just one of the reasons why travelling during the hours of the midnight sun is so often memorable, exhilarating and heartfelt. 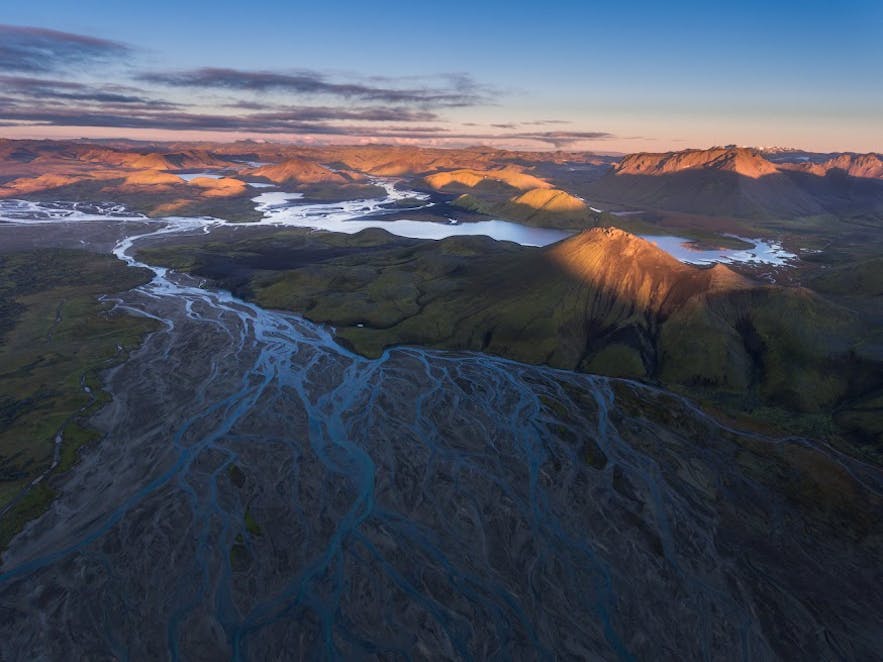 During summer, it is possible to travel everywhere in Iceland, whereas during the winter months, some areas of the country are not accessible.

The Icelandic Highlands is one example of a region that is only accessible from late June or early July until September.

At the height of winter, it may be difficult to access the Westfjords, and even some parts of North and East Iceland due to heavy snow and bad weather.

This is not a problem during summertime. Although it may sometimes be windy, rainy or foggy, it’s highly unlikely that there will be any snowstorms hindering your travel plans around the country. 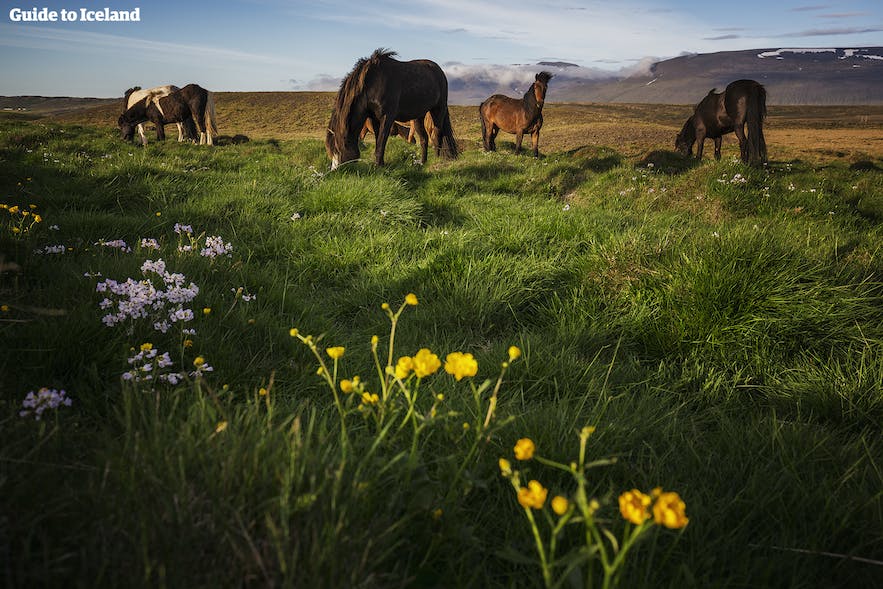 We recommend renting a car and exploring the country at your own pace.

There's a variety of summer self-drive tours available, where it's up to you to choose if you want to visit some of Iceland's attractions at noon or at midnight.

There is also a plethora of exciting tours available during this more agreeable part of the year, such as:

And with the long days, you can fit in more hours of sightseeing, driving around and doing activities to max out your holiday time in Iceland.

Summer and Winter Solstices in Iceland 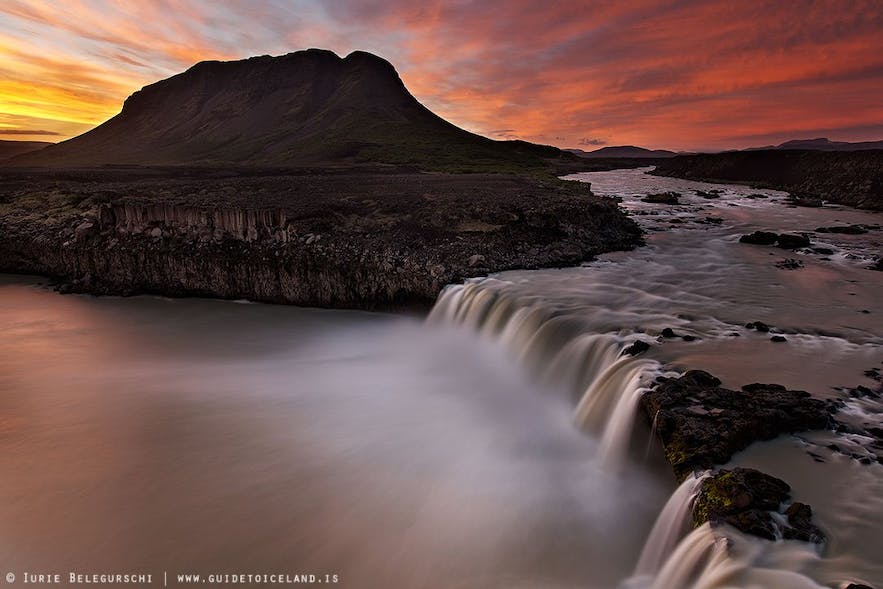 The further north or south you go on the planet, the more effect there is by the summer and winter solstices.

Iceland’s longest day of the year (the summer solstice) is around the 21st of June.

On that day in Reykjavík, the sun sets just after midnight and rises again just before 3 o'clock in the morning, with the sky never going dark.

The further north you go in the country - such as to Akureyri or Ísafjörður - the longer you will find the days.

This makes experiencing time in Iceland a truly unique concept, unlike anywhere else on the planet.

The shortest day of the year (the winter solstice) is around the 21st of December.

Again, the further north you go in the country, this day will be even shorter. 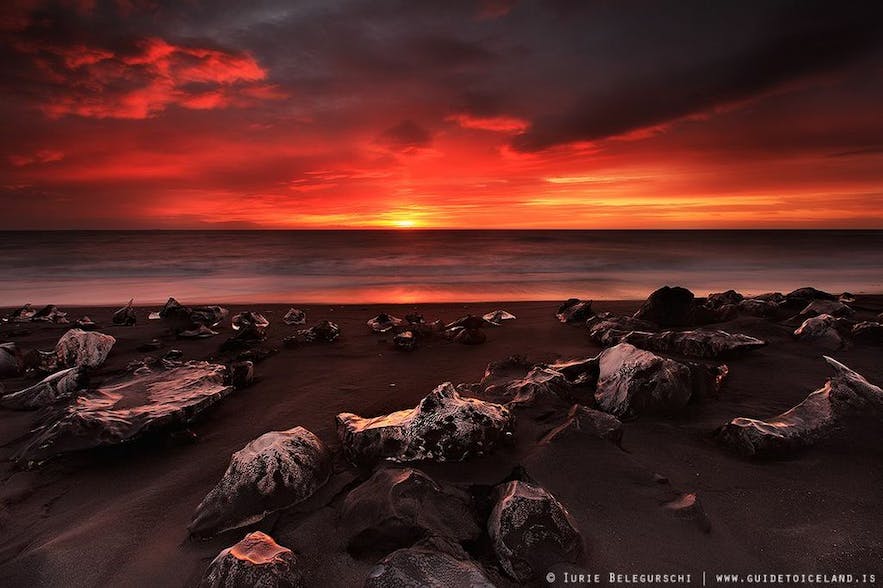 In between the shortest and the longest day of the year, the days are either getting longer or shorter, from just a few seconds up to several minutes per day.

An equinox occurs twice a year, around the 21st of March and September, when there’s roughly an equal amount of daylight and darkness.

So if you want to know how much daylight there is in a particular month, note that there can be a drastic difference from the beginning and the end of the month, and which location you are planning on visiting in Iceland. 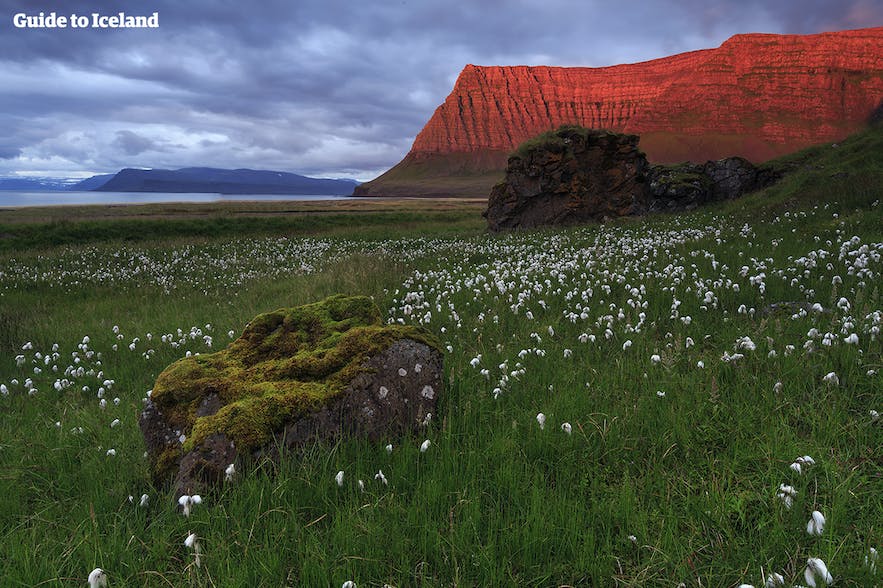 The sun isn't seen at all for around 2 months in the town of Ísafjörður in the Westfjords of Iceland.

The town is surrounded by tall mountains and is situated so far north in the country that the sun doesn't rise high enough for its beams to reach over the mountaintops in wintertime.

It is a well-known tradition that the people in Ísafjörður celebrate the first day they see the sun after 2 months of darkness by baking pancakes and having 'sun coffee'.

The absence of the sunlight is not nearly as drastic in Reykjavík, a city that is not surrounded by any mountains and is situated south in the country.

What About the Time in Between Sunset and Sunrise? 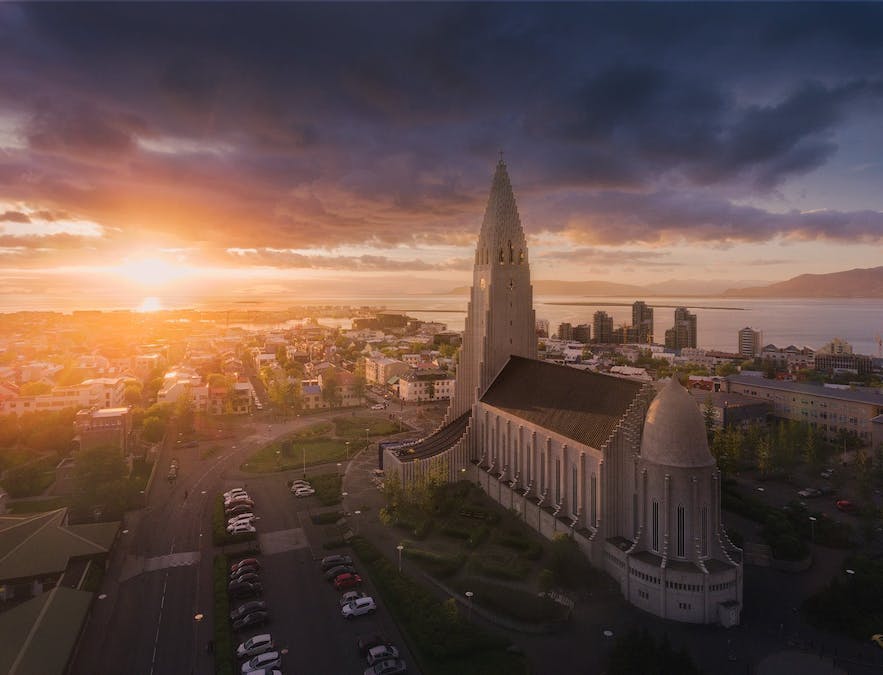 Technically speaking, the midnight sun only occurs in Reykjavík between the 16th and the 29th of June, since these are the only days of the year when the sun sets after midnight.

But if you take into consideration that the sunrise will only be a couple of hours later with it only dipping marginally below the horizon during the civil twilight hours, then you’ll realise that even though the sun isn’t up, it is still bright.

The bright nights last for around three months (one and a half months before and after the 21st of June).

So the height of the Midnight Sun in Iceland is in the last two weeks of June, but if you are visiting Iceland in May, early June, July or early August then you will also get to experience the Midnight Sun. 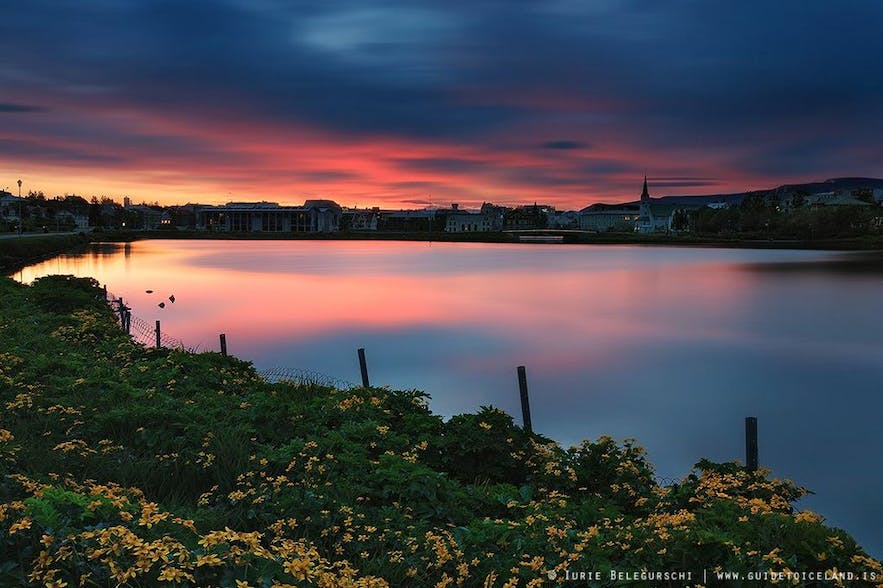 The slow sunsets and sunrises make for incredibly picturesque displays of colourful twilight skies that last for hours.

At the beginning of August, a couple of hours per night can get quite dark, not more than dusk though.

Towards the end of August or beginning of September, there will be a couple of hours of pitch black night, so the Northern Lights will start making an appearance in the sky as well.

Late August or early September is the perfect time of year to experience the long days and milder weather, but still with a few hours of darkness during the night to catch some Auroras dancing in the sky.

So if you’re looking for a place to go during summertime where you get more hours out of the day (without affecting the crazy nightlife), Iceland is the place to go! 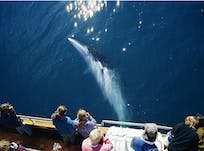 Top 12 Things to Do in Iceland

What are the Top 12 activities and experiences you shouldn't miss while on holiday in Iceland? What are the most popular tour choices and cultural excursions? What are the “Must-Sees” and “Must-Do’s...