Iceland is the Smallest Nation EVER to Participate at the World Cup!

Iceland just became the smallest nation in the world EVER to make it to the World Cup! With Iceland's win over Kosovo on the 9th of October 2017, Iceland guaranteed it's place at the 2018 World Cup in football in Russia.

For anyone that doesn't understand why all Icelanders, including those that don't care so much about football, are currently jumping for joy, let me break it down a little.

How Does Iceland's Size Impact the Game? 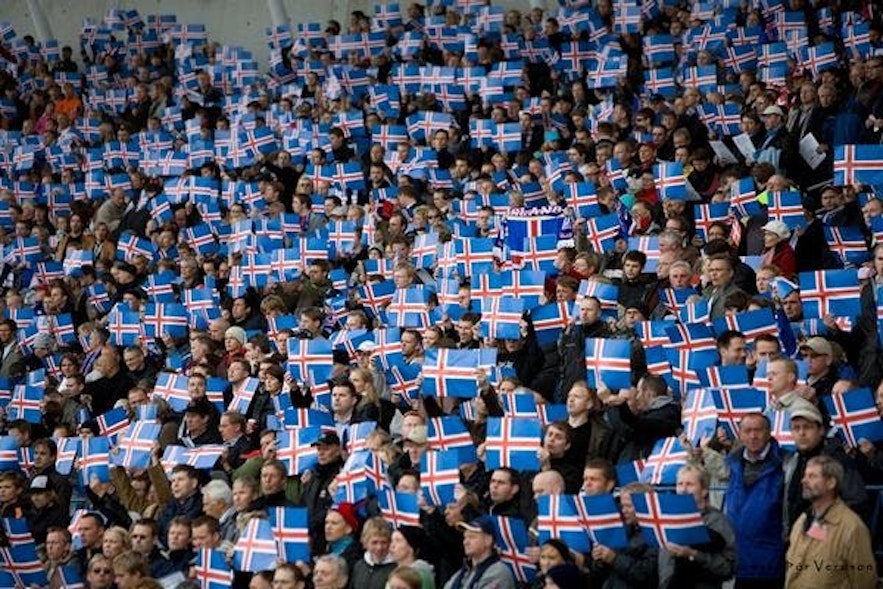 Iceland has previously had a much better track record in another group sport; Handball. The Icelandic handball team won the silver medal at the Olympics in 2008 - and at the time the nation didn't think we could ever do better than that in a group sport.

I will definitely need to update the article I wrote about Famous People From Iceland!

What needs to be kept in mind, when the country's population is so small (perhaps the size of your small town, or a neighbourhood in your large city), it's very likely that everyone knows someone. Almost every Icelander will try to make a claim to the team in one way or another. The team members are someone's siblings, boyfriends, uncles, friends - or perhaps their dentist. (The coach, Heimir Hallgrímsson, worked as a dentist until very recently).

My personal claim is that I'm related to one of them, and friends with another. So obviously, even if people don't usually watch sports or football, they still partake in the joy and success of their fellow countrymen, friends and relatives.

As an example, when Iceland competed in the Euro cup in France in 2016, it's estimated that around 10% of Iceland's population travelled to France to watch the games. Perhaps 20% of Icelanders will be going to Russia next year to support 'our boys' in the World Cup - that's how our national team is referred to as, 'our boys' - or 'strákarnir okkar'.

What Makes the Icelandic Football Team So Good?

Something that the Icelandic team, and the Icelandic fans, have been noted for - is their passion for the game, and sincere joy when things go well. Keep in mind, before 2016 Iceland's football team had NEVER participated in a European Championship before - and participating in the World Cup is a dream that many people thought would never happen.

This remarkable success comes after years of preparation and training, with a series of great coaches and a young team that respects each other and works well together. There's a lot of respect and teamwork within the Icelandic team, and no ego is bigger than another.

Hard work is put into every game, collaboration and sincerity - you won't see any acting skills from the Icelandic players, no 'diving' and fake injuries take place within the team, and the coach (and former coach) want to see punishments for that kind of behaviour.

Much praise goes to the coach, Heimir Hallgrímsson, that took over the team completely after having co-coached it with Lars Lagerbäck that helped laying the foundation of the team's strategies today.

However, Iceland mainly relies on their strong defence.

Defence player Birkir Már Sævarsson is the one that has played the most amount of national games, or around 80. He currently plays for Hammarby in Sweden. Playing alongside Birkir in the defence is Ragnar Sigurðsson, that should feel like on home turf in the World Cup since he currently plays for Russian team Rubin Kazan.

Other members of the team have played between 1 and 65 national games, and most of them are playing professionally for foreign teams.

It's also worth noting that this isn't just good luck and an underdog fairytale. Iceland has a track record now of playing consistently well, which the world took notice of in 2016 when they played at the UEFA European Championship, and came 8th.

Who knows what will happen in Russia? They might just go the whole way, and sure shouldn't be underestimated now! Congratulations boys for making it the whole way, you've made Icelanders very proud!

If you want to know all there is to know about Iceland's football history, then make sure you read Football in Iceland | The Secret To Success.