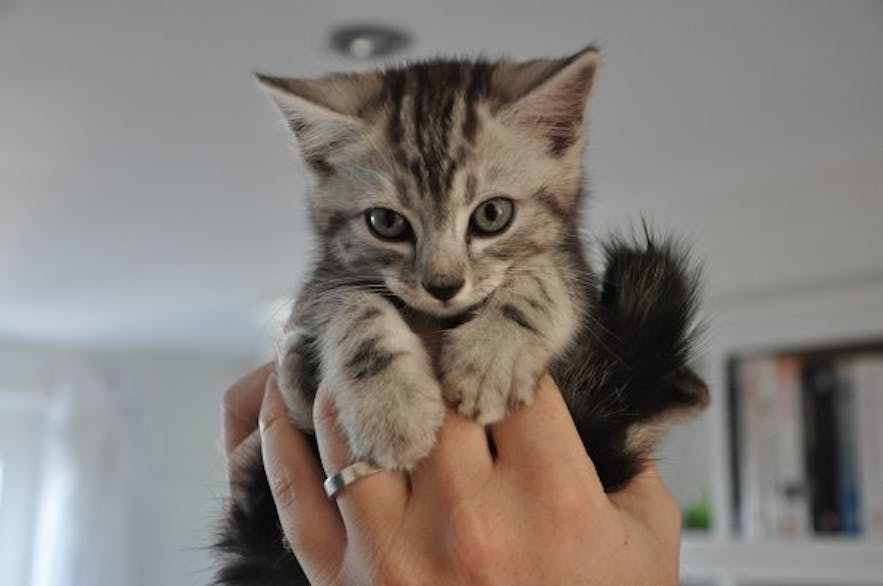 Have you heard about Iceland's Christmas Cat? Do you know any other cats in Reykjavík? Are you looking for a cat café in Iceland? Perhaps you want to watch Iceland's cat reality show? Learn all about cat spotting, and Iceland's most famous kitties here! 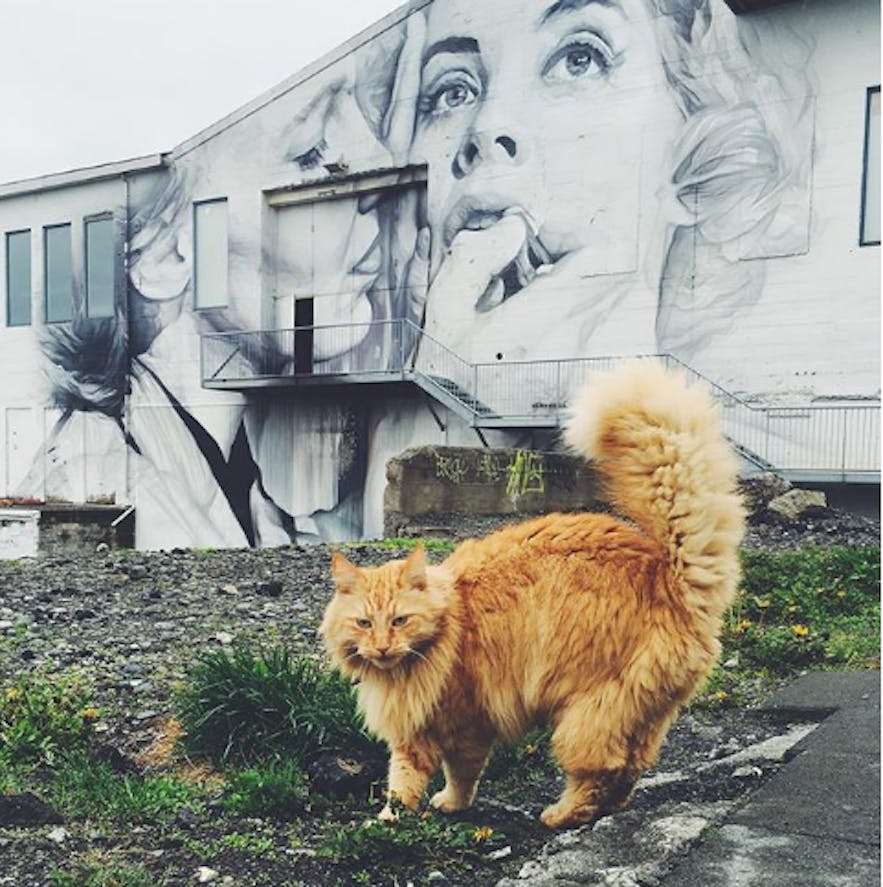 Reykjavík, city of art and cats. Photo from Reykjavík Cats

This city truly is a cat-lovers paradise, with dozens of outdoor little furry pets roaming the streets. The cats you'll see out and about all have loving homes, and are simply allowed to explore the relatively safe streets of Reykjavík. Cats without homes are normally in cat shelters, or you can adopt some homeless cats from Reykjavík's only cat café, Kattakaffihúsið.

Cats can be spotted all over town, but people living in the old and large houses in downtown Reykjavík are more likely to have these furry pets than those living in apartment blocks in some of Reykjavík's suburbs. Likewise, you can very likely spot a cat around farms in the Icelandic countryside. 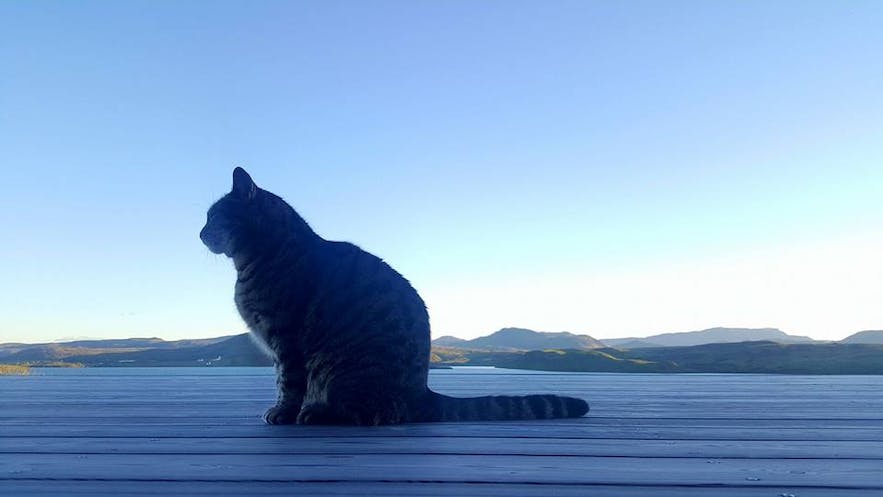 Eyja on a weekend trip in the countryside

Cat in Icelandic is Köttur, but as Icelandic words take on different forms depending on the sentence, then it can also be Kött, Ketti and Kattar. And in plural that's Kettir, Ketti, Köttum and Kattar. And then there are some other words such as Kisa (e. kittie) and Kettlingur (e. kitten). A tomcat is called Högni, and a female is called Læða.

There is an Icelandic facebook group called Spottaði kött (e. Spotted a Cat), solely for the purpose of posting pictures of cats that have been spotted around town. It has more than 7 thousand members and is updated daily with pictures of exploring cats, often spotted doing something questionable (such as shopping in stores after closing hours, or hiding within people's cars or closets).

Some of the spottings are just of the users' cats when they've dressed up. 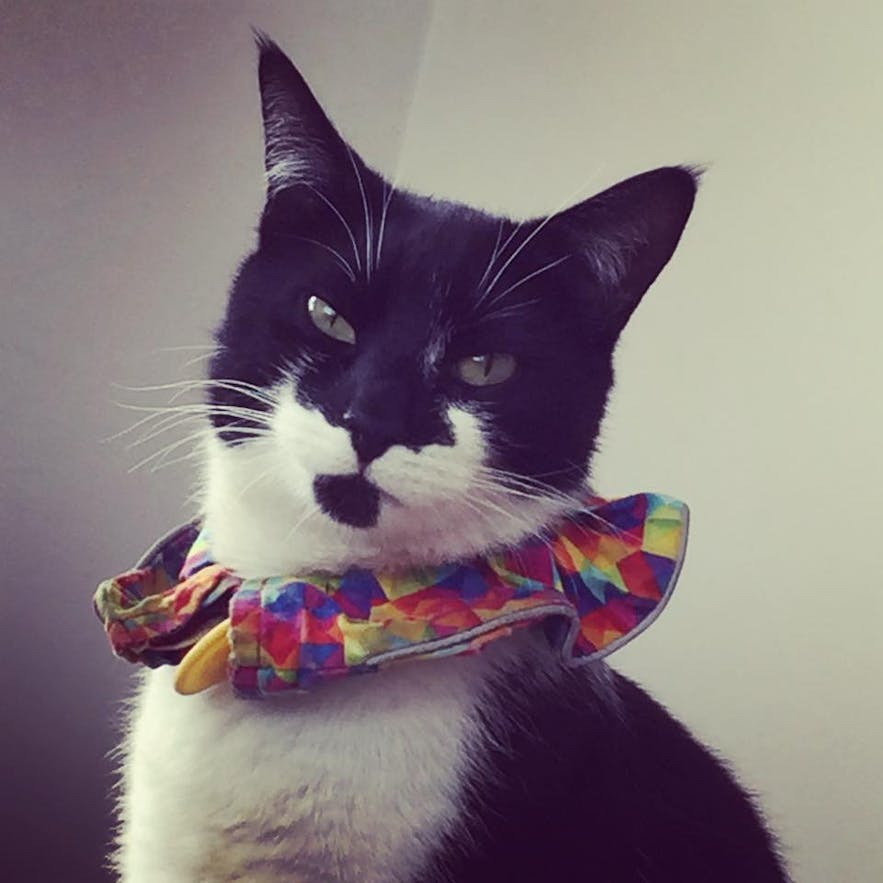 If you want to see some pretty cats of Reykjavík you can also head to ReykjavíkCats on Instagram or check out the #catsofreykjavik - currently with almost 5 thousand pictures. 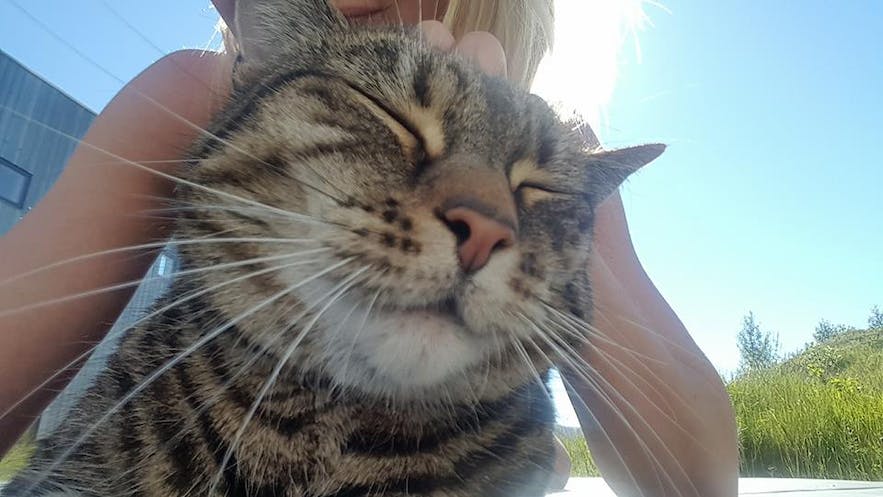 I myself have owned a cat, a pitch black male that had the name Moli. He sadly passed away many years ago and I haven't gotten another one since. My sister keeps the cats in the family however, and has two fur babies, Eyja (short for Eyjafjallajökull) and Reykur, both female. 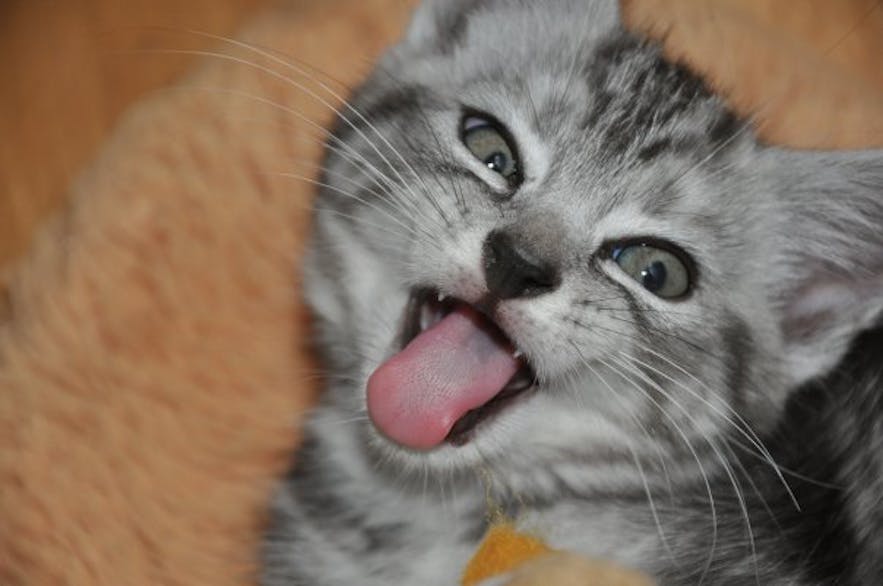 Dreki, the cutest cat ever.

Before Reykur they had Dreki, the most charismatic cat I've ever known, pictured here on the top, and above with his tongue out. Although Dreki can no longer be spotted on the streets of Reykjavík, he'll find newfound fame in images in this post through his insane cuteness!

Reykur at first was thought to be a male, but turned out to be female. But that's ok, we allow all genders and non-genders in our family.

But lets focus on the cats you can meet in person, or watch from the comfort of your own home. 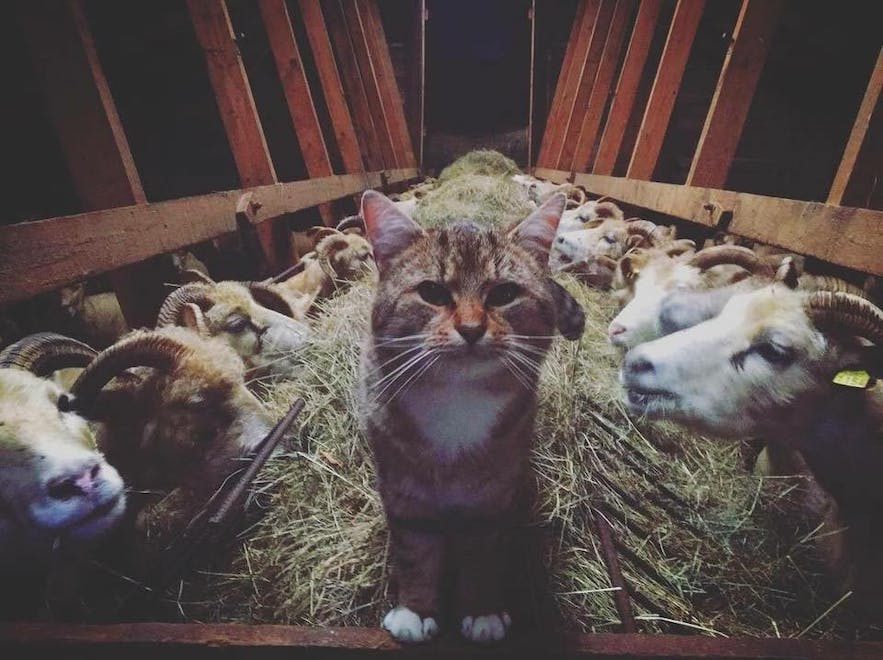 Spaki-Brandur, a farmer's cat in charge. Photo with permission from Spottaði Kött

Cats have been around in Iceland for centuries, or since Iceland was settled in 870. The Icelandic cat is closely related to cats from Skåne in Sweden, the Faroe Islands and theShetland Islands, but much more distantly related to the cat breeds in the rest of the United Kingdom. The cats in Iceland's countryside are more original breed than those in Reykjavík, that have bred with imported species. 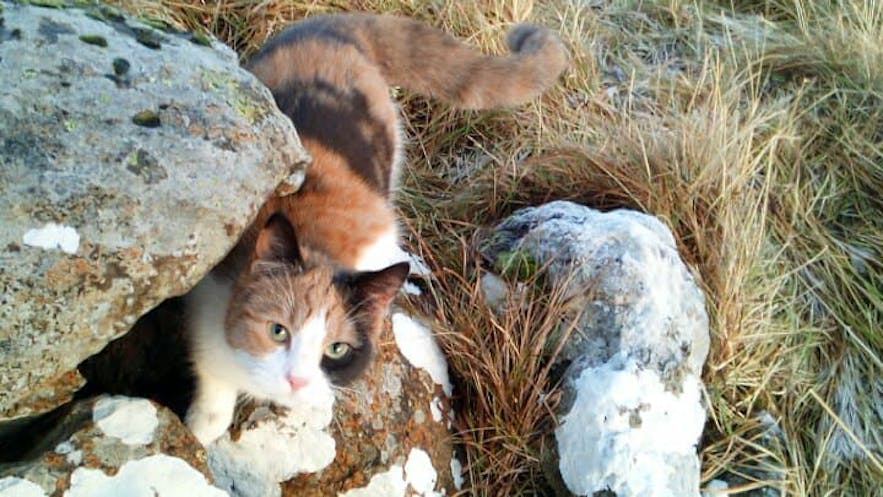 Above you can see typical Icelandic farm cats, Spaki-Brandur and Perla. Both have 3 different colours, white, black, and yellow/red. They love to hunt, and are popular household pets for hunting mice. 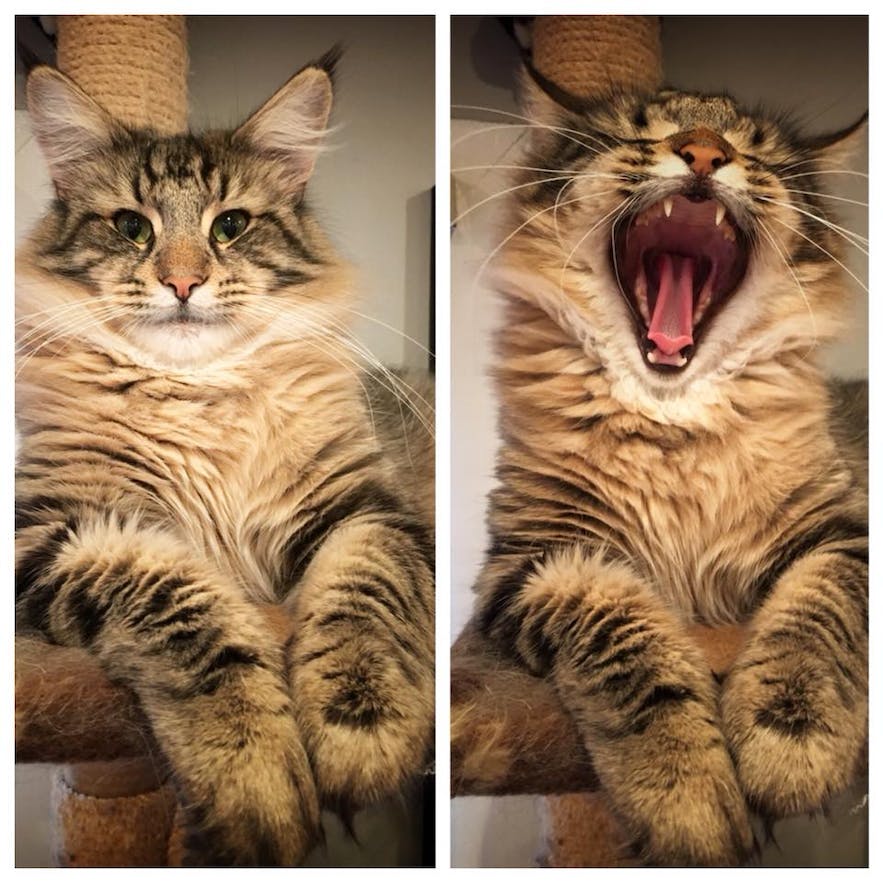 But cats in Iceland come in all colours and sizes. There are all sorts of different breeds of cats in Iceland, including Norwegian Forest cats, Bengal cats, British short hair, Siamese, Ragdoll, Himalayan or Siberian cats to name just a few. 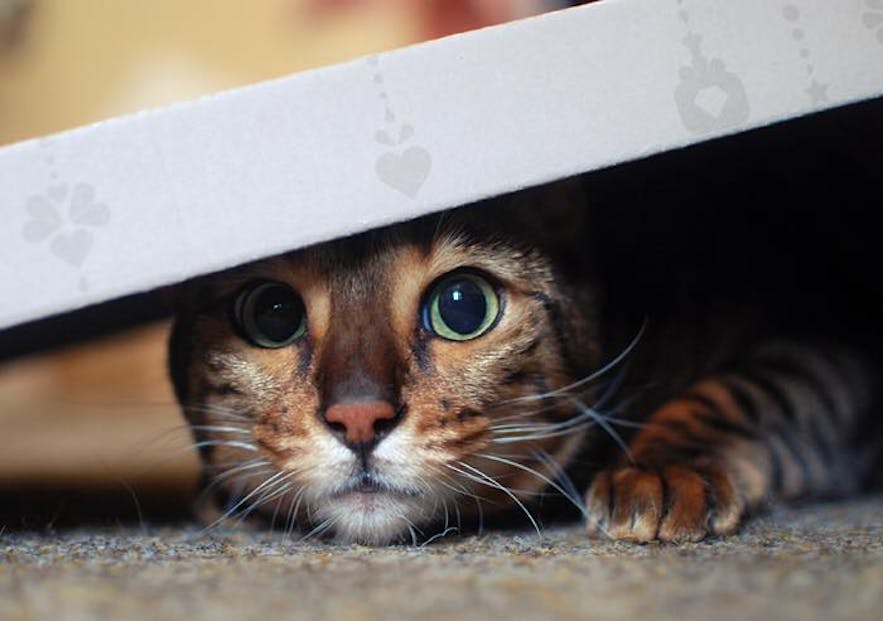 When importing a cat to Iceland, you will need to quarantine it for 4 weeks on arrival. Find information about importing your cats (or other animals) to Iceland here.

Most Famous Cat in Iceland

Without a doubt, the most famous cat in Iceland is the Christmas Cat, or Jólakötturinn. This cat is owned by the parents of Iceland's 13 santa clauses, Grýla and Leppalúði. The parents, the mother especially, likes eating naughty children. Like them, the cat likes to feast on human flesh, but doesn't discriminate against people's age. No matter how old you are, you're never safe from Iceland's Christmas Cat.

Above you can listen to one of Iceland's most famous and loved Christmas songs, about this feared Christmas Cat. 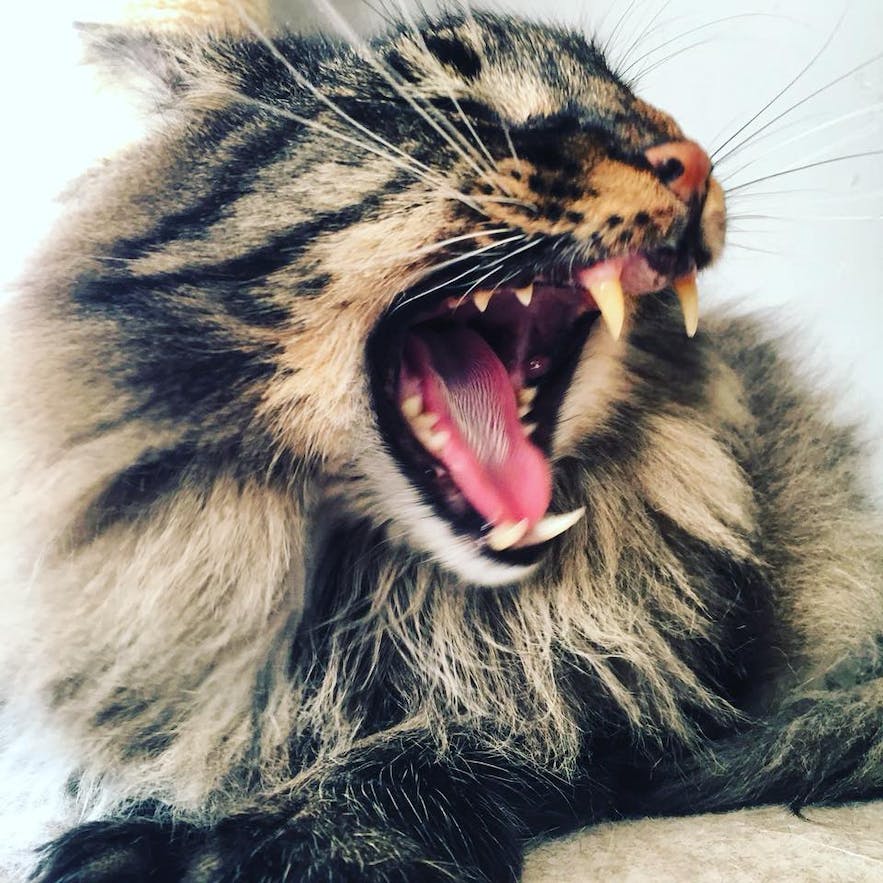 This is Skuggi, perhaps a distant relative to the Christmas Cat judging from those teeth!

However, in order not to be eaten by the Icelandic Christmas Cat all you really need is to get some new item of clothing before Christmas, even if it's just one pair of socks, or even just one sock!

For some reason, Iceland's Christmas Cat only eats people that haven't had any new clothes recently. If someone's given you an item of clothing, all you will get is some hissing from the Christmas Cat if your paths cross.

Keeping Up With the Kattarshians

Speaking about famous cats - There's also the immensely popular reality TV show called Keeping Up With the Kattarshians (or Catarshians) in Iceland.

Besides the live feed from their little cat house, where 4-5 kittens at a time live, eat, sleep and play with each other, Keeping Up With the Kattarshians also has a facebook page, with more than 30 thousand followers. They reached that number just within one year - since the program only started in February 2017!

I bet that 2018 will bring even more fame to these adorable kitties - Watch out Kardashians, these kitties will soon take over the world! 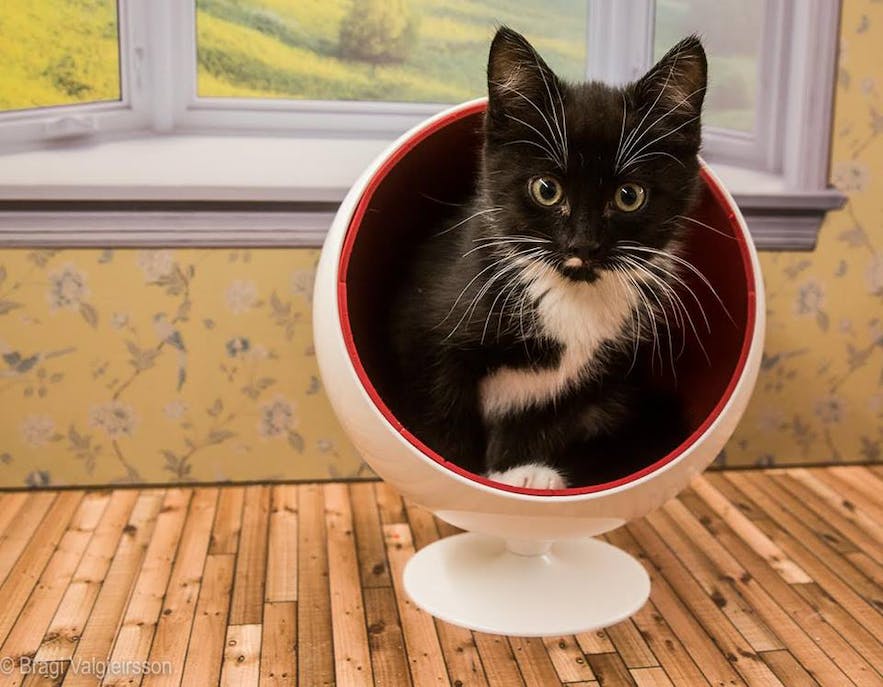 Bubbi found a new home after starring in Keeping Up With the Kattarshians. Photo by Bragi Valgeirsson.

The concept of the show is that kittens without a home come from a cat shelter, Kattholt, and spend their first few weeks in this custom made dollhouse, where multiple cameras live stream them through the Kattarshian channel. Like Big Brother, they all share a house and people get to watch all of their antics.

All of them are up for adoption. 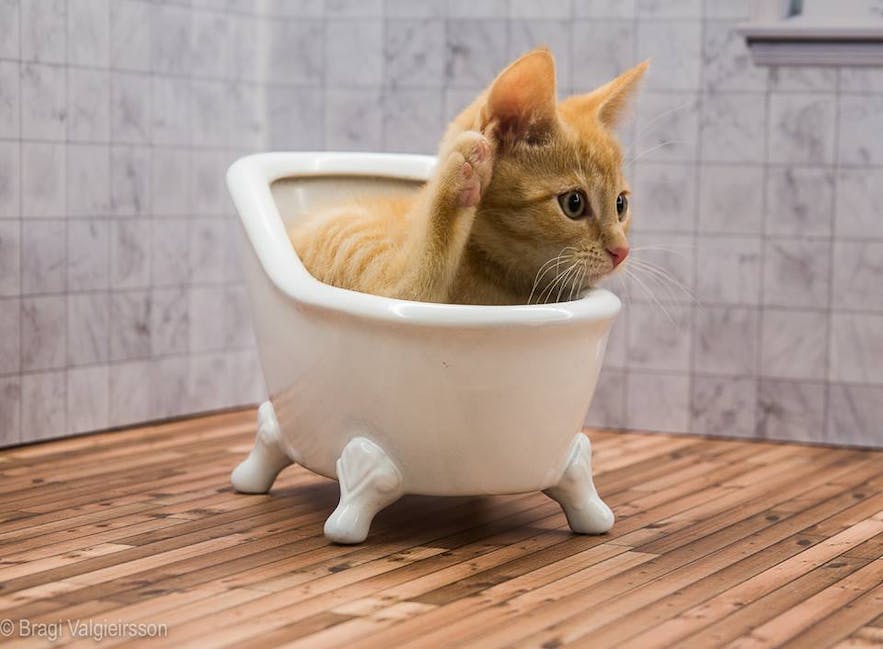 Vigdís also found a new home after starring in Keeping Up With the Kattarshians. Photo by Bragi Valgeirsson.

The first four kittens; Guðni, Ronja, Bríet and Stubbur, have all been adopted - and so have the second and third batch of inhabitants of the house. Additionally, older cats have also found new homes through the show, such as the immensely popular mother of one litter, Vanilla - you can check out her pictures with her new family on instagram under #vanillakattarshian.

The program is made in collaboration with the Icelandic Cat Protection Society, and with approval from The Icelandic Food and Veterinary Authority and the District Veterinary Office in Southwest Iceland.

The program is very popular, all over the world, and people from all over have become huge fans of many of the cats that have been in the house. 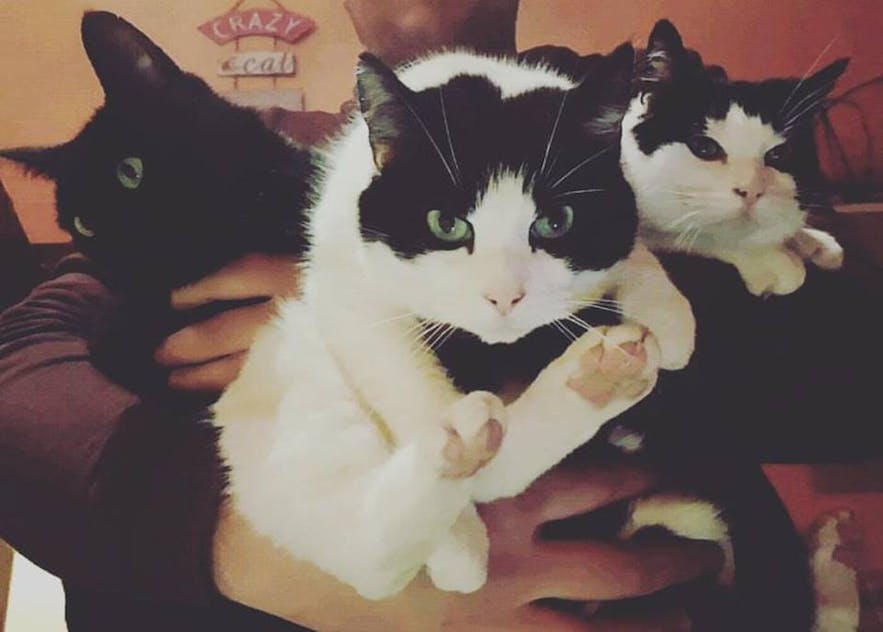 Depill, Coco and Tsuki have a loving home in Reykjavík, photo with permission from Spottaði Kött

With all these cats in Reykjavík, it makes sense to have a cat café in town! With new laws in Iceland, where animals are allowed within restaurants, this has finally become a reality.

Iceland's first cat café opened at Bergstaðastræti 10a in central Reykjavík on the 1st of March 2018. All its cat inhabitants are up for adoption. The name of the café is simply Kattakaffihúsið - or, The Cat Café. 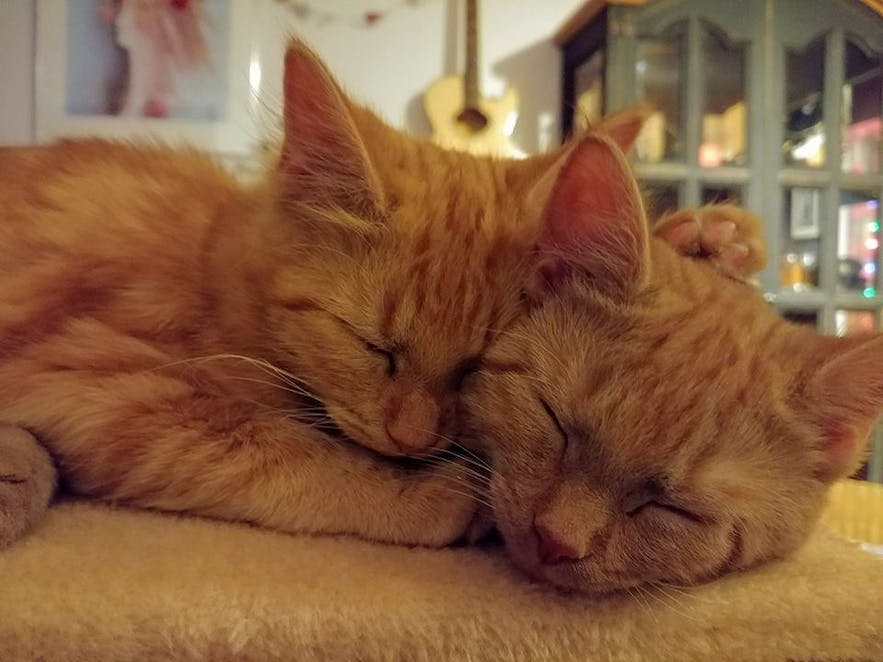 Lóa and Lísa got a second chance of life through Villikettir cat shelter. Photo with permission from Spottaði Kött.

The cats come from the cat shelter Villikettir, and in the café customers are able to get to know the cats in a comfortable and cosy setting, enjoying some vegan or vegetarian food and cake slices at the same time.

And if you happen to be visiting Reykjavík in July 2018, you might catch the Cat Walk at the Reykjavík Fringe Festival, that takes place on the 3rd and 5th of July, starting in front of the Cat Café at 6pm.

If you're not only a fan of Iceland's cats but all animals, be sure to read up on the Icelandic horse, the Arctic Fox, birdlife in Iceland or seals in Iceland. Or you can always go horse riding, dog sledding or whale watching!

Post pictures of your favourite Icelandic cat in comments!