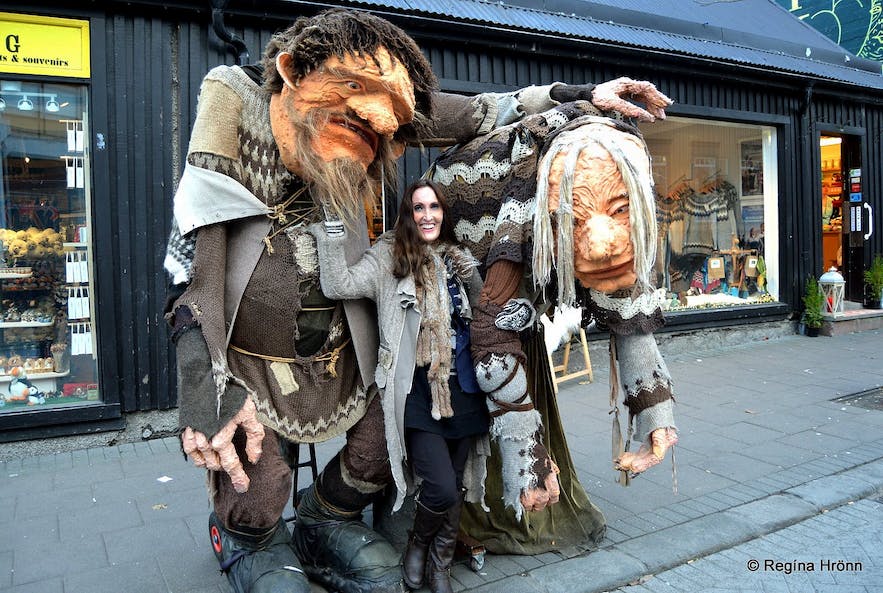 I have written a previous travel-blog on the mischievous Icelandic Yule Lads. Now I am going to tell you about their parents - the cannibal trolls Grýla and Leppalúði. You might have noticed them in Akureyri if you have travelled up north to the capital city of North-Iceland. They used to be located in Reykjavík as well.

You can see what Grýla and Leppalúði in Akureyri look like in my photo below. Grýla is a very bad and grim ogre, and she eats badly behaved children, she comes to pick them up, puts them in her sack and then cooks them in her cauldron. I remember how scared we Icelandic kids were of this terrible troll, Grýla - and she still gives me the creeps!

I shot the video below in 2018 - this is how Grýla is depicted on the Reykjavík City Hall - she is carrying a bagful of naughty children.

Both of them were trolls, and the name Grýla is amongst the names of females trolls in Snorra-Edda by Snorri Sturluson, Iceland's greatest Saga writer.

The photo below of Grýla is taken inside her cave in the Christmas House in Eyjafjörður in North-Iceland. I put my camera through an opening in the cave and got quite startled when I saw the photos! Grýla and Leppalúði were cannibals like other trolls and mostly prayed on children, but didn't mind eating fully-grown men as well. Badly behaved children were scared by Grýla when they were growing up. The word grýla is used in Sturlunga Saga (a collection of Icelandic Sagas) about a giantess or an ogress which causes terror and danger.

The photo below of Grýla is taken at Fossatún in West-Iceland. You can climb into her cauldron - if you dare! If you are a guest at Fossatún you will be able to visit the Troll garden, where several trolls can be found. According to Sturlunga Saga then Grýla had fifteen tails. An old poem about Grýla describes her as having fifteen tails and on each tail, she had a hundred balloons and every balloon contained twenty children!

Other descriptions of Grýla say that she had 300 heads and 3 eyes on each head. She kidnaps the children and she and her husband, Leppalúði, put them in a large sack. Another account says that she has bad nails on each finger, eyes in the back of her head and horns like a goat, the ears dangle down to her shoulders and are fastened to her nose. Her chin is bearded and her teeth are like charcoal!

So you can see from the accounts that she is quite ugly and scary looking! 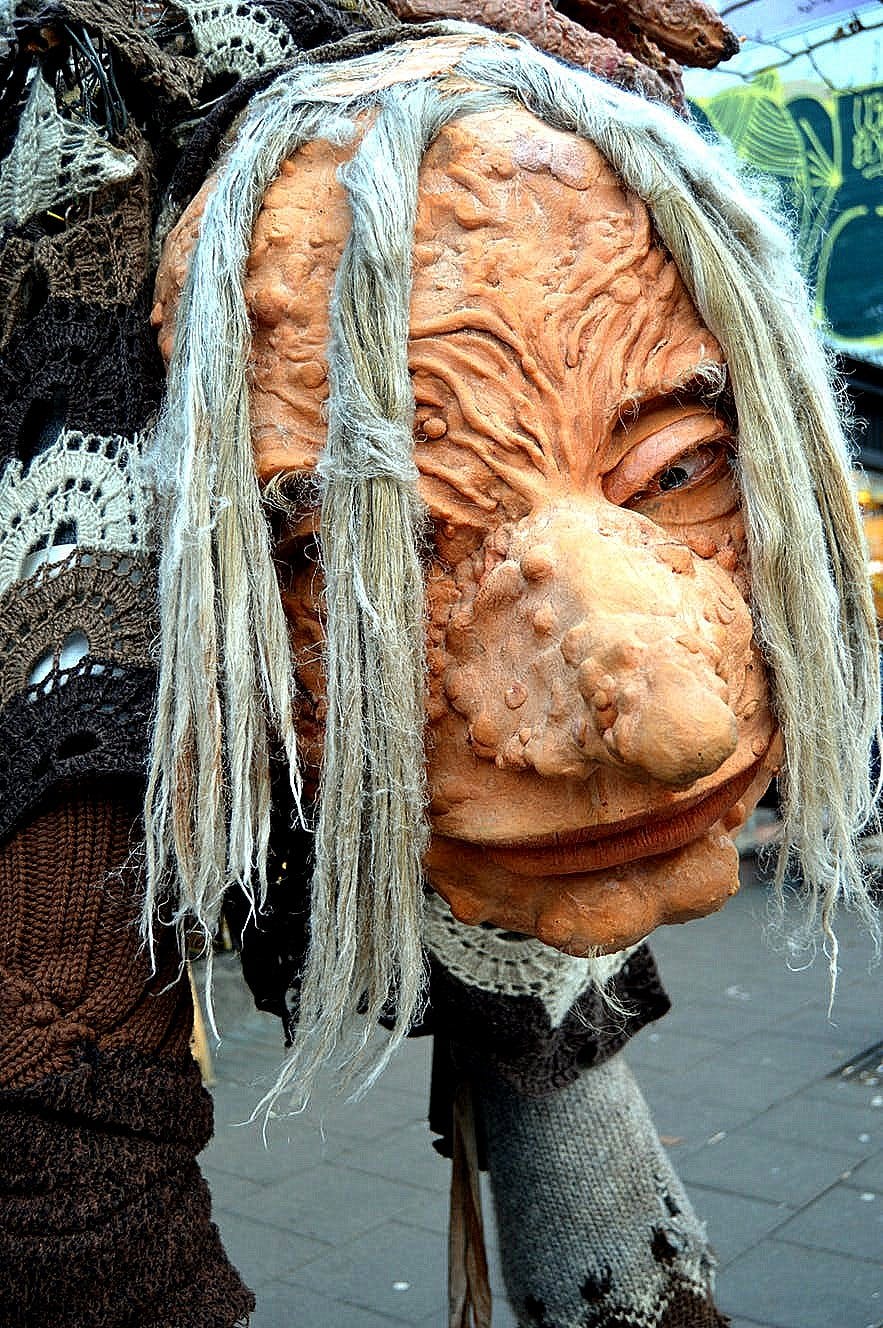 Grýla's husband is the troll Leppalúði. Although he is a troll he is not as ugly as Grýla - or is he? They are the parents of twenty children apart from the Yule Lads, which are considered to be 13. And according to the Folklore of Jón Árnason there exists a poem describing yet another 19 of Grýla's children. And Leppalúði had a son out of wedlock called Skröggur.

Leppalúði had that son by a girl who nursed Grýla, while she was ill and bedridden for a whole year. Leppalúði couldn't take care of Grýla and their big household, so he hired this girl called Lúpa. When Grýla got better from her illness she was furious to find out that Leppalúði had a child by Lúpa and drove Lúpa and Skröggur away. 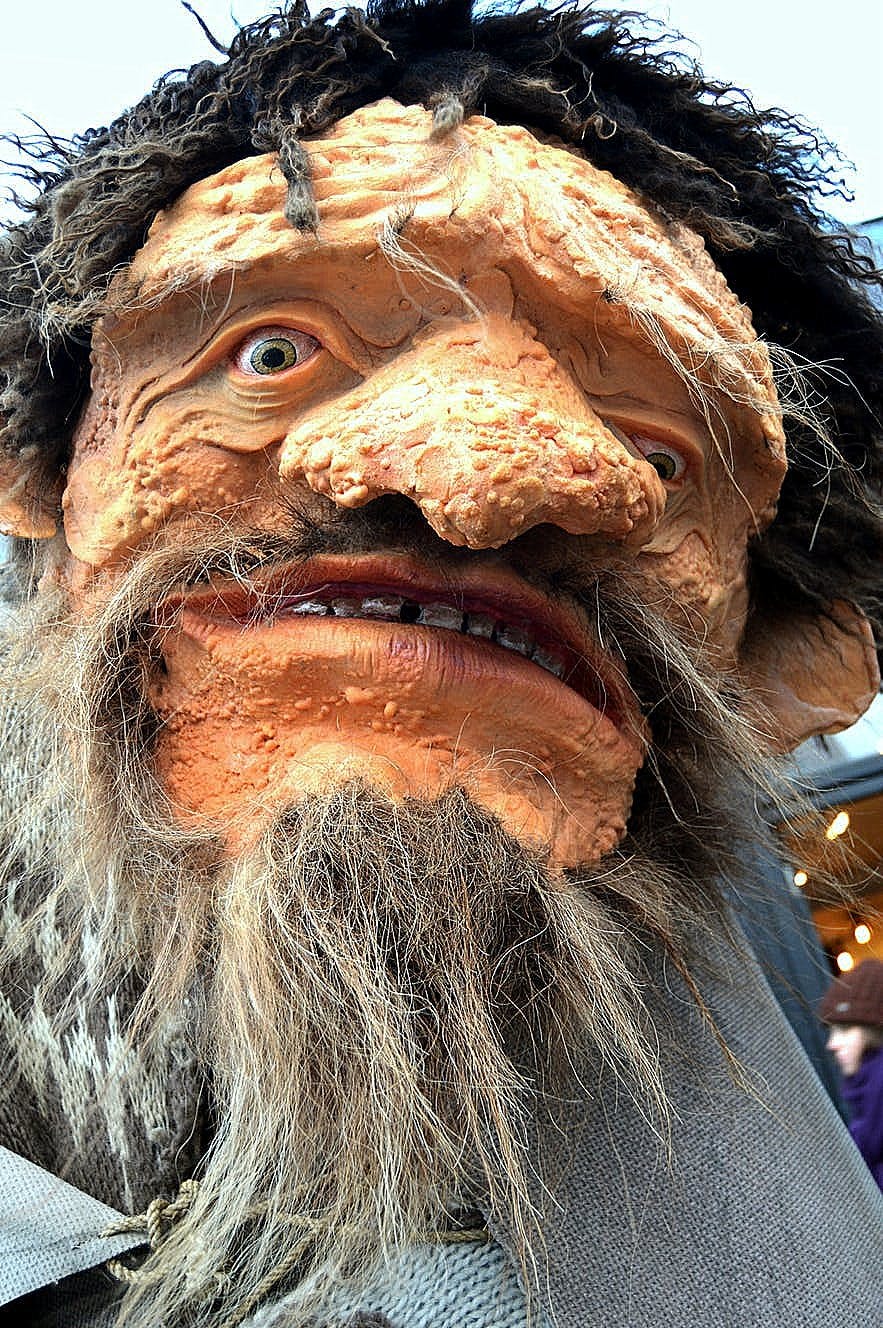 Grýla had been married before she met Leppalúði. Her first husband's name was Boli. They had a lot of children. Boli was also a cannibal like Leppalúði. Boli died of old age and after his death Grýla found Leppalúði.

Grýla wasn't old, even though she had had so many children, as one account in the Folklore of Jón Árnason tells of Grýla and Leppalúði having twenty children together and that Grýla was 50 years old when she had the last children, twins, by Leppalúði. The twins died while they were still in the crib. 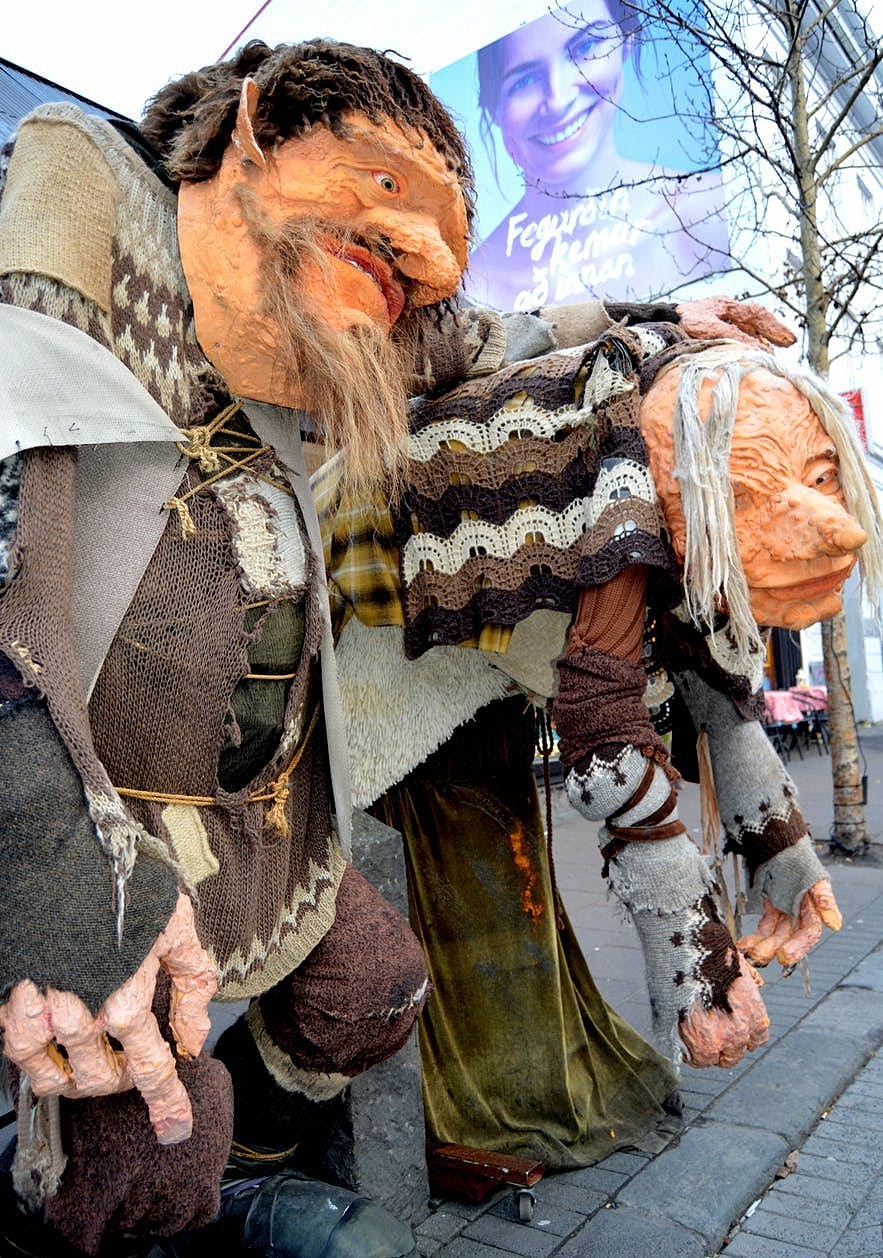 You were able to meet Grýla and Leppalúði in Reykjavík's centre. They used to be located in Bankastræti street, then they were moved up to Skólavörðustígur street, but I haven't seen them for a while.

There is a funny coincidence I noticed when taking these photos downtown. The ad from the Blue lagoon above Grýla's and Leppalúði's head says: "Fegurðin kemur að innan" or "Beauty comes from within" - I don't think they referring to the terrible trolls Grýla and Leppalúði... ;) 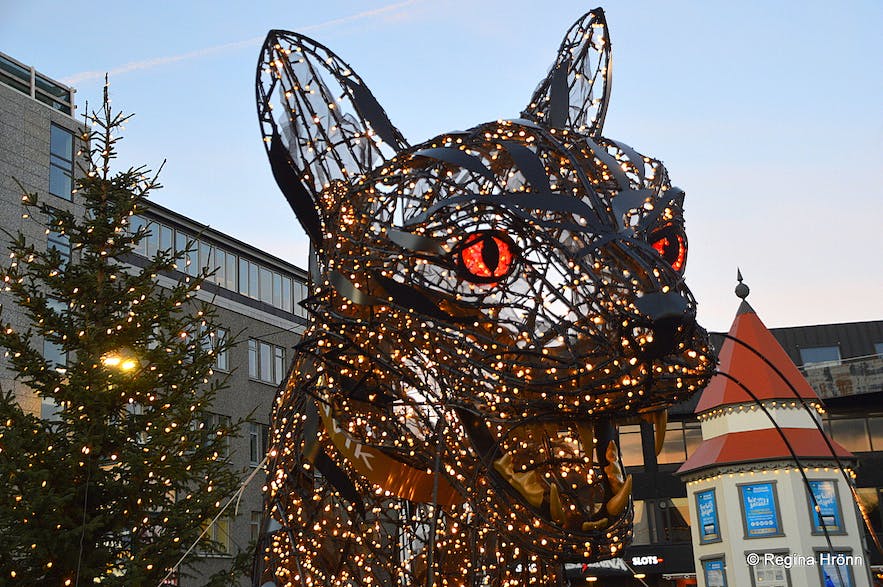 You can see this big Christmas Cat tied down on Lækjartorg square around Christmas time in Reykjavík. The cat is a new addition to our Christmas decorations - it is huge, 5 metres tall and 4 metres wide and glows in the dark as some 6,500 led lights make it sparkle. 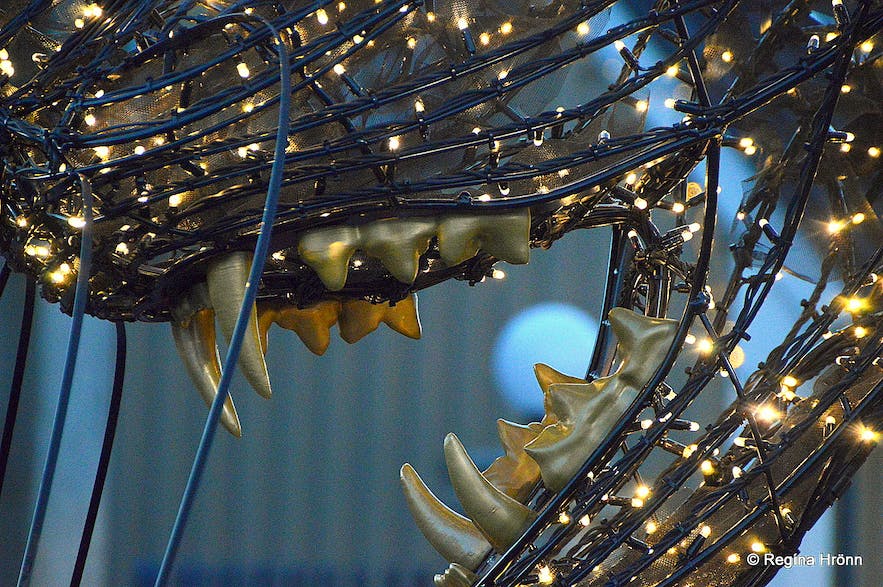 The Christmas Cat in Reykjavík

The offspring of these terrible trolls are the Yule Lads and they are described as being very mischievous and ill-mannered. And who wouldn't be after being raised by two frightening trolls like Grýla and Leppalúði? The Yule Lads in Akureyri - the Capital of the North

I think the Yule Lads are softening over the years and they are nice to well-behaved children and give them presents in their shoe the last 13 days before Christmas. And children very much look forward to the arrival of the Yule Lads and put their shoe in the windowsill by their bed and wake up very excited and look for the present in their shoe.

You can meet the Yule Lads below at Christmas time at Árbæjarsafnið Open Air Museum in Reykjavík. The Yule Lads at Árbæjarsafn museum

In December each year, you can meet the Yule Lads at their home in Dimmuborgir in North-Iceland, where they live in Jólasveinahellirinn - the Cave of the Yule Lads.

The Yule Lads greet visitors from 11:00-13:00 from November 30th until December 24th. You can buy tickets and find out the exact dates and times here on Guide to Iceland.

I have written a special travel-blog about the Yule Lads at Dimmuborgir if you want to see what their cave looks like. The information sign at Dimmuborgir depicting the Yule Lads

The Icelandic Yule Lads are of course also included in the guided tour Icelandic Mythical Walk | Trolls, Elves & Hidden People which you can join in Reykjavík.

The guide will also tell you all about the mythical beings of Iceland; f.ex. the elves and trolls, the Icelandic zombies and Iceland's Loch Ness. I checked out this tour and can recommend it. 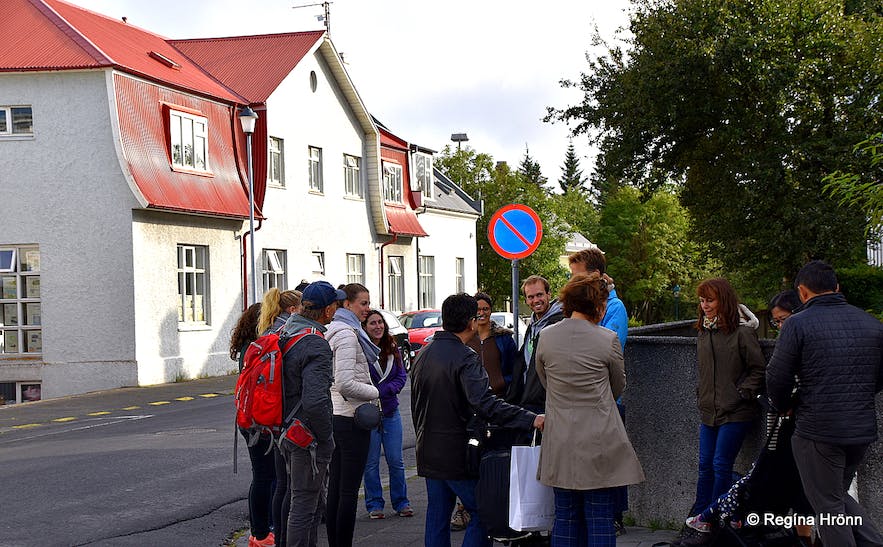 The Reykjavík guide telling us about the mythical beings of Iceland, amongst them the Yule Lads

Once in Reykjavík check out the most popular day-tours available from the city to make the most out of your Iceland trip. Don't miss seeing:

And if you are staying here for New Year's Eve then I have written another blog on what we locals do here during the holidays.