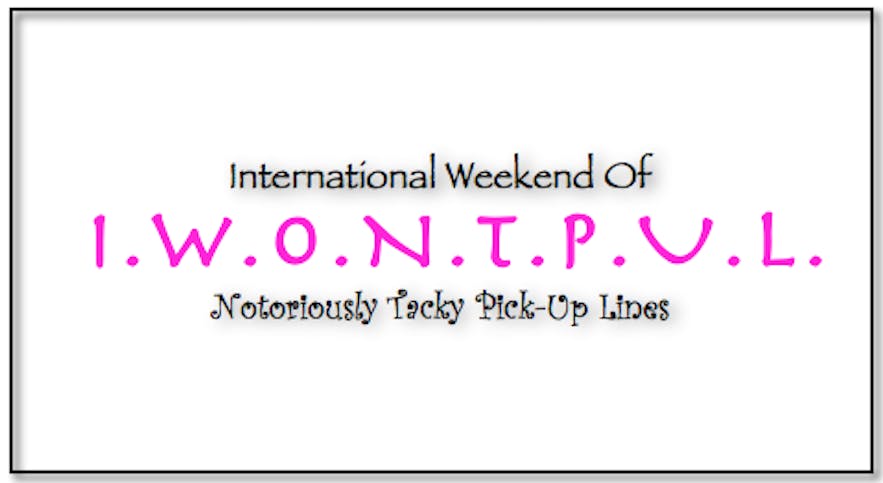 This year marks the 6 year anniversary of an international festival that started in Iceland. A festival that thousands of people all over the world have participated in - but nonetheless nobody really knows anything about it. The International Weekend Of Notoriously Tacky Pick-Up Lines starts today and lasts until Monday the 20th of May.

Previously known as IWOBPUL - The International Weekend Of Bad Pick-Up Lines, the year 2013 saw a name change to celebrate the 6th anniversary - with a more appropriate abbreviation.

The festival has only been known to people through Facebook and word of mouth.

It takes place every WhitSunday weekend, every year, everywhere for everyone.

I have once met a total stranger that told ME about this weekend, which was very amusing seeing as I started it myself.

It was created in 2008 when a few girls in Reykjavík (myself included) had a Friday night out during Whit-Sunday weekend (a bank holiday weekend in Iceland) and the topic of pick-up lines came up.

Who uses them? Why? What are the worst lines you've heard? What is the worst line that has been used on you? Have you ever used one yourself?

Personally, the worst line that has been used on me was by a middle aged man that came up to me in the early afternoon in a botanical garden in Brazil, on a Wednesday when I was about 22 years old and he said: 'When God created you, he made you walk through the queue of beauty twice.' Cheese&CringeFest. Note to self: Cheese generally doesn't work on Icelanders. It also doesn't help if you're twice the age of the person you're saying it to.

That Friday night in 2008, after a lot of laughs and a few drinks we all decided to go downtown and use the lamest lines we could think of on the guys we would meet. The aim was not to pick someone up (although if you were single and happened to do so, that was not a problem!) - but just to have a laugh.

And lo and behold, an incredible amount of fun conversations and new friendships were established (and possibly some phone numbers exchanged)... Although one Icelandic guy actively avoided me for months after since I saw him all 3 nights and used variations of 'robbery' lines on him. I never knew his name so I just called him 'The Thief' in my mind. (Thief! Thief! You stole my heart! - Your father must be a thief, because he has stolen the stars and put them in your eyes)... Just goes to show we clearly don't share the same kind of humour.

The following day it was decided to repeat using bad lines for the Saturday and Sunday nights as well. Yours truly even made a facebook event, naming it (in short) IWOBPUL. And a couple of friends in the UK and in Australia took part - so indeed it was international. That marked the start of this annual, relatively unknown 'festival'.

2012 had a lull year and only about 100 people signed up for the Facebook event.

2013 so far only has a handful of people that have signed up on Facebook, which is a shame because I personally believe this should be as known a 'festival' as Valentine's Day.

So I urge you to sign up for IWONTPUL 2013 and share the event with anyone you think could do with a bit of fun this weekend. :)

It's fun, it's silly and it makes you go and chat to random strangers. Most of the times you'll make people laugh (unless you're very creepy when delivering your line!) and can have a fun banter about pick-up lines.

I also think that if people are aware of this weekend then it might help people that are really awkward at first encounters. They could say a bad line but get away with it and possibly meet someone they could possibly date.

But you don't need to be single to use bad lines on people, they work just as well for socializing!

This year, as well as last year, IWONTPUL has the clear advantage of being held the same weekend as Eurovision Song Contest (overload on cheesefest!) so you can listen to tacky Europop whilst trying out your tacky lines. Believe it or not, last year this was such a success for me that I actually got myself a boyfriend through IWONTPUL Eurovision night! And he's still around... ;)

So, in honour of Iceland's cheesy contribution to Eurovision Song Contest this year - with the song "Ég á líf" (I have a life) I will leave you with this line (read with as much cheese-over-the-top-emotion you can muster):