What is Reykjavik Poetry Brothel?

Do you like poetry, theatre, live music, cabaret, burlesque and live arts? Then look up the theatrical and immersive Reykjavík Poetry Brothel, or Rauða skáldahúsið. What is a Poetry Brothel? If you like immersive events and want to get to know the alternative arts scene in Reykjavík, read on.

If you, like me, look out for immersive theatre and art events wherever you travel, then you might be familiar with the concept of a Poetry Brothel.

The history of the Poetry Brothels takes us back to New York city in 2007, when the poets and friends Stephanie Berger and Nicholas Adamski shared a feeling of New York's poetry scene being dry and stiff, and a longing to bring more life to it. 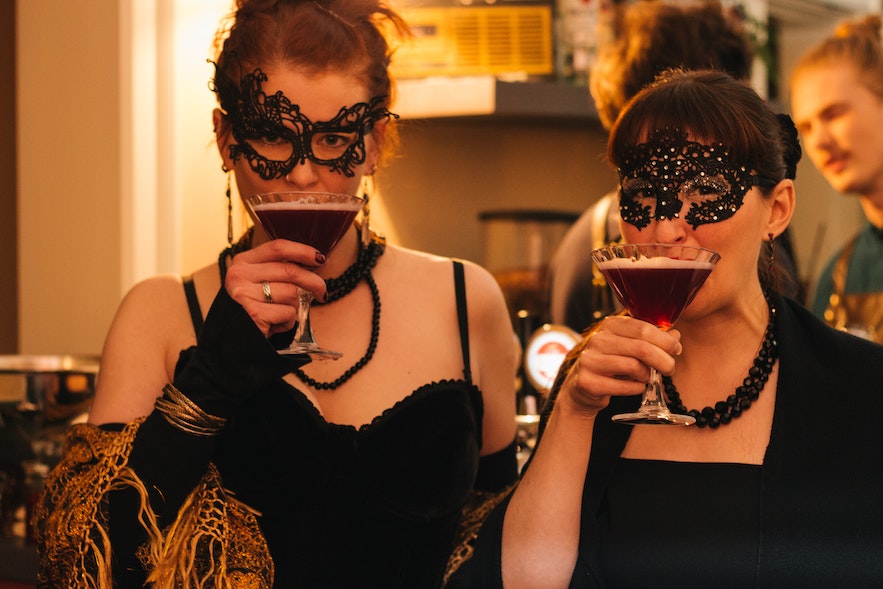 Photo by Kaspars Bekeris, of our front of house sipping a Baudelaire cocktail during  the Masquerade show.

Thus, the Poetry Brothel was born and the first one took place in 2008 in New York City. The word brothel was chosen as audiences are able to pay for a service from the many poets on the night, namely a private reading.

Additionally, the poetry brothels create a bohemian feel where artists, poets and those considered low class entertainers (highly skilled cabaret and burlesque artists) can revel together. 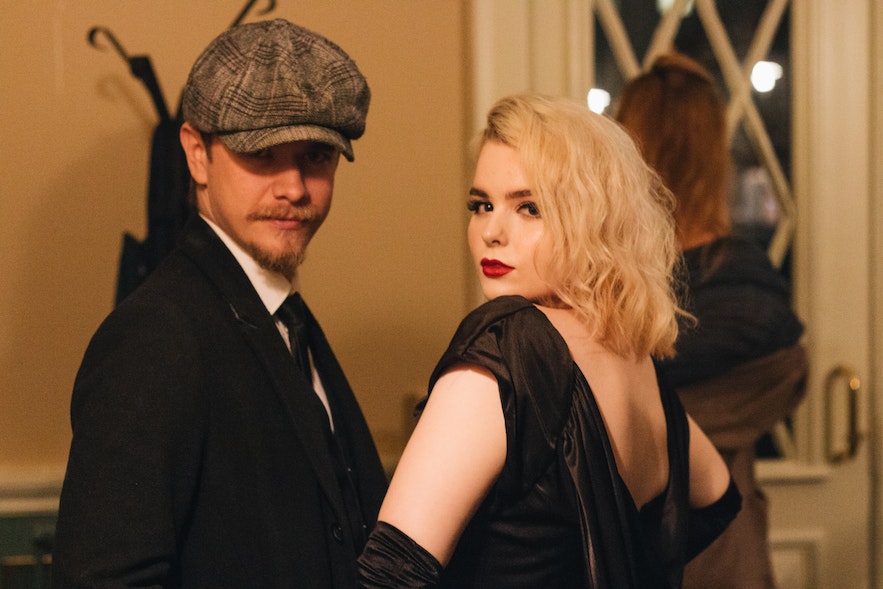 Photo by Kaspars Bekeris of Krissý Krumma in her burlesque character, and an audience member.

Since then branches of the original Poetry Brothel have sprung up all around N-America, Europe and S-America. You can find poetry brothels in various locations, from Portland south to Valparaíso east to Paris and north to, you guessed it, Reykjavík.

And the best thing about it? You don't even need to know Icelandic to enjoy it.

Reykjavík Poetry Brothel is still brand new, only being founded in May 2017. The name for Reykjavík Poetry Brothel in Icelandic is Rauða skáldahúsið, which can either be translated as 'The Red Poet's House' or 'The Red House of Fiction'. Its founder is a poet and translator from New York, Meg Matich, that now resides in Iceland and translates Icelandic poetry into English.

Meg had been a part of the Poetry Brothel scene in New York, and she longed to establish a similar event in Reykjavík. Iceland has long been known for its rich literary culture, and with a blossoming Cabaret and Drag scene in Reykjavík it was the perfect time to establish such nights in Iceland. She had good connections within the world of poetry within Reykjavík, but needed help to put on an event of this size.

Meg contacted Miss Mokki, the mother of Reykjavík Kabarett - the first official cabaret group in Iceland and asked her for help. Miss Mokki, aka Margrét Erla Maack, loved the concept but was too busy to take on the job, so she referred her to the immersive events company Huldufugl, that I co-run.

I have a background in theatre, and have the same longing of bringing new, different, immersive theatrical events to the arts scene in Reykjavík, so I jumped at the opportunity to help put up a night of Poetry Brothel in Reykjavík - and in doing so inadvertently became the Madame of the House.

Little did I know that this one-off event would be so successful and popular, that it has now turned into a year-quarterly event and incorporates around 35 different artists during each performance!

Reykjavík Poetry Brothel also has its own jazz house band, The Keystone Swingers, that was assembled by Páll Ármann for the first event. Rotating guest singers perform with the house band each night, with previous singers being jazz veterans María Magnúsdóttir, Vigga Ásgeirsdóttir and Svanlaug Jóhannsdóttir. 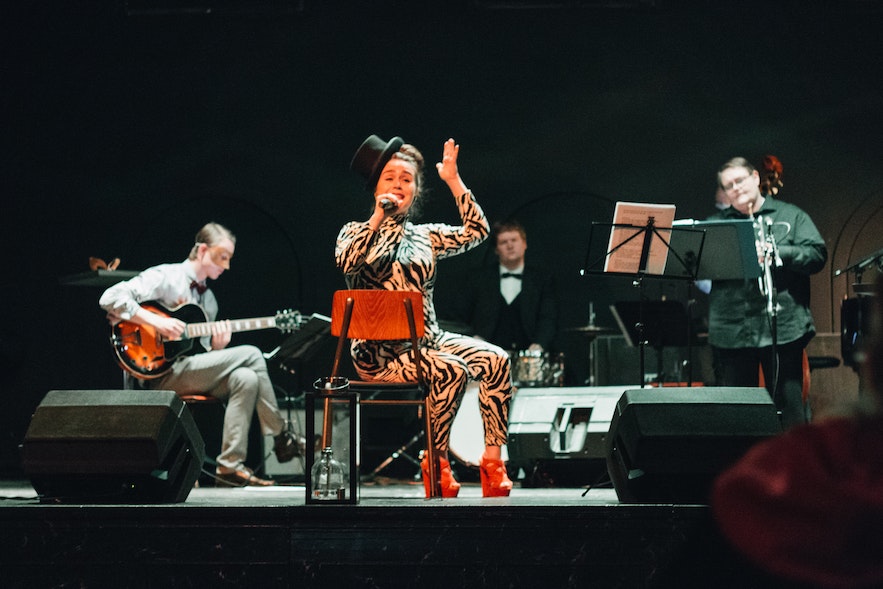 For the second show another band joined the team, Gleðikonurnar, that also has Páll Ármann onboard playing the bass, but they play more lively klezmer polka music. 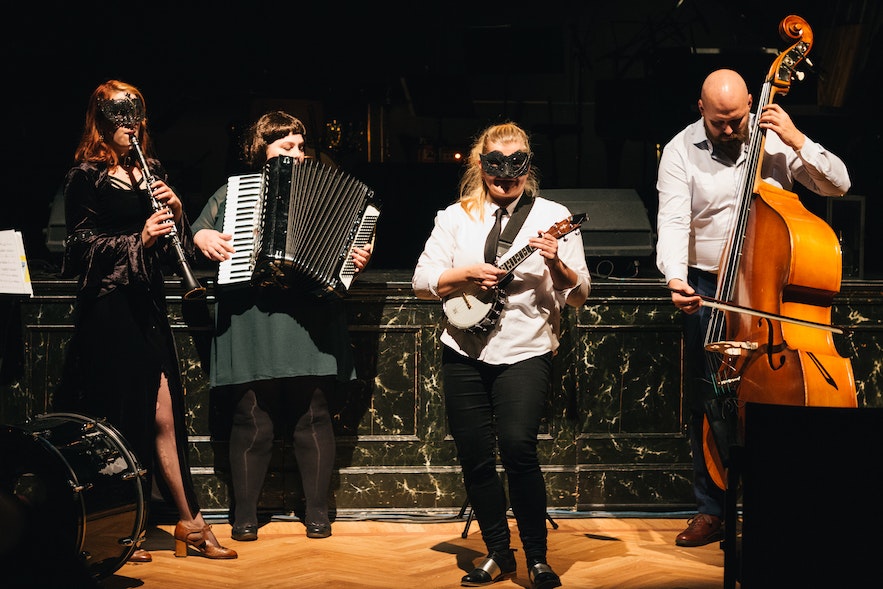 Photo by Kaspars Bekeris, of Gleðikonurnar performing during 2017 Masquerade show.

Rauða skáldahúsið had its first show on May 18th 2017, its second one on July 29th 2017 and its third event on November 10th 2017 in the gorgeous venue IÐNÓ. The venue dates back to 1897 which lends it a perfect design and it is also conveniently located right in the city centre, right next to Reykjavík City Hall where Guide to Iceland's tourist information is.

The fourth and fifth one are planned to take place on the 29th of March and on the 21st of June 2018. 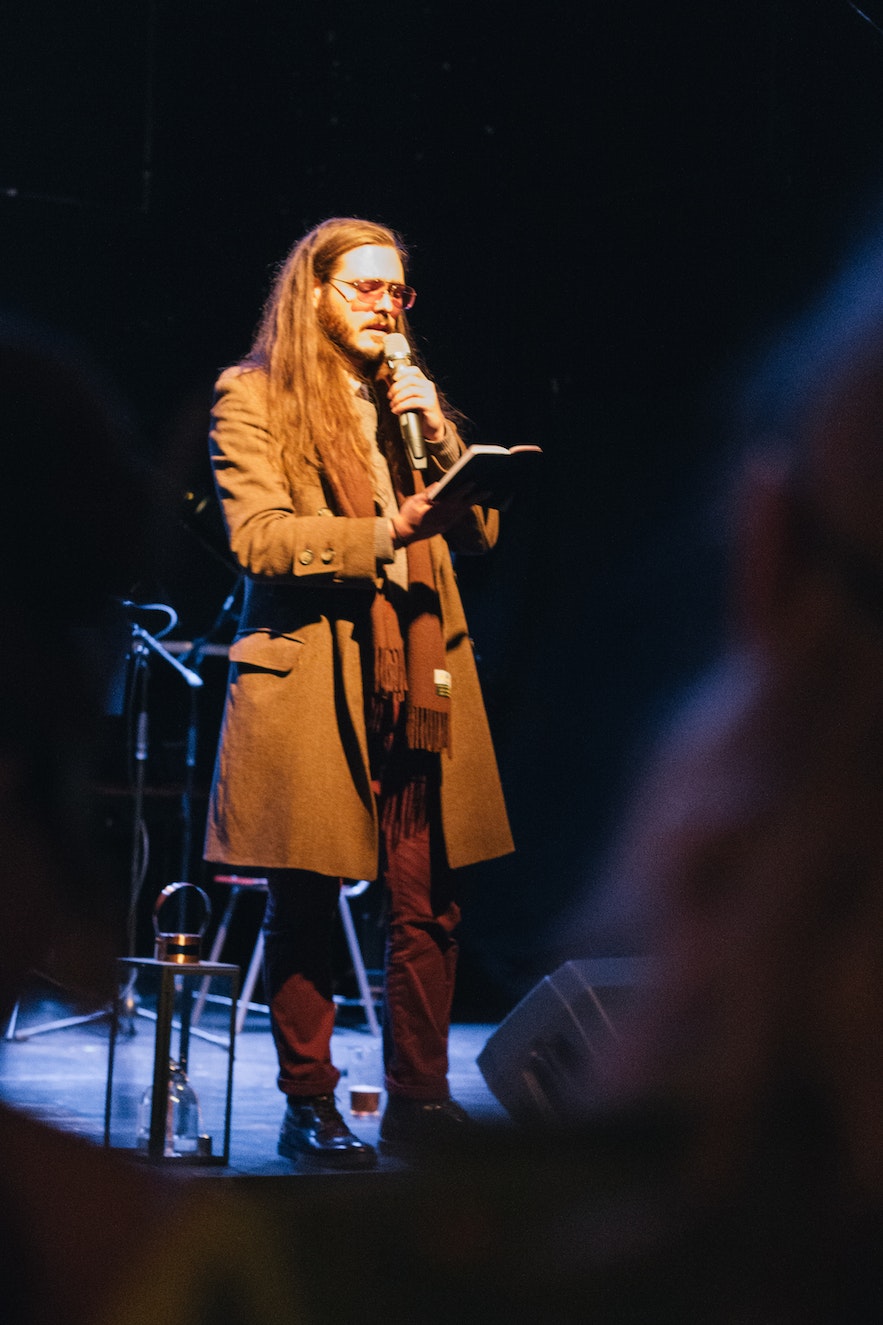 The star poet for the first event was Kristín Ómarsdóttir, for the second one Kristín Eiríksdóttir, for the third one it was Kött Grá Pjé and for the fourth one it will be Nobel Prize literature laureate Sjón (Sigurjón Birgir Sigurðsson).

What is Reykjavik Poetry Brothel?

Reykjavík Poetry Brothel, as well as other poetry brothels around the world, offer its audiences to get to know one of human's oldest art forms in a new and different way: The Spoken Word.

Local and international poets offer audiences private readings, for a small fee, and the set-up of the evening is similar to that of a bordello. You pay an entrance fee, there is a master of ceremonies (the Madame of the House), there is live entertainment (often in the form of burlesque, boylesque or circus acts), there is a house band, a bar and various artists roaming the room trying to sell you their goods. 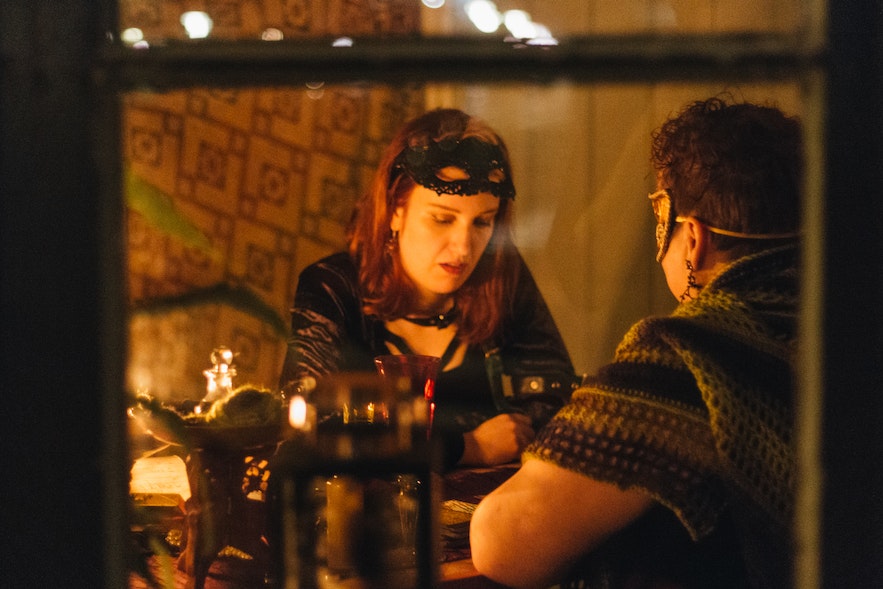 Photo by Kaspars Bekeris, of a Tarot card reading by the resident witch Snæugla.

You might even be 'painted like one of those French girls' by a talented sketch artist, and bring home with you an immortal sketch of yourself.

The whole set-up makes you feel like you've stepped into another world, as all the poets perform under the name of a made up character, and most of those characters are larger than life.

Each night there are around 8-10 poets working the floor, plus an additional star poet of the evening that is honoured specifically. There is a mix of known and unknown poets, local and international ones. With all the visual show, live bands and multiple acts on offer, this is therefore the perfect entertainment for both locals and foreign guests, in small or large groups.

Although the first two events were not themed, the third one had a Masquerade theme, and future events will be themed in various ways.

The March show in 2018 has a theme of the Seven Deadly Sins, and the June edition is themed around Midsummer's Night Dream. This theme shows both in the style of the performers, but the audiences are also encouraged to dress up and explore their creativity.

I know, you don't normally tip in Iceland. But at the fringe entertainment sector it's a little bit different. The drag queens and kings at Drag-Súgur work for tips, so do the artists within Reykjavík's Poetry Brothel.

This is a large production, with around 35 performers. That includes two bands, 4-5 cabaret performers, just under a dozen of poets, a resident witch, sketch artists and roaming circus performers. Plus of course the sound designer and technician, the front of house, the stage kittens and the Madame herself (me).

Tipping is made easy by the sale of poker chips. Each poker chip costs 750 ISK, but you can get an offer of 3 chips for 2000 ISK. Each private reading will cost you one chip, except if the star poet decides to give private readings - those are double price.

You can also pay for a tarot reading, with 1, 2 or 3 chips depending on how long of a reading you want. There are several artists in the house that will give you something private, such as a private song, or a drawn sketch or body painting and guests are encouraged to tip those artists as well.

The entrance fee for the whole evening is kept at a minimum, and is only 3000 ISK for the whole night - making it one of the most affordable theatre shows in Reykjavík! And if you so wish, you don't need to tip anyone and can simply enjoy the live music, acts on stage and the spontaneous outbursts of poetry here and there.

Who Attends the Poetry Brothel?

Reykjavík Poetry Brothel is open to anyone over the age of 20 (legal drinking age in Iceland). People from all sorts of backgrounds, with different nationalities, locals and foreigners attend the event. This suits anyone that is interested in arts, poetry, circus, cabaret, live music and theatre.

The event itself tries to be as inclusive as possible, featuring artists of all genders, sexualities and ethnicities, resulting in poetry performed in various languages and with an array of topics. 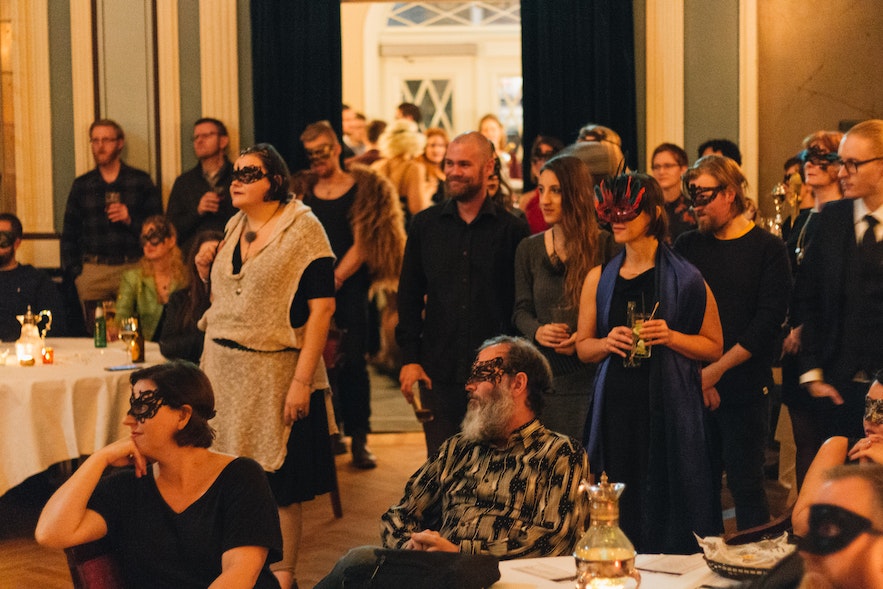 Previous performances have included poetry in Icelandic, English, Spanish, French and even Latin.

Having a one-on-one reading can be an intimate or intense experience. In Stephanie Berger's words: “Both poetry and sex feed the human need for intimacy, fantasy, desire, violence, and freedom.”

And although people are at first a little shy to get private readings, by the end of the night the audience will be fighting over some private time with the poets.

I often need to explain the idea of Rauða skáldahúsið to people that are unfamiliar with it, and especially to those that have qualms about the word 'brothel' (that isn't used in the Icelandic name).

So I'll just put it here once and for all: In no way does this event condone prostitution, nor does it want to romanticise the idea of prostitution. We do however support the rights of sex workers.

The word 'brothel' simply implies that monetary exchange will take place, something that poets have been lacking for years - and the setting of the night is perhaps a little risqué, for some.

I will leave you with an excerpt of Charles Baudelaire's poem 'Be Drunk' - wise words that we strive to live by:

"You have to be always drunk. That’s all there is to it—it’s the only way. So as not to feel the horrible burden of time that breaks your back and bends you to the earth, you have to be continually drunk.

But on what? Wine, poetry or virtue, as you wish. But be drunk." 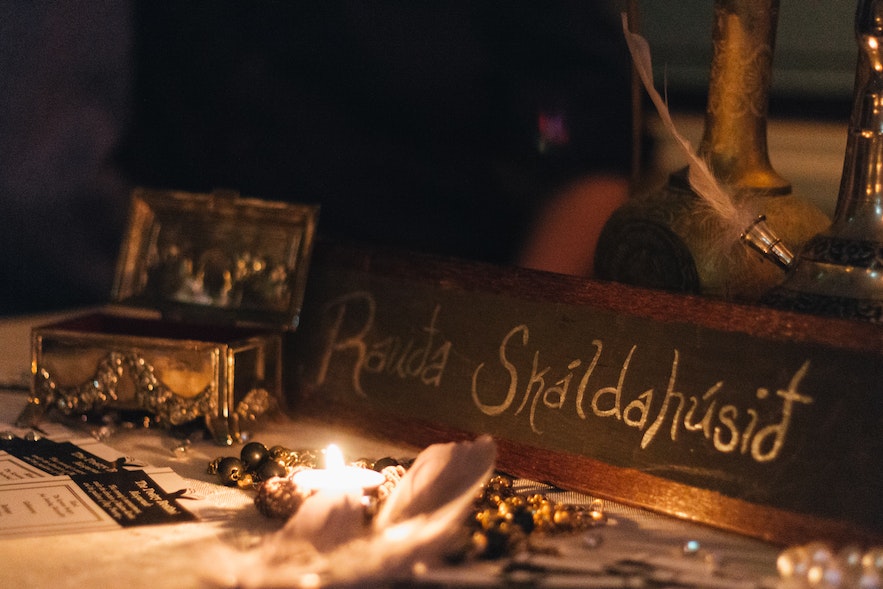