I'm a self-proclaimed massive foodie, and I love food from all corners of the world, both haute cuisine and more informal restaurants. But there's something about street food that's especially exciting. Maybe it's because you have so many chefs and small restaurants packed together in one place; maybe it's the fact that each   venue is focused on one thing and they do that one thing really well. Maybe it's the mix of scents in the air, or the lively atmosphere, (street food markets tend to be informal and attract a cross-section of society).

And of course, street food markets tend to be on the cheaper side, which is always a bonus!

So let's dig into the Icelandic street food scene, and get to know about the best places to look for street food in the young but vibrant city of Reykjavík.

The Street Food Scene in Reykjavík 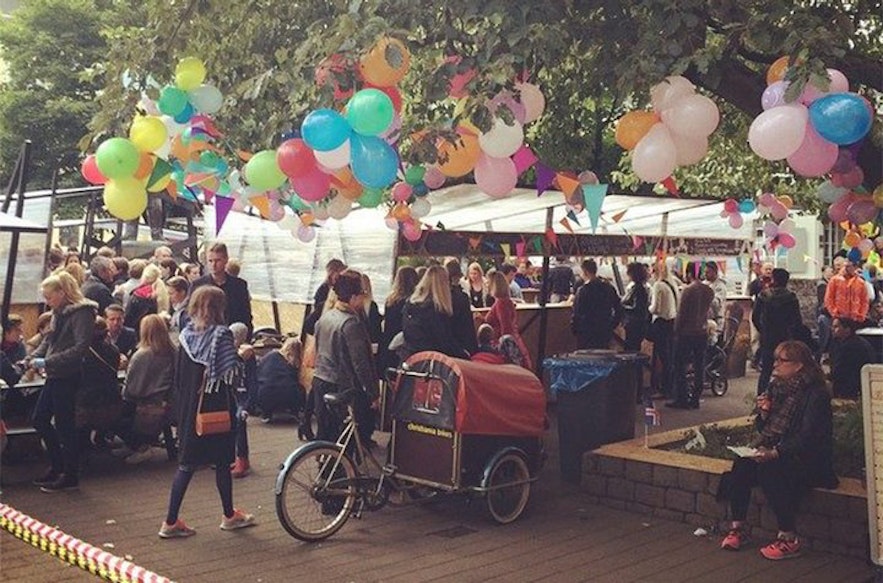 In the past there hasn't been much going on regarding street food in Reykjavík. The country's weather is cold and unpredictable, and throughout winter it wouldn't make much sense to keep a food truck going daily. There have always just been a handful of street food trucks found in the centre of the city on Friday and Saturday nights to cater to those out on the town, offering greasy sandwiches or Belgian waffles lathered in chocolate.

However, in recent years there's been a big change concerning Iceland's street food culture. Small street food markets have been popping up during summertime, and sometimes even a couple in mid-winter, in December leading up to Christmas.

Street food would therefore mainly be available during summertime, when most people are out and about and the weather isn't (as much of) a hindrance when it comes to eating outside.

From 2014-2016 the first public food market arrived on Reykjavík's scene, Krás food market, that was only open on weekends in specific months of the summertime. Unfortunately, that food market no longer exists, but was the starting point of what was to come. 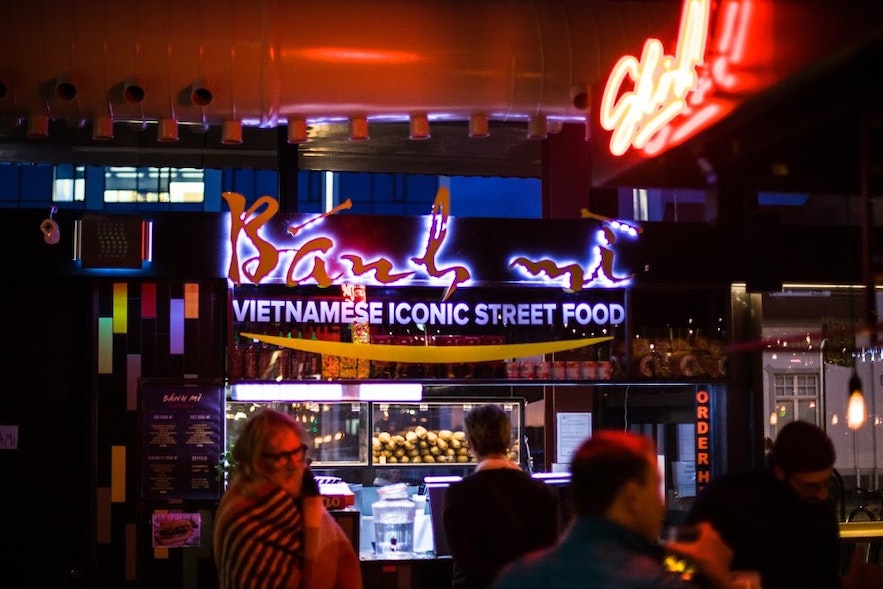 The first permanent food hall to pop up in Reykjavík is Hlemmur Food Hall, or Hlemmur Mathöll, that opened up in August 2017. This is an indoors food market, where guests can buy anything from fresh, organic vegetables or flowers, newly baked bread and take-away coffee, to greasy Mexican food, fresh Vietnamese spring rolls, a cooked catch of the day, or more upscale charcuterie platters with fancy wines or cocktails.

It's located centrally, in a former bus station, and is still the central place for city buses so the perfect place to stay warm and grab a bite to eat if you're catching a bus to some outskirts of Reykjavík. 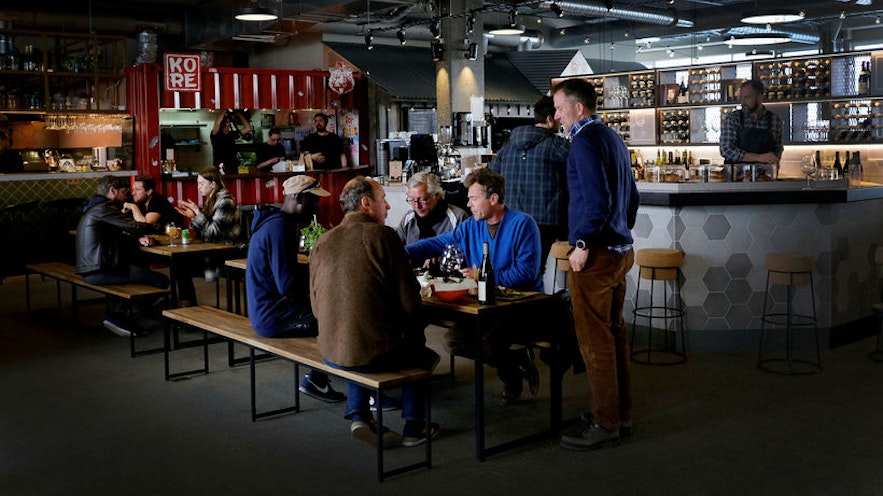 I'm mostly excited about Kore, as there has been a lack of Korean food in Reykjavík, and here you can get Korean food with an LA twist, such as deep fried spicy chicken served in tacos. 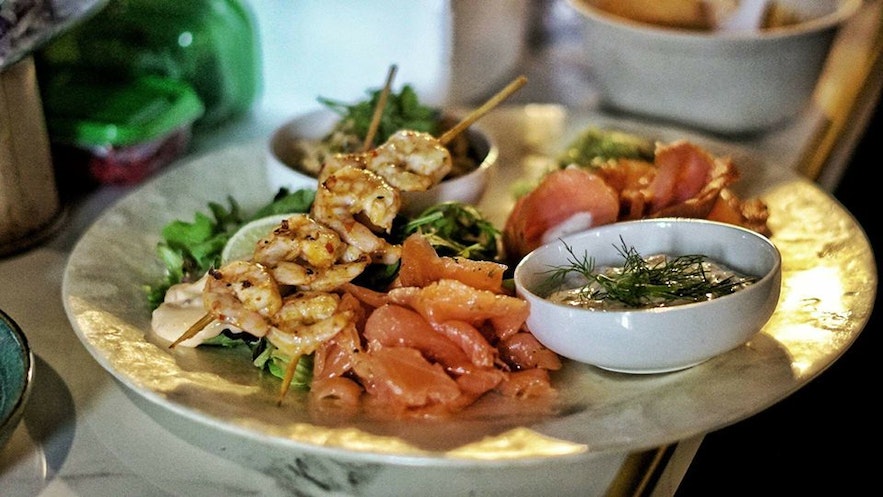 Right next to it is Lax, where the focus is on seafood and Prosecco, but they serve both beer and bubbly on tap! Included on their menu is some gin-marinated salmon and ceviche, along with other cold seafood platters. And of course you can get some lovely sparkling wine cocktails, such as Aperol Spritz. I have a feeling this might become one of my favourite spots in town.

Additionally there's one pop-up stall that will rotate chefs monthly, serving up the hottest and newest trends within the Icelandic food scene. And entertainment will take place here from time to time, such as stand up comedy and concerts.

The location is in the up-and-coming Grandi district of town, right by the harbour and you can even see the arrival and departure times of ships on monitors within the food hall. You'll also have a great view over the harbour towards Harpa Concert Hall.

The same street that hosts Grandi Mathöll is also the home to various exciting foodie pit stops. This is the 'fishpacking district' of Reykjavík, and you can find the Japanese teahouse Kumiko, cheese shop Búrið, ice cream parlour Valdís, a great butcher shop called Kjötkompaní, Bryggjan brewery and two of the best pizza places in town in the same street.

The summer of 2018 did not only see the opening of a new food hall in Grandi, but also the pop up street food market Box in Skeifan (an area of town that's just on the outskirts of the city's centre).

As it is the summer of World Cup, this street food market has a giant TV screen, showing all the matches, as well as a bunch of musicians coming to perform and keep it partying.

Box street food market has limited opening hours, it's only open from Thursday to Sunday, from 12 noon until 21:30 (20:00 on Sundays). The choices of food range from Philippine or Indian/Mexican dishes to classic Icelandic dishes. There are vegan choices, pizzas and waffles, and of course a beer booth.

Unfortunately for the organisers the summer of 2018 has been the worst Icelandic summer in about 100 years, with rain battering guests almost every day, and they had to postpone their opening concert a couple of times. Here's hoping that doesn't deter them and that Box Reykjavík Street Food is here to stay!

The square that's found on the middle of Laugavegur shopping street was a popular hangout for local street artists until buildings were crushed and new hotels rose instead of them. The now-paved square is still struggling to find its identity, but shopkeepers and hotel owners have been trying their best to give it life, both with holding a Christmas market there selling goods as well as food, and throwing events there in summertime, such as big screens showing World Cup matches.

In fact, the Canopy Hotel that makes up two sides of the square is doing well in being inclusive of the local culture, making former street art a part of its features, and showcasing music posters from the former nightclub Faktorý that used to be there in its place. Canopy Hotel also holds one of the best restaurants in town, Geiri Smart, where you can go for a fancy meal, delicious brunch or tasty cocktails. 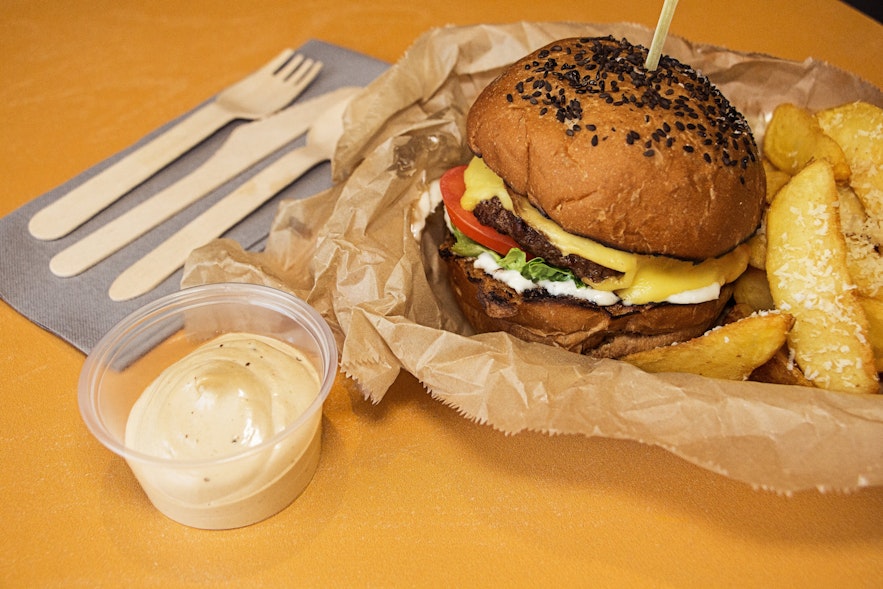 However, they also offer a street food section during summertime, and in my opinion one of the best burgers in town can be had here, at Geiri Smart street food. The Rib Eye burger is just the right amount of juicy, with delicious Tindur cheese, but it's the truffle remoulade that ensures its place as one of the best burgers in town. The accompanying chips are also covered with parmesan cheese and oh-so-tasty!

The most classic Icelandic street food you can get is a hot dog. There's a hot dog stand in the centre of Reykjavík that is by far the oldest street food cart that exists in the city. The toppings you can choose from are ketchup, mustard (special Icelandic hot dog mustard, a pretty sweet one), remoulade (mayonnaise and onion based sauce), raw onion and crunchy onions. I'd recommend to just get one with everything, but you can also just specify which toppings you'd like. This is also the cheapest street food you'll find in Iceland.

Most Icelandic hot dogs are served with the same toppings, although some hot dog stands (especially ones within gas stations) vary, and in some locations you can for example get bacon wrapped hot dogs and potato salad as a topping.

Icelandic Street Food is also the name of a small restaurant in the centre of town, where you can find traditional meat soup, fish soup and fish stew. It doesn't get more Icelandic than that. The owners are fun and often give away tasters of fermented shark and shots of brennivín, and for dessert you can get a homemade 'Happy Marriage Cake' made by the owner's grandmother.

If you want to try the tasty Icelandic lamb, but with some exotic Moroccan flavours, then another restaurant, located in the Grandi area is Lamb Street Food, where obviously the focus is on lamb, served in kebabs. Accompanying it are fresh salads, dates and apples, and varying sauces and dips, such as mango chilli sauce or yoghurt sauces. There's also a tasty salad bar that includes for example quinoa, seasoned potatoes, carrot salad, mozzarella, falafels and more.

Fish and seafood is very Icelandic, but Fish and Chips are not a traditional Icelandic meal, but imported from the UK. The truck you can see in the above video however has some truly tasty fish and chips, and more and more of those are popping up.

Icelandic street food has come a long way in the past few years and months, with a delightful variety to choose from these days, and probably only more variety to come!