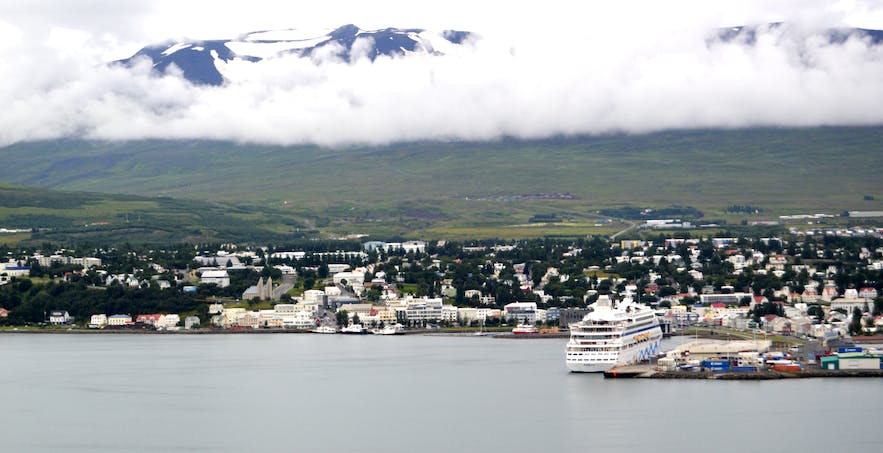 I have written many travel-blogs on the extraordinarily diverse Mývatn area in North-Iceland. Now I want to show you a guided tour of Mývatn, as it is always very informative to listen to the geological explanations of the guides and learn new things about Iceland.

I was staying with a friend for a week in Akureyri, which I always do around the time of Fiskidagurinn mikli - the Great Fish Day festival in Dalvík, and decided on trying out as many tours as I could in this area to introduce them to you.

I was picked up at 7:45 am outside the offices of Saga Travel-GeoIceland in Akureyri, the capital city of North-Iceland, and the guide made the first stop at a view-spot on the other side of Eyjafjörður fjord where we had a beautiful view of Akureyri town. 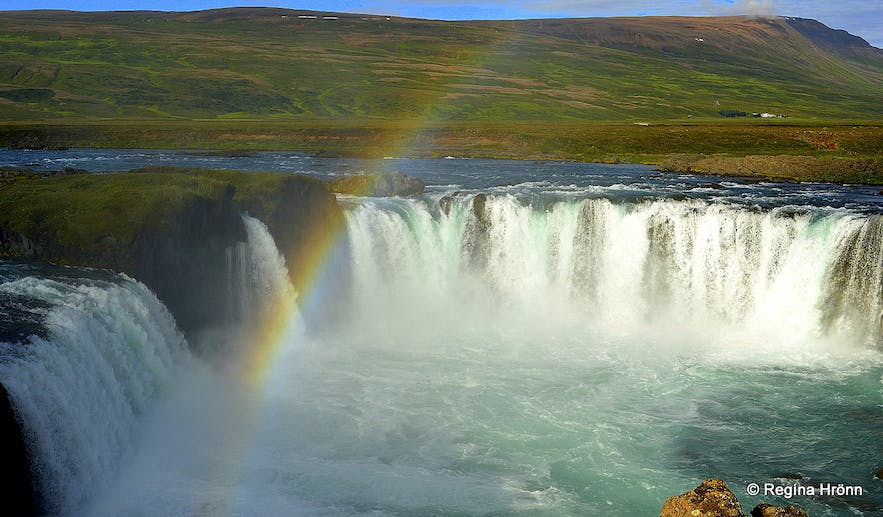 Our second stop was by Goðafoss waterfall, which is a beautiful and historical waterfall, right by the main road.

The name, Goðafoss, means the Waterfall of the Gods. There is a story behind it dating back to the year 1000. The conversion to Christianity in Iceland was made in that year and the Lawspeaker and ex Pagan Chieftain, Þorgeir ljósvetningagoði, is said to have thrown his idols of the old pagan Nordic gods into this waterfall - right after returning from the Alþingi Parliament at Þingvellir where the conversion was made. I cannot find this story, so it must have been folklore of some sort.

I always think about this Viking story when I visit this beautiful waterfall. On this tour, we visited the east bank where you can admire the waterfall from a new platform. Also on the east bank, you will be able to see the beautiful artwork of nature on the west bank - see my photo below. 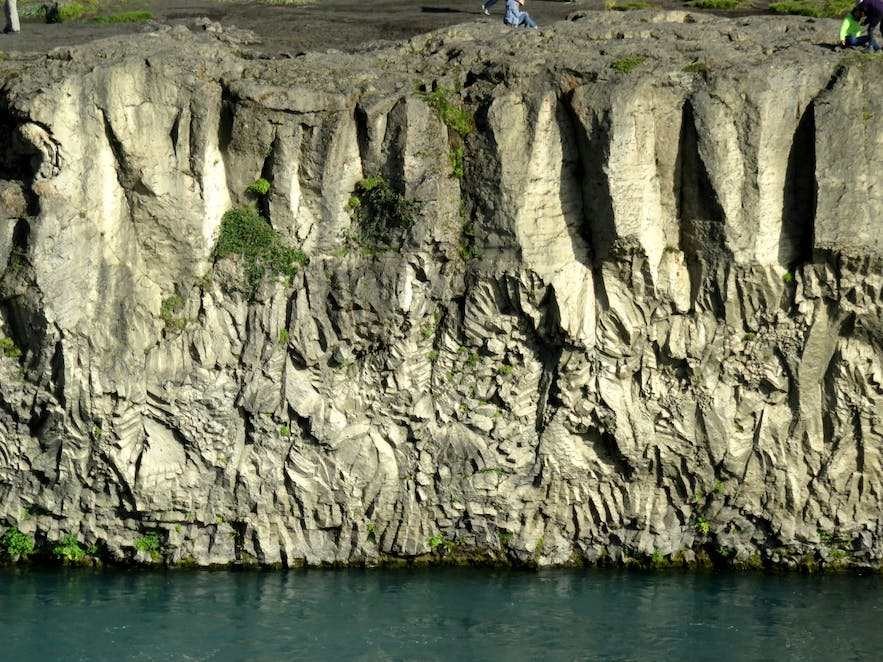 This historical waterfall, which has a drop of 12 meters and a width of 30 meters, cascades into the white and green glacial river Skjálfandafljót. 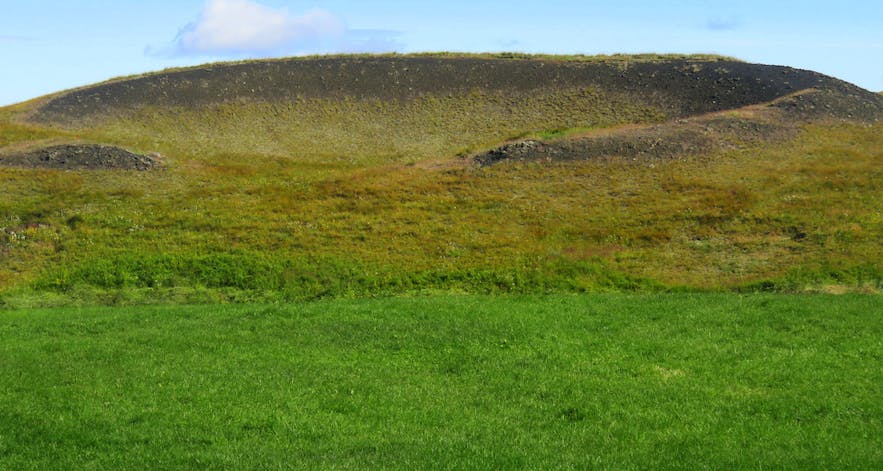 After visiting Goðafoss waterfall we entered the Mývatn area, where the first place of interest is Skútustaðir pseudocraters.  There we made our third stop and walked on the ridge of the pseudocraters where there is a lovely view of Lake Mývatn.

This natural phenomenon is formed when lava flows over wet ground and pushes the ground down. This causes steam to be trapped under the weight of the lava which in turn causes a lot of pressure. When the pressure becomes too great it causes steam explosions and the formation of these strange looking pseudocraters.

As far as I know then this phenomenon can only be seen here in Iceland and on the planet Mars.

We made our fourth stop by Lake Mývatn, which was created in a basaltic lava eruption 2300 years ago. There are so many freestanding lava formations in this area, including the lava pillars by and in Lake Mývatn.

Lake Mývatn is 36.5 km2 and there are some 40 islands and scerries on the lake. The lake is protected as a nature reserve as there is a very diverse water bird life here, including at least 15 species of ducks, and nowhere else on earth do as many duck species gather as in this area. 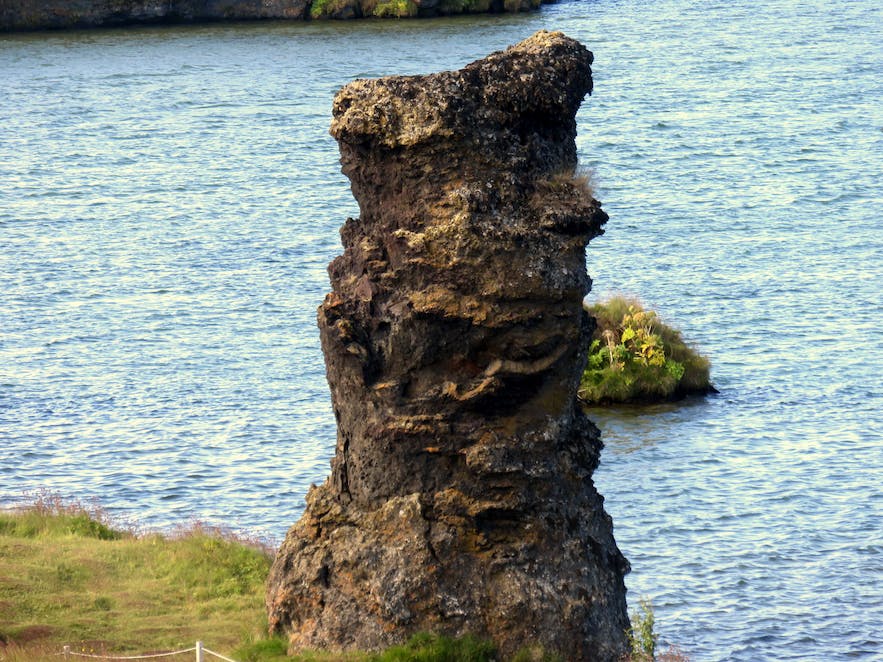 Lake Mývatn gets its name from the myriad of midges in this area. They can be quite annoying, but they are the base of the ecosystem of Mývatn, so we have to endure them. Our guide told us that twice during the summer huge black clouds can be seen - these clouds are the midges mating.

He told us that there can be from 750-900 tonnes of midges in this area! After their death, the midges enrich this area even further as then they become fertilisers.

Dimmuborgir - the Dark Fortress - at Mývatn is a true wonder of nature - an extraordinary labyrinth of lava formations. Here we made our fifth stop.

The formation of these lava cliffs and pillars is caused by lava ponds - hot lava streamed over these ponds trapping the water underneath the lava. Steam issued through a vent in the lava ponds and formed these pillars, which then remained standing after the crust around them had disappeared. 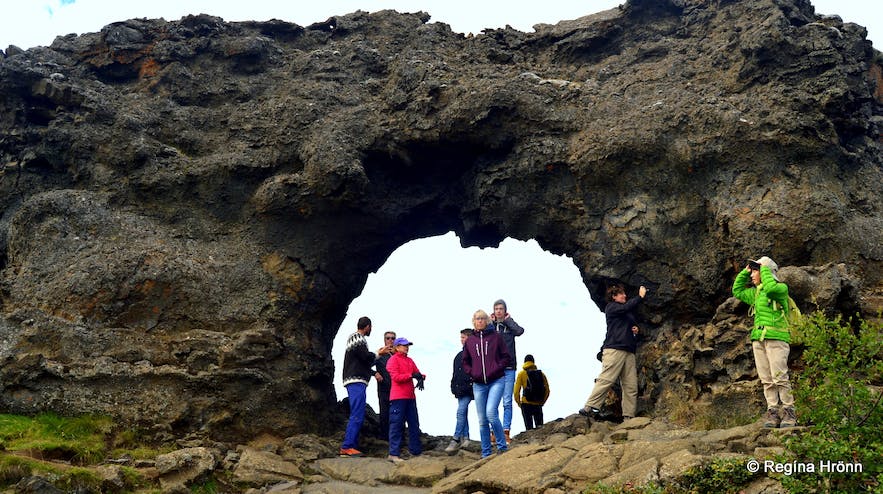 Dimmuborgir is 1 km in diameter with several walking paths - our guide walked us through these extraordinary lava formations for 35 minutes and made several photo stops. I love visiting this area - there is even a hidden cave here where the Icelandic Yule lads live! 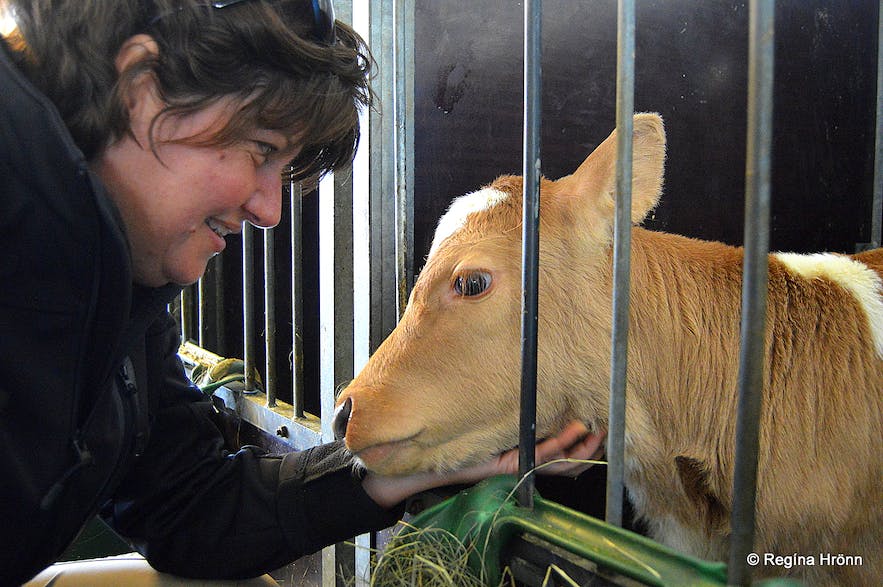 It was now time to have lunch so our sixth stop was made at Vogafjós restaurant.

I took so many photos of my fellow traveller stroking and talking to one of the calves, as it was so beautiful watching them together. 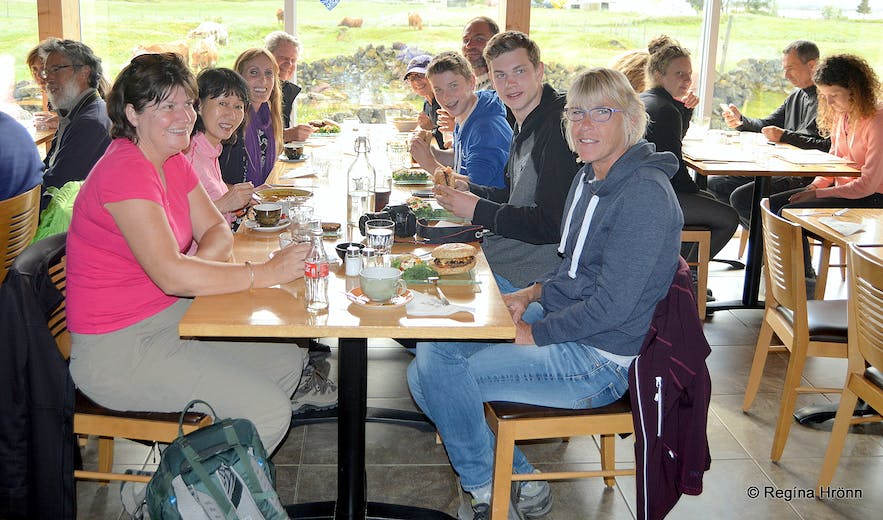 The farmers at the farm Vogar by Vogafjós smoke their own trout from Lake Mývatn and lamb in a turf shed on their land. And they make their own rye bread, which is cooked in hot springs in Mývatn.

The Mývatn mozzarella and salad cheese are made from their own milk from the cows in the cowshed. They also make jam and tea from locally picked herbs.

On their menu is, of course, beef from their cattle. I love it when people put their pride in offering local food to visitors. 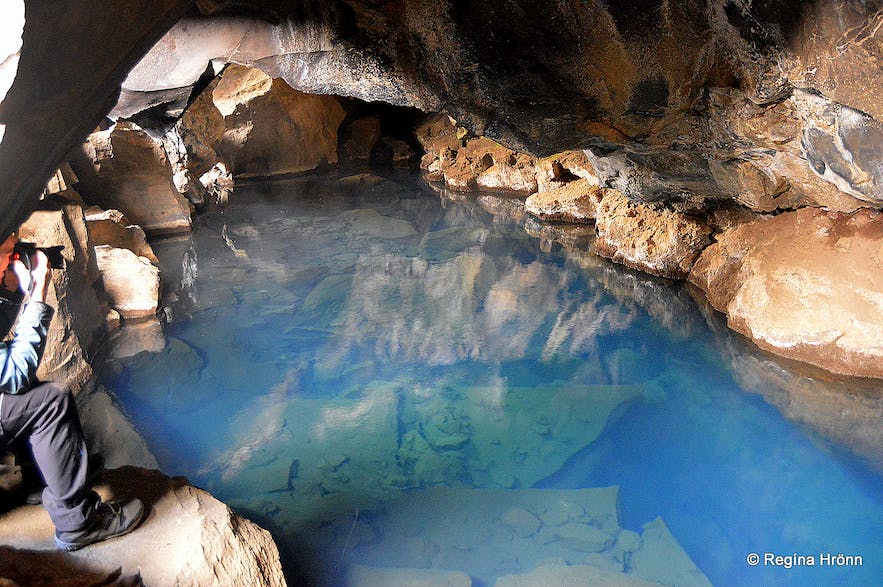 We made our seventh stop not far from Dimmuborgir to check out Grjótagjá rift.  Grjótagjá is a hot spring in a cave, with two entrances and a rocky path leading down to it. It is half-full with the most extraordinary blue geothermal water.

When I touched the water in 2016 it was a little less hot, but still too hot, so be careful as it is very rocky here and you don't want to fall in.

Grjótagjá is privately owned and belongs to the farmers at Vogar - bathing is forbidden here.

We now headed out to Mt. Námafjall and the high-temperature area, Hverarönd. Our eighth stop was made by bubbling and boiling mud pools!

We had a very good guide from Belgium, Leo, who guided us in English but also spoke excellent Icelandic. On our tour there was a Belgium family - I admire how Leo was able to switch from one language to another. Leo is in the photo with me above by Mt. Námafjall. 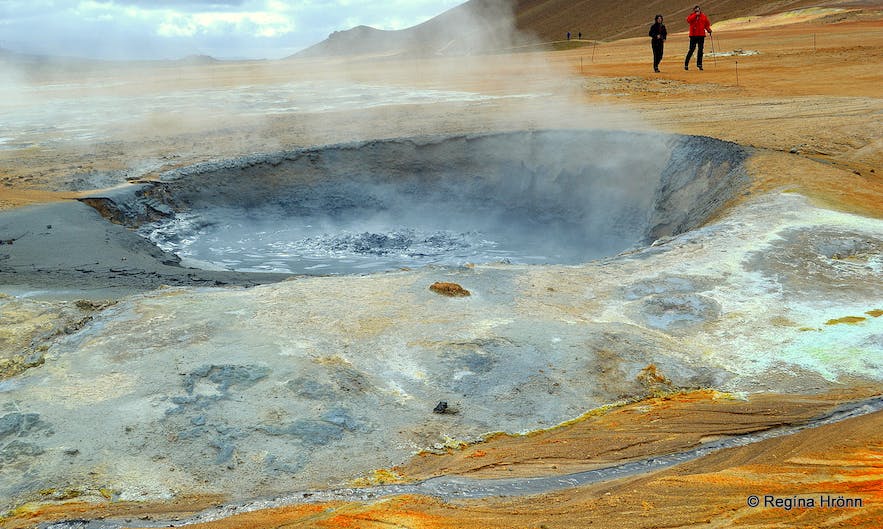 Seeing that many of the Saga Travel-GeoIceland tours are slow travel in small groups, then you don't feel rushed at all during the tour and feel like you are travelling with friends, which is a great plus when joining guided tours.

This area is referred to as the Hell's Kitchen due to the strong smell of sulfur in the air caused by the steam and the fumarole gas, such as hydrogen sulfide. This gas can give you headaches and nausea if you stay in geothermal areas for too long or if it is very windy.  It happened to me on one occasion and it took me 2 days to recover. 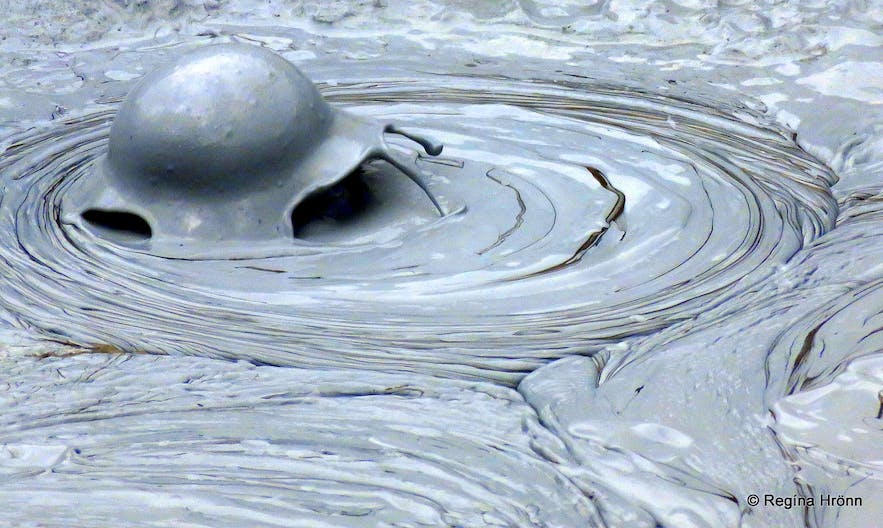 The hot springs also produce considerable sulfur deposits which were mined in Iceland in previous centuries to produce gunpowder. The strange yellow, orange colour of this geothermal area stems from the sulfur. You can see the yellow sulfur in my photo below.

Let's be extremely careful in this area as it is very hot and we do not want to see anybody get hurt or burned here. It is very important to stick to the paths in this geothermal area - and that goes for all of Iceland's geothermal areas. 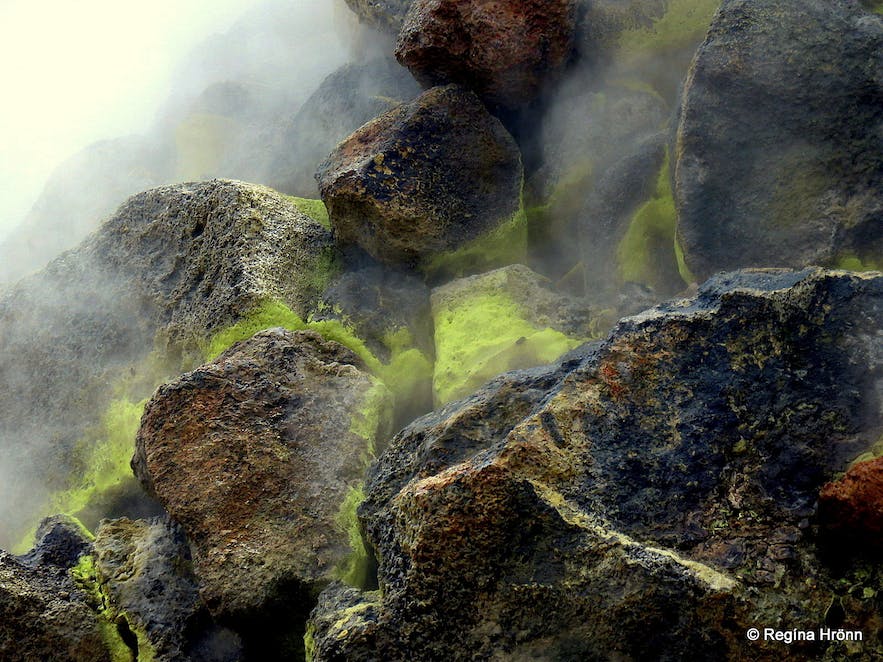 I always get a knot in my stomach when I see footsteps inside the fenced-off geothermal areas!

We Icelanders are brought up to fear the dangers in the Icelandic nature, so we know not to step inside fenced off spots in geothermal areas as if you step on mud inside these fences your foot might sink straight into a hidden boiling hot-spring and get severely burned. This has happened on several occasions, so this is a real danger.

So my sincere plea, to those of you who don't know this, is: "Be careful out there"!

The Mývatn Nature Baths - the Blue Lagoon of the North 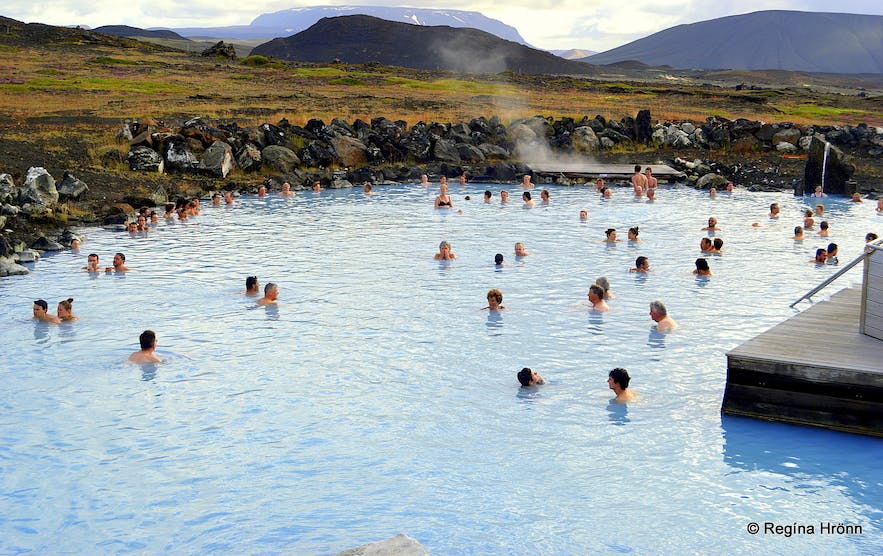 By now it was 2:30 pm and time for some relaxation. Our ninth and final stop was at the Mývatn Nature Baths, where we soaked for 40 minutes. The admission fee to the Nature Baths is included in the price of the tour, so the whole group dipped in.

I asked to be left behind when my fellow travellers left the Nature Baths and were driven back to Akureyri, as I was going to stay in our summer cottage at Mývatn for the night. My husband drove from Akureyri and picked me up later on. I soaked by myself in this wonderfully blue geothermal water for 2 hours and the sun even came out, making this scenery even more beautiful.

The geothermal water in the Nature Baths, which cover the area of 5,000 m2, is drawn from depths of up to 2,500 meters and is rich in minerals, silicates, and geothermal microorganisms, which are believed to be beneficial for the skin.

The Mývatn Nature Baths are sometimes called the Blue Lagoon of the North. Soaking in the warm geothermal water is an excellent way to wind down after a day of visiting all the interesting sights in the Mývatn area. 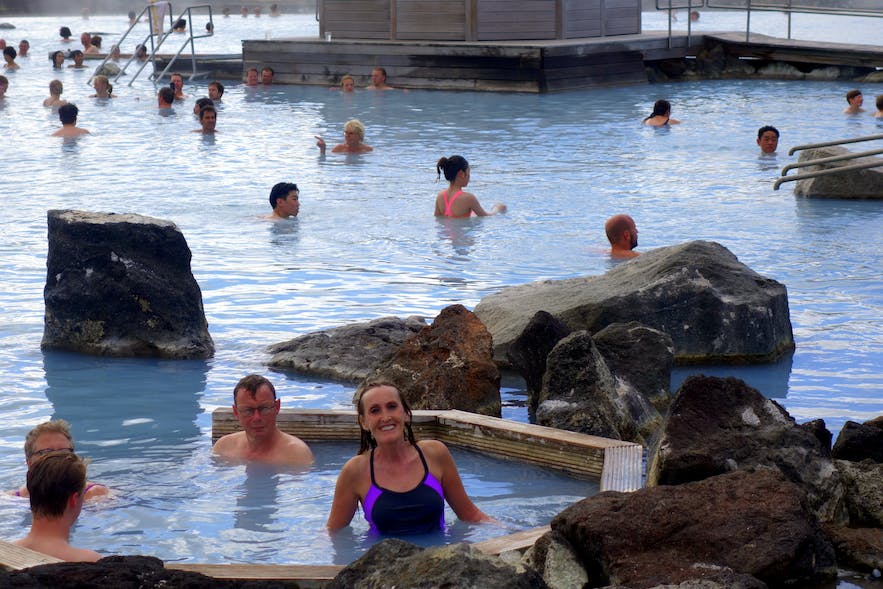 This had been a truly wonderful day so I am glad I joined the day tour of Mývatn - I learnt a whole lot about this area and got to know some lovely people in the group.

I joined several other guided tours by Saga Travel-GeoIceland while travelling up north:

A Wonderful Day of exploring the Mývatn Area in North-Iceland