Akureyri is the capital city of North Iceland and situated in Eyjafjörður fjord, so I think it is fitting to add a special travel-blog in my Eyjafjörður series on this magical city of the North. It has got a population of some 19,000 people making it the second-largest city in Iceland after the Greater Reykjavík area.

Akureyri is such a beautiful city with a lot of character, surrounded by high mountains and only some 100 km away from the Arctic circle. A lot of cruise ships stop in Akureyri harbour in the summertime, and I have never visited it without seeing a cruise ship in the harbour.

I love visiting Akureyri and it brings back good childhood memories from when I visited it with my family as a child. Back then my great-aunt lived here and we often stayed with her. Now I have got many relatives who live in Akureyri.

During my visit to Akureyri, I have camped in the campground and stayed at the hostels, hotels and guest-houses, of which there are many in Akureyri. My photo below is taken in the campground, which is in the middle of the city, next to a supermarket. Sometimes I just have to save money and camp, especially when I travel around Iceland for weeks on end - although it is not my preferred way of spending the night. 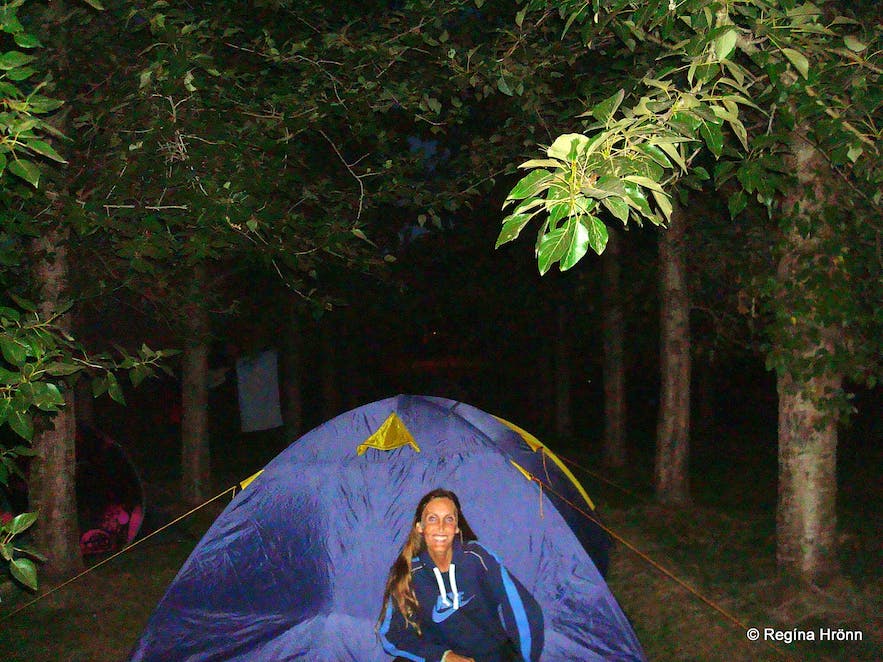 Fortunately one of our friends moved up to Akureyri because of work so now we stay we him every time we go up north. So now we visit more often and stay for longer each year. There is so much to see and do here and I will be adding a lot more to this travel-blog. The park was founded in 1912 after a group of house-wives founded the Park society and wanted "to have a park in Akureyri for the adornment for the town and a recreational place for the inhabitants". They were given 1 ha and created the first public park in Iceland and ran it with pride until 1953 when the town of Akureyri took over the management of the public garden and added a botanical garden in 1957.

At first, it was only open on Sunday afternoons, but now it is open all summer long until late in the evening. Since 1957 it has grown every year into a beautiful park with over 400 species of native plants and 6,600 alien plants.

Seeds are collected from the plants and sold to other countries, which has become increasingly popular. 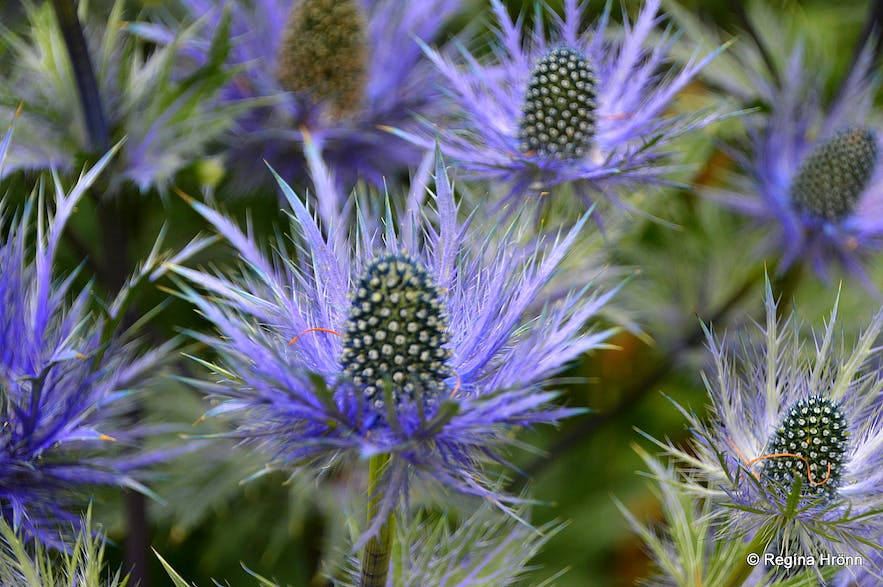 It is a really popular park both amongst the inhabitants of Akureyri and tourists alike. Do pay it a visit if you are in the area, it is ever so pretty.

I visit the park every time I go up north - it is like entering a small magical oasis of colourful flowers, statues, bridges and poems and a lovely little fountain. I have such fond memories from here when we had a picnic in the botanical garden when I was a child. Now I meet friends at the café in the park. 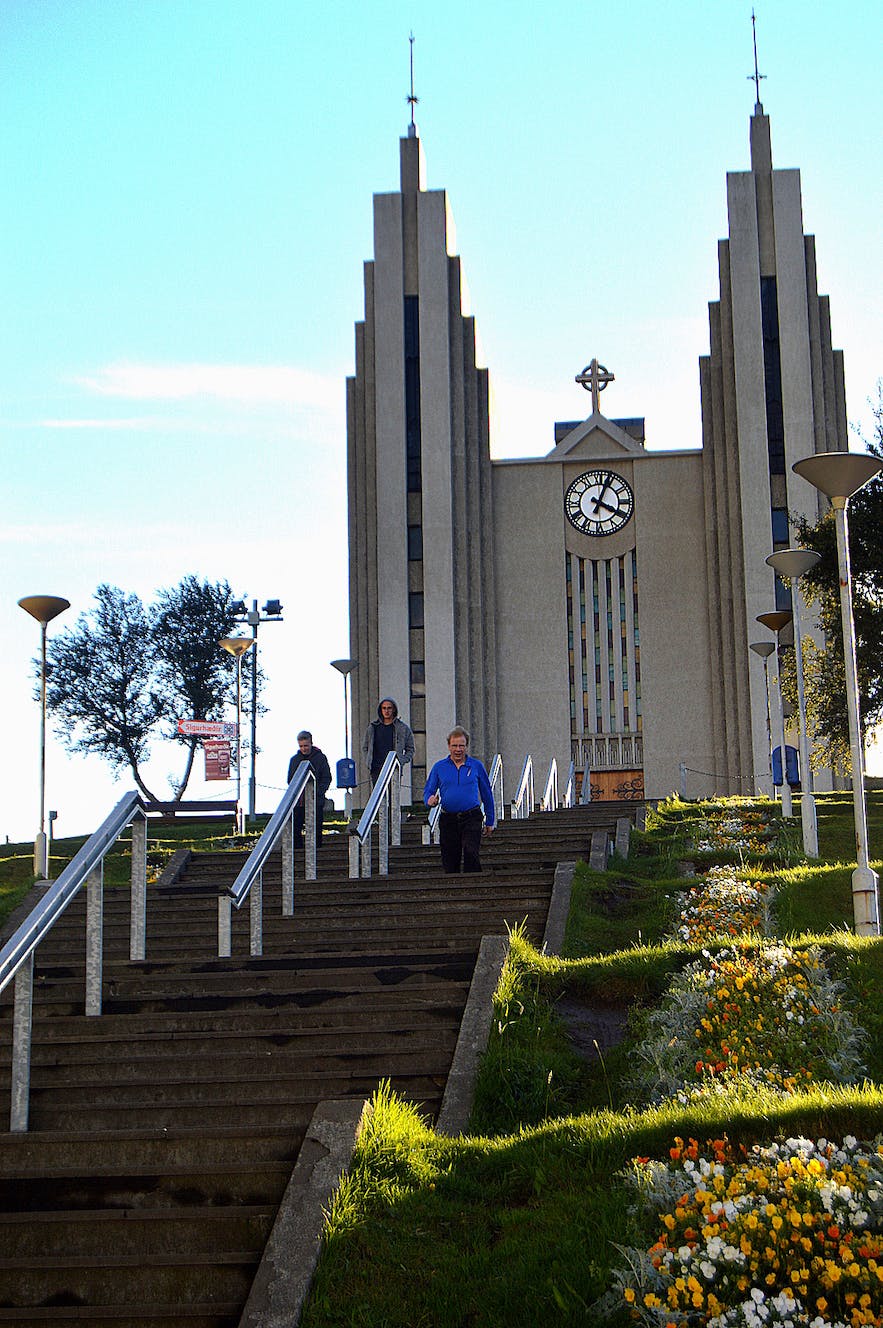 The landmark of Akureyri is Akureyrarkirkja - the Church of Akureyri - with 112 steps to the top of the hill. It is such a beautiful church, consecrated in 1940. It was back then the biggest church in Iceland.

Inside the church, you will find 17 beautiful stained glass windows. The church was designed by Guðjón Samúelsson, the State Architect of Iceland. Helgi magri Eyvindarson or Helgi the thin was the settler of the whole of Eyjafjörður and lived at Kristnes by Akureyri.  Helgi spent the first winter at Árskógsströnd (most likely somewhere close to where the Beer Spa is now located at Árskógssandur ;)).

Seeing that Eyjafjörður fjord is the longest fjord in Iceland then Helgi magri handed out parts of it to his children and kin. F.ex. Efri-Þverá, now Munkaþverá, to his son Ingjaldur. I have written a bit about Munkaþverá in another travel blog. If you search really hard you will find the statue of Helgi magri and his wife Þórunn hyrna, who was the daughter of Ketill flatnefur. But the children of Ketill flatnefur settled big parts of Iceland. Þórunn hyrna was f.ex. the sister of Auður djúpúðga, who settled at Hvammur in West-Iceland. Her brother, Helgi bjóla, settled Kjalarnes and her other brother, Björn austræni, settled Snæfellsnes and lived in Bjarnarhöfn.

The statue, which was made by Jónas S. Jakobsson in 1956, is located on top of Hamarkotsklappir behind the Police station (Lögreglustöðin) and is not easy to find.

Two prominent streets in Akureyri are named after these settlers - Helgamagrastræti street and Þórunnarstræti street.

Next to the statue, you will find an old view-dial. I was actually looking for the view-dial, when I came across the statue, as my husband's family has made most of the Icelandic view-dials. On the view-dial is written 1949 - Ferðafélag Akureyrar, but these view-dials show the names of the surrounding mountains.

The Parents of the Yule Lads in the City Centre The parents of the Yule Lads are Grýla and Leppalúði and you can find them right in the centre of Akureyri! Grýla is a very bad and grim troll, and she eats badly behaved children, she comes to pick them up, puts them in her sack and then cooks them in her cauldron.

I always have my photo taken with these 2 trolls when I visit Akureyri :) And I do believe that most visitors have their photo taken with Grýla and Leppalúði, as they are a great photo opportunity. I have written another travel-blog especially on these two trolls and the Yule Lads if you want to know more about them.

You will find a Christmas house in Eyjafjörður fjord, only some 14 km away from Akureyri, which is open all year. There one can also meet Grýla. She sits there hidden away in a cave and is even scarier looking than the one in the centre of Akureyri. The Christmas house is open all year round and it is kind of strange, but fun, to visit a Christmas house in the middle of the summer. I have visited it on several occasions wearing a T-shirt in 20 degrees C and sunshine :)

At the Christmas house, you can buy all kinds of Christmas decorations and Christmas candy, visit the Well of the Unborn Children and the boutique where I stock up on yummy hard candy, which I cannot buy anywhere else ;) And get some beautiful photos. See also: I have only touched on a small part of Akureyri, there is so much more. It has got many lovely museums and beautiful, colourful houses, a myriad of shops, supermarkets and restaurants and interesting things to see and do. In my photo above you will see Friðbjarnarhús toy museum with old toys on display. Another old house is well worth a visit - Nonnahús, which has been a museum since 1957. Nonni, Jón Sveinsson (1857-1944), was one of Akureyri's most beloved sons and the honorary citizen of Akureyri. Nonnahús was built in 1850, which makes it one of the oldest houses in Akureyri.

At the museum, you will get acquainted with the little Icelandic boy, who got the opportunity to study in France and became a Jesuit priest. He wrote 12 books in German on his life, which have been translated into 40 languages. When I visit Akureyri I always go greet the big statue of Nonni - but Nonni has a place in the heart of at least the older generation in Iceland, who grew up reading the books he wrote. 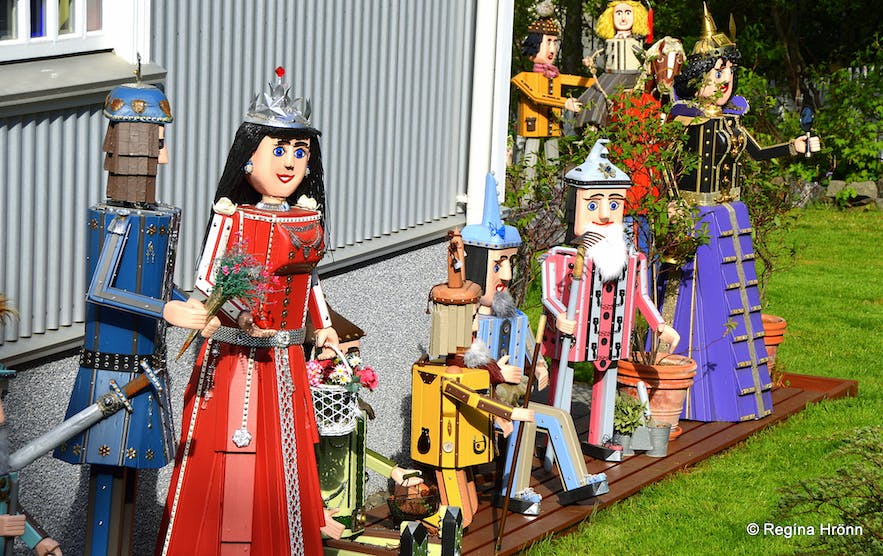 Snowwhite and the 7 dwarfs

Hidden away in a private backyard in Akureyri you will find a fairytale world. It is a garden filled with colourful fairytale figures, created by the owner of the house, the folk artist Hreinn. It is such a delight visiting this garden.

Here you will find both widely-known fairytale figures as Snowwhite and Cinderella and figures from Icelandic fairytales. 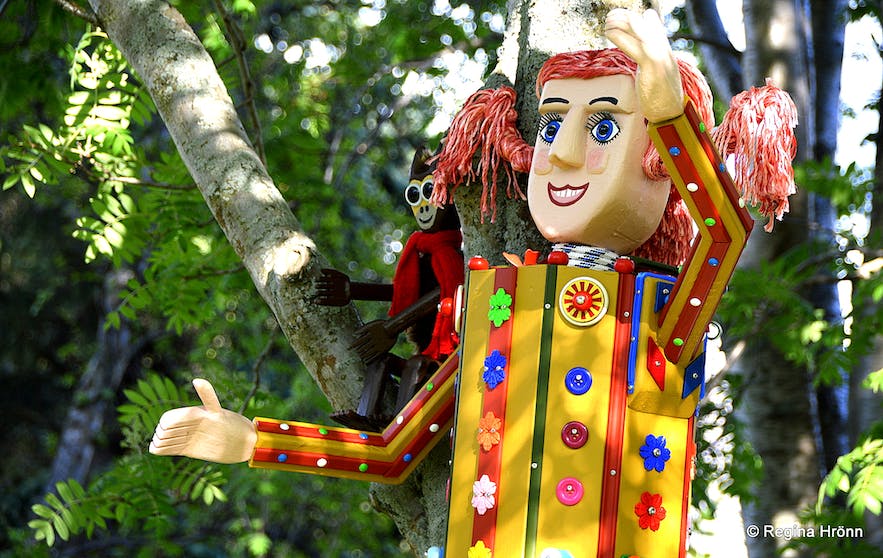 I have written a special travel-blog about these fairytale figures with a lot of photos. I am sure you will recognise many of these figures from fairytales you have read as a child:

My photo above is of Hof, Akureyri's Cultural and Conference centre, where you will also find an information centre.

Hof was opened in 2010 and has now become one of Akureyri's most prominent buildings and a landmark together with Akureyrarkirkja church. It serves as the Cultural and Conference centre for the whole of North-Iceland.

It is such a delight visiting Akureyri and I always look forward to it :)

You can rent a car in Reykjavík and drive to Akureyri in one day - it is some 388 km, depending on where you leave from in the capital city. Just to name a few of the many guided tours available in and from Akureyri - I have added more selections a little bit later in my travel-blog. I have joined many guided tours from Akureyri and written travel-blogs about my experience: A Fantastic Tour from Reykjavík to Akureyri including Hveravellir and Mt. Kerlingarfjöll

A Unique Lava Walk through the Colourful Lava Field at Gjástykki 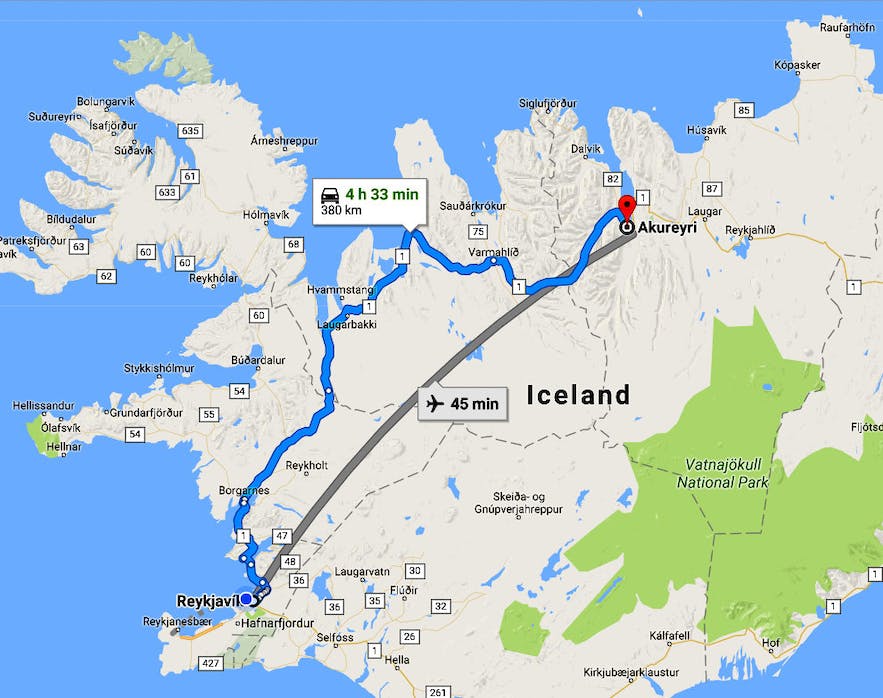 This is part VI in my series of travel-blogs on Eyjafjörður fjord - join me on an exploration of Iceland's longest fjord with some detours:

Have a lovely time in Akureyri :)