An interesting Hike into the craggy Kotagil Gorge in North-Iceland 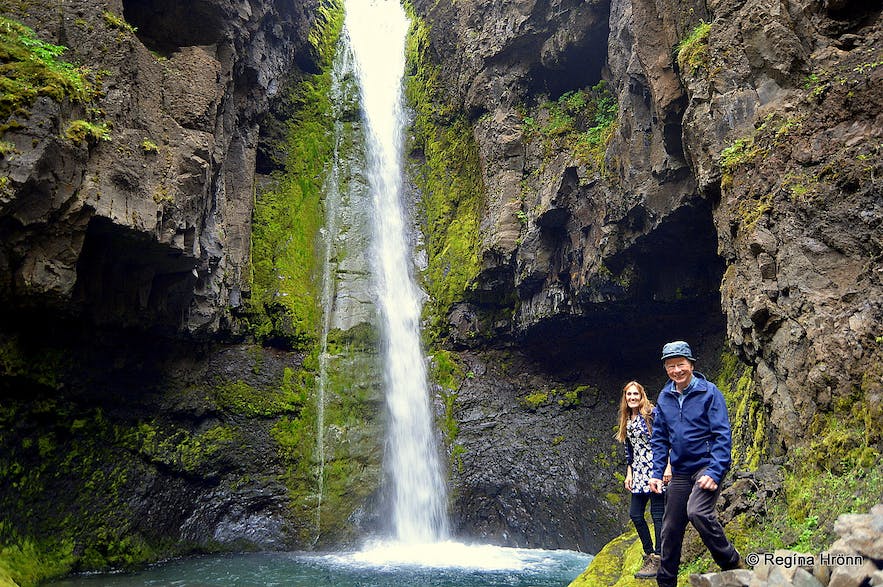 I love visiting gorges on my travels in Iceland, especially gorges with rivers running through them. As that means that you will find a waterfall at the end of the gorge. Kotagil gorge in Norðurádalur valley in Akrahreppur county (I know this is a mouthful ;)) in North-Iceland is such a gorge.

And furthermore - it is a very special gorge as it is one of two places in Norðurárdalur which are on the Natural Heritage Register. And you will see why when you visit it. 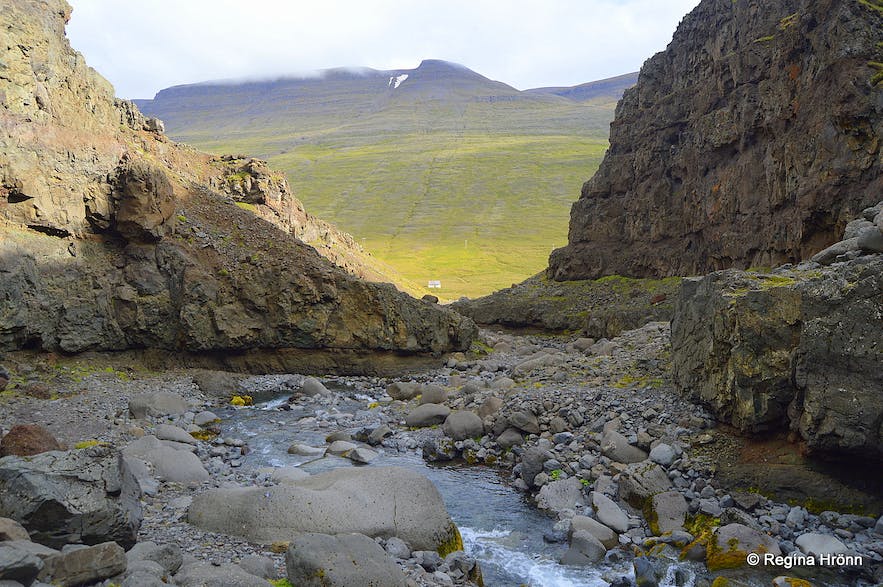 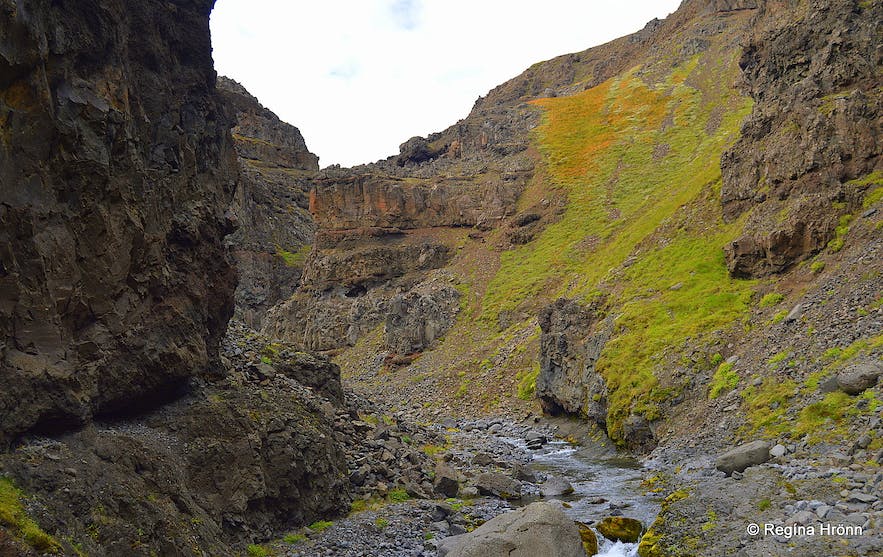 We followed the river Kotá, which looked more like a creek on the day of our visit, into the gorge, stepping on stones to cross the river in some locations and trying to follow an unclear path into this craggy gorge.

It is not a difficult hike per se, but very uneven and rocky, and the river runs by the cliffs so caution is needed here. And help from fellow travellers. 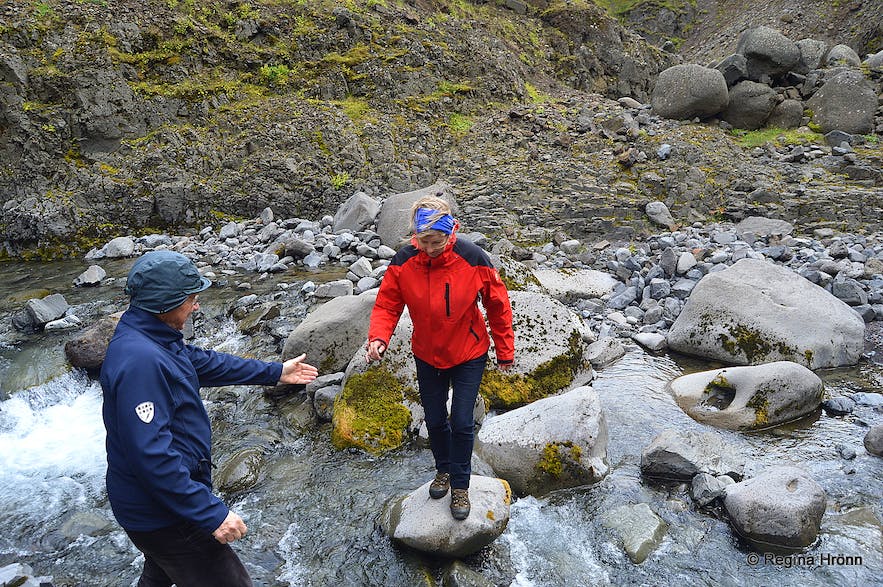 I spotted many holes in the basaltic rock, which were left there by fossilized logs, which once belonged to an ancient forest. The holes are believed to have been created some 7-8 million years ago, when piping hot thin-flowing lava, reached a forest and covered the trees, burning them in the process.

The burnt trees then disappeared with time passing leaving these holes behind. You can spot these holes close to the entrance of the gorge. 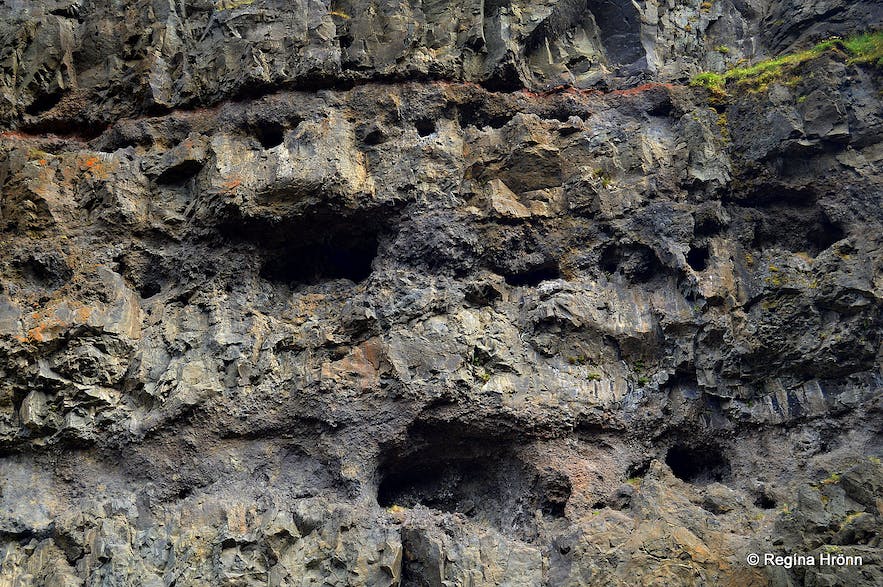 Holes in the rock from fossilized trees

Kotá river was low in water during our visit into the gorge, but it has been known to swell. In 1954 in heavy rain there were great floods in Norðurárdalur and a landslip fell onto the hayfield of the abandoned farm Ytri-Kot close to Kotagil gorge. A little bit further is the farm Fremri-Kot, which outhouses got severely damaged in this landslip. Fremri-Kot is still inhabited today.

During Whitsun the following year, the temperature rose resulting in heavy rain, causing the riverbed of Kotá to be filled with alluvium. The alluvium seems to have filled the gorge with 15-20 metres high mud and gravel! 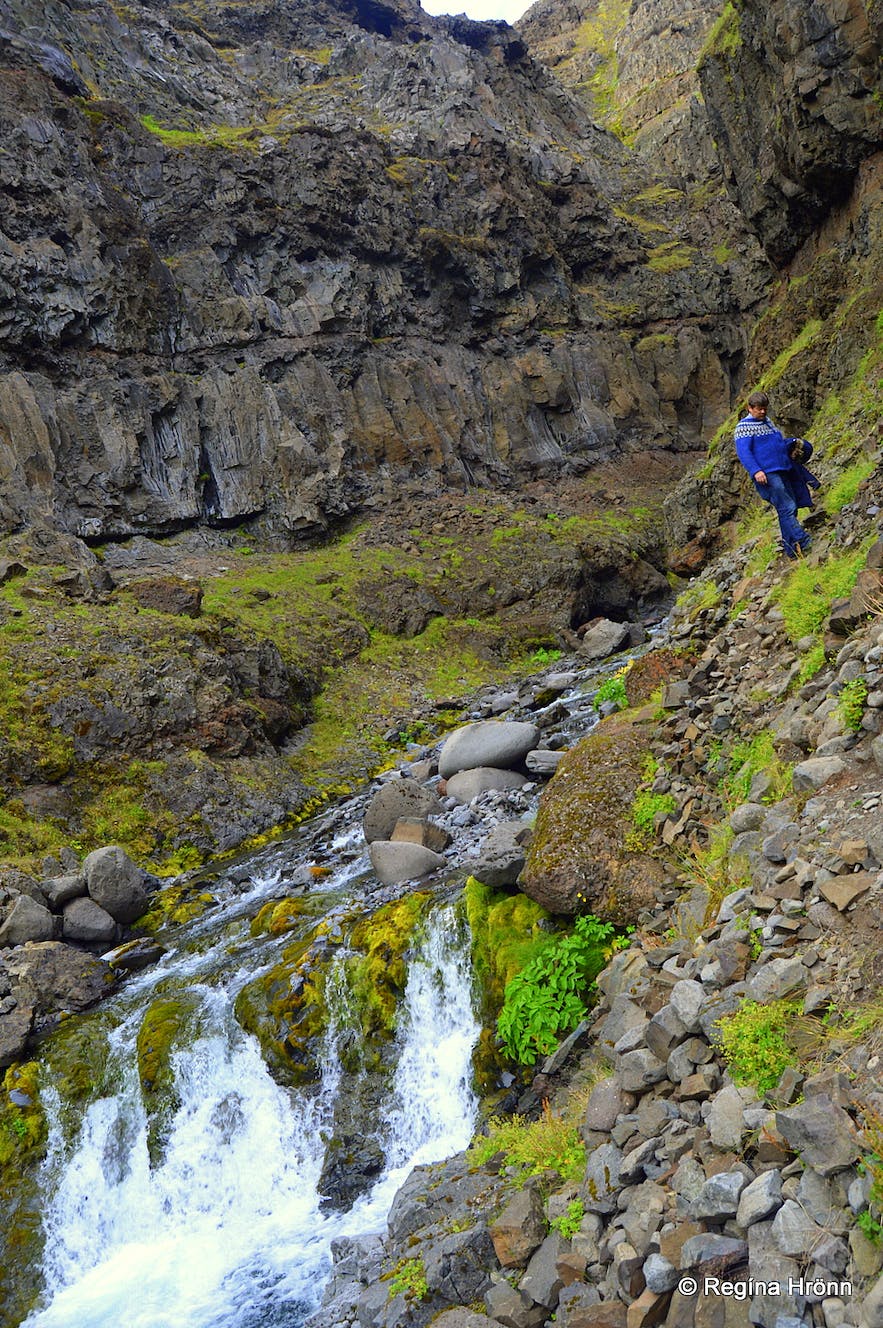 The alluvium, rocks and gravel, buried the bridge from 1926 under some 3 metres thick gravel. Which is quite something as the floor of the bridge reaches some 4 metres above the river.

As the temperature dropped again the flood lessened. Bulldozers were sent to the rescue as the bridge was on the main road, thus closing off the traffic from the south to the north (and vice versa) during the holidays. 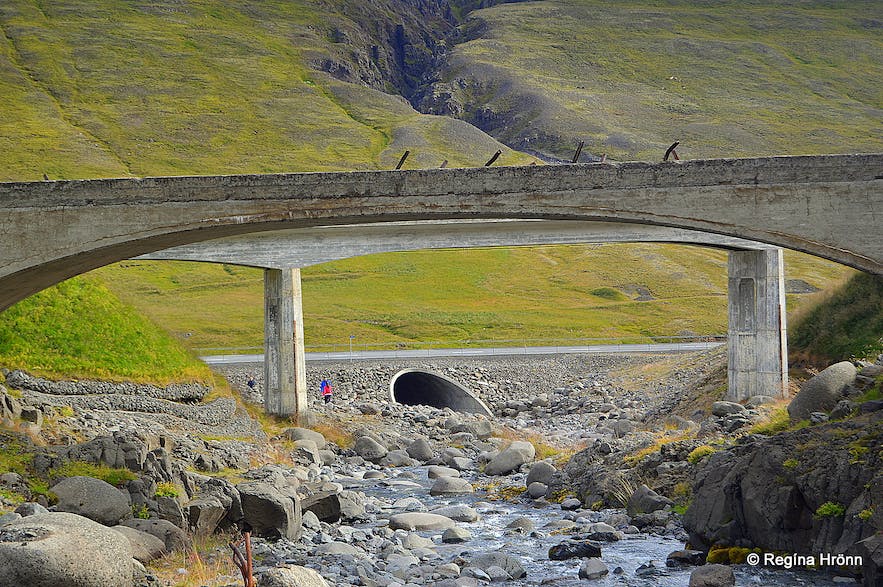 The bulldozers had to pull the cars over the obstacle to keep the traffic, which was much less back in 1955 than it is now, moving. This road is now called ring-road 1, with the last connection in South-Iceland being opened in 1974. Driving in Iceland was much different back then than it is nowadays.

It gives me chills thinking about this alluvium in the gorge. I would not have wanted to see it coming roaring towards me with great force! 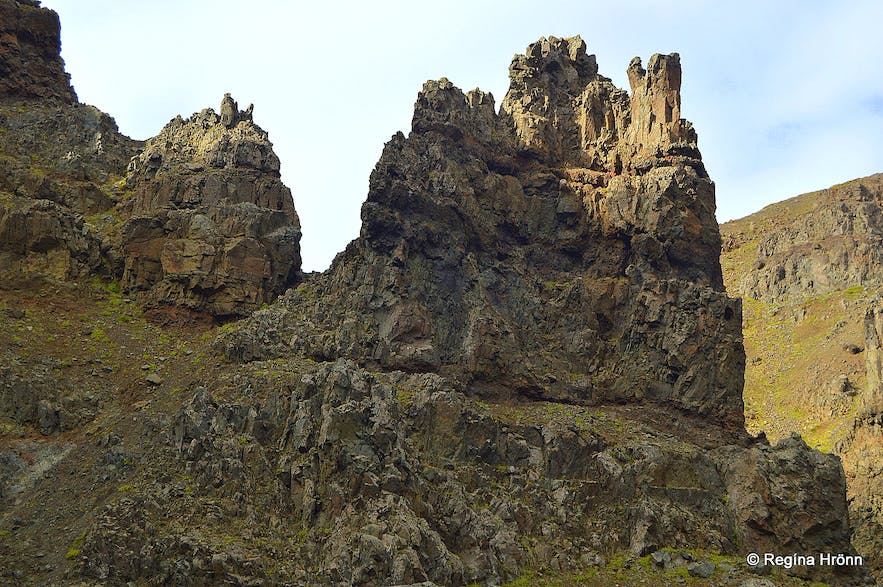 We hiked further into the gorge for some 20 minutes and noticed that my cell phone lost all connection. This hike had been a spur of the moment thing and a friend was waiting for us at Blönduós. So I felt bad not having a connection, to tell him that we would be late. And I must say that I have started to feel insecure when I am not constantly connected - modern times, eh ;)

I had read somewhere that the fulmar nests in the gorge, but the fulmar is my favourite seabird after the cute puffin. But I didn't hear any sounds from birds while hiking in the gorge. 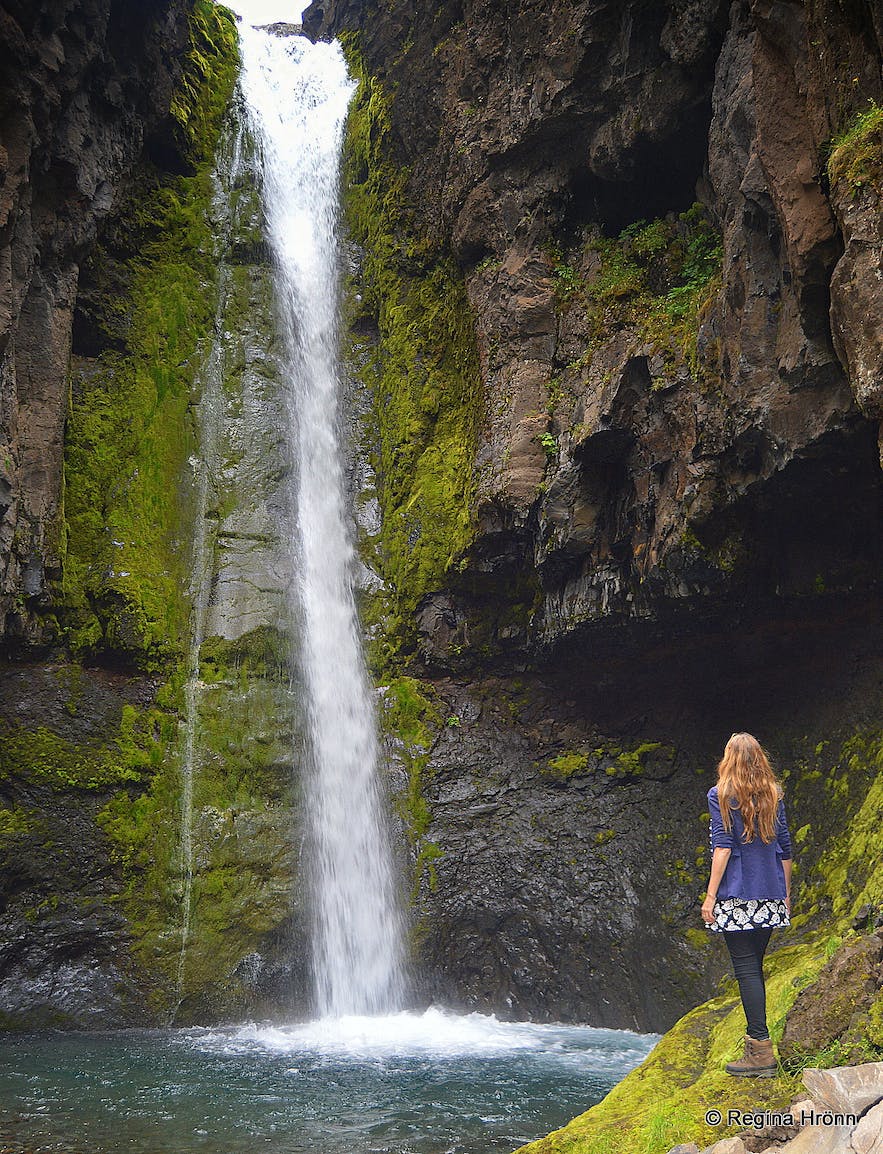 Finally, we reached our destination, and I was not disappointed with the sight that awaited me by the end of the gorge - a pretty, serene waterfall, which falls into a small pond - Kotárfoss waterfall. This waterfall reminded me of another waterfall I had visited in Nauthúsagil gorge in South-Iceland, even though visiting these two gorges is very different.

You never know what the waterfall at the end of the gorge is going to be like, and that is the surprise factor, which I seek for. We stayed for a while by Kotárfoss and took photos and then headed back the same way. I was so happy with this hike as seeing these waterfalls at the end of gorges is one of my favourite moments in life :) 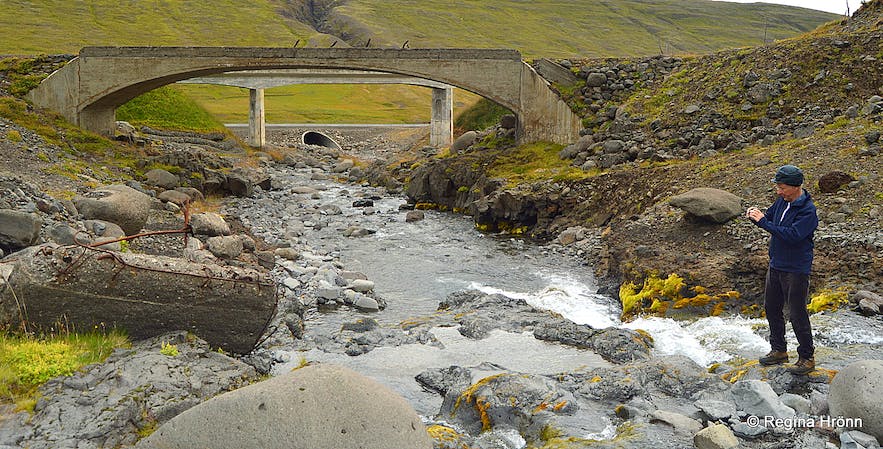 There are older bridges over Kotá river belonging to older versions of the main road. The oldest one is a concrete bridge from 1922, but it collapsed in a flood in Kotá river only 3 years later, in 1925. That flood might have been similar to the flood in 1955. You can still see parts of it in the riverbed (to the left in the photo above), but it replaced a wooden bridge from 1897.

The next bridge in the photo above was built in 1926 and that is the bridge, which got buried in the alluvium in 1955. The biggest bridge (37 metres long and 3.9 metres wide) was built in 1961. You can see that the newer bridges are built further and further away from the gorge.

The bridges over Kotá river were an accident trap with many accidents happening in this area. Cars were known to collide in the middle of the one-lane bridge as the view from both ends was bad. And by now there was increasing motor traffic. 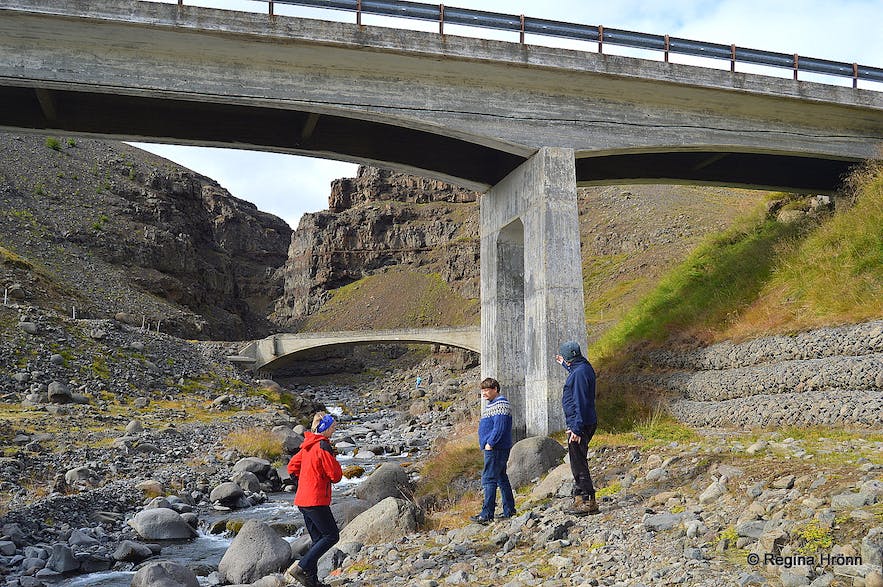 The final solution was to move ring-road 1 further away from the gorge. In 2007 a new road was laid over the river and now the river runs through a 7 metres wide tunnel under the road. This should prevent the ring-road from becoming flooded and covered in thick layers of mud and gravel.

I am glad that I got the opportunity to visit Kotagil gorge with my father-in-law as he worked for over 50 years at Vegagerðin - the Icelandic Road Administration and his speciality is - bridges :)

Allow for an hour for visiting Kotagil gorge. You will see a sign by ring-road 1 and a small parking lot where you can leave your car before you hike into the gorge. But as is always the case then cars parked by gorges attract other travellers and on our way back we met several other hikers.

There are many other dramatic looking gorges in this area. I also hiked in the gorge by Króká river on Öxnadalsheiði heath close by. And I visited the preserved Bólugil gorge, which lies on the boundaries between Blönduhlíð in Skagafjörður and Norðurárdalur valley. 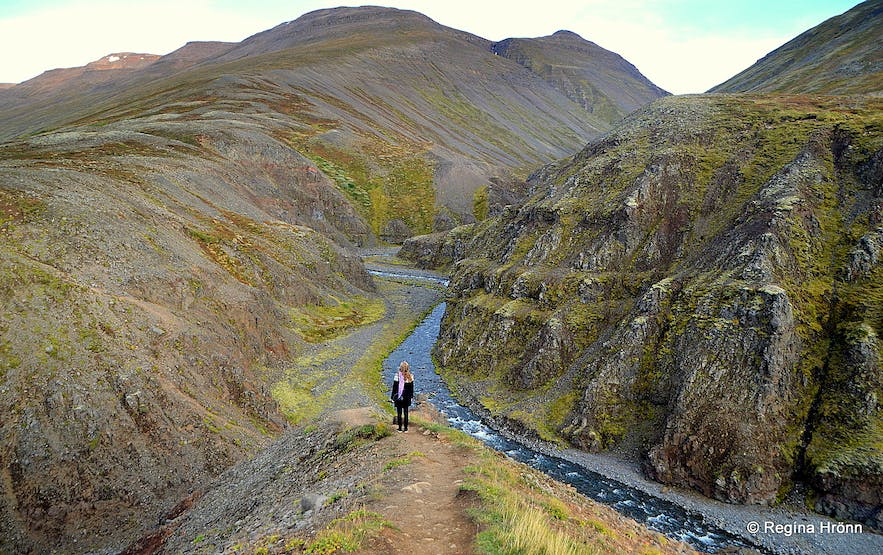 And not far away is the scariest of the gorges in this area, Merkigil gorge, but the last farmer at Merkigil farm fell into that gorge and died. That gorge is about the scariest looking gorge I have seen on my travels in Iceland! 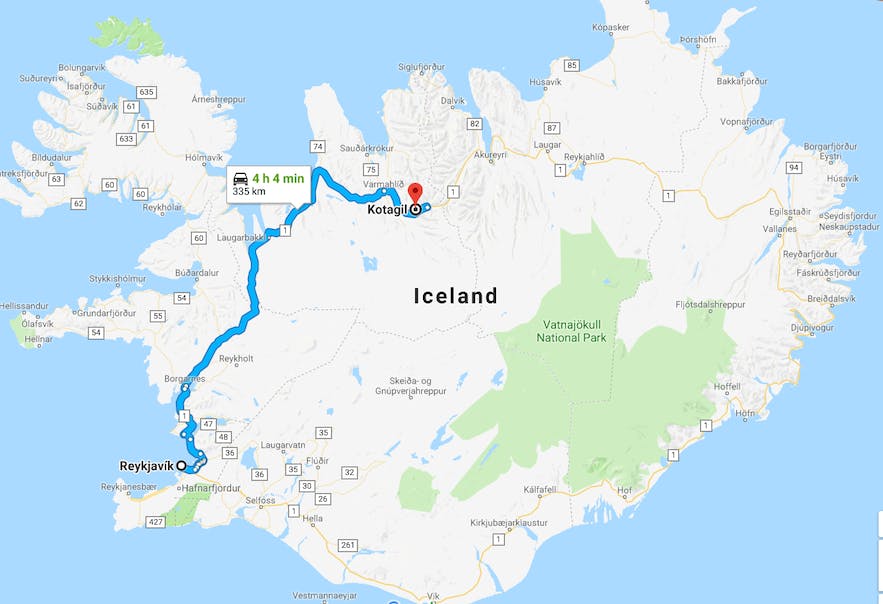 To visit Kotagil gorge you can rent a car in Reykjavík and drive up north. Norðurárdalur valley connects the historical Skagafjörður with Öxnadalsheiði heath which in turn takes you to Akureyri, the Capital of the North. A very interesting drive with a lot of stops by beautiful sights on the way.