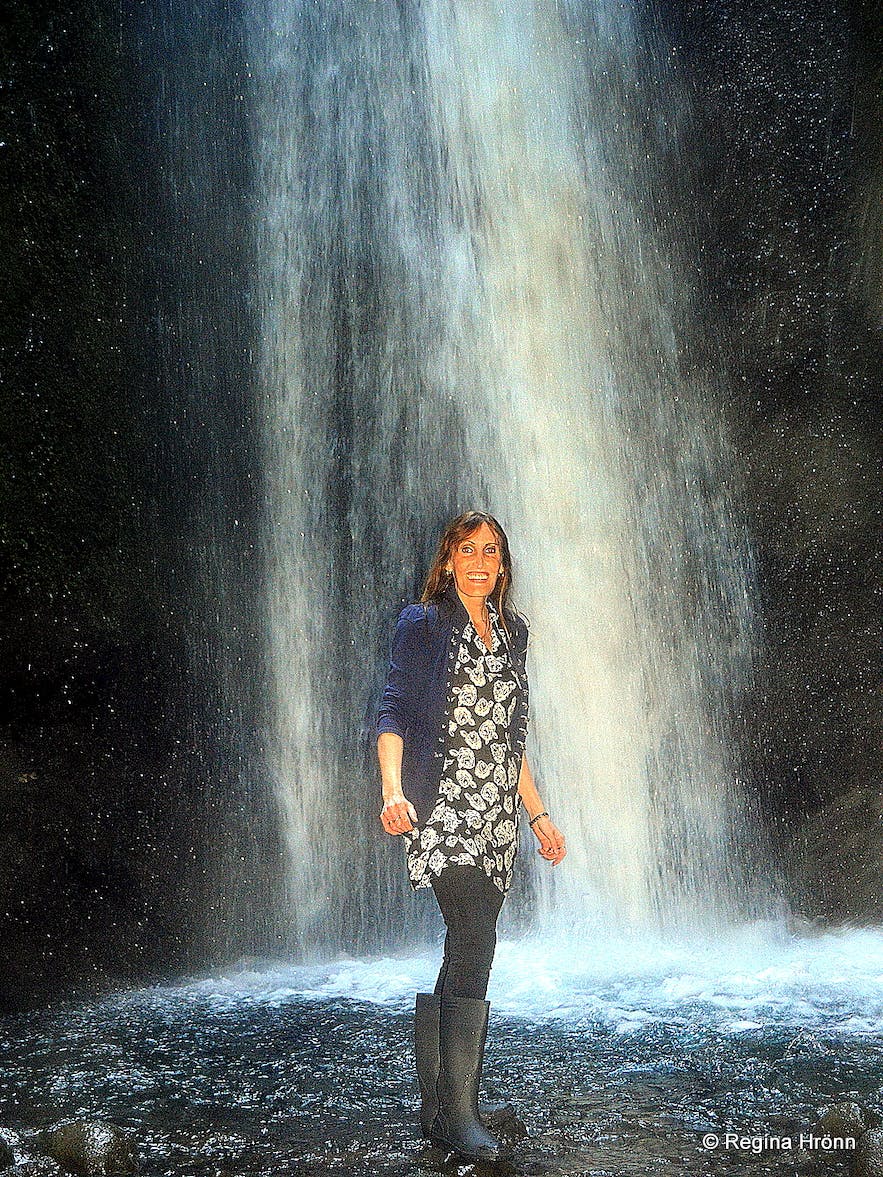 There are some hidden places in Iceland, which are like out of this world. I visited one of them recently, the mystical Nauthúsagil ravine in South-Iceland, which translated to English means Bull Shed Ravine. I know that the name sounds a bit strange, but I will explain a little further on in my travel-blog.

Characteristic of Nauthúsagil is the rowan that grows on the rims of the ravine and in some places it creates a see-through roof, which almost covers the ravine from above and adds to the mystique. It is especially beautiful when the sun shines through the rowan and into the ravine. 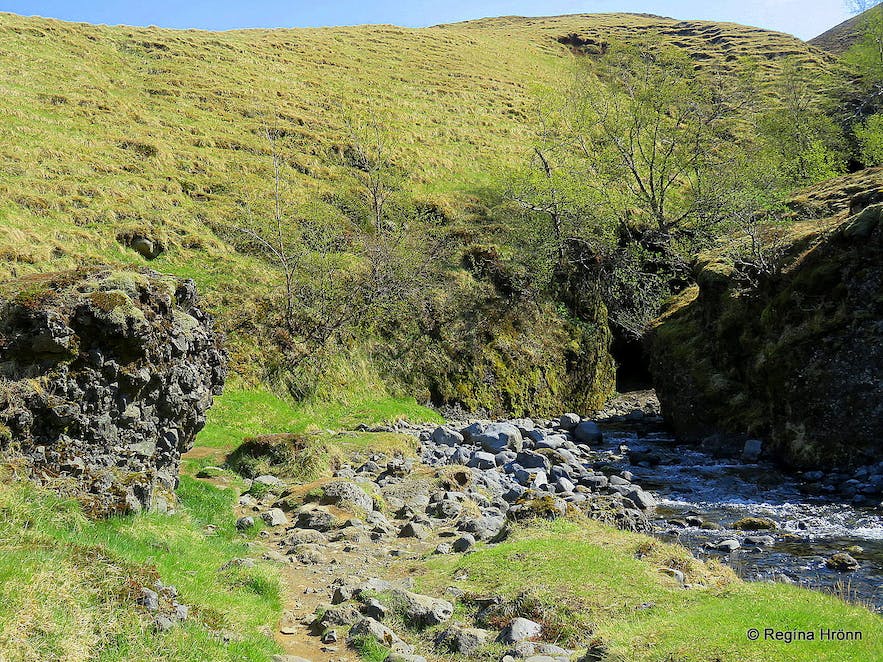 I visited Nauthúsagil ravine in May when the vegetation was still a bit wilted and yellow, but the rowan was just about to come to life again for the summer.

There is a waterfall in Nauthúsagil ravine, several of them, I think. To get to the first waterfall at the end of the ravine one has to wade the small river or jump on stepping stones, but at one point there are chains available to help with climbing over a small waterfall on the way.  It is relatively easy.

Not far from here you will find the immensely popular waterfall Seljalandsfoss, which is unique as it is so easy to walk behind it. Next to Seljalandsfoss lies Gljúfrabúi waterfall, hidden away behind a big rock in a small gorge.  Gljúfrabúi or the Dweller in the Gorge was not so long ago a hidden location here in these parts of South-Iceland but has by now become almost as popular as Seljalandsfoss waterfall. 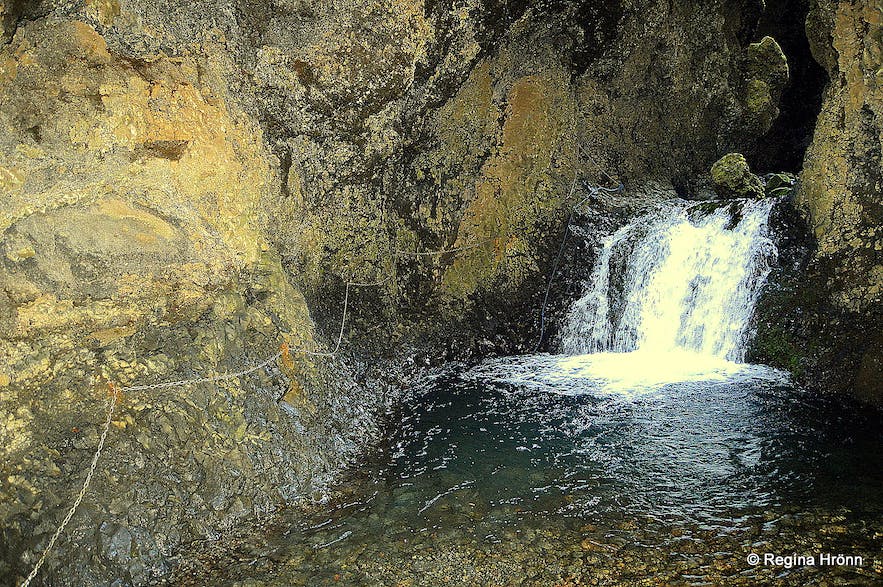 Above these waterfalls hovers the dreaded Eyjafjallajökull volcano, remember when it erupted back in 2010 and air traffic was severely affected by the ashes which Eyjafjallajökull spouted high in the air?

The much lesser known Nauthúsagil ravine still remains hidden and few people know about it and visit it. It is located behind Stóra-Mörk farm, where my husband has got relatives, and the name is believed to stem from an actual bull shed being built here for the bulls from Stóra-Mörk farm. The bulls grazed in this area with other non-milking stock.

A smallholding, Nauthús, stood here but was abandoned in 1777 due to the excessive haunting of the farm -  and it is believed that this area is still haunted! Now, let's walk up the small river, Nauthúsaá, and explore this small and narrow ravine. 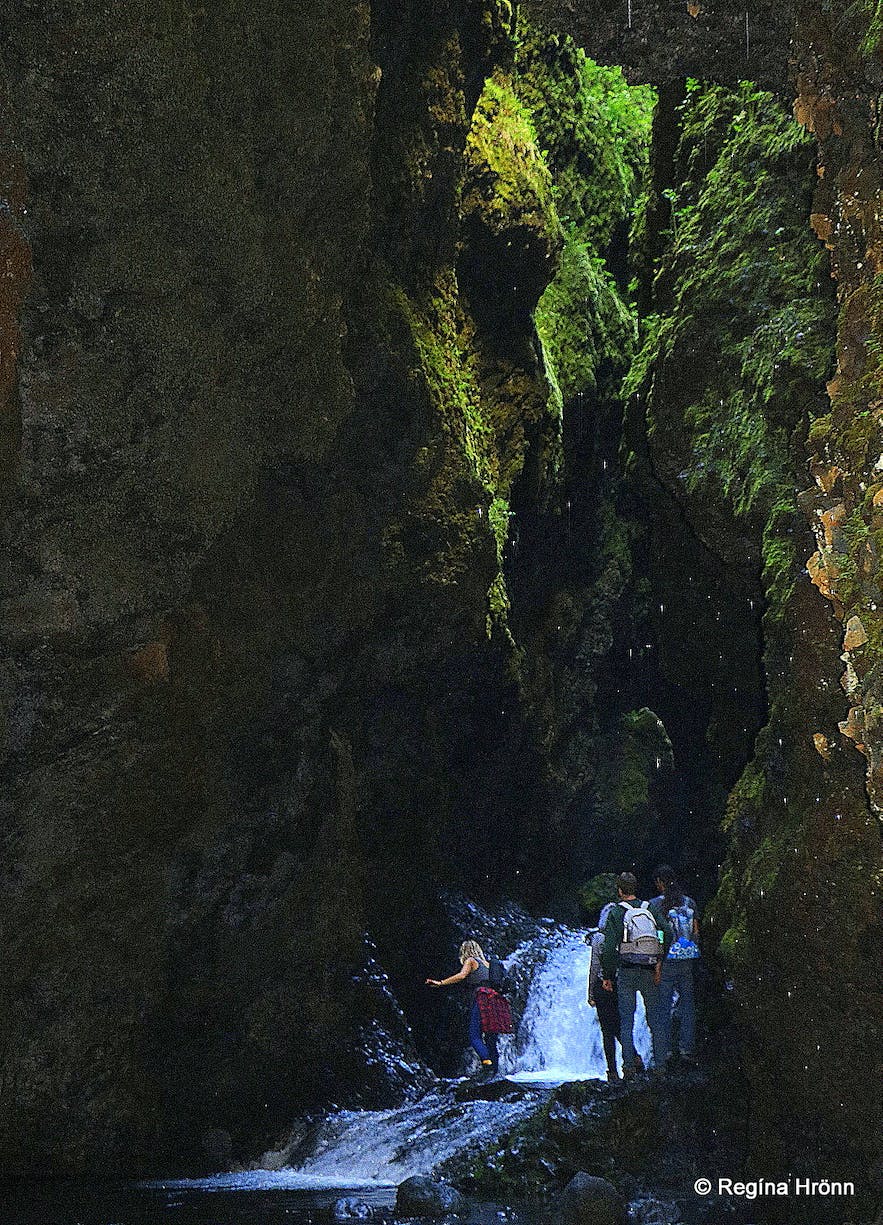 Wear boots as you will have to step on stones in the small shallow river in the ravine and in one spot you will find chains to help with getting up and down a small waterfall (very small), but even though it is small it is difficult going up without the chains.

This is when boots come in very handy as you will also be able to wade the river in parts and don't have to step on the slippery stepping stones. I have also heard that sandals are good for wading the river, but I prefer boots.

It took me some 20 minutes to reach the waterfall with lots of photo-stops on the way. It is a short hike, so if you are not taking a lot of photos I would say that it takes some 35-40 minutes visiting this ravine. It is amazing walking in the ravine with the trees covering the sky above, quite magical. At the end of the ravine, you will be rewarded with a very lovely waterfall and feel like you are alone in nature or that you stepped into a fairy-tale film. I can tell you that I just wanted to stay there, I was completely in awe.  Nature provides us with so much beauty and I love to find hidden away waterfalls like this one.

I felt so peaceful and enthralled, it almost felt like the hidden people of Iceland - the elves would appear by the waterfall at any moment :)

I have read that you can climb up the walls by this waterfall, but if that can be done, then it is not for me.  But there are other waterfalls above, which I would love to visit. 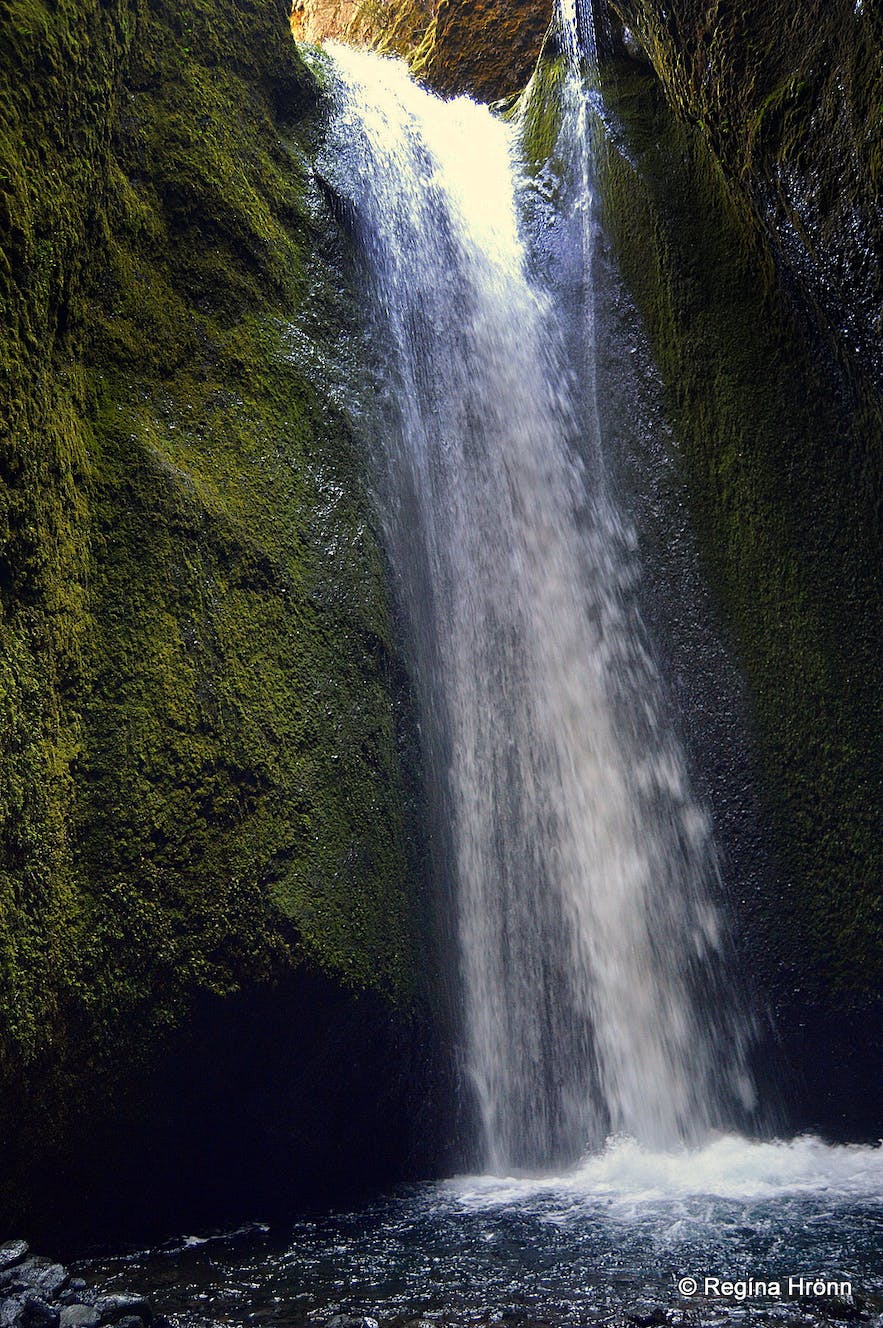 There was mist by the waterfall and I got drenched when my husband took my photos in front of it. He took his time while I was standing there getting drenched. Guard your lens while taking photos, it is only possible to take 2-3 photos before the lens gets too wet.

We stayed by the waterfall for some time before heading back. It was easier descending the small waterfall and I didn't use the chains but slid down it seeing that I was already soaking wet ;) My husband took his shoes off while descending and carried them on his shoulder (photo below). 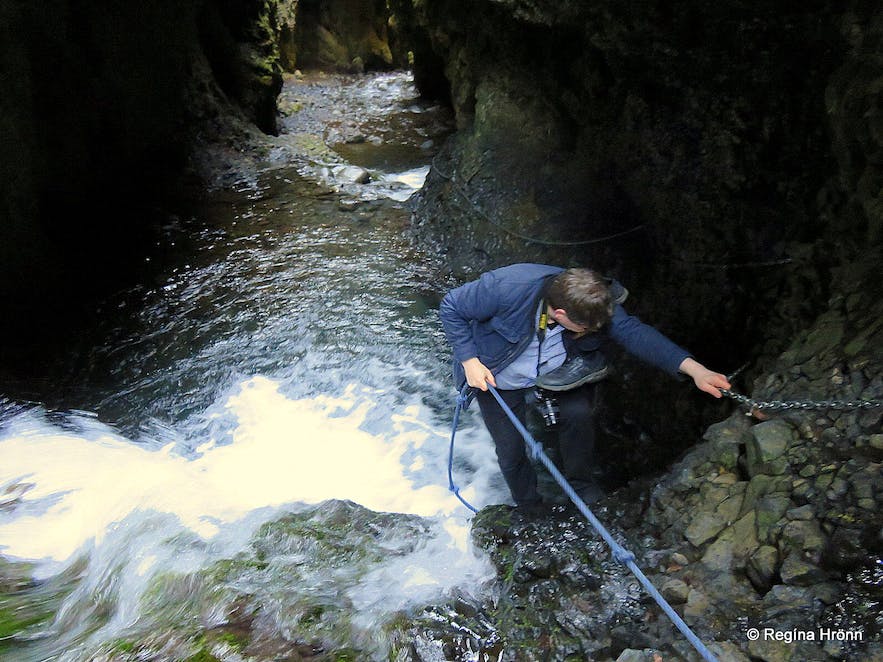 Now let's go back to the rowans which are so characteristic of Nauthúsagil ravine. The main trunk of the rowan tree was said to be the largest in Iceland and when it was measured in 1930 its trunk was said to be 1.5 in diameter and around 9 meters high!

It broke in 1937 and part of the trunk is on display at Skógar Museum. The tree was analyzed and turned out to be no less than 90 years old! There aren't many trees in the nature of Iceland, so this is amazing for Iceland. 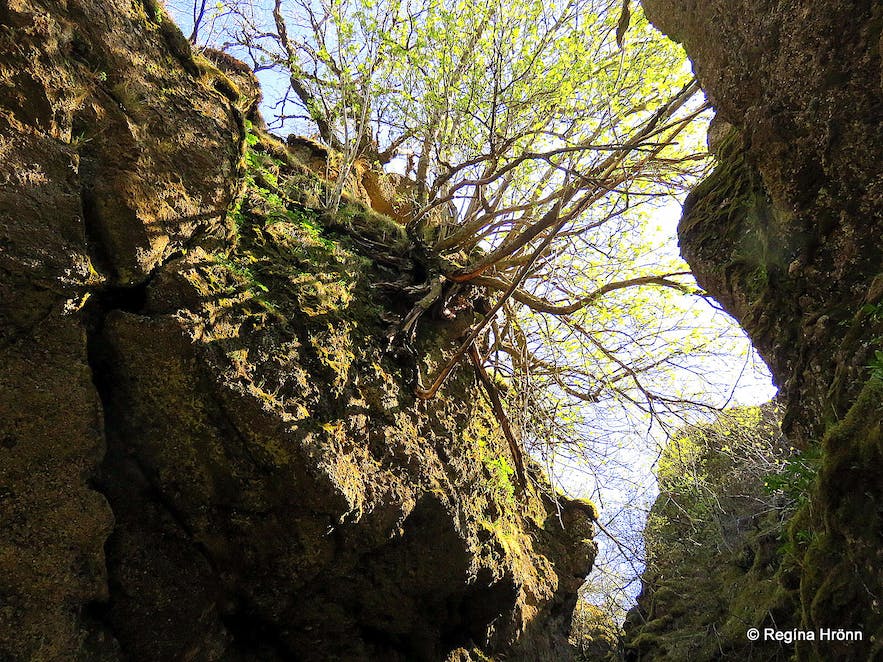 The old rowan was said to be holy and bad luck would follow those who would cut it down.  One of the explanations for the rowan growing to such a big size is that sheep had made a shelter by its roots so the rowan got a lot of nourishment.

In 1900 the farmer at Múlakot in Fljótshlíð north of Nauthúsagil took some rowan from the ravine and gave to his sister. She cultivated a private ornamental garden, which became famous in Iceland for its beauty. You can see parts of it in my photo below, which I took when I was visiting the beautiful Gluggafoss waterfall. In the distance, you will see the notorious volcano Eyjafjallajökull.

And somewhere below the volcano, Nauthúsagil ravine is hidden away. A path has been made above Nauthúsagil ravine where one can walk and have a look at the ravine from above. Further, in the distance, you will find a tall and majestic waterfall which I must hike to on my next visit to this area.

The folklore of the brothers of Nauthús

Once upon a time three brothers and their sister lived at the Nauthús farm (abandoned in 1777).  Two of the brothers were ribalds, but the third one was a good man. To cut a long story short the ribalds ended up murdering their good brother.  After the murder of her only good brother the sister fled to Stóridalur valley and got engaged to the farmer there.

This match was not to the liking of the ribalds and they swore to kill the farmer at Stóridalur. Once in the wintertime, as the farmer of Stóridalur was rounding up his sheep and drove the sheep out to Merkurengi meadow there was an ice channel (the deepest part of the river had no ice) in Markarfljót river. The ribalds lunged at the farmer so he had to retreat into the river. The brothers followed him and drowned.  The farmer of Stóridalur was, on the other hand, not harmed.

There were few people at Nauthús farm for the rest of the winter, but those few who stayed felt the presence of the brothers. Next spring the sister asked her relative to move to Nauthús farm. The following summer nothing of importance happened until the nights started getting dark again (but in the summertime in Iceland the nights are bright for the first part of the summer) - then the haunting started!

The farmer at Nauthús asked the farmer at Stóridalur for help and he came to Nauthús farm one evening and stayed for the night. That night nothing happened but at daybreak, his farmhand came to Nauthús and told him that there had been excessive haunting at Stóridalur that night. The following night the ghosts again haunted Nauthús.  The same thing happened for the rest of the week that the ghosts haunted the farm every night. 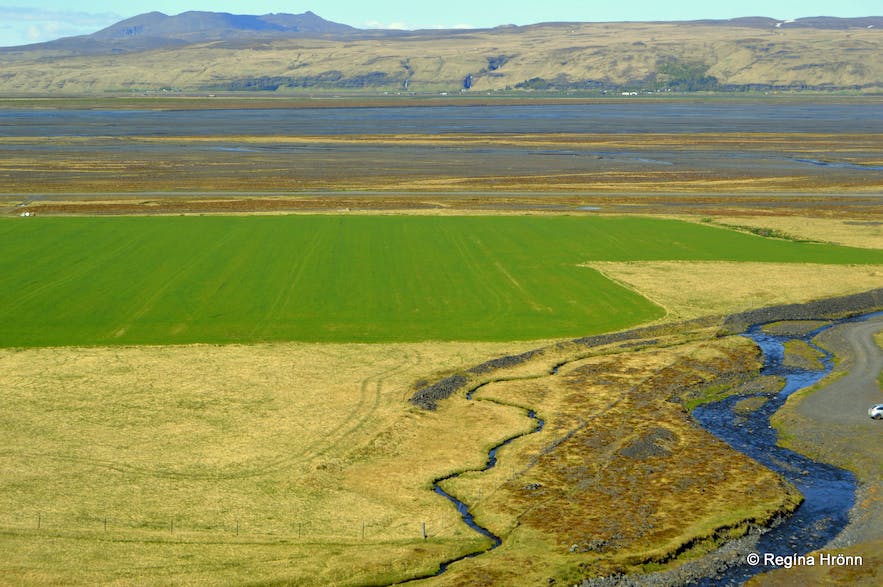 The farmer at Stóridalur was the trustee of the Stóridalur church.  One night when he was alone in the church one of the ghosts appeared behind him. The farmer asked the ghost not to kill him yet and told him that a girl in Mörk (Stóramörk) was carrying his child and that child would revenge him.  So the ghost should kill her the following night and him as well. The ghost agreed to this deal and left. 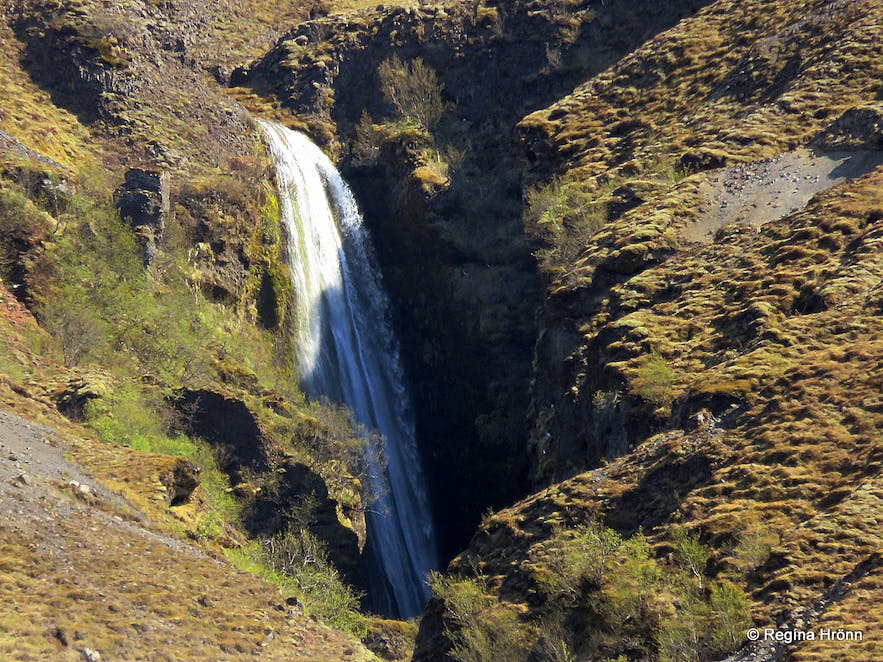 This cross was on the church floor for the longest time and the ghost was never seen again. The ghosts who are forced into the floor or ground can't reemerge, but on the same spot, they sank. The other ghost went berserk and played havoc on the farm that night and the following nights so the farmer had to flee his farm.

The Nauthús farm has been abandoned ever since and is still believed to be haunted.  I, fortunately, didn't feel any presence of ghosts in the ravine, just happiness for being in such a beautiful place :) 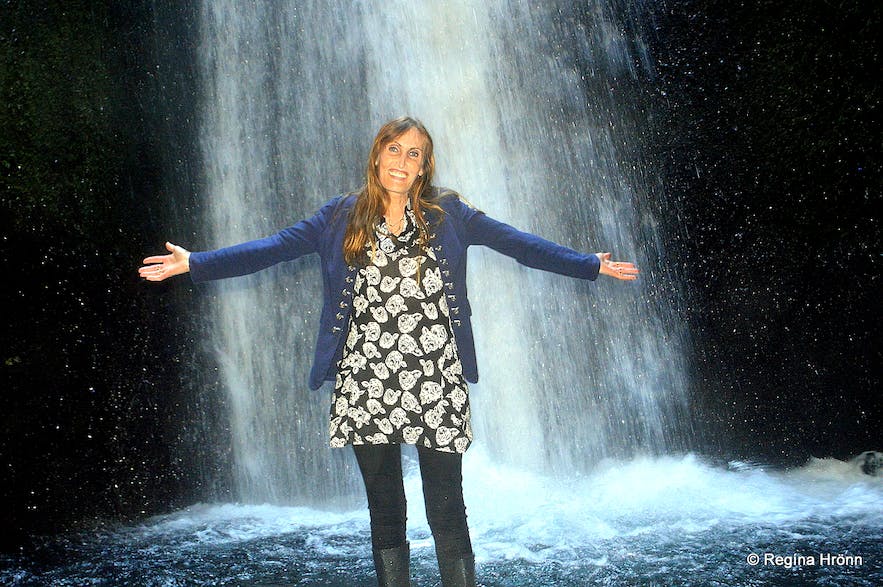 The road becomes a gravel road and changes into F-249, meaning a mountain road, but the rivers to cross are further on in the direction of Þórsmörk. It is ok to drive to Nauthúsagil for the first part of F-249 in the summertime.

Turn right for Nauthúsagil onto another gravel road and drive the short distance up to a couple of parking places or leave your car by the end of the road and walk to the ravine. 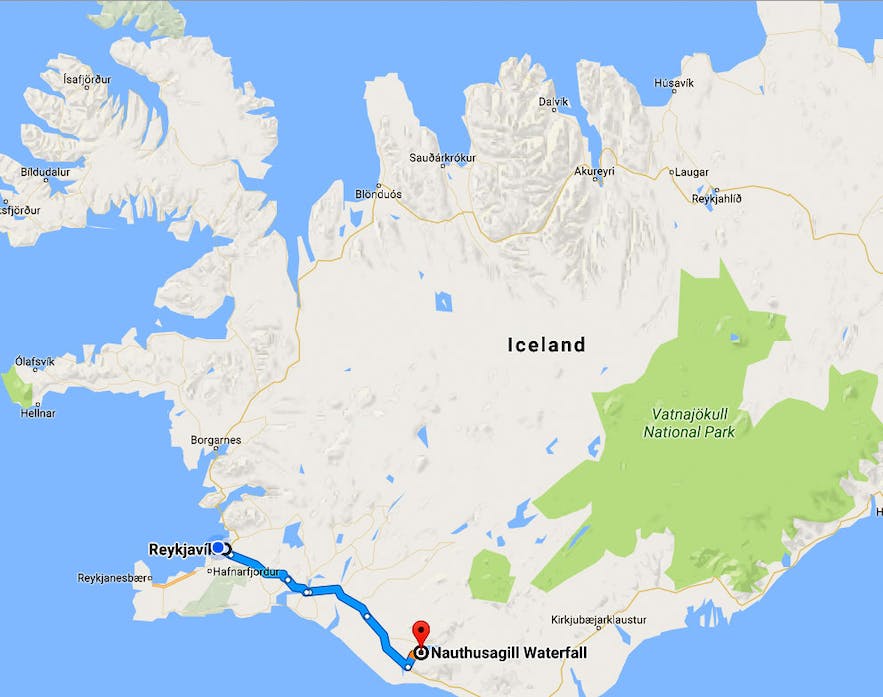 You can also join the guided tour Thorsmork Valley | Super Jeep Day Tour, where Nauthúsagil, the magnificent Stakkholtsgjá canyon and Þórsmörk valley are visited on a day tour. I have written a travel-blog on that day-tour:

Also check out the myriad of interesting guided tours of the south-coast of Iceland.

Have a lovely time visiting the mystical Nauthúsagil gorge:)