Álfaborg - the City of the Elves is the name of a rock in East-Iceland. This majestic rock resembles a natural fortress. It is located in the middle of the mouth of the fjord called Borgarfjörður-Eystri or Borgarfjörður in the East.

The rock is located in moor and the fjord gets its name from this rock. On top of the rock, there is gravel plain and grass and a very easy hike to the top.

The rock is called Álfaborg or the City of the Elves as it was a common belief that the rock was the manor of the highest-ranking amongst the elves, such as chieftains and the King and Queen of the elves in East-Iceland. In this area, it is believed to be a myriad of elves.

Borghildur - the Queen of the City of the Elves

It was/is also a common belief that the church of the elves in East-Iceland was located at the front of a narrow valley, which is close to Borgarfjörður fjord and is called Kækjudalur valley.

There is a rock there, which looks like a church and it is called Kirkjusteinn or Church Rock. Icelanders often noticed the elves riding on horses to what seemed to be their church in that valley.

It is believed that the Queen of the elves of East-Iceland, Borghildur, resides in Álfaborg!

This folklore is told in Þjóðsögur Jóns Árnasonar - the Collection of Folklore of Jón Árnason:

"Jökulsá is the name of the next farm in front of Álfaborg on the same side of the Fjarðará river. Once upon a time, the farmer at Jökulsá had a hired woman whose name was Guðrún. One Sunday in the summertime the entire household at Jökulsá farm went to church at Desjarmýri, except the hired woman, she stayed home alone.

Her mistress asked her to skim the milk and churn the butter after she had round up the sheep and milked the ewes. Then the household went to church and the girl set off to round up the sheep. She milked the ewes and let them loose on the sandbanks below the farm. She then started cooking dinner and when she had finished her chores she went outside and looked around for the ewes and other things in sight.

All of a sudden she saw a great number of people riding along the path below the field of the farm. There were many men wearing colourful clothes, riding on spirited, splendid horses. The hired woman was taken aback, as everybody should have left for church earlier and she was wondering why these people were leaving for church so late.

All these people rode by the farm, apart from one woman who rode up the field to the farmyard. This woman was of noble countenance and looked well, although she was elderly. She greeted the girl and said: "Give me some buttermilk to drink, my girl.". The hired woman ran inside, filled a wooden jug with buttermilk, and brought it out to the elderly woman.

When the woman had drunk enough from the jug and replaced the lid, the girl saw that she reached into her bosom, took a beautiful linen cloth, placed it over the jug's lid, and gave it to the hired woman and thanked her. Then the girl asked a third time: "What is your name?". "Borghildur is my name, my nosy girl," the woman said as she struck her horse with her whip and rode away from the farm and caught up with the rest of the people.

The hired woman watched them and the last thing she saw of them was that they rode behind a grey rock at the edge of the so-called Kollutungur; which leads to Kækjudalur valley.

Time passed until the farm people returned from church in the evening. The hired woman then told them what had happened to her during the day and showed the people the cloth which had been given to her. It was so beautiful that nobody had ever seen such fine cloth.

The story goes that this fine cloth has been passed back and forth among the noblest ladies of Iceland through the ages. But the riders seen by the hired woman were believed to have been elves from Álfaborg on their way to church in Kækjudalur".

Other legends exist about encounters with elves of Álfaborg and in this area. One of them is the story of a young girl from the same farm as in the legend above, who married a man (an elf) living in Álfaborg.

It is easy to climb to the top of Álfaborg and there is an amazing view from the top, of the sea and the beautiful mountains of Borgarfjörður-Eystri. You will find a view-dial on top pointing to the main points of interest in this area. 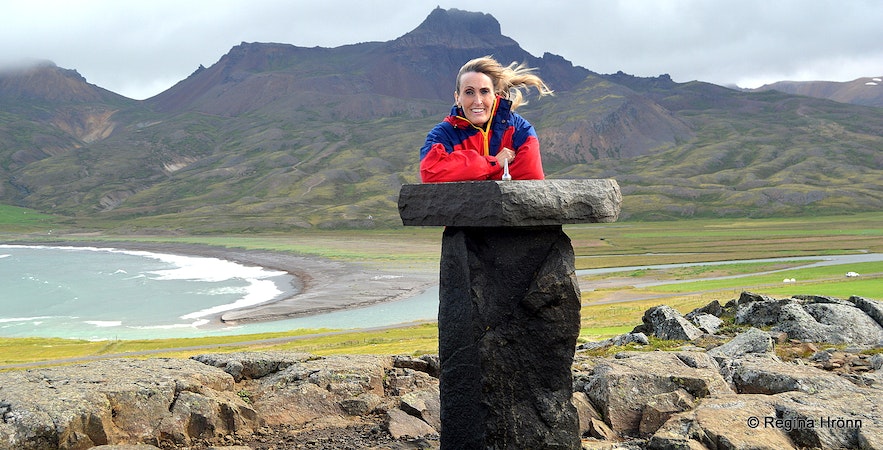 I am on the look-out for view-dials on my travels in my country as my father-in-law is the main designer of view-dials in Iceland (not this one though).

I have found quite a few of them, but some of them are located high up on mountains and are difficult to get to - I guess I will skip those as I am not good at serious hiking ;) 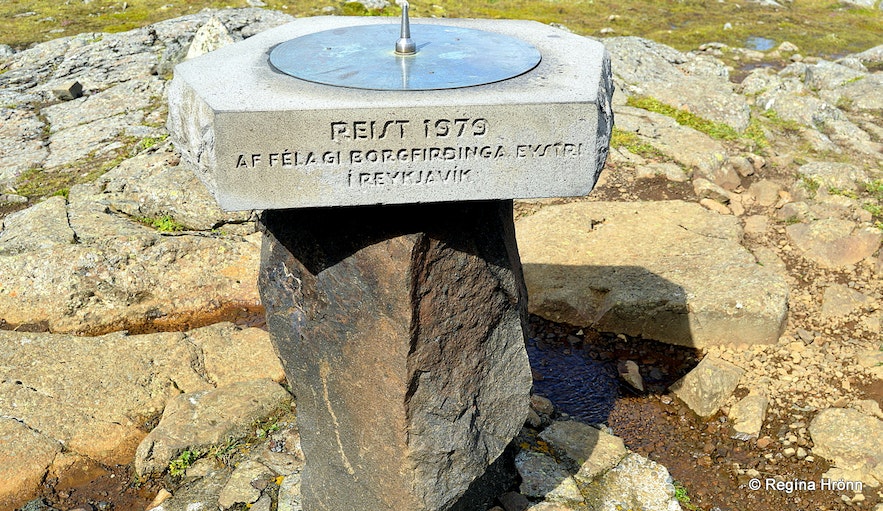 The view-dial on top of Álfaborg was erected in 1979 by Félag Borgfirðinga eystri í Reykjavík and designed by Hörður Björnsson. It shows the names and height of the surrounding mountains and also acts as a sundial.

It was extremely windy when I visited and I could barely stand on my feet on top of Álfaborg! 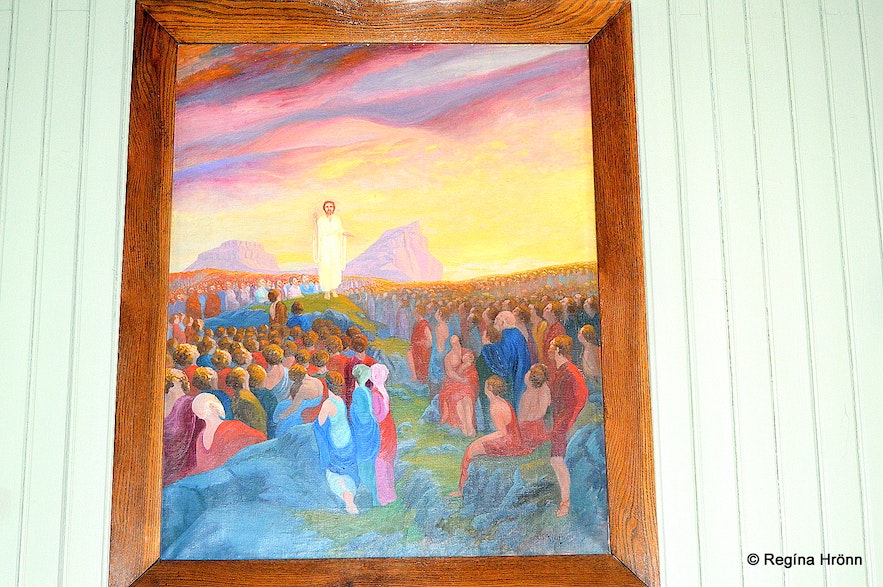 The altarpiece by Jóhannes Kjarval in Bakkagerðiskirkja church

The local church, Bakkagerðiskirkja, is located next to Álfaborg. Its altarpiece is one of the most remarkable altarpieces in Iceland, painted in 1914 by Iceland's most noted painter, Jóhannes Sveinsson Kjarval, who grew up in this area.

The altarpiece depicts Christ delivering the Sermon on the Mount - from the top of Álfaborg! I will be writing about Kjarval in another travel-blog. 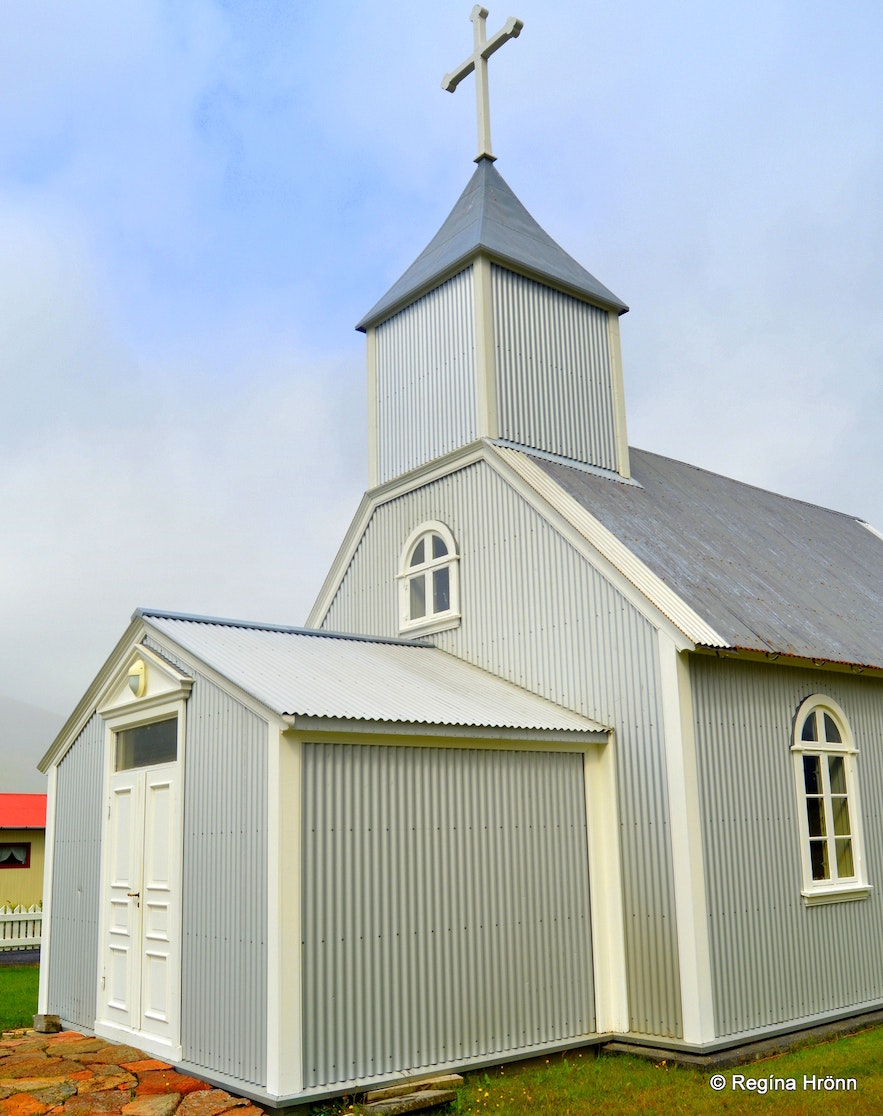 In the summer of 1898 talks started about moving the church from Desjarmýri to Bakkagerði. The church at Desjarmýri was built in 1860 and it was in a sad state after being struck by a storm.

In 1901 a new church was consecrated at Bakkagerði next to Álfaborg.

Álfaborg is now preserved. The elves allow people to visit their habitats as long as we show respect there and don't fool around or yell and laugh. So let's treat Álfaborg - the City of the Elves - with the utmost respect :)

To visit this area you can rent a car in Reykjavík and drive to the East-Iceland. 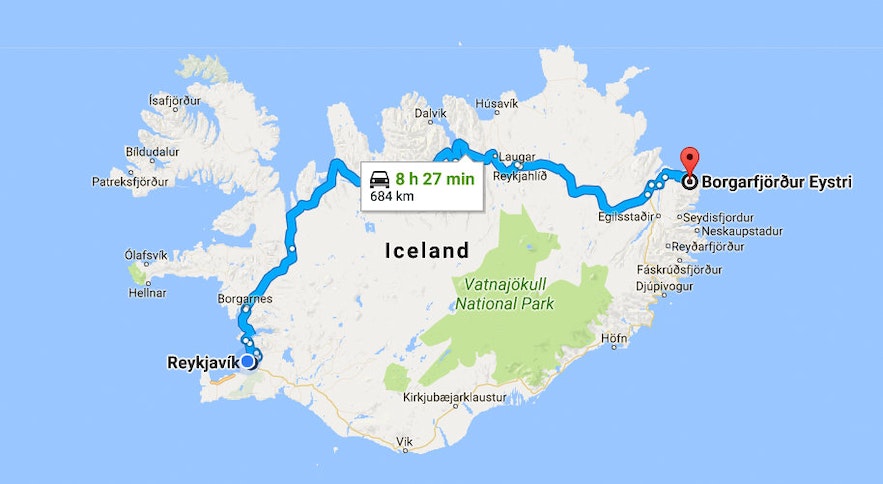 I have written other travel-blogs about Borgarfjörður-Eystri as in the lovely little village of Bakkagerði you will find a beautiful red-painted turf house :) And on the way to Bakkagerði, you will pass the dangerous Njarðvíkurskriður screes, where you will find a big wooden cross by the road.

You will also pass by the beautiful gorge Innra-Hvannagil. You can find out more in my travel-blogs: