Njarðvíkurskriður Screes and the Monster Naddi in East-Iceland - Icelandic Folklore 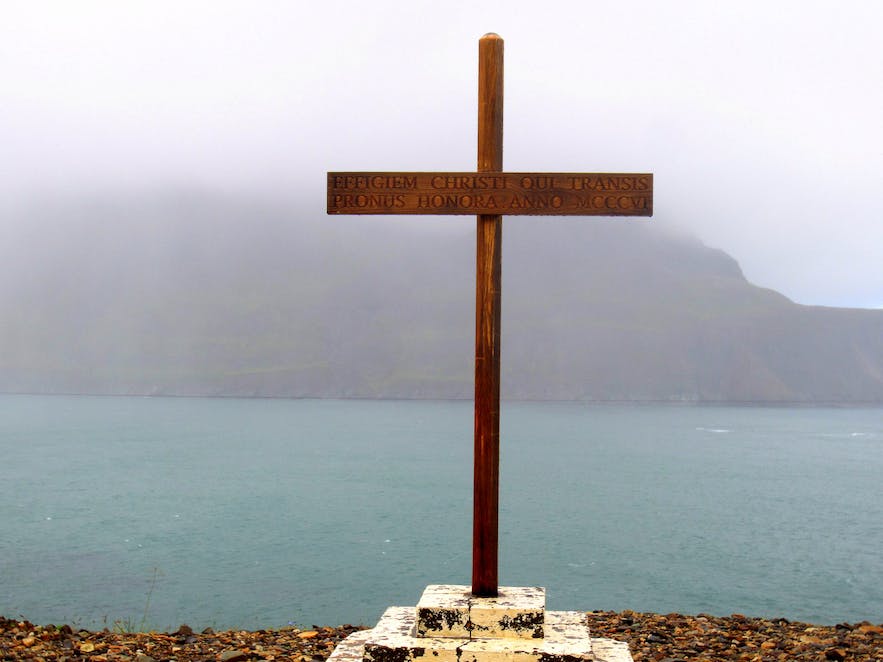 A big wooden cross stands tall by the road leading from Njarðvík to Bakkagerði in Borgarfjörður-Eystri in East-Iceland.  A gravel road leads way up in the mountain and by a curve in the road you will find the big cross.

A road passable for cars was opened here in 1950, but before that time people could only travel between these two places on foot or riding on horseback It was a dangerous route mainly because of falling rocks, mudslide and avalanches. But not only because of the landslide... 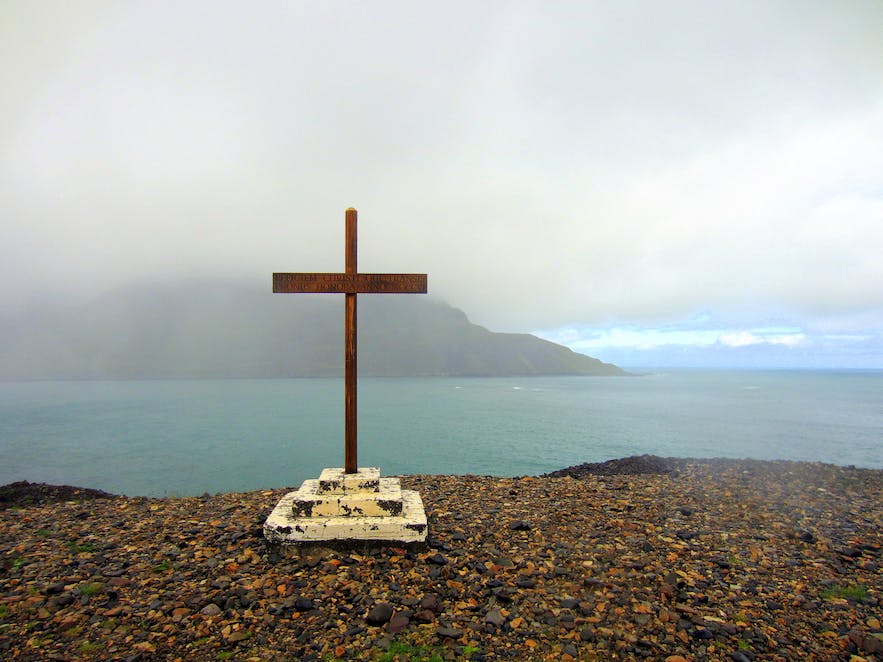 This place is called Njarðvíkurskriður or the Screes of Njarðvík. By the foothill of the screes a monster, called Naddi, lived in a cave in a gully. The monster was in the image of a man above the waist and an animal below the waist. This monster ambushed travellers, mainly after dark, attacked them and killed some of them. Finally, a farmer was able to kill Naddi and the monster fell into the ocean.

After Naddi was killed the farmer erected a big cross in the screes and a cross has been there since ca 1306 (not known for sure), for the protection of travellers. The cross was last renewed in 1954.

There is an inscription in Latin on the cross EFFIGIEM CHRISTI QUI TRANSIS PRONUS HONORA: ANNO MCCCVI, which has been translated into a poem in Icelandic: "Þú sem að framhjá fer fram fall í þessum reit. Og Kristí ímynd hér auðmjúkur lotning veit. Anno MCCCVI (1306)". Translated into English it goes something like this: "You who pass through here, fall down on your knees in front of the cross on this spot. And humbly show the sign of Christ reverence". 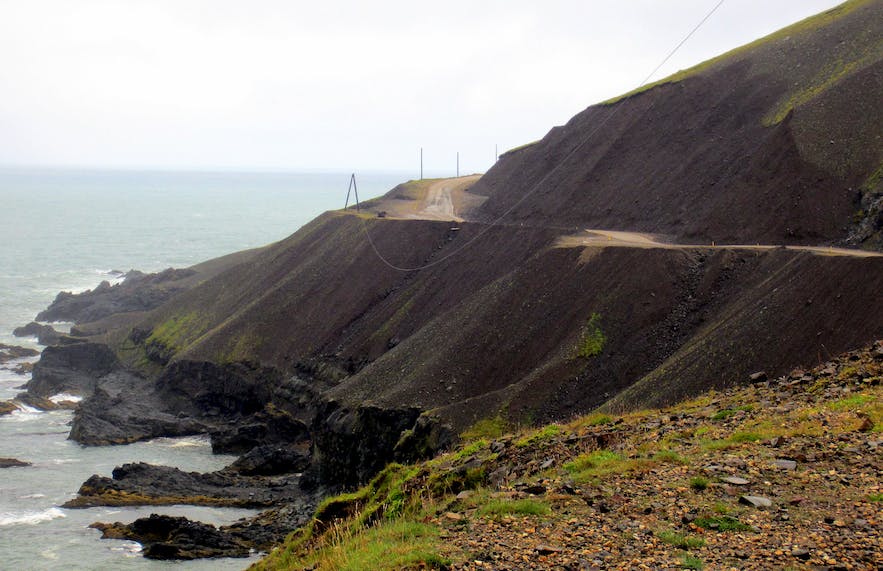 The folklore on Naddi in Þjóðsögur Jóns Árnasonar - the Folklore of Jón Árnason goes like this:

"While the descendants of Bjarni skafin were alive, the ancient road between Njarðvík and Borgarfjörður over the Njarðvikurskriður screes, ceased being used, as a monster in the image of a man above waist and an animal below waist ambushed travellers on the road and attacked and killed several men after dark, so this road became impassable.

This monster lived in a gully on the Njarðvíkur side of the screes, named Naddagil gully. So-called as in the evening in autumn and winter time it sounded like something was pecking and clattering on the rocks by Njarðvík; thus the monster was called Naddi (from the old Icelandic verb "nadda" which means to peck). 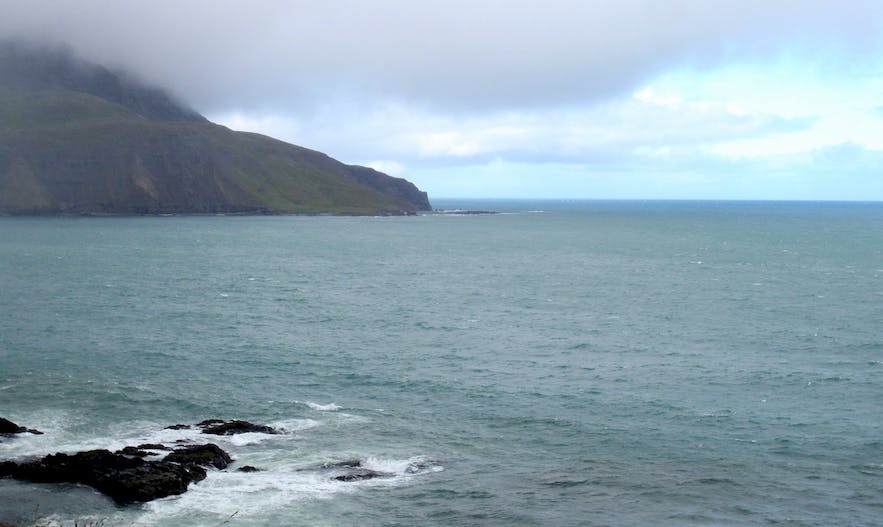 Once late autumn Jón Bjarnason arrived late at night at Snotrunes, a farm in Borgarfjörður, on his way to Njarðvík. But as it was nightfall already, the household begged him not to put himself in danger by passing Njarðvíkur screes so late. But he didn't listen to them, told them that he would not be harmed in any way and carried on up to the screes.

As he arrived in the gully, he met the monster which attacked him. They fought a long and fierce battle. The fight carried over to the edge of Krossjaðar; there Jón said that the monster had pulled itself free and dragged itself into the ocean.

A big cross was erected to mark the spot, and it still stands there, with the inscription in Latin that "passers-by should bow down and read the Lord's Prayer" - this tradition has been respected through the centuries. (This inscription is well known and comes from an ancient Latin poem from Pope Gregory the Great's Book of Letters).

Jón managed to arrive at Njarðvík, very tired and injured, black and blue, and he was bedridden for a month. He managed to recover from this ordeal. Jón thought that the monster had come from the ocean as it dragged itself into the ocean, but the monster was never seen or heard from again after their battle." 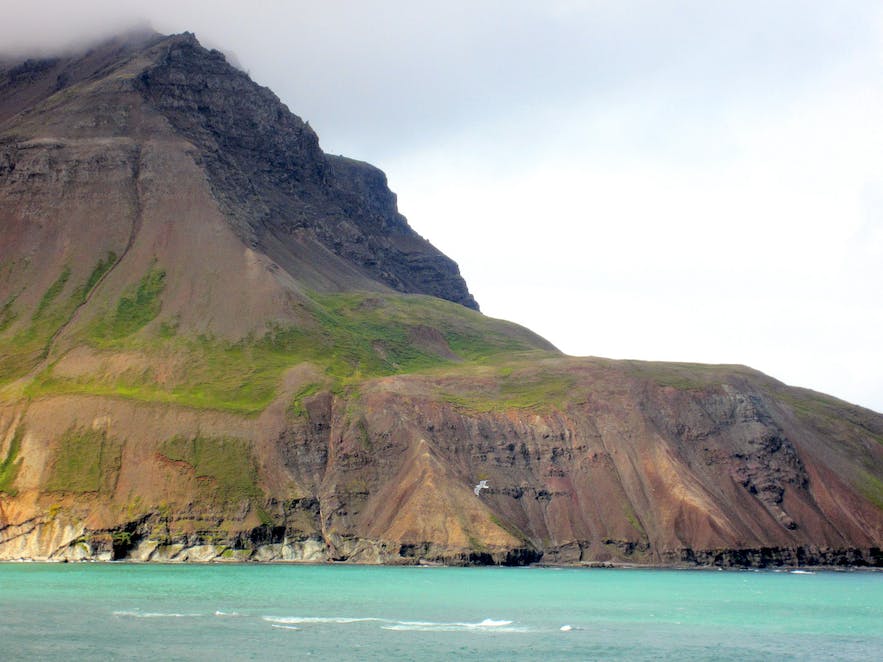 As we passed the screes it became so windy that we could barely stand on our two feet. On our way back we got some sun, but still this heavy wind. The weather in Iceland is really unpredictable and can change in a jiffy. That is why we quote the words of Mark Twain and say: "If you don't like the weather now, just wait a few minutes". 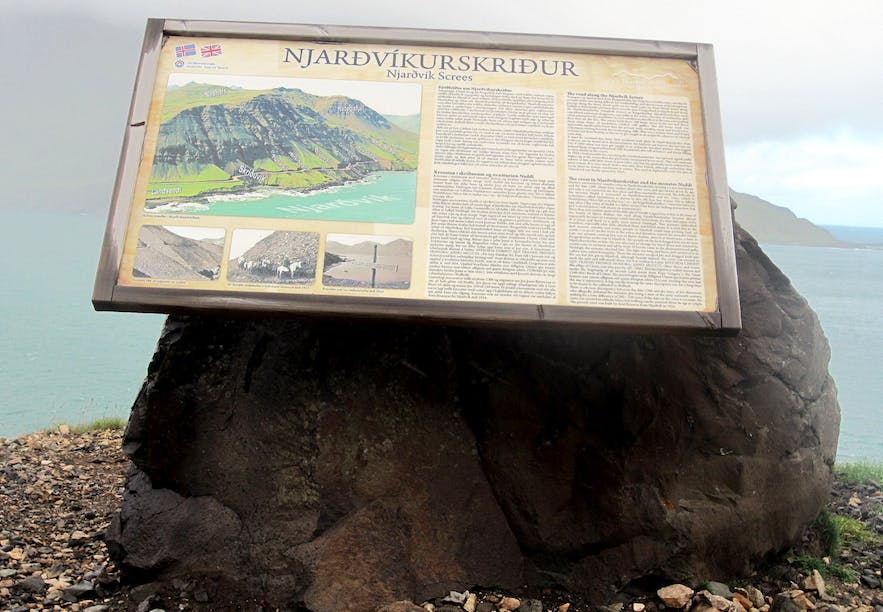 There have been 6 fatal accidents here, that one knows of, probably much more, the last one in 1909, when 2 men were killed in an avalanche here. Also, many horses and sheep have fallen down in the scree.

So if you ever find yourself travelling in this area stop by the wooden cross and say a prayer.

Njarðvikurskriður screes are located at N65° 33' 40.851" W13° 55' 49.042" between Njarðvík and Borgarfjörður-Eystri. Next stop will be the lovely little village Bakkagerði where you will find a cute little red-painted turf house, the residence of the Elf Queen of East-Iceland and a myriad of puffins from April until mid-August!

To reach the Eastfjords you can rent a car in Reykjavík and drive up there in 2-3 days.

There are plenty of interesting stops on the way, so allow yourself plenty of time to reach this location.

Once in the Eastfjords check out these guided tours and self-drive tours. It is always best to be guided by locals, so I recommend the Travel East-Iceland tours: