Djúpivogur Village in East-Iceland and the Eggs at Gleðivík Bay

By the harbour in the lovely little village of Djúpivogur in East-Iceland, you will find a bay called Gleðivík or Merry bay. In that bay, a hidden treasure is to be found - a distinctive outdoor artwork hidden away from sight.

The outside artwork consists of 34 huge granite eggs which represent the eggs of each of the nesting birds in this area, many of which are migrating birds, flying over to Iceland from far away to lay their eggs in Iceland.

The Eggs at Merry bay are made of Chinese granite and imported from China, where the artist Sigurður lives part of the year with his wife. They also own a home in Djúpivogur village called Himnaríki or Heaven.

The granite eggs are all of the same or similar size apart from one, which is much bigger than the others. This distinctive artwork was revealed on the 14th of August 2009 and on the official website of Djúpivogur village you can see photos from the revealing of the eggs. 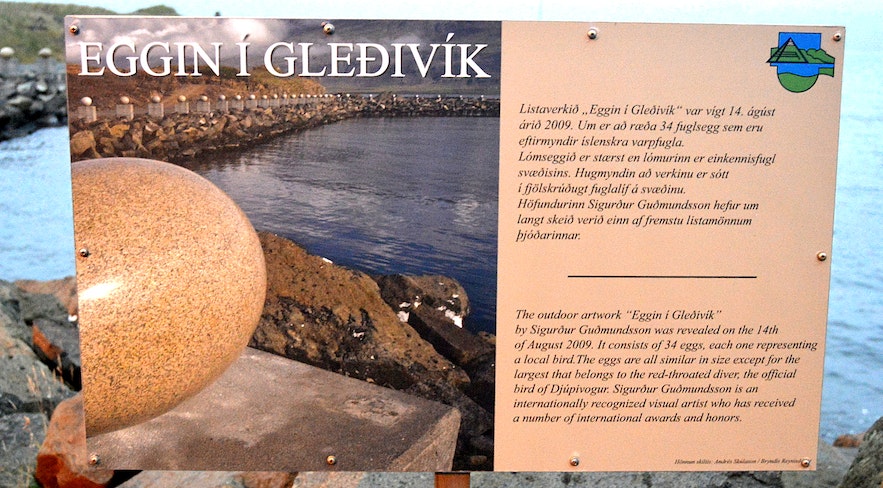 The molten plinths in Merry bay are remnants from the landing of fish by the port.  Here fish was landed and transported by a conduit on the plinths into the rendering of the fish-factory Bræðslan. The old fish factory now hosts an exhibition of contemporary art in the summertime. Times have changed here in the little fishing village of Djúpivogur.

The District Manager of Djúpivogur had been pondering on what could be done with these old plinths, so he consulted the visual artist Sigurður Guðmundsson. Sigurður immediately came up with the idea of the granite eggs and put his idea into action.  He said by the inauguration of his artwork that he had never created such a big artwork in such a short time, but the artwork itself is 200 meters long!

A photo of my last visit to Djúpivogur, again dusk setting in, but brighter than during my first visit

Each one of the 34 eggs is an exact replica of the egg of the bird in question.

The eggs are all different in shape, nuance, and colour. Most of the bird species represented by the eggs are migratory and the best bird-watching time in Iceland is from June to August.

It is such beautiful artwork, eggs represent growth, new beginnings, and the future, and it is amazing how many emotions the Eggs of Merry bay can stir up :) 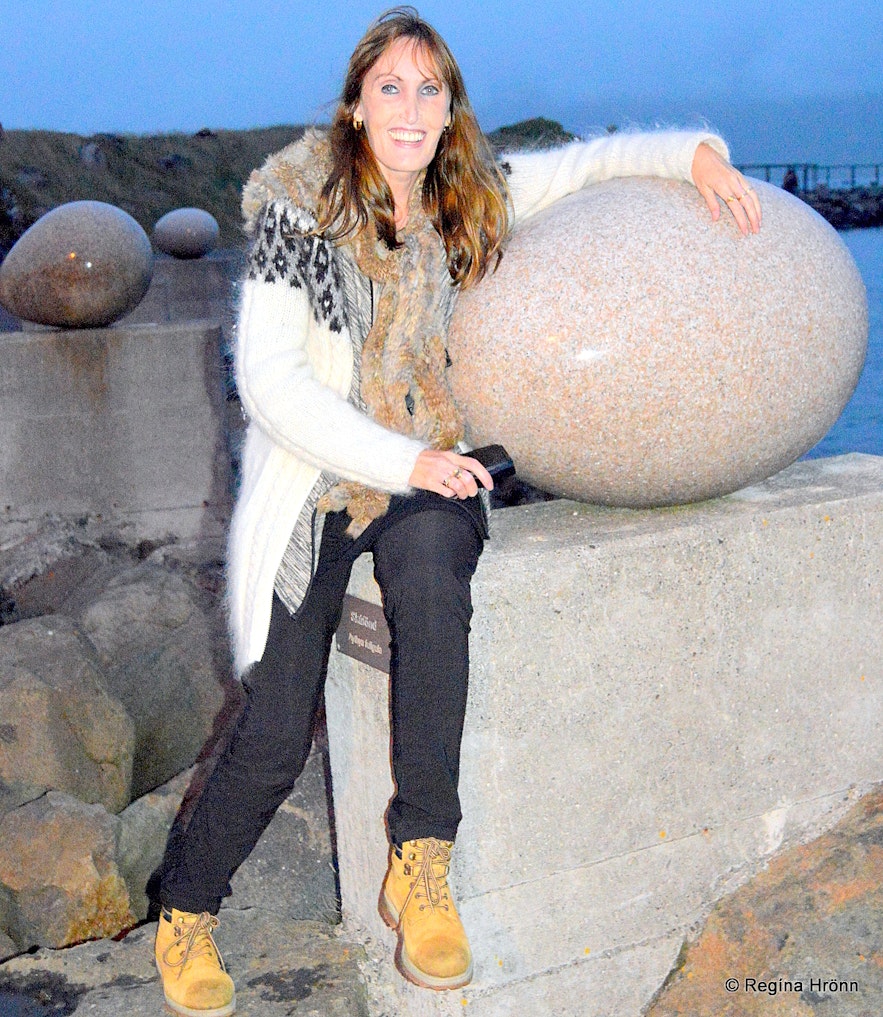 The Eggs of Merry bay have become the main attraction of Djúpivogur and I am sure that one day they will become the symbol of the village.  Small castings of the eggs in a gift box can be bought in Djúpivogur village. I think they would make a lovely gift for bird watchers.

My photos were shot in the twilight on a September night, but I upped the light a bit so the eggs can be seen in the photos.

I add two photos of myself by the eggs so that you can see how big they really are. The biggest one is much bigger than the other ones and represents the egg of the official Djúpivogur bird, lómur, the red-throated diver. 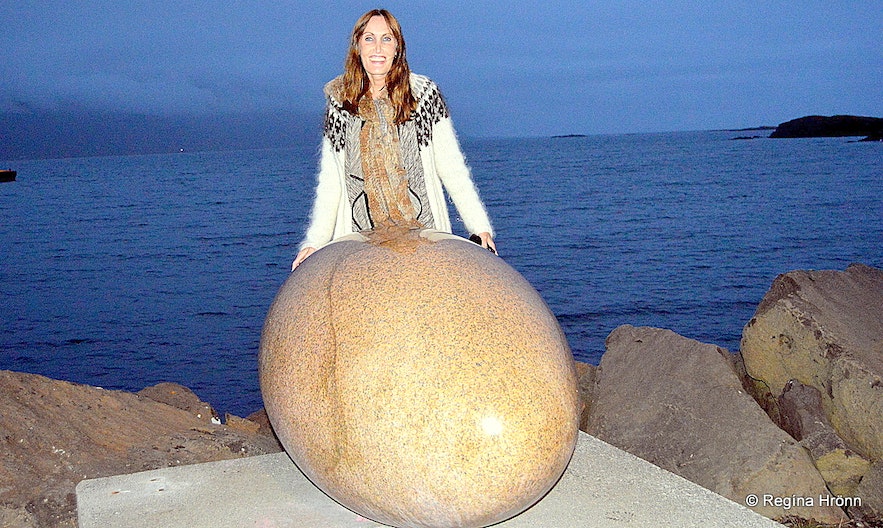 You will find a sign leading to Gleðivík - Merry bay, which is just outside the village, or some 900 meters from the village centre.

There is more to see in Djúpivogur though, but I just wanted to point the eggs out to you as they are hidden away when you enter the village. I would not want you to visit Djúpivogur without seeing these huge eggs of Merry bay.

The latest I heard about the eggs is that there are plans about moving them as a fatal accident took place in Gleðivík bay. 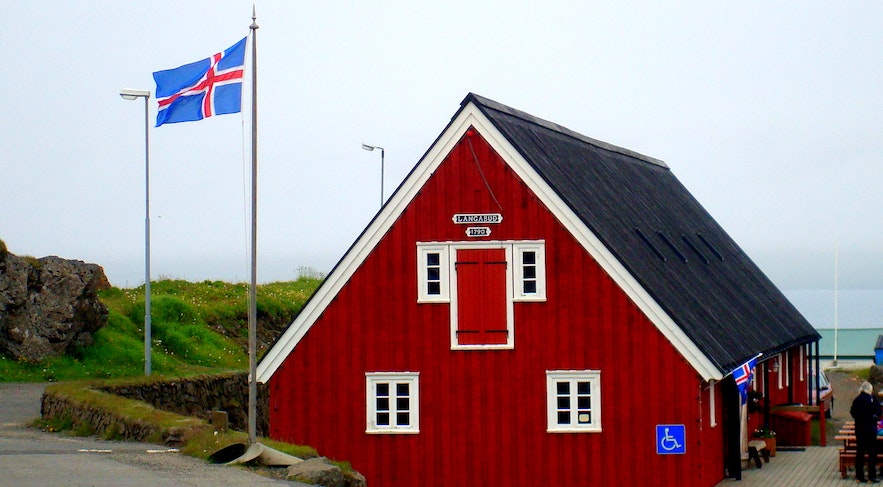 The inhabitants of Djúpivogur are only 454 and fishing, fish processing and tourism are the main industries in this little village. The Cultural Centre of Djúpivogur, located in the beautiful red-painted timber house called Langabúð, hosts a section devoted to the noted sculptor and woodcarver Ríkarður Jónsson (1888-1971).

Langabúð is the oldest house in Djúpivogur, built in 1790 - it is fitting that Ríkarður's memory and work are honoured in the house in which he was born.

Langabúð was built on the ruins of other even older buildings from 1589, but back then German merchants started trading with Djúpivogur. The Danish Trading Monopoly then took over the trading in 1602-1786! 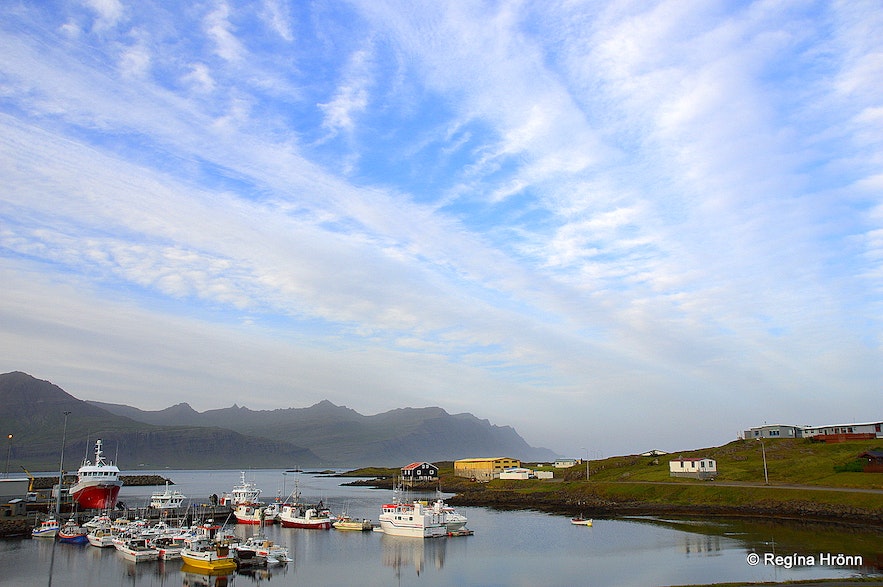 The pyramid-shaped Mt. Búlandstindur (1,069 m) is the landmark of Djúpivogur - we believe that some special powers are at work in this mountain.

Finally, in 2020 I was able to get a decent photo of Mt. Búlandstindur while visiting the distinctive Blábjörg - the Blue cliffs in Berufjörður fjord. 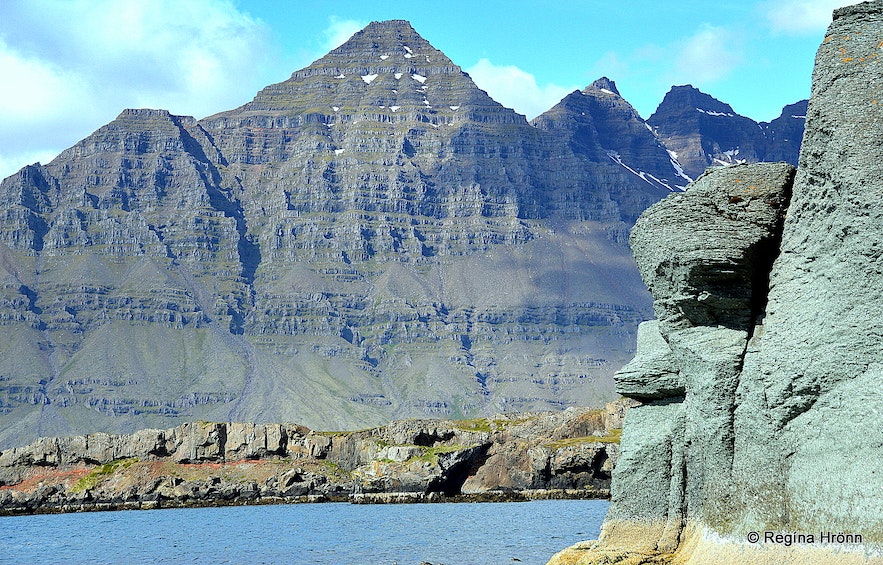 In the summertime, there are daily boat tours to Papey island - the Friar's island, which is named after the Irish monks, who were here in Iceland along with other Irish people (or that is what we think) when the Vikings arrived around year 874.

When the Vikings settled Iceland the monks seem to have left. We don't know the whole story though, but there are some speculations about Irish people having settled in Iceland before the Vikings arrived. 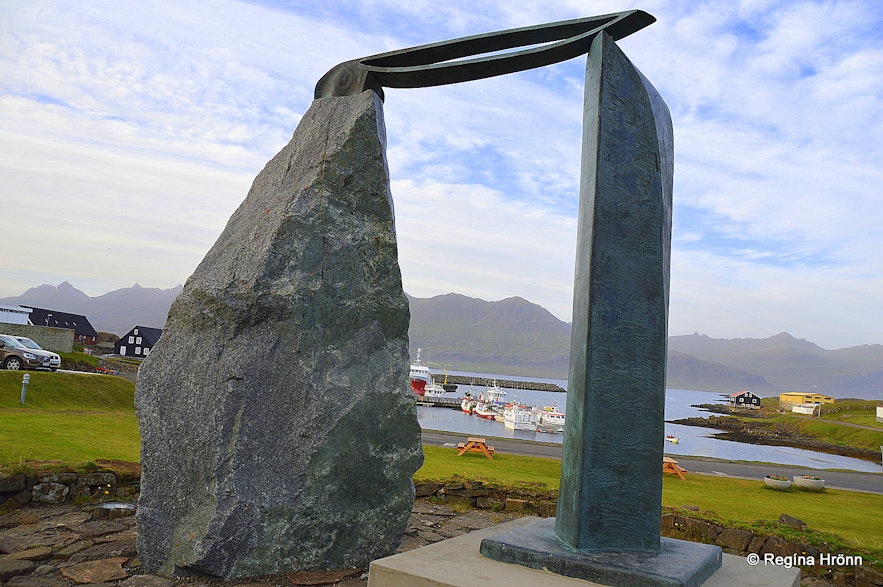 I was young and wanted to save some money so instead of flying to Portugal, my girlfriend and I decided on catching a ride on this freight ship, even though it meant that we would be sailing for 5 days before reaching Portugal ;) 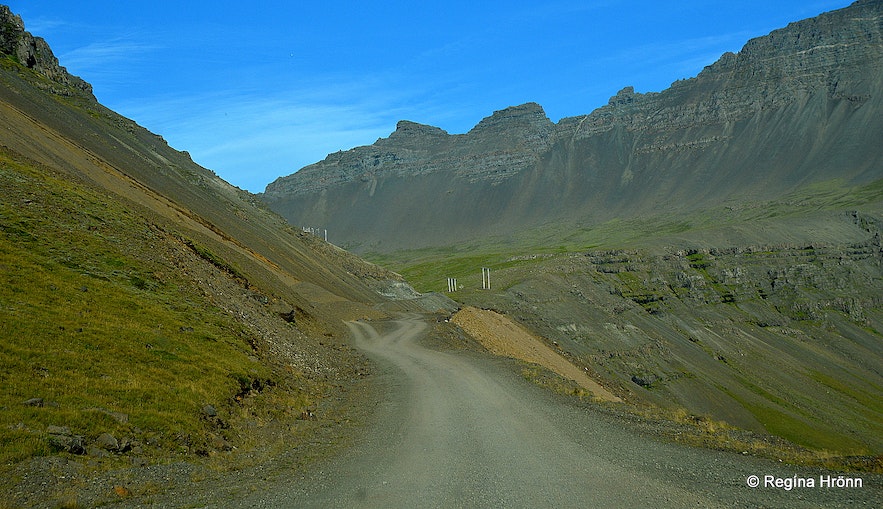 Back then there was no tunnel through the steep Almannaskarð pass from Höfn so we had to drive up the steep mountain.

My girlfriend and I had booked a night at Hotel Höfn and had just gone to sleep when we were awakened by the captain of the freight ship telling us that they were leaving earlier - in the middle of the night to be exact and that he had already sent one of his crew-members to pick us up!

That guy drove up the steep mountain of Almannaskarð pass at a speed of 100 km/hour - scaring the living daylights out of us! 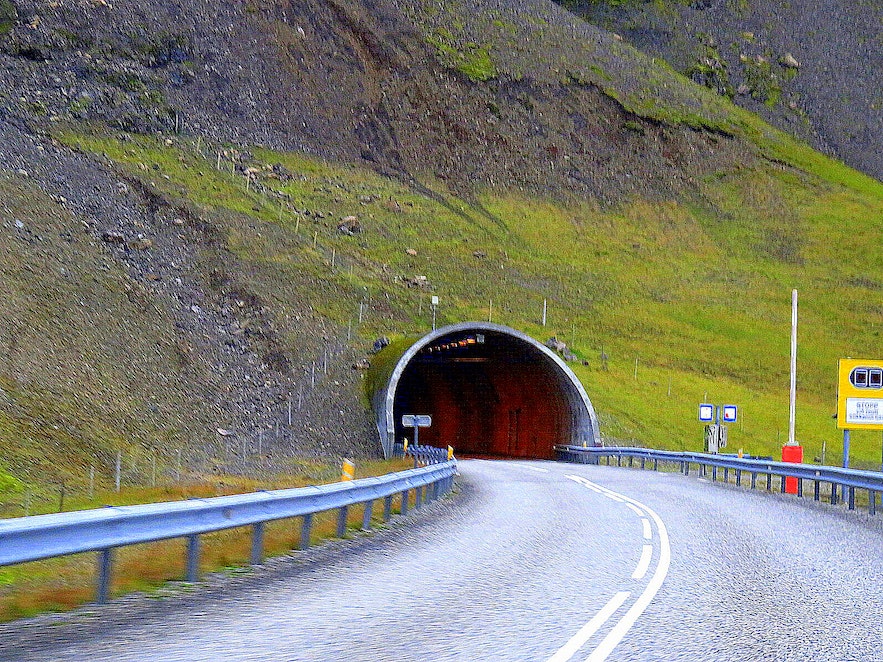 I am very grateful for the 1.3 km long Almannaskarðsgöng tunnel on ring-road 1, which was opened in 2005 leading from just east of the town of Höfn and up to the Eastfjords of Iceland!

Here clouds are blocking the view of Mt. Búlandstindur

Where ever I travel in Iceland I always look for a view-dial, as the making of these view-dials runs in the family, as it were. The chromium-plated view-dial in Djúpivogur was erected in 1997.

It has got a time of three hours (eyktir) and shows the outlines and the names of the surrounding mountains. 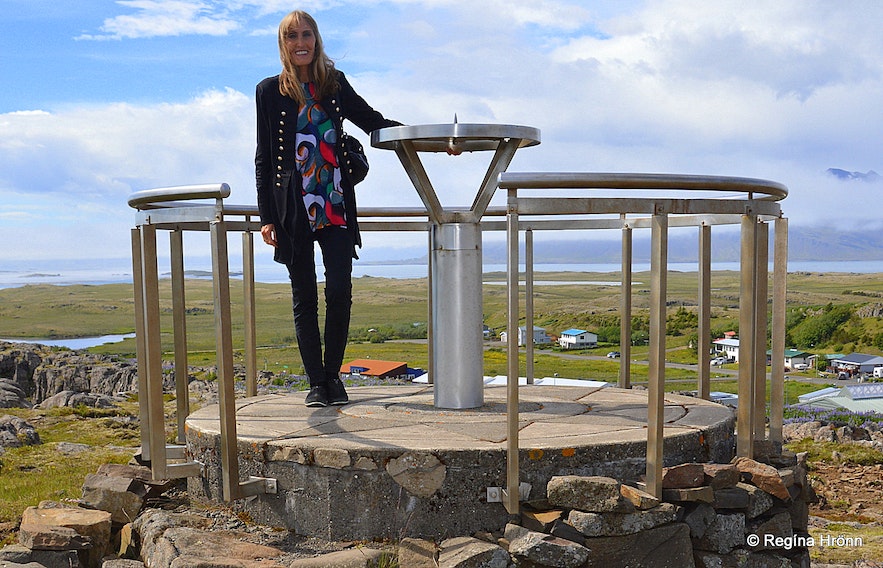 This view-dial was designed by my father-in-law, Jakob Hálfdanarson, and his assistants were Jón Víðis Jakobsson (my husband) and Þórný Björk Jakobsdóttir (my sister-in-law).

The design of the view-dial is so pretty, it is placed on a grid on top of a steel pillar and surrounded by steel railing. The molten base is in the image of a star.

The view-dial in Djúpivogur is located by Bóndavarða from where there is a great view. 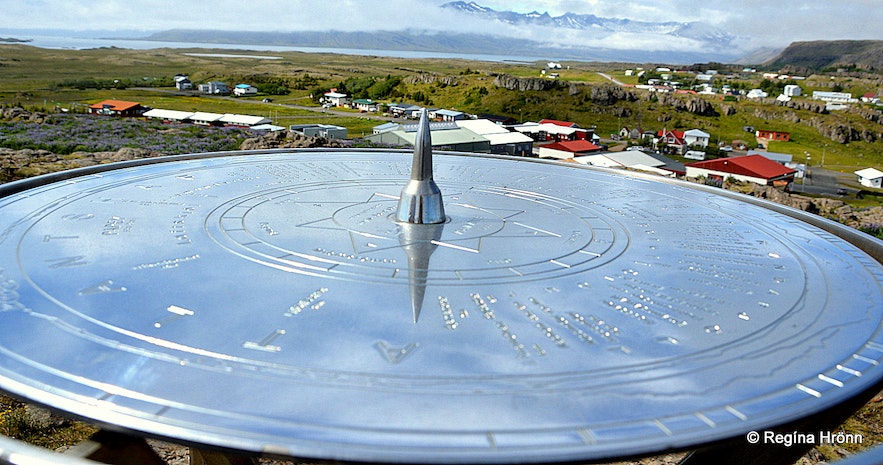 To reach Djúpivogur in East Iceland you can rent a car in Reykjavík and drive for some 554 km from Reykjavík on ring-road 1 or 104 km if you come from the town of Höfn in the south-east.

A sign leads you to Gleðivík from Djúpivogur's centre. The egg sculptures are just outside the village, about 900 m away.

I have written several other travel-blogs about East Iceland if you want to know more about this beautiful part of Iceland:

The Eastfjords of Iceland - the beautiful Fjords in Fjarðabyggð