I sometimes join guided tours in Iceland to show you what they are like, and recently joined one tour to Eyjafjallajökull & South Coast by Activity Iceland.

A month earlier I had joined the same company on a guided tour of the Silver Circle and fell in love with their super jeep and so wanted to try it out again! This jeep is a huge modified Ford 350 EXXL Excursion extra long with 46 inches tires.

Top photo: driving in a super jeep on a black sand beach

The super jeep of Activity Iceland

Tom Cruise, Ben Stiller, Sean Penn, and Dennis Quaid have all been driven around in this super jeep while they were filming in Iceland. You don't go unnoticed when travelling in such a vehicle and where ever we went people were taking photos of the super jeep!

It is a luxurious jeep, with heated seats, Wifi and an Ipad on which we watched clips from Youtube.

One of my favourite trips in my country is visiting the waterfalls in the south; 2 of the best-known are Seljalandsfoss and Skógafoss waterfalls. And both these waterfalls and more were included in this tour. 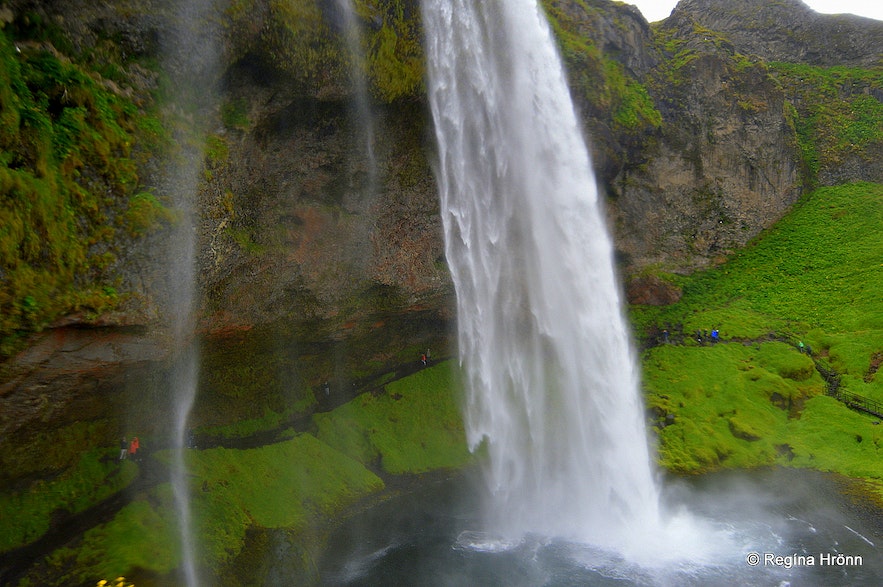 I was picked up at 9 am at Hilton Hotel as usual, and after two technical stops (WC breaks) we visited the beautiful waterfall Seljalandsfoss.

Seljalandsfoss is one of the best-known waterfalls in Iceland, 60 meters high, and it is possible to walk behind it! Bring a raincoat as you will be drenched, but it is so rewarding.

In the wintertime, Seljalandsfoss is all lit up, but the path behind it is closed when it gets too slippery.

After walking behind the waterfall, we carried on our journey towards Eyjafjallajökull glacier. We were actually driving by it, but we wanted to see a glacial tongue of Eyjafjallajökull, called Gígjökull. 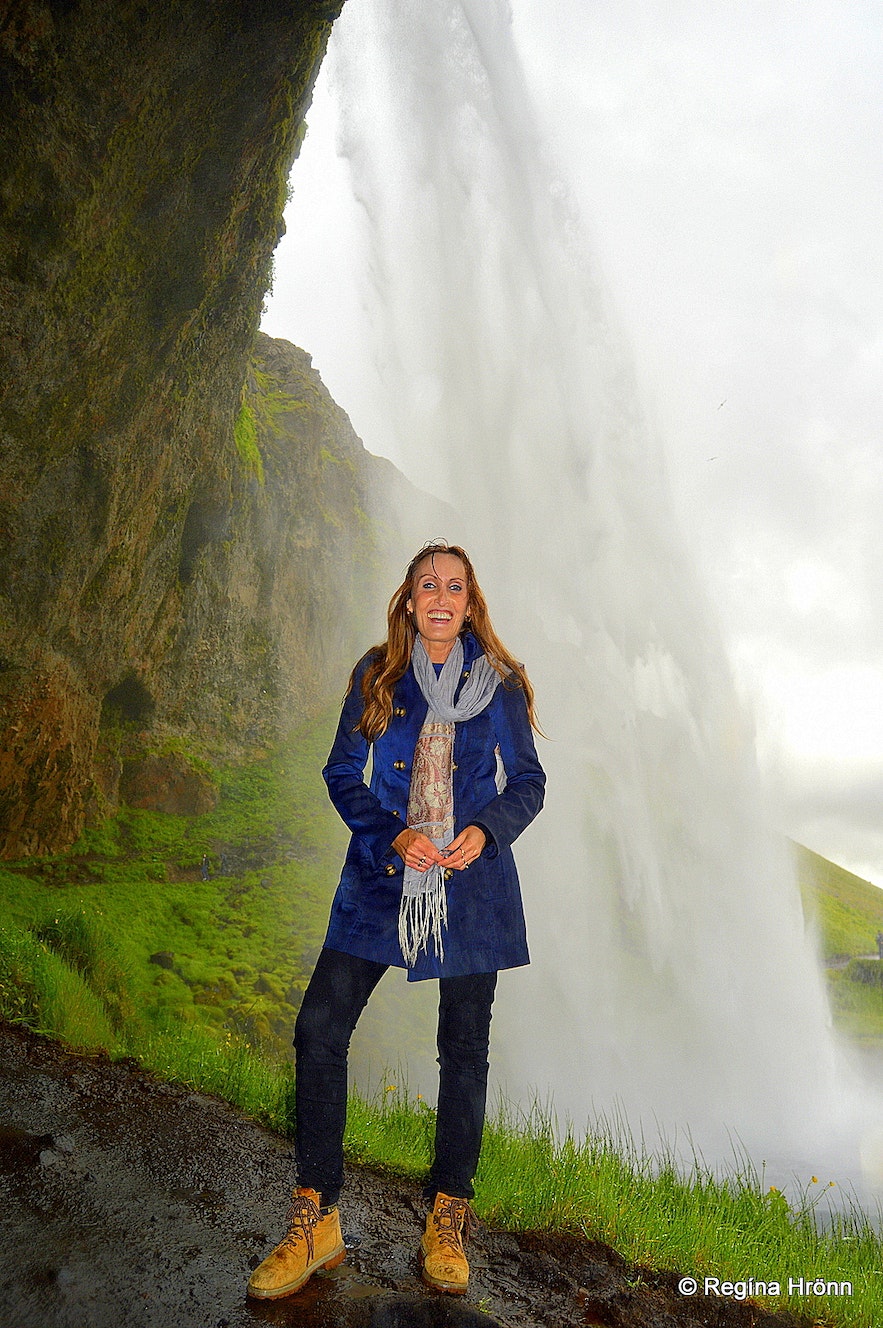 Totally soaked after walking behind Seljalandsfoss

Remember Eyjafjallajökull volcano which erupted in 2010 and spew so much ash in the air that air traffic was affected and more than 140,000 flights were cancelled - along with some 10 million travellers, who were stranded in airports around the world because of this big ash cloud?! 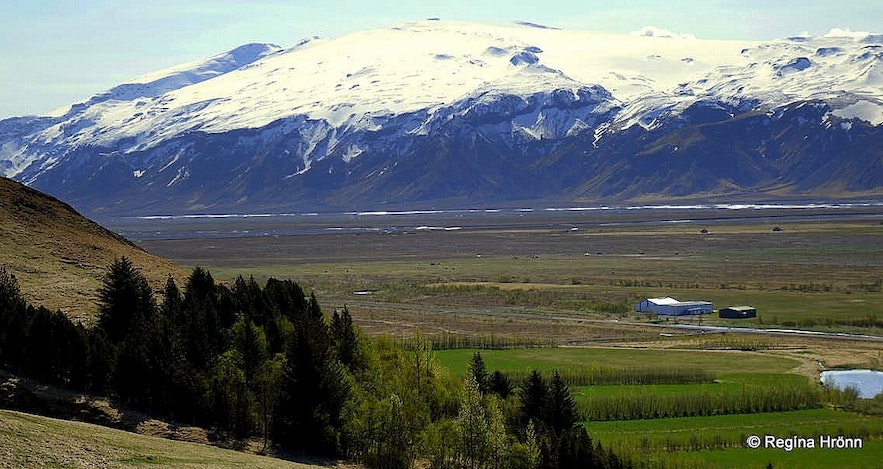 There is a famous film called The Secret Life of Walter Mitty, starring Ben Stiller, who was driven around in this very super jeep during the making of this film in Iceland. In the film, which is filmed entirely in Iceland, apart from the New York scenes, Ben Stiller as Walter Mitty, tries to pronounce Eyjafjallajökull with the same difficulties as the news reporters had - and any foreigner trying to pronounce it for that matter :)

Gísli, the driver-guide, showed us some footage he found on Youtube. It was of news reporters and other foreigners trying to pronounce the complicated name of this volcano - it is hilarious :) If you watch this footage you will also be able to learn how to pronounce Eyjafjallajökull, so it is worth watching it before your visit to Iceland.

A big jeep is needed for crossing the glacial rivers

We drove in the direction of Þórsmörk and crossed several rivers, both glacial and fresh water on our way to Gígjökull glacier, which is one of the glacial tongues of Eyjafjallajökull. The volcanic eruption in Eyjafjallajökull was very close to Gígjökull. It was a breeze crossing these rivers in such a big jeep with such huge tires.

Obviously, a big jeep is needed to cross these rivers, so never try to cross them in a 2WD.

It had been beautifully sunny, but as we reached Gígjökull, it started raining heavily as you can see from my photo below. It was difficult taking photos in this heavy rain, and I got soaking wet, with the same happening to Gísli, the driver-guide when he was taking my photos! 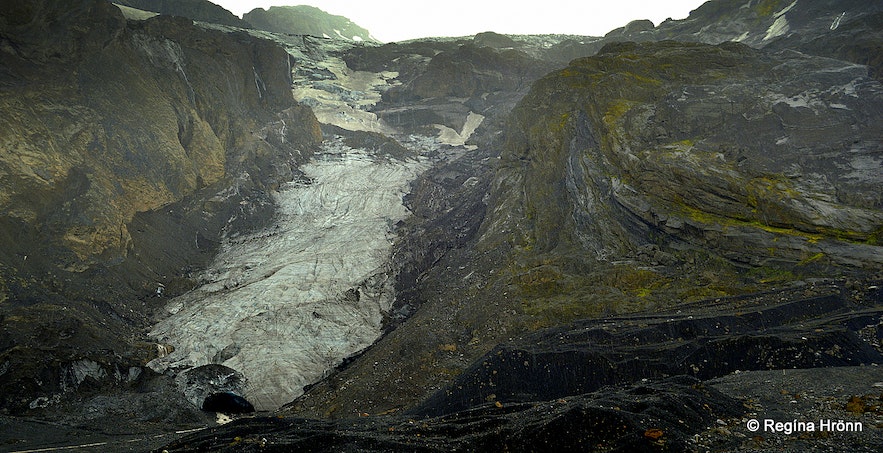 This is Iceland for you, the weather changes constantly and I never know how to dress when travelling in Iceland. Usually, I bring a whole set of a wardrobe with me, which of course is difficult if you are a guest visiting my country. So wear layers, that is the safest bet.

Water that flows from Gígjökull runs into Markarfljót river and before the 2010 eruption, there was a glacial lagoon in front of the glacier. The sheer force of the eruption caused a massive glacial outburst flood with 2700 cubic metres per second of water and discharge from the volcano at its peak.

It tore down the wall of the lagoon and filled it with discharge, leaving the landscape there very different from what it was before the eruption 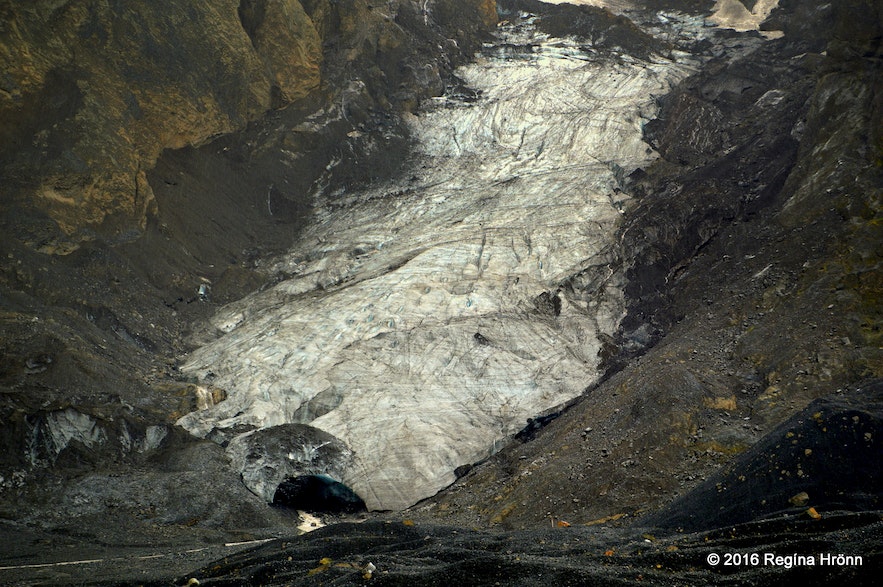 I visited Gígjökull glacial tongue in 2013 and 2014, and it is incredible how much the glacier has receded in just 2-3 years. You can see in the photo below the difference in just 3 years.

I walked up to it during my visit in 2013 to have a look at the ice cave. I didn't enter it, of course, as that is way too dangerous in the summertime, but the glacier was much bigger and thicker, as it were, 3 years ago.

This is a very rugged area. Being there is just out of this world, and one feels very small against such extreme forces of nature, thinking about what actually happened here during the Eyjafjallajökull eruption. And even if it is so rugged just a short distance further you will find a totally different landscape when you enter the beautiful oasis of Þórsmörk. 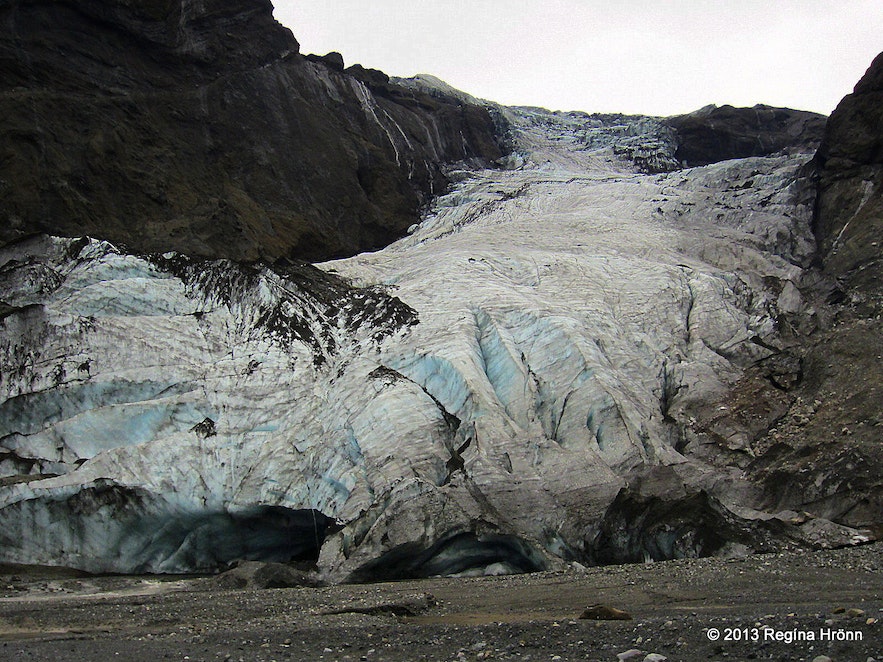 On this trip though we didn't go any further but turned back, as Eyjafjallajökull was what we wanted to see. I have joined another tour which took me to Gígjökul and Þórsmörk. In that travel-blog you can what Gígjökull looked like in 2018:

On our way back we visited Gljúfrabúi waterfall, which is one of the most mystical waterfalls I have visited in Iceland, as it is partially hidden behind a big rock. 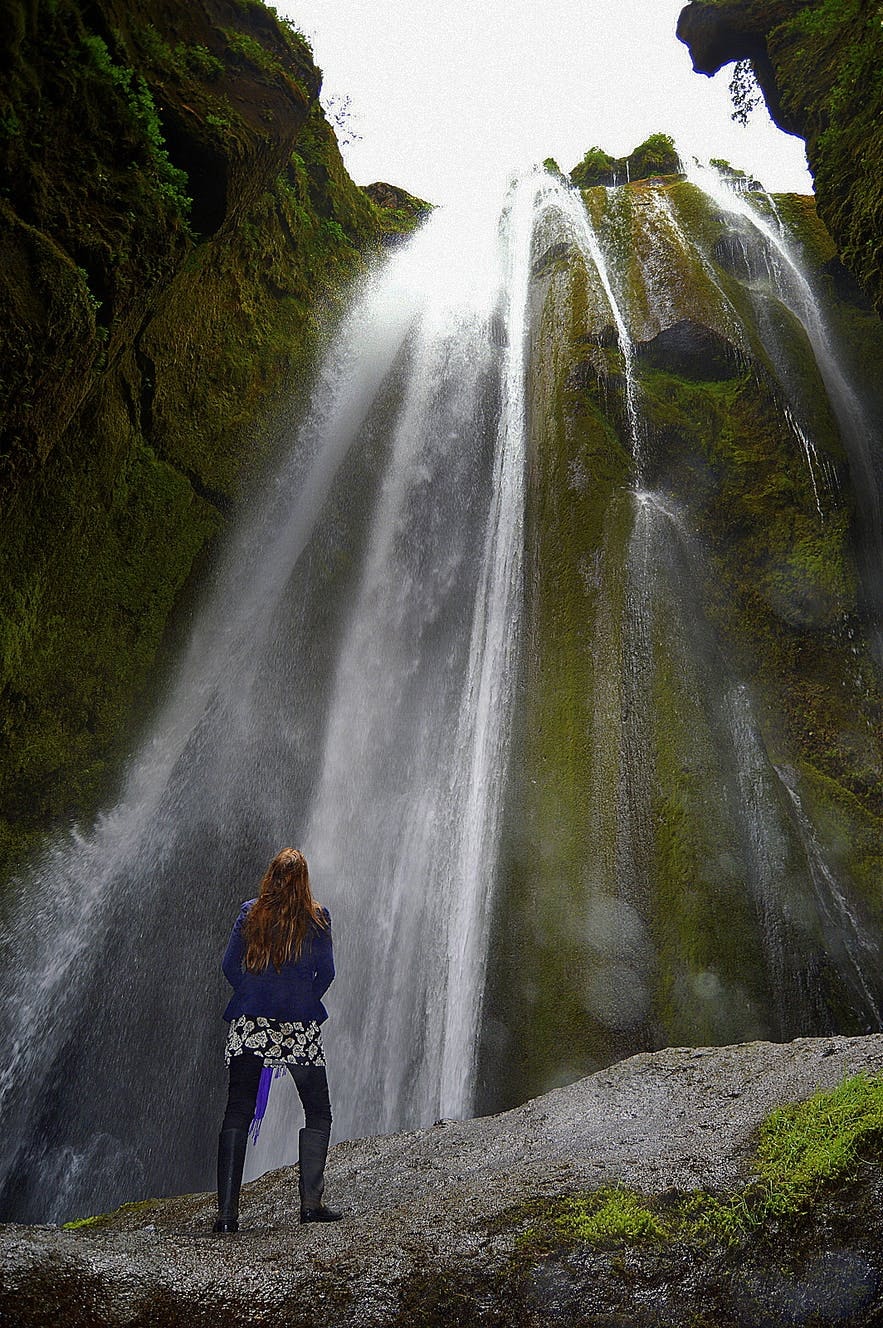 Gljúfrabúi is located next to Seljalandsfoss. The driver used this stop to inflate the tires again, but he had deflated them a bit for a more comfortable drive on the gravel road and the rivers. The name of the waterfall, Gljúfrabúi, means Dweller of the Gorge.

Gljúfrabúi is 40 meters high and in front of it, a big rock almost covers it. It is best to wear Wellington boots and maybe a raincoat while visiting this waterfall. 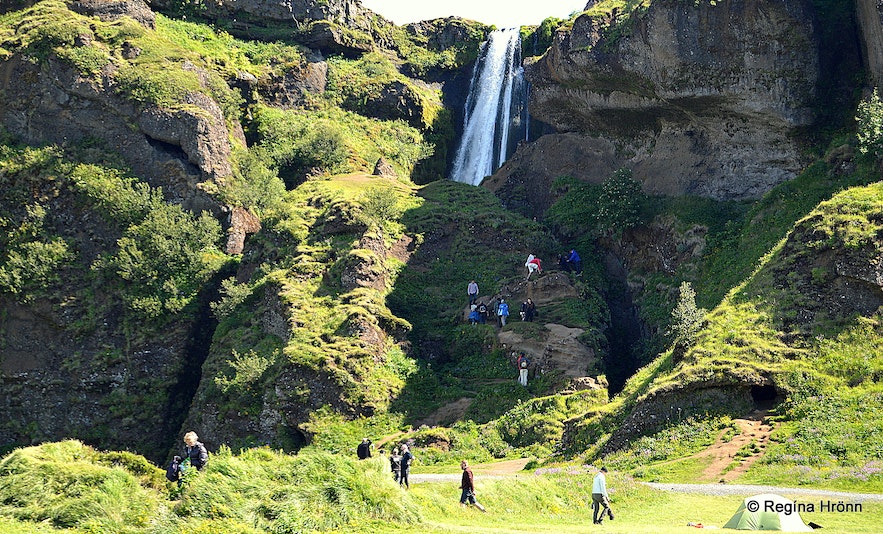 You can either wade through the gorge or climb up the rock and have a look at the waterfall from above. In the wintertime the rocks get quite slippery, so be careful. 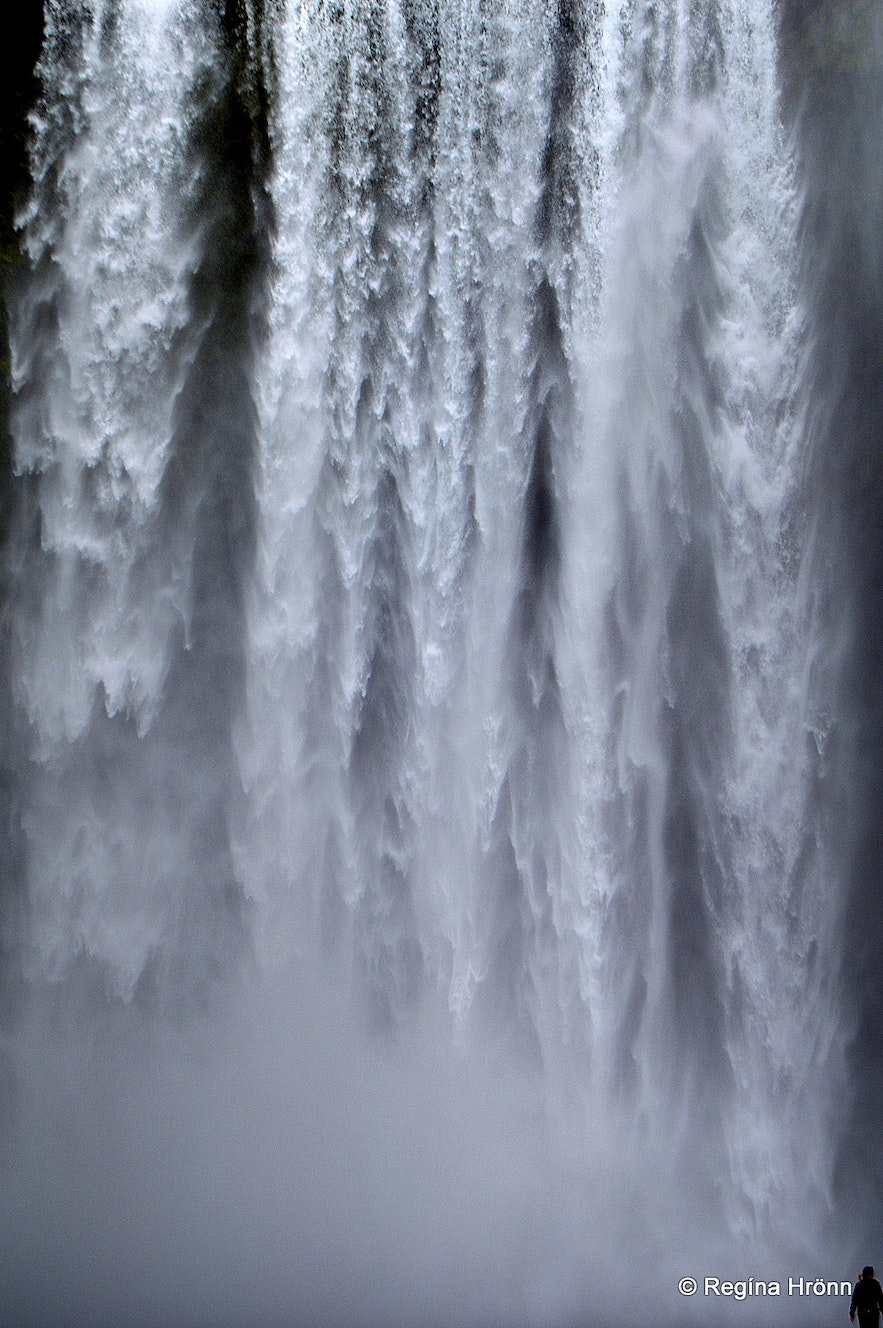 The next waterfall we visited was Skógafoss, which is 30 kilometres away from Seljalandsfoss, just off ring-road 1. It is mighty and ever so beautiful and it was my most favourite waterfall when I was little.

Skógafoss is 60 metres high and 25 meters wide, and you can walk right up to it. That will leave you drenched from the drizzle though. Protect your camera here! 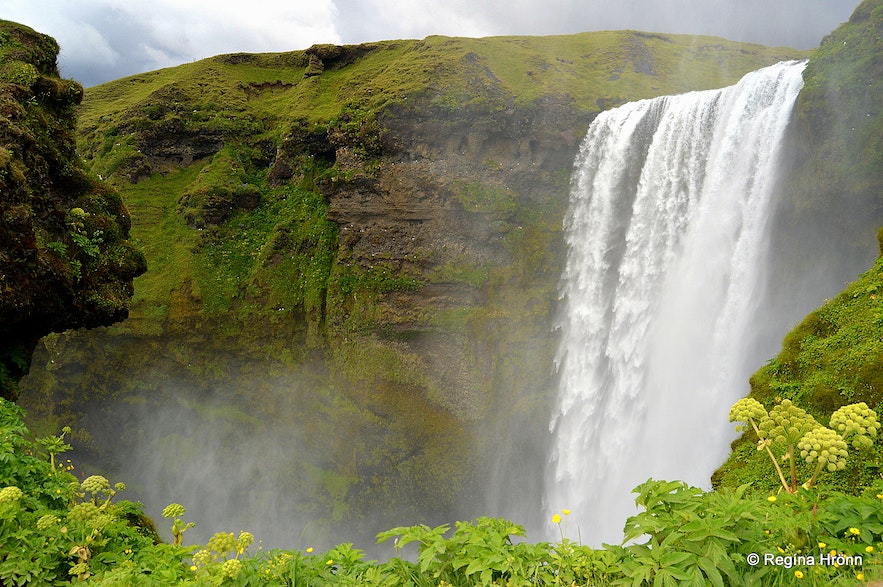 Skógafoss waterfall and the troll

You can take a break midway up though and visit the troll in my photo above. Be careful here though, it is a long way down!

A legend connected to Skógafoss. It tells us about the first Viking settler at Skógar, who hid a chest with gold coins in a cave behind the waterfall.

I have written a more detailed travel-blog about Skógafoss in which you can find the legend and see a photo of the chest ring.

Our group on the Eyjafjallajökull and South Coast tour

Off-road driving is illegal in Iceland, that is why we drove right by the sea where the tire tracks will be washed away. Don't attempt this without guidance though!

We stepped out of the jeep for a photoshoot and to enjoy the sea. We spotted some big black seals, which had come to check us out :) They are very inquisitive and tend to come close to the shore. 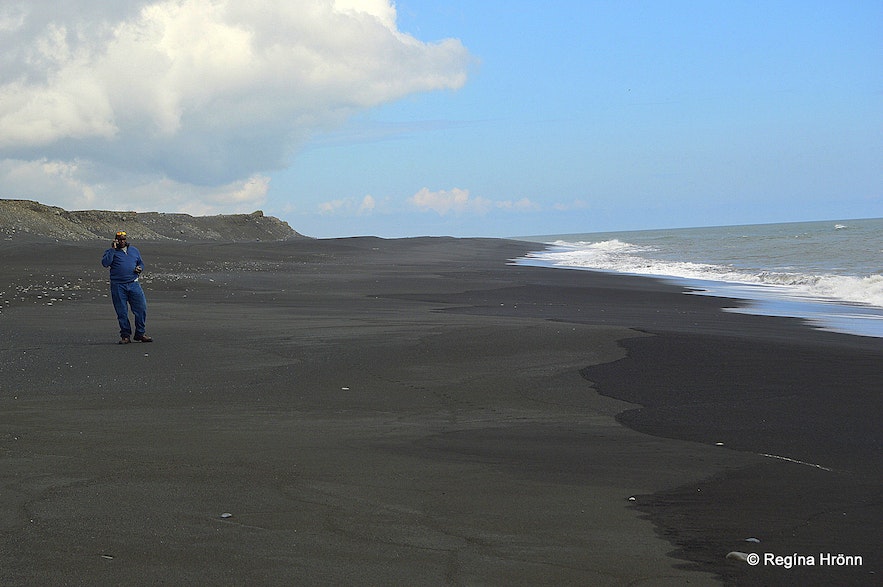 In the photo below you will see me with the driver-guide, Gísli, who had just cut off his awesome Viking beard, which he was wearing on the last tour I had joined with Activity Iceland.

Gísli cut his beard off after Iceland lost against France in EM - and thus looks more his age, 24. I am the small person looking like a hunchback hobbit beside him ;)

With Gísli on the black beach

We made one more stop on our way back to Reykjavík, after an enjoyable and eventful day - by Þorvaldseyri farm, which got hit hard in the Eyjafjallajökull volcanic eruption. The eruption took place right above this big farm - they even talk about having a volcano in their backyard!

They got hit so hard that the farmers there, Páll Eggertsson, and Ólafur Eggert Pálsson, a father and son and their families, decided they couldn't live there anymore, primarily as there was a small baby on the farm, and decided to move.

Þorvaldseyri farm and a dark cloud

It was on the news, and the nation was sad watching these hard-working farmers leave their farm. The same family has been running this farm for 110 years now or since 1906.

Then, to everyone's surprise, the crop grew at double speed due to the ash so when the eruption stopped there was a lot of crop. The farmers returned - and then there was a flood which almost ruined everything. But the farmers stood firm, and now their farmland is blossoming. 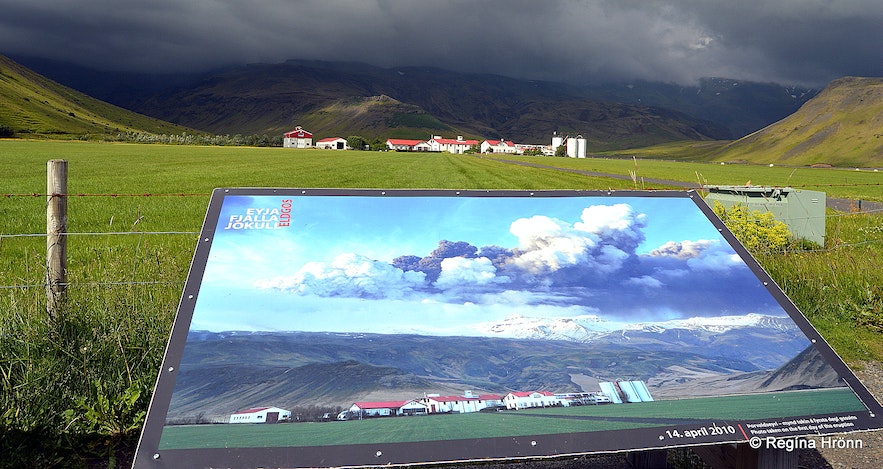 In the photo above you can see what Þorvaldseyri looked like during the Eyjafjallajökull eruption and what it looked like on the July day when we stopped by the farm.

There was this dark rainy cloud above the farm, so it looked kind of eerie. It was the same cloud that poured rain on us on the other side of Eyjafjallajökull by Gígjökull glacial tongue.

Þorvaldseyri farm is a big farm by Icelandic standards. The crop at Þorvaldseyri is wheat, barley, and rapeseed oil. And they produce meat and milk. 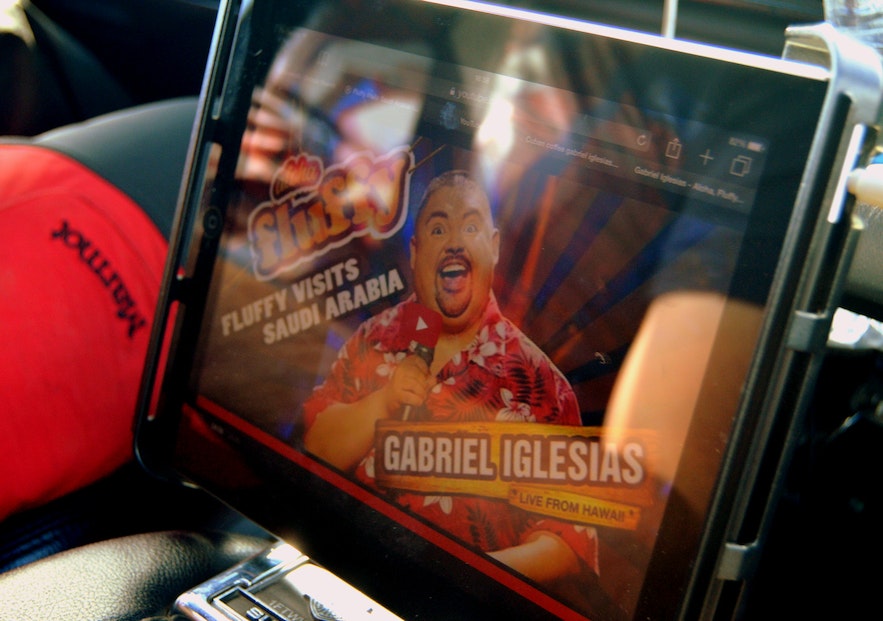 Watching stand-up comedy on the way back to Reykjavík

By now a long fun day had come to an end, and everybody was tired. There was still a 2-hours-drive to Reykjavík, and we got to watch a stand-up comedy show on the iPad in the super jeep.

I thoroughly enjoyed this tour and cannot wait for another guided tour on this super jeep - have a lovely time :)