Skógafoss waterfall has been my all-time favourite waterfall in Iceland since I first visited it as a child with my parents.

Skógafoss is one of the biggest waterfalls in Iceland, with a drop of some 60 meters and a width of 25 meters, and you can walk right up to, but be prepared to be drenched. It is just overwhelming standing next to it.

Top photo: a rainbow at Skógafoss

Seeing that it produces a lot of drizzle then you will be able to see beautiful rainbows on sunny days.

The most beautiful rainbows I have ever seen I have seen here by Skógafoss. 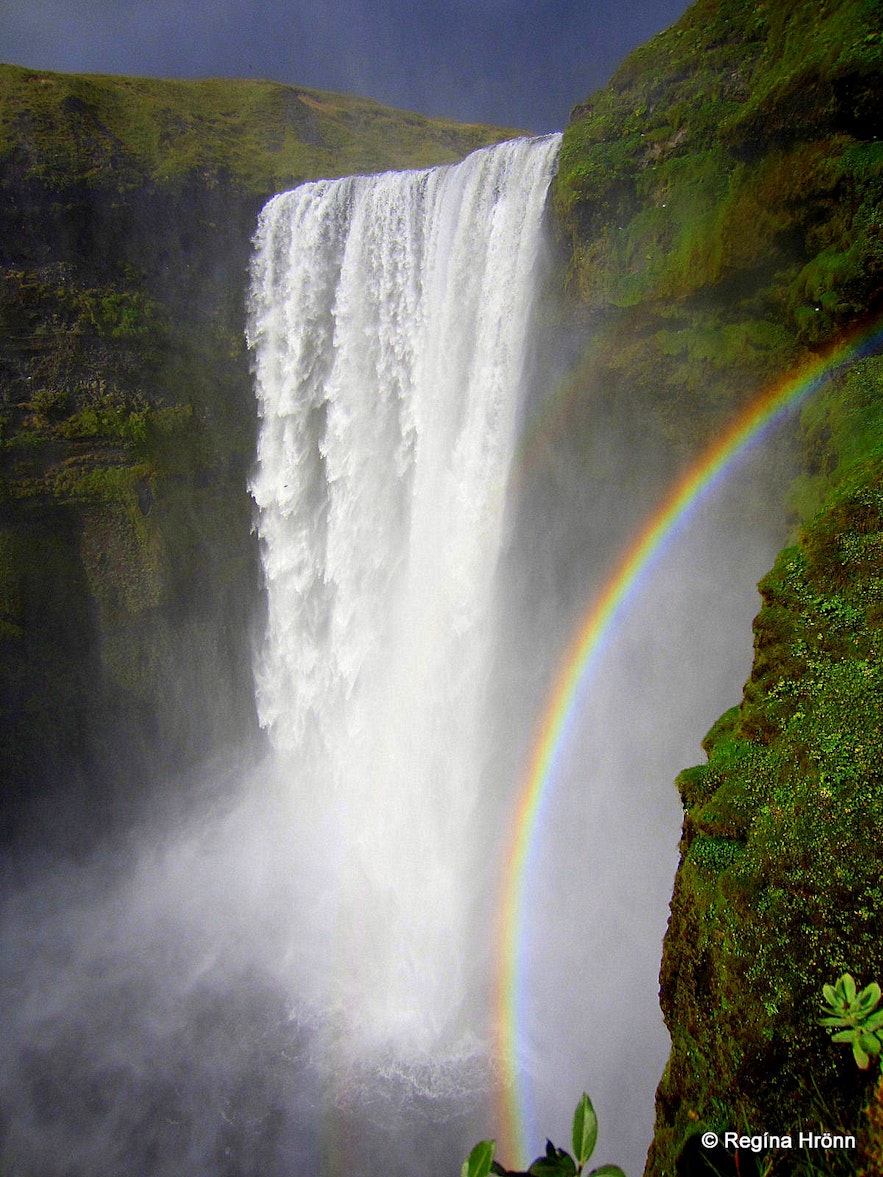 A rainbow by Skógafoss

Often there are beautiful double rainbows here and once I was encircled by a beautiful rainbow - I stood in a circle of a rainbow! It was impossible to take a photo of it, but my husband tries his best to take all kinds of photos of me with the rainbow. 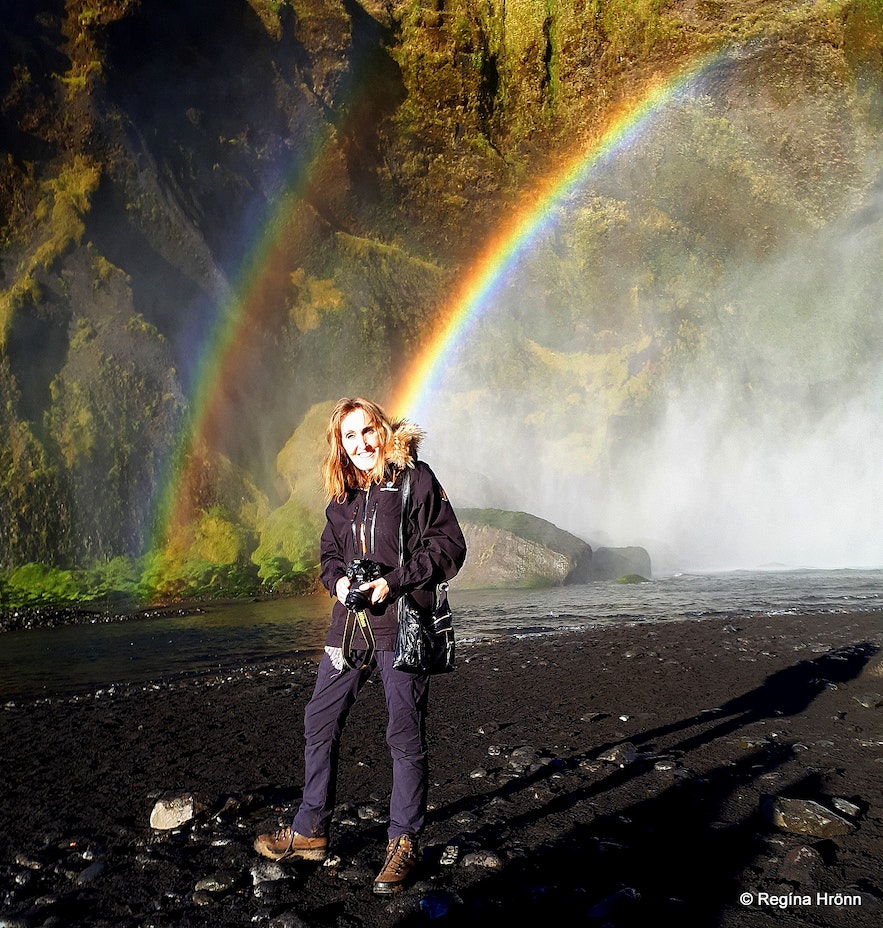 Touched by a rainbow at Skógafoss

Steps lead up to an observation platform above Skógafoss, i.e. if one is up for it, as there are all in all some 527 steps, depending on from where you start. I once climbed these steps on a very cold and extremely windy November day, which left me almost flying in the air!

But it is well worth climbing up all these steps to see Skógafoss from above and the beautiful view from up there. 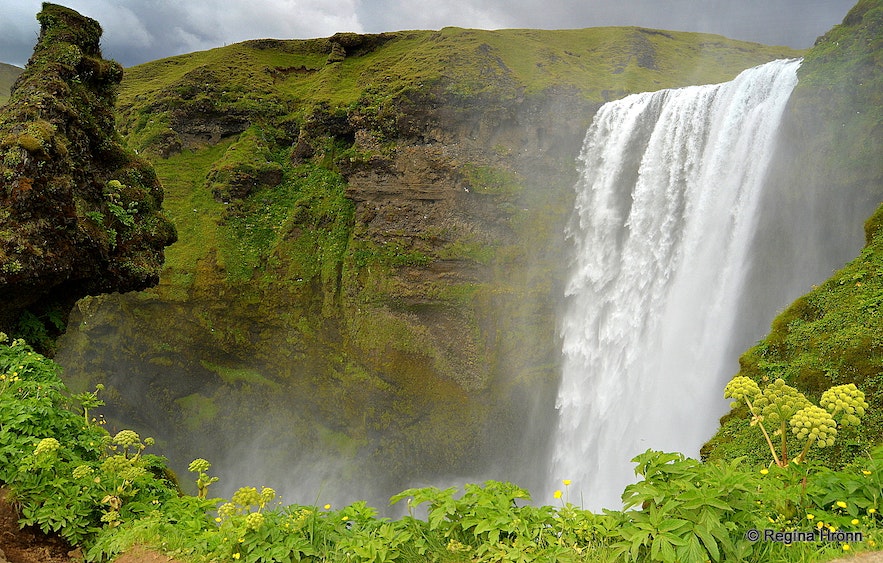 The troll by Skógafoss waterfall

Skógafoss is only one of the waterfalls in Skógá river, there are 30+ other waterfalls in this river above Skógafoss, some of which I will hopefully be exploring next summer!

If you do this hike may I ask you to report back to me with the number of waterfalls in the river, as I have heard several numbers, ranging from 22-37!

In 2010 Eyjafjallajökull glacier started erupting and blew millions of tons of ash into the atmosphere. Skógafoss went grey, and everything was covered in ash. It was so sad seeing my favourite waterfall in such a condition.

When you start seeing the waterfall from the ring road, it looks like a painting; ever so beautiful and majestic! 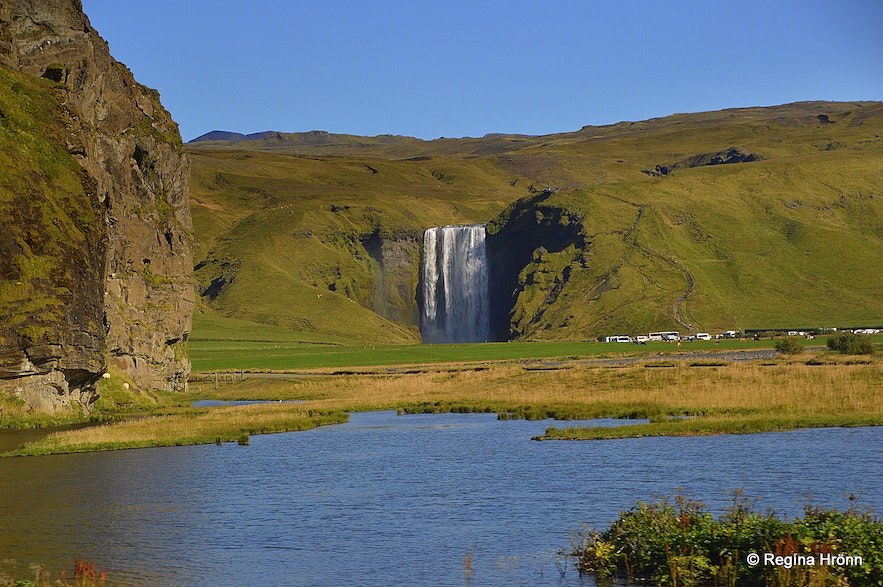 Skógafoss waterfall as seen from the ring road

It is especially beautiful when the water is still and I have seen some spectacular photos taken from this angle.

The Legend of the Treasure Chest in Skógafoss 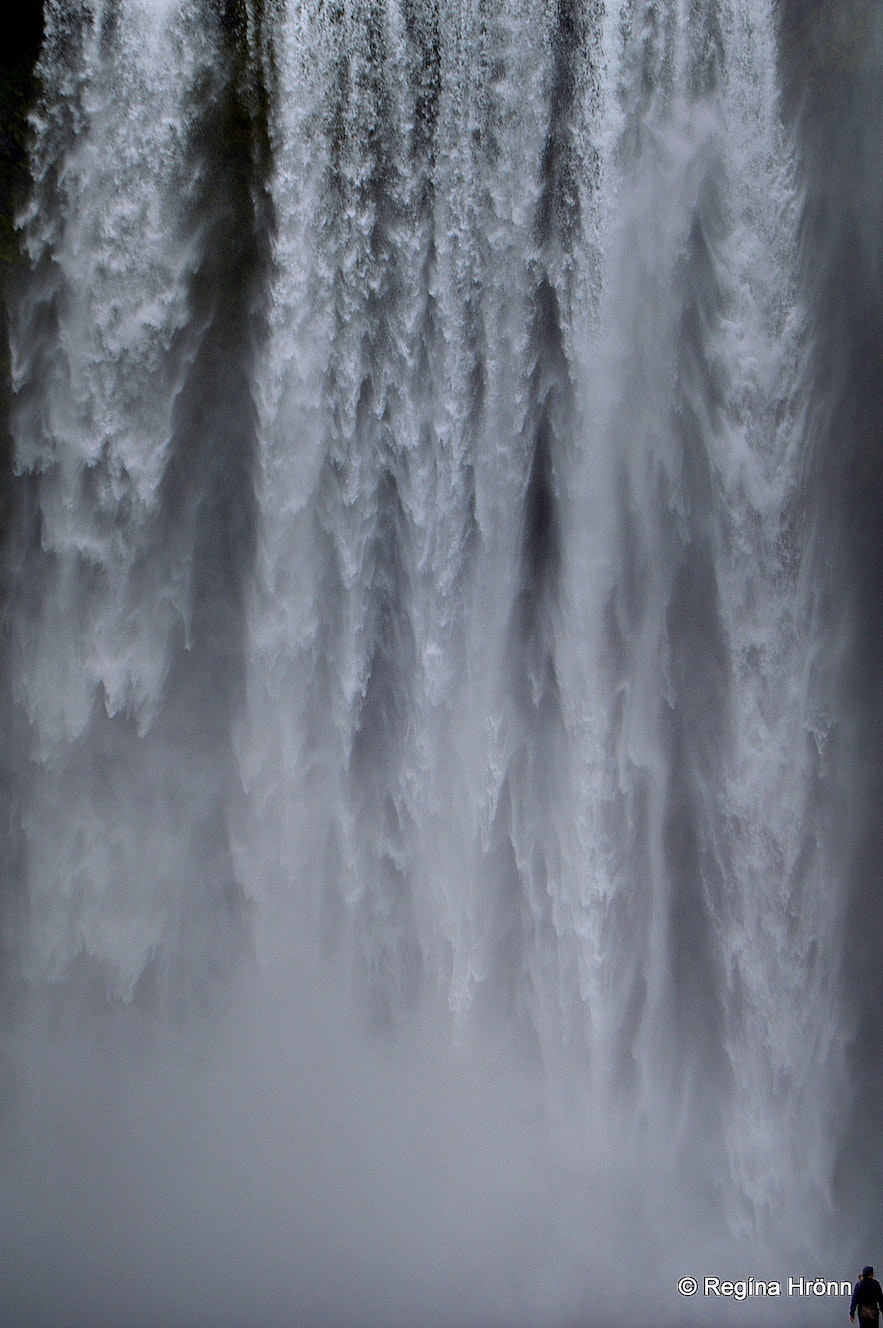 A legend is connected to Skógafoss waterfall; it is believed that behind it you can find a chest filled with gold and treasures. The story goes that Þrasi Þórólfsson, the Viking Settler at Skógar (Eystriskógar) in around 900, hid the chest and it is said that the first man who goes there will find great treasures.

I found this folklore in Þjóðsögur Jóns Árnasonar - the Collection of Folklore of Jón Árnason:

"Þrasi lived in Eystriskógar, some people say at Þrasastaðir farm, a short distance east of Skógafoss waterfall; Skógar is now the easternmost farm in Rangarávallasýslu county.

At that time Loðmundur lived in Sólheimar, the next farm east of Sólheimasandur sands, and thus they were neighbours. Þrasi and Loðmundur were both very skilled in magical arts. 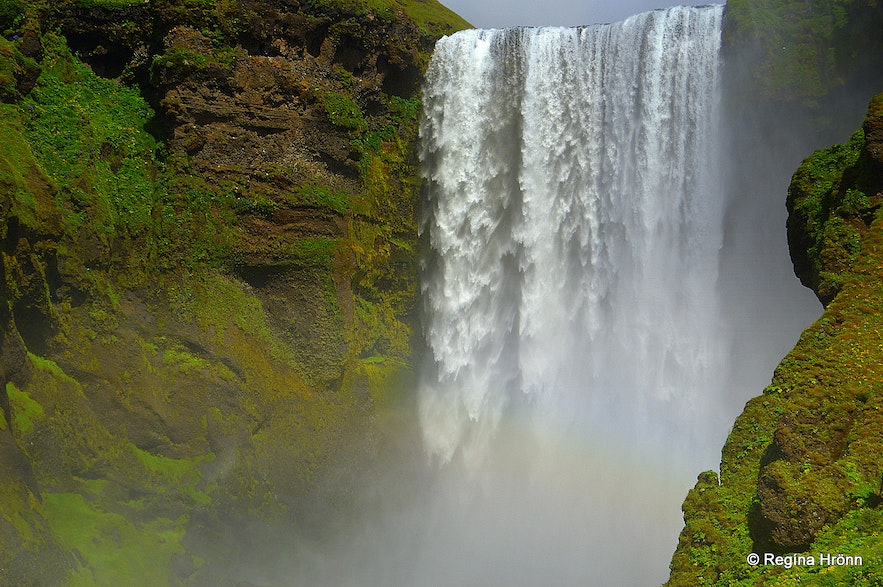 A river ran through their lands, called Fúlilækur, and then Jökulsár glacial river in Sólheimasandur plains. Landnáma states that both of them distributed this river to the other's land as neither of them wanted to have this smelly river close. This resulted in the sand, called Sólheimasandur plains, being void of grass - and one can still see many runways in the sand where the river has run at each given time.

Finally, the neighbours realized that they were creating a desolate wasteland. On the east side of Jökulsá glacial river, there is a hill in Sólheimaheiði heath leading from the mountain alongside the river - it is called Loðmundarsæti, but opposite on the west side of the river in the lower part of Mt. Skógafjall there is a place called Þrasaháls hill.

The river runs in gorges between these two hills and onto the sand plains. 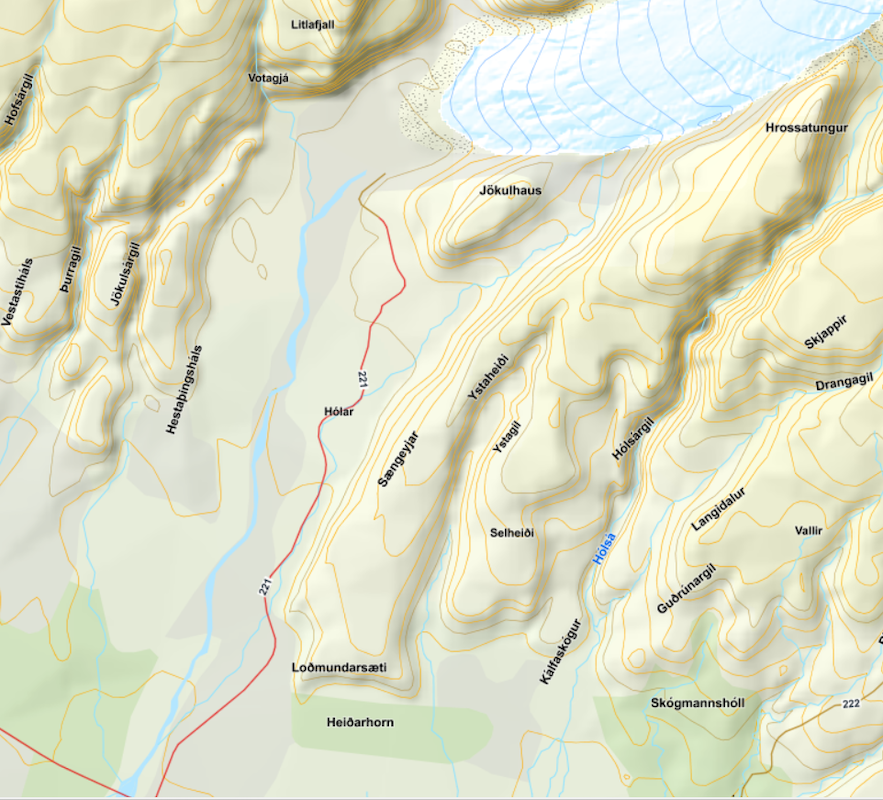 Map from Landmælingar Íslands - the National Land Survey of Iceland

It is said that in this location Þrasi and Loðmundur stayed while they were quarreling and both Landnáma and the folklore state that they made peace by the gorges and decided on making the river fall onto the sand plains by the shortest distance to the sea.

But it seems like there is always a whirl in this river and that one wave seeks upstream, while the other falls downwards, and the story goes that this unnaturalness of the river stems from the fight between Þrasi and Loðmundur. 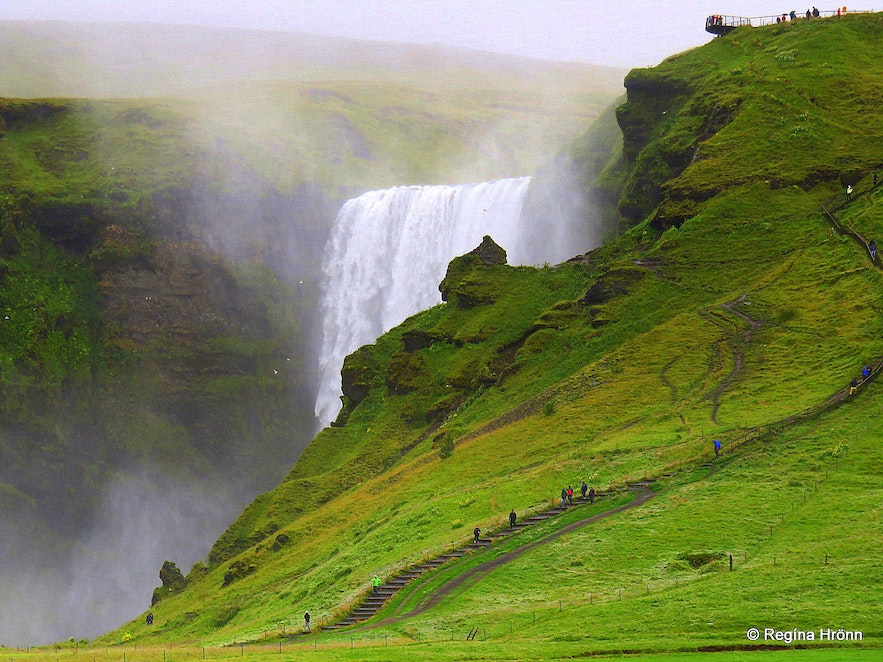 How many trolls do you spot in this photo? :)

The story goes that Þrasi, who owned a chest filled with gold and treasures, had put the chest beneath Skógafoss waterfall, and in olden times one could see one side of the chest protruding from the waterfall.

There is an old rhyme, which goes like this in Icelandic: 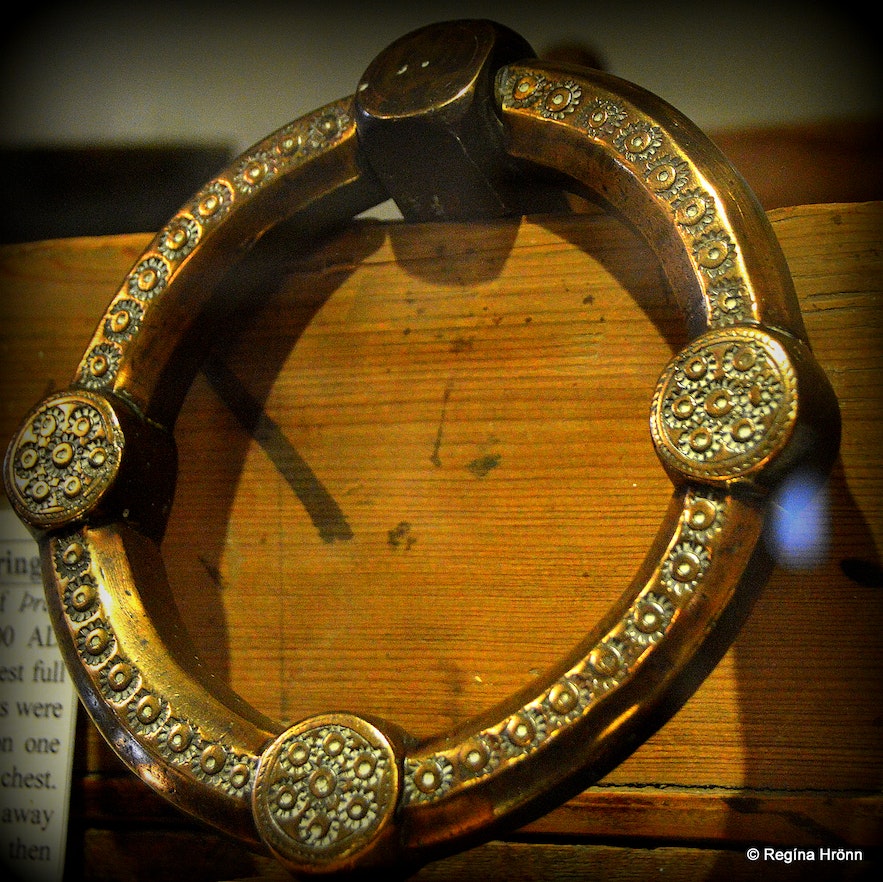 The chest ring is on display at Skógasafn Museum

The story goes that there were once three men at Skógar, the sons of Ámundi Þormóðsson ("lögréttumaður" 1639-1671 or longer). They wanted to retrieve the chest from beneath the waterfall. All of a sudden they looked in the direction of the farm, and it appeared to be on fire - they decided on returning back, only to find that there was no danger apparent on the farm.

But as they were about to pull the chest towards them they jerked the ring from the chest, and the chest got left behind. The story goes that the ring is now located in the church door at Skógar". 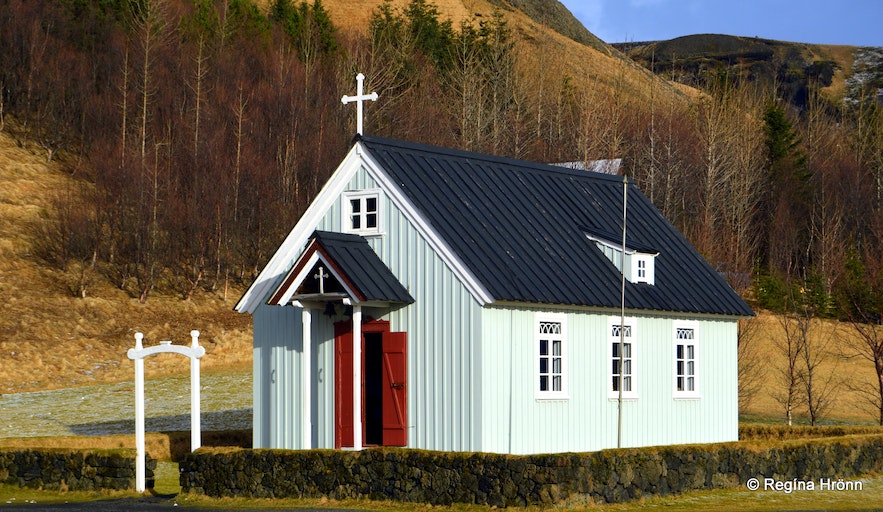 I have read that when the church at Skógar was deconsecrated this beautiful chest-ring was used in the church at Eyvindarhólar in the vicinity of Skógar. That church was pulled down in 1960, and a new church was built.

I visited that church on the same day that I stayed at Hotel Skógar, and it is a beautiful modern church. The chest-ring was then donated to the Skógar Museum and is there on display. 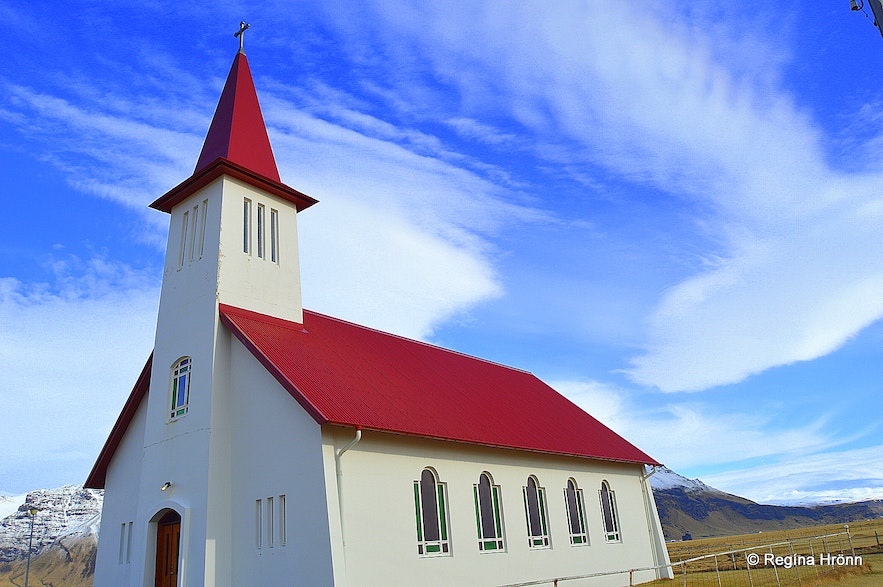 You can rent a car in Reykjavík, and drive to Skógafoss in 2 hours, but there are many stops on the way, so take your time :) 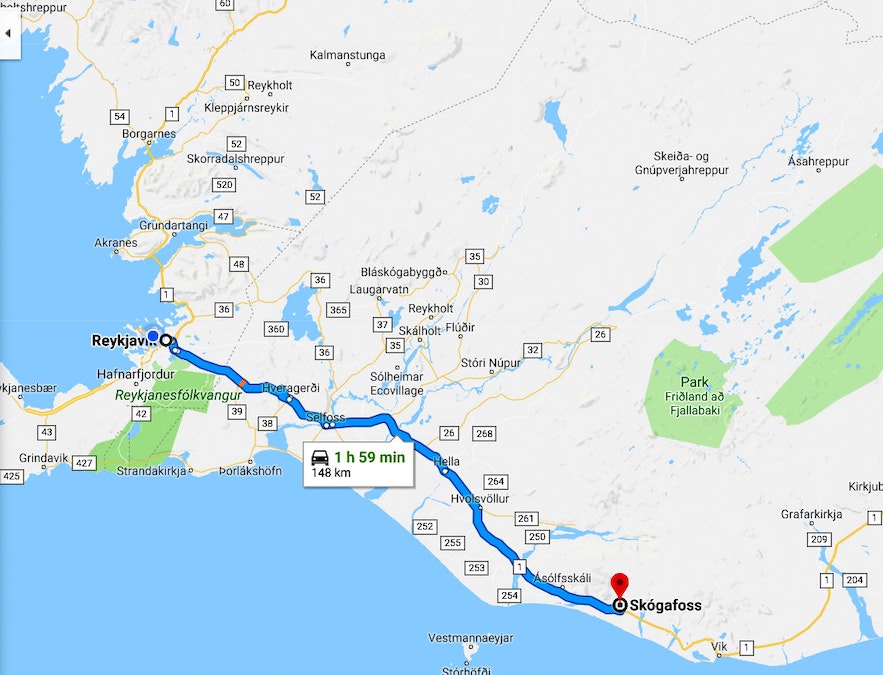 I also refer you to my travel-blog about the 3 beautiful Waterfalls of South-Iceland for information about most of the waterfalls on the south coast of Iceland.

Have a lovely time at Skógafoss waterfall :)