This travel-blog is a side-blog of my travel-blog on Goðafoss waterfall, which was getting to be so long that there was no room for the story of Grettir.

The 64th-66th chapters in the Saga of Grettir tell us about one of Grettir the Strong Ásmundarson's (born around 996) deeds. In the story, the outlawed Grettir abseiled down into a cave behind Goðafoss. 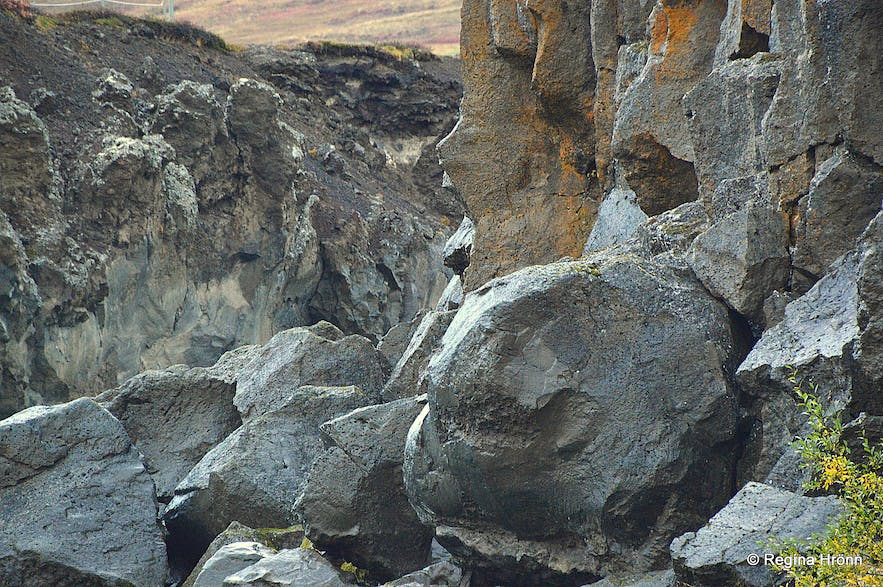 The story begins with the farm Sandhaugar in Bárðardalur valley being haunted by trolls and the farmer, Þorsteinn the White, and a farmhand disappearing from the farm at Christmas two consecutive years in a row.

Grettir heard of their predicament and as he had a history of dealing with such stuff he came to Sandhaugar farm to help out, introducing himself as Gestur. This happened on Christmas Eve. The lady of the house, Steinvör, always attended mass on Christmas Eve at Eyjardalsá farm and that is when the troll haunting usually took place.

Here is the location of  Sandhaugar farm in Bárðardalur valley:

The river was extremely forceful this Christmas Eve and Steinvör thought it was impossible to cross it and attend mass. Grettir offered to help her cross the river, which was swelling and carrying chunks of ice.

Grettir carried Steinvör and her daughter on his left arm across the strong and forceful river. The river reached him up to his shoulders and he had to push away chunks of ice with his right arm.

After leaving the mother and daughter on the other side of the river, Grettir then returned to the farm Sandhaugar. The priest at Eyjardalsá farm was surprised that they had been able to cross the forceful river and the women stayed at Eyjardalsá farm for the night. 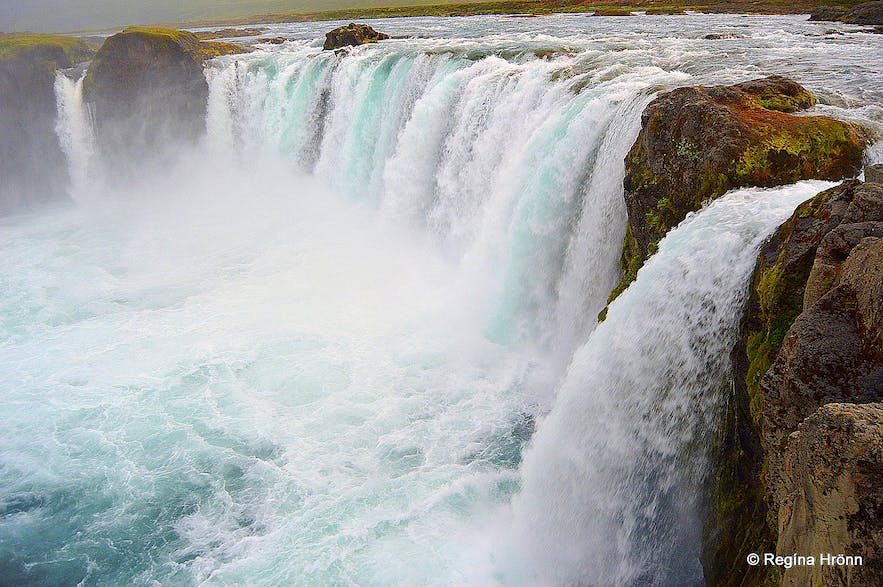 Once inside Sandhaugar farm, Grettir prepared for a troll attack. He waited fully-dressed and late that night he heard a racket; the doors were thrown open. A huge troll woman entered the farm and attacked Grettir. They wrestled for a long time and she turned out to be somewhat stronger than Grettir. While wrestling they broke everything in sight inside the farm.

The troll woman tried to drag Grettir out of the farm, and they broke the fittings of the outer door and carried them out on their shoulders.

The fight took them to the river and the gorge with the waterfall (which is quite a distance from Sandhaugar farm if the waterfall in question is Goðafoss) where they carried on fighting all night long. Grettir, who had never before fought such a strong troll, was finally able to cut off her arm. She then fell into the gorge and the waterfall and disappeared.

You can read the whole account on this terrible fight in Chapter 65 in the Saga of Grettir. 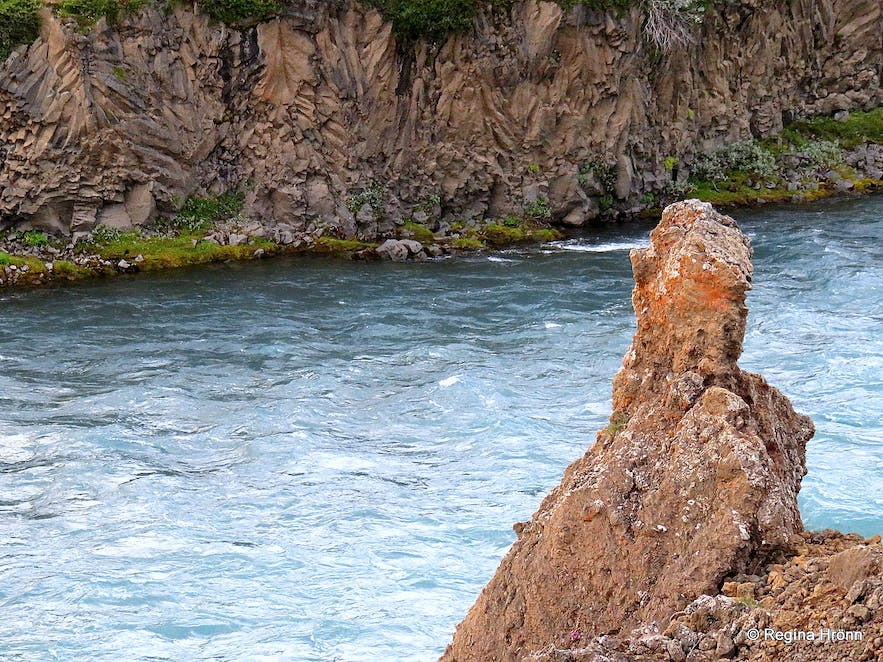 Grettir, who was exhausted and battered, lay for the longest time on the rock until he returned back home to Sandhaugar farm. The lady of the house returned the next morning and was startled when she saw the state of her home, and the state of Grettir, but he was all swollen and blue from the fight.

She was impressed when Grettir told her what had happened and asked for his identity. Grettir, who had told her that his name was Gestur, came clean and told her who he was, the outlaw Grettir the Strong. Grettir then asked for the priest, Steinn, from the close by Eyjardalsá farm.

After hearing Grettir's story, the priest was doubtful, but Grettir pointed out that the two men, who had disappeared from the farm, might be in the gorge. 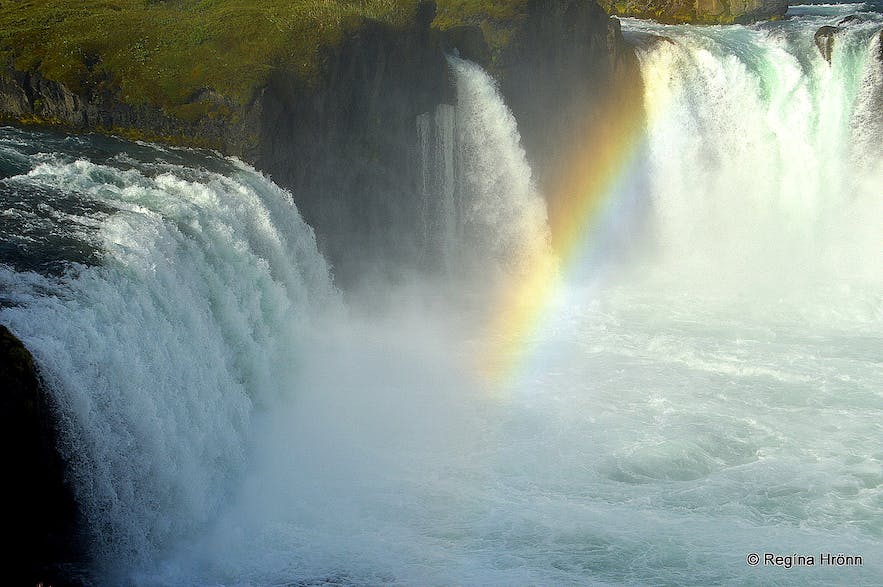 Christmas passed and after Grettir had recovered from the fight with the troll woman, he went to Eyjardalsá farm and asked the priest to accompany him to the waterfall. Once there they saw a small cave and Grettir decided to check out the waterfall to see if anything was hidden behind it.

Grettir, lightly clad with a girth and carrying a short-sword, ran from the cliff and jumped into the waterfall. The priest held a rope, which they had brought with them, and put a peg down into the cliff and stacked rocks over it. He just saw the soles of Grettir's feet before he disappeared into the river.

Grettir dived under the waterfall which was a difficult task due to the great force of the waterfall and the whirlpool. He had to dive so far that he touched the riverbed before he could enter the big cave behind the waterfall.

Grettir went up into the cave and saw a great fire, by which a terrible giant lay. But as Grettir approached the giant, the giant jumped on his feet, reached for a glaive with a wooden shaft and attacked Grettir.

Grettir attacked him with his short-sword and cut through the wooden shaft of the glaive. The giant reached for a new weapon; a sword which was hanging on the cave wall. He was thus exposed and Grettir struck him in the chest, leaving such a big wound that the bowels fell out of the giant and into the river and were carried downstream.

The priest was waiting by the rope to help Grettir up; he spotted the gory bowels and thought that they were Grettir's who was by now dead. He ran home and said that Grettir had been killed and what a great loss it was.

Now, what was happening to Grettir? He struck the giant one blow after another until he was dead. He then lit a torch and checked out the rest of the cave. It isn't mentioned in the story how much money he found, but it is believed to have been a lot.

Grettir stayed in the cave well into the night. He also found the bones of two men and put them in a bag. Were they the bones of the farmer and the farmhand of Sandhaugar farm? 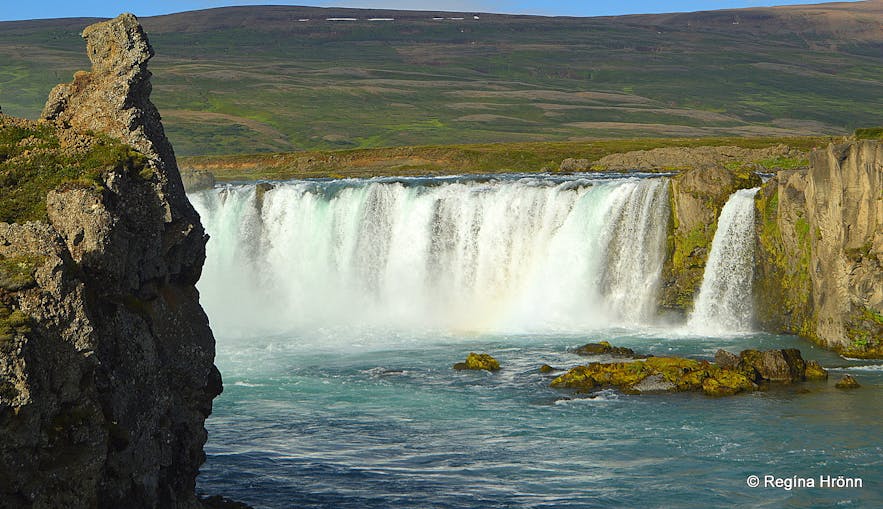 Grettir now left the cave and swam to the rope and shook it; and realized that the priest had gone home. He hauled himself up the rope by the strength of hand, and he, being Grettir the Strong, managed to pull himself up on the cliff.

Grettir went to the Eyjadalsár farm and put the bag with the bones on the church porch, along with a rune-staff with a beautifully well-cut rhyme about what had happened in the cave. You can see this rhyme in the 66th chapter of the English version of the Saga of Grettir.

Here you can see the location of Eyjardalsá farm:

The priest found the bones the next morning, but Grettir had moved on to Sandhaugar farm further south in Bárðardalur. The priest found him and asked him what had happened inside the cave, and was scolded by Grettir for not holding onto the rope. The bones were buried in the churchyard and from then on Bárðardalur valley was no longer haunted.

(Translated into English, shortened and recapitulated from Grettissaga - the Saga of Grettir - RHR) 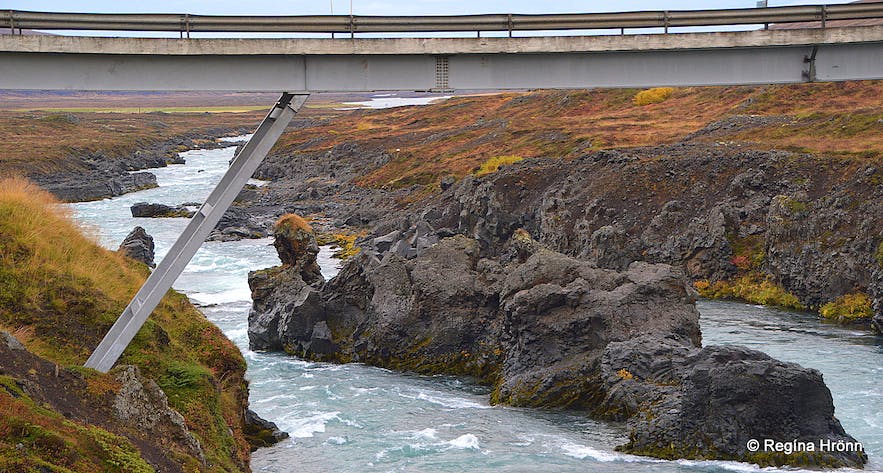 Grettir the outlaw, hid at Sandhaugar farm in Bárðardalur the next winter. Word got out that he was hiding in Bárðardalur and men were sent to kill him, so he had to flee. He put up a lair in Drangey island after some adventures and a few detours, including paying his mother at Bjarg a couple of visits.

Late that summer, Steinvör, the lady of the farm Sandhaugar had a son, Skeggi, which resembled Grettir a lot when he grew older, as he was very strong. Skeggi died at 16.

Just one year short of being set free from his outlawry, with a maximum penalty of 20 years, Grettir was killed by sorcery on Drangey in Skagafjörður, a lone bird-cliff, where he had lived for around 3 years with his brother, Illugi, and his slave Glaumur. 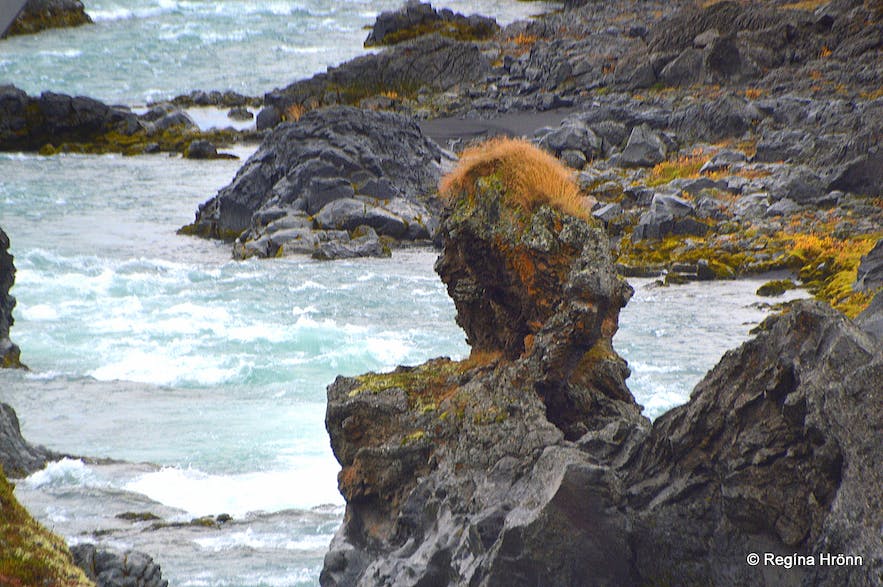 The reason for Grettir's outlawry was that he was believed to have started a fire which killed some 12 men, amongst them 2 brothers. The men had mistaken Grettir for a troll when he entered the rest house to ask for fire. They attacked him, some even with firebrands, and the fire spread out (38th chapter in Grettissaga). So he wasn't even guilty, but still hunted for almost 20 years.

I urge you to read Grettir's interesting story and his predicaments living as an outlaw for almost 20 years under harsh circumstances in various places in Iceland. 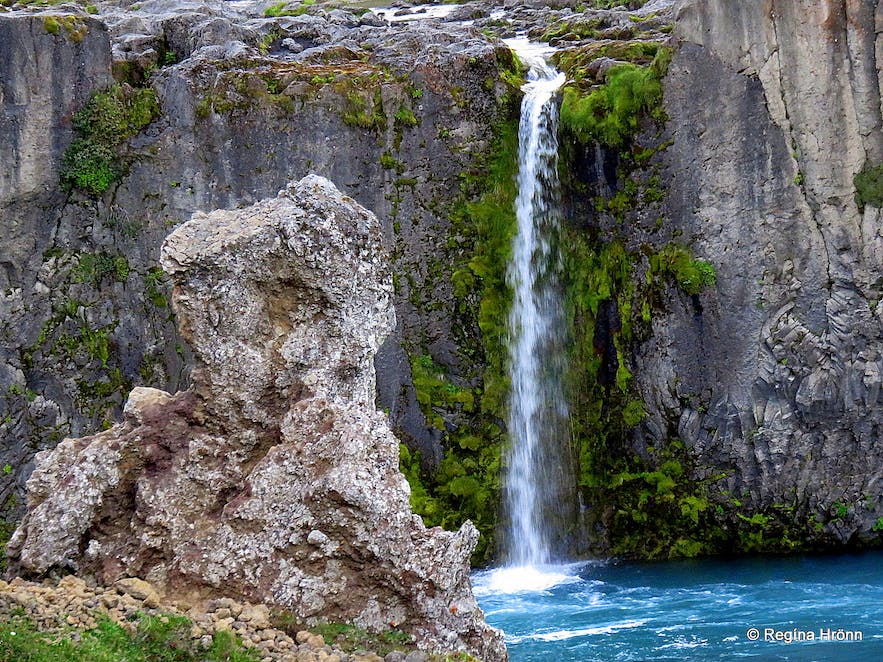 Check out two of Grettir's lairs called Grettisbæli in the following travel-blogs:

The many beautiful sights of Mývatn are 53 km away. And Húsavík, the Whale Watching Capital of Iceland is only 47 to 50 km away depending on which route you take.