Gufuskálar & Írskrabrunnur - the Well of the Irish on the Snæfellsnes Peninsula

You will find this old well at Gufuskálar by Útnesvegur road 574, heading towards Hellissandur village. Turn left onto a paved road by these 2 signs: Gufuskálavör and Írskrabrunnur. Let's visit these two places, first Írskrabrunnur well.

Ascending from the Well of the Irish

We Icelanders don't know why it is called the Well of the Irish, but there are other spots in this area, which also have a reference to the Irish, f.ex. Írskubúðir or the Camp of the Irish, which are ruins of a settlement farm dating back to 850-950.

We know that there were some Irish people in Iceland before the Vikings settled here, but they seem to have left when the Vikings arrived (this is controversial though). The Vikings brought then with them some Irish slaves. The Viking settler Ketill gufa Örlygsson stayed at Gufuskálar for some winters according to the 45th chapter of Landnáma - our Icelandic Book of Settlement.

The Well of the Irish was the water supply in this area, Gufuskálar, for centuries until it got lost from sight. 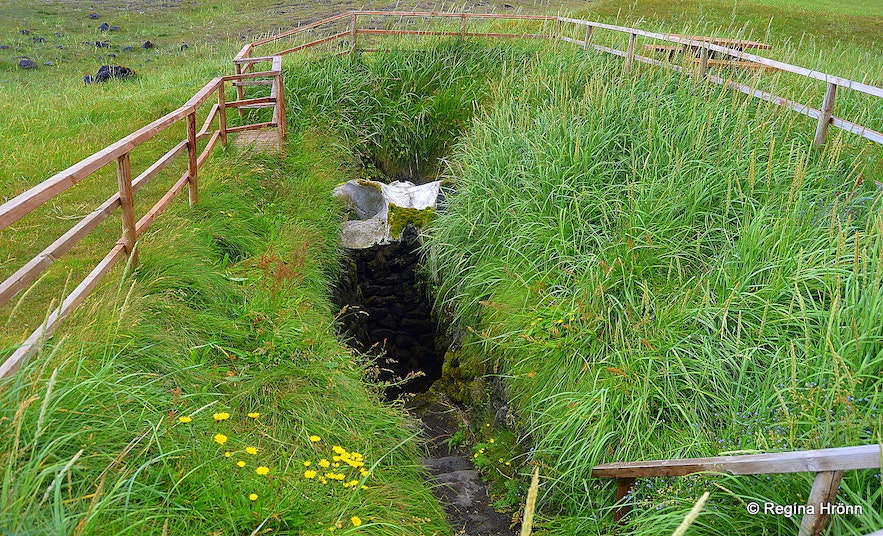 Until 1948 there was farming at Gufuskálar, but after the farm was deserted the old well disappeared under sand and finally got totally lost. What a pity that it wasn't preserved back then. A group of men searched for the well, but couldn't find it. It is a funny story really how the well was eventually found again in 1989 and preserved as an old relic.

The grandson of Elínborg, the last woman to live at the Gufuskálar farm, revisited this area where he had spent so much time as a young boy. This man, Sæmundur Magnússon from Ásgarður at Hellissandur, and his friend, Ólafur Elímundarson from Hellissandur, were walking around this area reminiscing.

They passed the area of Lóranstöð at Gufuskálar close by and started talking to 2 women who were painting outside - and told the women that they had just been visiting the area of the Well of the Irish (which of course was long lost!). 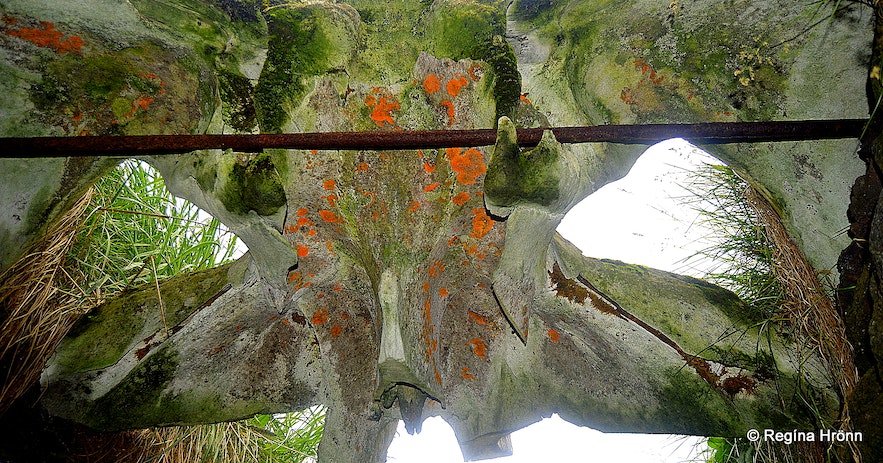 The whale bone in the Well of the Irish

The day after the workers at Lóranstöð, who had been trying to find this well for the longest time, were thrilled to hear that somebody knew of the location of the well and got hold of Sæmundur and Ólafur before they left the peninsula. In their company they started digging for the well and discovered a huge whalebone - see my photo above.

Seeing that they had found the location of the well they stopped digging and immediately alerted Þjóðminjasafn Íslands - the National Museum of Iceland - about their find. This was now in the hands of the museum and the well was dug up and protected. How fortunate that these men had come to revisit Gufuskálar - or else this well would have been lost to us!  I love this story of how the well was rediscovered by chance :) Ref. Rafhlaðan.

There is now a fence around the well to protect it - and to protect visitors from falling into the well. And lest we forget its location again ;) There are 16 steps leading down to the well. I descended into it, but it is dried up and muddy.

It was interesting though descending into the well to get a taste of my history, as it were. 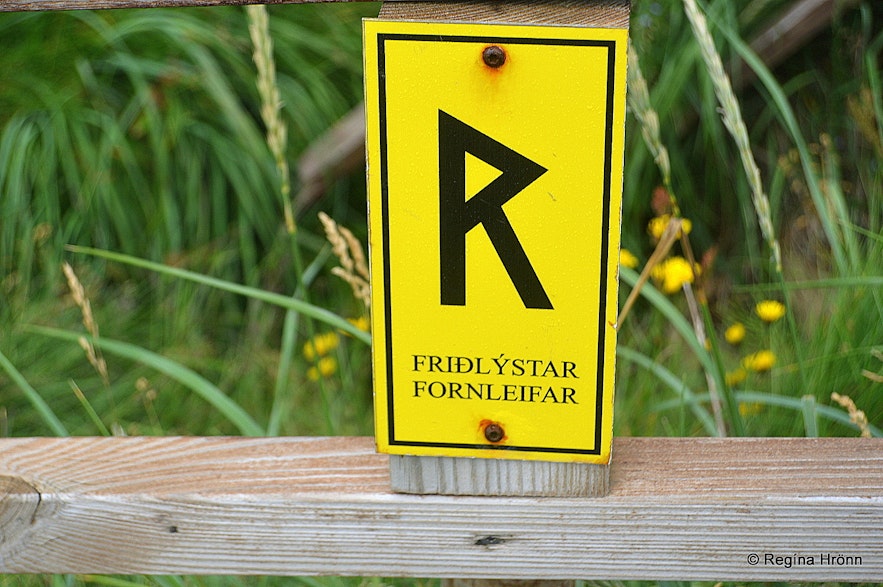 The yellow sign by the Well of the Irish

You will see a yellow sign on the fence surrounding the well with the letter "R" and "friðlýstar fornleifar" written on it meaning that the well is protected as here we have discovered antiquities. Let's tread lightly here as we don't want to damage anything in such an old well.  By the way, this whole area is protected as there are so many antiquities in this area.

Now let's have a look at Írskrabyrgi or the Shelter of the Irish just a few meters away from the well. The stacking of the lava rocks is very even and there is an entrance to it.

To me, this shelter looked like the remains of an old church, but we don't know for sure what it is.

From the Shelter of the Irish, I had a good view of the shoreline and the sea.  All of a sudden I spotted something emerging from the sea and running on the rocky beach.  It turned out to be a small mink carrying a fish bigger than itself! 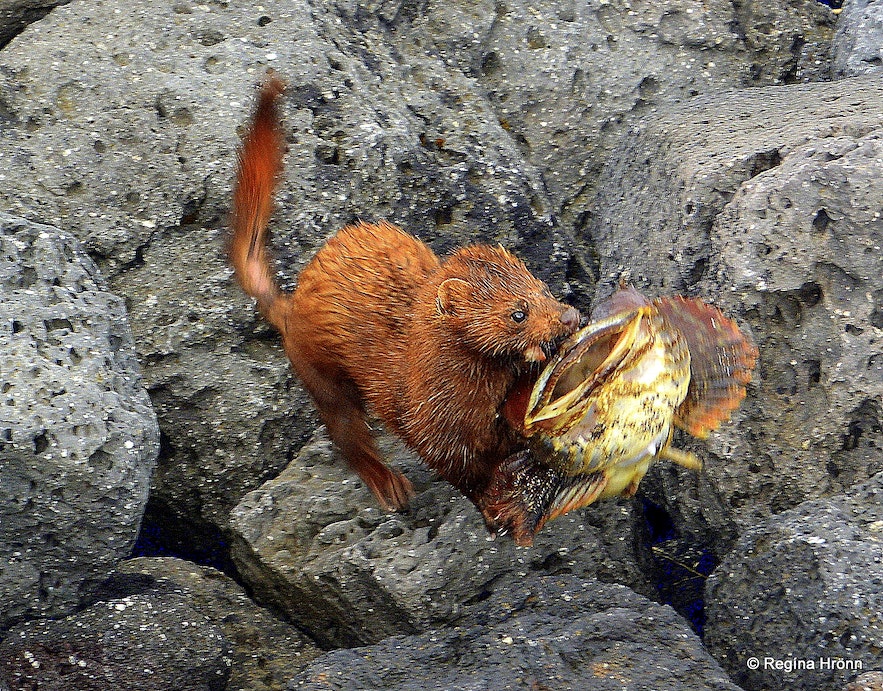 I watched it for a while and was very surprised that it was almost running towards me, as minks are very cautious creatures and fear human beings.

But this little mink was probably too preoccupied with its big prey to mind me. So I got a lot of photos of it and followed it until it disappeared into a hole in between the rocks.

Minks are not native to Iceland as they were imported in 1931 for fur farming. In 1932 minks had already begun to escape from the fur farm. 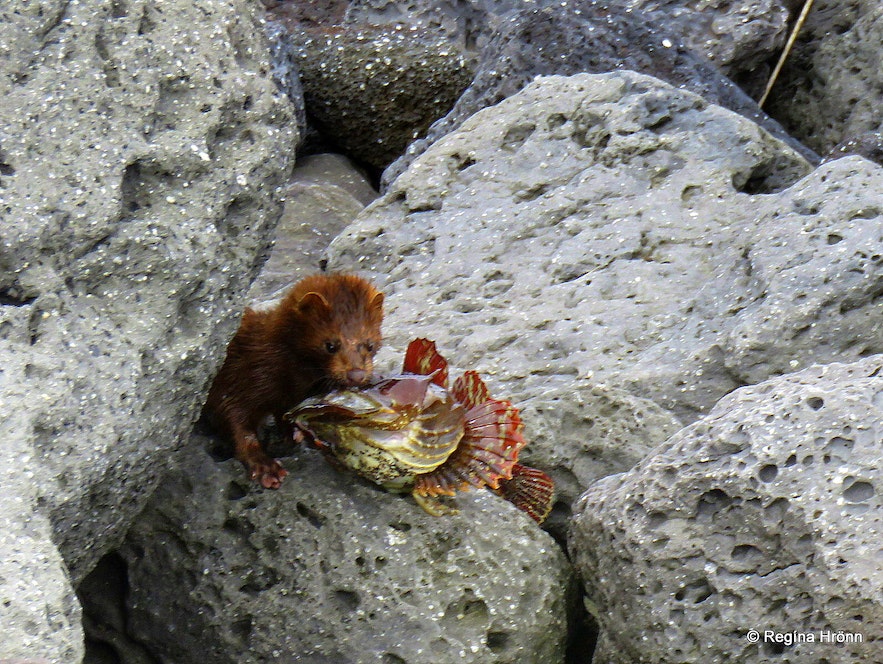 Fur farming was considered to be a lucrative business and mink farms popped up everywhere we looked.

More and more minks escaped from the fur farms and minks can now be found all over Iceland.

The minks are considered to be a pest, but I liked seeing this little mink with this big fish in its jaw. I didn't like the minks very much though when I was fishing as a girl in Lake Þingvallavatn and the minks kept stealing my catch behind my back ;) 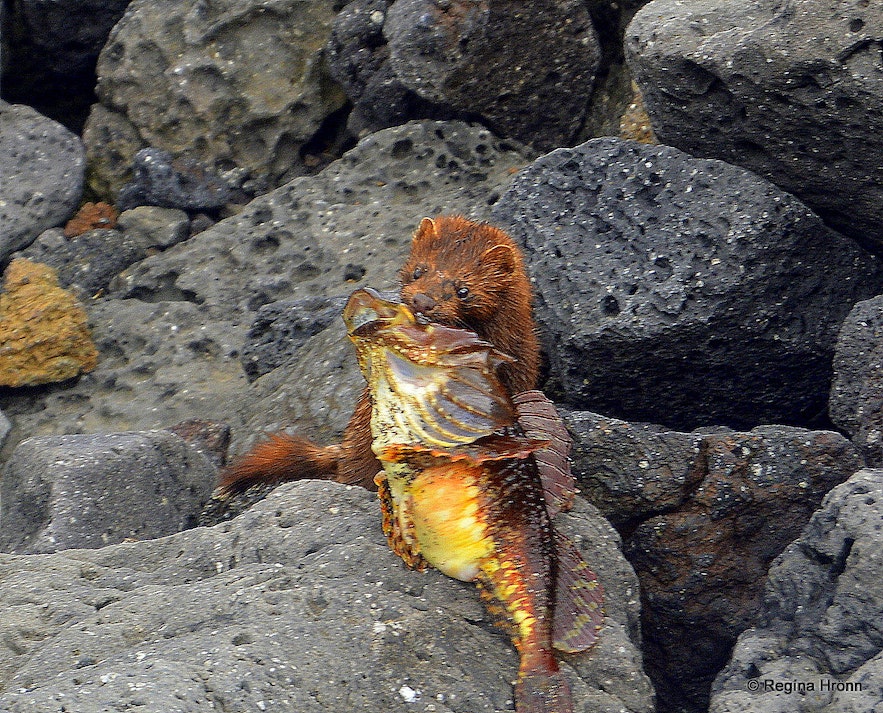 Now let's go back to the car and drive to the fork in the road and drive down to  Gufuskálavör.

There are 700 meters or a 10-minute walk from the Well of the Irish to Gufuskálavör, but as we had the car we drove to the next parking lot by Gufuskálavör and checked out that area. 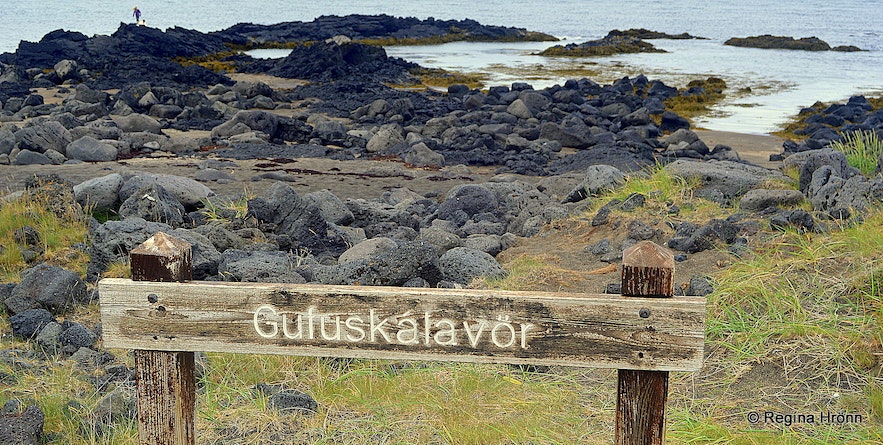 The history of Gufuskálar dates back to at least the year 1274 and the King owned half of the land and the church at Staðarstaður owned the other half.

At Gufuskálavör you will find an old fishing station dating back to the 14th and 15th centuries. Here you can see the ruins of fishermen's huts, fish storage huts as well as farm ruins. If you walk down to the beach you will see wakes in the stones as the keels of the rowboats left grooves in the stones. 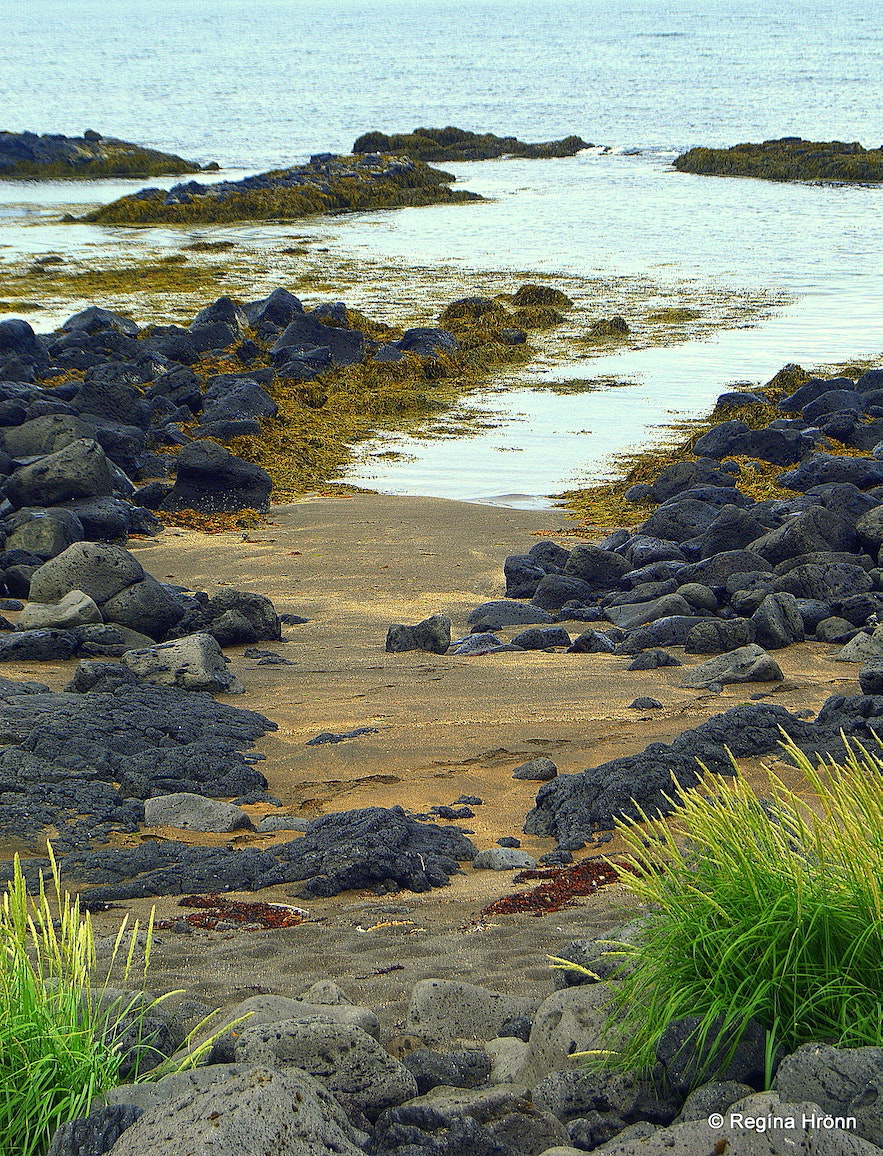 These open boats were used until the 20th century and you can see such boats in many folk museums around Iceland.

We are so pampered nowadays, but I have heard many stories of one of my great-grandfathers fishing in such an open fishing boat, how times have changed in my country. 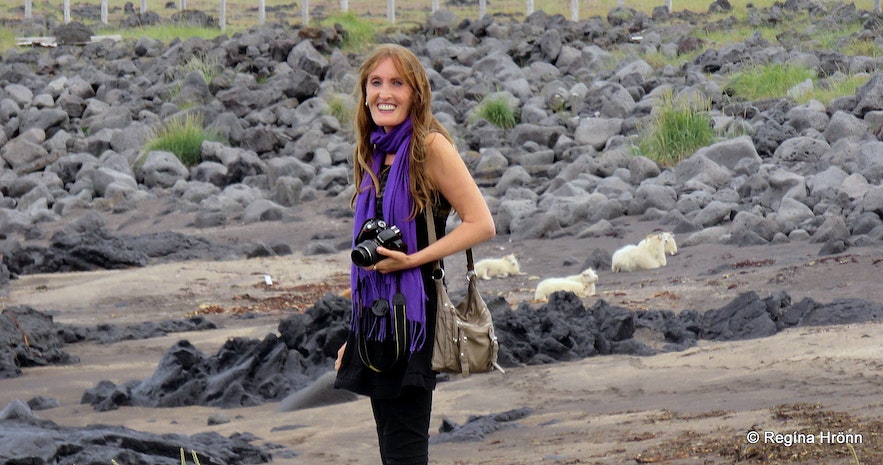 You will also find a monument for the last woman living in Gufuskálar, Elínborg Þorbjarnardóttir (1860-1947), but she lived here from 1898 until 1946. It was her grandson, Sæmundur, who remembered the location of the Well of the Irish when it had been lost for decades.

This monument was donated by the Women's Lifesaving Association Department (Slysavarnardeild kvenna) and unveiled on Fishermen's Day in 1986.  Written on it is a lovely prayer by Elínborg: 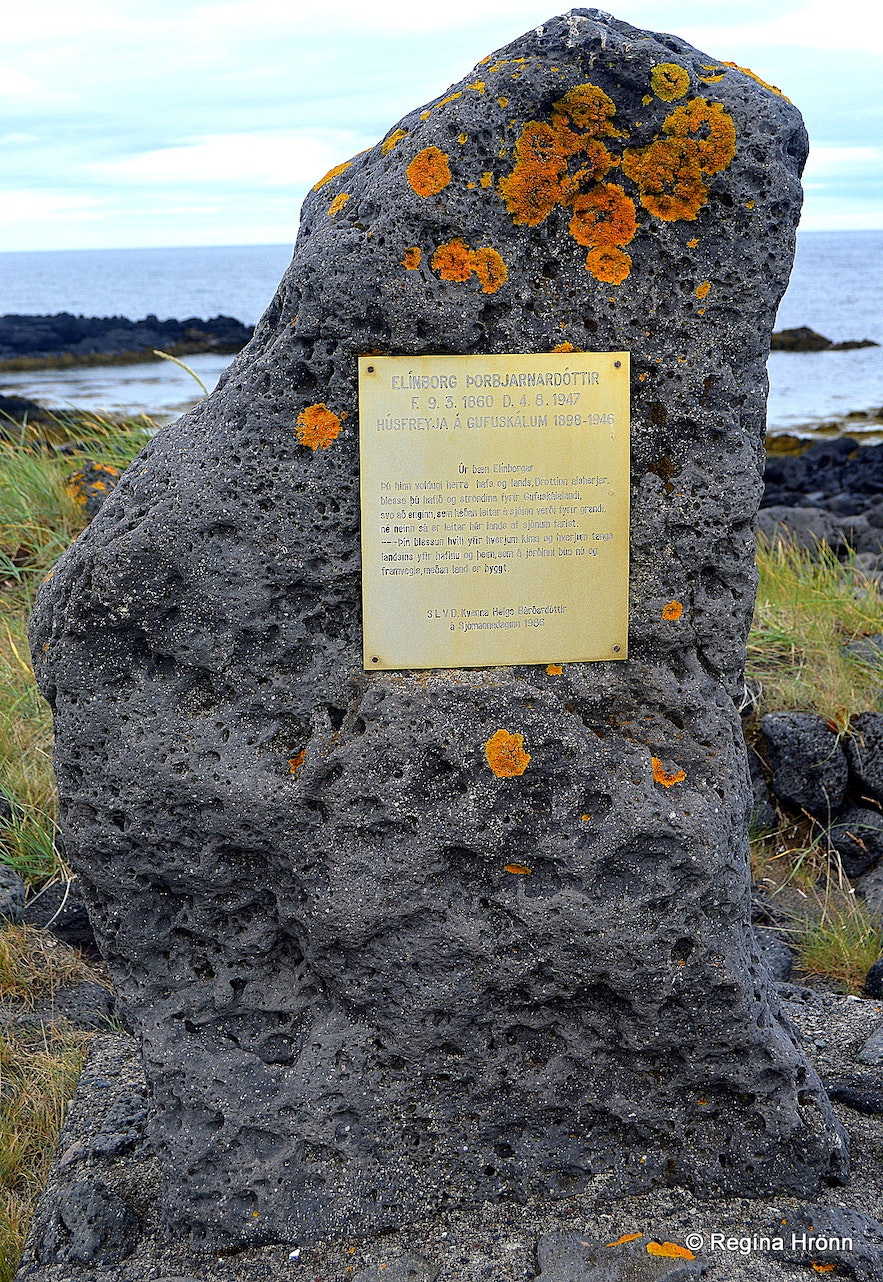 Remains of old fishermen's huts were discovered inside a sandy hill at Gufuskálar with loads of human habitation signs in the layers of debris.

At least 3 generations of huts from different periods of time were discovered according to "Fornleifakönnun á verbúðarleifum á Gufuskálum, Snæfellsnesi" - a Report on noninvasive archaeology on the remains of fishermen's huts at Gufuskálar, Snæfellsnes. 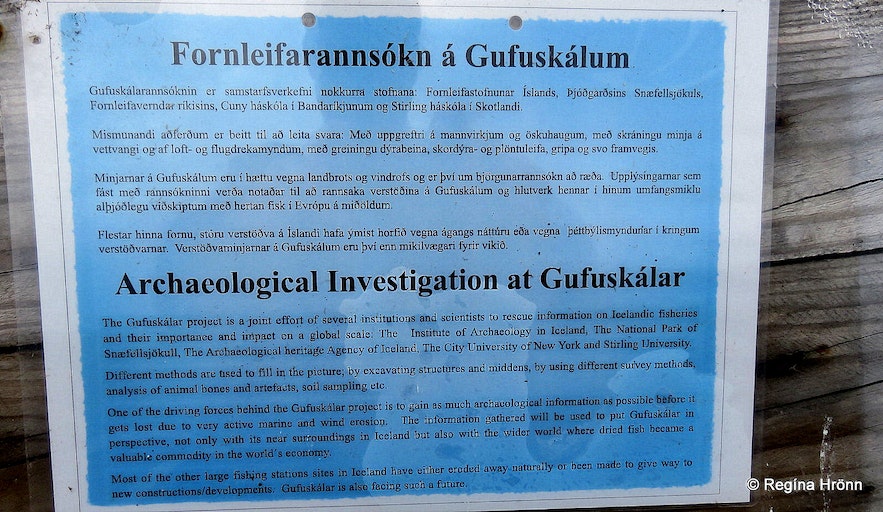 Iron, stone, glass, copper, and ceramics were discovered in the layers of debris along with old animal bones and big fish bones.

A turned chessman made of bone was discovered in the lowest (oldest) layer of debris and dates back to ca the 14th or the 15th century. 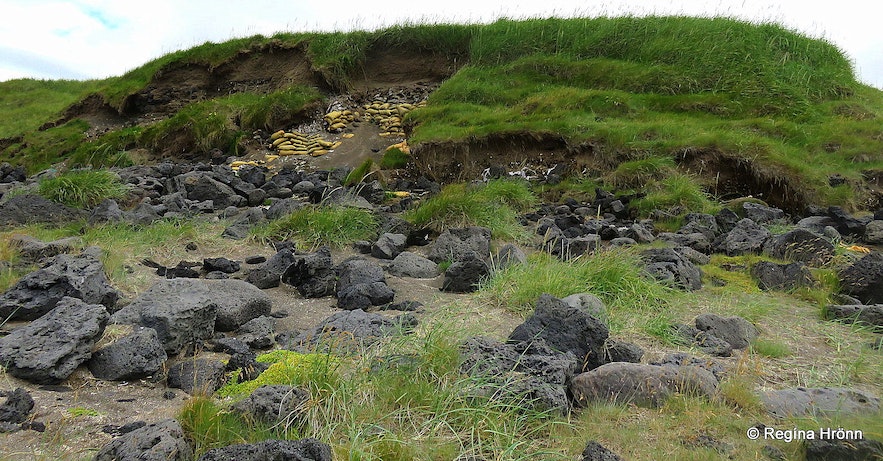 These antiquities are so close to the sea that there is a real danger that the sea might erode them. From 2008-2011 the erosion from the sea was vast and 1,5 meters eroded from another hill in this area!

I read a news article stating that 3 meters have eroded since 2008! So the archaeologists were racing against the forces of the Icelandic nature here.

You can see the yellow sandbags in my photo below, which were put here to try to protect Drottningarhóll - Queen's hill from the sea.

Unfortunately, the erosion continued and we seem to have lost some of our antiquities out to sea. These antiquities are invaluable as they show us the history of fishing in Iceland during this period. 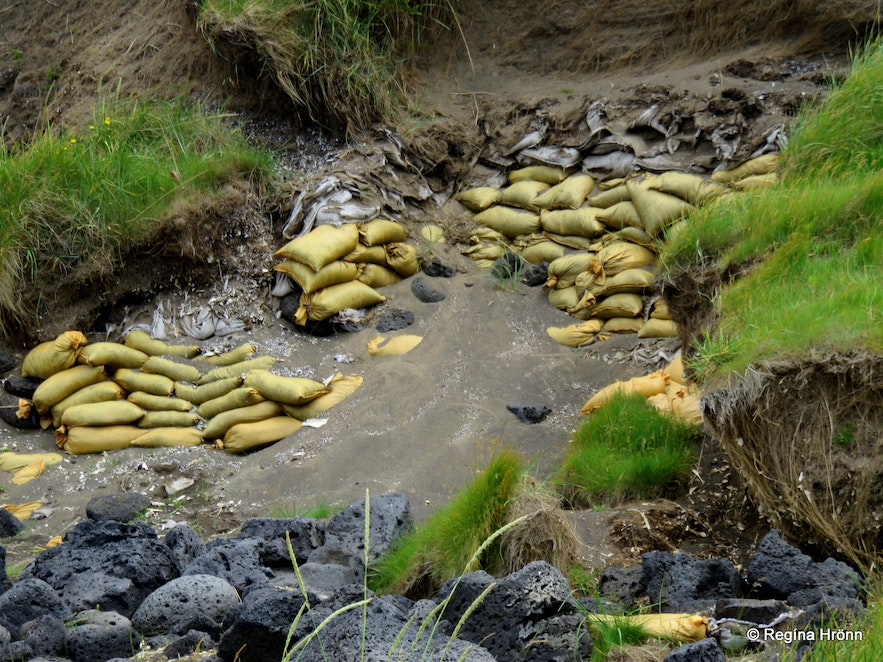 At Gufuskálar you cannot help but notice the very tall longwave radio mast. It is called Lóranstöðin - the Loren C mast and was erected in 1959 for the LORAN C localization system and the USA coast guard and NATO.

It was run by Póstur & sími and is now one of two long-wave radio masts of RÚV, which is our state-owned radio and TV station. The other mast is at Eiðar in East Iceland.

Kids in this area often practiced swaying on ropes in the mast.  Lóranstöðin has since 1997 been the main training station for Slysavarnarfélagið Landsbjörg rescue forces and the Icelandic police and fire brigade. 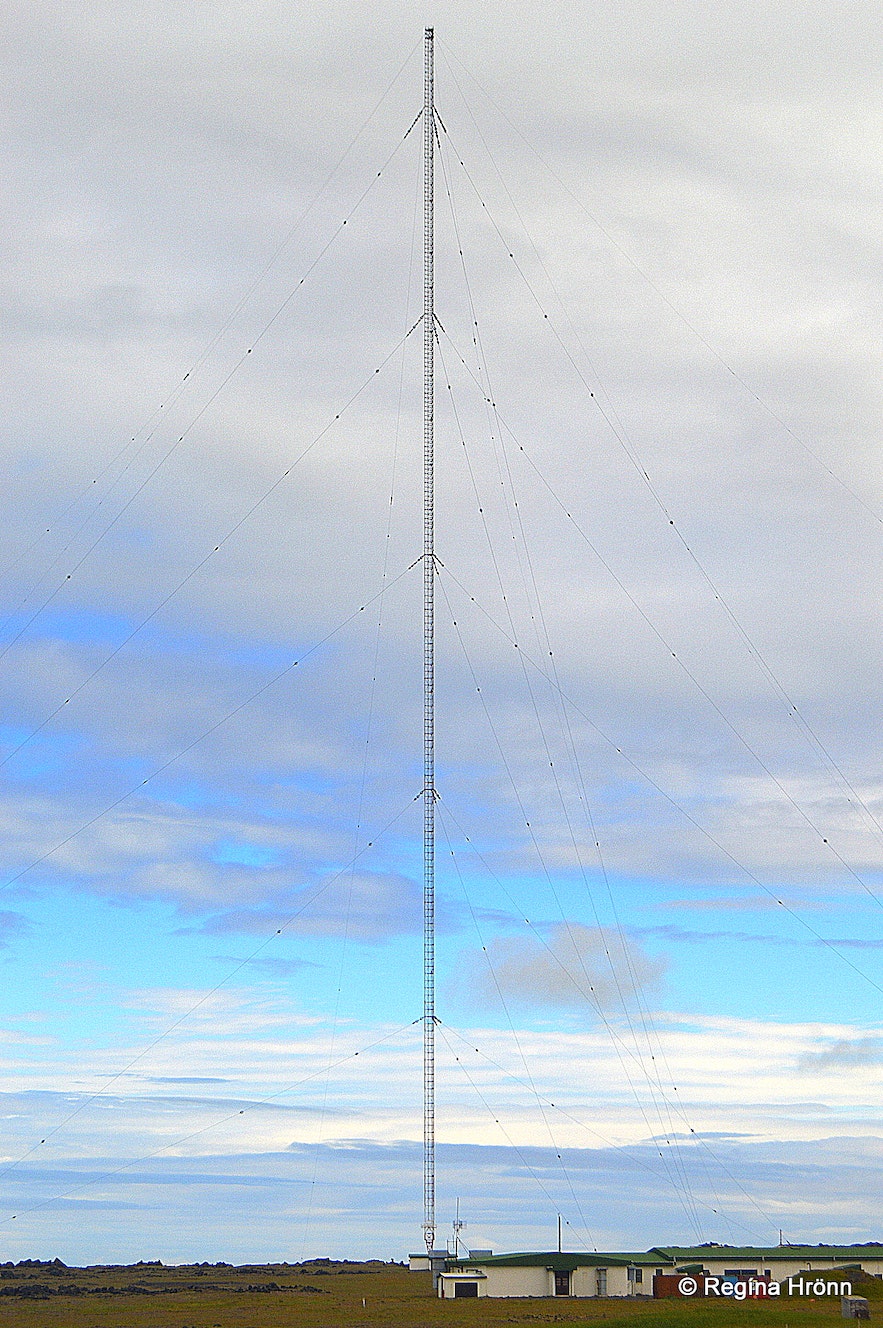 The Loren C mast was the highest mast of its kind in Western Europe, now the second-highest, and the highest structure in Iceland at 412 metres. The mast is a guyed radio mast and looks quite majestic.

Here you will find a selection of the many guided tours to the Snæfellsnes peninsula!

I have written a series of travel-blogs on Snæfellsnes as there is just so much history and places of interest everywhere you look: