I visited Landmannalaugar last summer when I joined a bus tour to this amazing location in the central Highland of Iceland. The tour is no longer available, but a similar tour; the Landmannalaugar Day Tour - the Pearl of the Highland is similar, even longer though as it lasts for 15 hours, 6 of which are free time in Landmannalaugar.

Landmannalaugar is one of the hidden pearls of Iceland, a truly magical place; with rhyolite mountains, glistening lava fields, and hot springs. 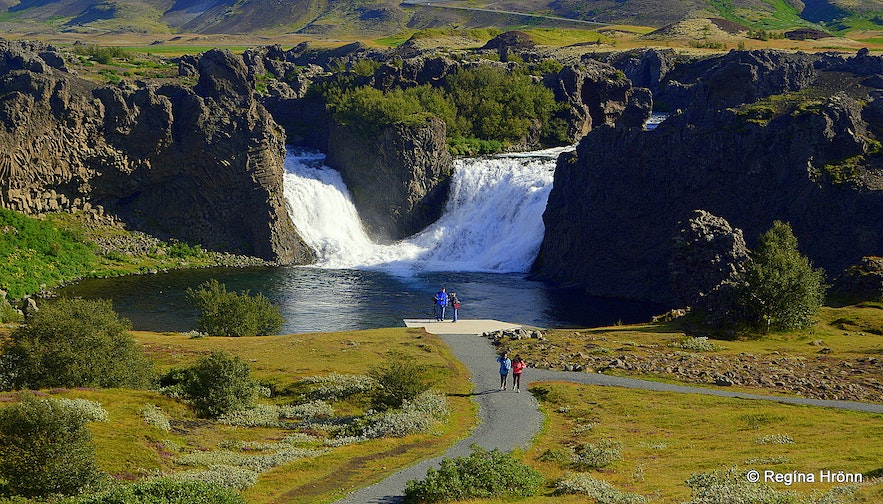 Our first stop was at Hjálparfoss waterfall in Þjórsárdalur valley up-country in South Iceland. Hjálparfoss is split in two with a beautiful pond in front and surrounded by extraordinary basalt rock formations, one in the form of a bear's head right next to the left waterfall.

On warm summer days, I have seen people swimming in the pond. Here we stopped for 20 minutes.

Our next stop was at Þjóðveldisbærinn Saga-Age farm, which is a hypothesis Viking turf longhouse, in the liking of the excavated ruins of a real Viking settler's farmhouse at Stöng in Þjórsárdalur valley.

By the Saga-Age farm, one of the scenes from the popular Game of Thrones  series was filmed. It was a very bloody scene when the Wildlings attacked the farm of peaceful farmers and killed all of them, but a young boy.

The entrance fee to the Saga-Age farm was included in the price of the tour. 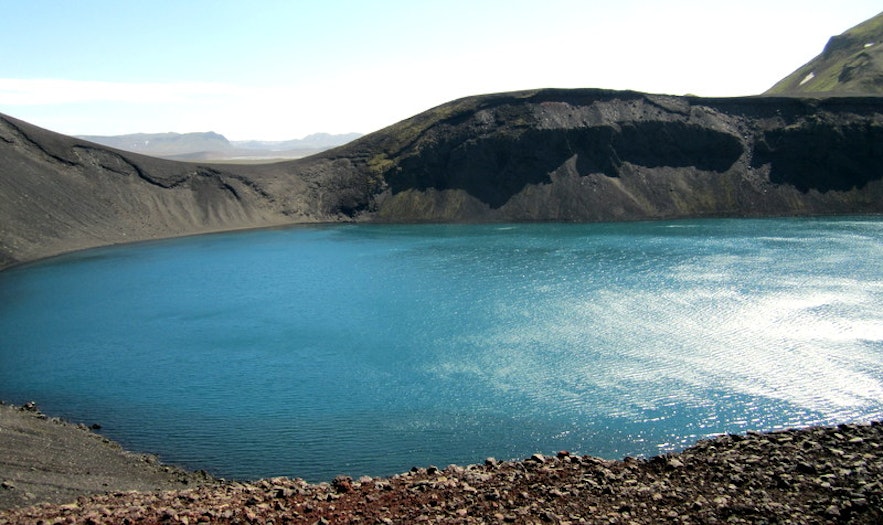 A crater filled with a lake on the way

From there we drove up to the highland. We passed several power plants, but there are many power plants here in this area, harvesting the energy from the rivers Þjórsá and Tungnaá.

We made two stops on the way, the first stop was at a view platform overlooking the wilderness and the other stop was at an extinct crater, which is now filled with a lake. Then we finally entered Landmannalaugar. 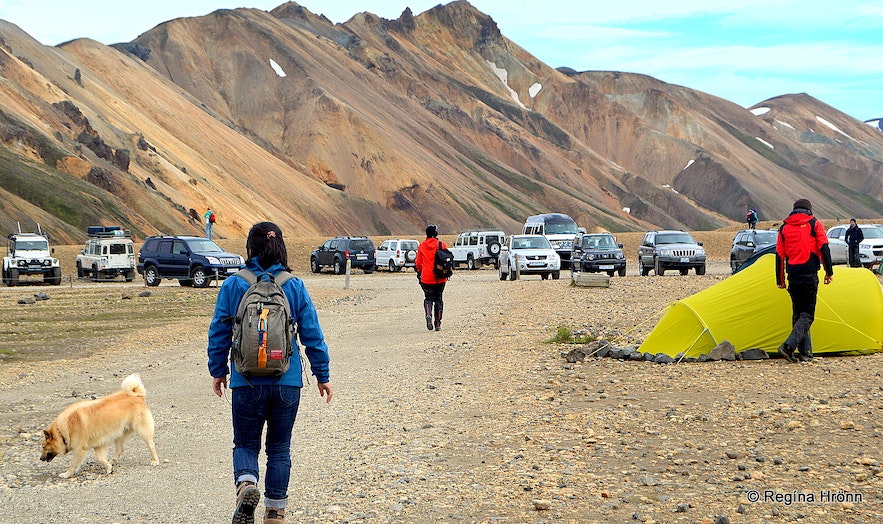 The biggest rhyolite mountain and the most characteristic of Landmannalaugar is Mt. Barmur. Its highest point is 900 meters above sea level.

Landmannalaugar is a very popular area and can only be reached during the summer months, i.e. late June - September. Outside of these months, you can only visit Landmannalaugar on guided super jeep tours and sightseeing flights.

The bus had to cross a river to get to the main area, and several cars were parked by the river, with people crossing the river on a footbridge. 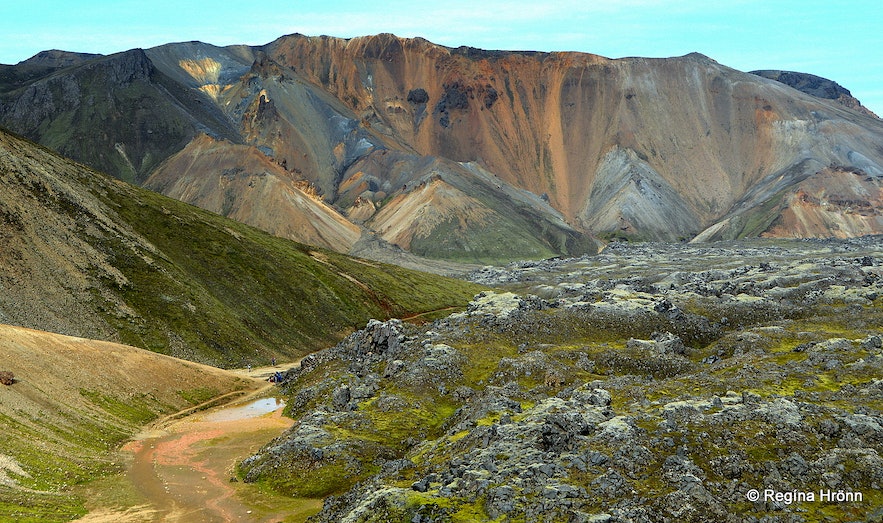 The colourful rhyolite mountains are the main attraction in Landmannalaugar. I always get a sense of awe when I enter this place. It has got the wow factor big time and one feels like entering into a magical world. Or at least I do.

There is a campsite in Landmannalaugar, but seeing that it is very hard ground here and rocky, there is no way to use tent pegs here. So rocks are used instead to keep the tents up. 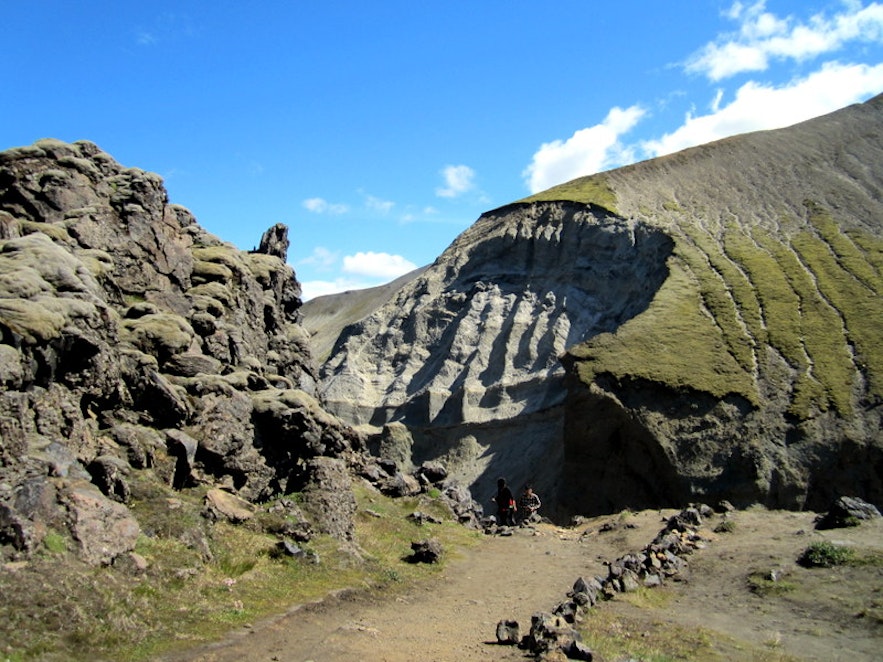 There is a ruggedly beautiful hike in Landmannalaugar, which we were guided through on this tour. That is the hike through Grænagil canyon, the canyon between Mt. Blàhnjùkur and Laugahraun lava field. It is a 1.5 - 2-hour hike through some fantastic terrain.

There are of course many hikes in Landmannalaugar, but as we were headed back to Reykjavík on the same day, we could only stop in Landmannalaugar for 4 hours. That was enough time to have lunch, go on the Grænagil canyon hike, and take a dip in the hot pool (for those who chose to do so). 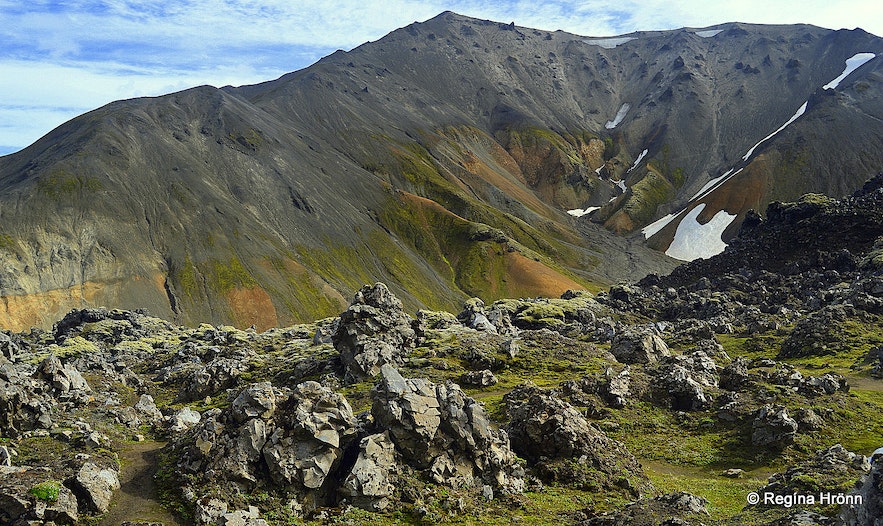 The path on the first part of this hike is a bit narrow, so it was somewhat difficult to meet people coming from the other direction. And the hike through the sharp lava is a bit tough, so keep your eyes on the ground and watch where you are going.

There have been accidents here and the rocks are sharp, so take care here and don't take photos until you are out of the lava area. Hiking shoes are needed for this hike. 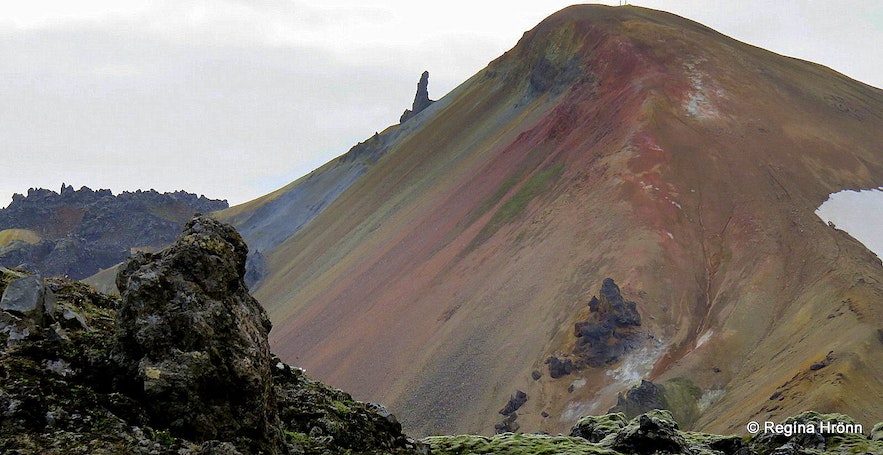 Landmannalaugar in the highland of Iceland - Brennisteinsalda

Just before we reached Brennisteinsalda mountain there was a big mud pool on the hill, with the obnoxious smell of sulphur filling the air. 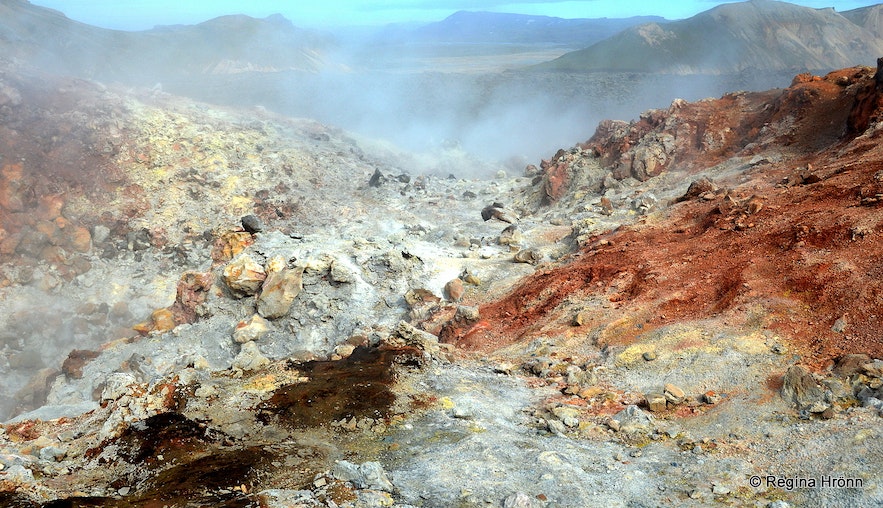 A geothermal area in Landmannalaugar

We now hiked back up to the Laugahraun lava field with beautiful glistening volcanic glass rocks - obsidian - at every footstep. 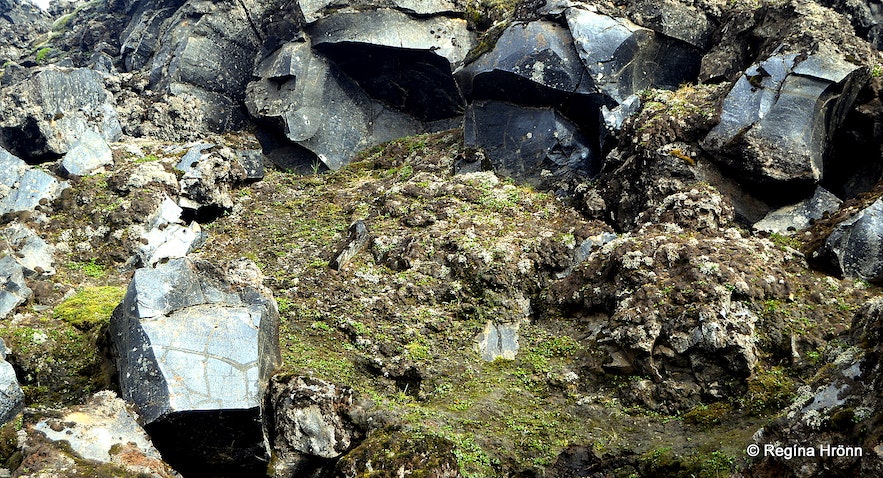 We finished this beautiful hike by descending on a very rocky path. I first joined this tour in 2012 and in 2016 I joined another similar bus tour to Landmannalaugar, and by that time there were changes being made to that rocky path, so hopefully, next time I visit Landmannalaugar it should not be as difficult to descend on the path. 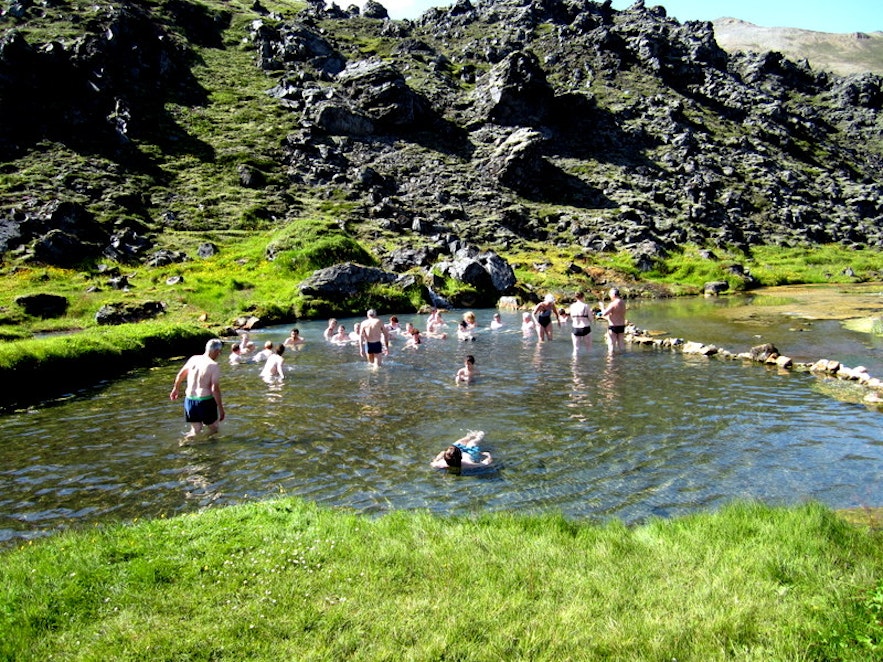 Bathing in geothermal water in Landmannalaugar

There are showers where one can shower and change clothes before bathing in the geothermal spring. Do shower as these geothermal pools can get filled with bacteria with so many people visiting them. Then one has to walk, wrapped in a towel, on the timber path leading to the geothermal pool. 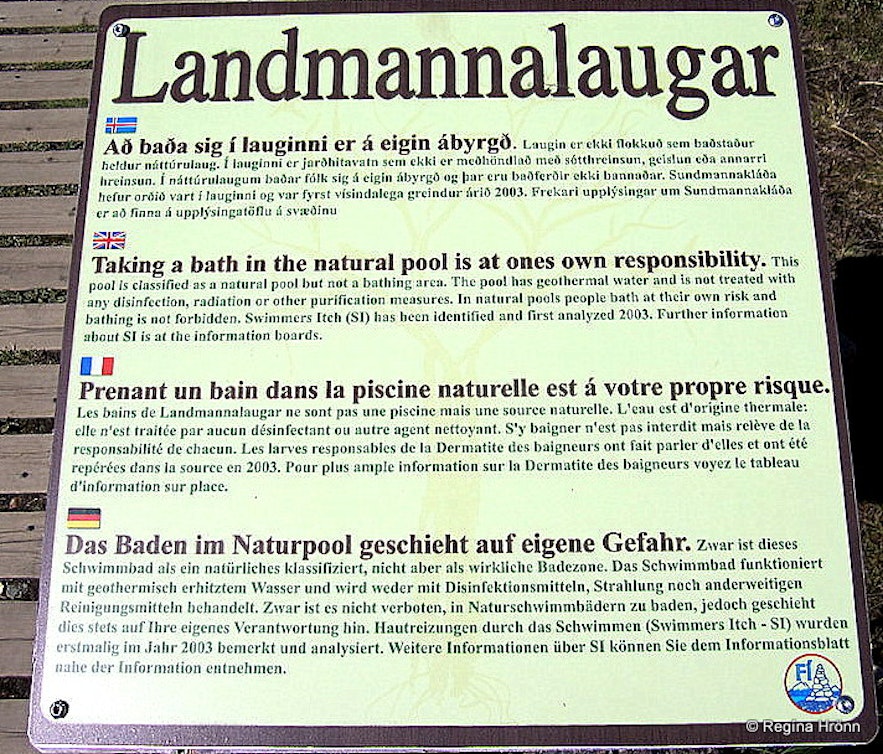 I stay out of this pool though as Swimmers Itch (SI) has been identified here. Back in 2003 and 2004 thousands of people got Swimmers Itch in this pool. It was traced back to a mallard with her ducklings.

After having stopped for 4 hours in Landmannalaugar we headed back. On the way back we made 3 stops, the first stop was a 10-minute stop by Frostastaðavatn lake just as you leave Landmannalaugar.  It is a lovely lake, and the most popular lake for fishing in this area, filled with Arctic char. 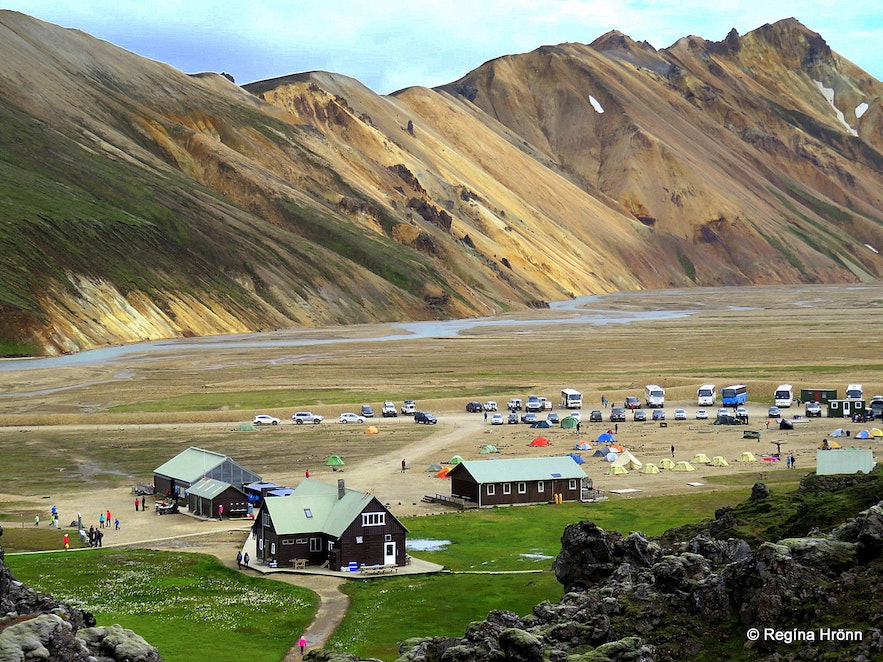 We took a different road back, which was in much better condition than the road we arrived on, which was quite a bumpy road in some places. On the way back we drove through highland nature, with a lot of mountains and barren landscapes, and spotted quite a few sheep.

We had to cross at least one river on this road, so a 4x4 is always needed when visiting Landmannalaugar. 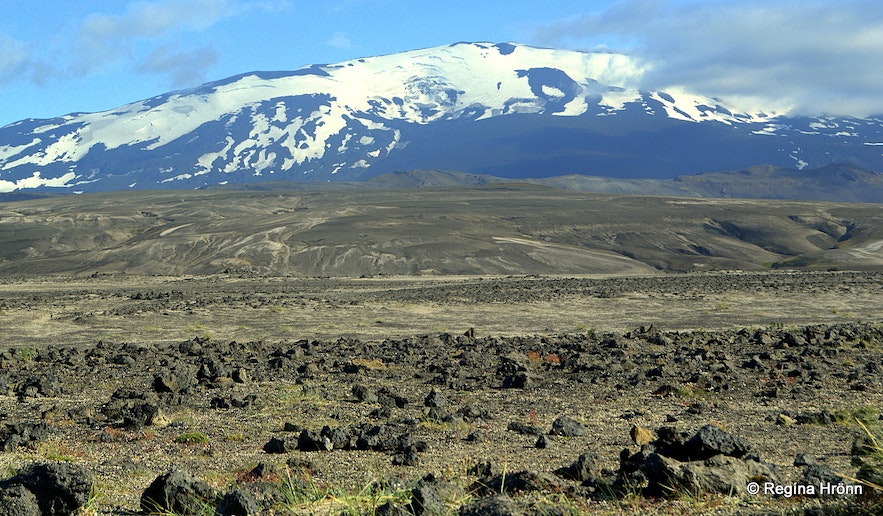 Our second stop was a photo-stop of Mt. Hekla volcano, as this road takes you very close to Mt. Hekla, which is one of Iceland's most active volcanoes. Hekla has been referred to as the gateway to Hell and one never knows when Hekla is going to erupt again, she is due to erupt now ...

Our final stop was at a gas station where we stopped for 15 minutes and had a coffee break. Then we headed straight for Reykjavík and the passengers were dropped off at their hotels. 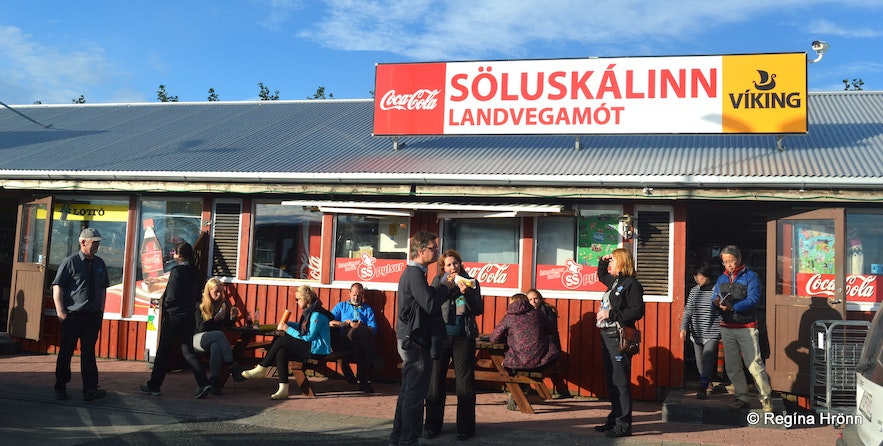 Visiting this part of the highland of Iceland should not be missed; here one gets to see amazing nature, vast lava fields, glistening obsidian, beautiful rhyolite mountains, and bathe in a hot spring - all in one day.

Here you can see all the available Landmannalaugar tours.

Or if you want to drive there by yourself you can rent a car in Reykjavík: a 4x4 is needed.

I have written another travel-blog about a second tour I joined if you'd like to see better photos of Landmannalaugar: Landmannalaugar, a Geothermal Tour with breathtaking Rhyolite Mountains.

Have a lovely time at the beautiful Landmannalaugar :)