Ruins of a real Viking Settlement-Age farm, Stöng, can be found in Þjórsárdalur valley. Some of the Vikings settled in in the valley, unaware that they were in the proximity of the notorious volcano Hekla - the Queen of Icelandic volcanoes.

Mt. Hekla erupted for the first time after the Settlement of Iceland in 1104 causing the devastation of some 22 settlement farms in the Þjórsárdalur valley.

In 1939 a Nordic team of archaeologists excavated the exceptionally well-preserved ruins of Stöng, which had been hidden away for 835 years under massive layers of pumice. This was the first time a group of trained archaeologists researched Icelandic ruins.

Several of the farms were excavated and examined, but only one remains above ground, Stöng, the others were covered over again. 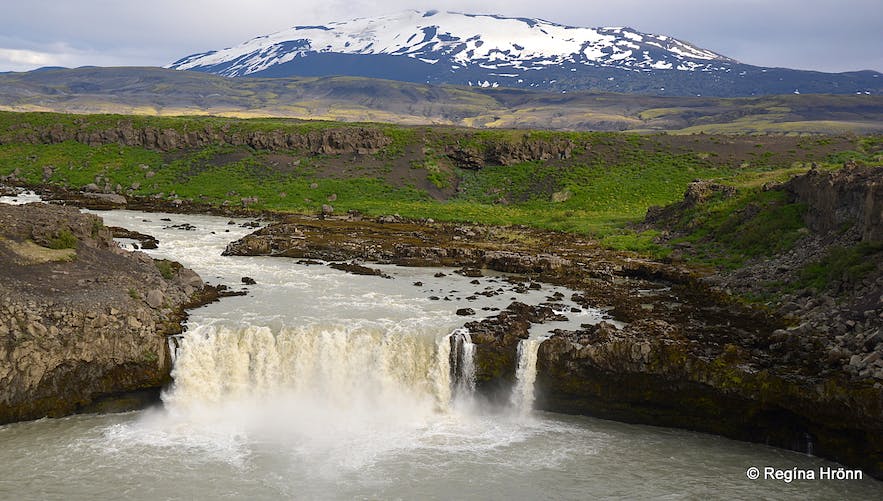 Mt. Hekla in the background of Þjófafoss waterfall

It is believed that people lived at Stöng almost continuously until around 1300 though when Mt. Hekla erupted again. Other factors are also believed to have contributed to this place becoming desolate, other than the tephra covering the land, f.ex. cold weather.

The latest eruption in Iceland though is in Geldingadalir valley on the Reykjanesskagi peninsula in SW-Iceland. 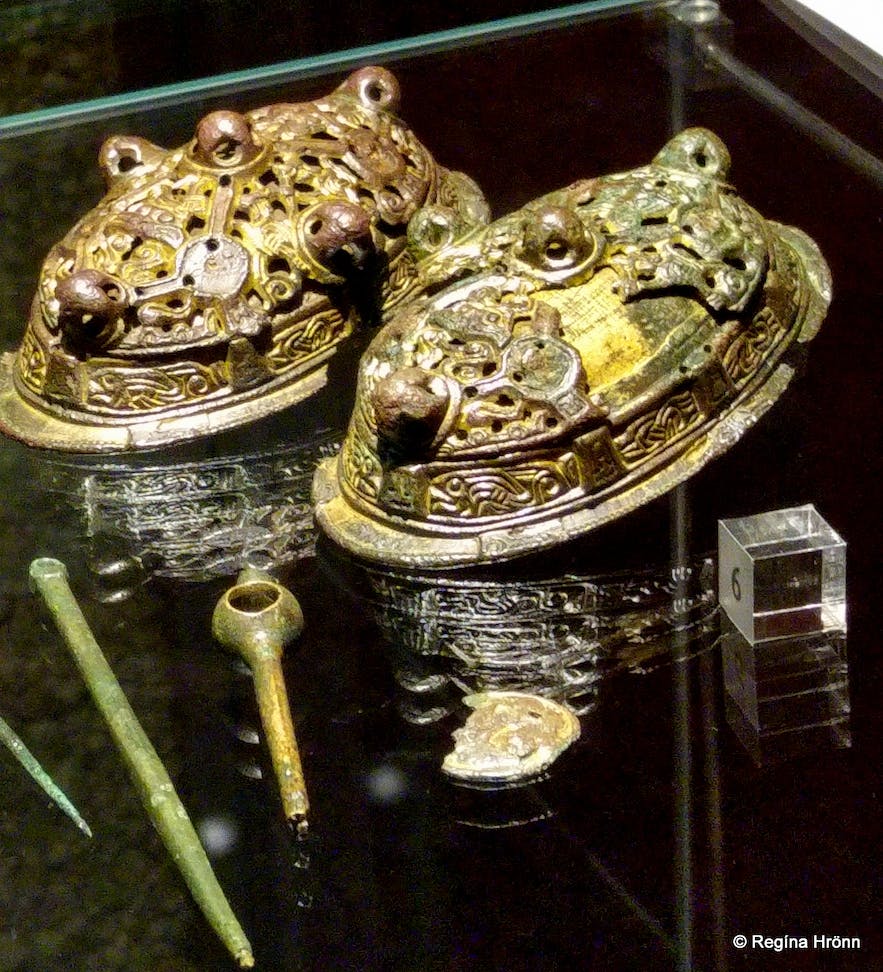 Viking stuff from Stöng at the National Museum of Iceland

I love the ornamental Viking brooches and own a replica of them, but such brooches have been found in several places in Iceland. 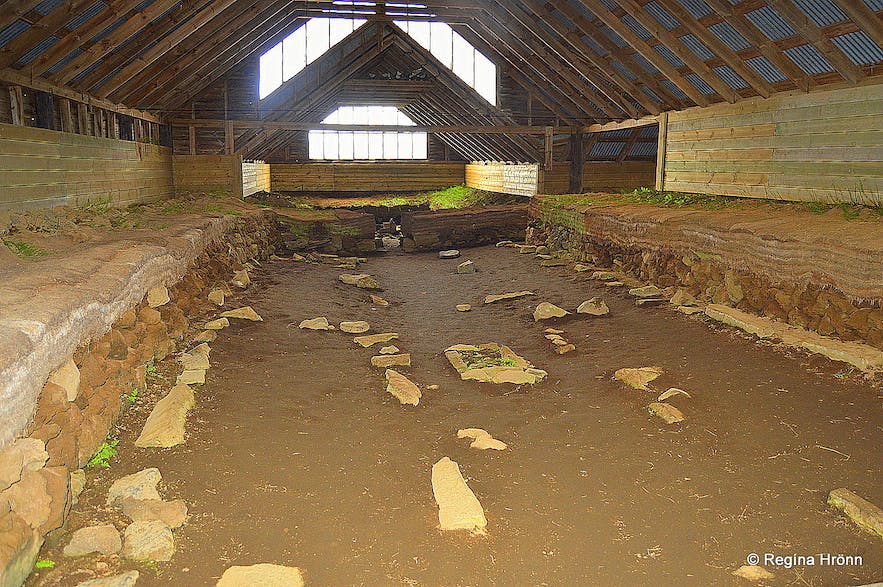 What you can see here at Stöng are stone foundations of a Saga-age farm, covered by a protective wooden shelter with a red roof, which was added in 1957.

Inside you will find the entrance, the hall (skáli) with a long-fire, a pantry, a living room, and a big toilet room. People worked and ate in the skáli by the longfire, and slept in the hall, their beds were on each side of the hall. In the smaller room, furthest away in my photo above, was a loom.

The room to the right is thought to be the pantry with dug-down containers for dairy products (soured meat). 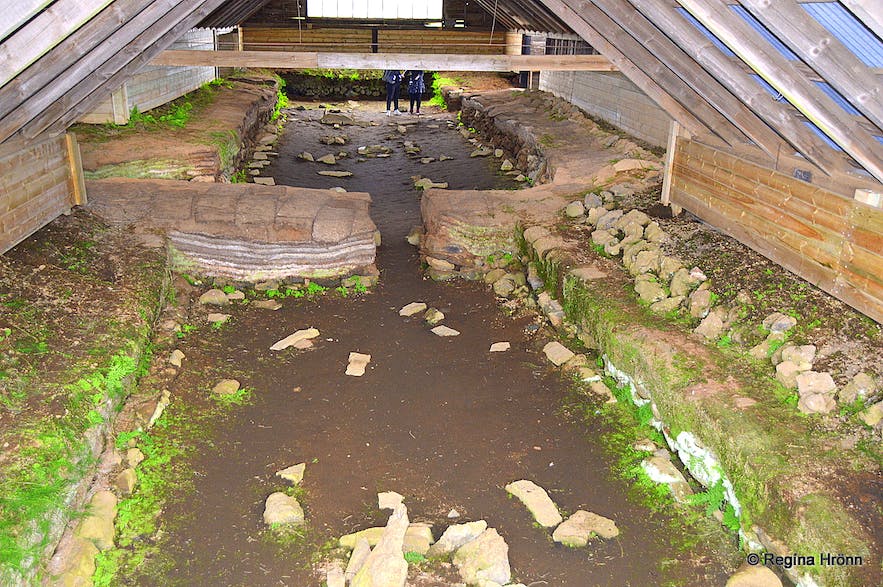 I took the photo above from the window outside. It shows the archaeological ruins of Stöng from the opposite side, looking into the living room, where the loom was, but approximately 20 loom weights were discovered here.

The turf is not original. I have seen people running and stamping on the turf, but let's show utter respect here inside this old Viking longhouse. Stöng is amongst Iceland's best-known archaeological sites. And here the second generation of Vikings lived. 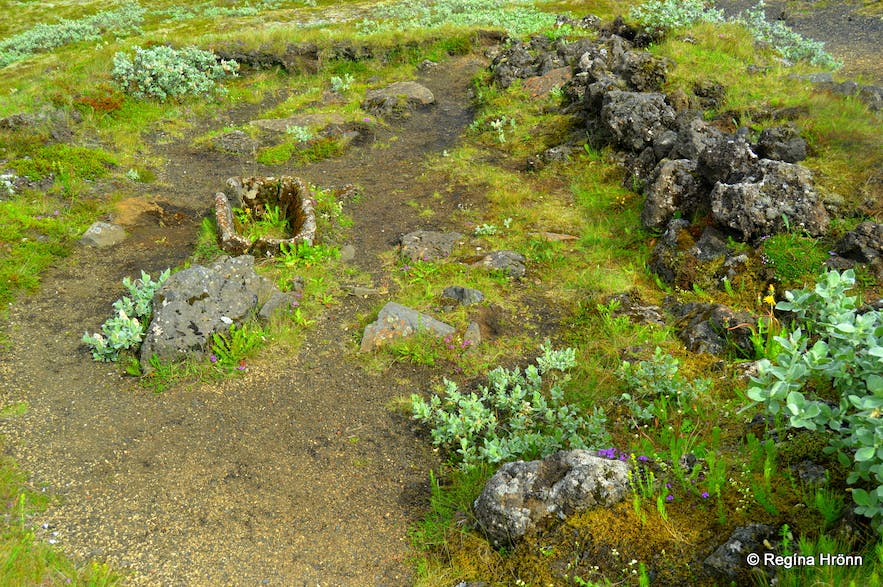 Ruins of a stall, a barn, and a smithy were also found during the excavations back in 1939. These ruins are uncovered.

Church ruins and a churchyard were revealed much later on. And ruins of an even older farm beneath Stöng farm.

My husband's uncle and I visiting the ruins of the church

A visit to Stöng is included in the Hidden Circle tour - I have written another travel-blog about that very interesting tour The Hidden Circle of Iceland - the Golden Circle with a very pleasant Twist.

The Viking Gaukur Trandilsson lived at Stöng. He is mentioned in the Saga of Njáll, but his Saga is unfortunately lost.

In Þjórsárdalur on a protruding cape called Gaukshöfði ancient bones were found in the 19th century, which might as well be the bones of Gaukur, might not. The cape is right by the road so it is easily accessible. 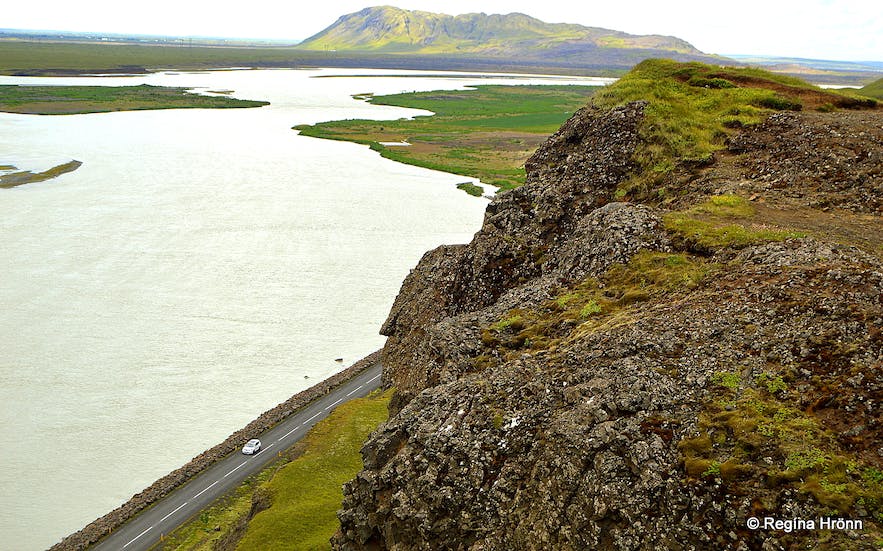 The view from Gaukshöfði cape

It is possible to walk up to the top of the cape, where there is a fantastic view of Þjórsá glacial river, Iceland's longest river, and of the surrounding area.

Þjóðveldisbærinn (Commonwealth Farm) Saga-age farm is a reconstructed medieval farmhouse, a full-scale replica of the excavated ruins of the real Viking settler's farmhouse at Stöng in Þjórsárdalur valley.

In 1974-1977, on the 1100th anniversary of the Icelandic settlement, Þjóðveldisbærinn was erected close to where Stöng farmhouse was excavated. But much more easily accessible. 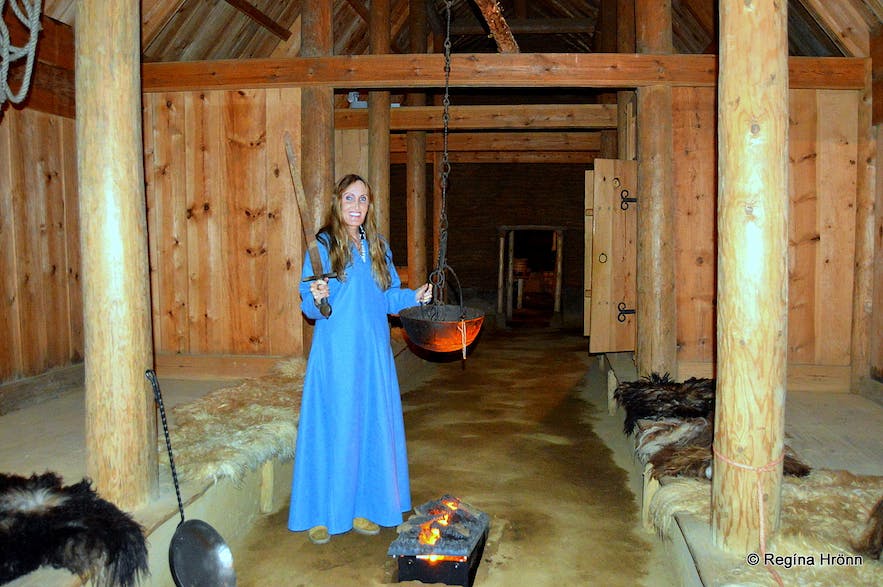 You can dress up like a Viking at Þjóðveldisbærinn

This farm is a "must-see" when visiting this area, there is something so magical about this place like you have just popped in for a visit to a Viking chieftain.

Inside the farm in the middle of the main hall, you will find a longfire. By it, the inhabitants worked, rested, ate, and told stories. 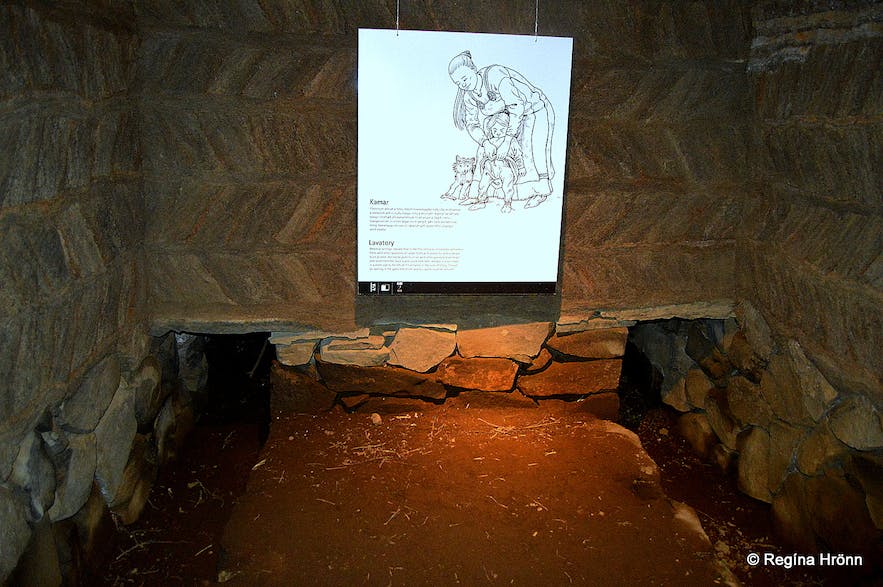 Here one can see how the second generation of the Vikings lived. You will find an entrance, a dining area, a sleeping area, a working area, a toilet room, and a pantry - an exact replica of the Stöng archaeological site.

There is no guidance inside Þjóðveldisbærinn, but you can dress up in Viking clothes, and hold swords and knives which is a great photo opportunity.

Walking between some of the rooms of Þjóðveldisbærinn is strange as the ceiling in the corridors is really, really low. 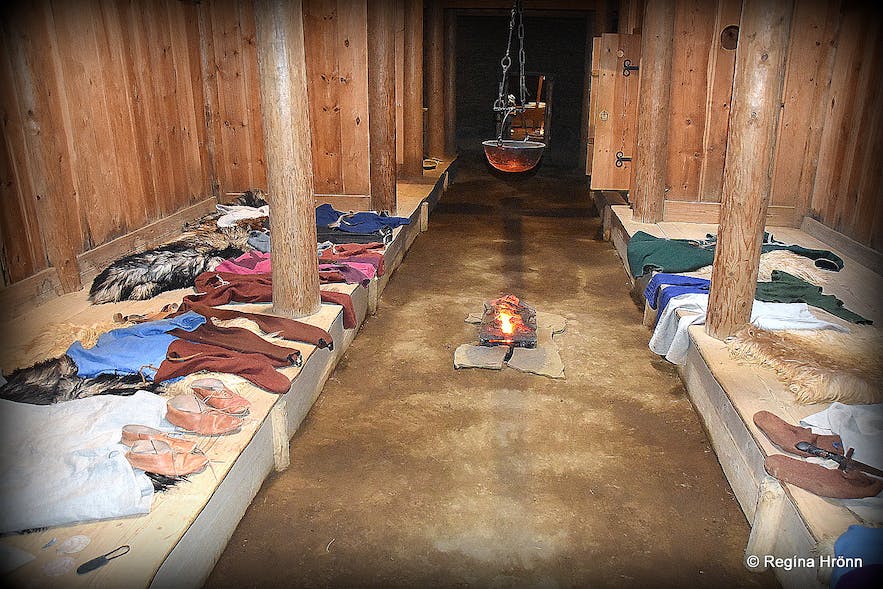 I tend to bump my head a lot when walking inside turf houses. People were considerably smaller in the olden days as times were harder.

I have written a long list of the turf houses I have visited in Iceland, so you can see how many times I have bumped my head during my travels in Iceland ;) 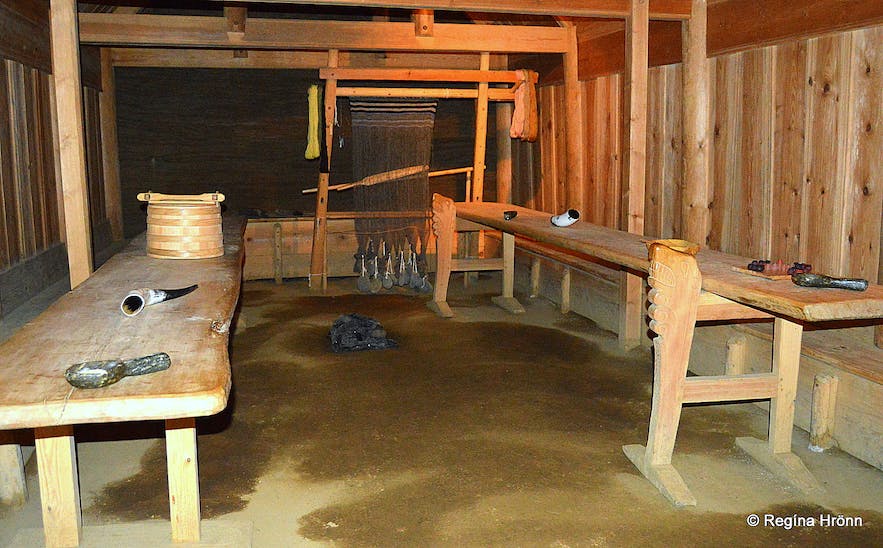 A church was erected by Þjóðveldisbærinn Saga-age farm and consecrated in the year 2000 to celebrate the 1000 year anniversary of Christianity in Iceland.

It is a small turf-church, built in the liking of the church excavated by the farm at Stöng - or what we think it might have looked like.

A small, serene waterfall can be seen next to the Saga-age farm. It is such a beautiful setting! And the distinctive Hjálparfoss waterfall is only a stone-throw away. 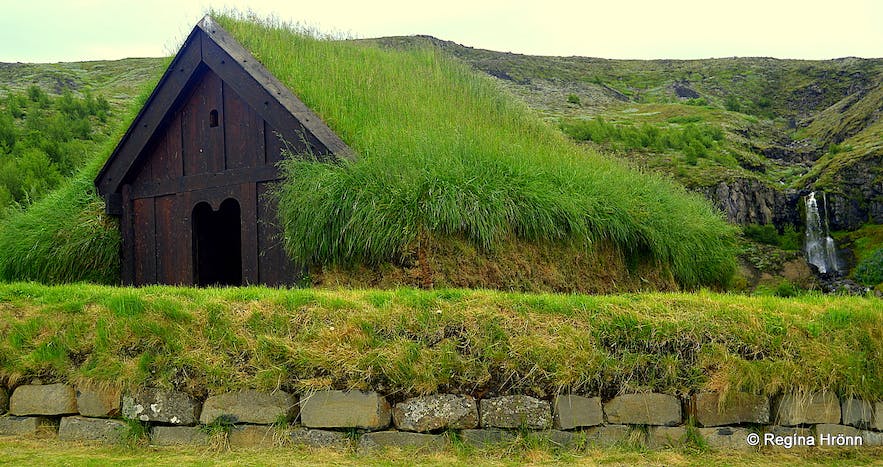 The turf church by Þjóðveldisbærinn

The church is open and it is really small, showing that the Vikings were smaller than people today. Watch your head!

The church belongs to the congregation of Stóra-Núpsprestakall benefice and the Icelandic state owns both the Saga-age farm and the church.

A scene from the TV series Game of Thrones  was shot at this location. A very violent scene, where all the inhabitants of the farm were killed by the Wildlings, but a small boy.

I have written a special travel-blog about the Game of Thrones locations I have visited in Iceland, where you can watch the scene shot at Þjóðveldisbærinn: 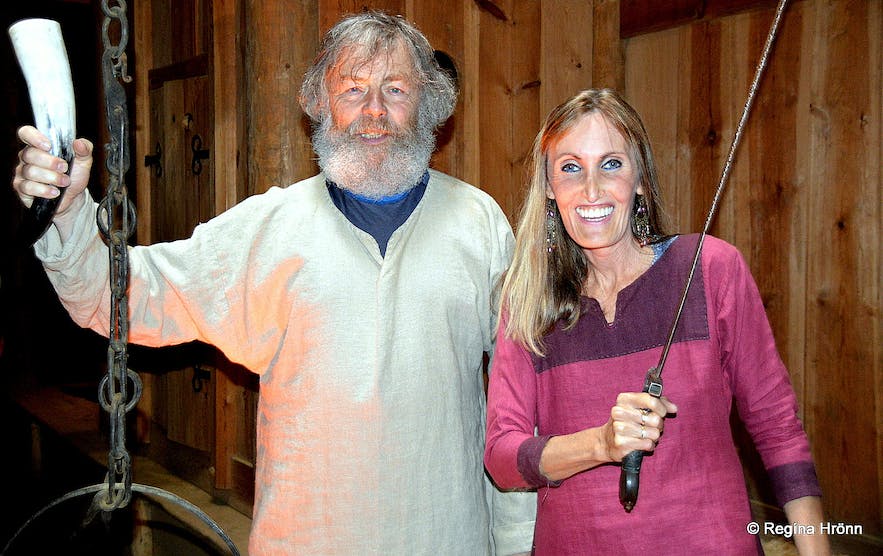 Dressing up with my husband's uncle, Jón, at Þjóðveldisbærinn

A visit to Þjóðveldisbærinn is included in The Vikings & The Sagas | A Tour Through History, a wonderful guided Viking and Saga tour which I have joined and recommend. 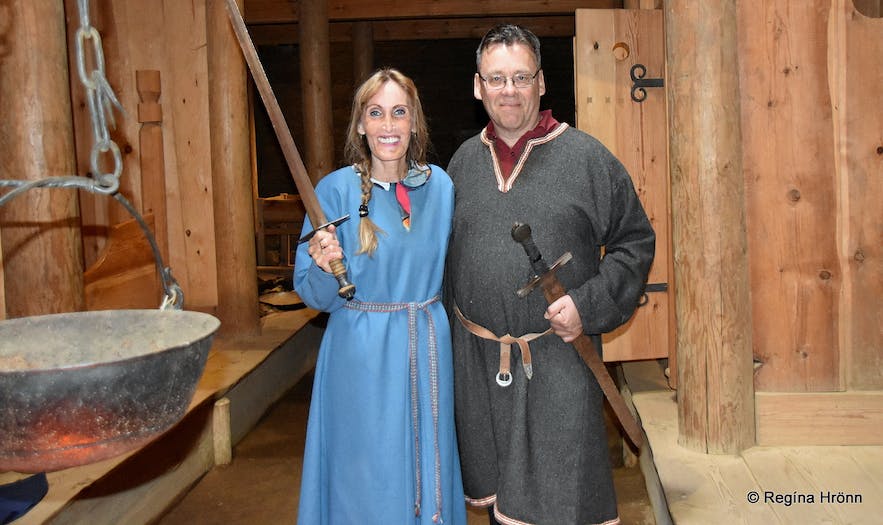 With the wonderful guide Kjartan of Glacial experience, who took me on the Vikings & the Sagas tour. Kjartan is my 3rd cousin

This tour will take you to Hjálparfoss waterfall, Þjóðveldisbærinn, and to the most important locations of Njálssaga - the Saga of Njáll - Hlíðarendi and Bergþórshvoll where Gunnar and Njáll from the Saga of Njáll lived. And end with a dinner at the Viking Village.

Kjartan is an expert in the Sagas, so it was a delight being guided around the Saga locations by a fellow Saga-enthusiast :)

Notice how Þjóðveldisbærinn blends perfectly in with nature

The Saga-age farm is open daily from June 1st until August 31st. Check out the website of Þjóðveldisbærinn for more information. And remember the Icelandic word Þjóðveldisbærinn - which is a bit of a mouthful, I know, - as you have to follow that sign.

A little bit further down the road from Þjóðveldisbærinn is the Búrfell Hydropower Station. 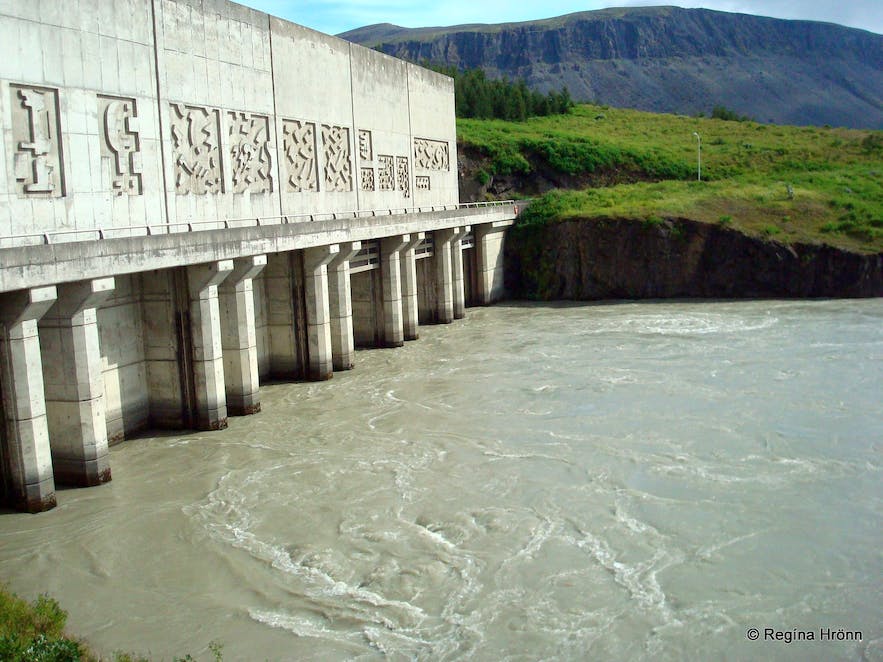 Búrfell Hydropower Station is Iceland's second-largest hydropower station. It is second only to the Kárahnjúkar hydropower plant. Some 800 people worked on building this massive structure, which was the biggest construction, Icelanders had undertaken.

It was opened in 1970 and harnesses the glacial river Þjórsá - Iceland's longest river.

They had a part in building and running the Saga-age farm and left-over concrete from the dam was used for making a swimming pool in the valley. You can see the swimming pool, Þjórsárlaug, in my photo above, but it is now closed to visitors and forbidden to swim in it. 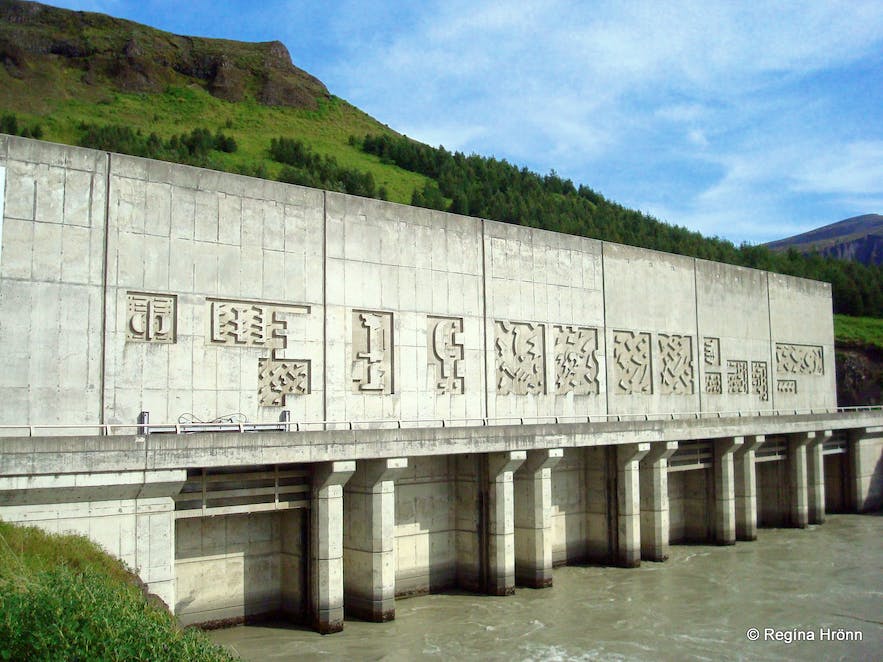 Notice the mural decorations on the Station, they are the largest of their kind in Iceland, made by the artist Sigurjón Ólafsson. 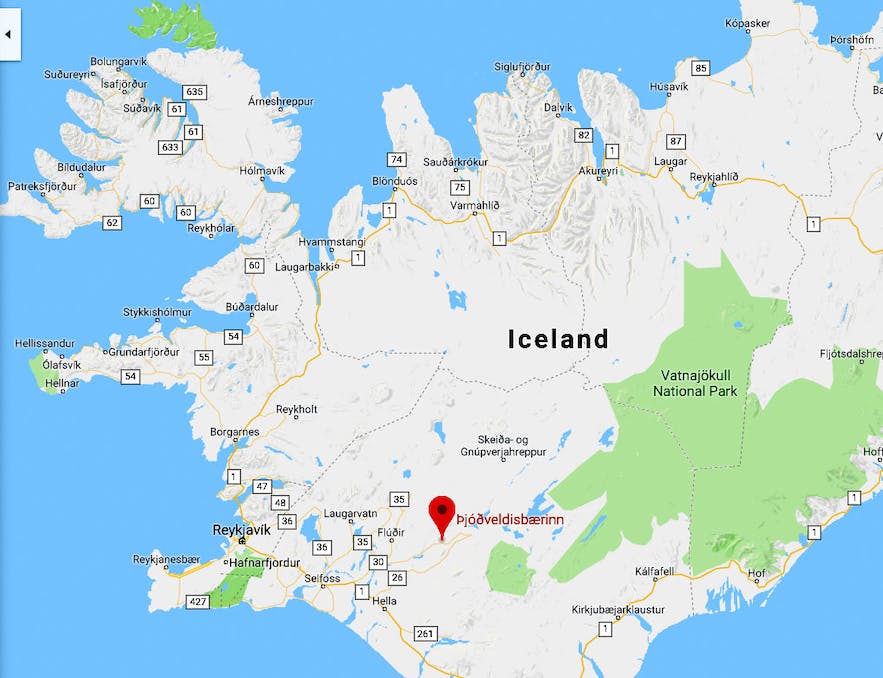 The distance from Reykjavík to this beautiful place is 122 km. You can rent a car in Reykjavík   and go there on a day tour.

The road to Stöng is a bumpy gravel road, at times in a bad condition so a  4x4  is needed here. But a 2WD suffices for the reconstructed Saga-Age farm as the road is paved all the way.

Or you can choose to be guided around this area with the knowledgeable guides of the aforementioned  The Vikings & The Sagas | A Tour Through History, which takes you to Hjálparfoss and Þjóðveldisbærinn together with many other interesting Viking and Saga locations.

Another tour by the same tour company is called the Hidden Circle and will f.ex. take you to Hjálparfoss waterfall and Stöng and also to the 3rd highest waterfall in Iceland, the magnificent Háafoss waterfall. I  have also joined this tour and can recommend it.

See also my other travel-blogs about places of interest in this part of Iceland:

Háifoss Fall and the beautiful Waterfalls in Fossá River in Iceland

Have a lovely time in Þjórsárdalur valley :)