There has been a farm in Möðrudalur since the settlement of Iceland and one of the leading farms of Iceland was located here in the olden times. Important crossroads were in this area, the Trail of the Bishops and the Trail of Sámur, but you can read about Sámur in the Viking Saga Hrafnkel's saga freysgoða - the Story of Hrafnkell, Frey's Priest.

Some ancient farm-ruins have been discovered north of the farm in Möðrudalur, which have been declared as protected. The farmland here at Möðrudalur is one of the most extensive in the country.

Möðrudalur, which is located north of Vatnajökull glacier, is mentioned in other Sagas, f.ex. in the Saga of Grettir the Strong (ca 996 - ca 1040), whom I have told you about in other travel-blogs.

Grettir was a belligerent Viking, who was an outlaw in Iceland for almost 20 years. He lived in several locations around Iceland during his outlawry and for one summer he stayed outside on Möðrudalsheiði heath and in other places in the vicinity. 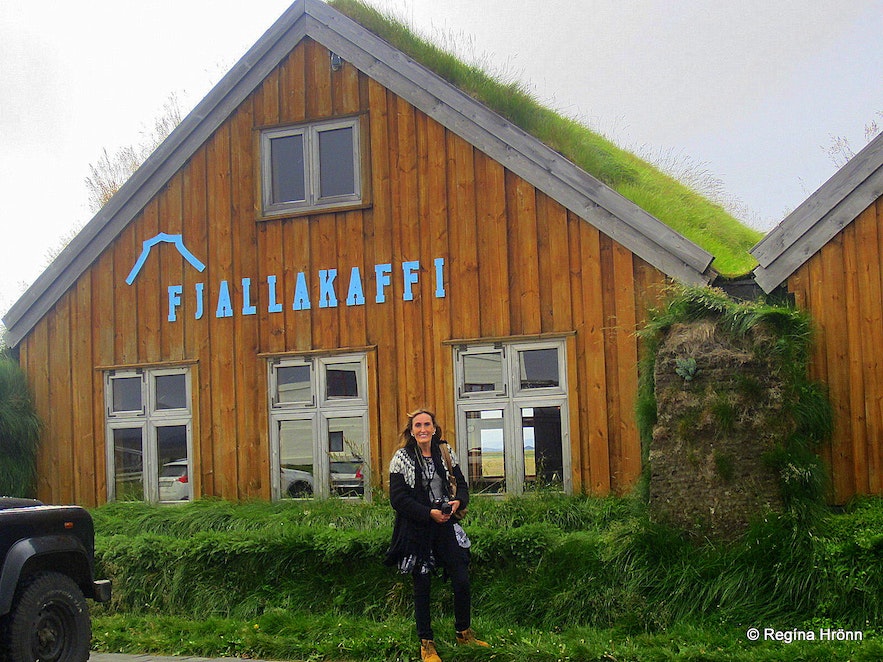 Grettir the Strong and the Troll in the Waterfall

Grettir the Strong would never have been able to survive on Möðrudalsheiði heath in the wintertime as it gets very cold so high up in the highland of Iceland.

The lowest temperature recorded in Iceland, -38 degrees C (-36.4 degrees F) was recorded in Möðrudalur, and at the same time at Grímsstaðir á Fjöllum close by, on the 21st of January 1918, but that winter was so cold in Iceland that it has gone down in history as Frostaveturinn mikli or the Winter of the Great Frost. 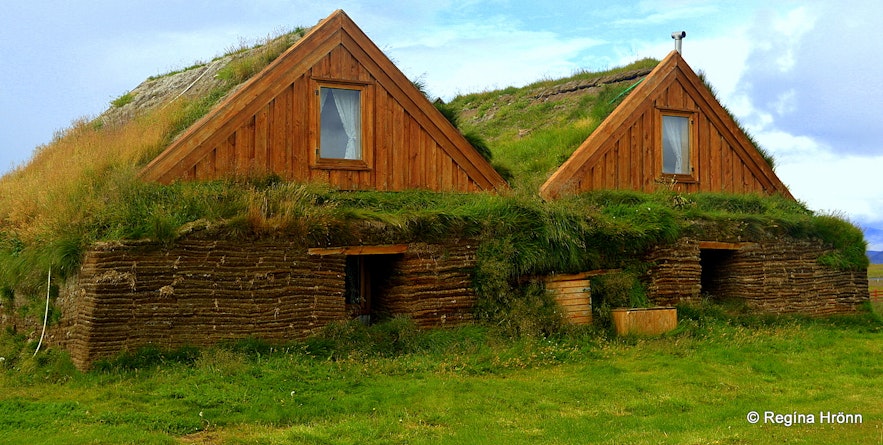 But Vilhjálmur Vernharðsson, the son of the owners of the farm, who by now was living in Reykjavík, decided on building up his birthplace. Vilhjálmur's ancestors had lived on Möðrudalur farm since 1875 and Vilhjálmur couldn't bear the thought of his family's farm being abandoned.

Vilhjálmur's friends thought he had gone mad, moving to Möðrudalur after it had been cut off from ring-road 1, but I am glad that he took the risk as Möðrudalur is thriving today, with a restaurant, accommodation, guided day-tours, 100 sheep and 14 goats.  Kudos to Vilhjálmur and his wife Elísabet Svava Kristjánsdóttir! 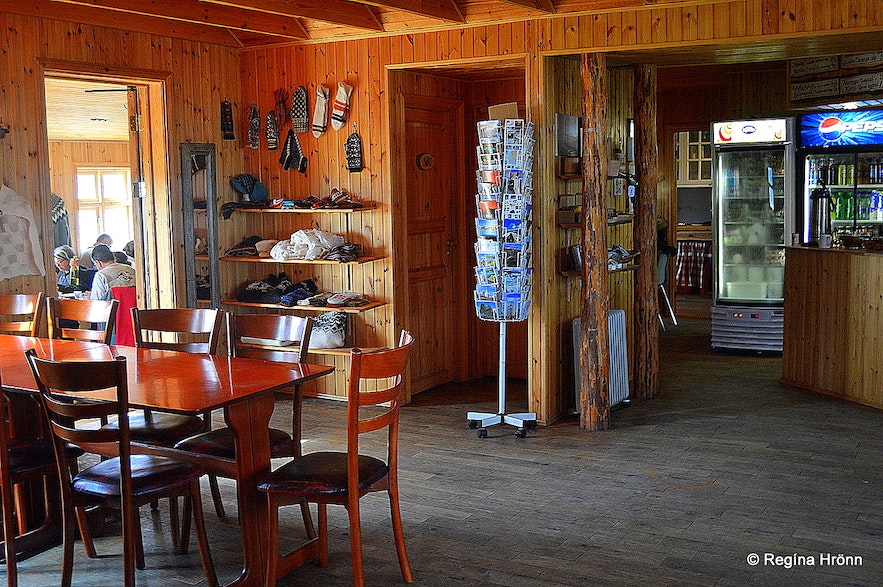 Here high up in the wilderness of Iceland you will find the restaurant Fjallakaffi or the Café in the Mountain, which serves traditional local food. Although being so far away from everything, as it were, Fjallakaffi is well known across Iceland for its locally sourced, traditional food.

Icelandic sweaters for sale at Fjallakaffi

For sale at Fjallakaffi, you will find the traditional Icelandic woolen sweaters — which can come in handy in the highlands, as once in July when I was visiting Fjallakaffi it snowed on us!

Notice the black cloud in my photos of the church - this cloud turned into snow a little bit further on.  I know that Möðrudalur is located high up in Öræfi, but I was not happy to see snow in July.

You will find a lovely little church at Möðrudalur, Möðrudalskirkja, built in 1949 by the farmer Jón A. Stefánsson (1880-1971). Jón built this church in memory of his deceased wife, Þórunn Vilhjálmsdóttir, who died in 1944.

Jón built and decorated this church himself, and even painted the altarpiece, which depicts Christ and the Sermon on the Mount.  What a lovely gesture :)

There hadn't been a church in Möðrudalur for 22 years when Jón decided on building this memorial church on the foundation of the old church. Once there was a vicarage in Möðrudalur, but when the farm was abandoned in 1716 for some years the vicarage also moved away. 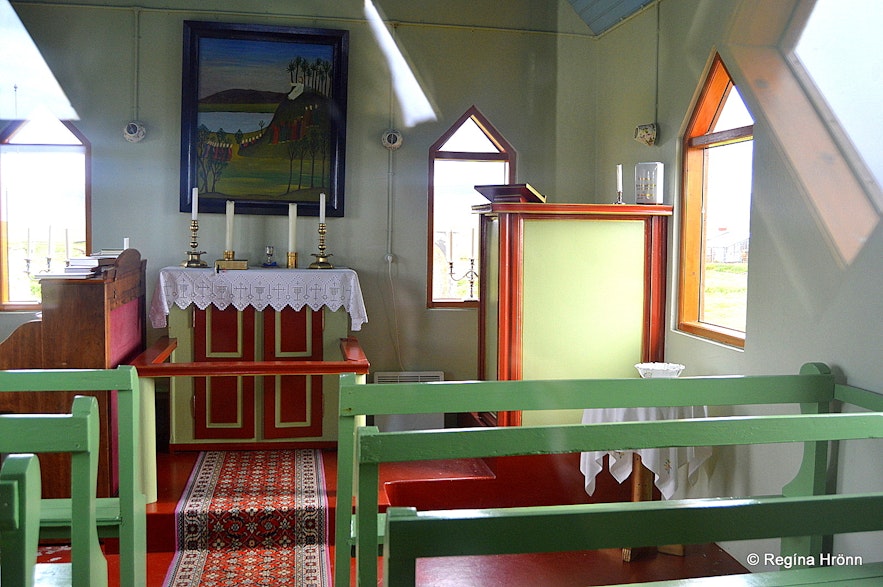 Möðrudalur farm offers accommodation for up to 27 people, and 14 people at a time can stay in two houses called the Baðstofa. More people can stay at Möðrudalur in the summertime when the campsite is open. Visitors can book guided day tours at Fjalladýrð tourist services and explore the vicinity. 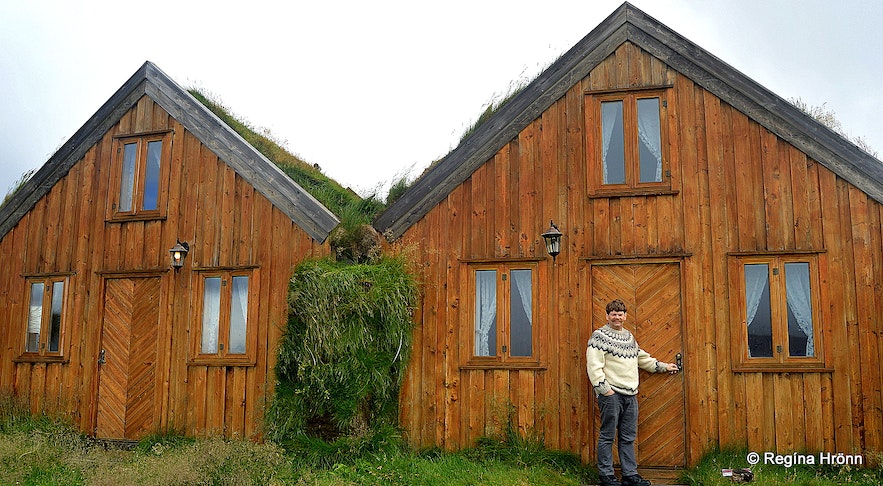 My husband by the turf houses of Fjalladýrð lodging

The view from Möðrudalur is unparalleled as you can both see far and wide with no trees to block the view. And the beautiful Queen of Icelandic Mountains, Mt. Herðubreið, can be seen from here.

It is such a lovely place and it is so nice to visit it after driving through the barren landscape of Öræfi - which literally means wilderness.

To reach this area you can rent a car in Reykjavík and drive around Iceland, either clockwise or anti-clockwise. The drive clock-wise is around 553 km from the capital city, with a lot of stops on the way, so allow for at least some 2-3 days or more to reach this destination. 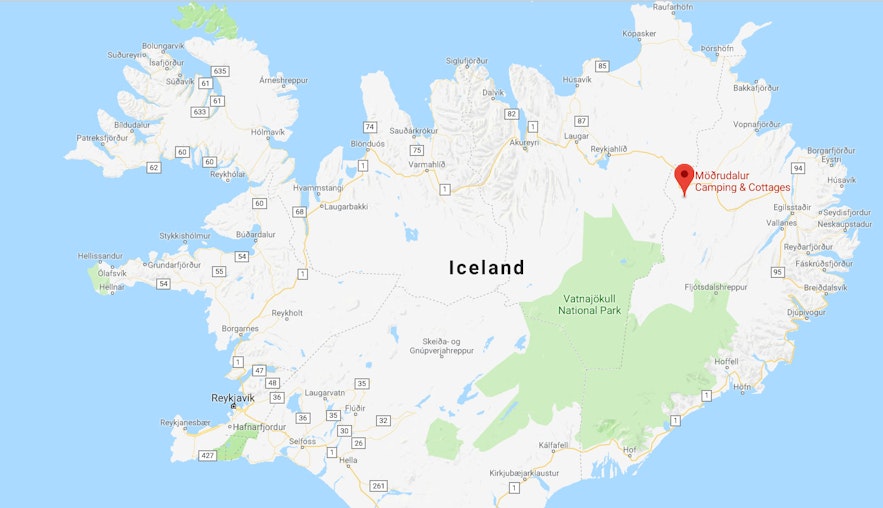 Möðrudalur is located in north-east Iceland, 95 km from the closest town Egilsstaðir, and 80 km away from the Mývatn area. From Egilsstaðir, drive on ring-road 1 for 62 km (of paved road) and turn left onto road 901 (Möðrudalsvegur), where you will drive another 30 km (on a gravel road).