A 275-meter high tuff mountain in South Iceland stands tall by ring-road 1. It is called Pétursey or Peter's Island. There are a couple of such mountains, which used to be islands, on the south coast.

Most people pass these mountains at 90 km/h on their travels in my country, which is a shame, so I am going to tell you about the elves and supernatural beings living in them - and other interesting facts and accounts about these mountains.

Top photo: Pétursey in the distance 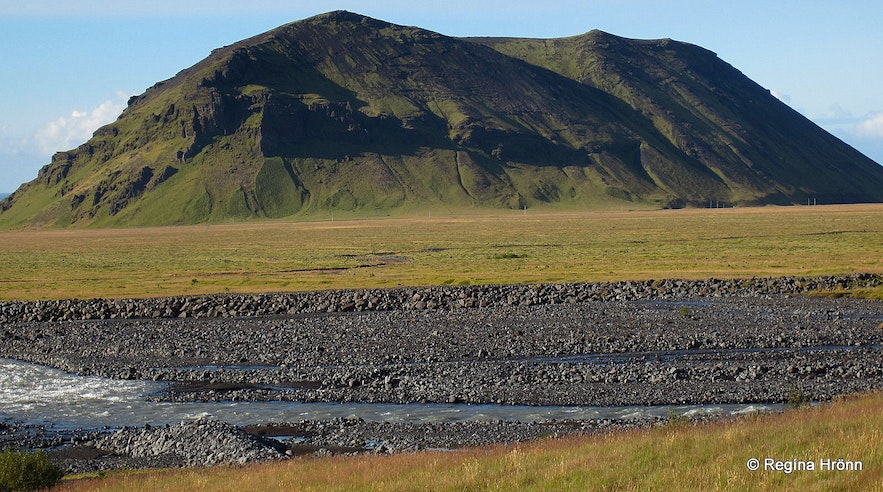 Pétursey was called Eyjan há or Tall Island in the olden days. Seeing that it is called an island, then the sea must have surrounded it earlier. It is said that on one side of Pétursey good elves live and on the other side bad elves live...

My husband and I have access to a small summer cottage in the vicinity of Pétursey, where we stay without electricity and heating like people used to do in the olden days. It is heaven on earth where one can totally relax in the vicinity of glaciers and mountains with a glacial river running next to the cottage. 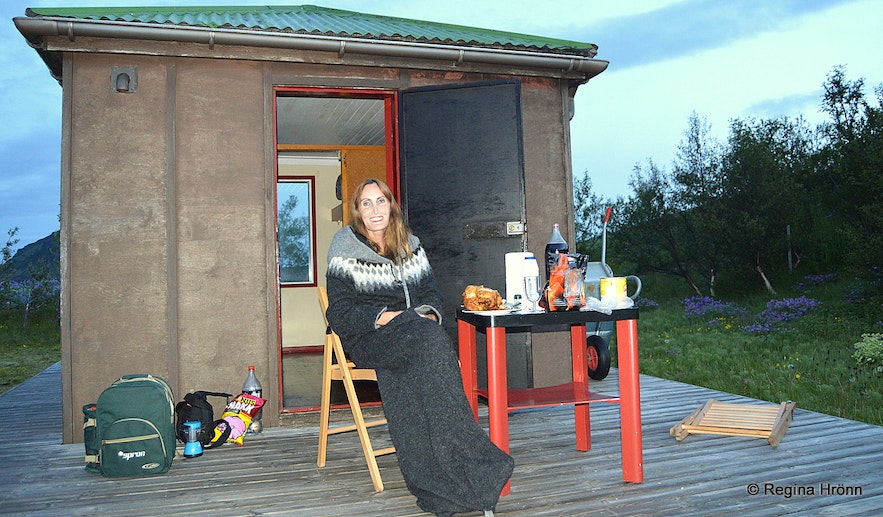 At night we have seen foxes behind the cottage. They are very scared of people and once a fox noticed me and jumped high in the air and I saw it almost flying away - from scary me ;)

I have a wonderful piece of clothing called the sweater blanket. It is an Icelandic design and it is perfect for keeping me warm while sitting outside during the bright, but chilly Icelandic summer nights. I even sleep in it inside my sleeping bag - the cottage has no heating and the sweater blanket keeps me warm at night as well. 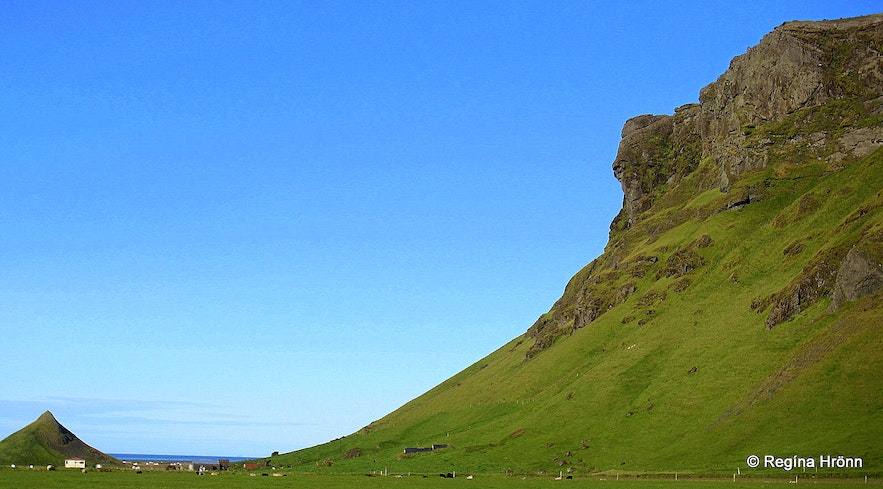 A peculiar mound stands out south of Pétursey - it is in the shape of a pyramid or a cone and its name is Eyjarhóll - Island Mound. This mound is covered in grass and is also the habitation of elves.

It is a volcanic plug made of basalt resulting from an underwater eruption. The sea, which is close by and must have been even closer in the olden days, has abraded the volcanic tuff from the mound.

These mountains were a good fortress, as it were, in the olden times when the Vikings were fighting each other. I have heard that in the Sturlungaöld Era (mid 13th century) some 200 Vikings used Pétursey as a fortress where they could defend themselves against their enemies.

Now, there are a couple of stories, which I found in Þjóðsögur Jóns Árnasonar - the Collection of Folklore of Jón Árnason, which took place at Pétursey. 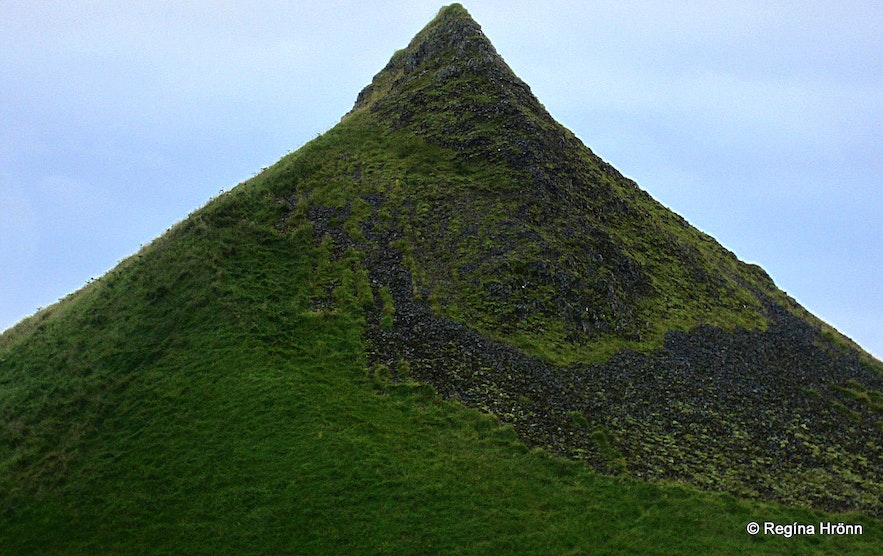 Once upon a time, two women were raking with a scythe in the middle moor in Pétursey,  a bit far west of the so-called Gvendarbakki. The weather was cold and raw and it was raining. One of the women wished she had hot porridge in front of her. After a long while, she saw hot thick porridge in front of them with 2 spoons.

The other woman was very grateful for this delivery and ate the porridge with a good appetite, but the woman, who had wished for the porridge, didn't dare to eat the porridge. After the other woman had eaten to her heart's content she cut off silver hooks from her bodice and put them in the trough.

As the trough was taken away the girl, who had wished for the porridge, but didn't eat it, was spoken to and she was told that she should not wish for anything anymore to make fun of others. From then on she became mute and the ridge is still called Mállausubakkar or the Mute Ridge.

Now, this must have been an elf, giving the women hot porridge to eat. 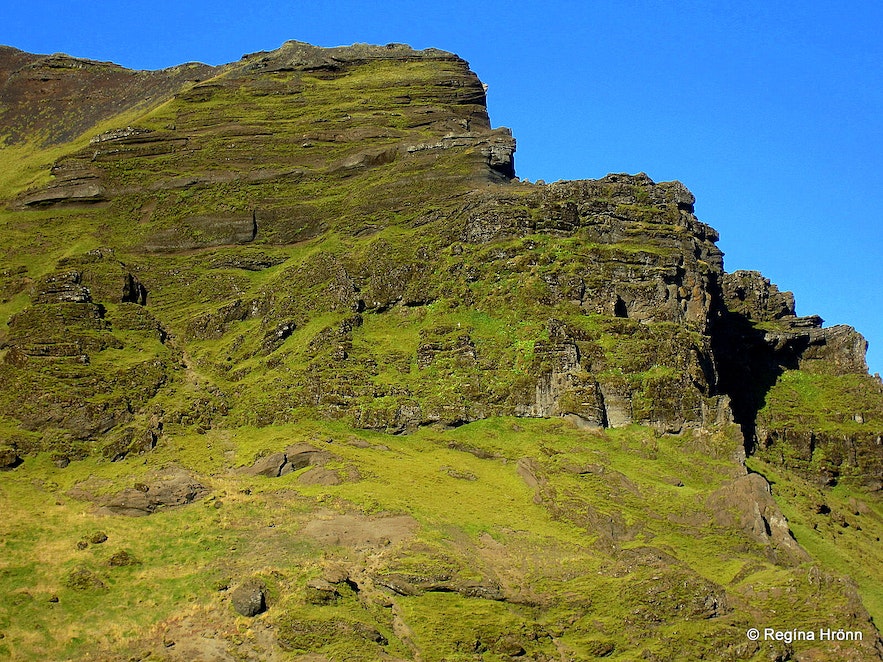 A few years ago the men, who remember an occurrence in Pétursey in Mýrdalur, passed away. There is a big rock in Pétursey, which people believe to be an elf-rock. Thus the farmers prohibited their children to go close to this rock, but one boy, the son of the farmer, didn't obey and used to play close to the rock.

One day the boy disappeared and people went searching for him, especially close to this rock.

Next winter the people were sitting in the cowshed and the farmer thought he saw his son enter the cowshed on two occasions that winter dressed in ragged clothes - and then the boy disappeared again. Next spring they found the skeleton of the boy by the rock. 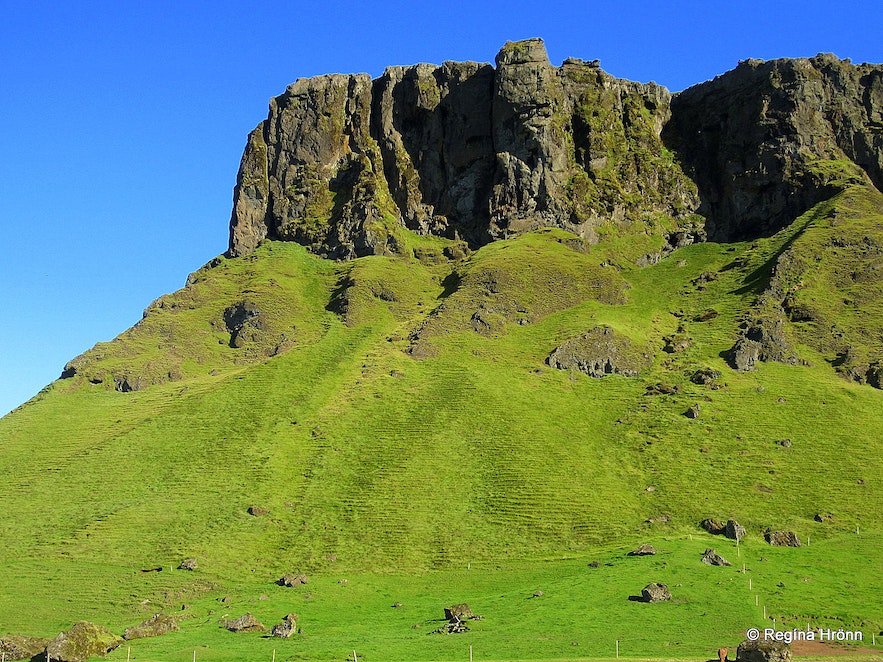 On the west side of Pétursey, there is a particular slope that reaches from the plain up to the edge of the mountain. It is said that in the olden days, many children were playing outside on a beautiful winter night - they slid downhill on ice in the slope. The children were happy and were playing loudly.

All of a sudden they heard as if somebody were shouting snappily: "Stop this!". They got startled and all of them, but two girls, stopped playing - the two girls walked high up on the slope and slid from there.

Again there was a shout as before: "Stop this!" but they didn't stop. Shortly afterward they heard the same shout. One of the two girls, named Þuríður, said that she was not going to stop and went to the rim of the mountain and slid down from there.

The story goes that Þuríður slid down the whole slope, but couldn't stop when she reached the plain, and the shoal ran with Þuríður all the way to the ocean, which was quite far away. Þuríður got lost there and the shoal got its name, Þuríðartorfa or the Shoal of Þuríður.

The elves do not want humans to be loud and disrespectful by their habitation and woe to those who do not listen! 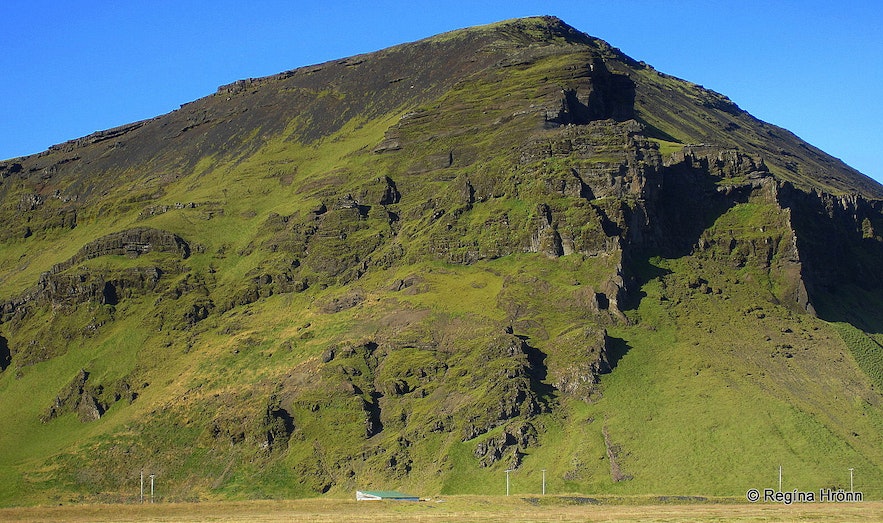 It has happened that teenagers have inexplicably wandered away from the farm in Pétursey and have sometimes been found again, but sometimes they have drowned in the Hafursá river. The river runs east of Pétursey and the pastures of the farmland are by the river.

This story happened in Pétursey when a woman, who is still alive (this is an old story - RHR) was a teenager; one night the women of Pétursey were cooking meat for Christmas dinner, as was their custom back then. The girl wanted to visit an elderly woman who used to give her a bite to eat. This elderly woman lived almost next door to the girl and they used the same footpath to their houses.

It was dark outside, but as the girl stood in front of the door where she wanted to enter, she saw a fairly tall guy approaching, and as he reached the girl she saw arms appearing from this phantom. The phantom grabbed the girl and threw her two or three times onto the pavement, much as when a bag is stomped. He then released the girl and disappeared, but the girl was not harmed. 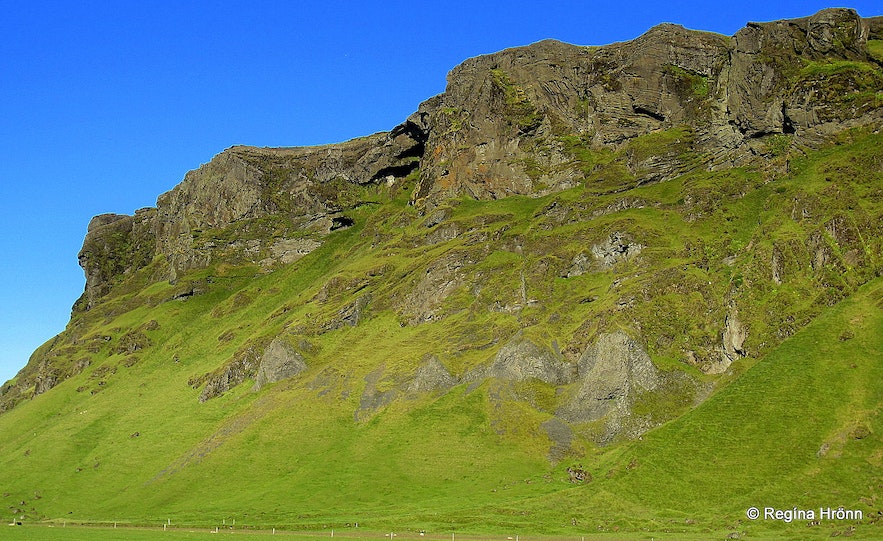 There are other accounts of encounters with elves and supernatural beings in Pétursey, one of which states that there are many elves in Pétursey and that there are both good and bad elves in the mountain. That story is called "Huldufólkið í Pétursey" or the Hidden People of Pétursey.

Huldufólk or the Hidden people are similar to the elves, they might even be the same, there might also be a slight difference, it is difficult to tell. In our folklore, they are called by both names "álfar" and "huldufólk"

For sure some strange things have happened in this area. 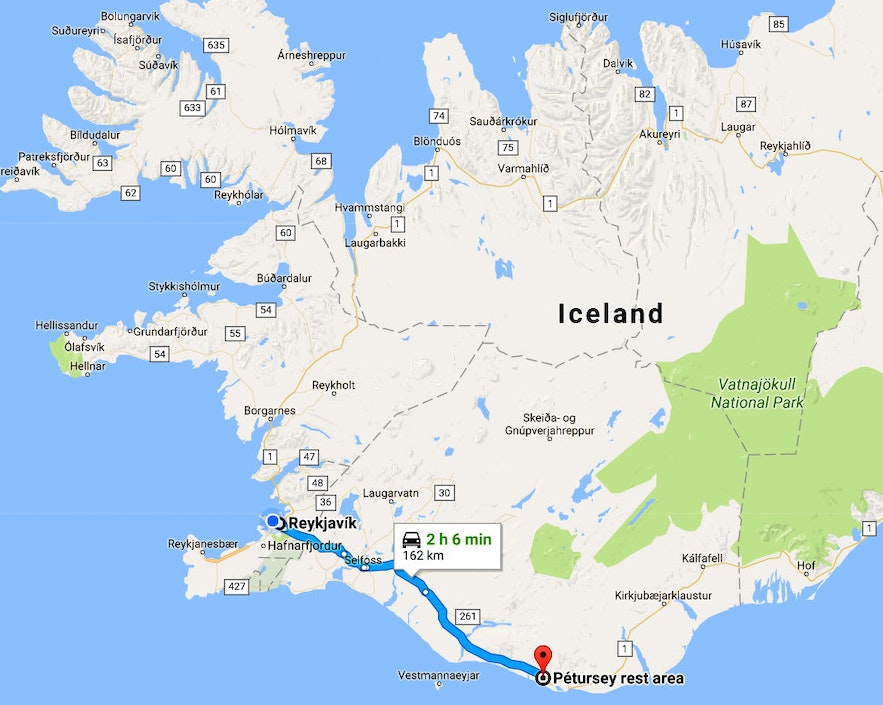 Pétursey is located by ring-road 1 east of Sólheimasandur and west of the town Vík on the south shore of South Iceland.

Other interesting stops in South Iceland:

Cape Dyrhólaey in South Iceland - the One with the big Arch.