We love shooting fireworks and you will notice that from around 8 pm we start slowly shooting some fireworks - then everything will be dead calm from 10:30 - 11:30 pm as the whole nation watches an Icelandic TV comic show Áramótaskaupið - "Skaupið" for short, which is an Icelandic satire on the events of the year. 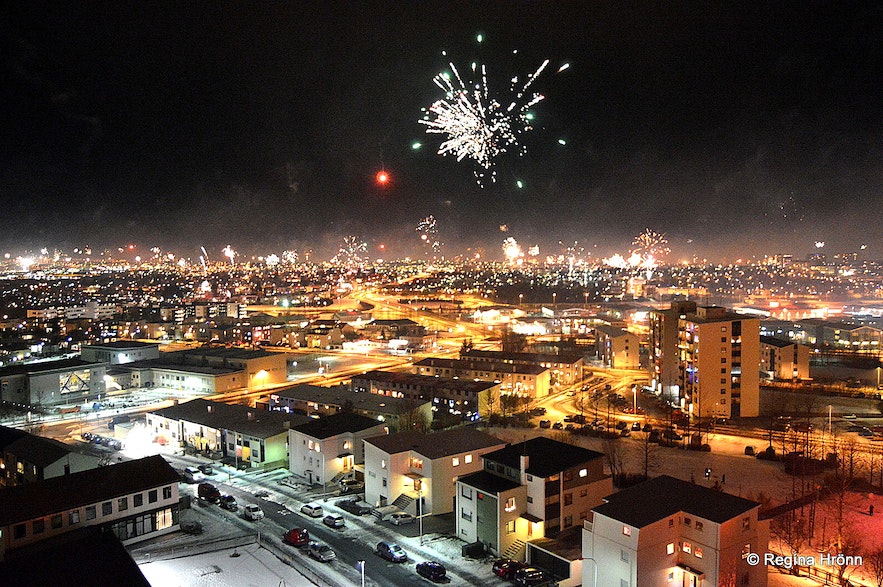 I have been getting a lot of questions from visitors where they can watch this show.  It is in Icelandic, but if you want to join us in watching Áramótaskaupið, then it is on channel 1 on our state-run TV station RÚV.  You can also see some of the shows on You Tube - Áramótaskaup.

Half an hour before midnight, when the TV show is over, the fireworks start for real and the nation goes crazy and the whole sky lights up. It is a breathtaking experience. 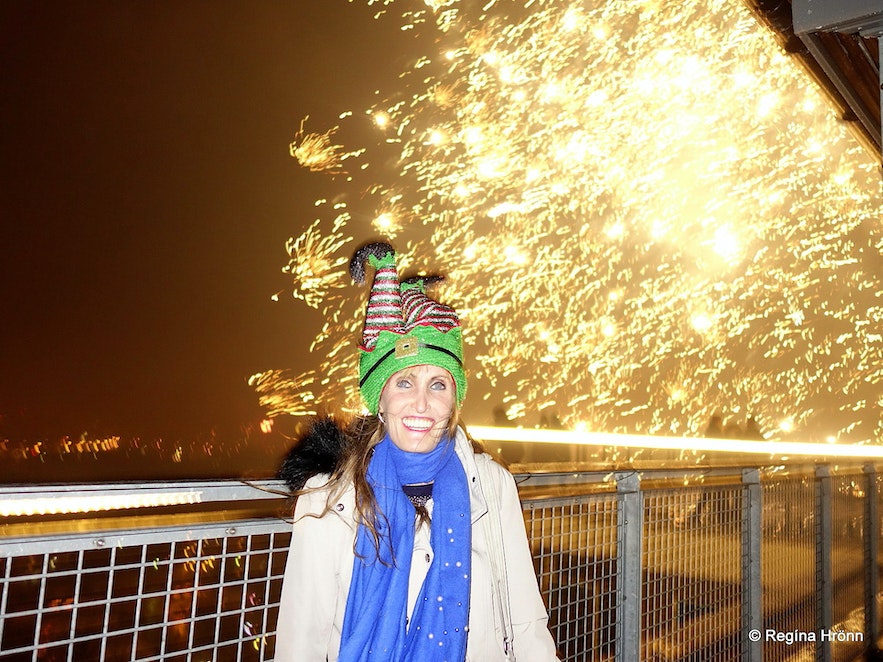 The fireworks are sold by the Search and Rescue teams for fundraising - this is their biggest fundraising and the nation is happy to help in such a manner.

A new source for fundraising by the Search and Rescue teams started as of New Year's Eve 2018 when people were offered to buy slips (græðlingur), which will be planted in Áramótaskógur - New Year's Eve Forest by Þorlákshöfn town.

Here in Iceland, everybody can shoot fireworks, so families and friends gather together and shoot fireworks and have fun.  If the weather is still there can be a lot of pollution so people with asthma are advised to stay inside.

I have asthma, still, I have not had problems with staying outside during this time, but I just wanted to warn those of you who suffer from asthma. 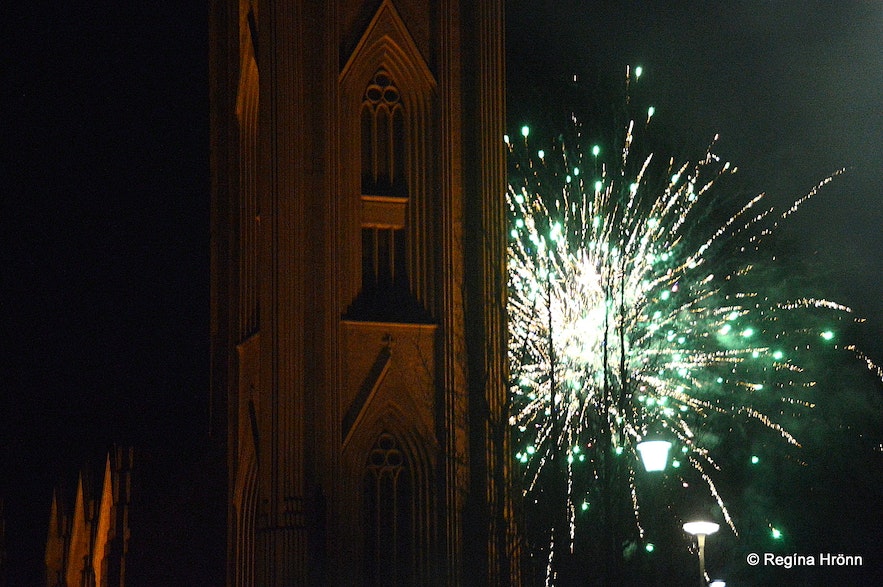 A good place to watch fireworks is from Öskjuhlíð hill - with Perlan - the Pearl on top. There you can see almost the whole of Reykjavík plus the neighbouring towns. I have often been there on New Year's Eve.

A very popular place for shooting and watching the fireworks downtown is by Hallgrímskirkja church on Skólavörðuholt hill in the centre of Reykjavík. There are also special areas for shooting fireworks at Klambratún park as well and by Landakotstún park. 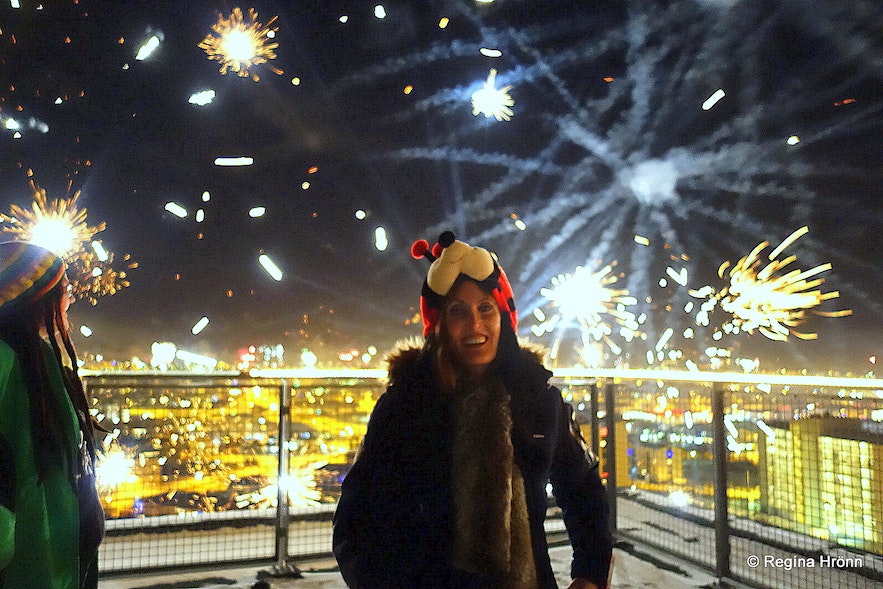 There is also another good place, a hill in Kópavogur town called Víghóll. I used to go there when I was young and single, and often I was there all alone with a breathtaking view of Reykjavík. Then buses filled with tourists started joining me ;)

New Year's Eve 2013-2022 I have celebrated on top of my mother-in-law's block of flats in Sólheimar street in Reykjavík.

It is 12 storeys high and the view from there must be one of the best views for firework watching in Reykjavík.

I am so high up there (Reykjavík standard) that fireworks explode in the sky next to my head, as you can see in my photo above!

I made a video of the view from up there: 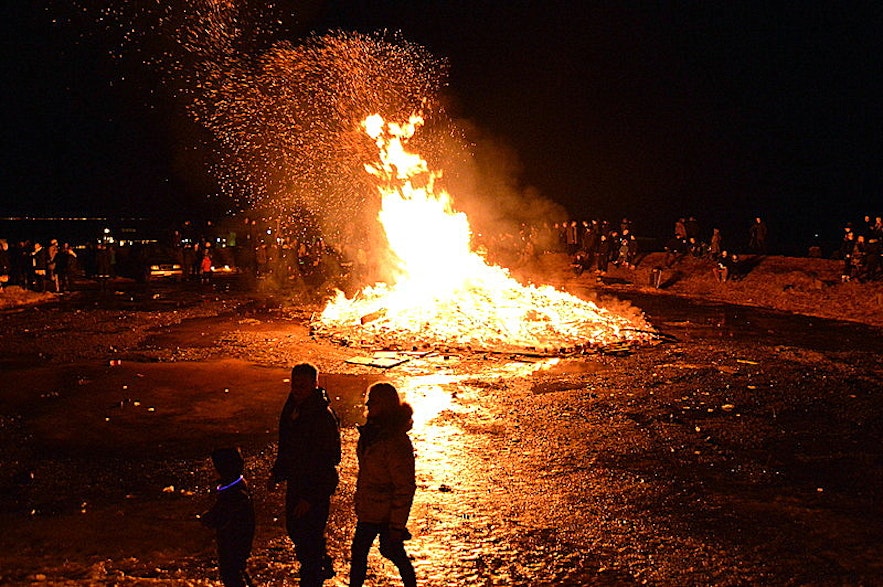 The bonfire in Seltjarnarnes

It is customary here in Reykjavík, and of course, the whole of Iceland, to visit the bonfires on New Year's Eve.

There are 10 bonfires all in all in Reykjavík and more in the Great-Reykjavík area, but around the country, there are no less than 90 bonfires. Most of them are lit at 8:30 pm and last until around 10:30 pm. That is when we have to go home and watch Áramótaskaupið :)

I always visit the same bonfires, and even when I lived in the suburb where we had our own bonfire, I went downtown to Ægisíða street in the west part of Reykjavík and visited the bonfire there as I love this part of my city, where I lived for 3 years as a child. 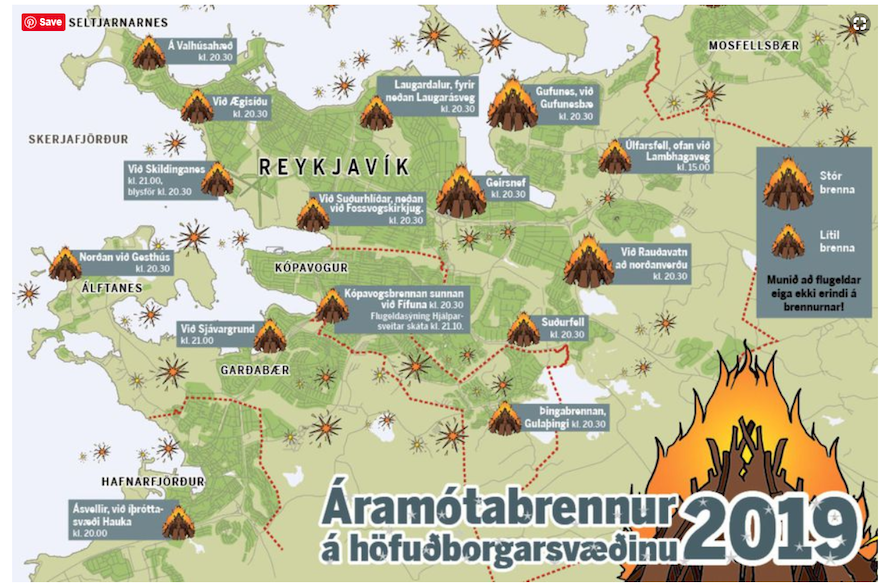 Then I visit the Seltjarnarnes bonfire, which is a town adjacent to Reykjavík. Here you have live music and an excellent view from the Valhúsahæð hill. Very close to that bonfire Seltjarnarneskirkja church is located.

I shot a video of one of the bonfires I visited on New Year's Eve:

We sometimes try to catch the firework show at 21:30 at Smárahvammsvöllur in Kópavogur, and then drive around to see how many bonfires we can spot.

I love this tradition, feeling the heat of the bonfires and shooting firecrackers. There are always big crowds of people by the bonfires and a lovely atmosphere. There is singing and organised fireworks displays by our rescue teams.

The only bad thing is the flares which people light at the bonfires and cause a lot of smoke. People suffering from asthma should take this into consideration before going to the bonfires or try not to be too close to the bonfires. 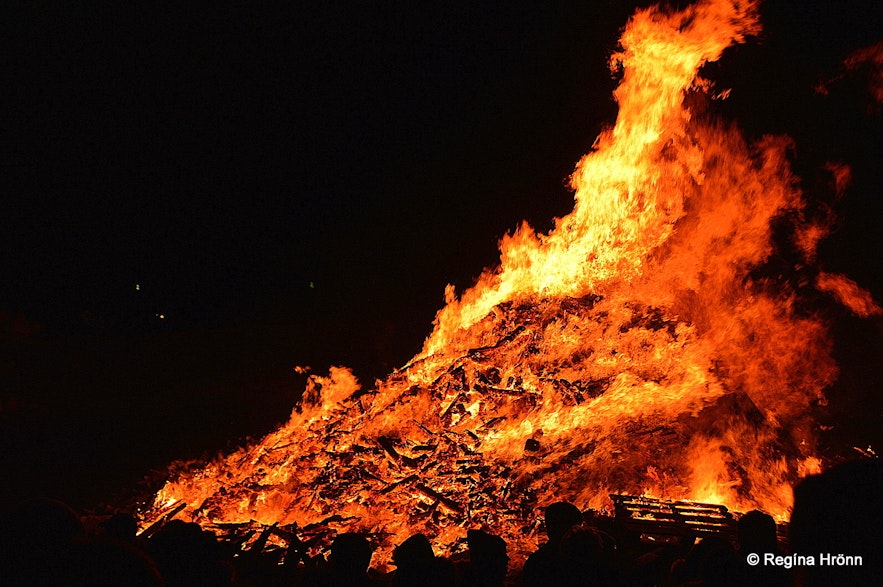 A bonfire in Reykjavík on New Year's Eve

I had my picture in one of our newspapers last year in a news article on tourists flocking to the bonfires on New Year's Eve 2015-2016. One of the photos is of me and my husband, they obviously thought we were tourists ;)

My husband has a hat collection of more than 500 hats and on New Year's Eve his whole family puts on silly hats. If you look at our photo in the news article then the photographer took the photo at the exact moment my father-in-law was taking the photo below :) 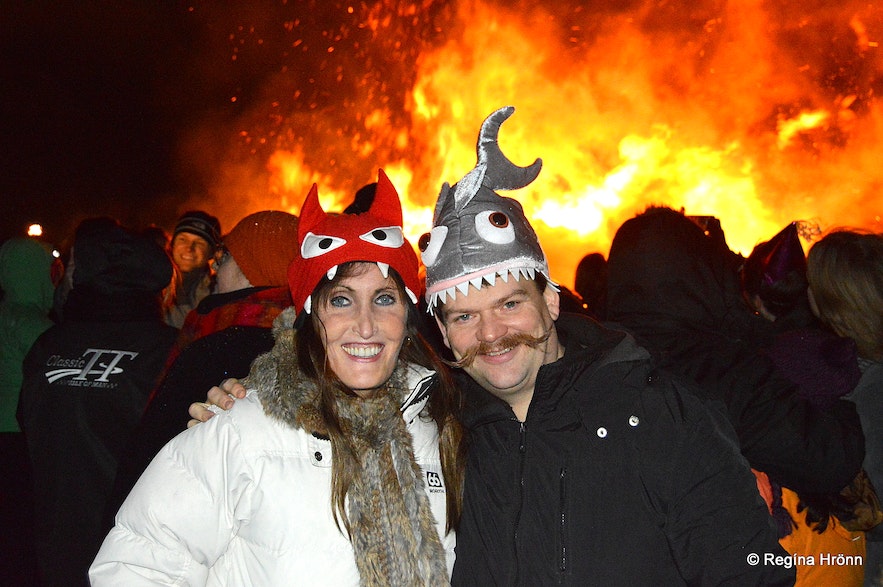 After the fireworks start fading out at around 1 am the younger generation starts flocking to the discos. Very few restaurants used to stay open in Reykjavík on New Year's Eve and that caused a problem for tourists, who wanted to dine out on that evening. This is a family celebration and everybody is busy shooting fireworks and wants to be with their families.

As more and more tourists are visiting us at this time of year the demand for restaurants being open is greater, so more restaurants stay open now. 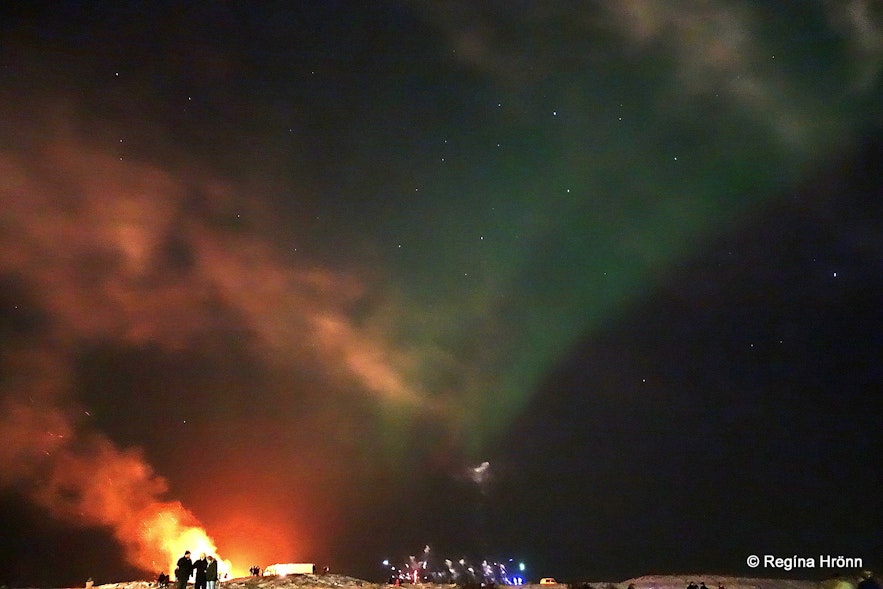 The bonfire and Northern Lights in Seltjarnarnes

Do join us in our celebration - there are several guided tours to choose from and this is the night to be shown around by a local, as we know where to go and what to do :)

I would also recommend checking out the  ice caves which are only open in wintertime. And don't miss out on visiting Jökulsárlón glacial lagoon and our Diamond Beach.

There is a myriad of things to do in Iceland in wintertime - have fun in my country and do remember that saying Happy New Year is "Gleðilegt nýtt ár" in Icelandic :)

I have written another travel-blog about New Year's Eve customs in the olden times: