Deep-rooted in the Icelandic national spirit is the old belief in the elves and the hidden people of Iceland. I have written several travel-blogs over the years, in which I have shown you many different elf-locations all over Iceland.

We also have many customs related to the elves, most of which are not practiced any longer. In this travel-blog, I translated a couple of well-known Icelandic folklore into English to show you some of the elf customs related to Christmas and New Year's Eve. 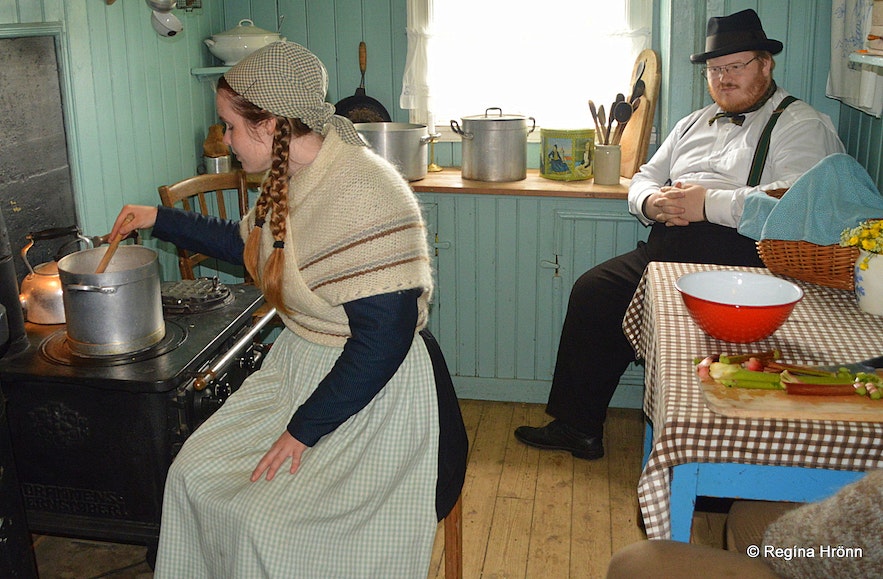 The elves seem to have celebrated Christmas, and there are stories of the elf-habitations being all lit up with light - and the elves danced and were merry at Christmas. And they sometimes visited the turf farms of humans and danced the night away.

The folklore, Systurnar og Álfafólkið - the Sisters and the Elves, written in Þjóðsögur Jóns Árnasonar - the Collection of Folklore by Jón Árnason, which I so often refer to in my travel-blog, goes like this:

"Once upon a time, two grown sisters lived with their parents; one of them they treated as an oddball and left her out. On New Year's Eve, all the people on the farm were on their way to evening prayer at church, and the one sister who was always left out wanted to join them to church. 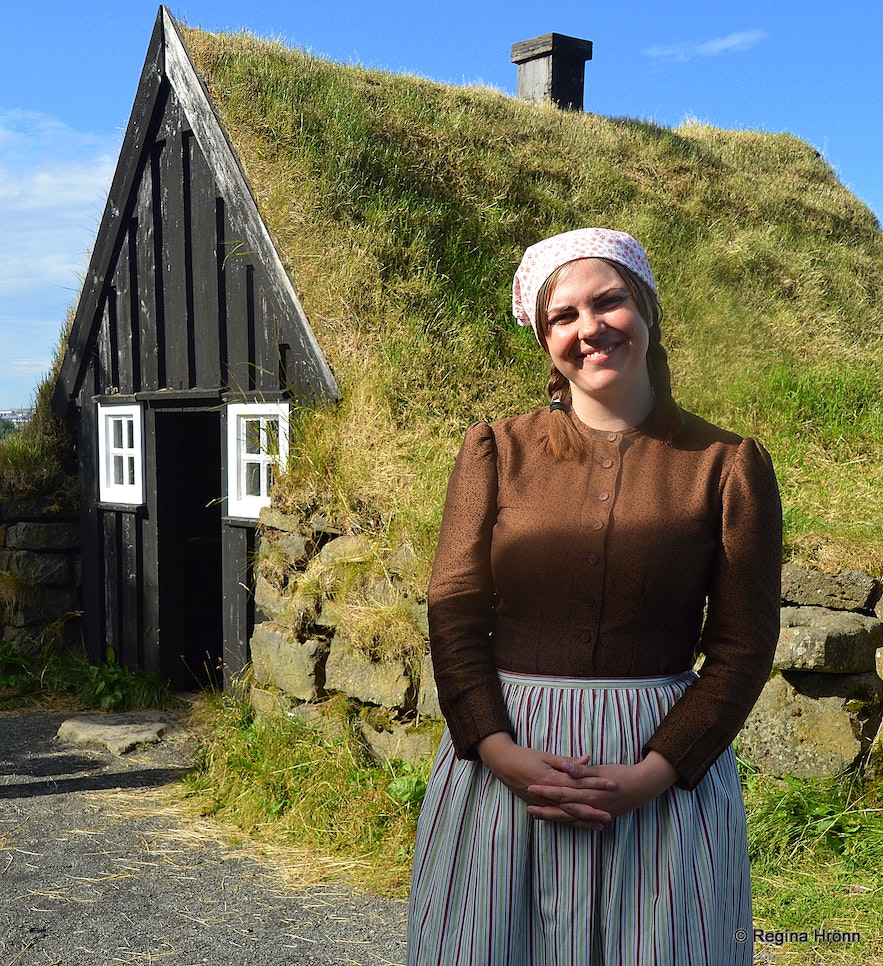 A turf house at Árbæjarsafn Museum in Reykjavík

But as somebody had to stay behind, she was ordered to stay put even though she was against it. And as everybody had left the turf farm she started cleaning the farm thoroughly and lit up the whole farm.

As she had finished she invited the elves and the hidden people into the farm the way it was customary back then. 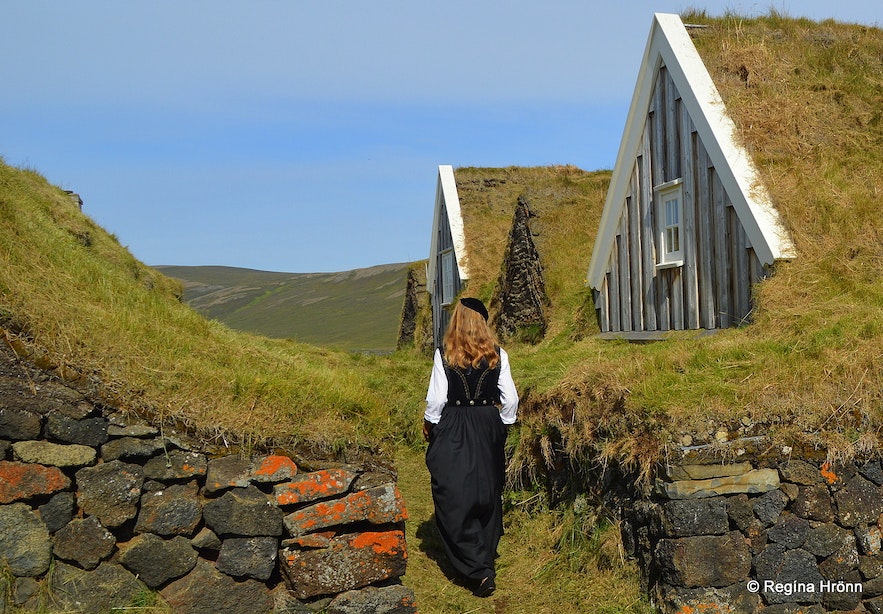 She walked around the farm and uttered this customary prologue: 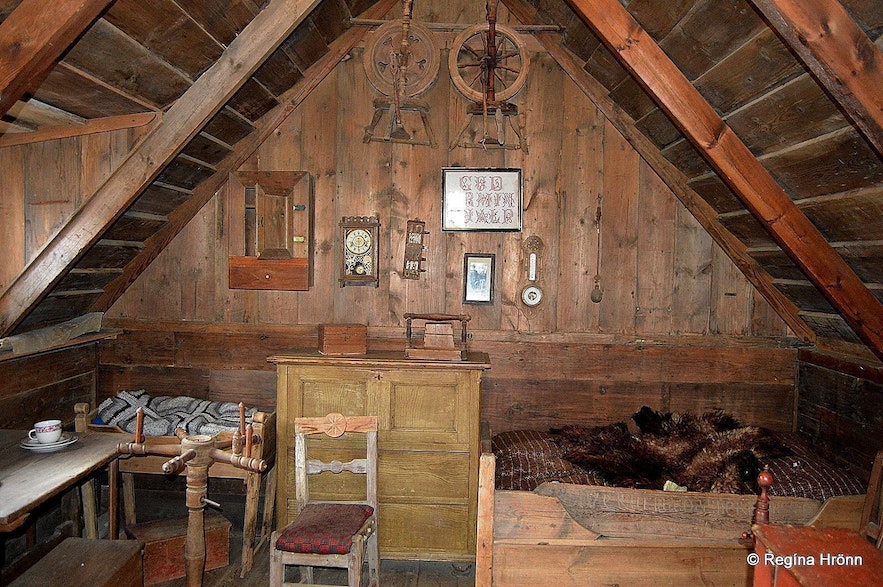 Inside a turf house at Skógar Museum in South-Iceland

She then walked to the communal loft and started reading the scriptures, and didn't look up until dawn. As soon as she had sat down a myriad of elves entered the farm; they were all beautifully dressed in gold and trappings.

The elves arranged all kinds of jewels and treasures on the floor and offered them to the farmer's daughter.

The elves then started dancing and asked her to join them. She didn't tend to them, and the elves carried on this way until dawn. 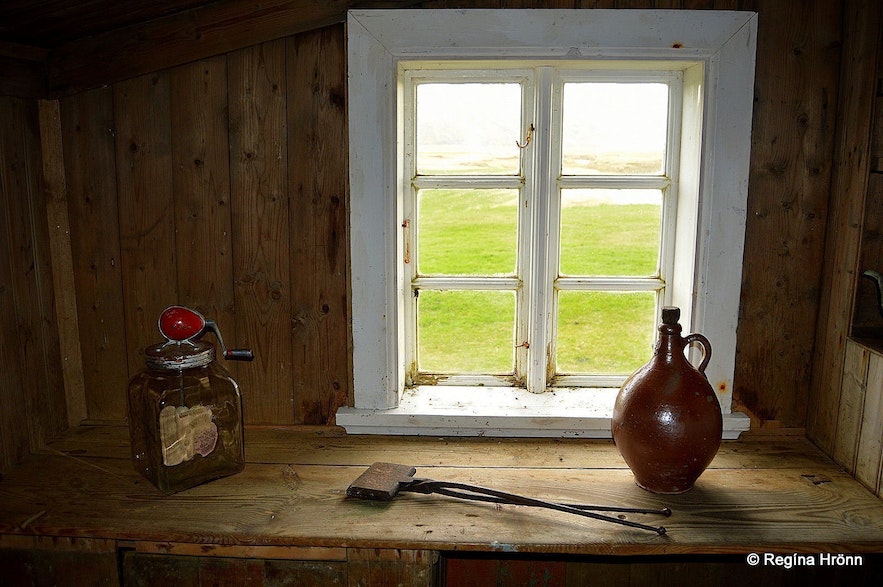 But as morning broke the farmer's daughter looked out of the window and said: "Thank God, the day has come". As soon as the elves heard the name of God they ran out of the farm and left all their treasures behind.

When the people of the farm returned back home and the sister of the farmer's daughter saw the treasures her sister had acquired, she felt jealous. She ordered that her sister should not stay at home the following year, but she would stay home instead. 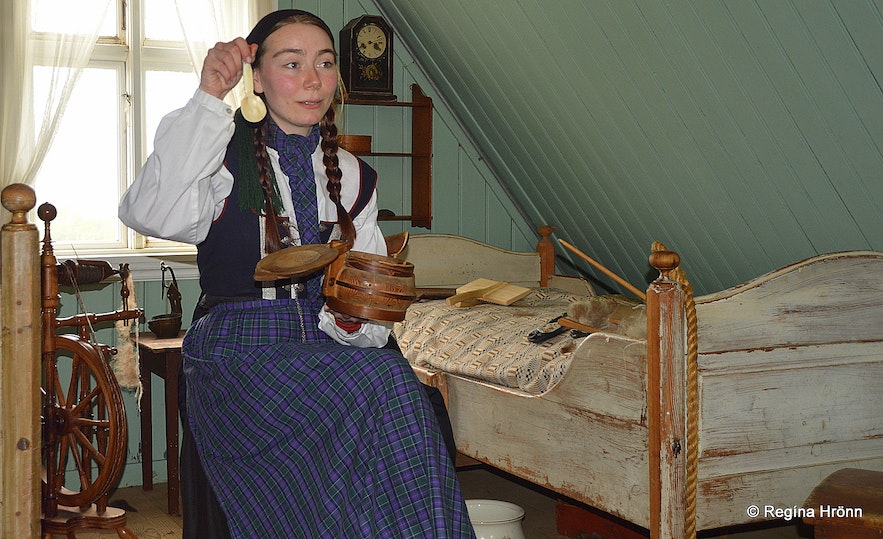 The following New Year's Eve the favourite daughter stayed behind while the others went to church. She was very much looking forward to the arrival of the elves; she invited them in and lit the farm.

The elves arrived as beautifully dressed as before and piled up their treasures on the floor, they then started dancing and invited the girl to dance - she accepted! But as fate has it the girl broke her thigh while dancing and lost her mind!

And the elves took all their treasures with them." 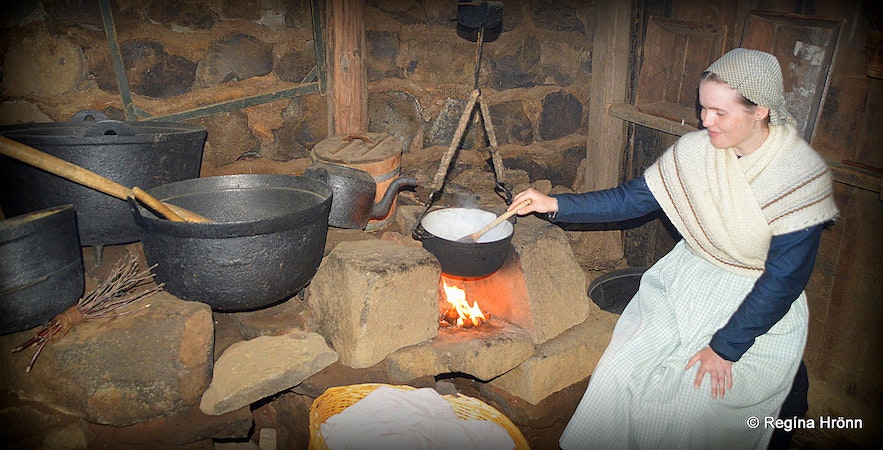 One such folklore from Þjóðsögur Jóns Árnasonar - the Collection of Folklore by Jón Árnason called Jólanóttin - Christmas Eve, tells us about several girls who had lost their mind on Christmas Eve while staying alone at home while the others attended the evening service. Thus nobody wanted to stay behind anymore. 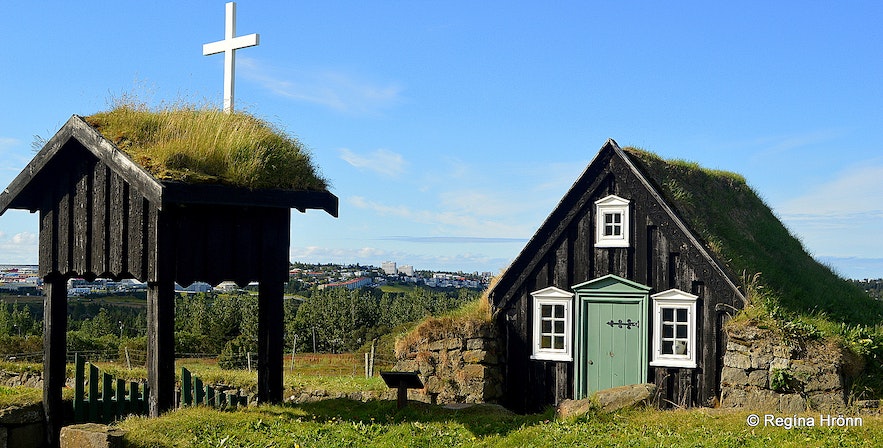 A new farmhand was hired on the farm and the following Christmas Eve she was left behind attending to the farm while the others attended the evening service. She was unaware of the fact that she might be following in the footsteps of all the other girls who had gone mad the previous Christmases.

She followed the necessary customs as did the sisters on New Year's Eve in the previous folklore; she lit the lights and distributed them around the farm, so the whole farm was lit up. She then sat on her bed and started reading. She was both well-read and religious.

Many elves entered the farm; men, women, and children. They started dancing and asked the girl to dance with them. But she sat quietly and was silent. 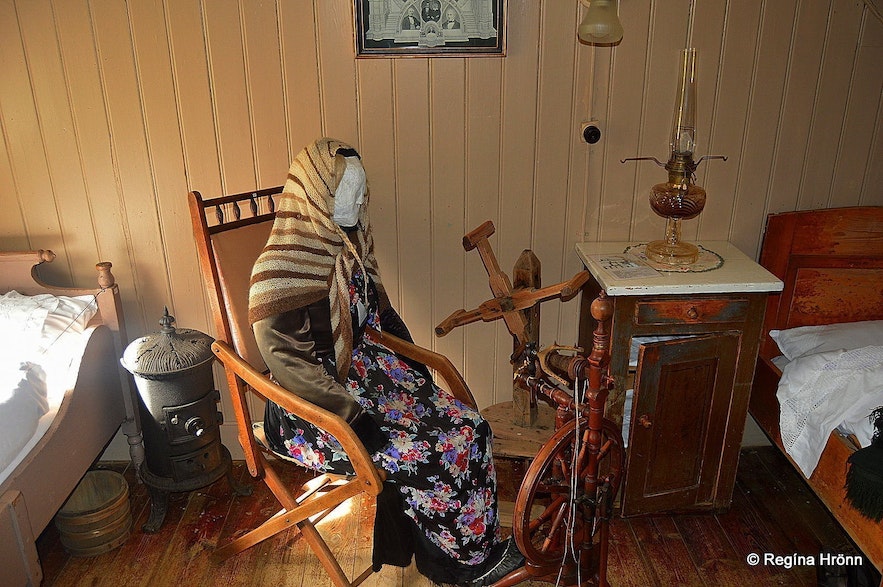 The elves continued asking her to dance with them offering her lavish presents if she were to accept, but she preserved. It continued this way until dawn when the elves left the farm. The farm people returned back home and expected to find a mad girl at home as had been the case with the other girls.

They were eager to know what, if anything, had happened and she told them about the house party and that she had known that bad things would happen were she to partake in the dancing. From then on she was always asked to guard the farm on Christmas Eve. 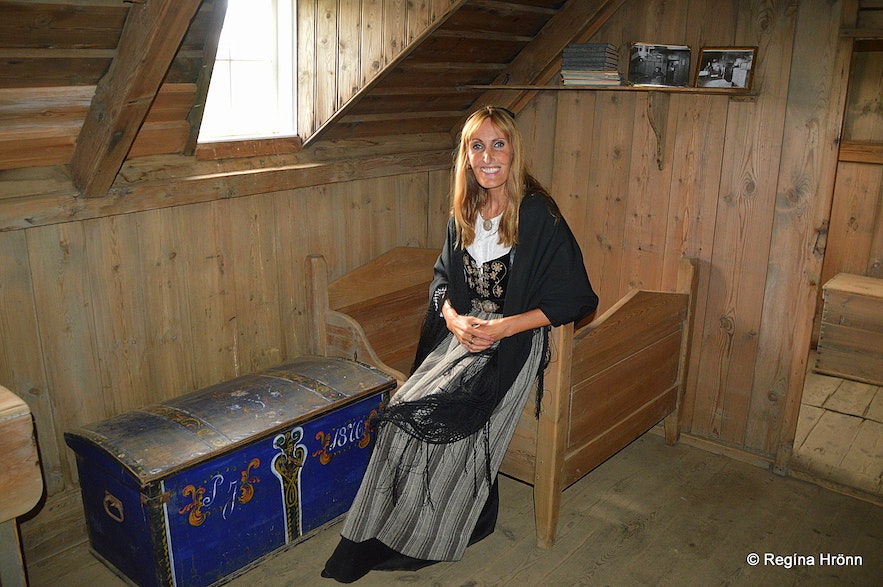 You see the similarities between these two stories. It is not mentioned where they took place, but I gather that this knowledge of the ways of the elves during Christmas and on New Year's Eve was that widespread that it was practiced in many places around Iceland.

It was customary for the housewife or another female inhabitant of the turf farm to sweep the whole farm on both Christmas Eve and on New Year's Eve, as the women did in these stories, and to put up lights in every corner of the farm. This was done to welcome the elves who were either moving or were out and about. 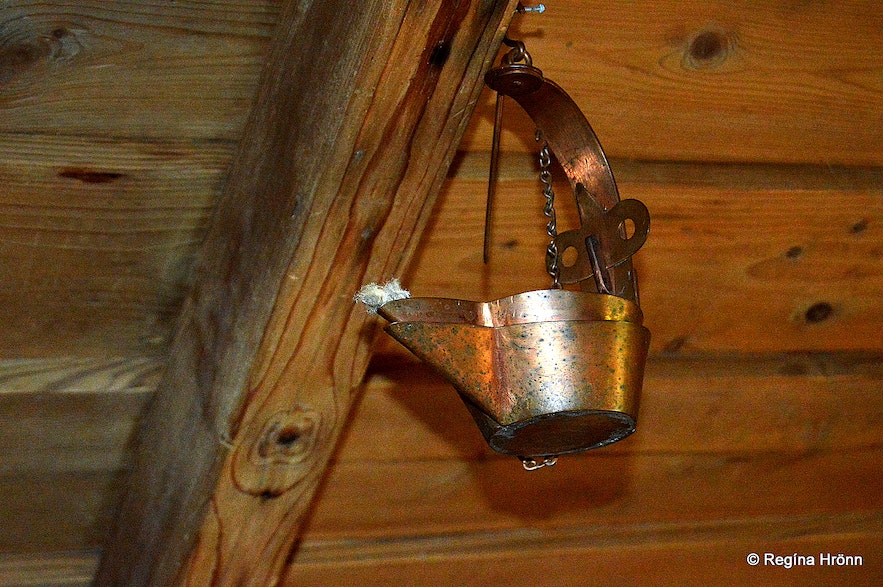 They then walked around the farm (up to 3 times) and invited the elves into their home with the prologue in the first story. I gather that most Icelanders know these words by heart. Sometimes these women left food and wine on the table for the elves.

This they seem to have done both on Christmas Eve and on New Year's Eve. And care was taken that the light in the lamps did not go out, but was lit until dawn the next day. Take into account that during that time of year, the daylight hours in Iceland are very limited.

Misfortune always seemed to happen were the mere humans to accept the offers of the elves on both these days, and those unfortunate enough to accept something from the elves went mad.

Other stories tell us about people who were at crossroads on New Year's Eve. The elves would flock towards these people and ask them to join them. They would offer great treasures, clothes, food, and wine.

They would even take on the disguise of your mother or sister and ask you to join them!

If people were to answer or accept they would become spellbound. But if they were to preserve until dawn when the elves left the treasures would become theirs.

In my travel-blog Úlfhildur the Elf-lady at Lake Mývatn in North-Iceland - Icelandic Folklore I translated another folklore from the Compilation of Folklore by Jón Árnason. It tells the story of the elf-queen Úlfhildur, who had quarreled with an old lady who put a spell on her.

The spell was that Úlfhildur would always have to be with us humans until a human man would succeed in following her to the realm of the elves on Christmas Eve.

And this would have to happen on the first, second, or third Christmas Eve after the old woman had put the spell on Úlfhildur. The only good thing the old lady had added to the spell was to allow Úlfhildur to meet her husband for three Christmases. Find out more about what happens in that travel-blog :)

In another travel-blog, which I wrote many years ago, I tell you the story of two brothers and what happened to them on New Year's Eve. This folklore took place at Tungustapi in Sælingsdalur - the Church of the Elves in West-Iceland and tells you about the revenge of the elves after one of the brothers had disturbed the peace of their church.

I show you in my photo above a replica of a turf church, but we often refer to these replicas as elf-churches. The churches of the elves look quite different from the one in the photo though; they are usually a beautiful big rock.

If you check out the folklore at Tungustapi you will see one of their churches, but there are many such elf-churches in Iceland - f.ex. the Elf-church Álfakirkja at Laugarvatnsvellir plains. 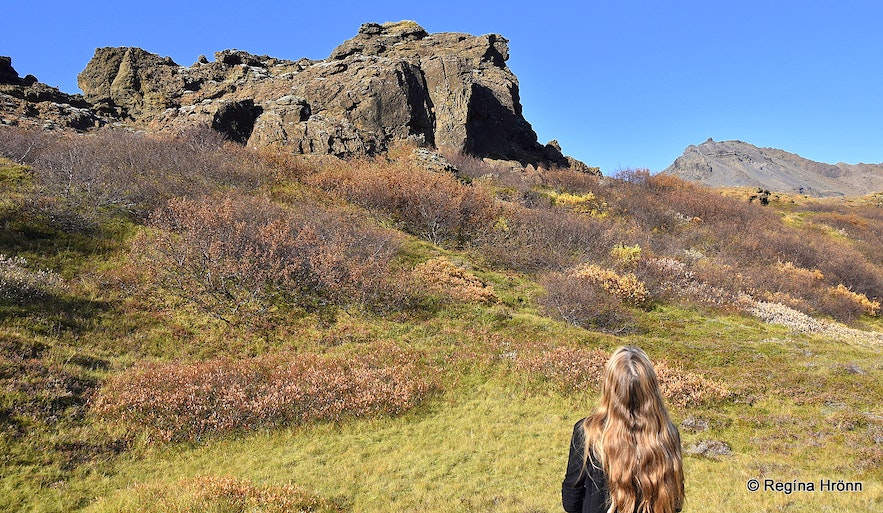 Nowadays we don't follow these elf-related customs at Christmas and on New Year's Eve, well apart from when I get afraid of the dark then I say the same words as the farmer's daughters in the folklore above. 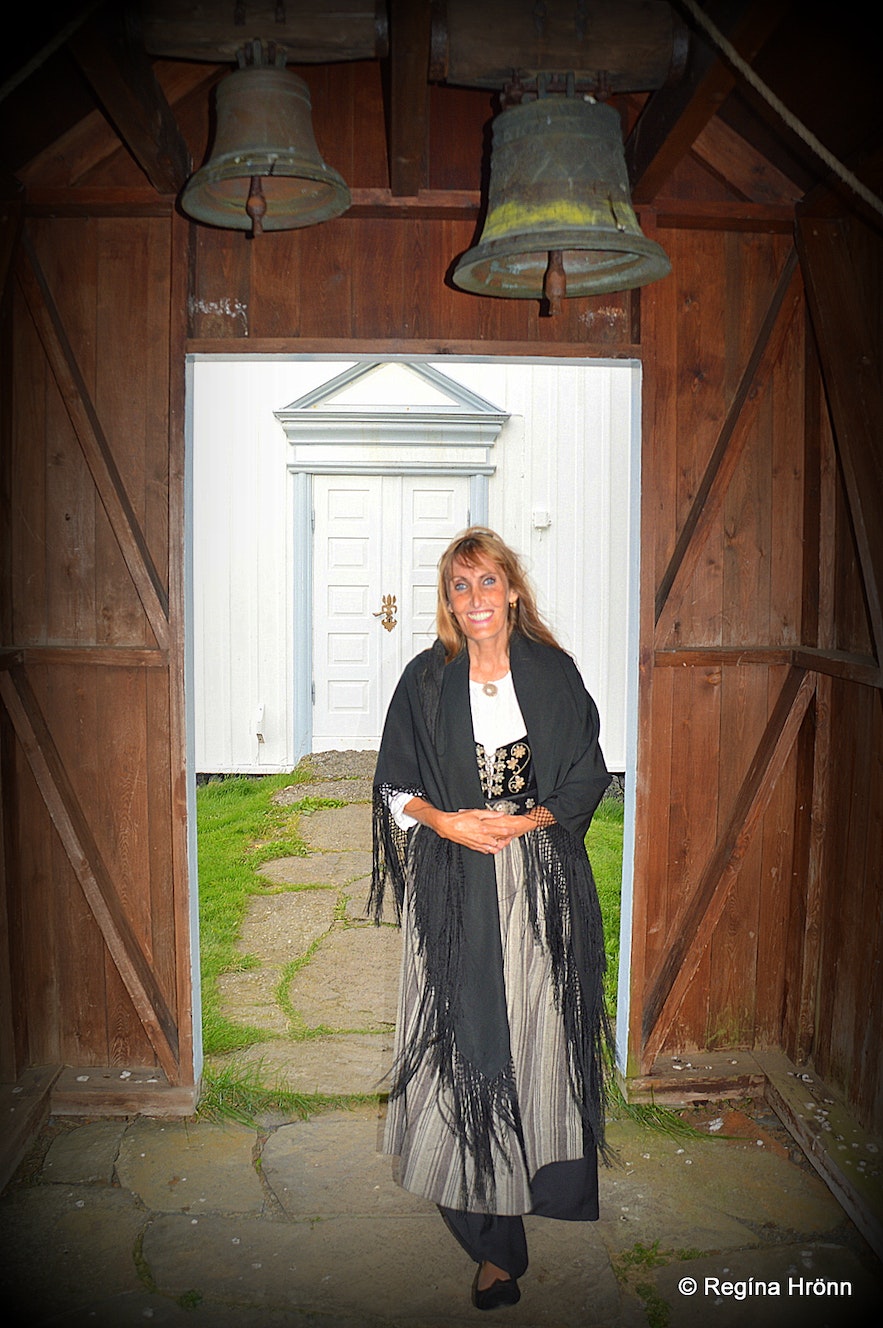 I love these stories and as I told you earlier then they are deep-rooted in the soul of us Icelanders, at least the older generations. I hope you have enjoyed reading about the elves and the customs related to them.

If you want to know where all the turf-houses in my photos are then I have written a travel-blog A List of the beautiful Icelandic Turf Houses, which I have visited on my Travels in Iceland.

To see how we celebrate NewYear's Eve in Iceland nowadays I refer you to my blog: Celebrating New Year's Eve in Reykjavík, the Capital City of Iceland.

Have a lovely visit to Iceland :)