Öndverðarnes cape is the westernmost point of the Snæfellsnes peninsula in West Iceland. I have visited Öndverðarnes several times over the years and it amazes me how many ruins can be found here. This blog is a side-blog of my 5-part travel-blog series about the interesting Snæfellsnes Peninsula.

What you will first notice as you enter this area is the small orange lighthouse, Öndverðarnesviti, built in 1973, with a couple of parking spaces next to it. 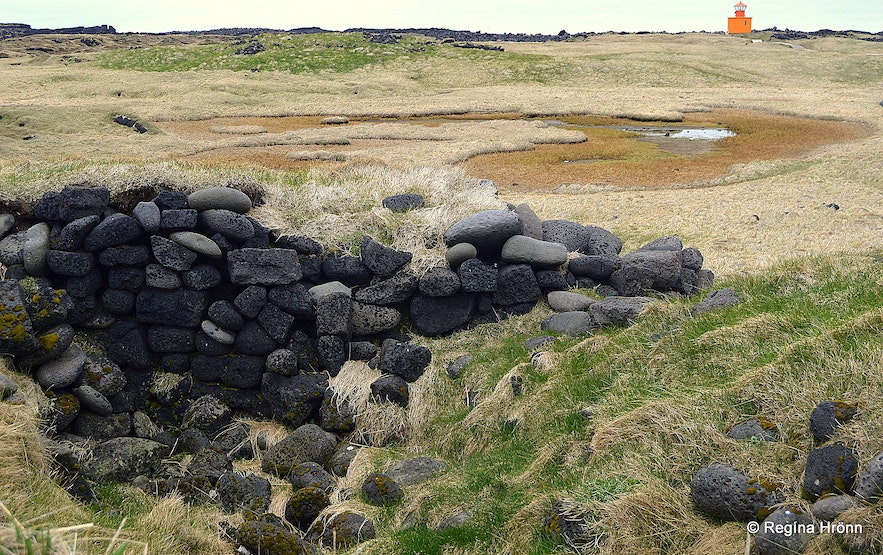 In 2007 a coach driver, driving 40 tourists around, lost control of the coach and seesawed on the edge of the rocks. Nobody got hurt, but it must have been a scary experience.

​Öndverðarnes used to be a vibrant fishing station back in the olden times with fishery and a lot of fisherman's huts. Here was also a farm and a chapel, which is long gone now. 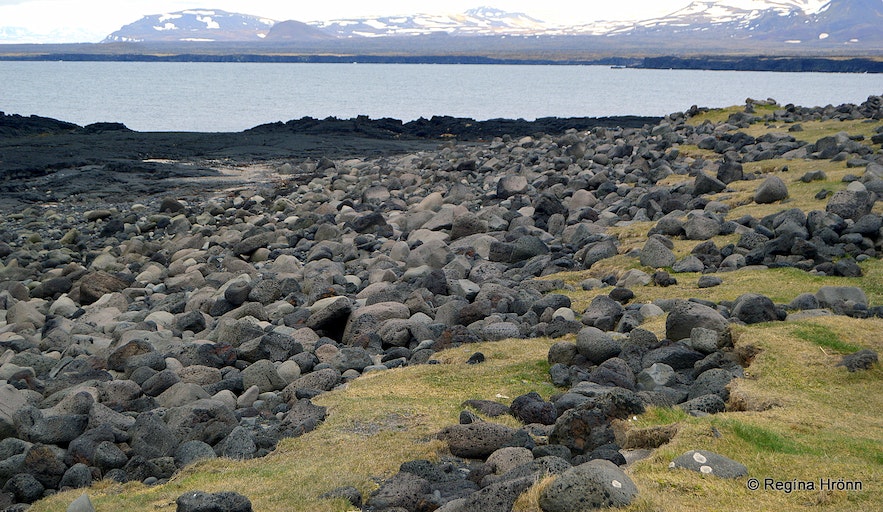 Since 1945 Öndverðarnes has been deserted, but you can see the ruins of the huts all over when you walk behind the lighthouse.

You will see ruins of fishermen's huts, fish storage huts as well as farm ruins.

​I walked around this area thinking about how vibrant it must have been back then, now everything is quiet, all the stories, conversations, laughter, and tears from at least the 13th century until the 20th century - all gone. 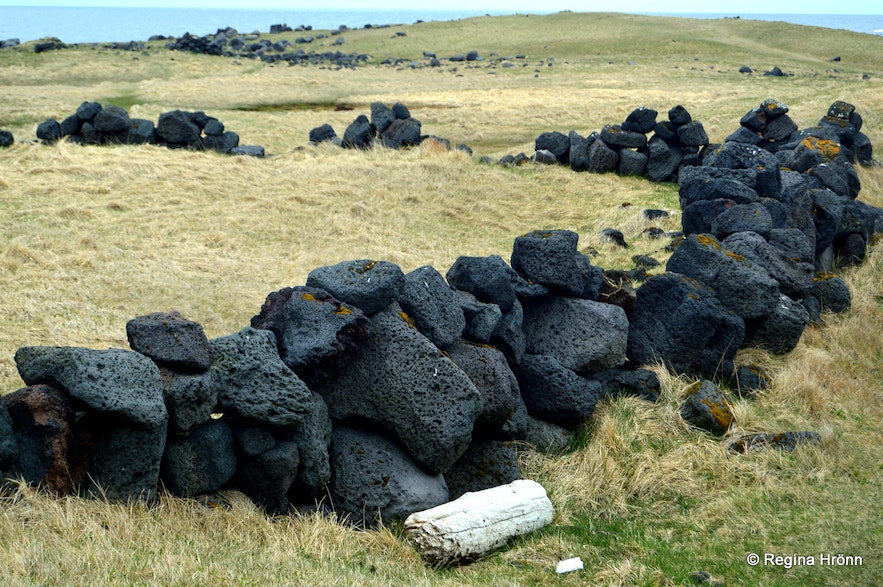 I can get quite sentimental when I visit such areas. And looking out at sea and exploring the rocky lava shoreline makes me marvel at how strong and healthy these fishermen must have been!

​In one spot you will encounter a skillfully made ancient stone well called Fálki or the Gyrfalcon.

It was the only water supply on the Öndverðarnes peninsula.

According to legend, there are three water holes in the well, one with freshwater, another one with healthy holy water, and the third one provides ale.

I have also read that instead of the holy water one of the 3 wells provided brine. 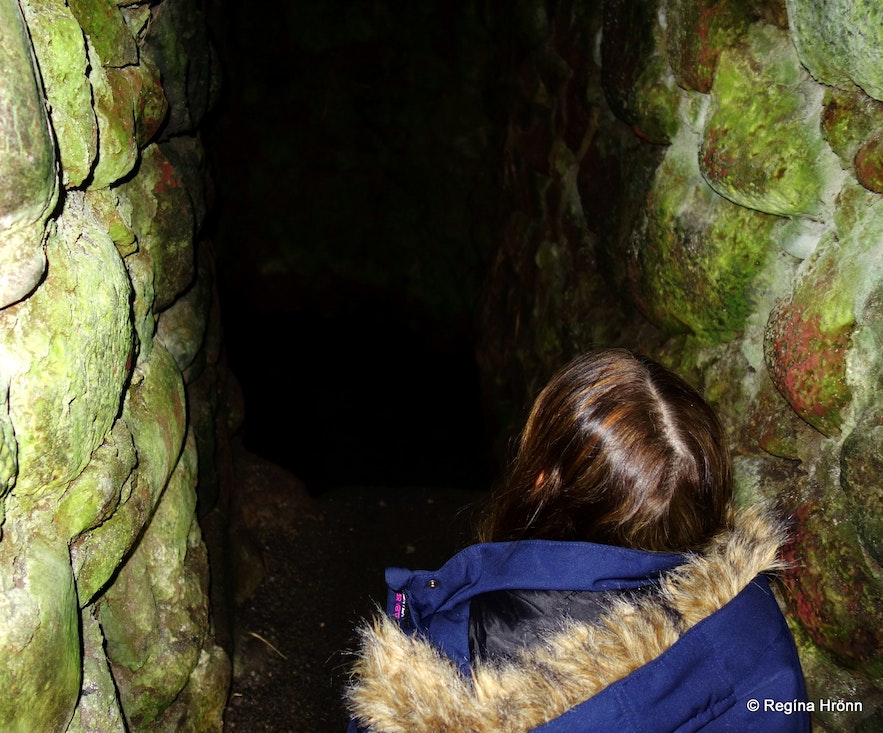 We don't know the origins of this well or who built it, but it is obviously old so it is now declared protected.

I have heard that it was thought to bring back luck to fetch water from Fálki after the sun had set, so wanting to use this well in wintertime during the shortest days would have been a challenge.

The yellow sign to the left of the well with the letter R and "friðlýstar fornleifar" written on it means that the well is protected. 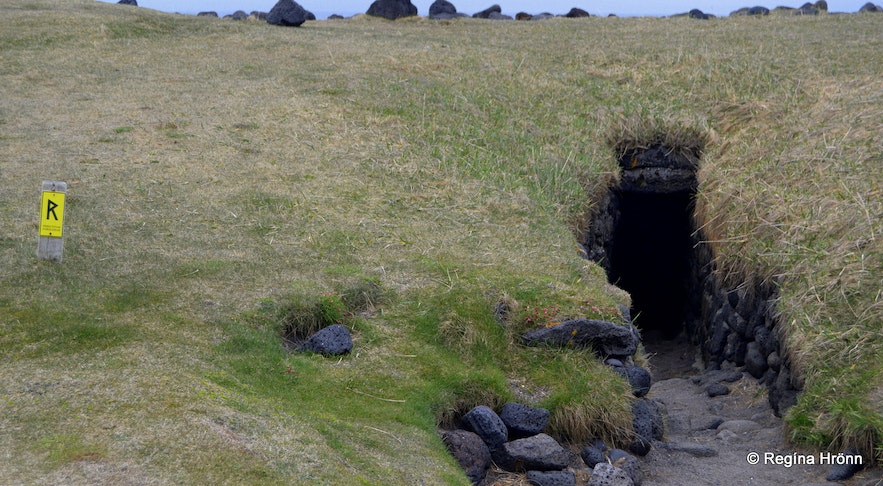 When you walk by the shoreline of Öndverðarnes, or should I say above it as it is so rocky, it is hard to believe that this was the landing for many a small rowing boat  Both the inhabitants and other fishermen would row from this landing.

When the rowing boats came ashore with their catch they had to be careful so as to not scratch their boats against the rocks on the beach. The fishermen would drag their boats up the shore, high enough for the sea not being able to reach them.

Marks can be seen in the stones from the keels of the boats. What a hard task this must have been. Above the landing, a sign has been put up explaining how this was done. I always appreciate such signs and would like to see them in more areas. 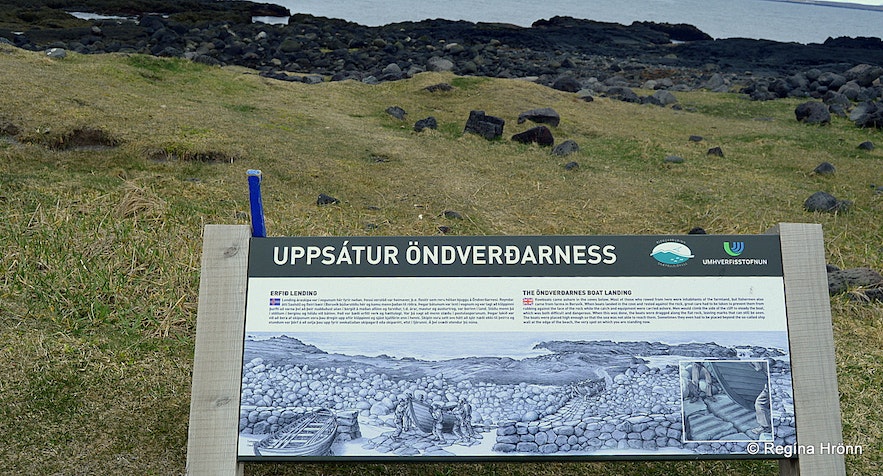 "Öndverðarnes is the name of the farm on the westernmost protruding cape on the Snæfellsnes peninsula. There lived a man called Sigurður, who was skilled in verse-making and was thought to be able to perform magic with his poetry (kraftaskáld).  One cold and frosty winter ice formed on the sea across the whole peninsula, so there was no rowing from Öndverðarnes nor another place under the Snæfellsjökull glacier (undir Jökli).

​But in this area, there is no food to be had apart from what could be caught in the sea, and the people living in this area beneath the glacier (Jöklarar) are hit very badly if they cannot go fishing due to bad weather or other calamities.

When the ice had been blocking this area for a while and nobody could go fishing, Sigurður composed a magical poem. (I am going to add some of these magical verses from the poem here in Icelandic - RHR):

The day after Sigurður had composed this poem the frost yielded and a storm from land made the ice come apart and drift west out to the ocean. The inhabitants of this area (Jöklarar) were relieved and thanked Sigurður's poem for their rescue.

The 4-km-long sea-shore south of Öndverðarnes is the notorious pitch-black lava wall, called Svörtuloft on which I have written another travel-blog:

To visit the westernmost point of the Snæfellsnes peninsula drive west on the main road on the peninsula, road 54, and change to Útnesvegur road number 574.

There are a couple of more sights in this area, one of which is another old well - Írskrabrunnur or the Well of the Irish.

​You can rent a car and drive to the Snæfellsnes peninsula or join one of the guided tours to the peninsula.

If you want to read up on the Magical Snæfellsnes Peninsula then I have written an I-V part travel-blog on what there is to see and do on the peninsula.

Here are the links to my travel-blogs on Snæfellsnes; there is so much history and places of interest everywhere you look:

This travel-blog is a side-blog of The Magical Snæfellsnes peninsula - part II.