My hometown Reykjavík has got an ever-growing Stand-up comedy scene, which I attend regularly - as what is better than a good laugh to get us through the long winters here in Iceland?  Or just any time of the year :) And now there is even a Stand-up comedy show in English for our foreign visitors.

I want to tell you about how it all started and developed into the ever so popular shows of the Golden Gang Comedy - Come Talk Funny, which in May 2017 celebrated their 100th show in just 2 years! 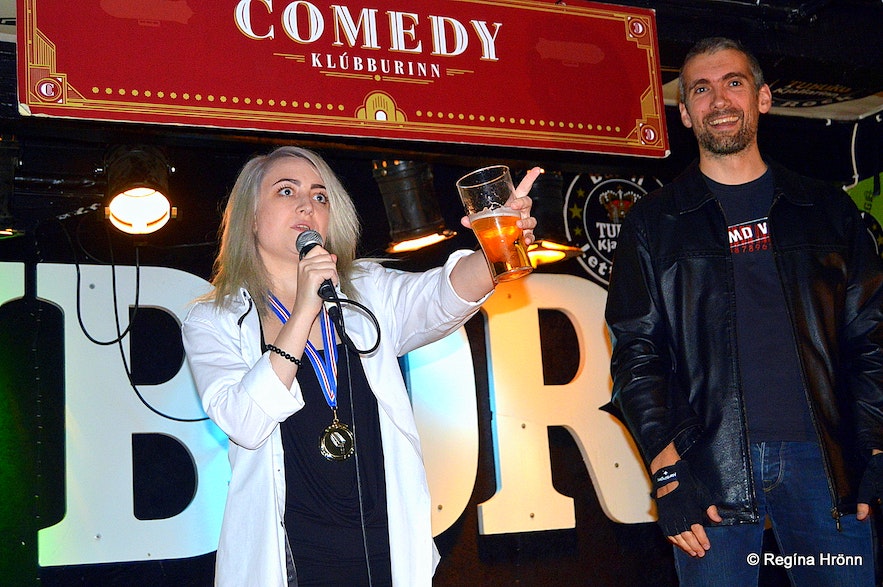 Rökkvi Vésteinsson, Programmer and Stand-up Comedian created the Comedy Club back in 2013 and started the project Tilraunauppistand - Experimental Stand-Up Comedy as a venue for new stand-up comedians to try out their material in front of an audience. They first tried out at Café Haiti but soon moved into the basement of Bar 11 in Hverfisgata street in the very centre of Reykjavík - right opposite the National Museum of Iceland.

My husband, Jón Víðis, who is a professional magician, specialising in comedy magic, and a friend of Rökkvi's, took part in this project. He dragged me downtown to the stand-up comedy shows and Rökkvi started asking me about what I thought of the performance of this and that stand-up comedian.

Here you can see Rökkvi running down Laugavegur street, which is our main-shopping street downtown, dressed only in a Borat swimsuit. Now, what was I getting myself into, I wondered ;)

I didn't know anybody in the group at the time so I started taking photos on my cell phone just to be able to put a face to a name so that I could tell Rökkvi what I thought of individual performances. 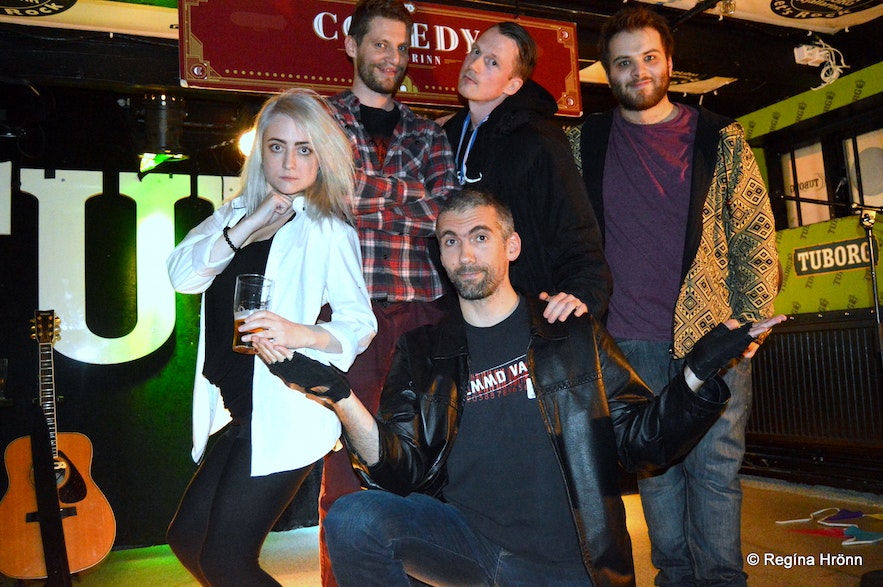 The photos were very bad dark and grainy photos, but thus I learnt the names of the stand-up comedians - some of them were very good, but some of them lacked experience.

This being Experimental Stand-Up Comedy, then that was to be expected. But the atmosphere was great and I always left Bar 11 feeling happy and all laughed out.

I started to love these shows and they lifted my spirit and who would say no to an evening of good laughs?  And seeing that I take thousands of photos of Iceland every year for my travel-blog here on Guide to Iceland,  then it wasn't much of a bother for me to bring my camera with me to the stand-up comedy shows and take some photos, which Rökkvi then posted on the Comedy Club page on Facebook. 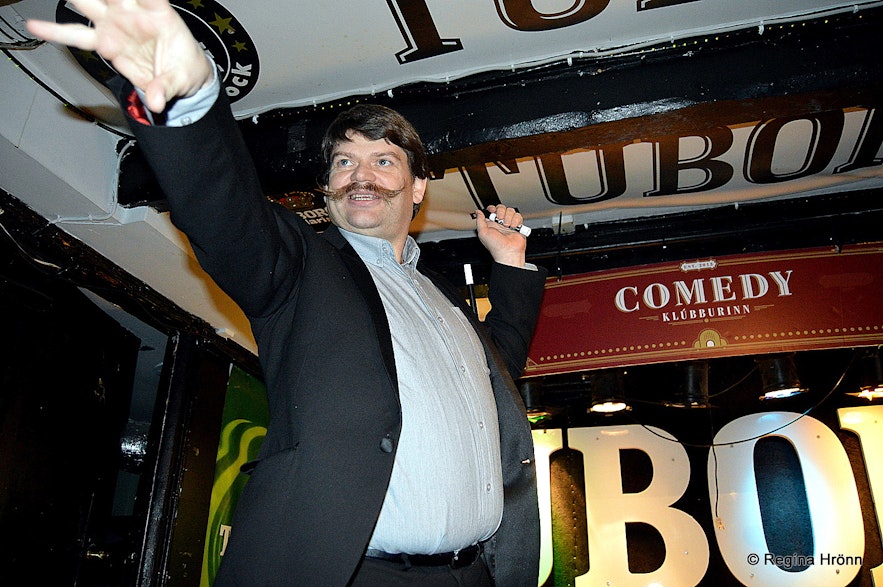 My husband, Jón Víðis, doing magic at the Comedy club

I must have taken thousands of photos of these stand-up comedians over the years. I regard this as my contribution to the stand-up comedy scene here in Iceland, as I could never ever stand up on stage and tell jokes ;)

This is a great venue for the new stand-up comedians to try out their material and to see if they have got "it" or not. And then to get some experience and work on their material. Some of them have natural talents while others become better with time and more training.  And others find out that this scene is not for them.

These amateur shows have opened the door for some very good talents, who got their training at Bar 11 and moved onto other venues with their stand-up performance. 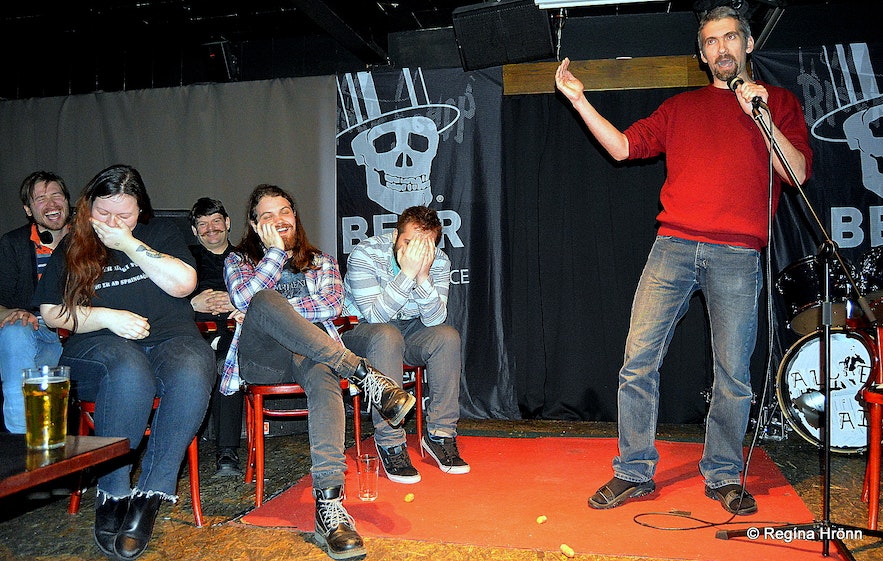 Once I even joined Rökkvi and my husband, Jón Víðis, when they went busking in a restaurant in Stykkishólmur town in Snæfellsnes in West-Iceland. It was great fun, just the 3 of us and the income from the busking paid for the gas back and forth to Reykjavík ;) 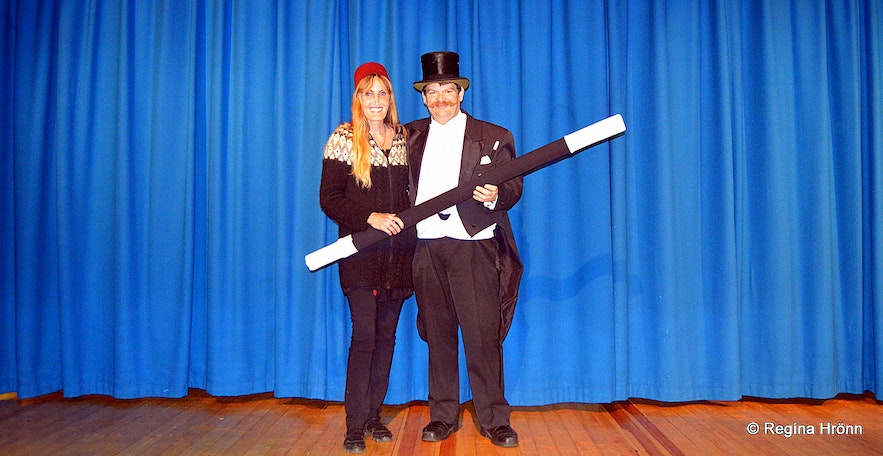 With my husband at a magic show :)

On top of that, I follow my husband around and take photos of many of his magic shows in Iceland. So apart from writing for Guide to Iceland a big part of my time is spent in the entertainment industry - without ever setting my foot on stage though, apart from when the photo above was taken ;)

Now, if foreign stand-up comics are invited from abroad, then the shows in Bar 11 are in English, apart from that the Experimental Stand-Up Comic shows are in Icelandic. 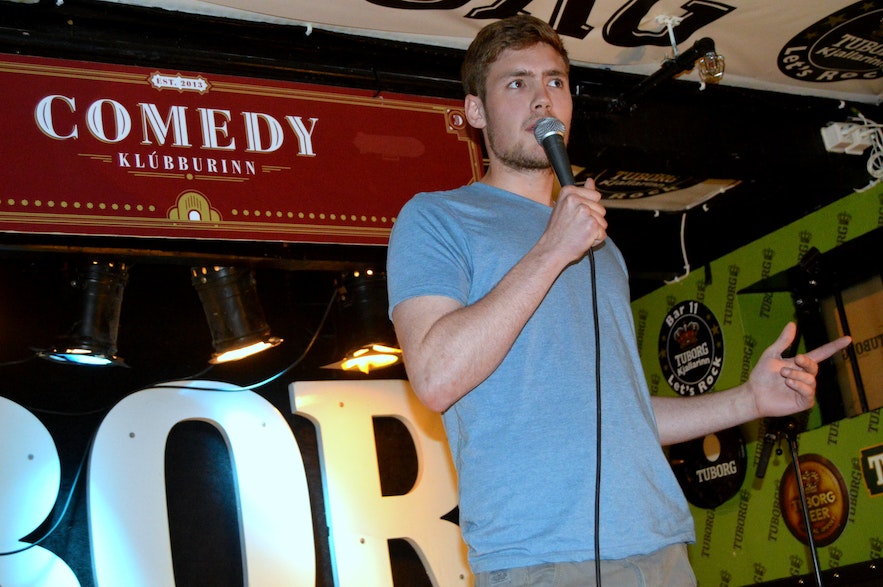 My husband, Jón, and another stand-up comedian were asked to perform twice a week at the hotel restaurant, Uppsalir at Hotel Reykjavík Centrum. That show was in English for the hotel guests and I attended 7 shows and took photos.

It started to be obvious, with all the foreign guests coming to Iceland, that there was a venue for a stand-up comedy show in English.

In the photo above you will see Gísli Jóhann, who in 2015 started the Golden Gang - Come Talk Funny - a weekly stand-up comedy show in English at the bar Gaukurinn downtown Reykjavík. This show was meant to cater to tourists visiting Iceland. 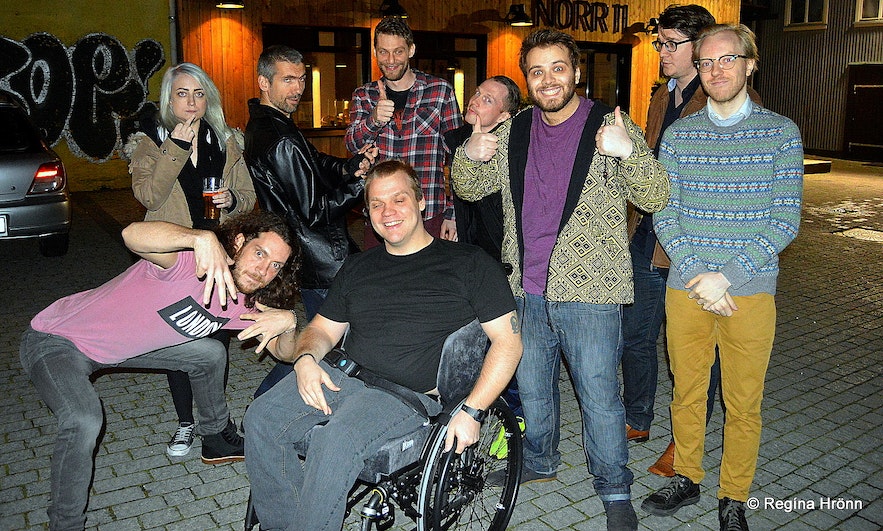 With the gang after one of the shows

A word of warning: the show can get a little (or a lot) sexually graphic, this is the young generation and they are more open about certain things than the older generation was used to.

And there is an occasional mooning by Rökkvi as a part of one of his acts. I have got one too many photos of Rökkvi's naked behind than I should be allowed to ;) But all is good and his wife and I are good friends.

The entrance is free of charge. 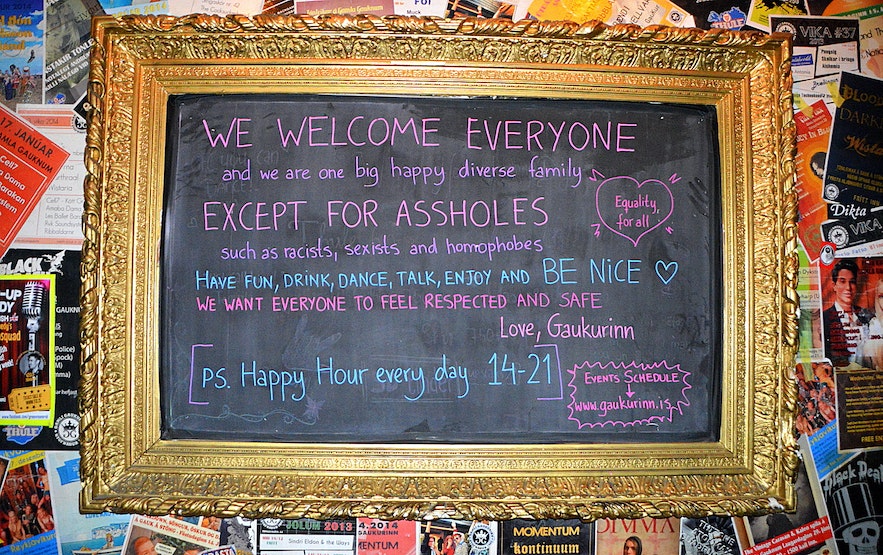 In 2015 some of the best stand-up comedians started looking for their own venue and Gísli created the Golden Gang Comedy Club - with the slogan Come Talk Funny - in English, to reach out to our foreign visitors.

They tried out a venue in Hafnarfjörður town, at the restaurant A. Hansen, but more often than not only a handful of people would show up - so it felt a little awkward listening to Icelandic stand-up comedians performing their act in English to Icelanders ;)  But every start is always a little bit rocky.

It is hard to create a name for yourself and these aspiring stand-up comedians put up a good fight and did not give up.

They eventually found a great venue for their show at the bar Gaukurinn in the very centre of old Reykjavík - Gaukur á Stöng was the original name for it - named after one of our 10th century Vikings, Gaukur Þrándilsson.

The shows blossomed and in May 2017 I attended their 100th Stand-up Comedy show - Gaukurinn was completely packed! 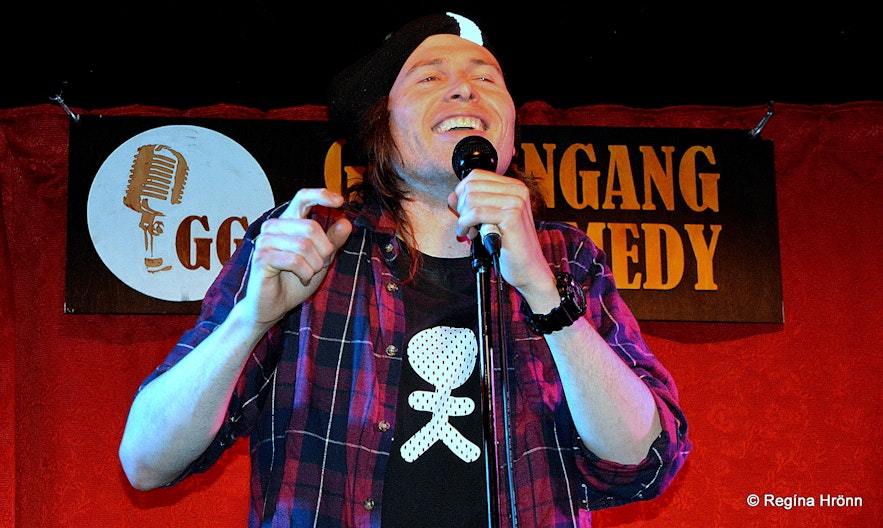 They have the advantage of having English as their mother tongue, so they stand out a bit. 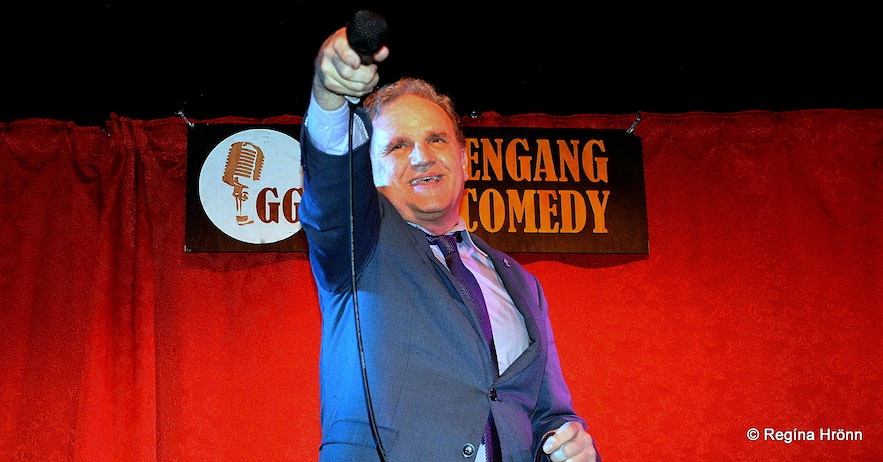 The congenial American Nick Jameson in my photo above is an actor who has got a long list of credits on IMDb with more than 200 film credits. Even though he is an American then his British-English "Good day to you, Sir!" act is a delight to listen to and shows his great acting skills.

Darren Forman is an American actor, who teaches drama at the Icelandic Film School - and his performance is, of course, impeccable - a very funny guy.  You can see him in my photo below. 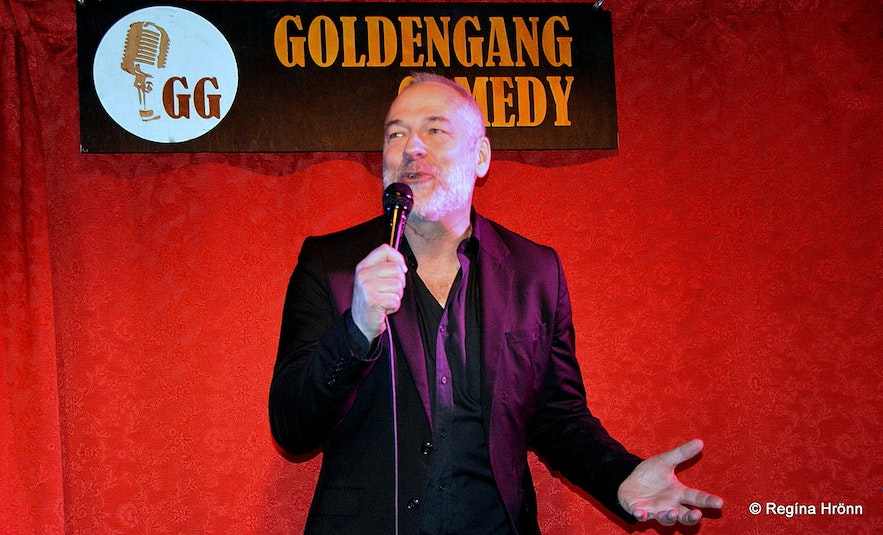 Then there is the Australian actor, comedian and cabaret performer Jonathan Duffy a.k.a Jono. Jono's flatmate, by the way, used to be the sassy drag queen Wonda Starr, who used to blog for Guide to Iceland. She, unfortunately, left Iceland recently.

One has got to love these drag queens, they sure add colour to the world. I seek out drag shows where ever I go in the world and Wonda Starr could be seen performing at Gaukurinn from time to time. And now she has left...

Jonathan Duffy is the lovely guy in my photo below. I am sure he regarded me as a stalker once when the Golden Gang was performing on his birthday and I took the usual 100+ photos of the gang ;) Sorry about that, Jono, I did not mean to freak you out! Jono used to write for Guide to Iceland. 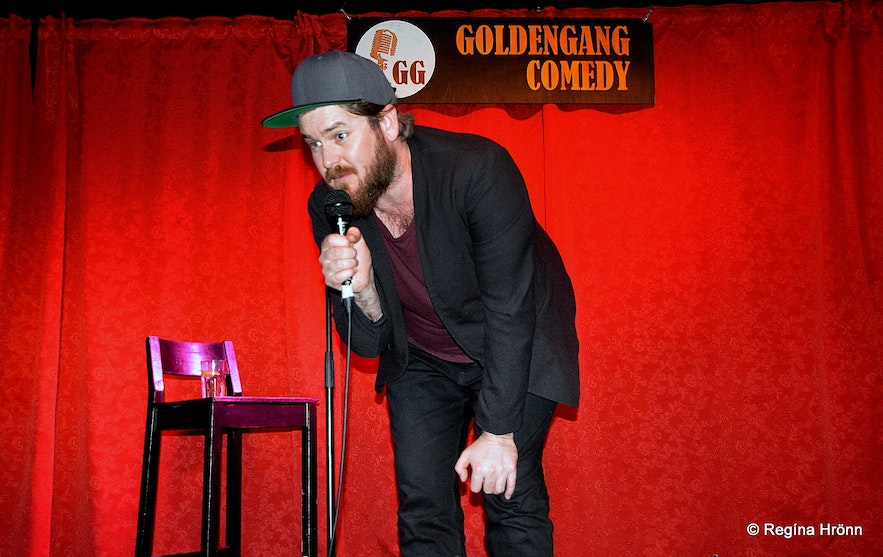 Other Icelanders in this hilarious group, to name just a few of them, are the filmmaker Sigurður Anton Friðjónsson "Toni" and Greipur Hjaltason, who is getting better and better each time I see him - be prepared to laugh yourself silly when he is on stage, I know I do ;)

Then we have the actor Jón Magnús, who comes from a whole family of Icelandic actors - he is the one showing us a bit of nudity in my first photo - I am sure he doesn't mind me adding it as the opening photo, given that he himself has used it as a profile photo on Facebook ;) 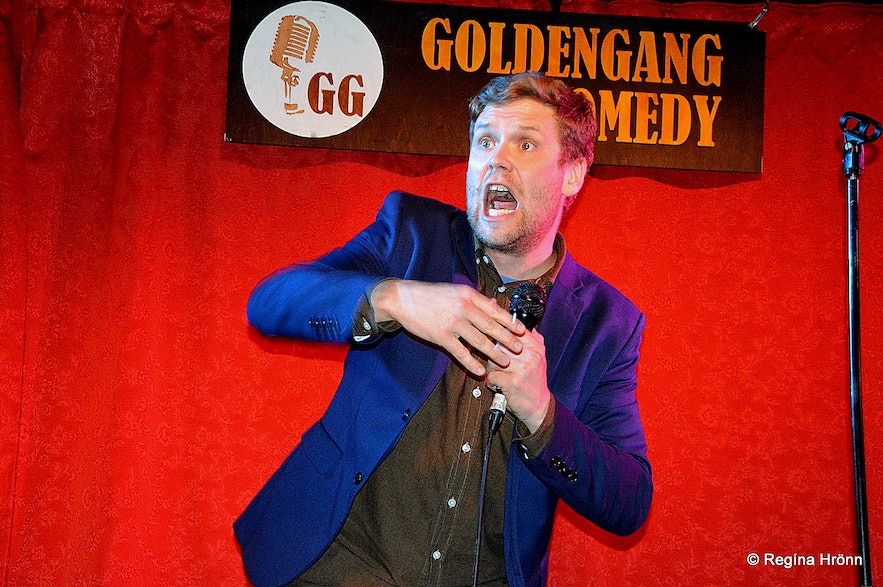 I am only naming a few of the stand-up comedians in this group, there are many more. 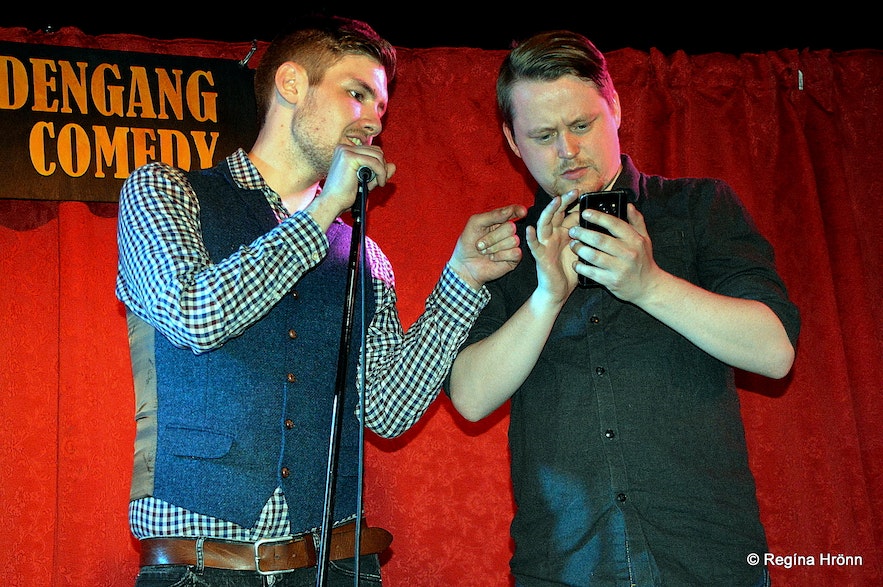 It has been interesting and great fun following the growth of the stand-up comedy scene in Iceland - always behind the scenes, but contributing to their growth by taking their photos for 5 years now and donating them to the Comedy Club. And I will continue to do so as long as I will be in the need of a good laugh :)

With me in the photo below is the owner of the Golden Gang Comedy - Come Talk Funny, the stand-up comedian Gísli Jóhann. He is also the owner of the Reykjavík Fringe festival - a very energetic guy who makes things happen - kudos to him for a job well done!

The New York Times posted an article on the Golden Gang in January 2017 if you want to read more about this funny group of stand-up comedians in Iceland. 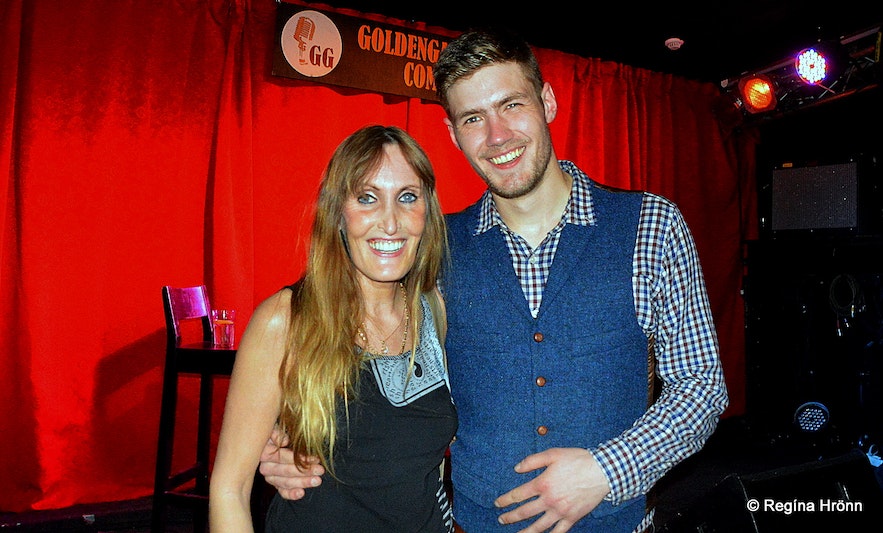 If you want to be on stage then look up Golden Gang Comedy on Facebook and send them a message.

In the summer of 2019, the Golden Gang Comedy moved to another location and Soulflow Comedy will have an open mic instead on Mondays at Gaukurinn. It is a show for "women and queers" to begin with and Katrín Björk, who used to write articles for Guide to Iceland, will be performing there.

The Golden Gang moved to the Secret Cellar in Lækjargata street downtown. The owner of that comedy club is the magician Bjarni Baldvinsson and here you will f.ex. find the great Canadian stand-up comedian, York Underwood, who wrote articles for Guide to Iceland for a while.

Have a great time at stand-up comedy in Iceland :)