Þakgil and Remundargil canyons are two hidden gems in South-Iceland. They are located in a less visited area close to the very busy Vík and Reynisfjara black beach on Iceland's south coast. The road to these beautiful canyons will take you through such amazing terrain.

The drive up to Þakgil canyon is some 15 km and it takes 30 minutes to drive all the way to the canyon without stopping. I, on the other hand, am always looking for interesting things to write about, so I made several stops on the way. Amongst the stops I made was a stop at Stórhellir cave, which is a relatively large cave by the road. 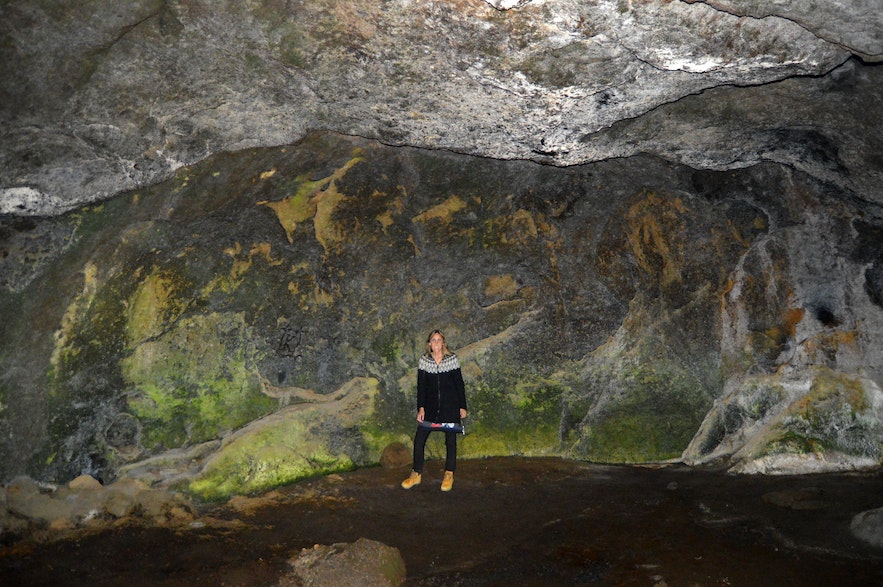 The cave cannot be seen from the road and I actually parked the car on top of it! In this cave, dances were held for the people living in the vicinity.

The sandstone takes on all kinds of forms and shapes here. One of them is in the shape of a face of a troll. I think it looked like Grýla, the mother of the Yule Lads here in Iceland.

It is a troll of some sort and it is called Tótanef - the Nose of Tóti, named after Þórarinn Einarsson, who lived in Vík. It is located in Lambaskörð in Hólabrekkuheiðar heaths. 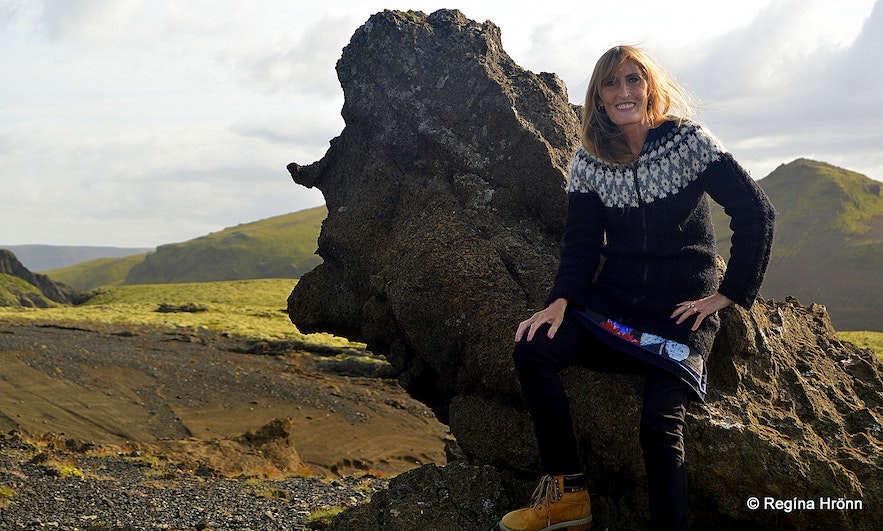 There were different caves and formations on the way in Lambaskörð and such beautiful landscape, barren, but so ruggedly beautiful.

The road is a gravel road, but suitable for all cars in the summertime. This road used to be part of the main road until 1955, when a glacial burst in the river Múlakvísl cut off the bridge on the main road.

You can stop at a viewpoint further up the road, from where there is a beautiful view of the river Múlakvísl and the south-coast. The river Múlakvísl is a glacial river originating in Höfðabrekkujökull glacier. In the distance in my photo above, you can see Hjörleifshöfði promontory standing alone on the sand plains. 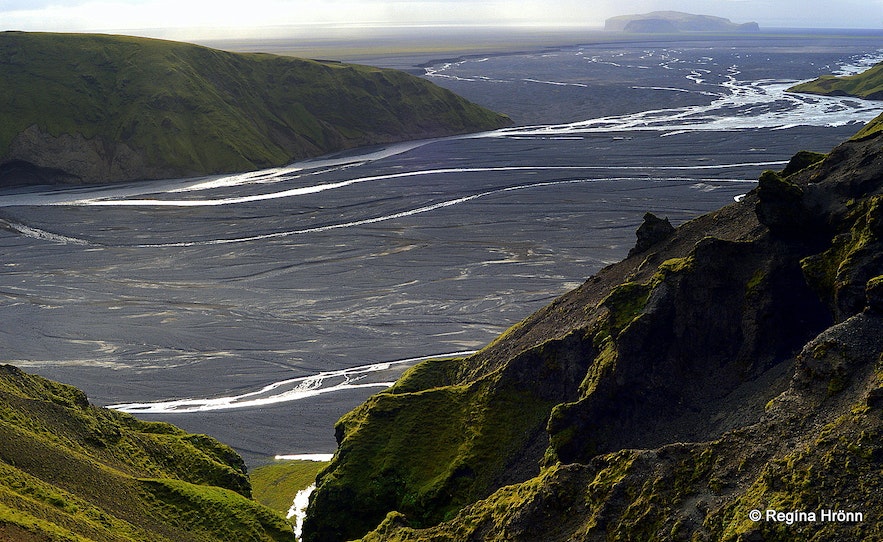 On top of Hjörleifshöfði, you will find the Viking burial mound of the second settler of Iceland, Hjörleifur Hróðmarsson, who was killed here in year 875. Hjörleifur was the blood-brother of Iceland's first settler Ingólfur Arnarson.

You can find out more in my 2 travel-blogs on Hjörleifshöfði promontory, where you will also find the Yoda Cave:

Hjörleifshöfði in South-Iceland - Part II - the Hike, the Inhabitants and the Yoda Cave 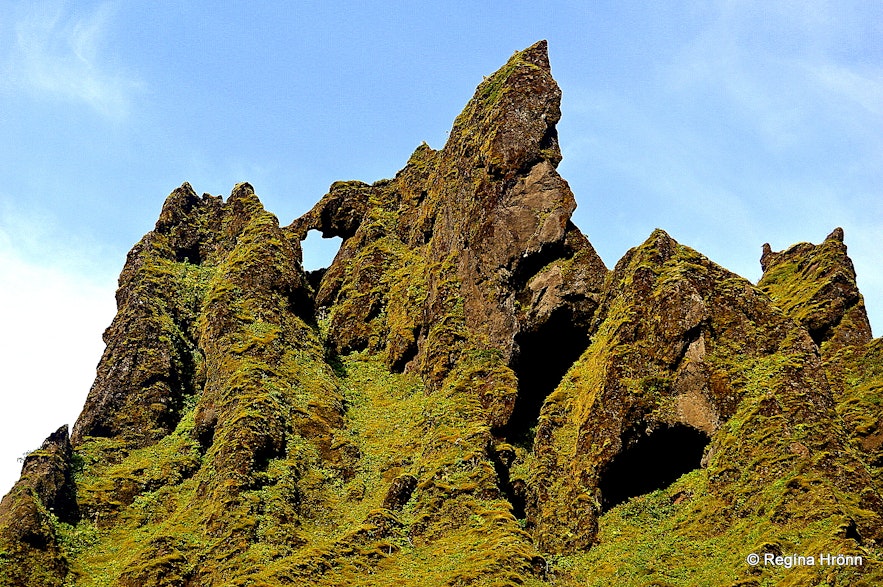 A little further up the road, we reached our destination, Þakgil canyon. Here we are very close to Katla glacier and volcano, which is one of the most dangerous volcanoes in Iceland - and due to erupt for some years now!

Þakgil is located between Mýrdalsjökull glacier and the vast sands of Mýrdalssandur in Höfðabrekkuafréttur.  All of a sudden this beautiful canyon opened up, more like a green valley than a canyon though. 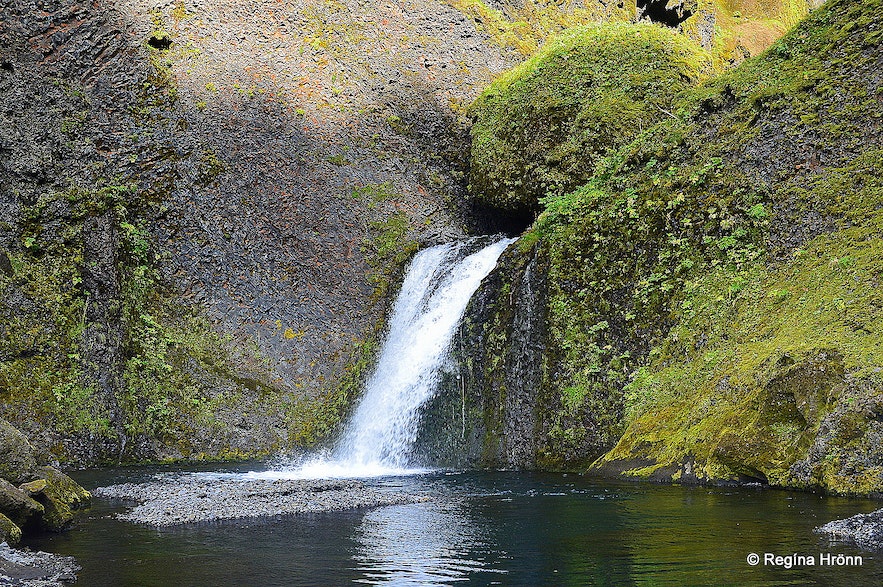 I have always found this name to be a little mysterious Þakgil - the Roof Canyon. I have heard that it is called by this name as the weather is pleasant there, a shelter from the constant wind in my country.

And it sure looks like an oasis, a beautiful green valley surrounded by strangely formed spiky mountains. The vertical mountains are actually covered in velvety green moss as well, which is typical for such oases as Þakgil. 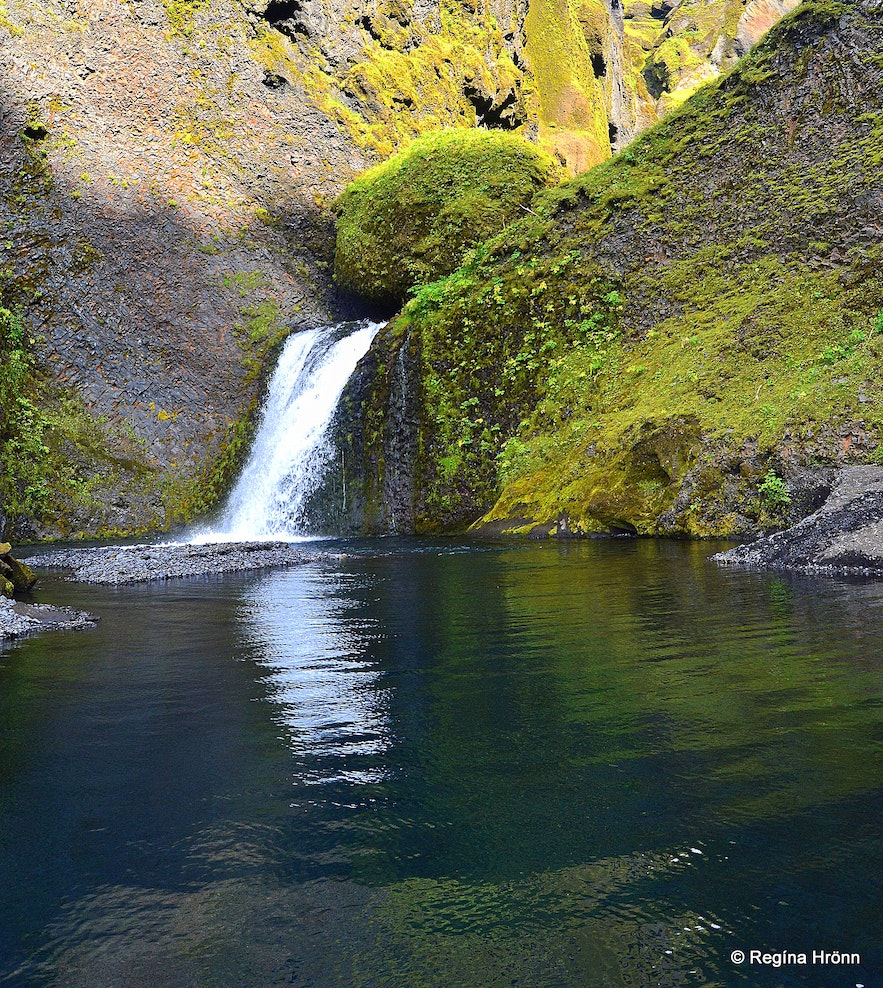 A lovely waterfall in Þakgil canyon

Here you can also find a tiny hydroelectric plant - from which Þakgil's camping site gets its electricity.

The common dining area for the camping site is located in a cave with tables and benches, a fireplace, and a barbecue. Candle holders are fastened to the walls so the cave can be lit up at night. 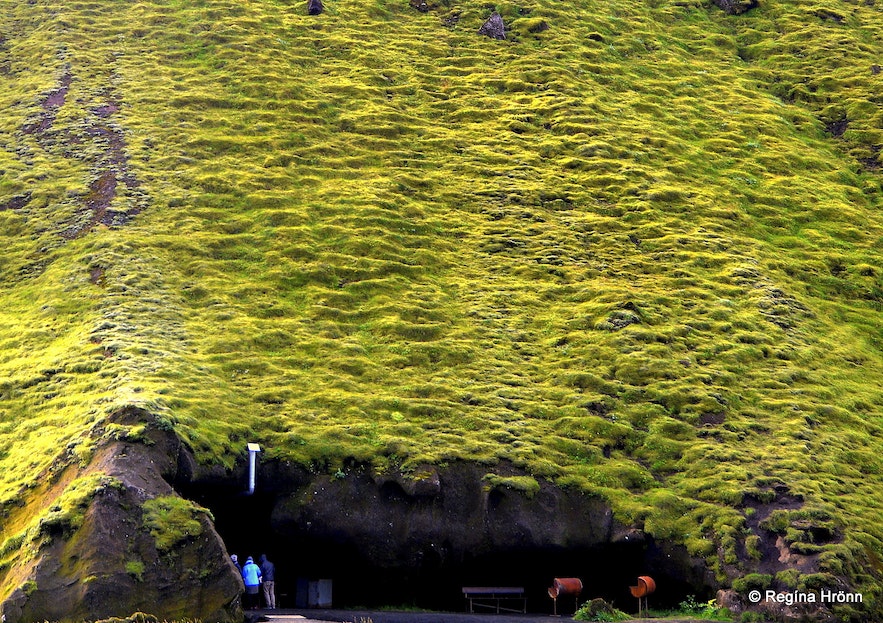 The cave in Þakgil canyon

The camping site is open from June 1st until the 31st of August. It rarely gets dark at night in June and July, but it starts getting dark late in August, so by then, it must be so romantic sitting inside the cave with the candles lit, the fireplace lit, and maybe a guitar playing :)

Sometimes groups of people visit Þakgil on a day-trip and have lunch inside the cave. We always stay in a tiny summer cottage close to Vík so we didn't stay for the night in Þakgil. We had lunch in the cave and explored the two canyons for the major part of the day.

The camping site owners, Helga, and Ágúst created this small haven inside the cave. I think this is a wonderful idea. There has only been a camping site here in Þakgil from 2000, and in 2007 the pine cottages were brought to Þakgil. 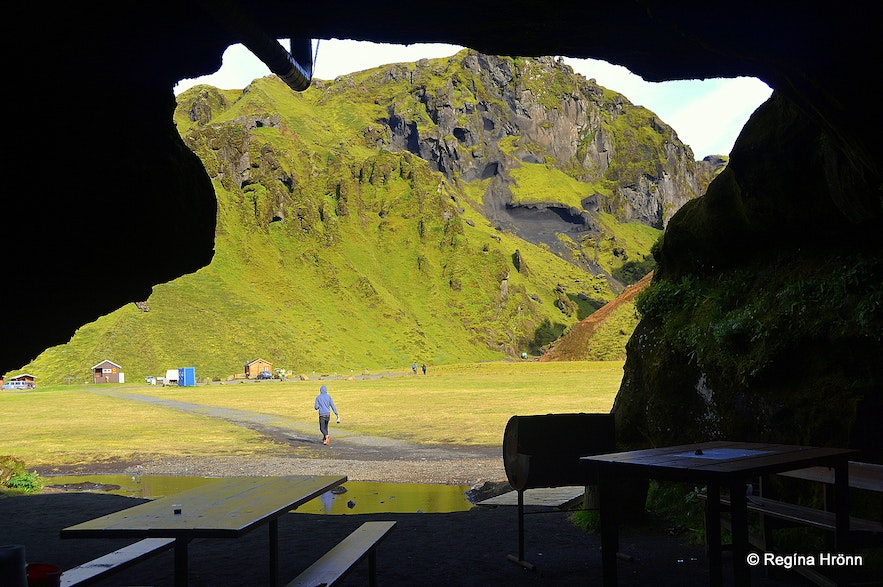 Inside the cave in Þakgil

The surroundings here are out of this world, so mystical. Its neighbouring canyon, Remundargil canyon, is even more majestic, so do pay it a visit as well. It is only a short distance away from Þakgil canyon. 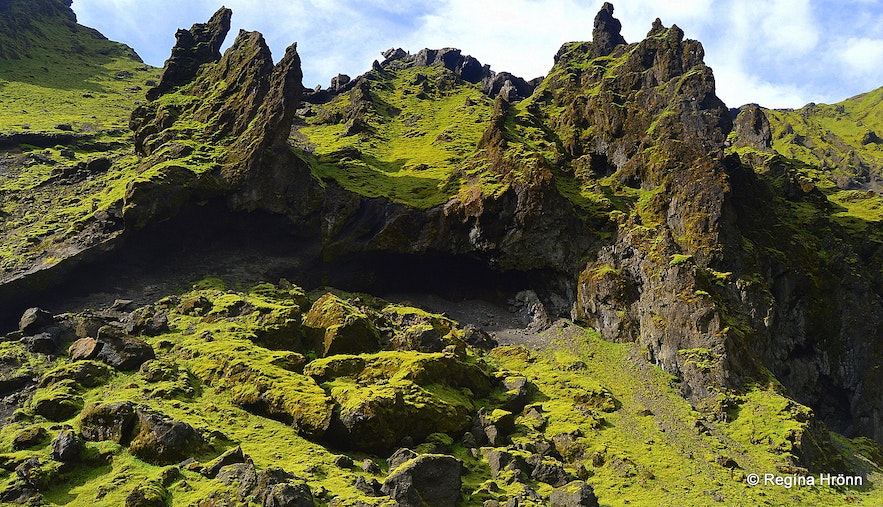 Remundargil canyon is one of the ruggedly beautiful hidden treasures in Iceland and a real gem together with its neighbouring canyon, Þakgil. This canyon looks like something out of the Game of Thrones series!

A beautiful hike takes you to the bottom of the canyon. It is possible to drive a bit into the canyon, but I would recommend that you leave your car in the parking lot and don't go any further by car. It is only a gravel parking lot, nothing fancy, as here we are off the beaten path in Iceland. 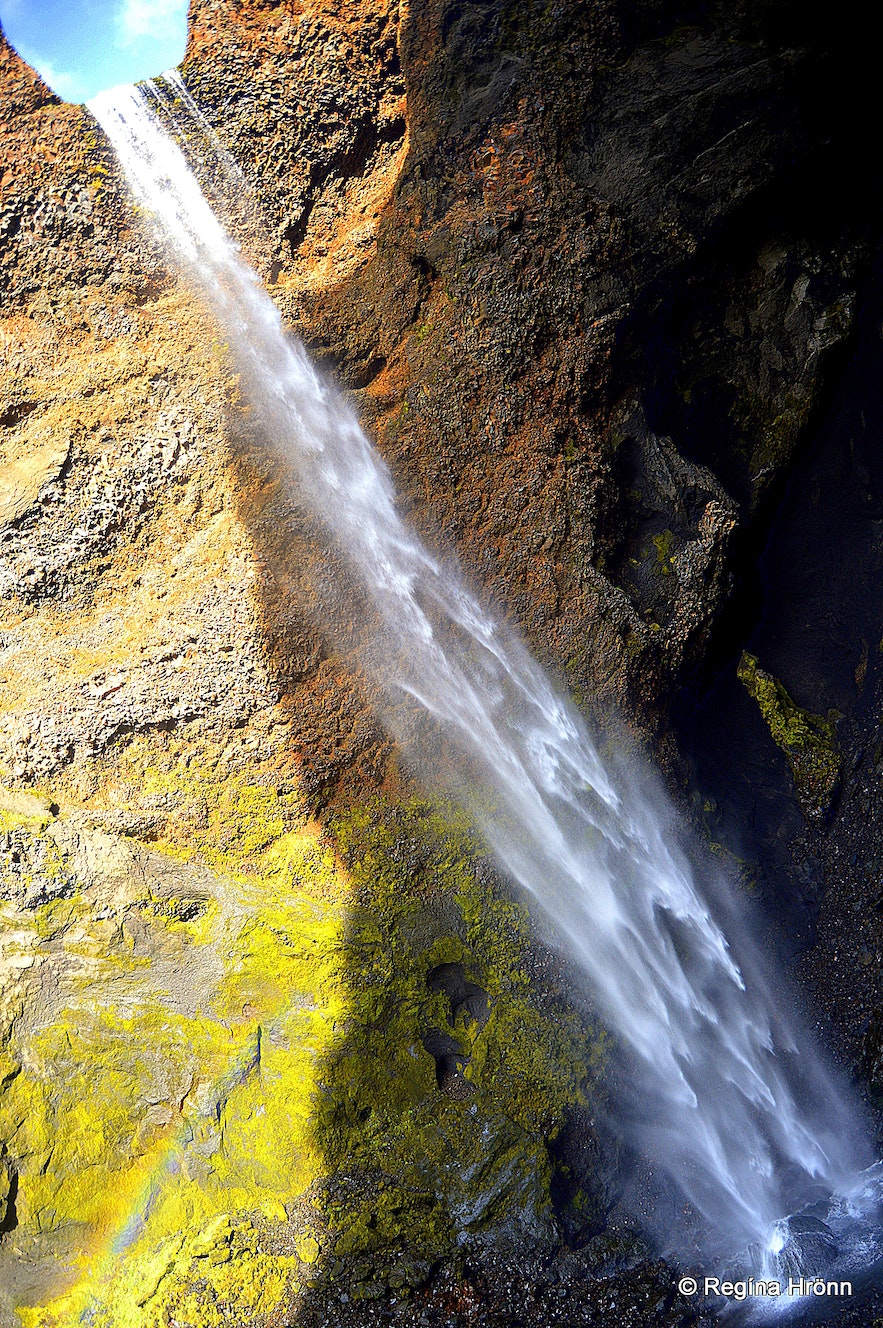 The hike to the waterfall takes an hour back and forth (30 minutes each way) and it is so worth it. The surroundings here are breathtaking, so majestic and so quiet. We met 2 guys in the canyon and felt alone in the world after they left. I felt so totally one with nature that I did not want to leave.

The canyon is deep with tall cliff faces. It gets narrower as we draw closer to the waterfall, Remundargilsfoss. The waterfall is tall but not very wide, so it is more of a cute waterfall, not a forceful one. 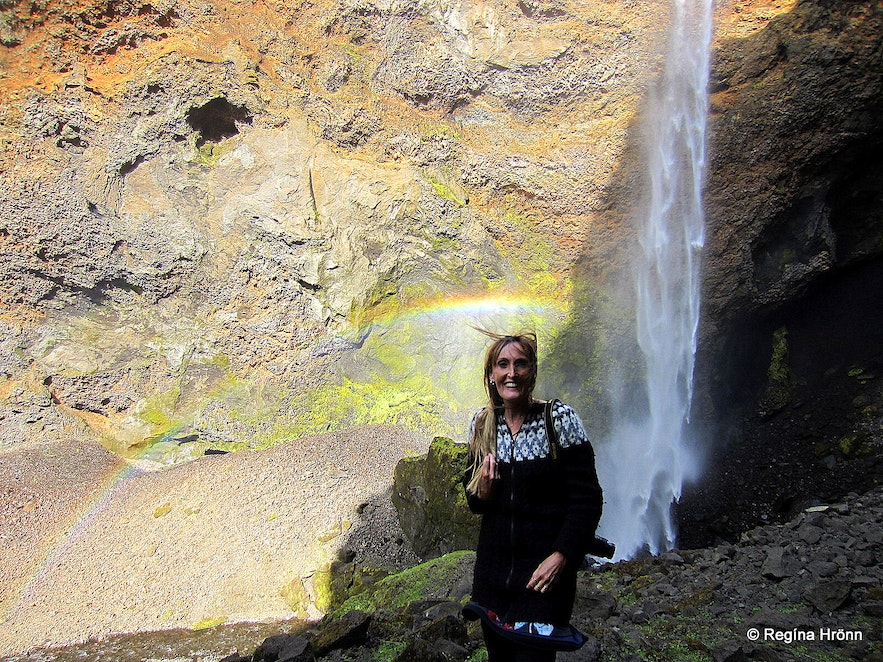 Sitting by this waterfall filled me with such serenity and I felt ever so close to nature with the canyon enveloping me. We were in luck that the sun was out and there was a beautiful rainbow by the waterfall.

It wasn't always this peaceful in Remundargil canyon. When the dreaded Katla volcano erupted in 1918 part of the massive glacial outburst flooded through Remundargil canyon. That must have changed the surroundings a bit as these floods are massive and extremely forceful.

It made me shudder thinking about this forceful flood a hundred years ago in this peaceful canyon. 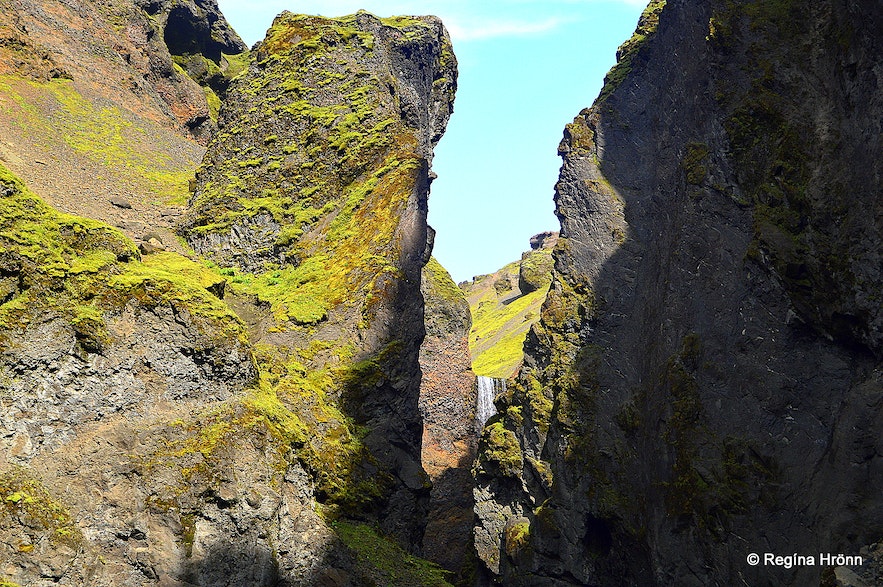 I love this photo - hiking into Remundargil canyon

The origin of the name of the canyon, Remundargil, is not certain. The only Remundur known to us Icelanders comes from the "Rémundar saga keisarason" or the Saga of Rémundur the son of the Emperor, dating back to the 14th century.  The canyon might be named after him.

The canyon also goes by another name by some of the locals, Reðmundargil, a local tour guide told while on our way to the close by Katla ice cave. 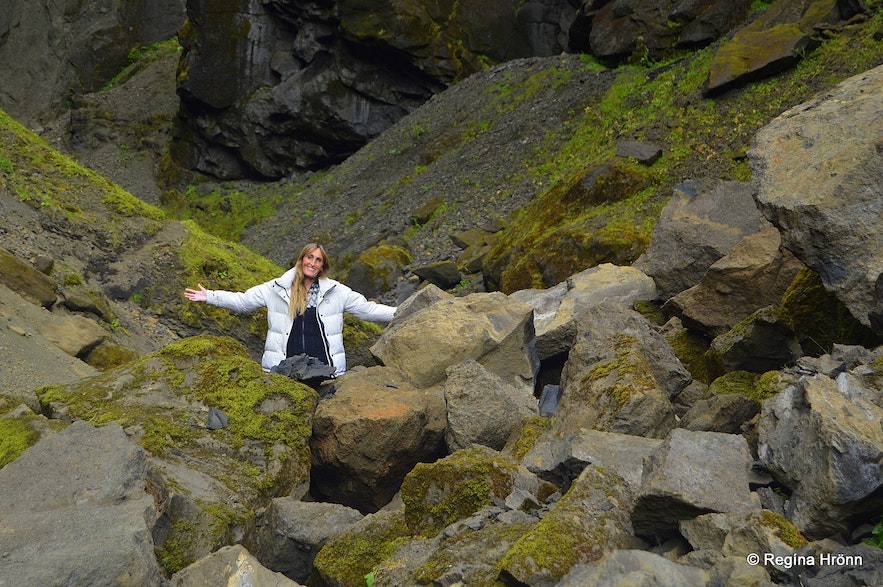 The hike in Remundargil canyon isn't always an easy one ;)

The hike into the canyon was easy, but there are some rocks on the way across which we had to climb.

That is the only difficult part of the hike, so to speak, and it is so worth it when you reach the end of the canyon and sit by the lovely waterfall, enjoying nature and its forces. Just be careful of falling rocks.

I wasn't aware of this when I visited the waterfall, but another guide pointed this out to me later on. 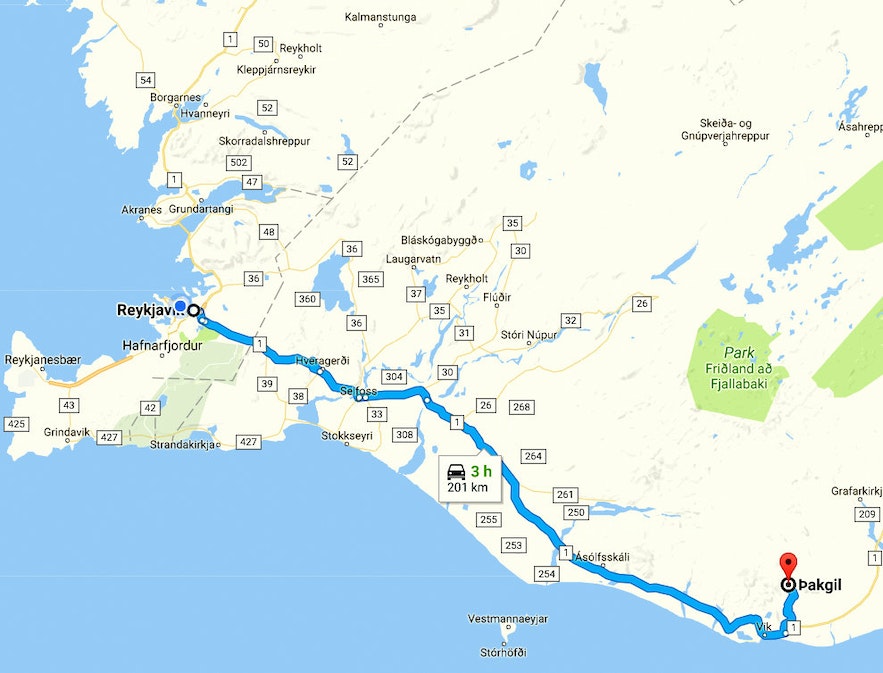 Turn left on road 214 five km east of Vík and drive for 15 km until you reach Þakgil. The road is a gravel road.

If you don't want to drive yourself, then there are many various guided tours of South Iceland.

Have a lovely time visiting the hidden canyons in South Iceland :)