One of the many spectacular sights on the Reykjanes peninsula in southwest Iceland is the amazing Lambafellsklofi rift in Mt. Lambafell, which most likely dates back to the second last glacial period.

It is a sight worth seeing, as here Mt. Lambafell almost got ripped in two due to dislocation or tension fractures. And it is possible to hike inside the narrow rift. 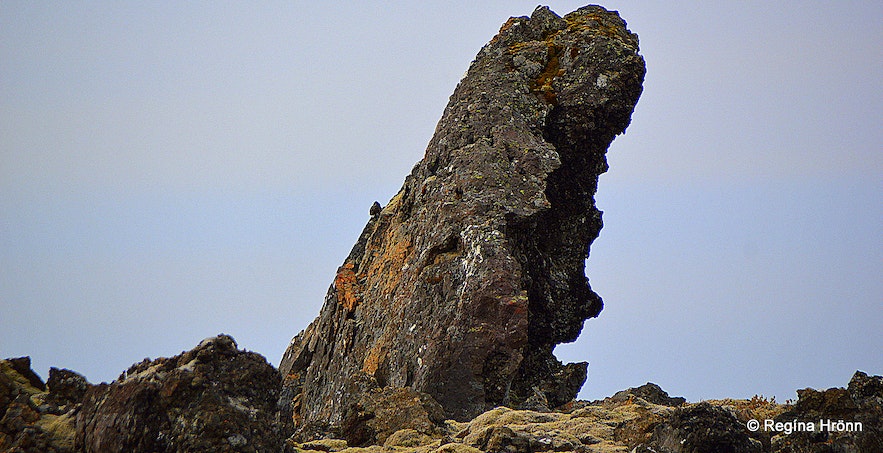 A huge lava rock in the vast lava field

This whole area is a volcanic area, and you will see volcanoes and lava fields left and right.

To reach Lambafellsklofi, which is also called Lambafellsgjá, we drove through a vast lava field, called Afstapahraun, for the longest time, on a very bumpy road.

I tell you that this road is not for those of us who suffer from car sickness, and I know of one friend of mine who had to turn back without visiting the sights as she got so carsick. 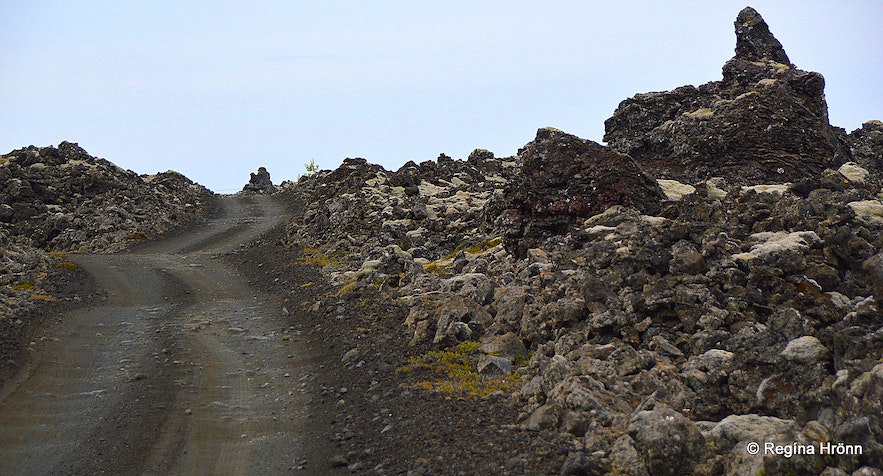 Lava formations by the road

There were so many beautiful rock formations in this huge lava field that we stopped the car on several occasion to take photos. There were some huge lava rocks standing straight up from the lava field and I thought to myself how many elves there might be living in these huge rocks.

But as those of you who read my travel-blogs know, then we Icelanders share our country with hidden beings, who live in rocks and hills. 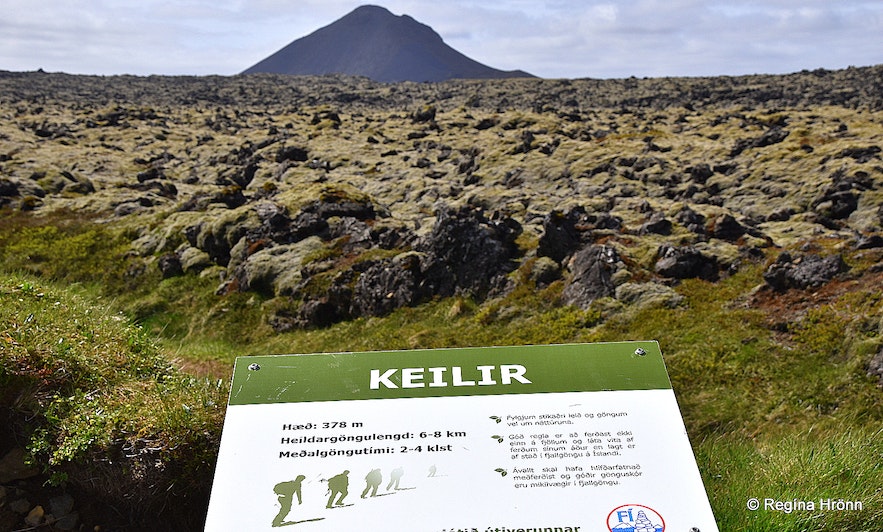 Mt. Keilir in the distance - the hike to Keilir is some 3 km

After a while, we reached the parking for the Mt. Keilir route, but this conical shape volcano is one of the landmarks on the Reykjanesskagi peninsula. It has the perfect volcano shape, i.e. what many people think that the average volcano should look like.

It is very popular to hike up this palagonite cone, and there were several cars parked here. I have never hiked up this mountain, but my husband says that you take 2 steps up and then slide 1 step down the mountain as there is so much loose gravel.

On top of Mt. Keilir, there is a view-dial, so I must do this hike soon. A hobby of mine is to look for view-dials all around Iceland :) 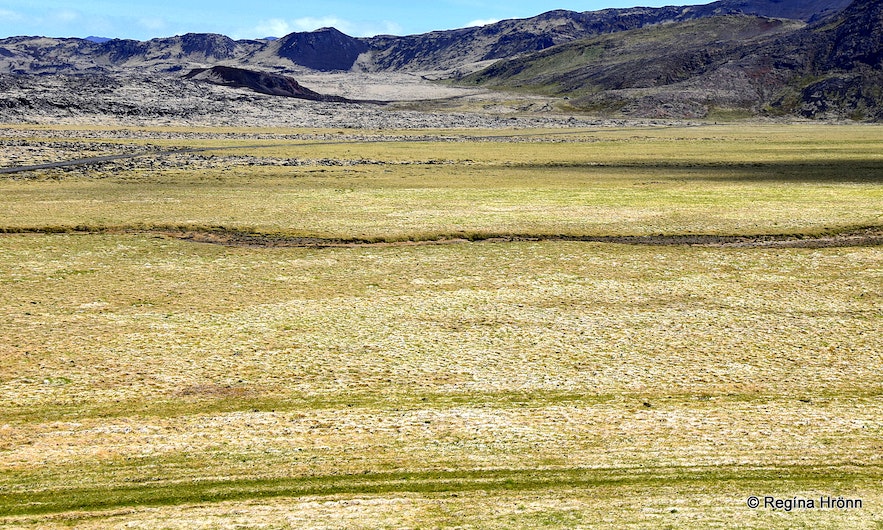 We only stopped here to take a few photos and carried on driving the road leading by Höskuldarvellir plains for about a km until we reached the Eldborg scoria crater, where you will find some parking spaces.

Höskuldarvellir plains is a grassy plain around 1 km wide and 1 km long. There are not many grassy plains here, only lava all over the place. So the plains stand out as it were. 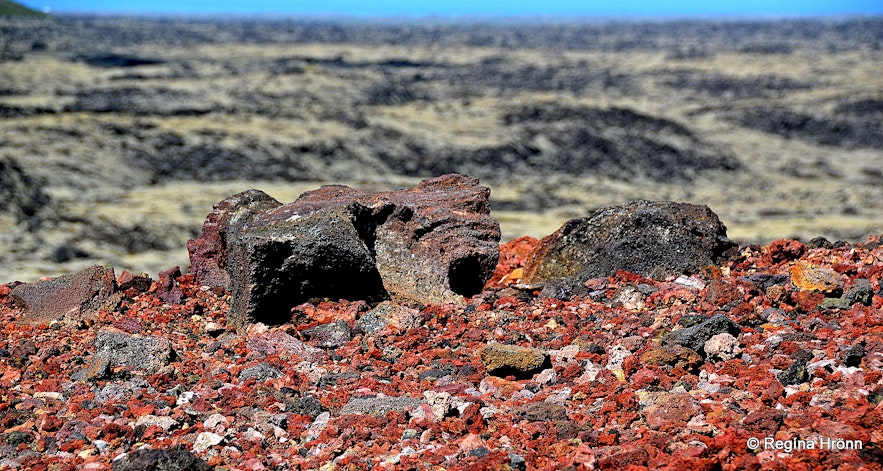 On top of the Eldborg scoria crater

We first hiked up to the top of the Eldborg crater to see what this very colourful crater looked like and to get a better overview of this area.

Eldborg is a scoria crater and a spatter cone with bright red lava rocks and very colourful lava formations. This crater has also been called Ketillinn or the Kettle. 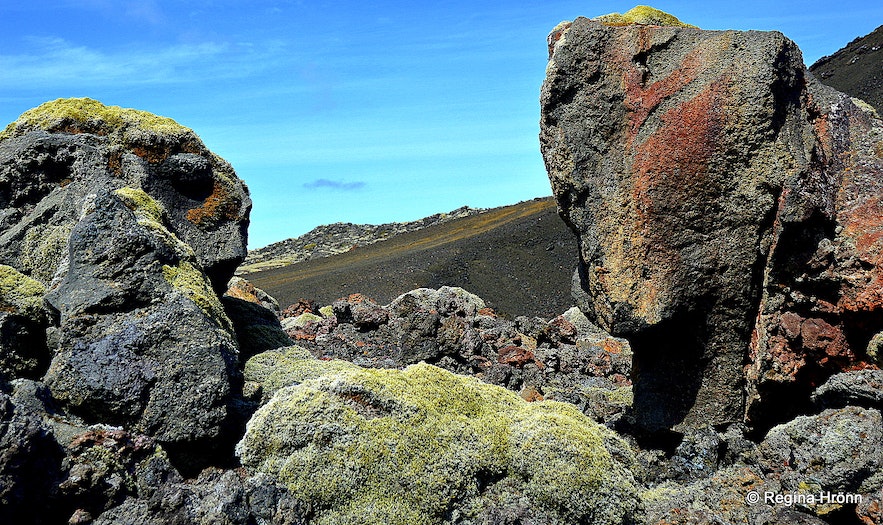 Unfortunately, this beautiful crater has, like so many craters in Iceland, been used for gravel mining for roadbed, so it is very damaged. It is beautiful still, but it must have been a sight back when it was still undamaged.

From the top of Eldborg, there is a great view of the surrounding area and here we could clearly see the Lambafellsklofi/Lambafellsgjá rift in Mt. Lambafell. And we could see as far as the Great-Reykjavík area. 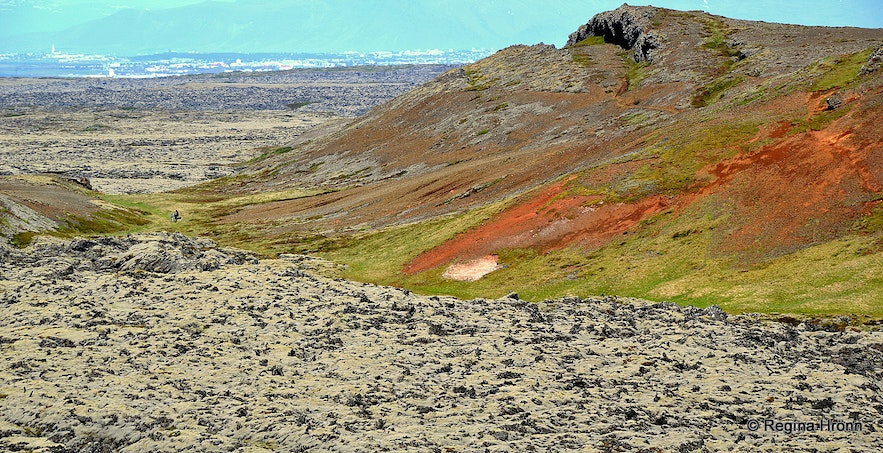 The view from the crater Eldborg of Mt. Lambafell where you can see the Lambafellsklofi rift

From above we could see the trail leading to Mt. Lambafell and some people on the trail. This area is not marked and there is no sign to indicate where the trail begins.

We then followed an unmarked trail leading around Mt. Lambafell and into the Lambafellsklofi/Lambafellsgjá rift. The hike from Eldborg crater to the rift is about a km or so, a very easy hike. 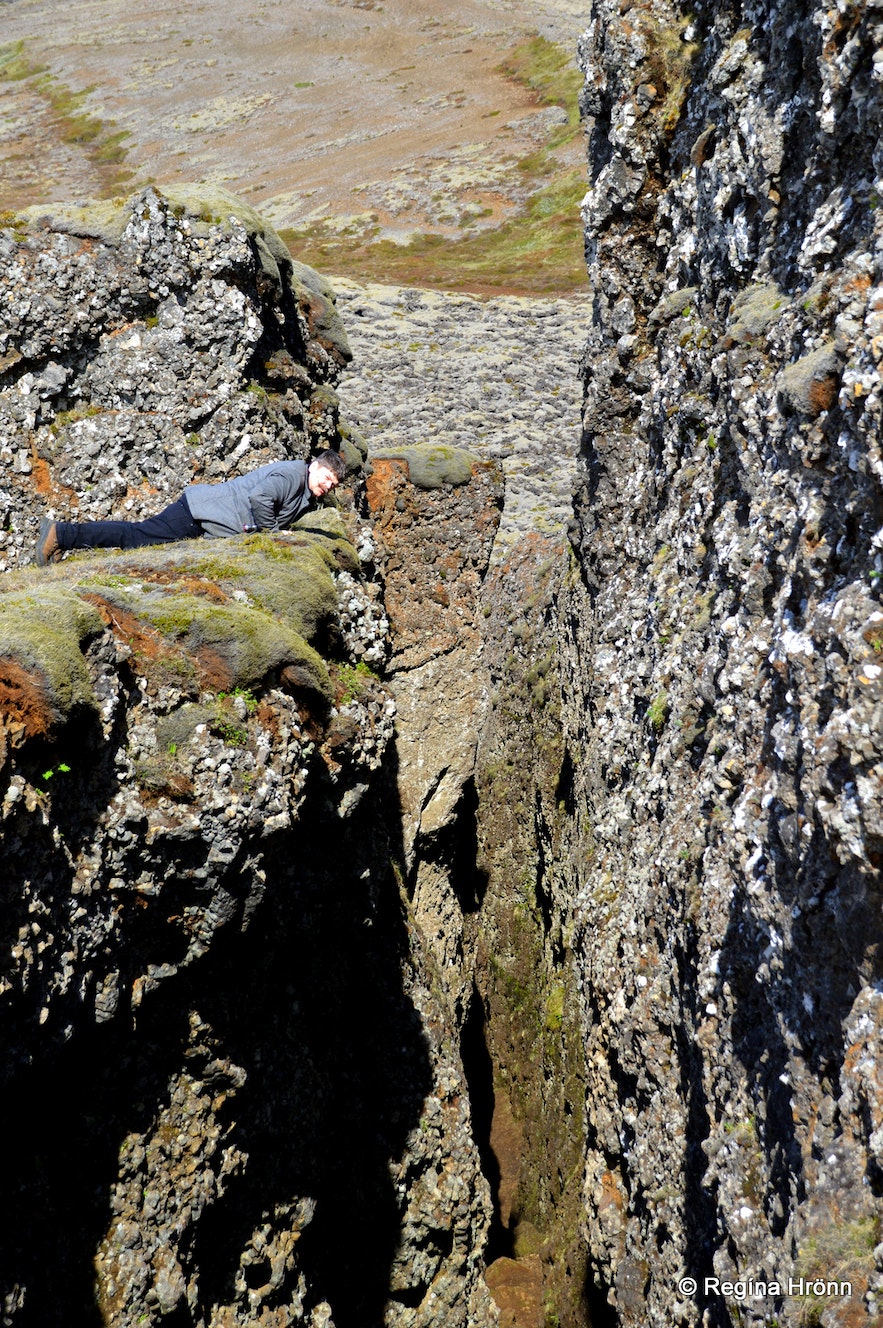 My husband looking into Lambafellsklofi rift from above

We left the trail and hiked up on top of Mt. Lambafell to see what it looked like from above. We first arrived at the upper part of the rift, but we found it a bit scary hiking into the rift from the upper part. Or rather, I found it scary, my husband didn't ;)

So we hiked across the mountain and entered the rift from below. 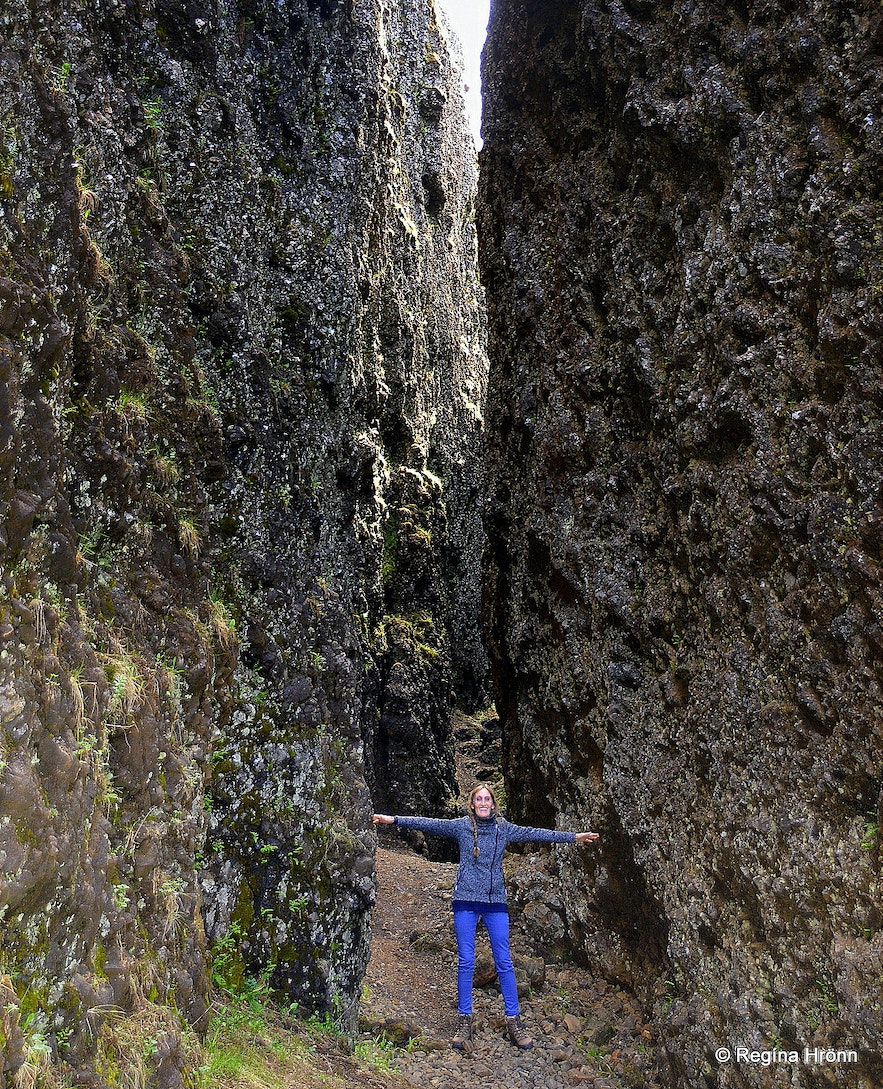 Inside Lambafellsklofi rift almost touching both sides with both hands

Lambafellsklofi/Lambafellsjá rift is a narrow rift with tall vertical walls, which makes for a spectacular short hike into the rift, which is approximately 150 meters long. The walls of the rift are 20-25 metres high (I have read that the rift is around 50 metres deep at its deepest point).

At its narrowest location, the rift is only a couple of metres wide, and I could almost touch both sides of the walls with my stretched out hands.

The first part of the path is even, but it is dark in some places as these tall walls almost block out the daylight. If you look closely then you will see pillow lava inside the rift. 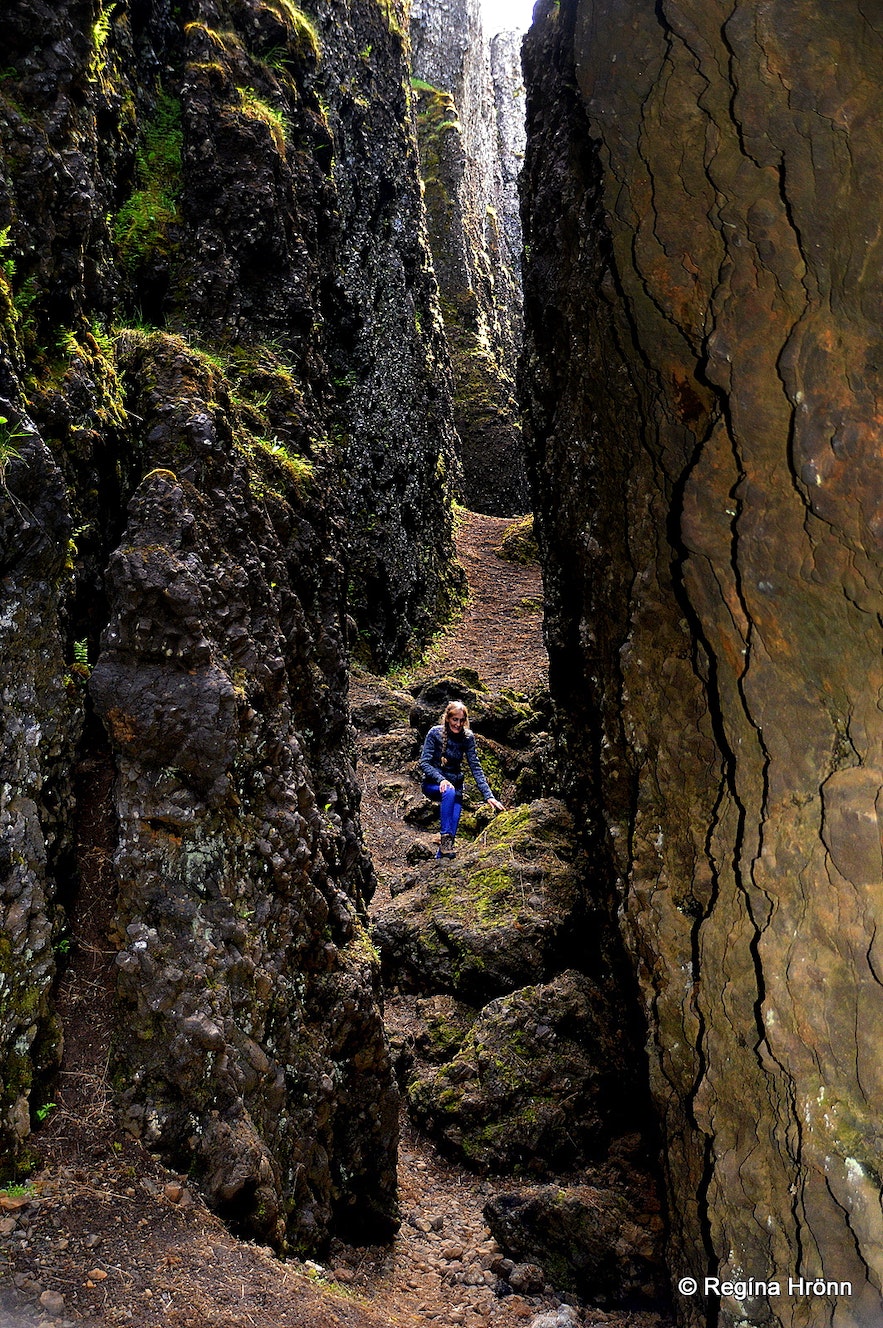 We only hiked some 3/4th parts out of the 150 metres into the rift, as then you have to crawl up some rocks to exit the steeper part of the rift at the location on top of the mountain where we had been a little earlier.

So we exited the same way and hiked around the Lambafell mountain and back to the Eldborg crater. It is a lovely, easy hike. We then checked out the small geothermal area by Mt. Trölladyngja a stone-throw away from Eldborg. 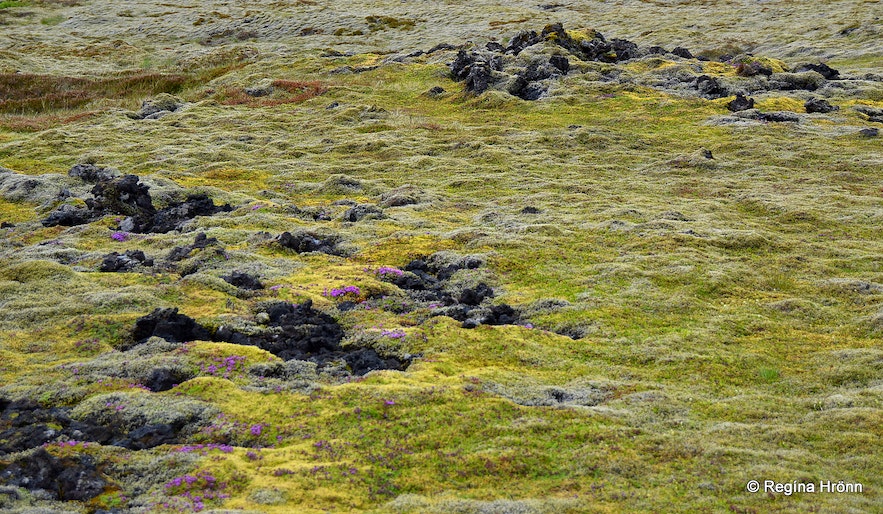 Here the earth is boiling beneath our feet!

Be careful if you visit this area as only the discolouration of the moss and faint steam indicates that the earth is boiling beneath our feet. So we never know if we will be stepping into boiling water!

I believe that this area is called Jónsbrennur or The Fires of Jón. Correct me if I am wrong. 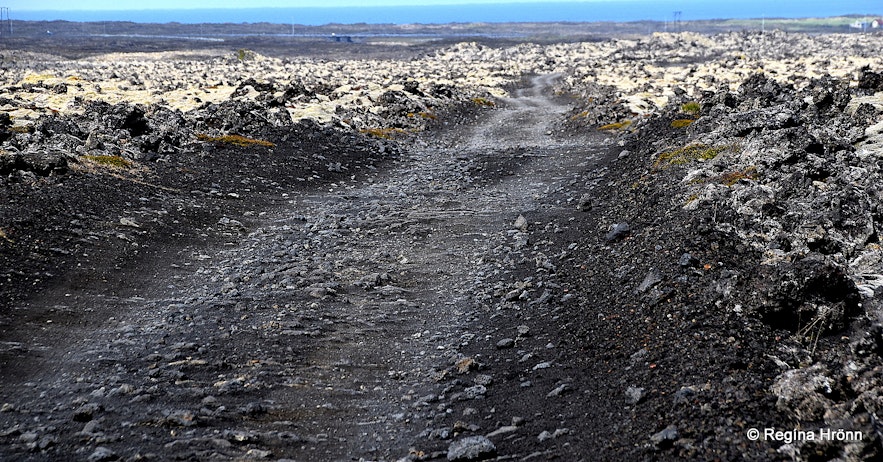 The road leading to Keilir and Lambafellsklofi rift

Remember that it is a bad and bumpy road and a summer visit only. To reach this area you can rent a car either in Reykjavík or when you arrive at Keflavík airport. You will need a 4x4 for this bumpy road.

There is so much more to see and do here on the Reykjanesskagi peninsula and parts of it are called the Blue Diamond Circle. I will soon be showing you that circle, but in the meanwhile, I have written a couple of travel-blogs about interesting sights on that circle: 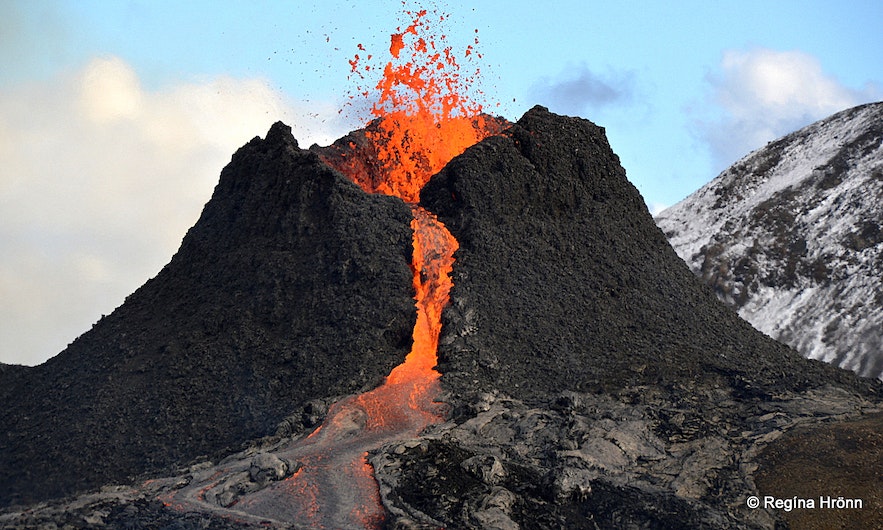 A volcanic eruption started in Mt. Fagradalsfjall and Geldingadalir in 2021

Have a lovely time exploring the beautiful Reykjanesskagi peninsula :)