The Annual Viking Festival in Hafnarfjörður Town in Iceland

Hafnarfjörður town, the neighbouring town of Reykjavík where I live, hosts the annual Viking Festival, which is the oldest and biggest festival of its kind in Iceland. Visiting this festival will make you feel like you have been transferred back in time a thousand years or so.

The festival, which has been held since 1995, takes place on the second weekend of June and lasts for 4 days! For me, this is the most fun time to be in Hafnarfjörður. I have photos from many Viking Festivals, but some of the photos in this travel-blog are from the festival in 2015 at the Viking Village.

The Viking Festival 2018 was held in another location, at Víðistaðatún park, where it all began, and which is a much bigger venue. 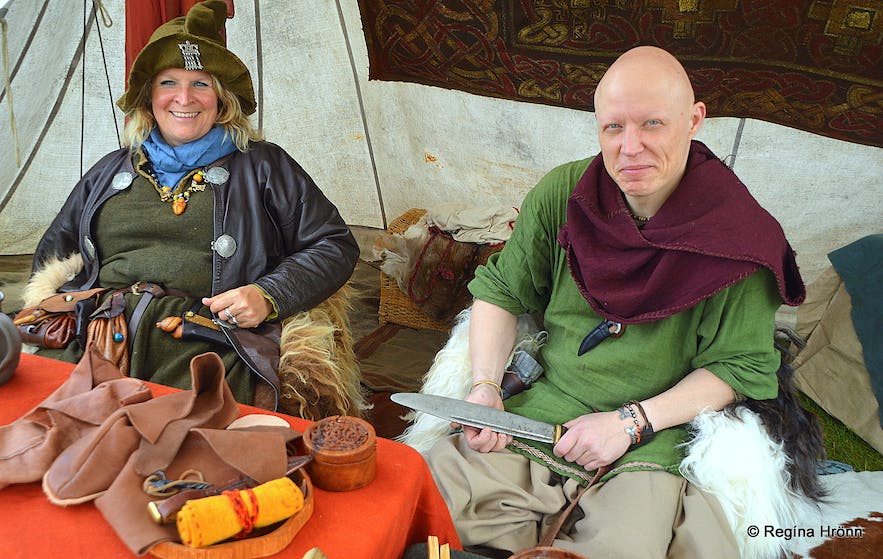 The Viking Village hosted the festival for many years, and a Middle Age market was set up in between and in front of the buildings of the Viking Village. The new location for the Viking festival is at Víðistaðatún park and the market is open from 13-19 with free entrance.

The Vikings sell their wares at the market;  leather goods, fur, silver jewellery, swords and exquisite horns made of bones. They roast a lamb, fight, dance, tell stories and show us the ways of living of the old Vikings. 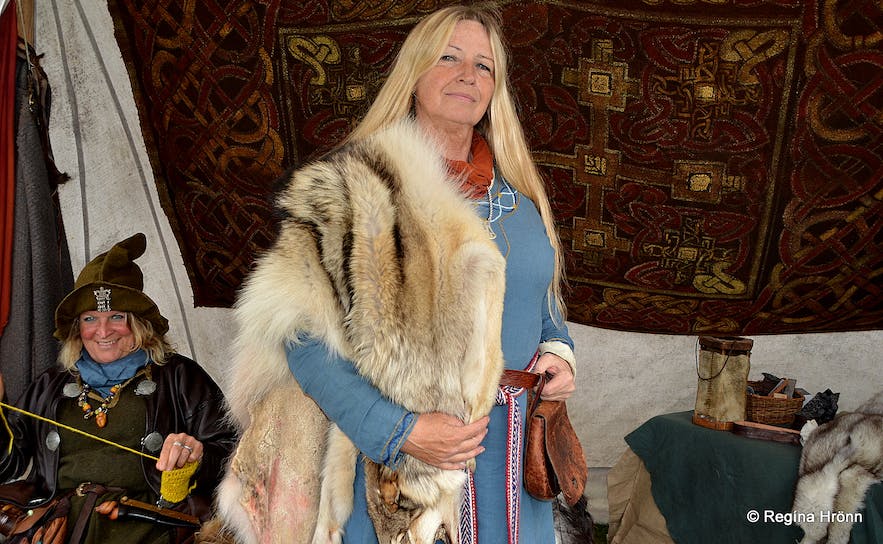 Crowds of Vikings from all over the world (mostly Scandinavia, England, and Germany, plus Icelanders of course) gather at Víðistaðatún park and the fun goes on for 4 days.

The Viking Festival is becoming more and more popular and it is estimated that some 250-300 Vikings took part in the festival in 2015. The major part of the Vikings come from Hafnarfjörður and a Viking club was founded in association with Fjörukráin at the Viking Village. 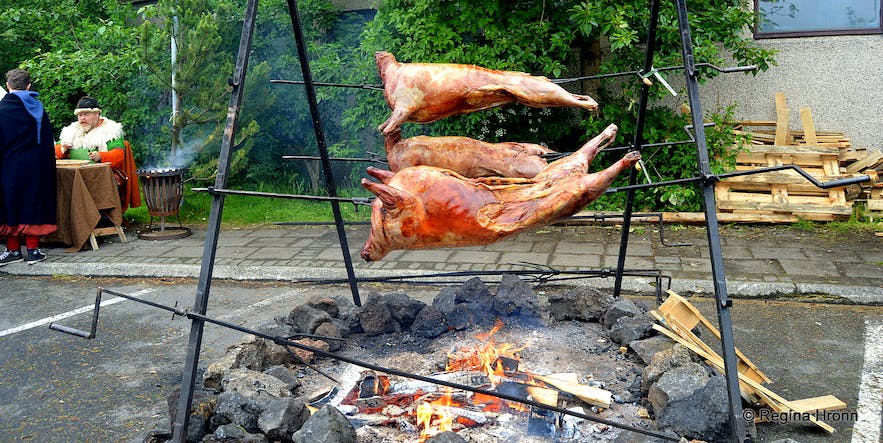 This Viking club is called Rimmugýgur, which is a name from the Saga of Njáll, the jewel of the crown of the Icelandic Sagas - the axe Rimmugýgur in that Saga means a fighting troll!

This biggest of all Icelandic Viking clubs has grown in size through the years with around 200 members today - around 60 of which partake in the Viking reenactment fights. You can read much more about Rimmugýgur in my travel-blog on Viking activities in Iceland today. 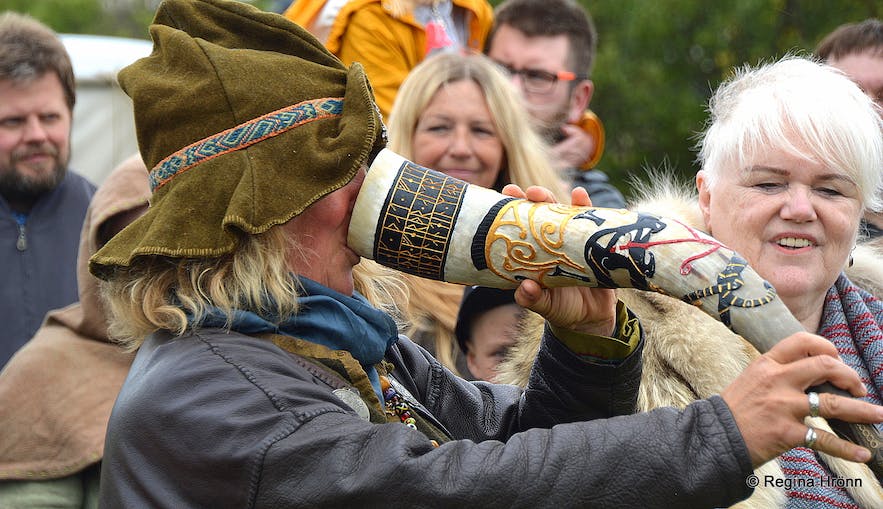 The Vikings at the Viking Festival teach us how to throw spears and axes, shoot with bows and arrows, there is wood-carving, etc, etc. And from time to time you can have your fortune told by a fortune teller in a tent at the market.

Iceland is the "Mekka" of Vikings and visiting the festival is a must if you are visiting Iceland on the second weekend of June. I make sure not to miss the Viking Festival.

With the Danish Gudrun at the Viking Festival in 2019

On the last day of the festival, on the 17th of June, Iceland celebrates its National Day, so imagine how much fun there is on that day in Hafnarfjörður town - Vikings and a local parade with festivities all over town! 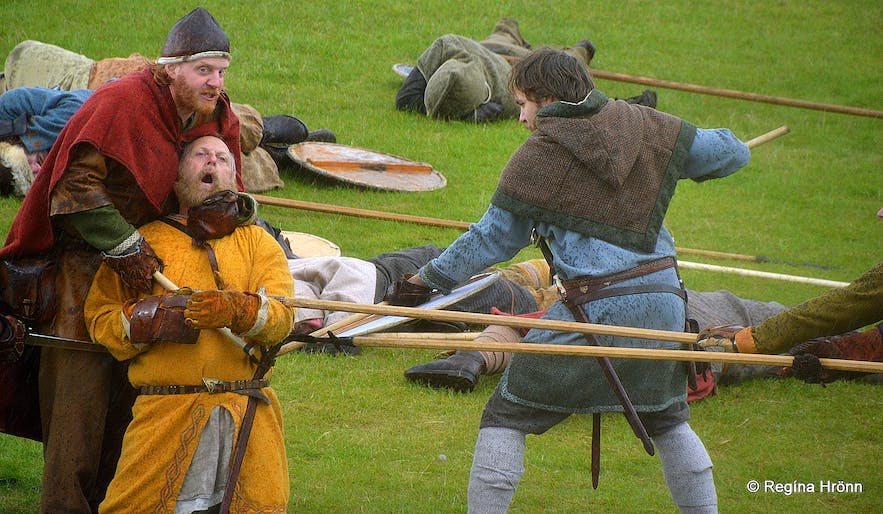 A Viking combat at the Viking Festival in 2018 - in heavy rain and hail! In 2019 we had such beautiful weather

The Viking market is open from 13-19 and after the Viking market closes the fun doesn't end, as that is when the Vikings start partying! There will probably be a Viking feast at the Fjörukráin restaurant at the Viking Village - and the fun will last until the wee hours of the morning with a concert and dancing - Viking style!

To me, the highlight of the festival is the Viking reenactment battles! The Vikings put on quite a realistic battle twice daily during the Viking Festival. Visitors are asked to keep their distance, as it can get scary. And I can tell you that the battles are quite realistic - minus the blood, of course. 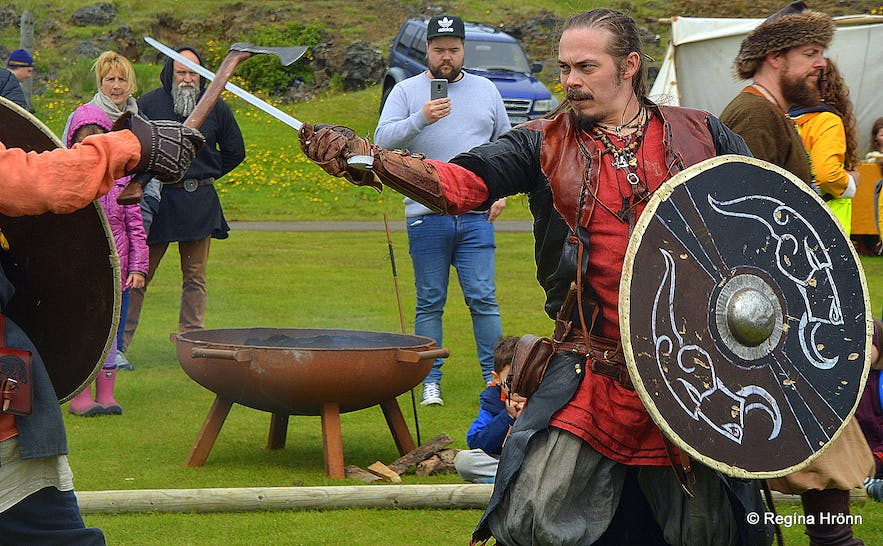 At the end of the battle, a lot of Vikings lie "dead" in the field, probably on their way to Valhalla, where they can continue fighting. Be aware that they then get up and run screaming towards the crowd!

It is all just for fun, but when I brought my nieces to watch the Viking battle, I held on to them when the Vikings ran screaming towards the crowd. If you look at the photo below I know you will understand why ;) But these Vikings have a heart of gold so there is nothing to worry about. And this is just a reenactment of a Viking battle. 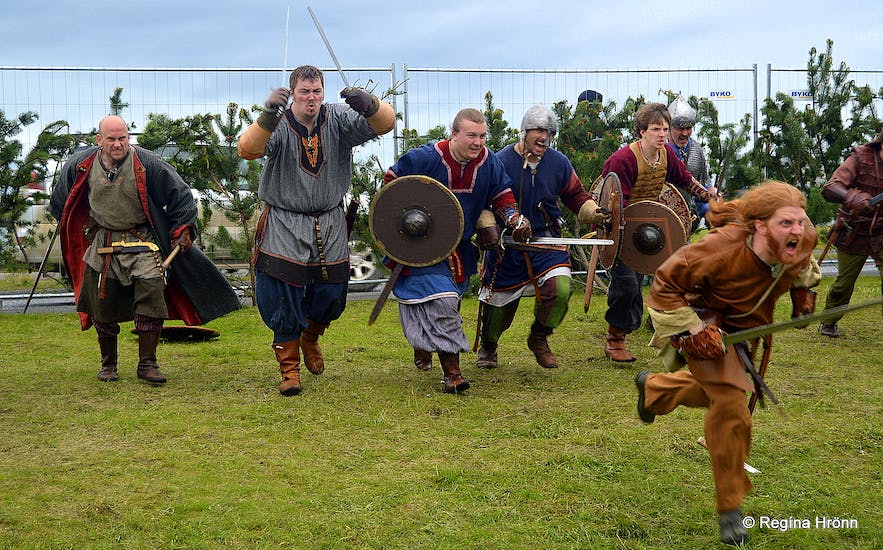 There are also different Viking battles, when the kids "fight", so the Viking Festival is also good fun for the kids. When I visited the Viking Festival on the first day of the festival at Víðistaðatún park it was crowded with kids, as you can see in some of my photos here.

They can take part in the Viking School for children, where the children f.ex. learn how to use Viking weapons and fight. Viking swords for children made of wood are sold at the Viking Festival. 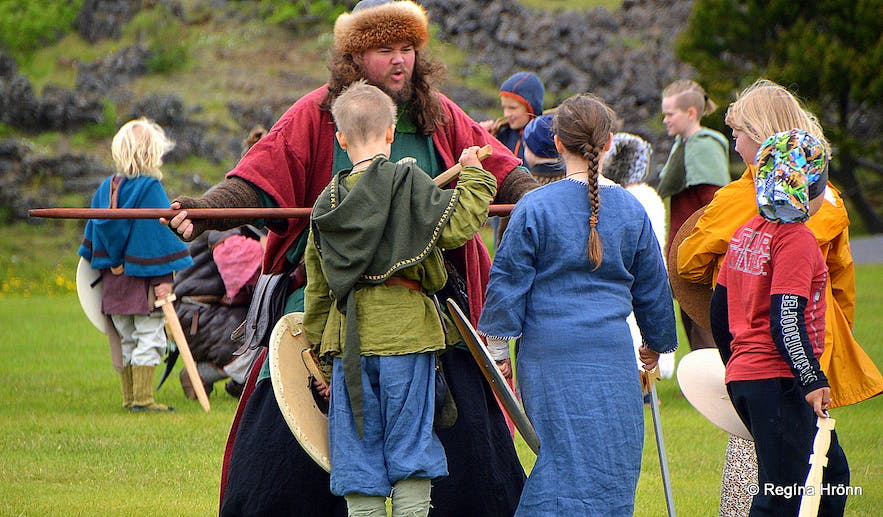 On the webpage of the Viking Village, I saw this lovely video of the Viking Festival, and they were kind enough to let me use it here on my travel-blog. It was shot by Netkynning - I just love the music they have added to the video! 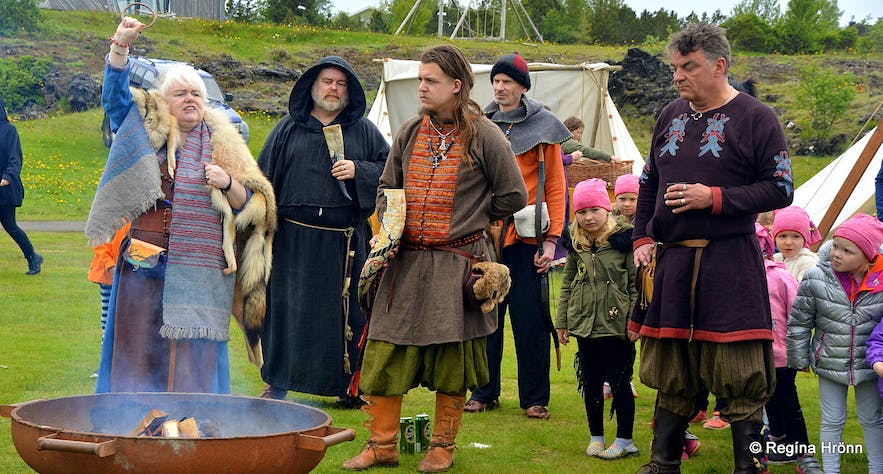 The Viking Festival is such good fun - don't miss it if you are visiting Iceland at this time, the second weekend of June. The last dates for the Viking Festival at Víðistaðatún park were Thursday 13th - Monday 17th June 2019. Open for visitors 13.00 - 19.00.

You can contact the Viking club Rimmugýgur for more information. 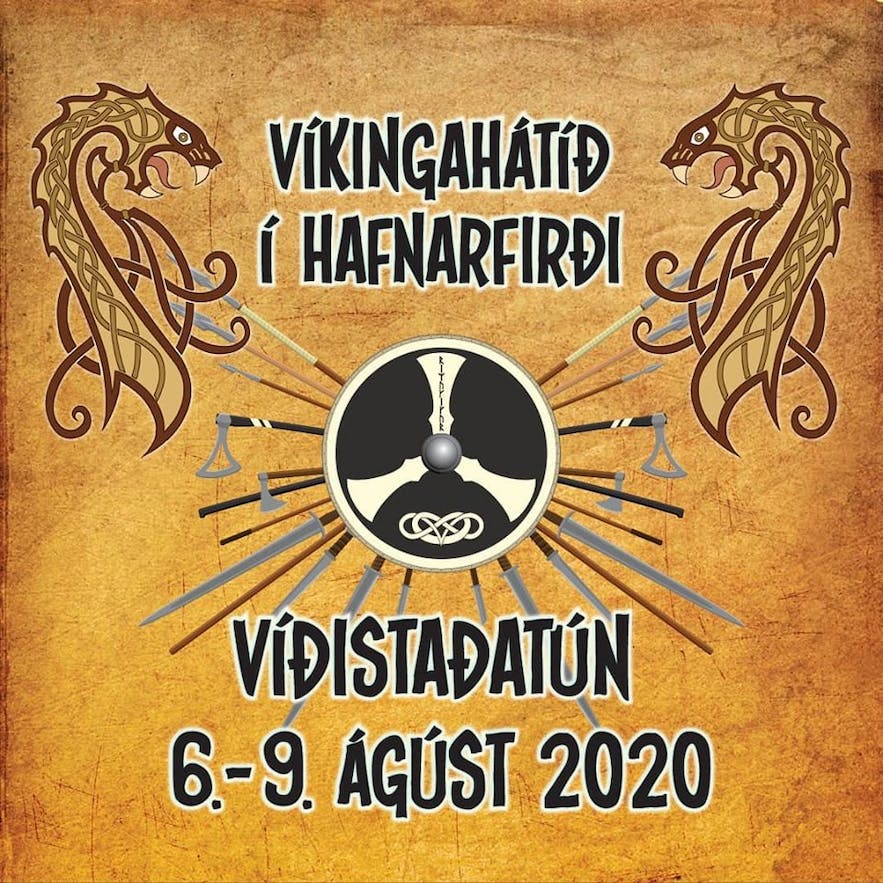 The sign for the Viking festival of 2020 as displayed on the Facebook page of Rimmugýgur - the June event was postponed until August and then cancelled as new restrictions were made due to a rise in Covid-19 in Iceland :(

The dates for the Viking market of 2020 were to be on the 16th of June until the 21st of June. Here is the Facebook event. But due to COVID-19, the Viking festival was postponed until the 6th-9th of August - only to be cancelled when a sudden rise in COVID cases took place :(

I have written another travel-blog about the Viking Village restaurant, Fjörukráin, and the hotel in the Viking Village, Hotel Viking. I am totally in love with this place and take all my foreign guests there :)

And, if you are interested in the Vikings, then I have written another travel-blog about Viking Ruins and Burial Mounds I have visited on my Travels in Iceland - which is a list of all the archaeological sites and burial mounds, which I have visited in Iceland. 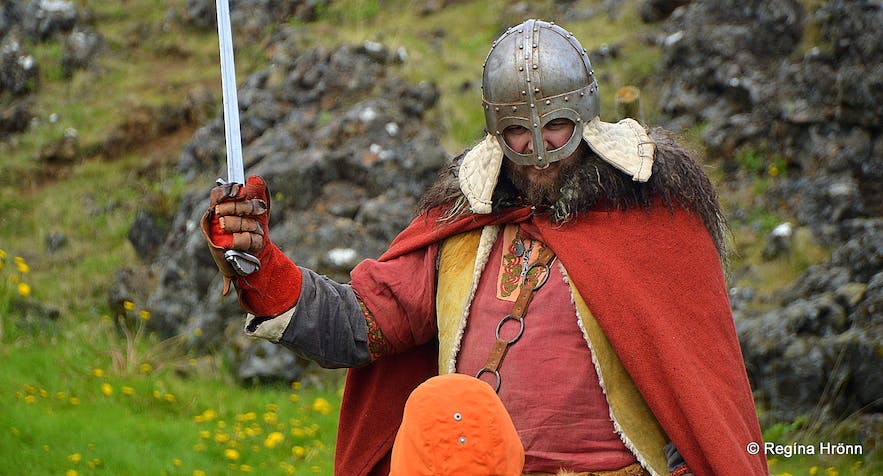 To visit Víðistaðatún from Reykjavík you can either take bus number 1 or rent a car in Reykjavík and drive there yourself.

While you are visiting Hafnarfjörður you might also want to join the Walking Tour of Hafnarfjordur | The Town of Elves, Vikings and Lava, as there is so much to see and do in the town in the lava, where elves reside.

Have fun at the Viking festival :)