Bárður discovered a pond close by, i.e. an explosive crater with a lake inside. He took a bath in the pond and liked it - it was so close to his farm that he used it as his bath, very convenient :) Since then it has been called Bárðarlaug pool. 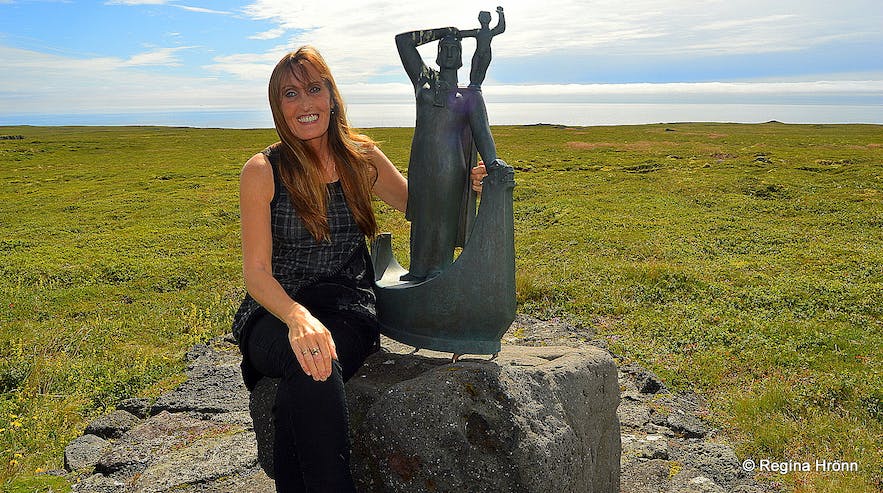 Bárður lived at Laugarbrekka until he disappeared into Snæfellsjökull glacier after the incidence at Rauðfeldsgjá, which I told you about in my travel-blog about Bárður.

Sigmundur Ketilsson, who had arrived in Iceland with Bárður, then lived at Laugarbrekka.

The homicidal Axlar-Björn, Iceland's only serial killer, was also executed at Laugarbrekka as this was the meeting place for the local assembly.

What I am going to tell you about in this travel-blog is the extraordinary woman, Guðríður Þorbjarnardóttir (980-1050), who was born in 980 here at Laugarbrekka at Hellnar. In her lifetime she went on 8 sea-voyages and travelled twice over the whole of Europe! She is believed to have been the most widely travelled woman of the Middle Ages.

There is only a very short drive down to a picnic area by a statue of Guðríður and her son aboard a Viking ship. The statue refers to Guðríður being the first Caucasian woman to bear a child, Snorri, in North-America. This small statue is a casting of a bigger statue made by Ásmundur Sveinsson, one of Iceland's best-known sculptors, and was unveiled by the President of Iceland in the year 2000. 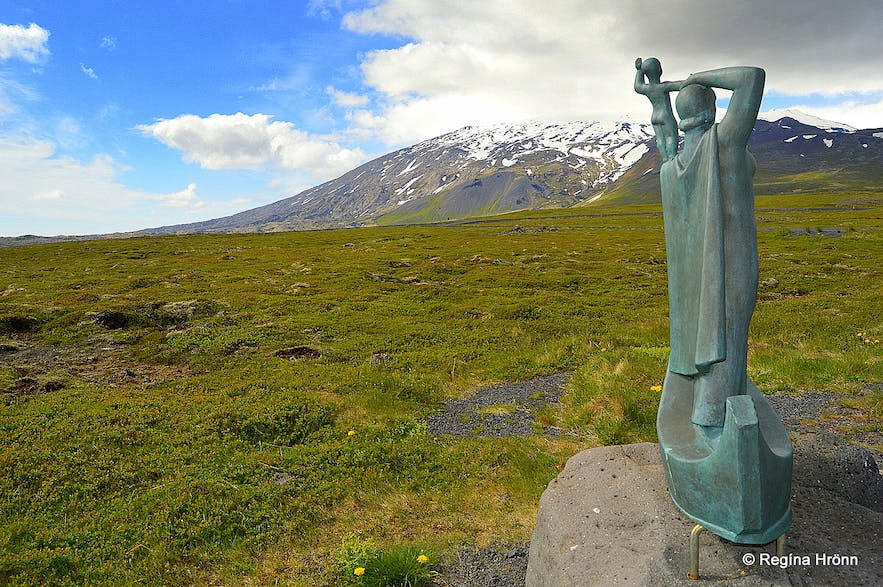 The original statue, which was made back in 1938 for the World Fair in New York, is the first statue made of a known Icelandic woman. It is called Fyrsta hvíta móðirin í Ameríku - the first European Mother in America. Here Guðríður is depicted as a strong, adventurous woman, which she for sure was.

Guðríður was the granddaughter of the settler Sigmundur Ketilsson, and the daughter of the Chieftain Þorbjörn. Guðríður travelled in the year 1000 from Iceland to Greenland with her parents, where Eiríkur rauði - Erik the Red had settled. 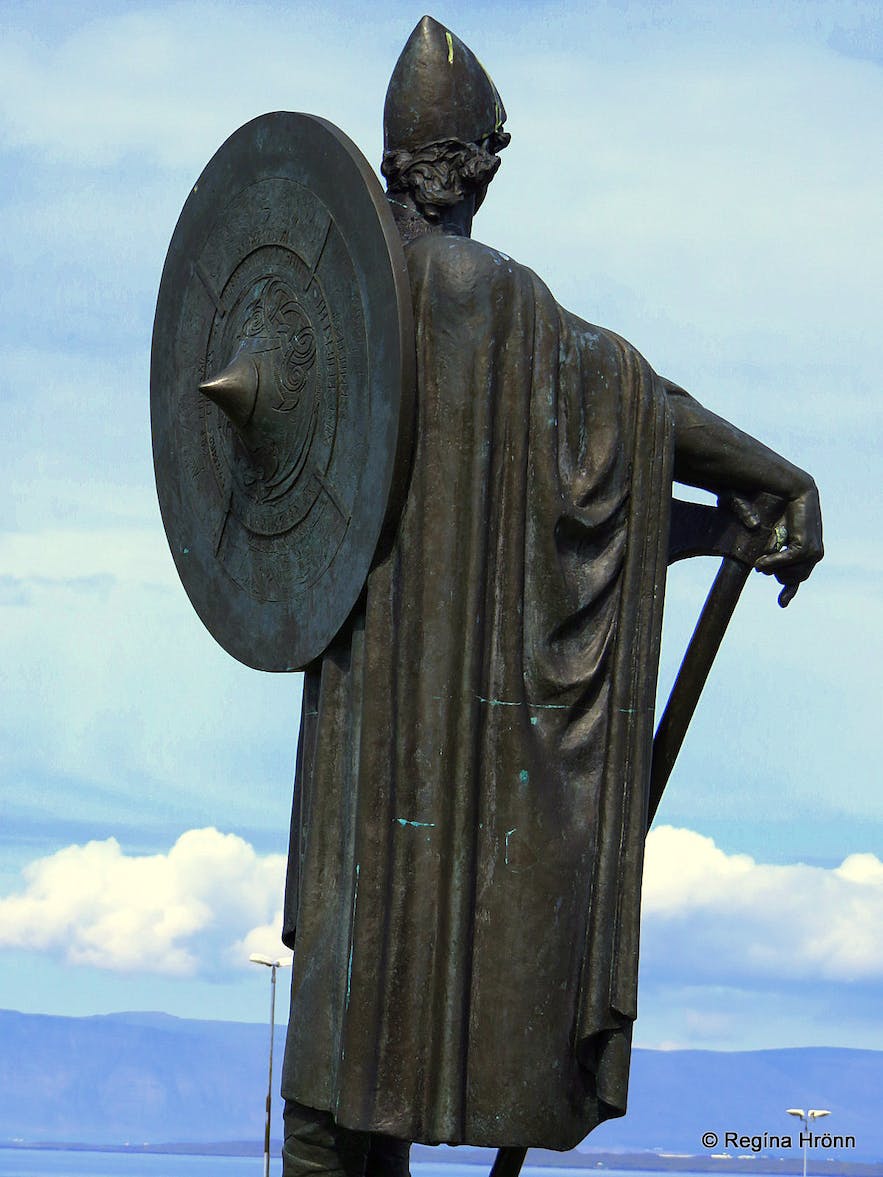 From Greenland Guðríður and Þorsteinn sailed to North-America with a group of Icelanders/Greenlanders, or whatever they called themselves back then.  Their story is told in two of our Sagas - Grænlendingasaga - the Saga of the Greenlanders and Eiríks saga rauða - the Saga of Erik the Red, but these two sagas are referred to as the Vínland Sagas.

Þorsteinn fell ill with the plague and died on the sea-journey to Vínland, so Guðríður went back and married her third husband, Þorfinnur karlsefni, the foster brother of Leif the Lucky. 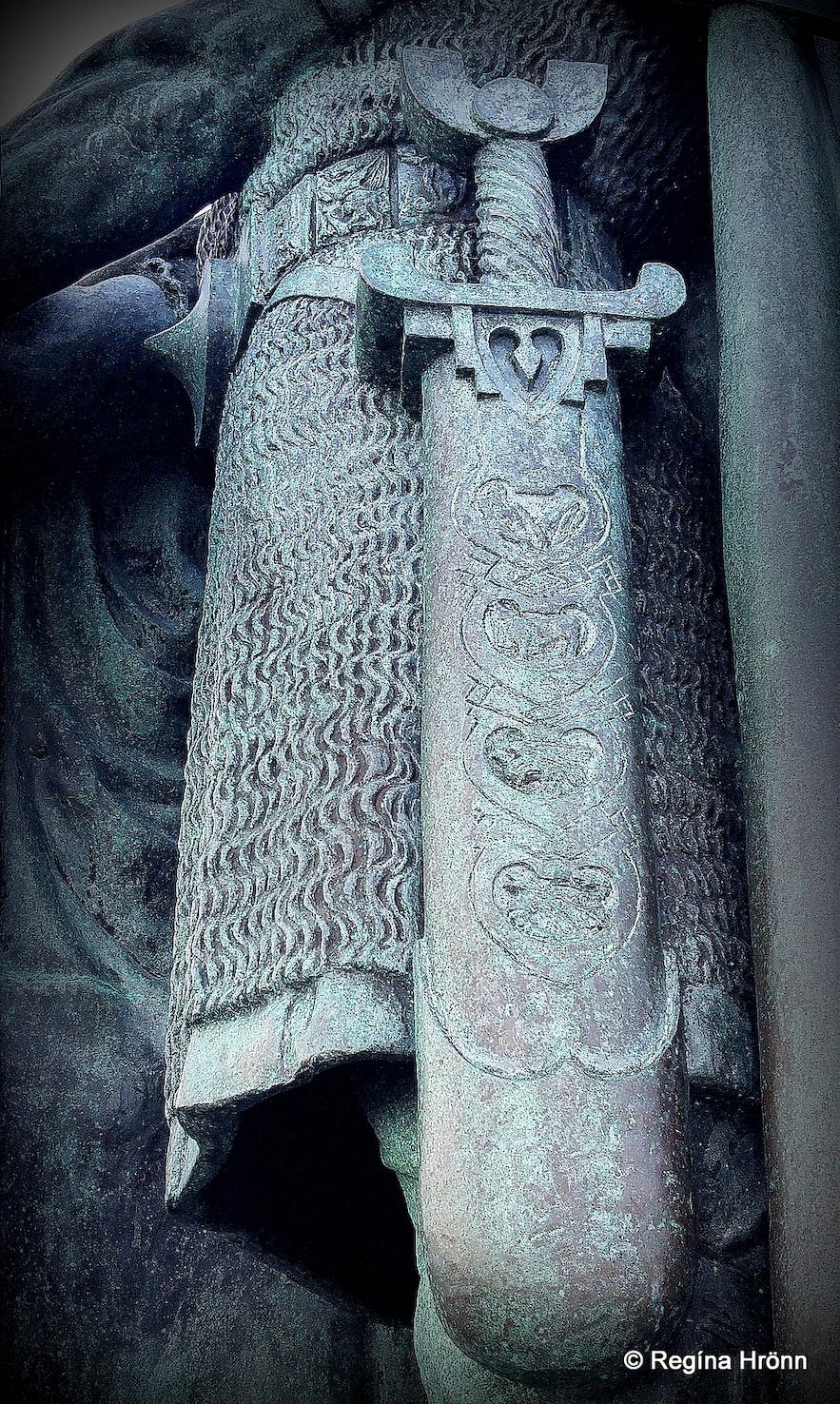 You will find Þorfinnur's statue in front of Hrafnista and Laugarásbíó cinema in Reykjavík. With him, she went back to America where their son, Snorri, was born, the first Caucasian child born in America.

They returned to Greenland after not getting along with the Indians, and from there they sailed to Norway and finally settled in Iceland, at the historical Glaumbær in Skagafjörður up north, where you can see a beautiful turf house, which is now a museum. 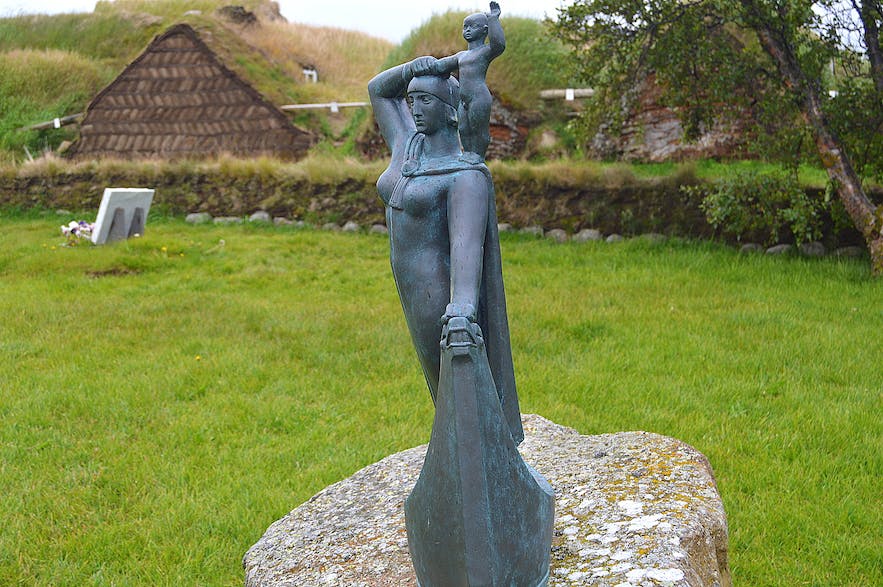 There is another replica of the original statue of Guðríður and her son at Glaumbær as you can see in my photo above.

After the death of Þorfinnur karlsefni, her third husband, Guðríður travelled to Europe on a pilgrimage and walked to the Vatican in Rome. Later she returned to Iceland and lived as a nun at Glaumbær, where her son, Snorri lived.

She was the most widely-travelled woman in Iceland from the 10th century until the 20th century and it is believed that she was only around fifty by now. What an adventurous life this extraordinary Icelandic woman lived! 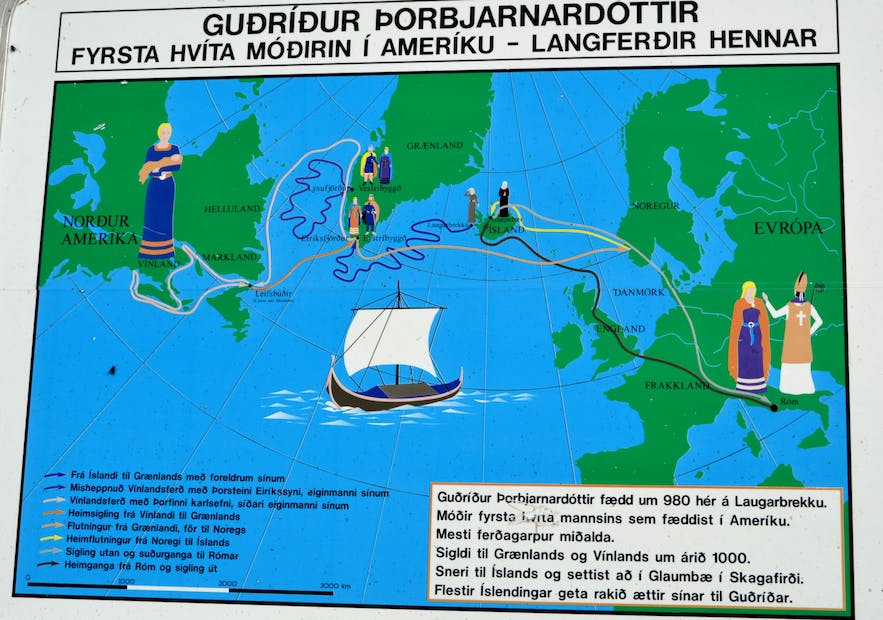 You can see how widely Guðríður travelled on the map below, which you can find by the parking lot at Laugarbrekka.

Guðríður is my ancestress 26 generations back :)

At Laugarbrekka were a farm and a church until 1881. Further down you will find the remains of the farm and the church. That area is declared as protected and you will see a yellow sign with Fornleifar written on it, meaning antiquities.

To visit this area you can rent a car in Reykjavík and drive up there in a couple of hours. If you want to read up on  the Magical Snæfellsnes Peninsula then I have written an I-V part travel-blog series about what there is to see and do on the peninsula.

The historical Laugarbrekka is located on the south side of the Snæfellsnes peninsula  by the road Útnesvegur number 574.