Bárður lived at Laugarbrekka until he disappeared into Snæfellsjökull glacier after the incident at Rauðfeldsgjá, which I told you about in my travel-blog about Bárður. 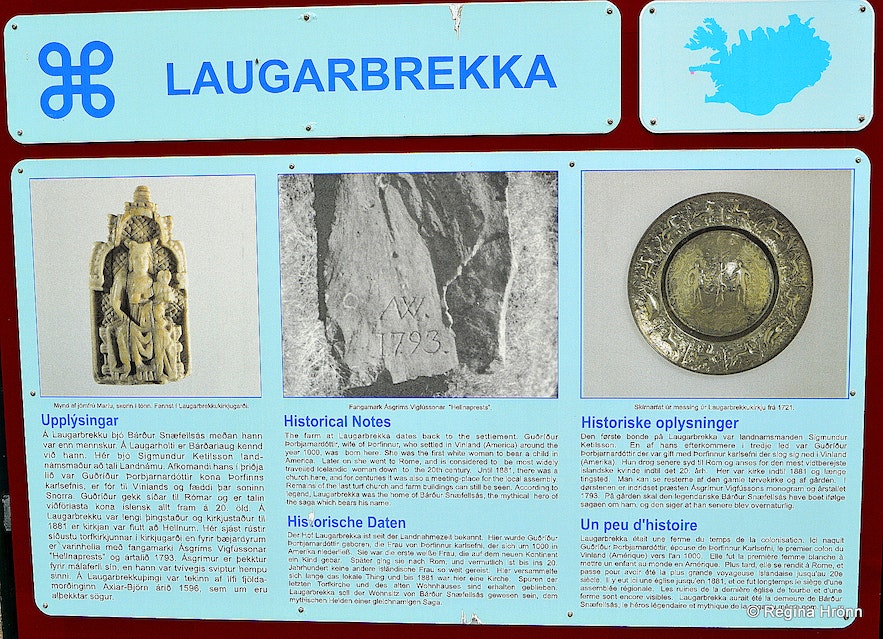 Sigmundur Ketilsson, who had arrived in Iceland with Bárður, then lived at Laugarbrekka.

What I am going to tell you about in this travel-blog though, is not a story about a man, but an extraordinary woman, Guðríður Þorbjarnardóttir (980-1050), who was born in 980 here at Laugarbrekka at Hellnar.

Guðríður was the great-granddaughter of the settler Sigmundur Ketilsson and the daughter of Chieftain Þorbjörn Vífilsson and Hallveig Einarsdóttir at Laugarbrekka. By the statue of Guðríður Þorbjarnardóttir and Snorri her son

In her lifetime Guðríður went on 8 sea voyages and travelled twice over the whole of Europe! She is believed to have been the most widely travelled woman of the Middle Ages.

And she went to America long before Cristopher Columbus "discovered" it and she is most likely the first European woman to bear a child, a son by the name of Snorri, in North America.

At Laugarbrekka you will find a statue of Guðríður Þorbjarnardóttir with her son, Snorri, aboard a Viking ship. 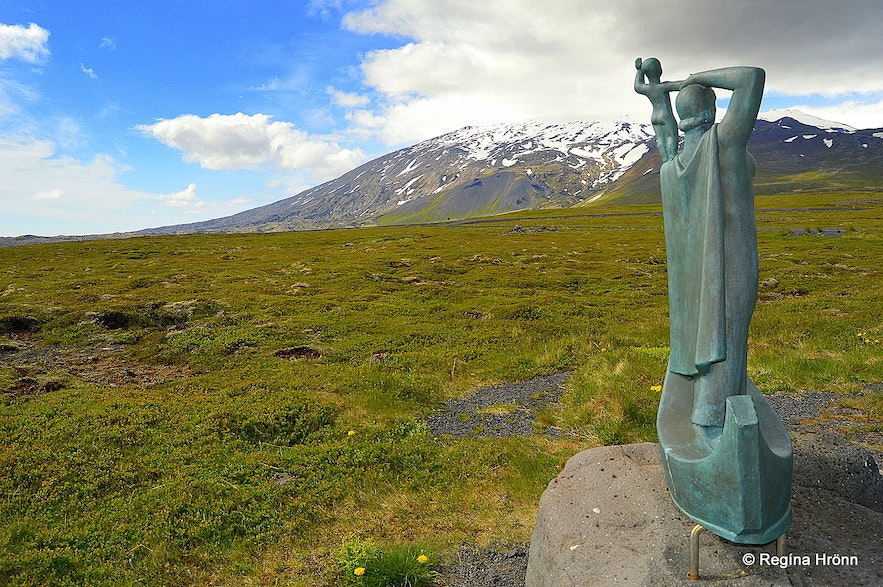 The statue of Guðríður and Snæfellsjökull glacier

Their story of Guðríður Þorbjarnardóttir is told in two of our Sagas - Grænlendingasaga - the Saga of the Greenlanders and Eiríks saga rauða - the Saga of Erik the Red, but these two sagas are referred to as the Vínland Sagas.

In the Saga of Erik the Red Guðríður Þorbjarnardóttir is described as being "the fairest of women, and of peerless nobility in all her conduct".

She became the foster child of Ormur and Halldís at Arnarstapi, who were great friends of her fathers and lived at Arnarstapi for a long time. Back in those days, it was a great act of friendship to foster a child of a friend. 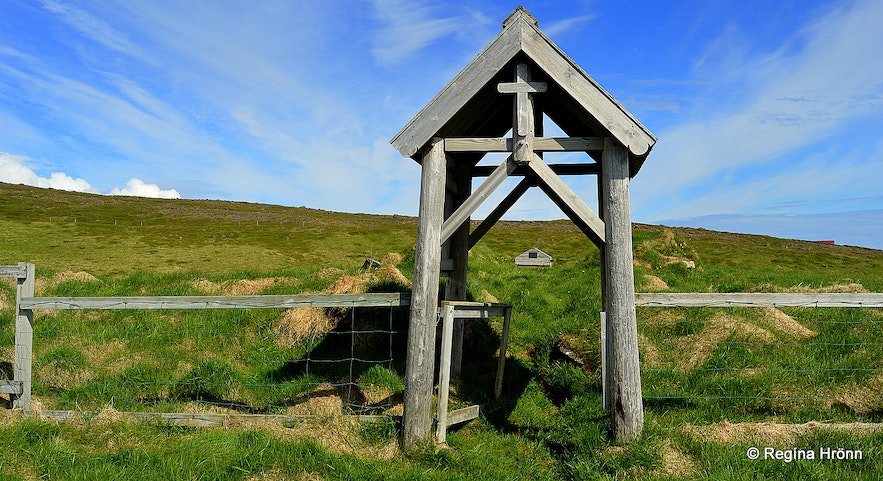 Guðríður travelled in the year 1000 from Iceland to Greenland with her parents, where Eiríkur rauði - Erik the Red had settled. They stayed for the first winter with a man called Þorkell at Herjólfsnes, who was the greatest of the farmers in this area.

Times were hard and famine in Greenland when Guðríður arrived with her family. In Greenland lived a seeress, Þorbjörg lítilvölva. She was the only one left of 9 sisters, who all had this ability, to predict the future.

Þorbjörg was invited to the home of Þorkell to predict the future and to foretell when this hardship would end. Þorbjörg was held in high esteem and a high seat was prepared for her. She needed women who knew the lore needed for the exercise of the enchantments - the Weird-songs (Varðlokur). 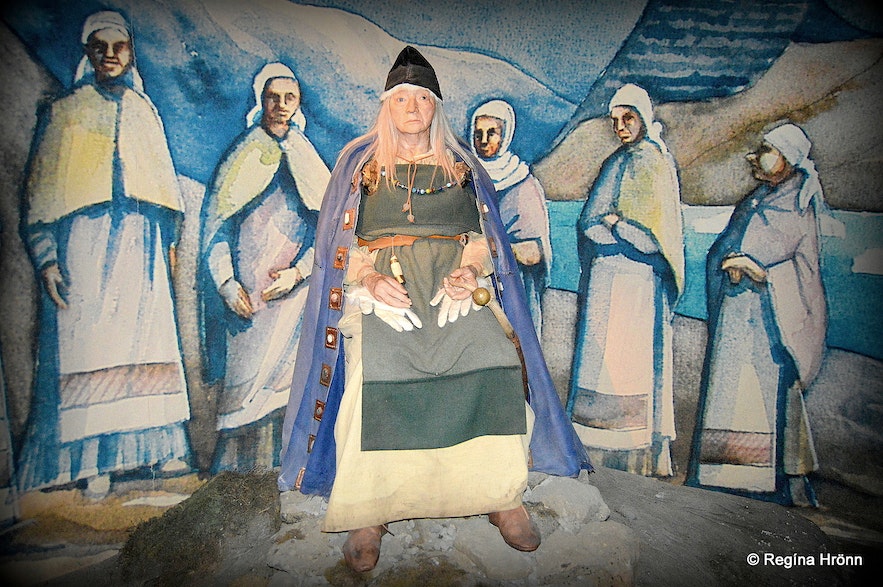 When nobody came forward Guðríður answered:  "I am not skilled in deep learning, nor am I a wise woman, although Halldis, my foster mother, taught me, in Iceland, the lore which she called Weird-songs."  "That lore and the ceremony are of such a kind, that I purpose to be of no assistance therein because I am a Christian woman."

This is what is written in Eiríks saga about this event (it was translated into English in 1880 by J. Sephton from the original Icelandic Eiríks saga rauða, but Grænlendingasaga is not available online in English).

Both Þorbjörg lítilvölva and Þorkell begged Guðríður to consent to doing this. Guðríður finally agreed and so beautifully sang the weird song that people had never before heard it sung so beautifully. 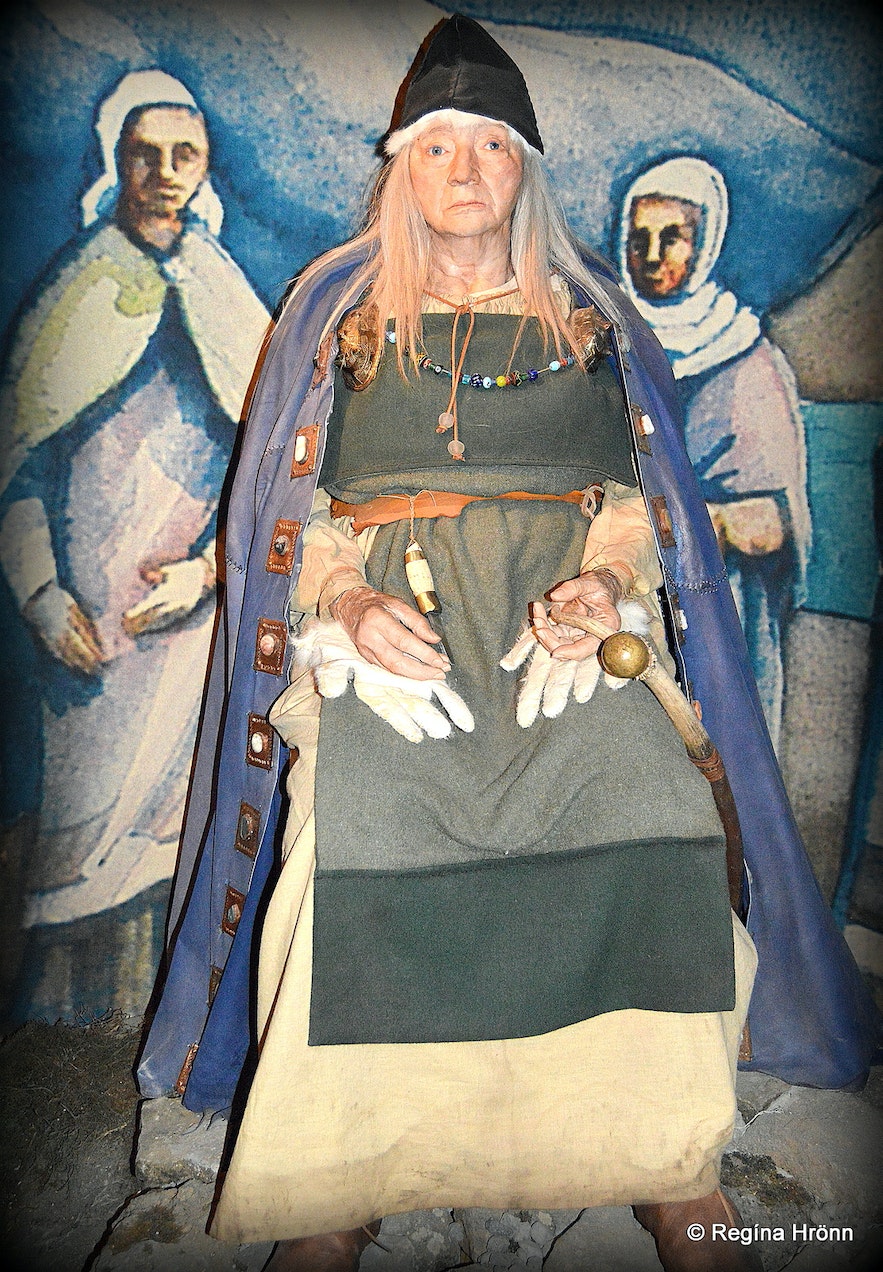 The seeress foretold that the hardship would end next spring. This is what she saw in Guðríður's destiny:

"And thee, Gudrid, will I recompense straightway, for that aid of thine which has stood us in good stead; because thy destiny is now clear to me, and foreseen.

Thou shalt make a match here in Greenland, a most honourable one, though it will not be a long-lived one for thee, because thy way lies out to Iceland; and there, shall arise from thee a line of descendants both numerous and goodly, and over the branches of thy family shall shine a bright ray. And so fare thee now well and happily, my daughter"." (As written in Eiríks saga). 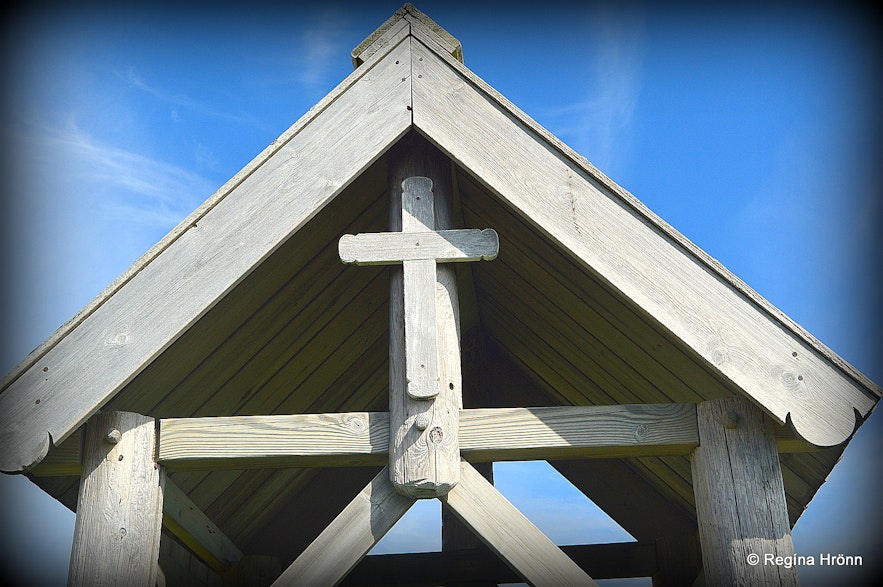 Guðríður married three times and her first husband was Þórir austmaður, who died in Greenland.

The 2 sagas tell us that on his way back to Greenland from Vínland, Leif the lucky rescued Þórir austmaður and Guðríður Þorbjarnardóttir from a reef and took them to Greenland (15 men in all he rescued).

This is how Leifur got his nickname the lucky.

According to the Eiríks saga Leif the Lucky discovered Vínland by pure luck when he was on his way to Greenland from Norway to become a missionary in Greenland by the orders of the Norwegian King Olav Tryggvason. The Grænlendinga saga tells it differently. 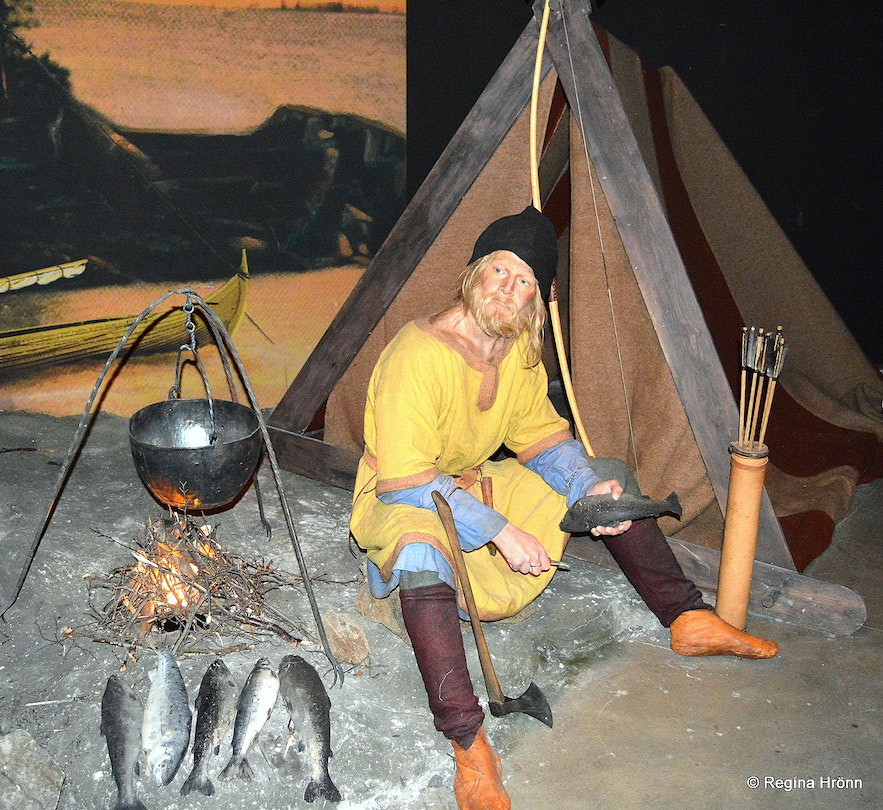 Leifur Eiríksson as depicted at the excellent Saga Museum in Reykjavík

In that saga, Leifur wanted to find the land that Bjarni Herjólfsson had seen earlier from his ship when he was blown off course by a storm. So he bought the ship from Bjarni and set off to find this land with 35 men.

They explored this land and went back to Greenland.

You will find a wax statue of Leifur at the Saga Museum in Reykjavík, and a frightening wax statue of his pregnant half-sister, Freydís, which is a reconstruction of a terrible event that took place in the Vinland Sagas later on. 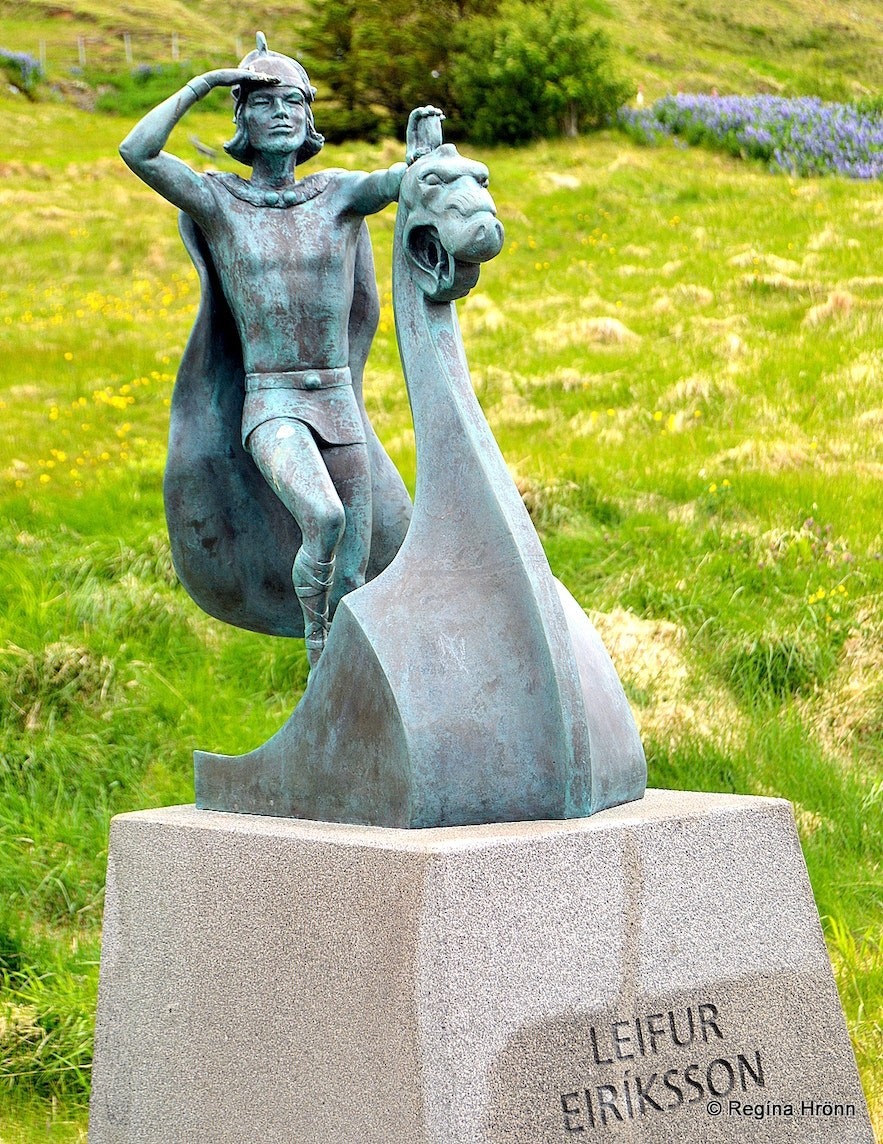 Now, back to Guðríður. Her second husband was Þorsteinn, the son of Erik the Red and the brother of Leif the Lucky. 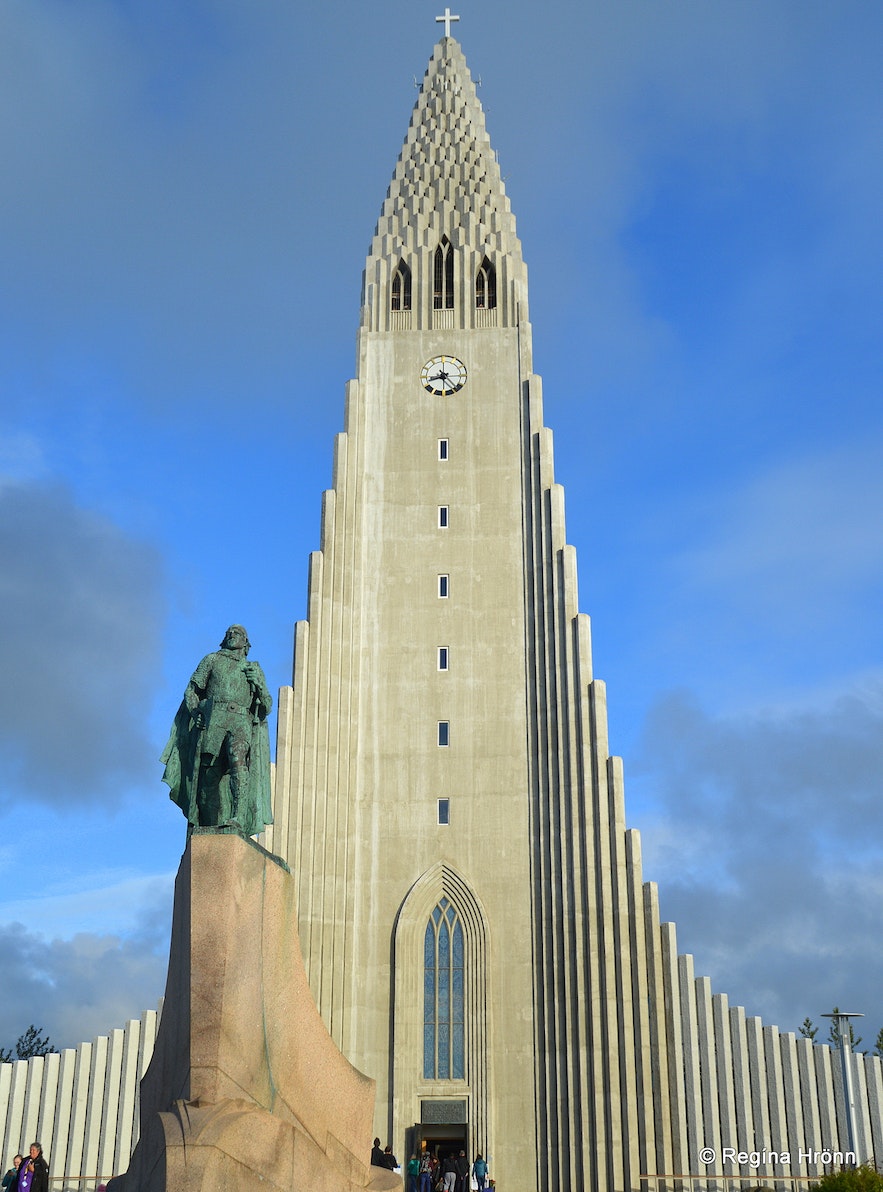 The statue of Leifur in front of Hallgrímskirkja church in Reykjavík

These 2 Sagas tell a different story, but Grænlendingasaga tells us that Þorsteinn fell ill and died after they had got lost searching for Vínland.

I am just telling you the main events here, but the story about Þorsteinn's death as told in Grænlendingasaga is fairly graphic. Þorsteinn sat up after his death and told Guðríður details about how her life was going to turn out. 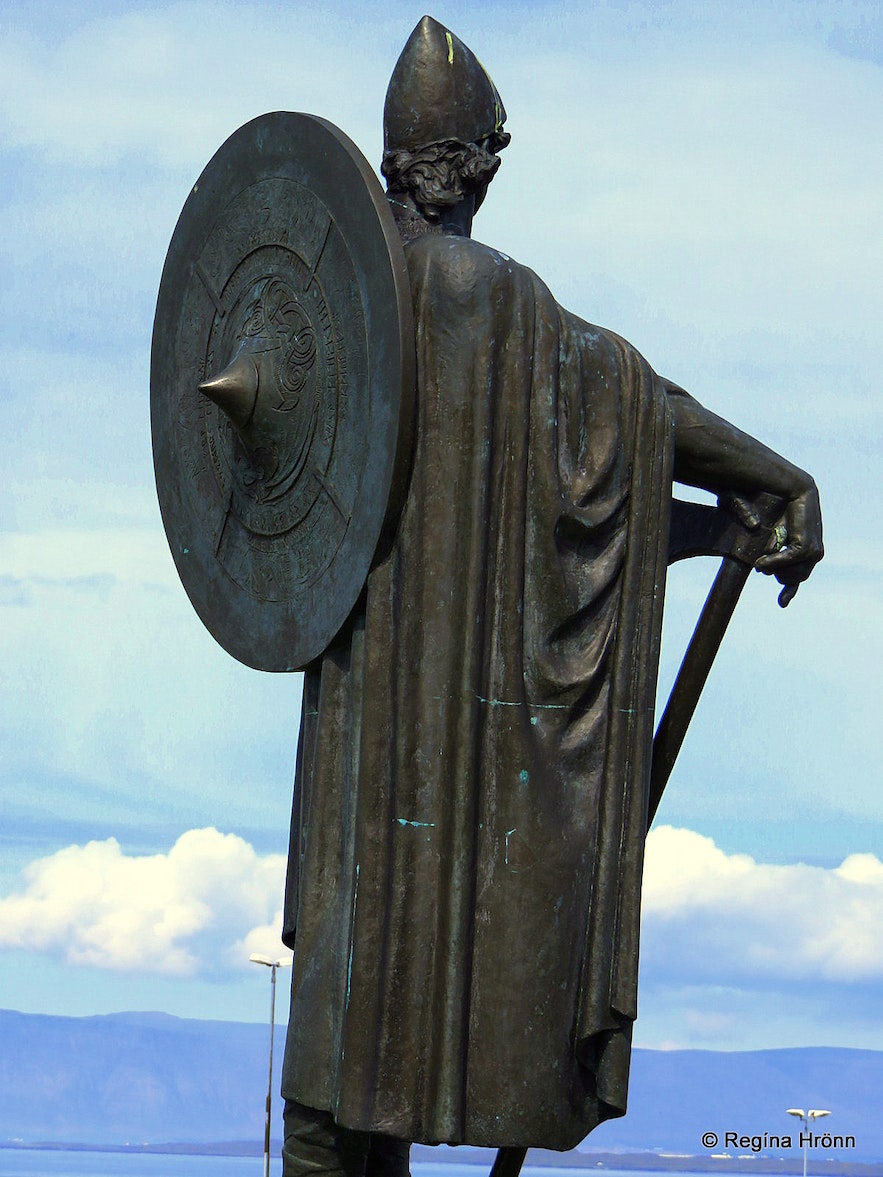 A statue of Þorfinnur karlsefni in Reykjavík, Guðríður's third husband

Guðríður married her third husband, Þorfinnur karlsefni Þórðarson, in Greenland, and sailed to America with a large group of people (60 men and 5 women). They brought with them livestock as they wanted to settle in this new land.

You will find Þorfinnur's statue in front of Hrafnista and Laugarásbíó cinema in Reykjavík. With him, she sailed to America where their son, Snorri, was born, most likely the first European child to be born in America.

They seem to have explored America all the way south to Long Island. 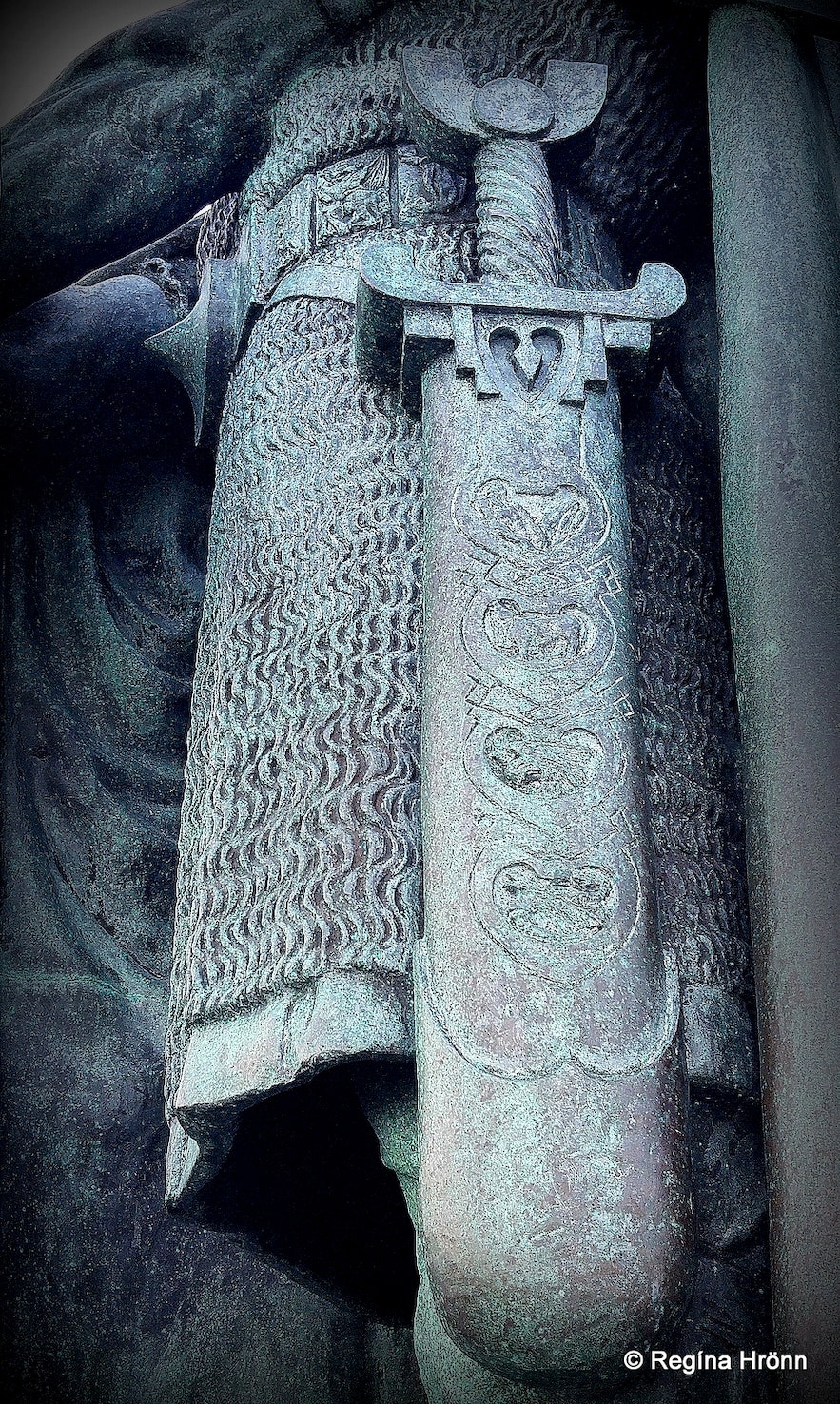 They stayed in Leifsbúðir, the houses that Leifur the lucky had built earlier on. They didn't lack food when they arrived as a whale had beached where they settled. They hunted and fished, and had plenty of grapes to eat.

They traded with the locals, who wanted weapons and red cloth for their furrier goods, but Þorfinnur didn't want to sell them weapons. He told the women to offer milk (products) to the locals instead, which they happily accepted.

(There are now speculations about whether the Native Americans could actually have digested that milk. If not they might have thought that they had been poisoned by the white men, but now we are just speculating.) 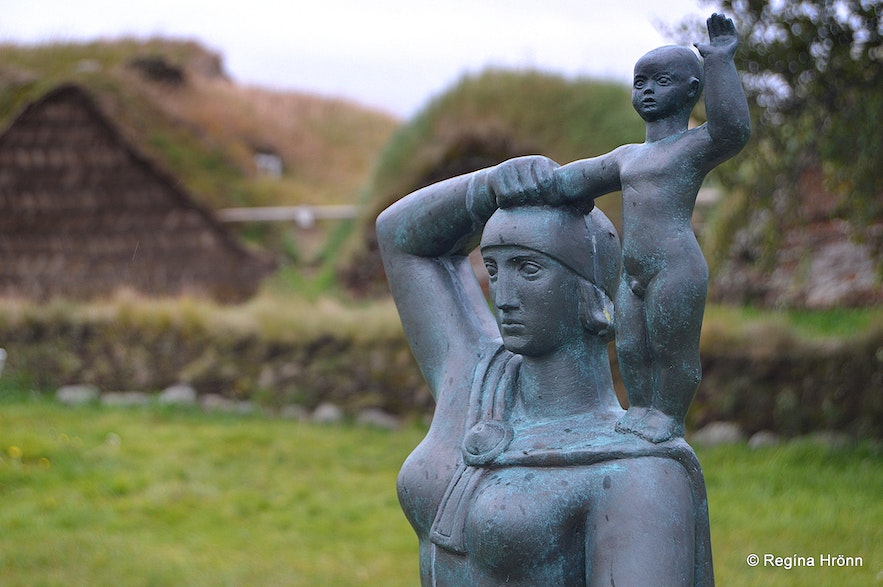 The same thing happened the following year, but now the locals were greater in number than the previous year.

The women were told to give them milk (products) and the Native Americans threw their bundles with fur over the stockade, which they had built around the farm. 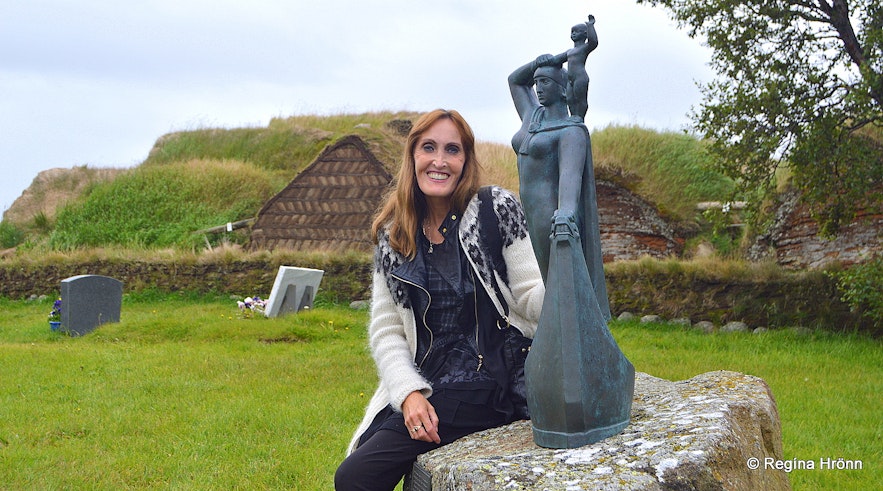 Guðríður Þ. gave the woman a sign to sit by her, but then a loud crack was heard and the woman disappeared. At the same moment, one of the locals entered their home in search of weapons and was killed by Þorfinnur's men.

A battle followed between the Icelanders/Greenlanders and the locals and many men were killed.

They stayed in Vínland for the winter but understood that they were no longer safe there, so they returned back to Greenland when Snorri was 3 years old. They carried with them furrier goods, vine, and grapes.

The two sagas tell the story very differently, so it is difficult to recapitulate, so bear with me ;)

From Greenland, they sailed to Norway and finally settled in Iceland, at the historic Glaumbær in Skagafjörður up north, where you can see a beautiful turf farm, which is now a museum.

After the death of Þorfinnur karlsefni, her third husband, and the marriage of her son, Snorri, Guðríður travelled to Europe on a pilgrimage and walked to the Vatican in Rome. 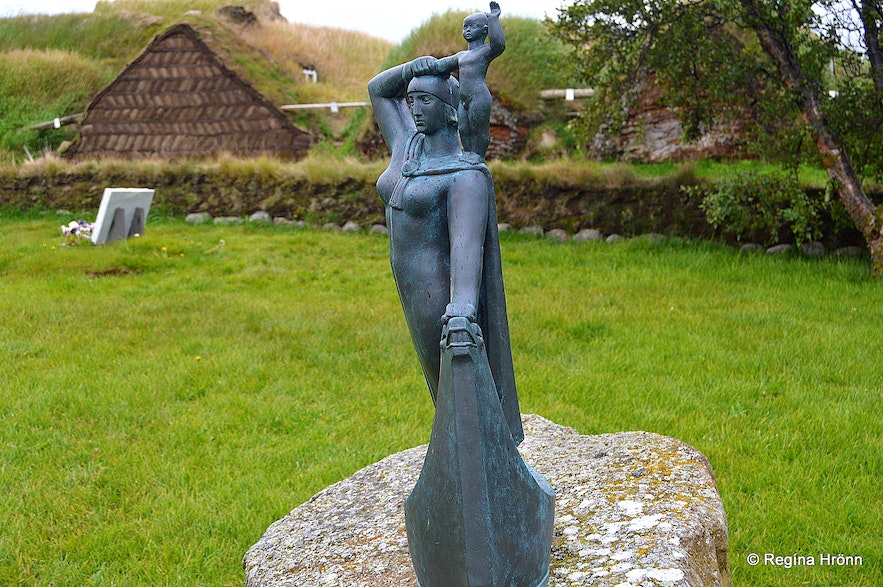 Later she returned to Iceland and lived as a nun at Glaumbær, where her son, Snorri lived. He had built a church at Glaumbær.

Guðríður Þorbjarnardóttir was the most widely-travelled woman in Iceland from the 10th century until the 20th century and it is believed that she was only around fifty by now. What an adventurous life this extraordinary Icelandic woman lived! 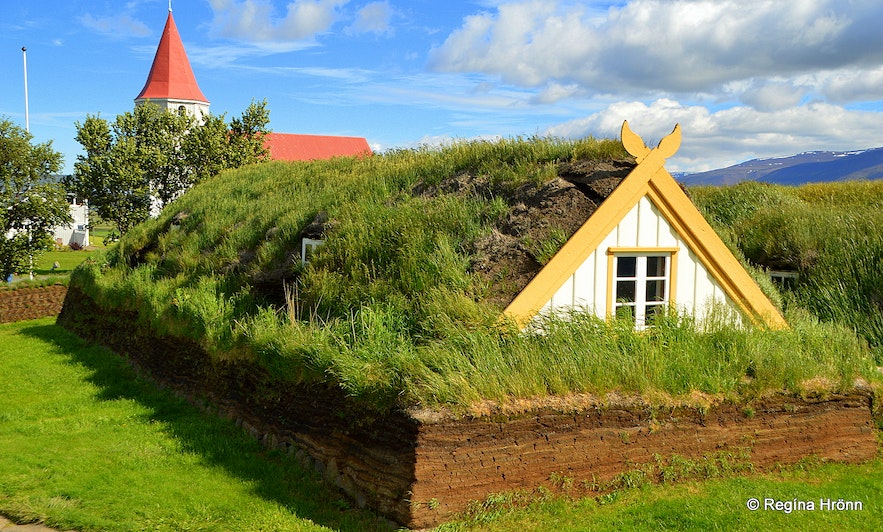 There is only a very short drive down from the main road to a picnic area at Laugarbrekka in Snæfellsnes by a statue of Guðríður and her son aboard a Viking ship.

You can see how widely Guðríður travelled on the map below, which you can find by the parking at Laugarbrekka. 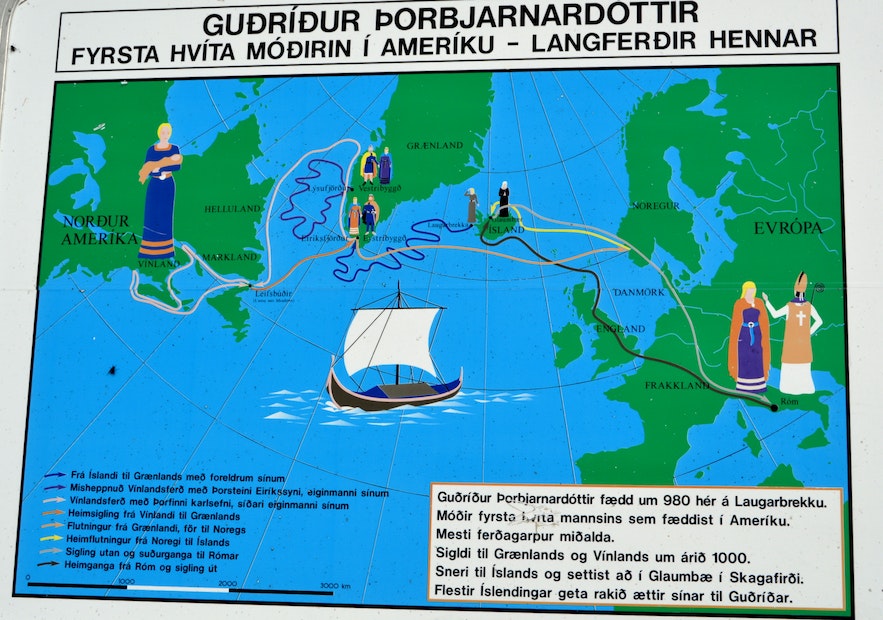 This small statue is a casting of a bigger statue made by Ásmundur Sveinsson, one of Iceland's best-known sculptors, and was unveiled by the President of Iceland in the year 2000.

The original statue, which was made back in 1938 for the 1939 World Fair in New York, is the first statue made of a known Icelandic woman.

Here Guðríður is depicted as a strong, adventurous woman, which she was for sure.

In April 2022 this beautiful statue got stolen and returned again a couple of days later.

At Laugarbrekka there was a farm and a church until 1881. Further down you will find the remains of the farm and the church.

That area is declared protected and you will see a yellow sign with Fornleifar written on it, meaning protected antiquities.

If you want to read up on the Magical Snæfellsnes Peninsula then I have written an I-V part travel-blog series about what there is to see and do on the peninsula. 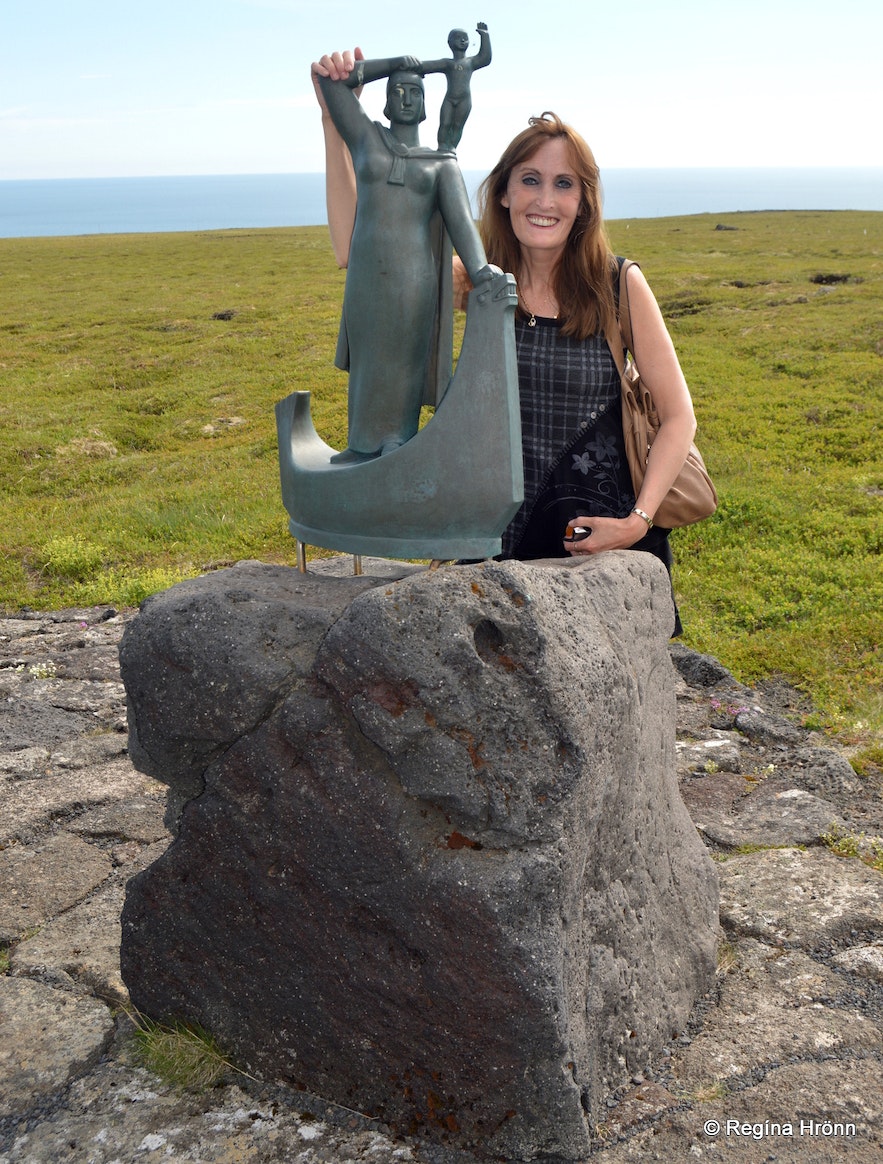 Guðríður is my ancestress 26 generations back

The historic Laugarbrekka is located on the south side of the Snæfellsnes peninsula by the road Útnesvegur number 574. Here you can see the exact location of Laugarbrekka on Google maps.

To visit this area you can rent a car in Reykjavík and drive up to Laugarbrekka in a couple of hours.

The Saga of Erik the Red