I want to show you a beautiful area in South-Iceland called Fljótshlíð. It is a Viking area and the scene of the Saga of Njáll, which is sometimes referred to as the Queen of the Icelandic Sagas. You will maybe notice a sign as you enter Fljótshlíð, on which is written "Á Njáluslóðum" - meaning that you are now entering the region of the Saga of Njáll.

The Saga of Njáll is one of the best known of the Sagas. It took place around the millennium of 1000 in the Rangárþing region. It tells the story of the friends, Gunnar at Hlíðarendi and Njáll of Bergþórshvoll. 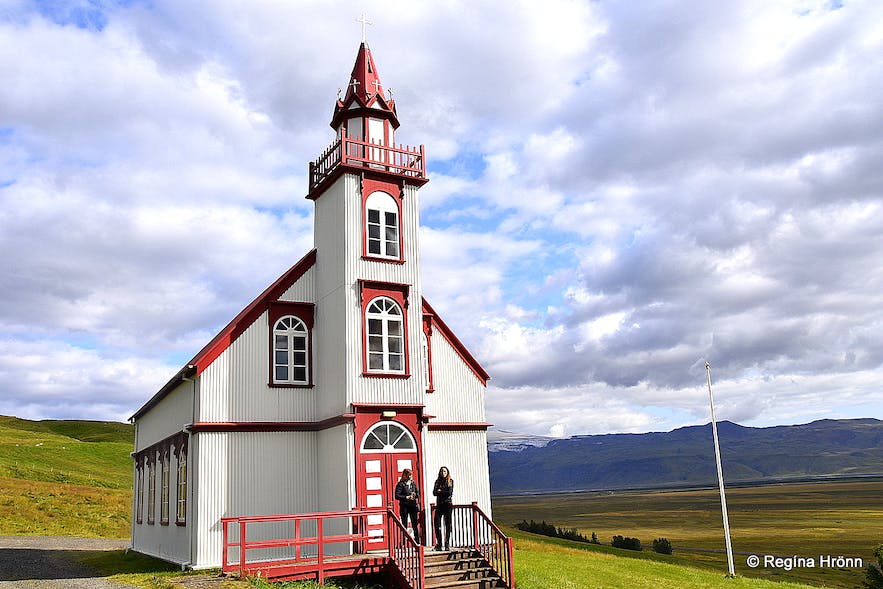 At Hlíðarendi you will find a beautiful church, but nothing to remind us that here lived one of the great warriors of the Sagas, apart from the information sign.

Gunnar at Hlíðarendi loved this area

Gunnar was killed at Hlíðarendi and buried in a grave-mound there. Rather than leaving Iceland as an outlaw, he chose to stay in Iceland and die in an honourably (according to their standards back then).

The story goes that when he had been sentenced to exile and was riding to the ship, he stopped and looked back at his home, and said: "Fögur er hlíðin svo að mér hefir hún aldrei jafnfögur sýnst, bleikir akrar en slegin tún og mun eg ríða heim aftur og fara hvergi." - meaning that because of the beauty of the hill and the scene he would not leave. 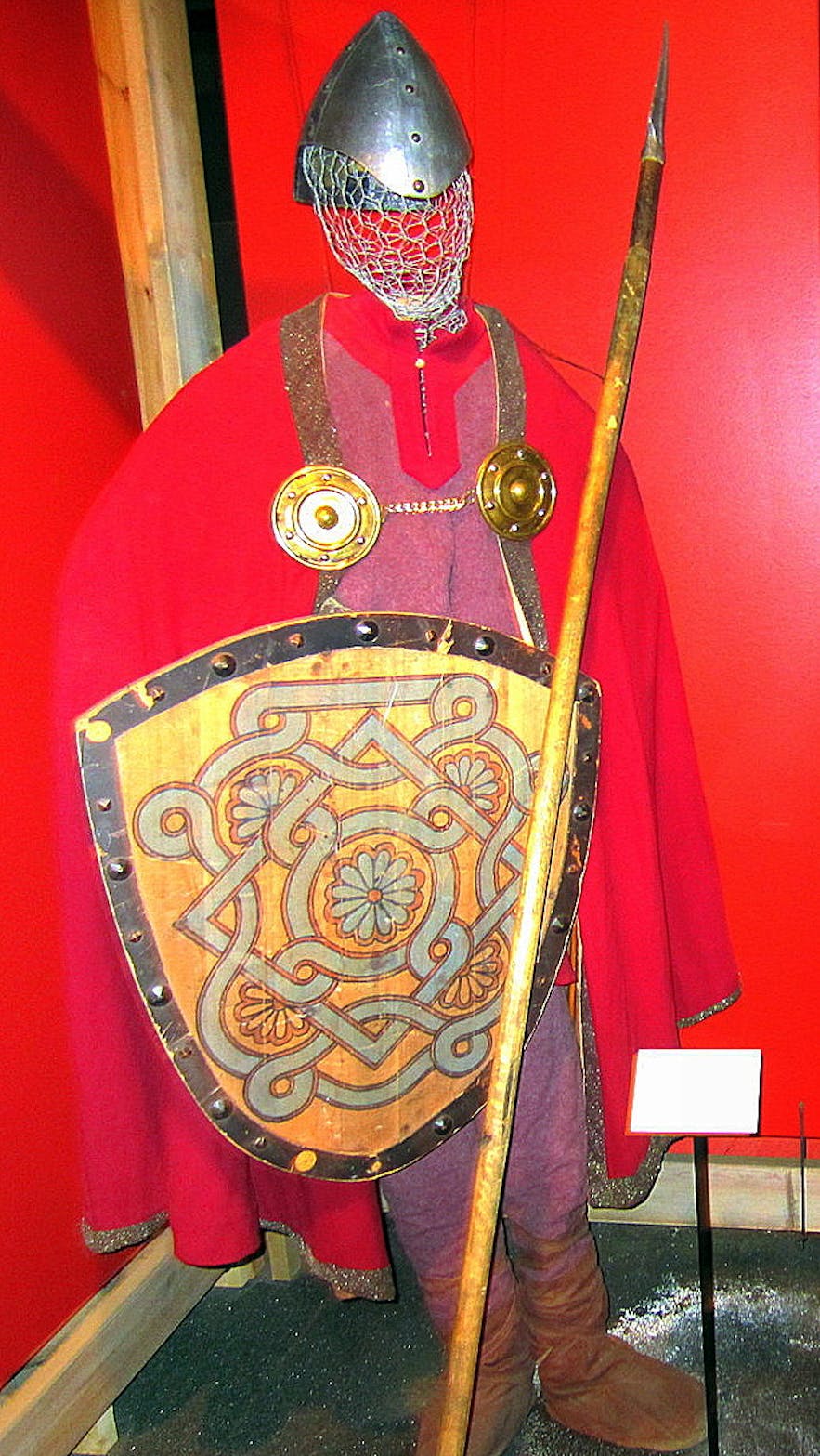 The costume of Gunnar at Hlíðarendi at the Saga Centre

One quote from the Saga of Njáll: "Thorgrím climbed up on the roof. Gunnar lunged at him with his spear from inside and Thorgrím tumbled from the roof. He then walked over to Gizur who asked: "Well, is Gunnar home?" Thorgrím answered: "All I know is that his spear is!" and fell dead to the ground."

What I would like to see at Hlíðarendi is a statue of Gunnar, I think that would be an additional attraction to visit this historic area. 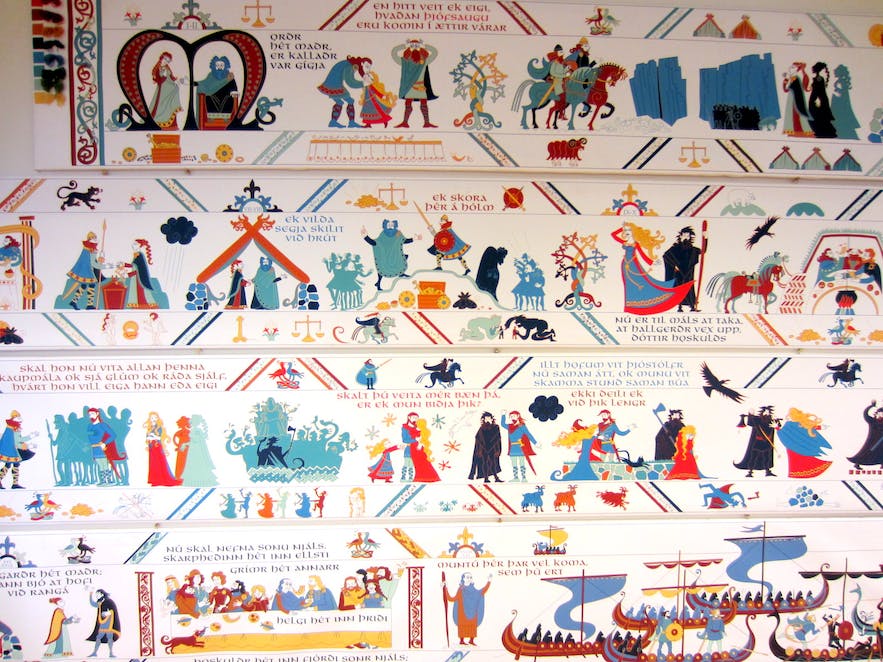 The goal is to sew the main events of the Saga of Njáll in the tapestry. Everybody can contribute to the sewing against a small participation fee. The Njálurefill project is now finished. 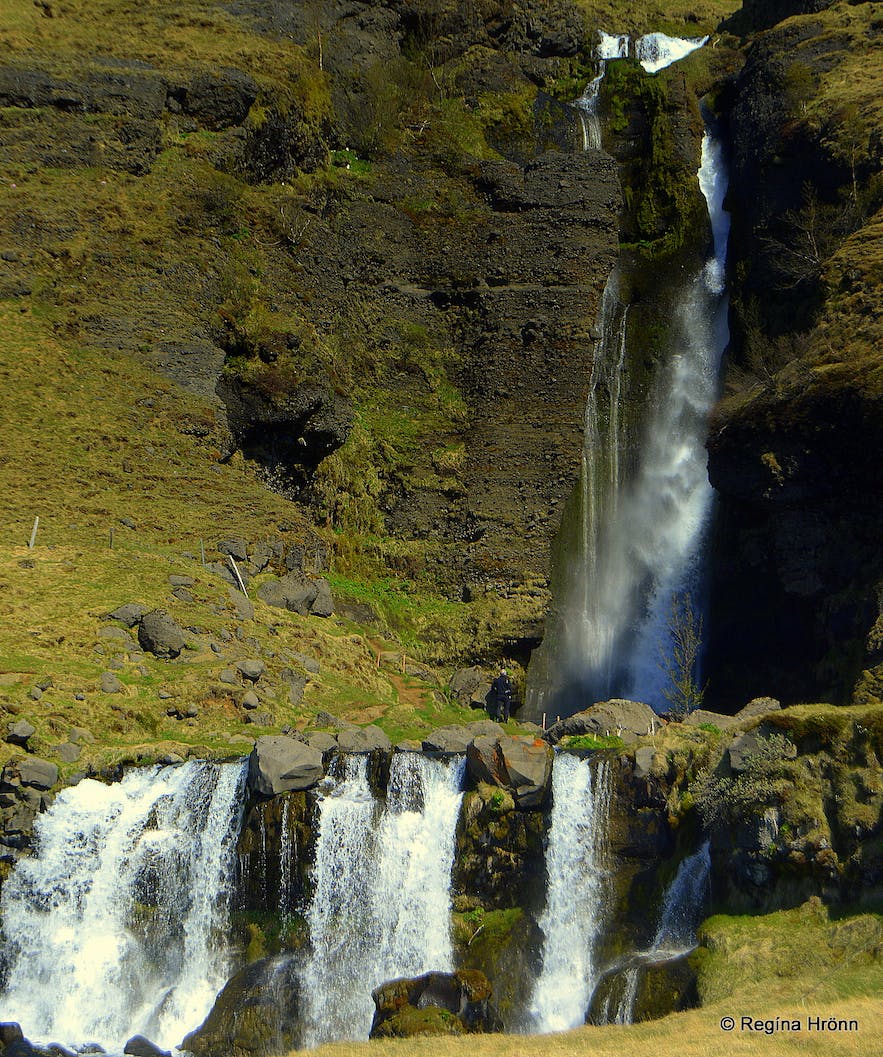 There is a beautiful waterfall in Fljótshlíð, Gluggafoss waterfall or the Window Falls - a very special waterfall, which I cherish and love to visit. The name, Gluggafoss, stems from the holes in the cliffs, through which the waterfall spouts. The river Merkjá has formed tunnels in the tuff rock and with times holes formed, looking like windows.

The appearance of Gluggafoss has changed with time as the tuff rock is so soft. It changed, even more, when the nearby volcano Hekla erupted in 1947. 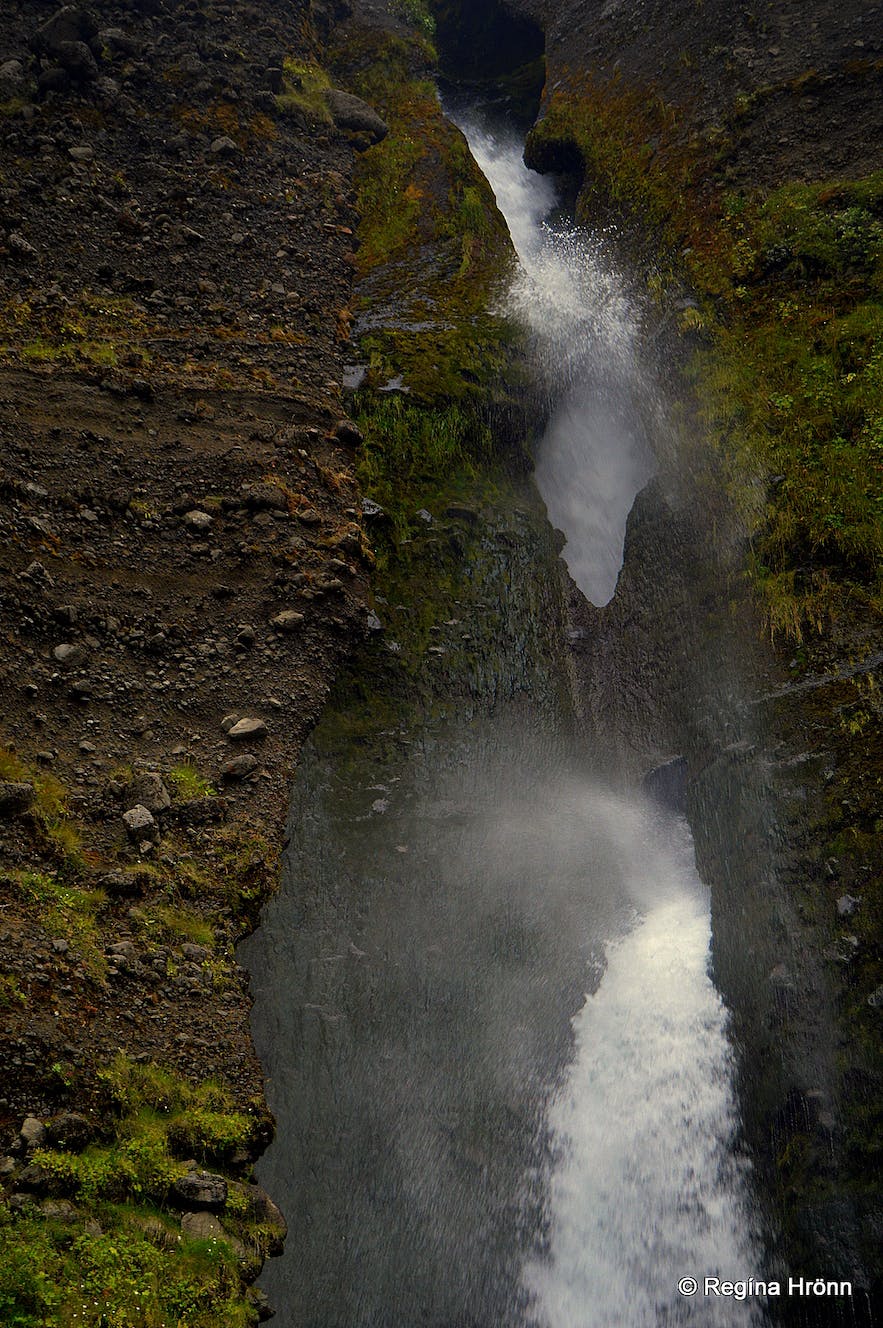 Gluggafoss is around 44-meters high and is declared as protected. I have written another travel-blog about Gluggafoss, as there are several other waterfalls further up, which I visited. It is a short, a bit steep, hike up a hill with beautiful views.

I had the opportunity to stay at Hotel Eyjafjallajökull in Fljótshlíð - the name of the hotel intrigued me and  I wanted to stay at a hotel named after the notorious volcano which caused havoc in air traffic back in 2010 - and which name no foreigner could pronounce ;)

Remember back when everybody was trying to pronounce Eyjafjallajökull with very dubious results - and to the endless merriment of us Icelanders :D 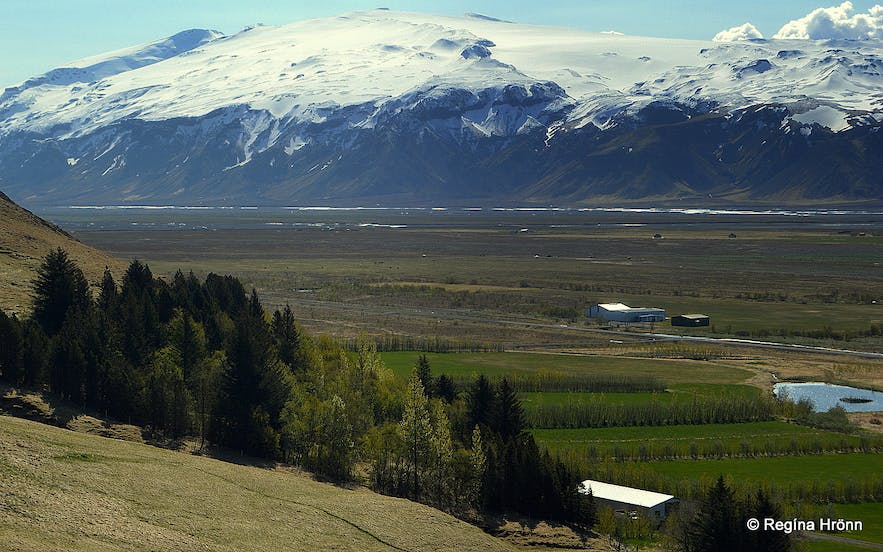 Eyjafjallajökull volcano is very close to the hotel which bears its name - thus the connection. You can see the volcano from the hotel - it is a beautiful view of the volcano across the green golf courses by the hotel. The hotel offers an 18-hole golf course and one can get golf lessons at Hellishólar.

We arrived at the hotel late and were happy to be greeted by such a beautiful room - I especially loved the pillows and bedspread in black velvet with the name of Hotel Eyjafjallajökull embroidered in golden letters. I think it is a beautiful touch and gives the hotel more class. 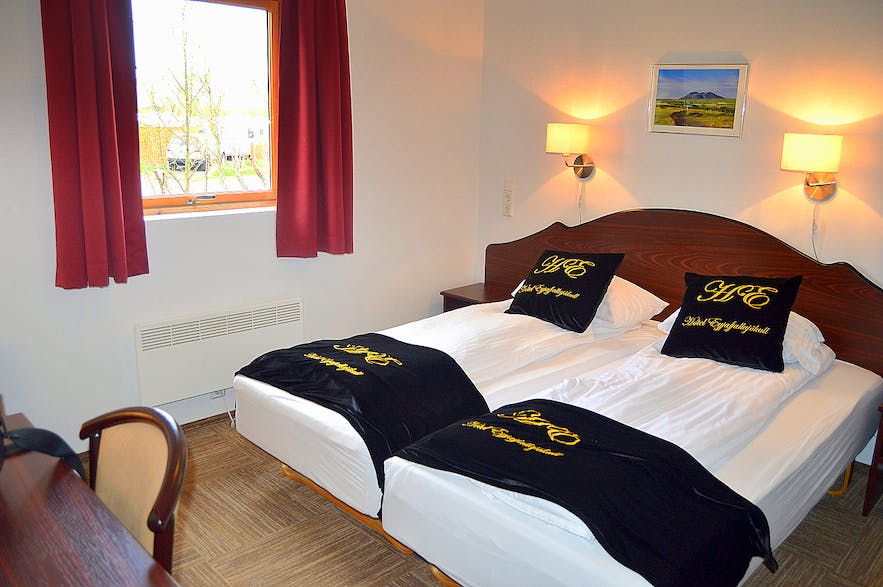 Our room at Hotel Eyjafjallajökull

There is free Wifi in the rooms and a flat-screen TV. Our room was en-suite and bathrobes were provided. All in all, there are 18 rooms in the hotel, so it is a small and cosy hotel in a lovely location.

There is sometimes entertainment at the restaurant and karaoke. And if you want to explore the vicinity of the hotel there are bikes for rent.

I had a peek into some of them and they look cozy and lovely. There is also a playground for children. I love such lively areas and was very happy with my stay at the hotel. 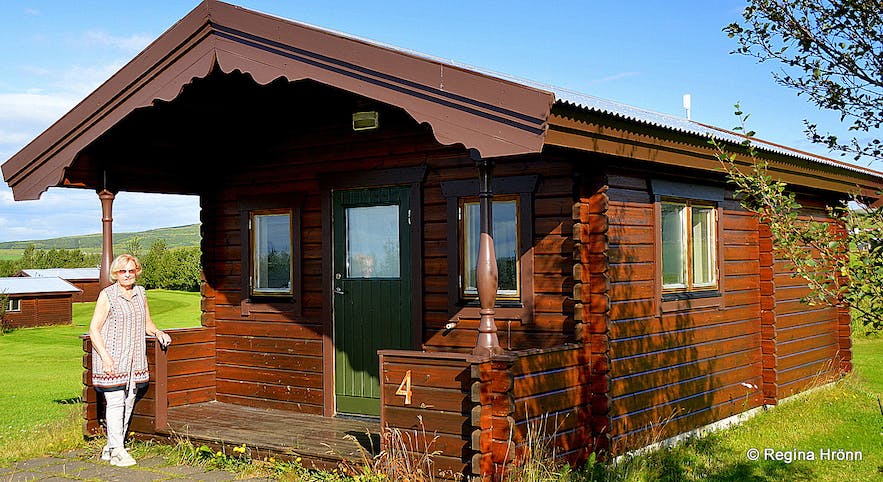 My mother and I stayed at a cottage at Hellishólar in the summer of 2020 and she loved the stay so much that she wants to rent the cottage again :)

The name on the sign for the hotel is Hellishólar, which is the name for the farm by the hotel. I would recommend visiting Fljótshlíð while exploring South-Iceland.

Seljalandsfoss waterfall is only 25 km away from the hotel, so it is a good choice for a first-night stay in South-Iceland.

And the ferry to Vestmannaeyjar - Westman islands is also close by - or a ca 33 minute's drive away from the hotel. That is where my mother and I were headed the following day. 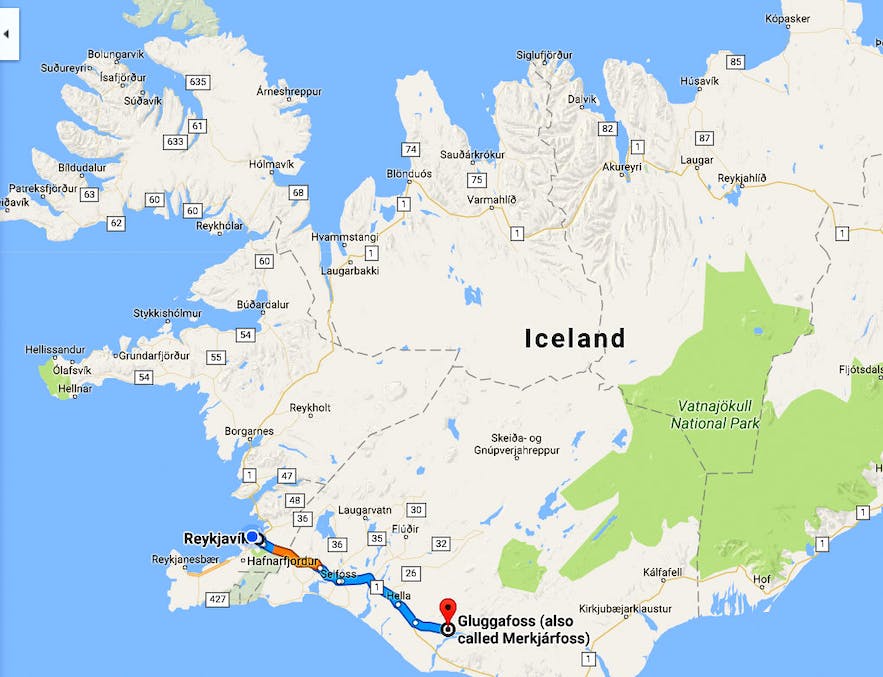 Hotel Eyjafjallajökull is only an hour's drive from Reykjavík and a 10-minute drive from the nearest village, Hvolsvöllur. You can rent a car in Reykjavík and visit the beautiful sights on the south coast.

You will have to get off ring-road 1 and turn onto road 261 for Fljótshlíð.

You can join a wonderful guided Viking and Saga tour of this area, where you will be shown the locations of the Saga of Njáll, the jewel of the crown of the Viking Sagas. The tour is called The Vikings & The Sagas | A Tour Through History.

I joined it and can recommend it.

Have a lovely time in Fljótshlíð :)