The Peculiar Knútsstaðaborg Lava Chamber in Aðaldalshraun in North Iceland

Knútsstaðaborg is an open lava chamber, 10 square metres in size. It is located in the Aðaldalshraun lava field in North Iceland, which is an approximately 100 sq.m. lava field.

In this travel-blog I am going to tell you about 2 of my visits to this special geological phenomenon. I am no geologist though, just a traveller in my own country trying to show you how diverse Iceland is.

Top photo: standing at the entrance of Knútsstaðaborg. 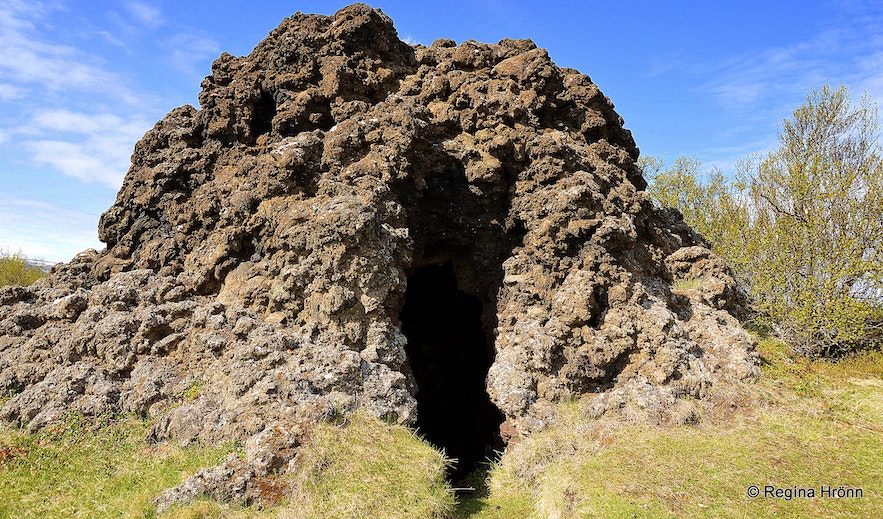 It is very interesting driving through this area, as in this lava field, you will see very strange lava rock formations which seem to have popped out of the landscape.

Lava fields are usually not heavily vegetated and moss seems to be about the only vegetation that can grow on lava. But here you will see grass and heather and shrubbery (birch trees).

These dramatic lava formations in Aðaldalshraun stem from an eruption approximately 2,200 years ago in Þrengslaborgir crater row at Mývatn. This same lava flow created Dimmuborgir and Skútustaðagígar pseudocraters at Mývatn. 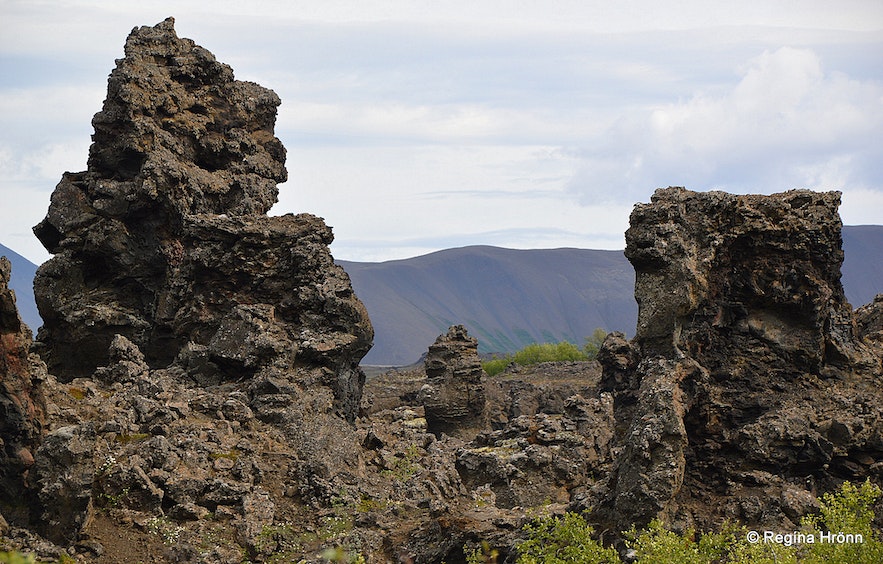 I cannot even begin to imagine how massive this eruption must have been, seeing that the lava flow reached Aðaldalur valley some 50-60 km away from Þrengslaborgir!

The formation of the extraordinary lava cliffs and pillars at Dimmuborgir in the Mývatn area is caused by lava ponds, i.e. the hot lava streamed over these ponds trapping the water underneath the lava.

Steam issued through vents in the lava and formed the pillars, which then remained standing even after the crust around them had crumbled. 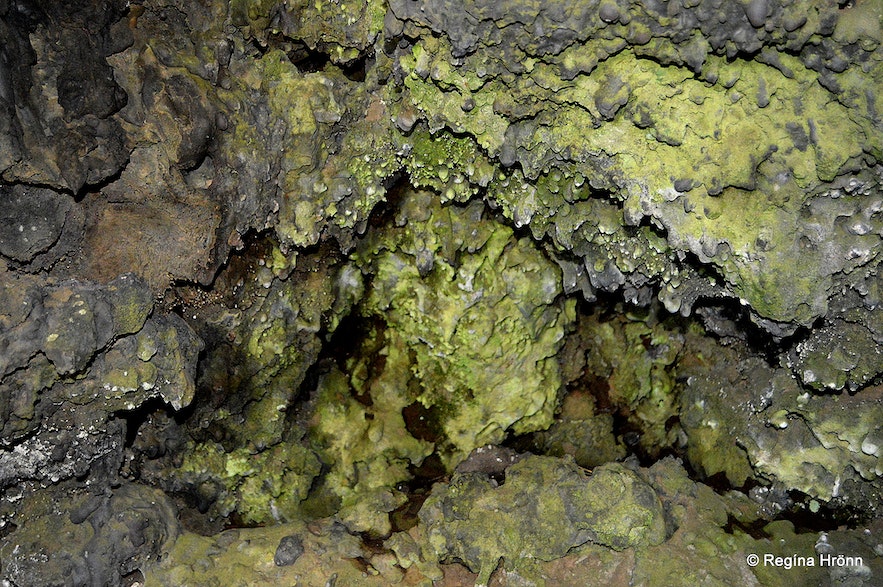 The lava chambers in the Aðaldalshraun lava field seem to be hornitos or spatter cones.

They are formed when the steam from the hot lava flow finds its way through the ceiling of the forming lava tunnel.

I have heard it explained in this way: "The steam managed to force itself through the lava ceiling and connected with the oxygen in the air and burned at a really high temperature.

The molten lava splashed up and solidified. Thus the steep spatter cones were formed". ​In this lava field, you will see strange lava formations all over the place.

Road 85 cuts through the lava field and I have seen many miniature versions of Knútsstaðaborg lava chamber when driving through this area on my way from Húsavík town towards Mývatn. 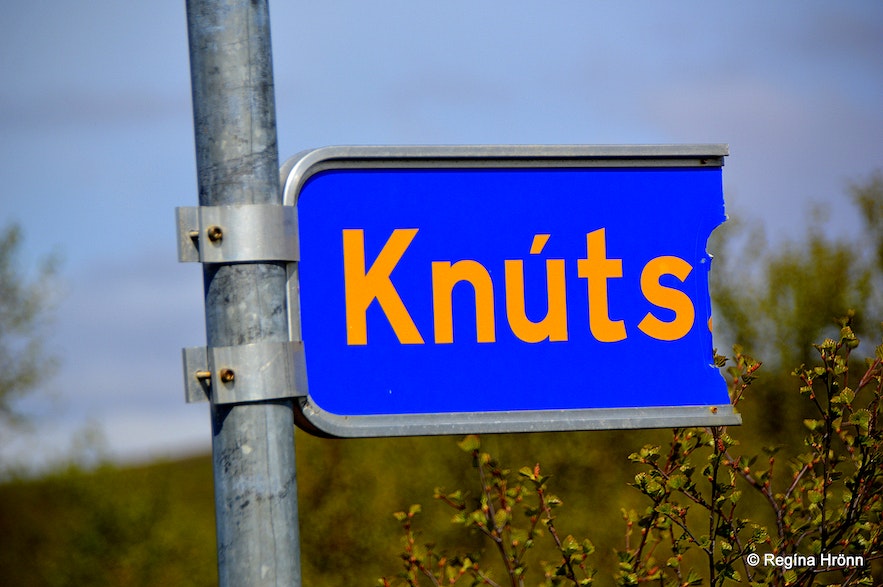 When I last visited Knútsstaðaborg (in the summer of 2019) the sign for the lava chamber was broken in half, it might not have been fixed, so keep an eye out for a sign on your left-hand side, broken or not.

If it is still broken then "Knúts" means Knútsstaðaborg.  It is not easy to find this lava chamber without the sign. 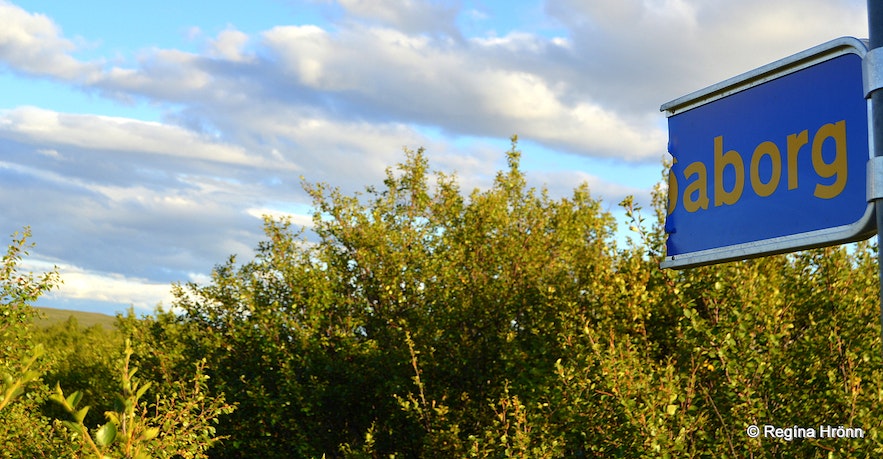 I have read warnings about there being a strong smell of sheep's wool inside the lava chamber as sheep seek shelter here in bad weather, but I think I might have been lucky during my visits as there has been no smell at all inside Knútsstaðaborg.

You can enter Knútsstaðaborg through a door-like opening in the lava on its side. A hole in the ceiling lets in some light to this strange lava chamber.

The lava chamber is around 4 metres high and wide enough for a couple of people standing inside. 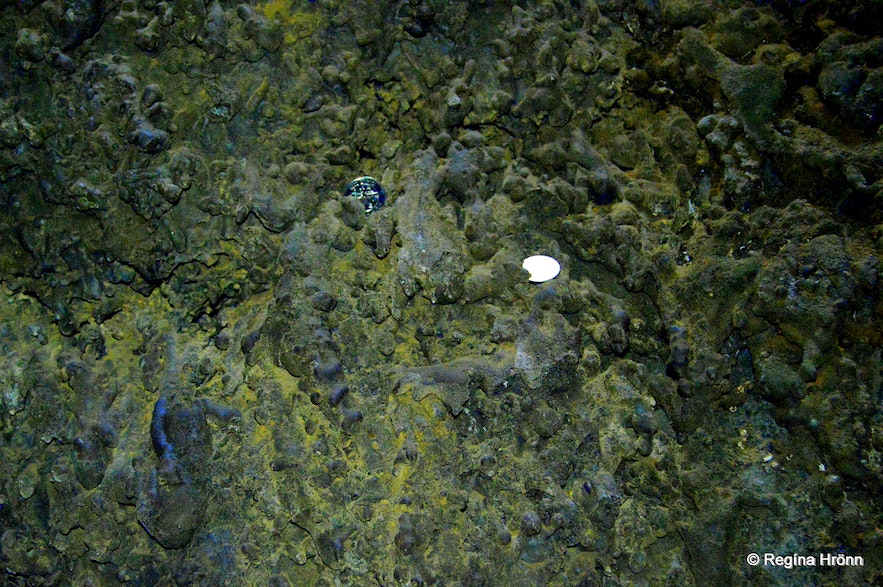 Coins in the lava inside Knútssaðaborg

When you enter the lava chamber you will notice such lovely lava walls and can see how the lava solidified when it splashed up. In between the lave, there are some Icelandic coins, mostly ISK 1, 5 and 10 krónas.

The coins are hidden all over the lava chamber, I noticed a myriad of coins - they are not to be removed though as this is a reminder of previous times - for good luck I think.

The new road number 85 was built some 30-40 years ago, and Vegagerðin - the Road Administration - made an opening in Knútsstaðaborg and used it as a coffee shed (ref. Ferðastiklur). 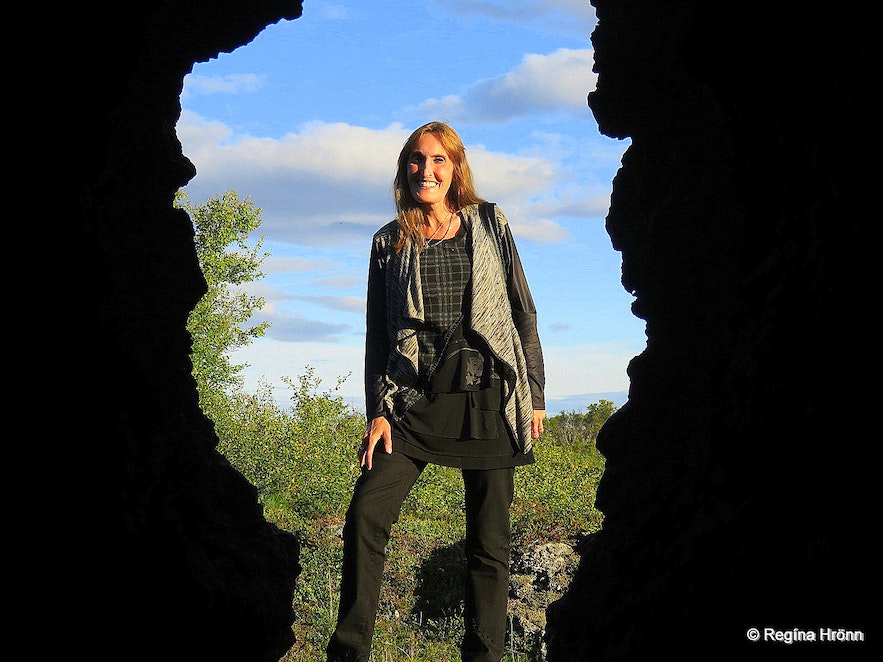 By the entrance to Knútsstaðaborg

According to the excellent book 155 Ísland, by the Icelander Páll Ásgeir Pálsson, some folktales claim that the sheriffs put their prisoners inside such lava chambers, while they were waiting for their punishment - and covered the opening. They then threw food to the prisoners through the hole on the top.

It gave me the chills while visiting Knútsstaðaborg thinking about the prisoners being locked inside this dark chamber. They got food, but there was no toilet... They were waiting for their punishment in the dark, so just imagine what they must have felt like.

In the photo below you will see my husband looking into the hole on top of Knútsstaðaborg. 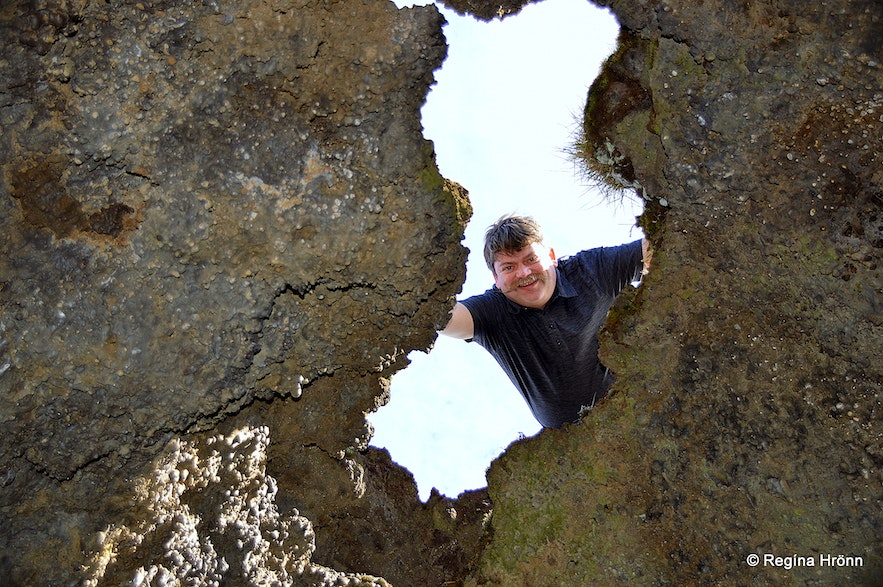 My husband looking down into Knútsstaðaborg

If you want to check out the surrounding area after visiting Knútsstaðaborg, be very careful as there are similar lava formations all over with a hole on the top, so one can easily fall in if not paying attention.

Many sheep have been lost in this lava field as many of these lava chambers only have a hole on the top and no other exit.

In my photo below there are many lava chambers with a hole on top hidden away, so you can see how dangerous it is to take a walk in this lava field. Who knows how deep and big the lava chambers are beneath the holes? 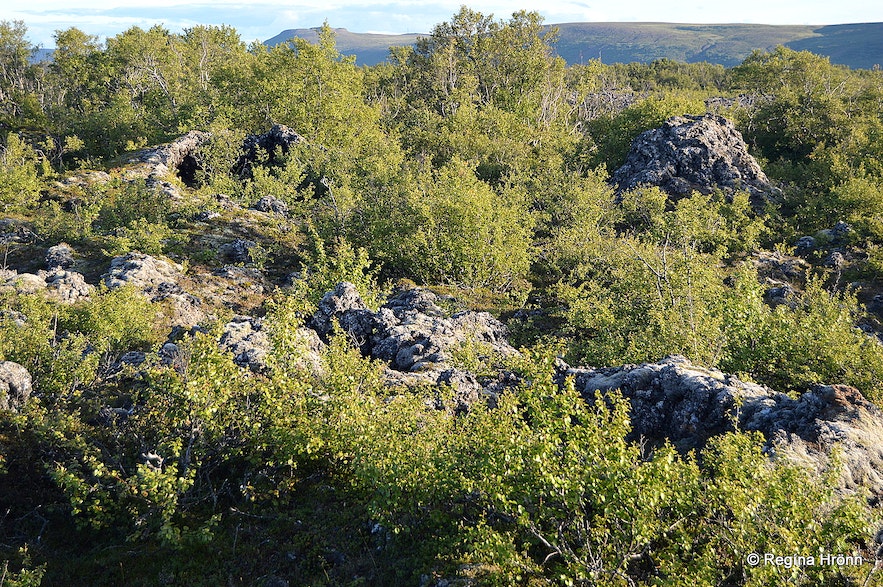 Steingrímur Baldvinsson, the farmer at Nes in Aðaldalur, fell into such an opening early in the 20th century and had to stay there for 2.5 days until he was rescued.

The chamber was 7-8 meters deep and had no escape but through the opening on top!

Steingrímur was a known poet and he killed time by writing poems during his lonely stay in the lava chamber. The hole, through which he fell, is close to the Húsavíkurflugvöllur airport, which is located on the northern side of Aðaldalur. 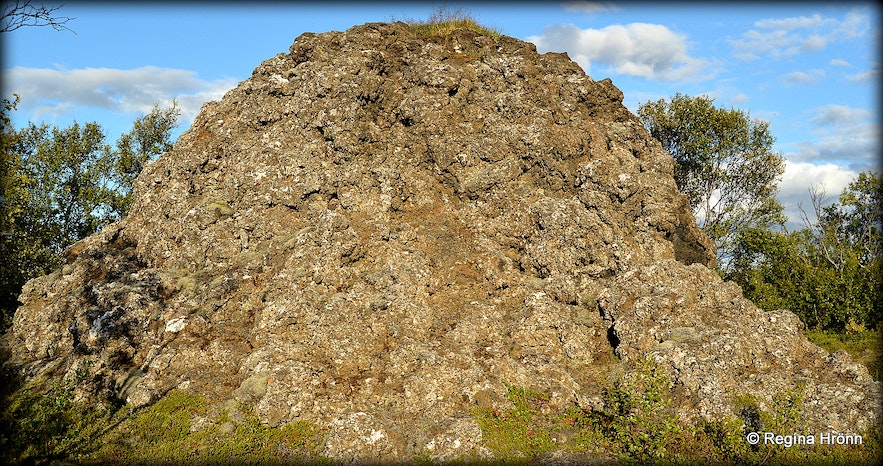 At the southern boundaries of the Aðaldalshraun lava field, the historic Grenjaðarstaður is located. I have written about the turf houses at Grenjaðarstaður in Aðaldalur in another travel-blog. Grenjaðarstaður was one of the best pastoral charges from the beginning of Christianity in Iceland until the 20th century, and my great-great-grandfather, Benedikt, served there for 30 years.

It is now a museum in the care of Þjóðminjasafnið - the National Museum of Iceland but run by the district museum of this area.

Give it a visit after checking out Knútsstaðaborg to see how the Icelanders lived in the olden times - you will also find a café at the museum, which is open in the summertime. 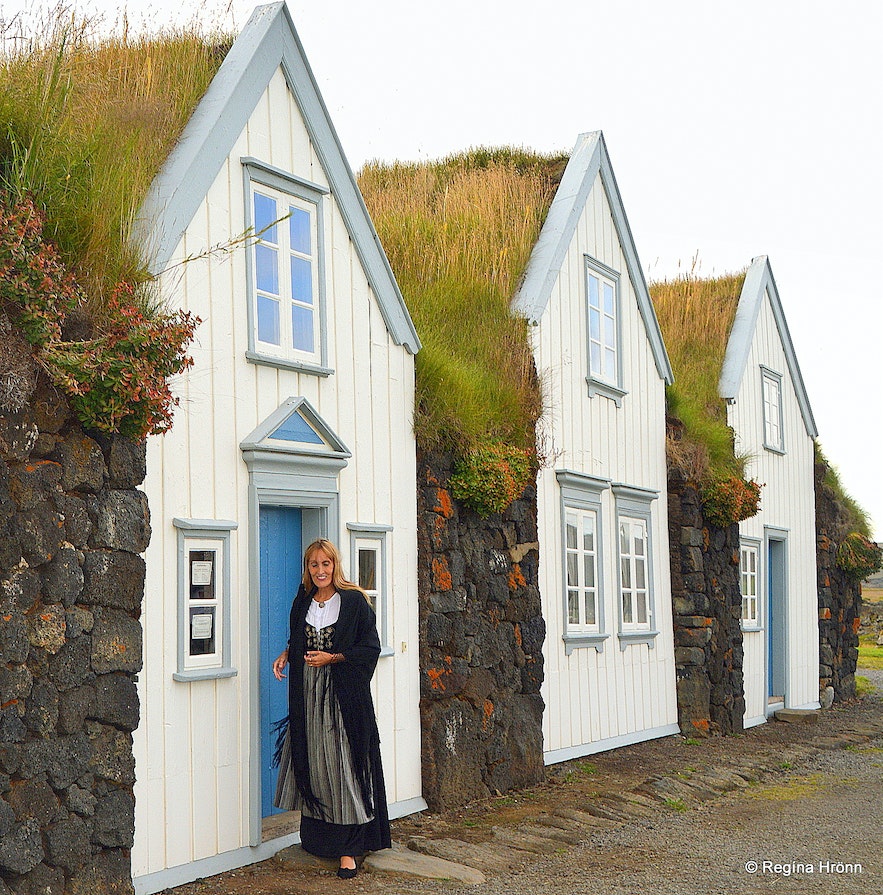 To visit Knútsstaðaborg from Húsavík drive south-west from Húsavík for about 15 minutes. Take the third road left after the airport, like you were driving to the farm Knútsstaðir.

But almost immediately, or after some 50 metres, take the dirt road on the right, which leads into the lava field. Drive for a short while and there will be a sign for Knútsstaðaborg on your left-hand side.